Although automotive technology has come a long way, it still can’t compete with the modern tablet. Whether you’ve got a brand-new car, or one that’s a few years old, you only have a few options to upgrade the internal electronics. You can purchase an aftermarket head unit, often at the cost of thousands of dollars once it’s installed. Alternately, you can use your existing tablet. This allows you to use GPS, Spotify, or any other apps you want while on-the-go.

What does it cost to install such a system? It’s probably cheaper than you think. All you need is an inexpensive tablet mount, and you’ll be able to take your tablet with you anywhere your wheels can take you. But before you choose one, it’s important to select a mount that will leave you in compliance with local driving laws. You aren’t allowed to hold the tablet in your hand, and it must be accessible in a manner that allows you to use it without distracting yourself from the task at hand.

We went hands on and found the best tablet mounts for any car. We’ll help you understand the differences between them, and pick the one that’s right for you.

iKross makes a number of accessories, both automotive and portable. They specialize in devices that make your mobile life easier. While this isn’t the only tablet car mount they make, this one is the most reliable, and the easiest to install. 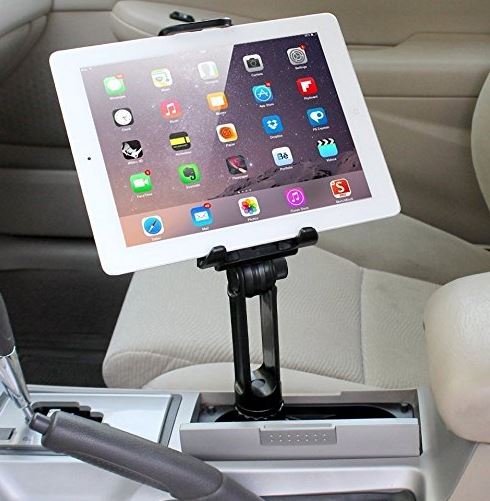 The iKross 2-in-1 gets its name from the fact that it includes brackets to attach both cellphones and tablets. The upper joint is easy to take apart, so you can switch from tablet to phone mode in a matter of seconds.

It is installed in your cup holder, something that almost all modern vehicles come equipped with. For larger tablets, the large double sided grips help to keep your device secure, even if you are driving on bumpy roads. 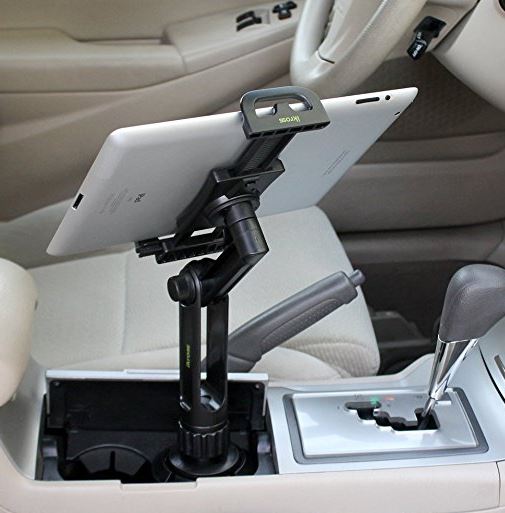 The tablet holder is quite large, allowing it to accommodate most standardized tablets. At the smallest setting, we were able to securely hold a 7” tablet as well as our Kindle. At the largest setting, we were still able to fit our 10.2” tablet in there. The bracket is very rigid, so we wouldn’t have any concerns about using a heavier tablet.

If you swap out the end, you can install the cellphone holder. This holder is suitable for virtually any phone. From the full-size iPhone 7+ or Galaxy Note series phone to the standard size Androids, all of our phones were held in securely. 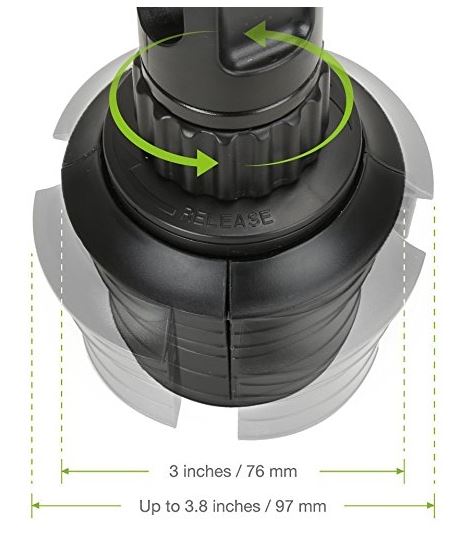 The base of the mount slips right into the cup holder, and is surrounded by a large rubber grommet to help keep things stable. We found it to be a fairly snug fit, which in important when it’s got a lot of pressure on it. Although there is very slight movement of the tablet while the vehicle is going over a rough road, we were surprised to see how sturdy it was.

One of the primary reasons this tablet mount is so sturdy is the thick dual-piece arm. It’s made from a thick, rigid plastic, allowing it to keep your tablet securely at eye level. 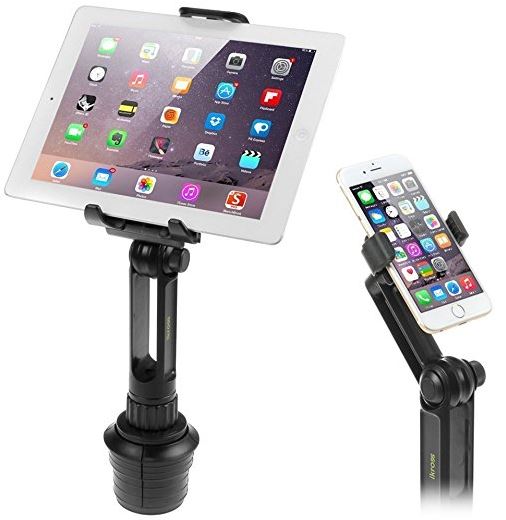 Because vehicles have different locations for the cup holders, it’s important that this tablet mount is adaptable to suit a variety of configurations. The upper arm tilts up to 90 degrees, allowing you to angle it in the position that is most comfortable for you to look at the tablet. It also pivots a full 360 degrees, so you can let your passengers be the DJ on a long road trip.

TFY makes a number of straps, holsters, and carriers for mobile devices. Even though they’re a smaller brand, they’ve taken the time to create something high quality and reliable. For that reason, many of their customers have reviewed one product, then purchase another. For this reason, we decided to give their Universal Car Headrest Mount a try. 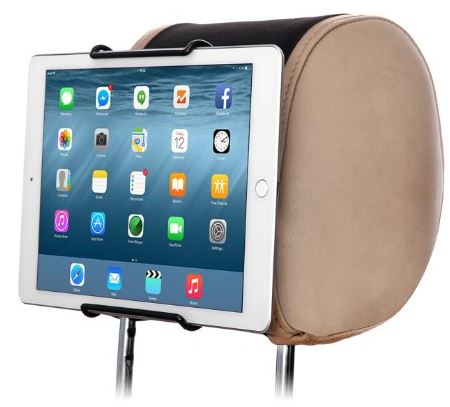 The TFY Universal Car Headrest Mount took its inspiration from the luxury sedans and SUVs of the early 2000s that installed LCD televisions in the headrests. Today, what once was an unaffordable luxury can now be enjoyed by anyone with a tablet and a few extra dollars. The headrest is composed of a large band of elastic style fabric that wraps around the headrest. Stitched into the fabric is a metal clip that can hold your tablet securely in whichever position you feel is best. 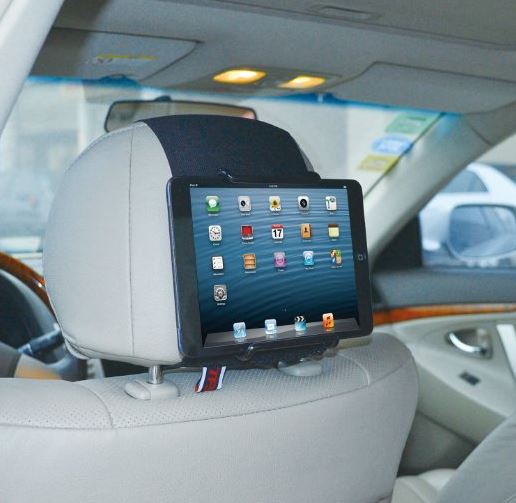 As the name implies, this mount truly is universal. The clips are quite thick, allowing it to accommodate older tablets that aren’t quite as thin as others. The range of the mechanism is quite wide, allowing it to accommodate tablets ranging in size from a tiny 6” model to a massive 9.7” iPad pro. The only thing that won’t work in this mount is the 12” iPad Pro, but almost every other model will work seamlessly.

The mount is also compatible with a wide range of vehicles. The elastic material is very stretchy, so it won’t matter how big the headrest is in your vehicle. But not all vehicles have removeable headrests. Our concern was that it wouldn’t be possible to install the elastic band if it wasn’t possible to pop off the headrest. Fortunately, it rotates 90 degrees. This allows you to slip the band around the side of the headrest, solving the compatibility issue. 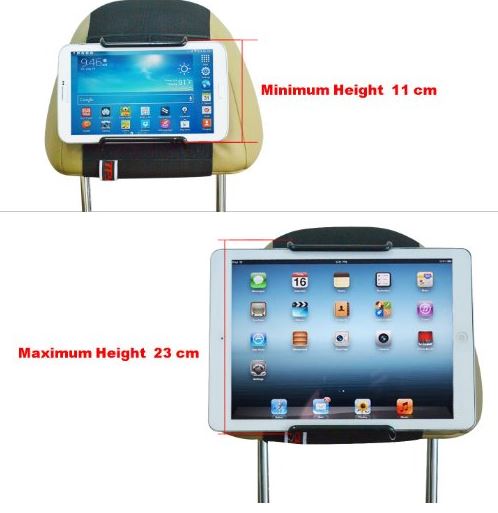 Because the elastic is so tight, the tablet didn’t move or bounce around at all. The tablet itself is actually raised above the headrest by two little arms, giving it about 2 inches of space in between. But these arms lay directly against the headrest, keeping it quite firmly in place. 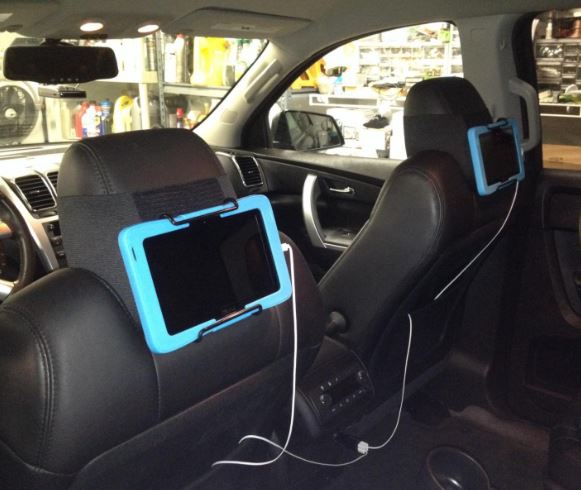 For most users, they will find that this mount is very ergonomic. You’ll only have to look straight ahead, and we found that even enjoying a movie for extended periods of time felt natural. Our one concern was for children who may be watching movies. There are no adjustable mechanisms that allow you to change the orientation of the tablet. If you wanted to tilt it down, you’d have to tilt the whole headrest. That may not be ideal for the driver.

Just to be sure, you might want to sit in the back seat for a moment and consider the placement of the head rest. This should give you an idea of whether this mount is suitable for use in your vehicle.

Satechi is an import company that is focused on bringing the best technology from overseas back to North America. Their product lines span a wide range of industries. Despite their differences, they all have on thing in common – solving a problem in a creative and unique way. 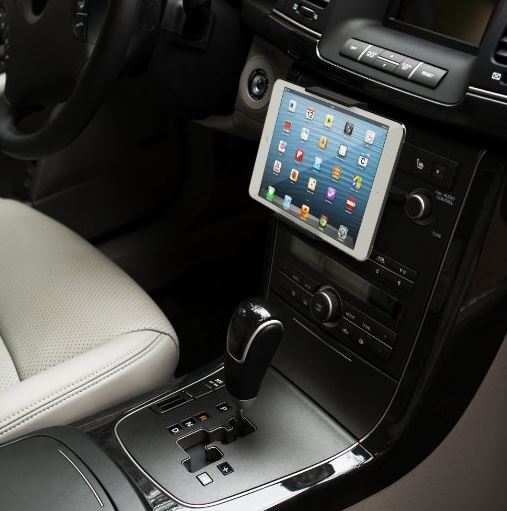 We really loved the Satechi Universal Tablet CD Mount. Having a tablet in your car isn’t just an easy way to enjoy the cover art on your favorite Spotify playlist. It’s a way to power up your in-car infotainment system. Instead of the proprietary manufacturer made systems (which tend to be disappointing at best) you can use your favorite iOS to Android device. The problem is the location. While your in-car system will be placed nicely in the dash, most mounts require you to stick them somewhere off to the side, which isn’t always ideal. The CD slot mount is a unique solution. Since your CD player is almost always located close to eye level, you can use that as the primary stabilization point and keep your tablet exactly where you want it. 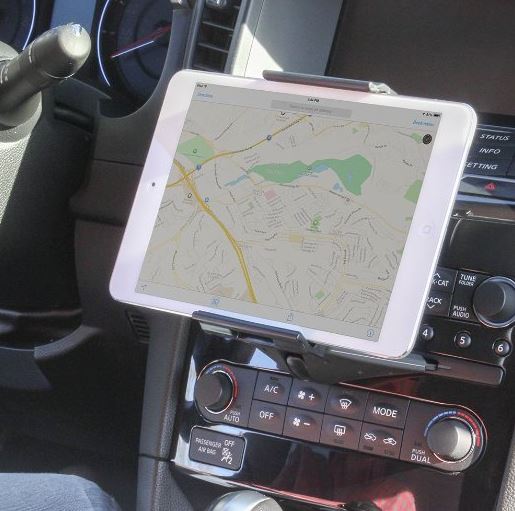 The two wide plastic clips can spread up to 7.68 inches wide, allowing them to accommodate any tablet between 5 to 11 inches in size. The clips are gently tapered in on each side, which provides a unique solution to the weight issue. Generally, the thinner the tablet the more lightweight it is. Because the clips are tapered, they have a firmer grasp on thicker tablets, helping to keep it secure.

The mount will slip into virtually any CD slot on the market. The only requirement is that there is 20mm of space on either side. Due to the internal dimensions of the CD mechanism, it’s unlikely that you’ll come across a cd player that will have buttons in this space.

In order to prevent damaging the internal CD mechanism, the clip itself only goes into the slot a few centimeters. Although we were a little skeptical of how much support this could provide, we were happy to find that it is very stable, even with a larger tablet. 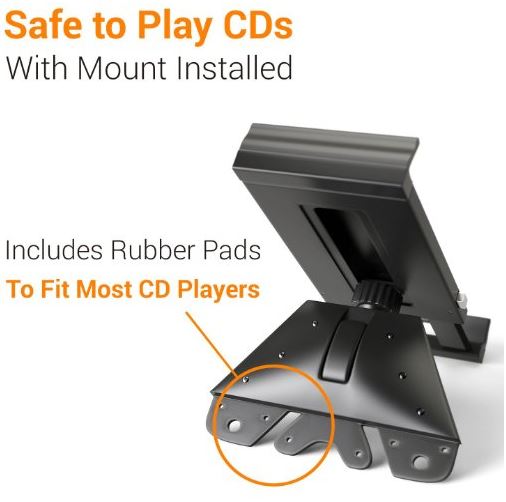 Ever look over at your dash to change the song? If you’re comfortable with that, you’ll certainly be comfortable with this CD mount. This is one of the most ergonomic, easy to use mounts we’ve come across. We felt much safer using this mount since it’s a very short distance between your tablet and the windshield, so you can quickly punch in GPS coordinates without having too much time away from the road.

Which Tablet Mount is Right for Me?

Every car is different, and it can be a challenge to find a tablet mount that suits your individual needs. Which one you choose depends on how often you look at the tablet, and how your vehicle is arranged. If your vehicle permits it, our first choice would be the iKross 2-in-1 Tablet Mount. Not only will it support both phones and tablets, but it’s unique 360-degree swivel head allows you to adjust it to the exact height you like. We find that this mount works best in vehicles that have front-mounted cup holders. If they’re in the center console, it would be less than ideal.

Without adequate access to cup holders (or if you just want to keep them free for beverages) the Satechi Universal Tablet CD Mount is a good choice. This would be our primary option if we wanted to use the tablet for GPS navigation or song selection during a road trip. Anytime we’re going to be occasionally glancing at the tablet while the wheels are in motion, it’s essential to have it mounted in such a way that you’re not moving your head too much.

Trying to keep the kids entertained during a long drive? The TFY Universal Car Headrest Mount is great for anyone sitting in the back seat. You won’t have to hold the tablet up all the time, making for a much more relaxing journey.

Planning to use your tablet for music on your journey? We all know that the tiny little speakers embedded in your tablets are nothing more than underwhelming. You might want to consider getting a Bluetooth FM Transmitter. These devices connect wirelessly to your tablet, and rebroadcast the Bluetooth audio signal to your FM stereo. This saves you from having to run an aux cable to the tablet. When you’ve got a mount that lets you position it wherever you think is best, you might as well have an audio system that doesn’t compromise your freedom.