Owning a Tesla – or any electric vehicle – is a rewarding experience. You’re helping the planet by driving a greener vehicle, and Teslas also offer impressive on-road performance. Today’s battery technology also provides for plenty of range. Unless you’re on a road trip, you can do all of your charging at home.

But when you use a home charger, you need to have somewhere to keep your cable. If you don’t have a proper wall mount or caddy, the cable will just be on the ground. It can get stepped on, driven over, and abused. One day you’ll plug in your car and nothing will happen. If you want to avoid this, it’s critical to own a good quality wall mount.

We’re about to review five of the best Tesla charging cable wall mount holders available. If you don’t have time to read the full review, here are the highlights:

Which one of these cable caddies is the right fit for your garage? To find out, we’ll have to look deeper into their design, installation, and features. After that, we’ll have a more complete picture. Let’s begin! 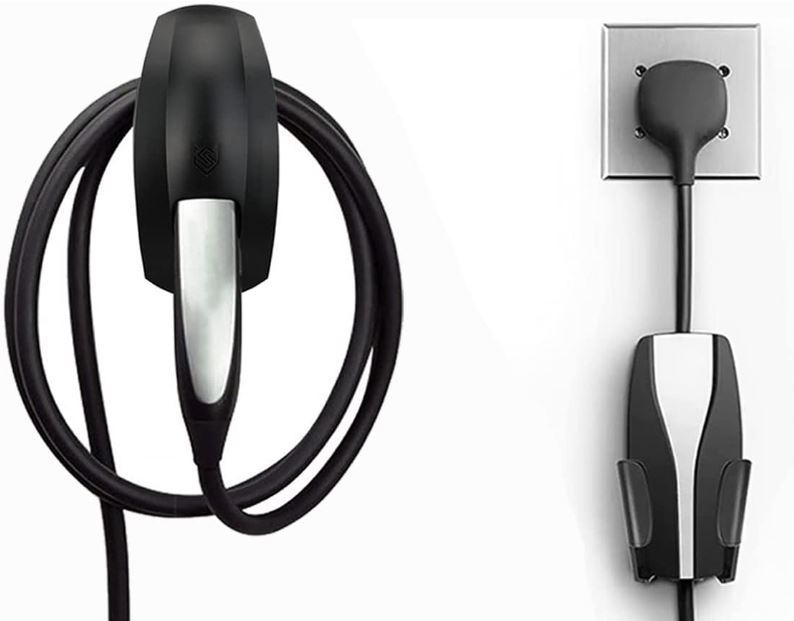 The Seven Sparta Tesla Charging Cable Holder is broad and fat. It’s constructed from a smooth black plastic, and has a wide, curved shape that arches out from your wall. In total, it measures 2.63 inches wide and 7.87 inches tall. Despite being made of plastic, it’s surprisingly strong. It can support up to 66 pounds, which is enough for any charging cable. There’s also a socket for your charging plug on the front, so your plug won’t be left dangling.

Installation is simple and straightforward. There’s a narrow mounting block with grooved sides that screws onto your wall. The cable holder itself has a matching recess in the back, which slides over the mounting block. Once it’s in place, it’s very secure, and won’t come loose easily. At the same time, it’s easy to remove if you want it to. Just lift the cable holder directly upwards, and it will slide right off the mount. So if you want to take it with you when you move, it will be easy to.

This cable holder will work with any EV charger. But it’s purpose-built for Tesla chargers, particularly the Tesla Mobile Connector. Along with the cable hook, there’s a frame for holding the Mobile Connector’s charge block. It’s a tapered rectangular frame, open at the top and bottom to allow cables to run through. There are two holes in the back of the frame, which you use to screw it into the wall. The kit includes a set of four screws and wall anchors. That’s everything you need to mount it and start using it. 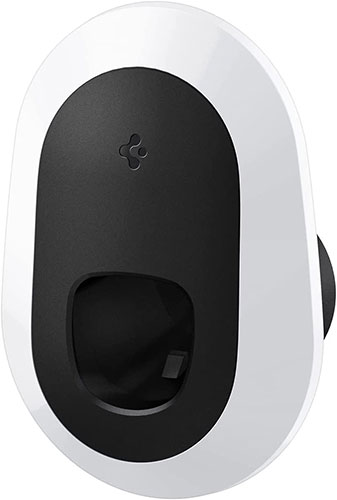 The Spigen Bespoke All-in-One Cable Organize Holder Wall Mount is fat and wide. The hook has a two-tone design, and is roughly oval, but narrower at the bottom than at the top. It’s black in the center, with either a white or a dark silver ring around the outside. It depends which version you order. 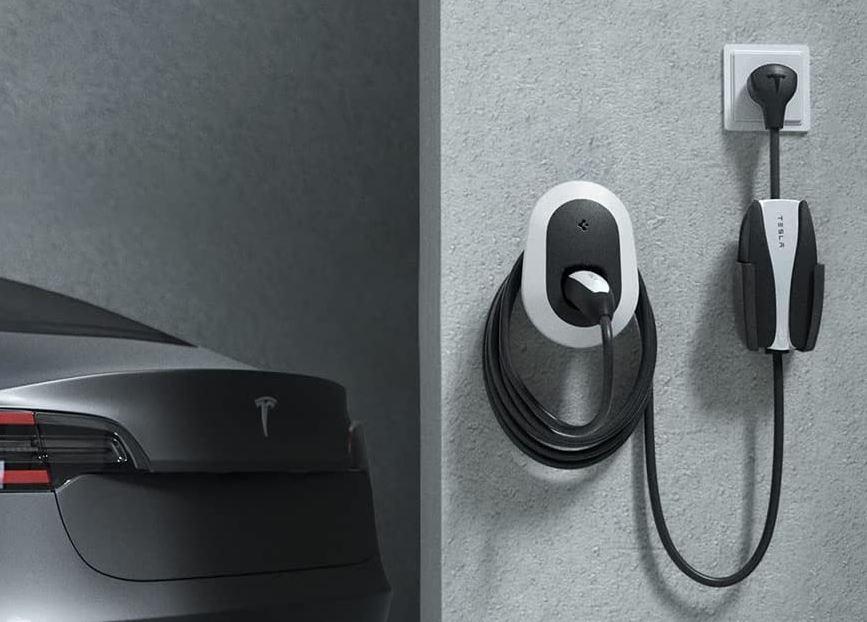 There’s a flat, narrow wall plate that screws directly to your wall. The main hook body slides over it, and sits firmly against your wall. It’s even easy to keep the head of your Tesla charger well-organized. There’s a socket in the front, and the locking tab will click when the plug is secured.

As with the Seven Sparta holder, the kit includes a mount for your Tesla Mobile Connector. It’s just a simple plastic frame, but it gets the job done. You also get a set of screws and anchors, so you don’t need to purchase any fasteners. 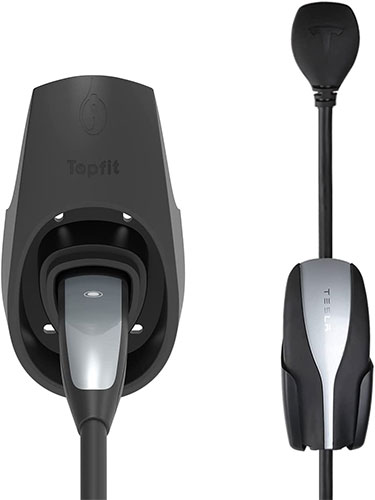 The BMZX Tesla Charger Holder Charging Cable Organizer is a wide black hook with a simple curved shape. It’s four inches wide at the widest point, and measures seven inches tall. In the front, towards the bottom, you’ll find a socket for inserting your charger plug. This socket is very secure, with a special built-in hook. In fact, you can’t actually pull the cable straight out. To remove the plug, you have to lift up on it to free it from the hook, then pull it out. 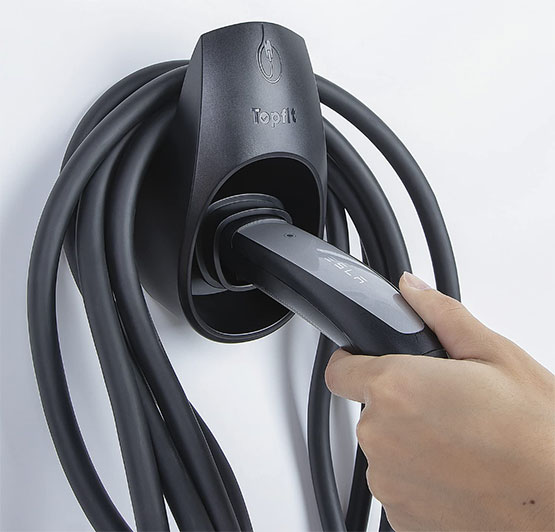 Installation is very simple. There’s a deep channel that forms an oval around the plug socket. Inside this channel are four holes for putting screws into your wall. There’s no extra mounting plate or assembly required. Then again, you have to unscrew the hook if you want to remove it temporarily.

The package includes a rectangular holster for the Tesla Mobile Connector. It’s made from a matching black plastic to the cable hook, and it also secures with four screws. A full set of screws and masonry anchors is included in the kit. 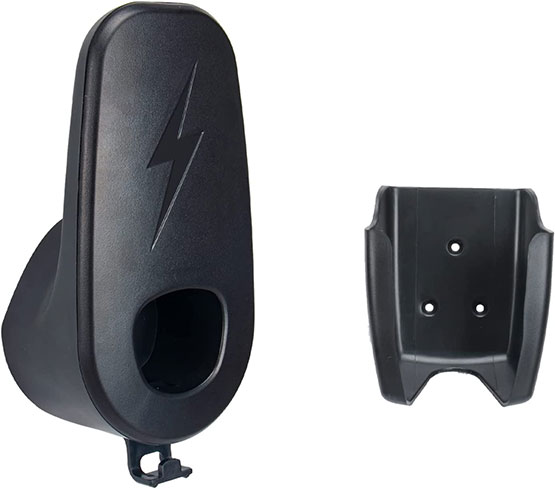 The Carwiner Charging Cable Organizer Wall Mount is constructed from a durable black ABS plastic. It’s broad at the bottom and slightly narrower at the top, with a curved, beveled profile. It measures 2.68 inches wide, 6.14 inches tall, and 1.97 inches deep. In the front is a socket that accepts a standard Tesla plug. 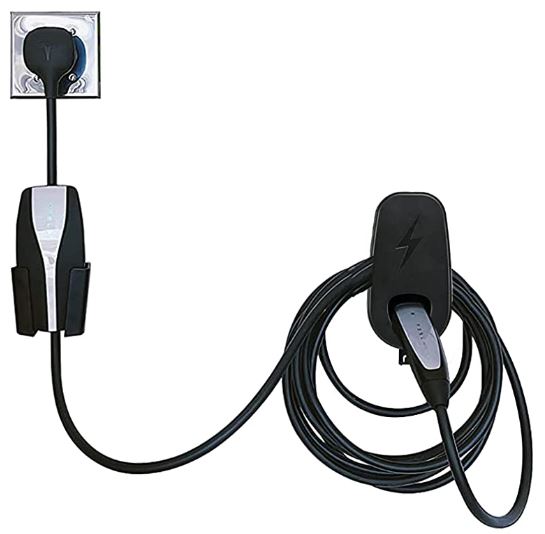 The standout feature of this wall mount is the little hook at the bottom of the housing. It’s not enough to support any serious weight. But you can hang a cleaning towel or similar lightweight object on it. You can even keep your key fob there so you always have easy access.

Instead of a mounting plate, this wall mount has a removable face plate. You take off the face plate and screw the main housing into the wall with four screws. It’s very secure, and the face plate snaps over the front. The face plate itself can sometimes pop loose when you pull out the plug. But it pops back into place in just a couple of seconds.

As with the last three wall mounts, the Carwiner mount includes a Tesla Mobile Connector mount. It attaches to your wall with three screws, and allows your cable to easily pass through. All of the necessary screws and anchors are included in the package. 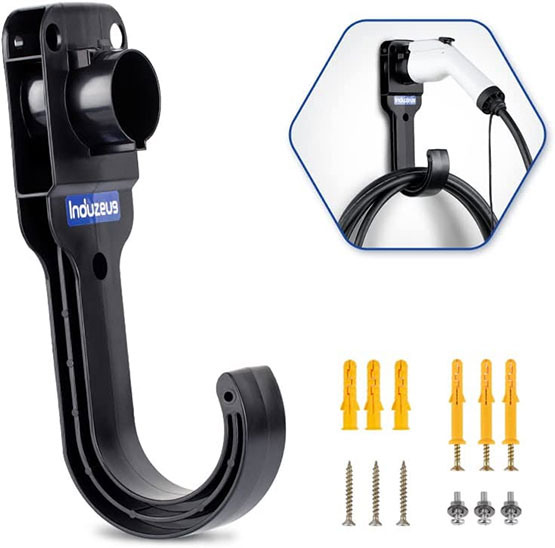 The Induzeug Charging Cable Holder for Tesla has the most unique design. Instead of fat and stylish, this is a barebones plastic hook. It measures 3.1 inches wide, 10.6 inches long, and 4.2 inches deep. Your cable hangs in the minimalist hook, which is at the bottom of the unit. At the top is a socket for your Tesla plug, which helps to keep you organized. The socket even has a tab inside, and retains your plug just like your car does. 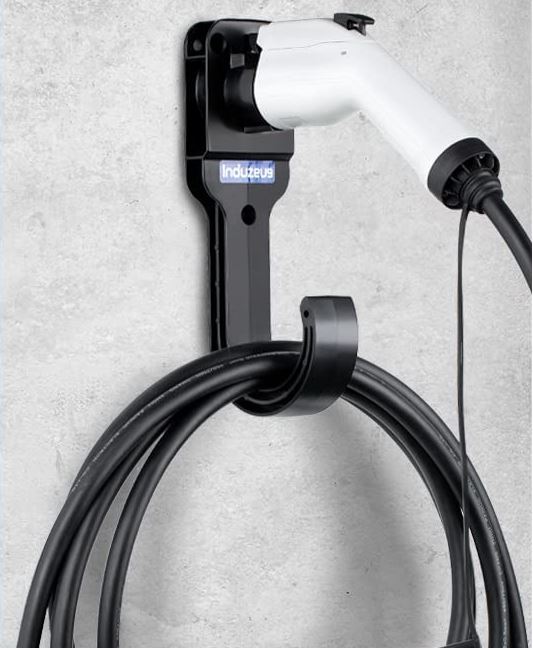 Installation is easy. Around the socket at the top of the hook, you’ll find three holes. Three screws and anchors are included, so all you’ll need is five minutes and a drill. On the downside, there’s no caddy for your Mobile Connector.

If you’re in the market for a new home charger, check out the Autel MaxiCharger. It’s a powerful, 240-volt Level 2 charger, and includes a cable, plug, and cable holder.

Any one of these cable holders would be a great way to manage your charging cable. But how do you choose between them? Here’s a quick summary of what we’ve learned.

We started out with the Seven Sparta Tesla Charging Cable Holder. This is a no-nonsense cable holder that can support an impressive 66 pounds. Even if you have an extra-long charging cable, you won’t have any issues. We also appreciated how easy it is to install, and the Tesla Mobile Connector wall mount is a big plus.

Next, we looked at the Spigen Bespoke All-in-One Cable Organizer Holder Wall Mount. This is similar in many respects, including the Mobile Connector mount. While it doesn’t have as high a weight rating, it is more aesthetically pleasing. The two-tone design adds a cosmetic touch you won’t get from many wall mounts.

After that, we checked out the BMZX Tesla Charger Holder Charging Cable Organizer. This organizer has an easy-to-install wall hook, which secures with four screws instead of two. The Mobile Connector holster also has four screws, which is probably overkill. Regardless, it’s both straightforward and very secure.

The Carwiner Charging Cable Organizer Wall Mount was fourth on our list. It’s one of the easiest to mount, thanks to the removable face plate. We also liked the built-in hook. If you tend to forget your car keys, it’s convenient to hang them right there in your garage.

Finally, we reviewed the Induzeug Charging Cable Holder for Tesla. It’s the most barebones option, but it’s by far the most affordable. It also takes up very little space, which is always a plus!