The PlayStation 5 has been out for over a year now, and some people still can’t find one. Thanks to global supply chain shortages, retailers’ shelves are bare. Millions of people have managed to snipe one online by following major websites. And by mid spring, Sony expects there to be no further shortages. So if you haven’t gotten a PS5 yet, chances are good you’ll be able to soon. But if you’ve already been lucky enough to buy one, you’re probably thinking about some upgrades. In that case, there are few better places to start than your PS5’s DualSense controller.

Your controller is the number one physical factor affecting your gameplay. And for the most part, the DualSense controller is very well designed. It’s ergonomic, it’s responsive, and it’s familiar to many generations of PlayStation owners. That said, console controllers by their nature are a poor way to input text. With a PC keyboard, you can type fairly quickly. Even a smartphone keypad is fast compared to the PlayStation’s interface. It can take a long time just to send out a single message using your controller’s thumb sticks. Depending on how often you use text chat, this may or may not be a concern. But if you use text chat frequently, a QWERTY keyboard can be a great upgrade.

Today, we’ll be reviewing two of the best PS5 controller keyboards available on today’s market. We’ll start by examining the Donop Wireless PS5 Controller Keyboard. This is a molded keyboard that hugs your controller’s curves, and boasts a built-in speaker. Next, we’ll look at the FYOUNG Wireless PS5 Controller Keyboard. This is a rectangular wireless keyboard that doesn’t block your mic port. But those are just the basic physical features. To truly understand how the two keyboards operate, we’ll have to look a little bit closer than that. We’ll look at the controls, the pairing functions, and the power supply, among other factors. After we’ve given both keyboards a thorough examination, we’ll be prepared to pass a fair judgement. Let’s begin, and see where this leads us! 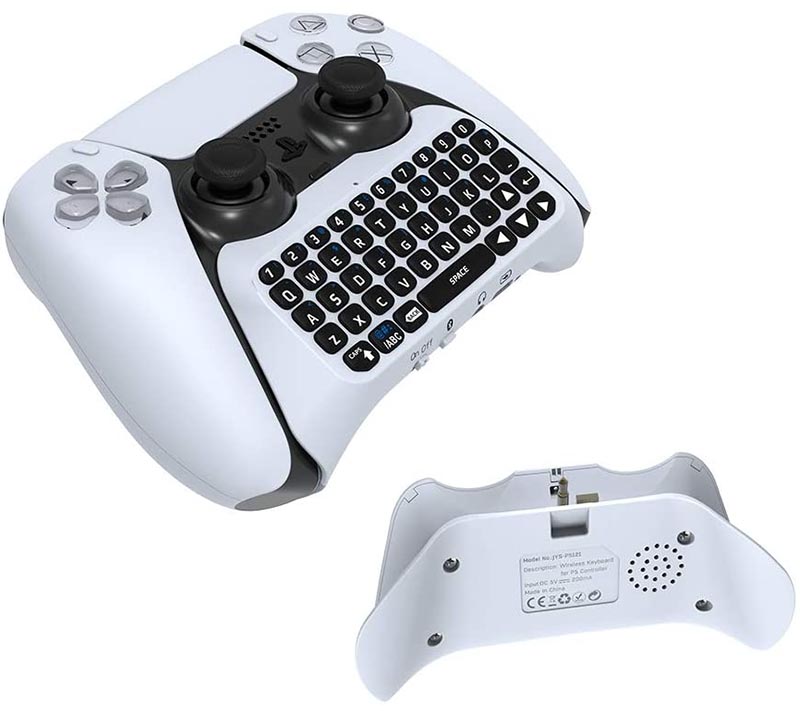 The Donop Wireless PS5 Controller Keyboard is constructed from white plastic, matching the DualSense controller housing. It has a smooth finish, and it’s easy to keep clean by wiping it with a damp cloth. The overall weight is 4.4 ounces, about the same as a McDonald’s burger patty. You’ll feel that it’s there, but it doesn’t add a ton of bulk to your controller. All in all, we found that it did not throw off the balance. You can order the Donop keypad in a one or a two-pack. So if you’ve got two PS5 controllers, both players can enjoy the benefit of a keyboard. 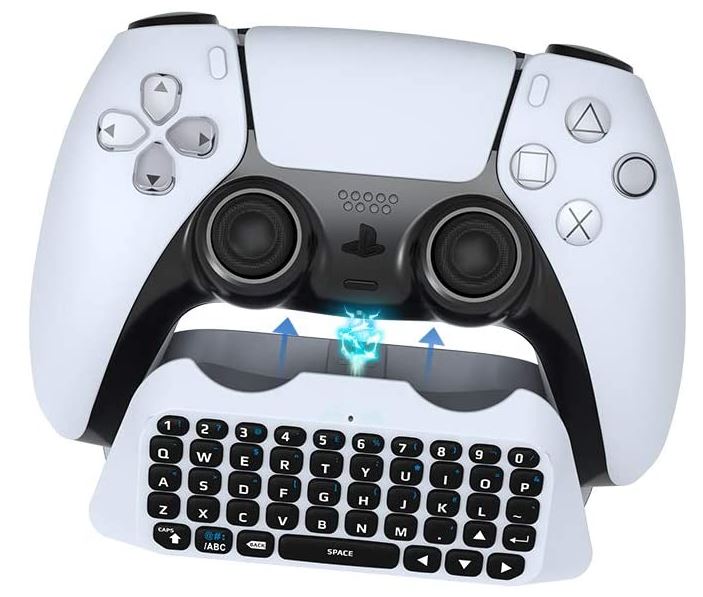 The keyboard housing is molded to fill out the gap between the controller grips. It perfectly hugs the bottom of the controller, as well as the insides of the grips. When it’s pressed into place, the bottom of the controller is closed out, which makes it look bulky. However, the back side of the keyboard is recessed, so you still have a curved grip for your hands. It secures in place by inserting into your USB Type-C and 3.5mm aux ports. You don’t need any clamps or other attachments to hold the keyboard in place. The plugs also support some connectivity, which we’ll talk about more in a second.

The keyboard surface is a standard QWERTY layout, including the number key row at the top. You also get return, space, arrow, and backspace keys. In addition to that, there’s a caps lock key, which is self explanatory. There’s also a function key that switches to a second input mode. Using that key, you can enter most common symbols. This makes it easy to enter passwords without bringing up the on-screen keyboard. The buttons themselves are black, with a rubbery feel that’s comfortable on your thumbs. To the front of them, there’s an LED indicator, which lights up when the keyboard is connected. 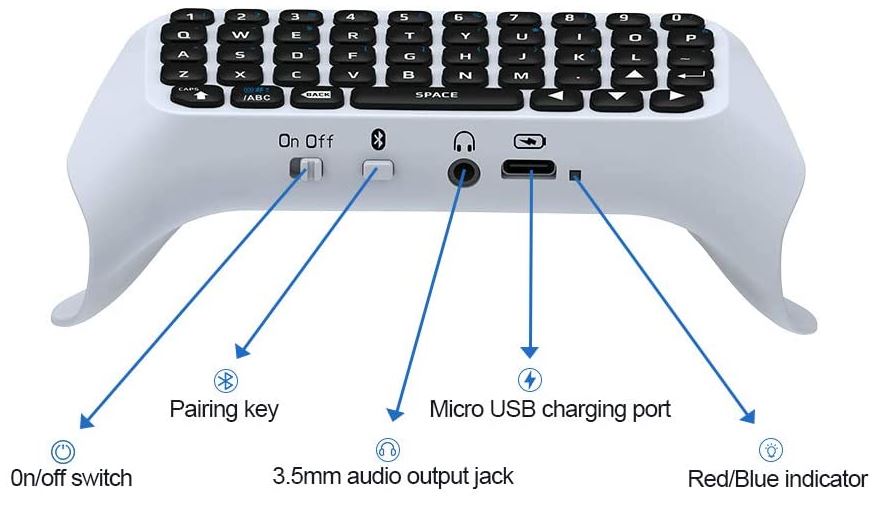 On the bottom of the Donop keyboard, you’ll find the controls, as well as a couple of useful ports. To begin with, there’s a power switch to the left. Keep in mind that this is for the keyboard, not your controller. In order for things to work, both your keyboard and your controller need to be powered on separately. Next to the power switch, there’s a Bluetooth button, which activates the pairing mode. Next, there’s a 3.5mm aux port, followed by a 3.5mm charging port. Finally, there’s an LED indicator at the far right.

So, we know how the Donop keyboard is put together. But how do you put it to work? Despite the USB Type-C connection to your controller, it actually connects to your PS5 via Bluetooth. Once you’ve paired it with your console, though, you’ll also need to pair it with your controller. During the process, you’ll be prompted to enter a passcode on the keyboard. You’ll have to do this twice within 30 seconds, and the system will successfully pair. You’ll know you’re paired when the top LED lights up green. Once you’ve paired for the first time, the keyboard should pair automatically every time it’s turned on. If it fails to pair, this can usually be fixed by turning the keyboard off, then on again. That said, on rare occasions, you might have to repeat the pairing process. 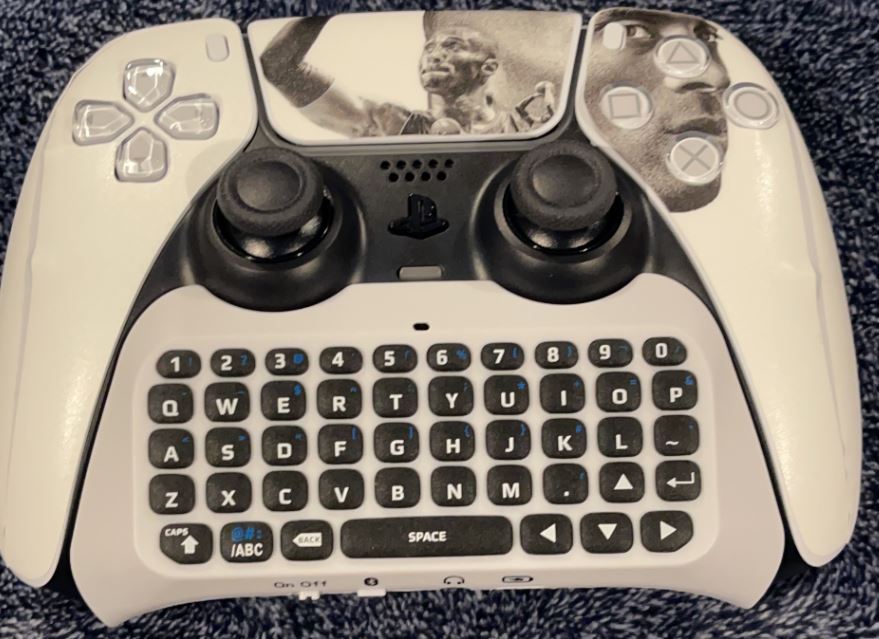 The keyboard has a built-in rechargeable battery, which lasts about as long as the PlayStation’s controller battery. This makes things simple. Whenever you need to charge your controller, just charge the keyboard. You can also charge while you’re playing, using a USB Type-C charging cable. Keep in mind, though, that you can’t play and charge with both the keyboard and the controller. You can play and charge with one or the other, or switch the cord back and forth. But if both are plugged into the console’s USB ports, they won’t pair correctly.

On the back of the keyboard, you’ll find a built-in speaker. This speaker will play certain in-game sounds, which is meant to improve immersion. It will automatically shut off if you’re using a headset. To use a headset, just plug it into the 3.5mm aux port on the bottom of the keyboard. This is a simple pass-through port. Your headset will register as if it’s been plugged into your controller as normal. 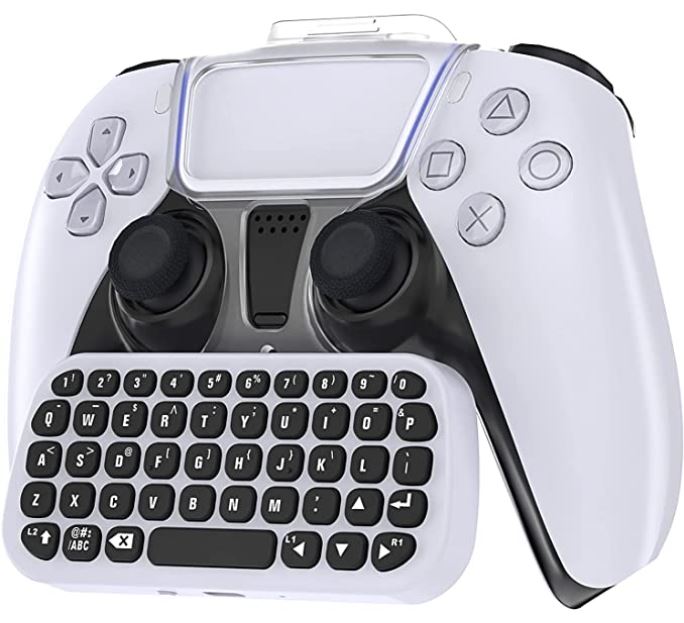 FYOUNG is well known for their high-quality gaming accessories. Over the years, we’ve reviewed several, such as their dockable Nintendo Switch OLED case. Because of their track record, we were excited to review the FYOUNG Wireless PS5 Controller Keyboard.

This keyboard is also white in color, matching the PS5 controller housing. It’s rectangular in shape, with slightly rounded corners, and a slim profile. The way it’s positioned is slightly higher than the grips, so it’s easy to work the keys with your thumbs. The positioning is similar to a smartphone, so it’s a familiar position for most people. The overall weight is five ounces, just a hair heavier than the Donop keyboard. That said, it’s actually better balanced. This is because of the way it attaches to your controller. Instead of sticking into your USB and 3.5mm ports, it mounts with a plastic bracket. This bracket wraps over the top of the controller, and accounts for a lot of the weight. 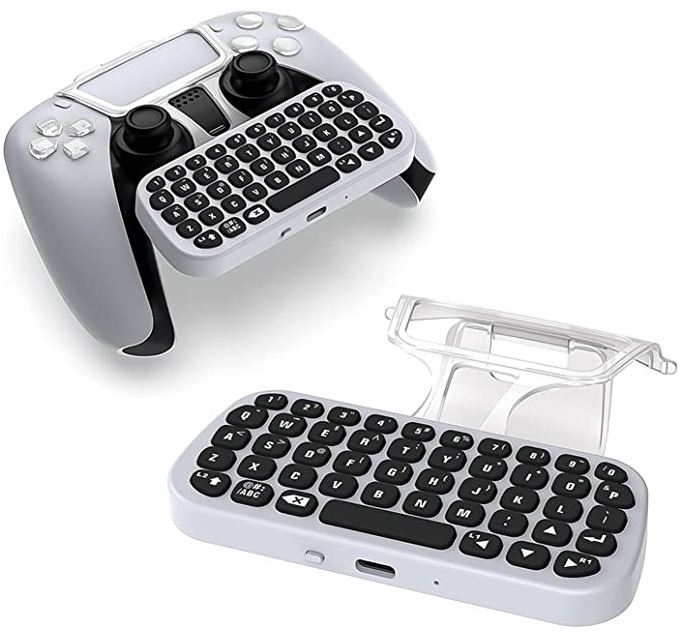 Just like the Donop board, this is a complete gaming keyboard. You get the QWERTY keys, number keys, and arrow, control, and backspace keys. There’s also a function key, so you can input a variety of symbols. This is great for in-game chat, as well as for entering passwords with unusual characters.

On the front of the keyboard, you’ll see a power button towards the left. At the center, there’s a USB Type-C charging port. Finally, there’s an LED indicator on the top surface, just above the number keys. This will illuminate when there’s an active Bluetooth connection. As far as physical design goes, that’s pretty straightforward. And in the case of this keyboard, that’s all there is to it. 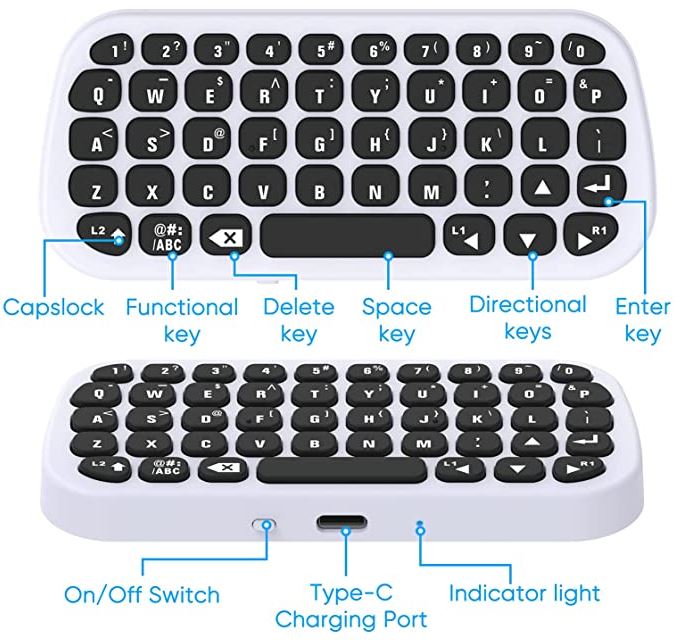 Like the Donop keyboard, this one connects to your PlayStation via Bluetooth. However, there’s no actual Bluetooth pairing button. When you turn the keyboard on, Bluetooth mode will automatically be activated. This simplifies matters and removes a step from the process. Other than that, the pairing process is more or less the same. Along the same lines, it will be automatic after the first time you’ve paired. And if you have any issues, they can usually be resolved by powering the keyboard off and on again. 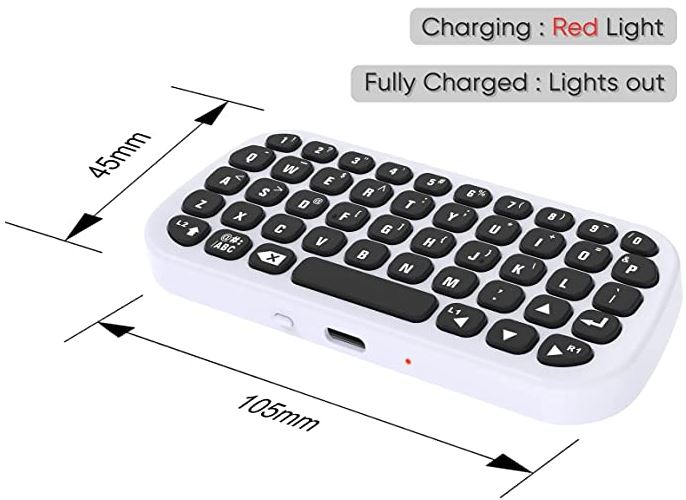 Another thing that works similarly is the charging process. You can’t charge the keyboard and the controller simultaneously while you’re using your console. However, you can charge one at a time while you’re playing. You can also charge them simultaneously when you’re not actively using your PS5. When charging, the LED light on the bottom of the keyboard will light up red. When the battery is fully charged, the light will go out again. That lets you know you’re ready to get back in the game.

Because of the way the FYOUNG keyboard mounts, it doesn’t block your controller’s 3.5mm headphone port. You can plug in most wired headsets without the need to use a pass-through port. This doesn’t really make much difference in terms of performance. But it’s one less potential point of failure, which is always a good thing.

So, what is it that separates these two PS5 controller keyboards? Let’s go over what we’ve learned. The Donop Wireless PS5 Controller Keyboard has a sleek design that meshes perfectly with the DualSense controller’s form factor. It’s easy to set up, and it allows a pass-through connection from your wired headset. The built-in speaker was another excellent touch.

The FYOUNG Wireless PS5 Controller Keyboard, while it isn’t molded, is smaller. It’s also slightly better balanced, thanks to the over-the-top mounting clip. Then again, the clip can be obtrusive, and there’s no built-in speaker. But the overall simplicity was much appreciated.