If you’re a console gamer, you know how important it is to keep your rig in good condition. Let your console get caked with dust and overheat, and you’ll soon be in the market for a new one. On the other hand, if you treat your console right, it can last practically forever. Just ask anyone who’s still running an original Nintendo from the 1980s!

To be fair, the Xbox One has an unfair reputation for overheating. This dates back to the Xbox 360 and its notorious “red ring of death” failure. In fact, the cooling issues with the Xbox 360 were resolved within a year. So even most 360 consoles should be just fine without an external cooling system. That said, any additional cooling is certainly a good thing. The cooler your console stays, the less the risk of damage.

Next, we’ll review the FYoung USB Cooling fan for Xbox One X. Once again, its function is in the name. This fan is designed for the Xbox One X. Finally, we’ll examine the Mutop External Cooling Fan for Xbox One. In case there’s any confusion, this fan is designed for the original Xbox One. Let’s dig deeper, and see what we’ve learned about each of them!

Before we continue, it’s important to address why you might – or might not – want to use an external cooling fan. Let’s start by stating the obvious: the Xbox One was made by professionals. It’s a powerful computing system that produces a lot of heat. Because the designers are professional engineers, they took this into account. There’s a powerful internal cooling fan and plenty of vents. Under ordinary circumstances, this should be all you need. If it wasn’t, you’d see constant stories of people’s Xbox One consoles overheating. 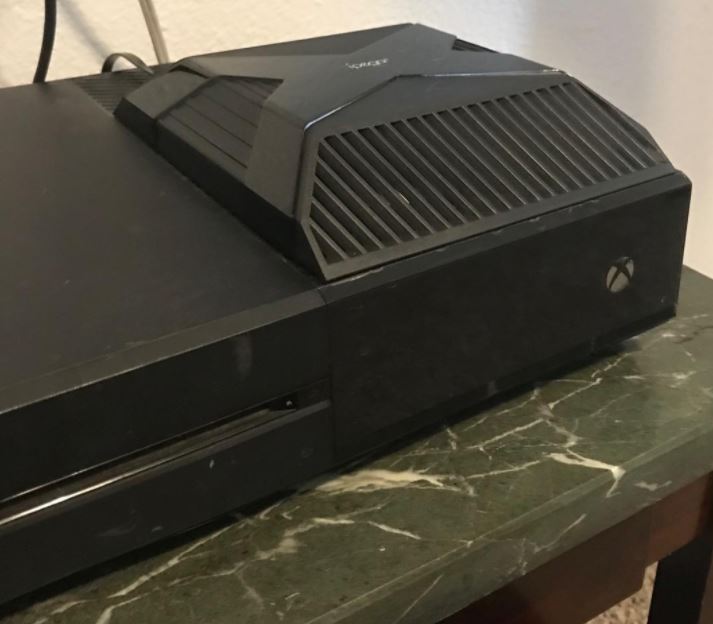 That said, Microsoft’s engineers can’t possibly take every conceivable situation into account. What if you live in Florida and your air conditioner is broken? Those kinds of conditions can take a toll on even a very well-designed game console. With an external cooling fan, you can help compensate for those kinds of extreme conditions. By moving more air through the system, you’ll be cooling it even more efficiently than the factory design.

Keep in mind, though, that the cooling efficiency is ultimately limited by the ambient air temperature. If it’s 90 degrees in your living room, your console will never get cooler than 90 degrees. But even the hottest indoor temperatures are safe for a game console. If the ambient air were warm enough to damage your processor, you wouldn’t care, because you’d already be dead. On the other hand, the hotter the air, the more air you need to move for efficient cooling.

On a similar note, even the most powerful fan won’t do much good if your console is filthy. If you’re concerned about cooling, make sure to keep your Xbox One’s vents clean. A can of air duster can be a huge help in this regard. You can also wipe your console down with a damp cloth. Whether or not you’re using an external cooling fan, make sure to clean your console regularly. Now, let’s talk about these fans! 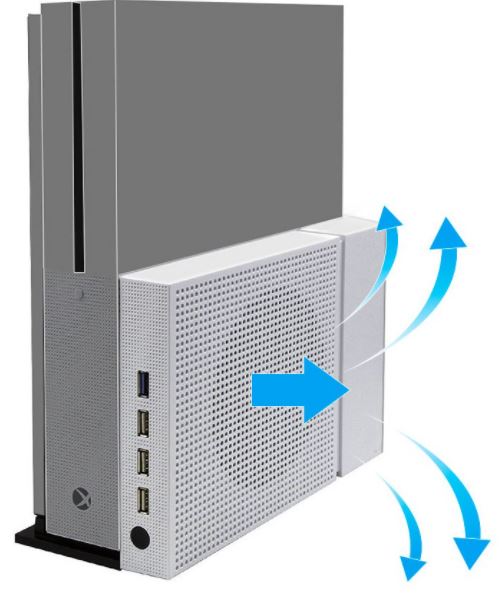 The Ideashop Xbox One S Vertical Stand Cooling Fan is a two-in-one fan and stand. It mounts over the main cooling vent, just over the power button. Because it makes the One S significantly wider, it makes it easier to stand up. To be fair, you can already position the Xbox One S in a vertical configuration. But it’s a bit thin, and the Ideashop stand makes it significantly more secure. It’s constructed from white ABS plastic, which is indistinguishable from the One S case. Once it’s been assembled, it looks like a natural extension of the console. 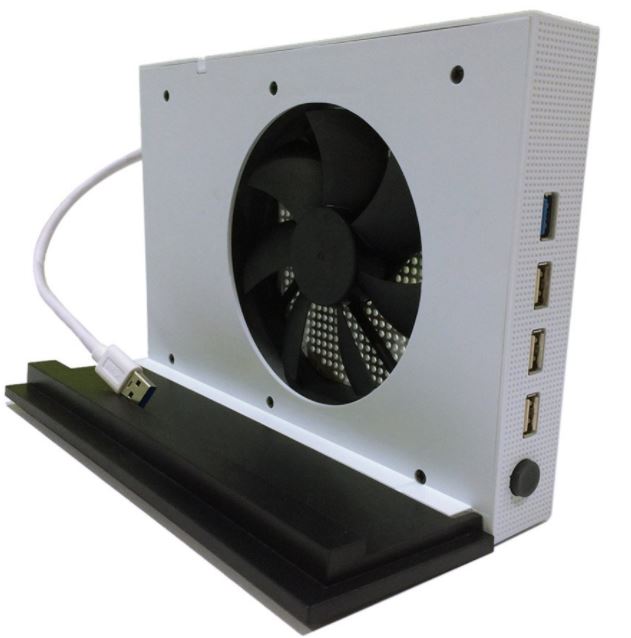 The bottom of the stand has a black base, which extends under your One S console. This keeps the console securely in place when the stand is in use. On the top, there’s a large circular vent with a fan for providing more air flow. On the front, there’s a row of four USB ports. This provides a significant additional benefit. Not only do you have a stand and a fan, you can also connect more peripherals. Charge your phone, plug in a USB headset, or connect a play-and-charge kit from the front of the console.

Keep in mind, though, that all of these ports are powered by a single USB connection to the console. In other words, you’re not going to get maximum power on all ports, especially with the fan running. There are a couple of ways around this. First, you could turn the fan off when it’s not needed. There’s a simple button for this on the front of the unit. In this mode, you’re basically using the stand as a USB hub.

Alternatively, you can simply use another power supply for charging your devices. There’s only so much juice you can get out of a single USB connection! 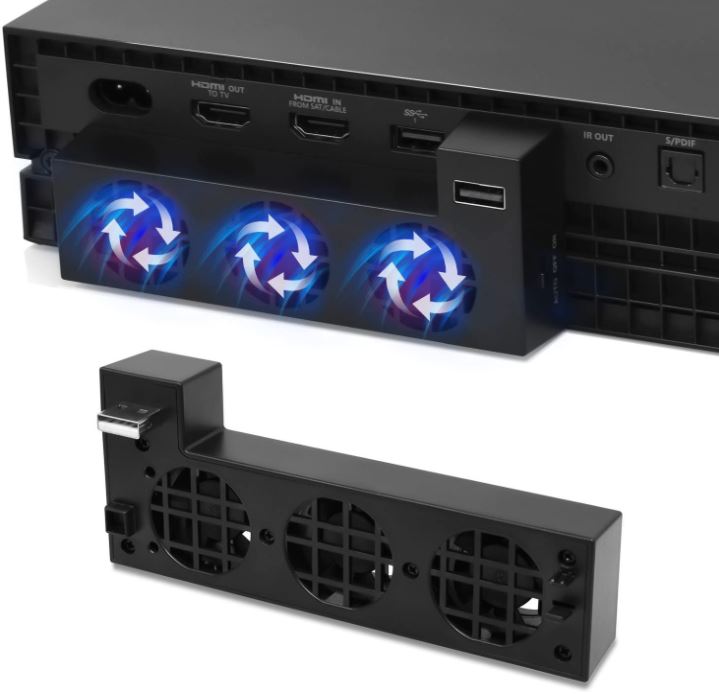 FYoung is an up-and-coming manufacturer that produces a wide variety of electronics. They’re particularly well known for their console accessories, like their Switch Lite charging dock. So, we were excited to see how the FYoung USB Cooling Fan for Xbox One X would perform. As with the last fan we looked at, the FYoung fan is designed specifically for one console variant. It’s made to clip into the back of the Xbox One X. It could technically plug into a regular Xbox One or an Xbox One S. However, the fans wouldn’t be lined up with your console’s fans. There just wouldn’t be any point. 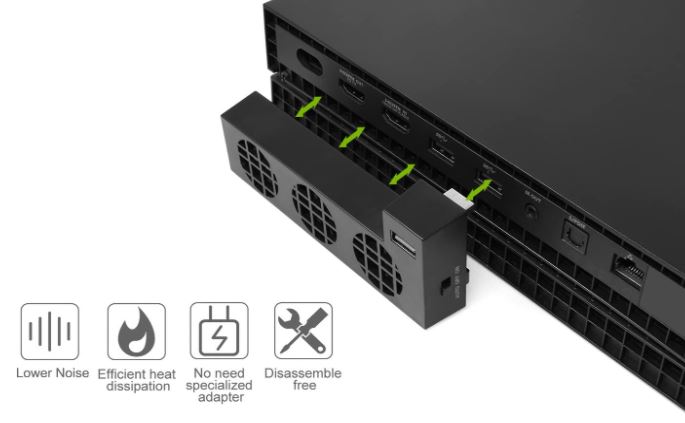 The FYoung fan is black in color, a perfect match for the Xbox One X’s housing. It’s rectangular, with three internal cooling fans that line up with the vents on the back of the One X. A small block on the top plugs directly into the left-hand USB port on the machine. There’s even a pass-through port on the back of the fan. This allows you to connect a controller, charge a phone, or use other USB accessories such as headsets. Not only that, but installation is as simple and straightforward as it gets. You just snap the fan onto the back of your console and start playing. 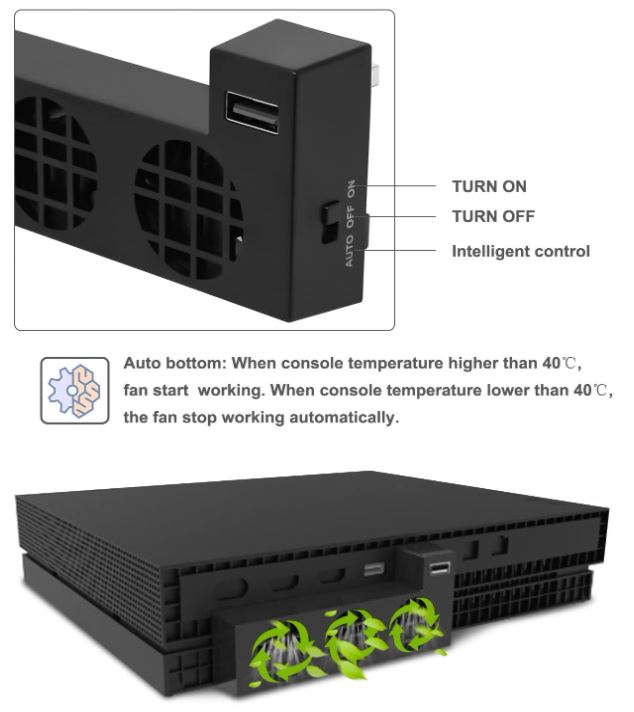 One neat feature of the FYoung fan is that it has three different modes. The first two are obvious: it can be turned on or off. Wow! That’s some advanced technology! But the third mode is more interesting. In auto mode, the FYoung fan will only spool up when it’s needed. It has a temperature sensor that monitors the current heat at the vent. As long as the temperature remains below 40 ℃, the fan will not operate. As soon as the temperature hits 40 ℃, the fan will start running. This can save power, since the fan won’t run when it’s not needed. It also eliminates unnecessary fan noise when the system is idling. 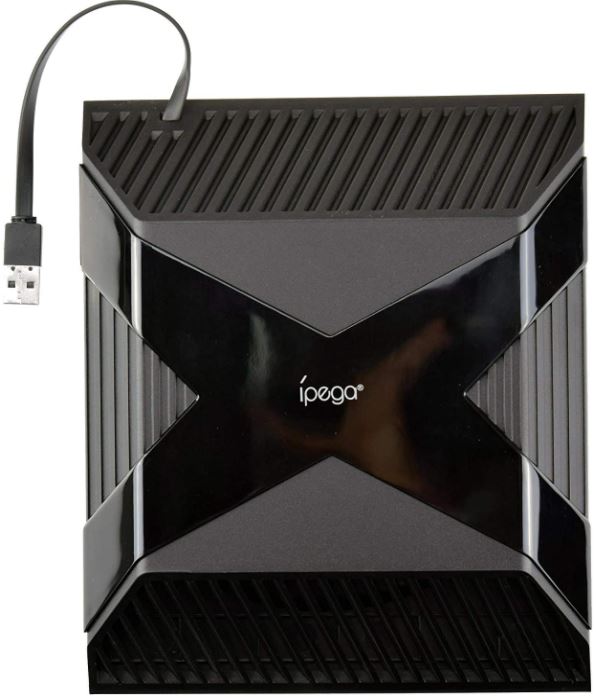 The Mutop External Cooling Fan for Xbox One is designed similarly to the Ideashop fan. It mounts directly on top of the Xbox One console, right over the console’s existing top vent. This means that setup takes just a few minutes. It plugs into the back of your Xbox One with a simple USB tether. The cord is a bit short, but that’s not an issue. After all, it only needs to run a few inches! The unit has a trapezoidal design, with air intakes on the front slope. 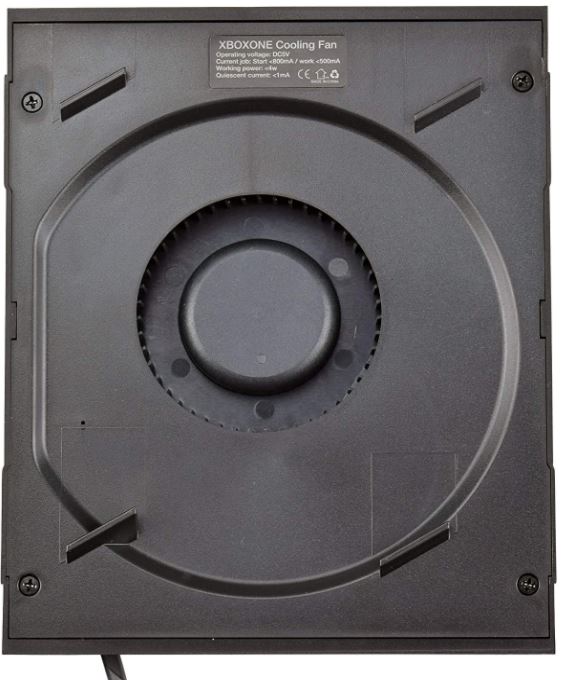 Like the Ideashop fan, the Mutop fan has a built-in temperature sensor. It’s set to 35 ℃, so it will kick in when the temperature gets too warm. Otherwise, it will remain off, so as not to produce too much noise. In addition to that, there’s also a manual on/off button. This allows you to control the fan more easily when you want to. On the cosmetic level, it has a glossy, rubbery-looking X over the top of the unit. This is purely for looks, but it does make the Mutop fan look pretty sharp! 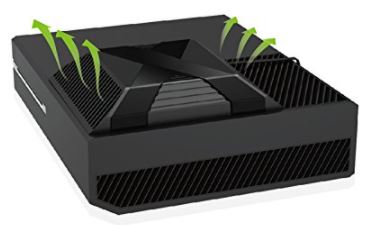 As you can see, no one of these fans is really the “best”. To be sure, they all offer their own benefits and drawbacks. But they’re also designed for different Xbox One variants. No matter how much you like the Ideashop stand, for instance, it will never work with an Xbox One X. That said, let’s sum up what we’ve learned.

We started by reviewing the Ideashop Xbox One S Vertical Stand Cooling Fan. This is a powerful cooling fan that also offers some extra features. For one thing, it works as a stand, so you can more easily mount your Xbox One S vertically. Not only that, but the front of the unit sports a set of four USB ports. So not only is it a stand and a fan, but it’s also a USB hub. Not a bad combination!

The FYoung USB Cooling fan for Xbox One X is a beautiful companion for the Xbox One X console. It mounts directly on the back, and seats neatly over your rear vents. There aren’t a ton of features to look at here, but the FYoung fan can operate in automatic mode. This will save you power and reduce noise when the fan isn’t needed.

The Mutop External Cooling Fan for Xbox One is a perfectly suitable fan for the original Xbox One. It has a smart, temperature-sensing mode just like the FYoung fan. It also mounts easily on your console, taking just seconds to set up. If you’re having trouble with your Xbox One overheating, you’re looking at a solid choice.