Whether it’s a cell phone or a CPAP machine, we all rely on electronics to one degree or another. When the power goes out, it’s important to have a reliable supply. And for some people, such as those who rely on medical equipment, it can be a matter of life and death. As a result, we have high standards for backup power equipment. A power station either works, or it’s not worth buying. One of the best-known brands is Bluetti, and we’ve reviewed a number of their products in the past. As a result, we’re always excited to see a new Bluetti offering.

On July 1st, 2020, Bluetti launched the AC200 on the crowdfunding platform Indiegogo. This was an innovative, modular power station, and the public response was powerful. The campaign earned Bluetti a total of over $6.7 million, and the AC200 has recently begun shipping. Thanks to the success of the campaign, the upgraded AC200 Max will now become a normal part of Bluetti’s lineup. Once shipments to early backers are complete, it will be available on Bluetti’s website. This is scheduled to happen in August, 2021.

The AC300 and the larger batteries will be available to the public in September. As a result, Bluetti is actually releasing four major products in a two month time period. Now, we’re going to take a look at both the AC200 Max and AC300. We’ll talk about their design, their battery capacity, and what you can plug into them. At that point, we’ll be able to render our verdict. Let’s get started! 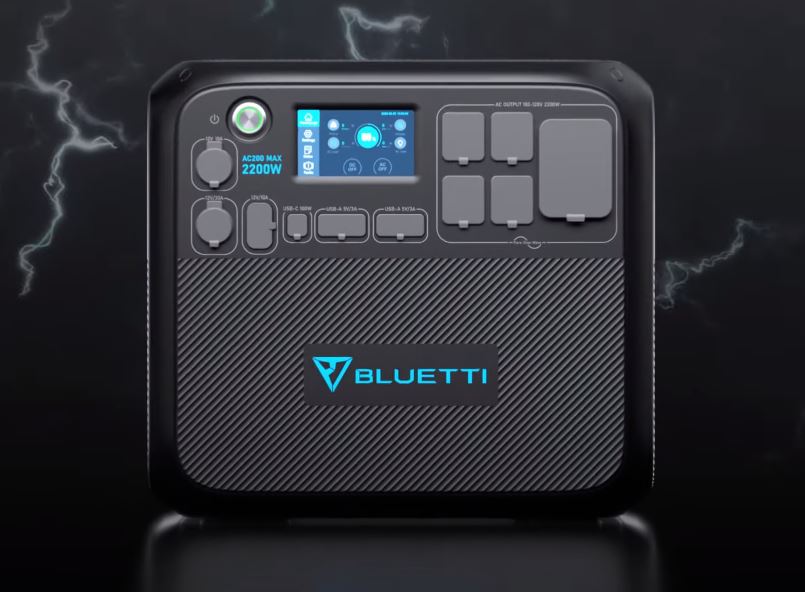 The Bluetti AC200 Max is a beefy, all-black power station with a molded polymer housing. It measures 16.5 inches wide, 11 inches deep, and 15.2 inches high, and is fairly hefty to lift. Thankfully, there’s a pair of ergonomic handles built into the housing, so it’s easy to grab onto.

The controls are all located on the front, with a power button and a blue LCD display. For most functions, you’ll need to connect with the app. The app is free, but it works via Bluetooth only. As a result, you can’t control the power station remotely. You have to physically be in the room, and within the roughly 30-foot range. On the other hand, you won’t need to rely on WiFi coverage. Within the app, you can view your current battery level, or see how much power your devices are drawing. You can also view historical usage data to track how your power is being consumed. 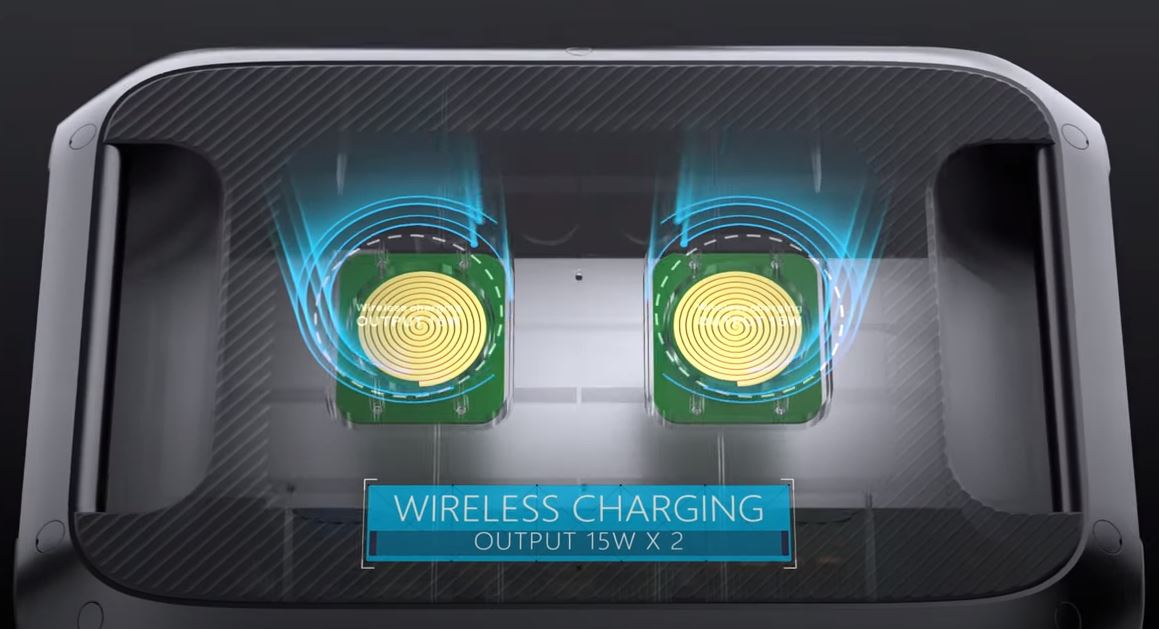 Along with the power bank itself, you get a trio of cables for keeping the battery charged. There’s an AC adapter, a 12-volt automotive adapter, and a solar charging cable. Whether you’re using the AC200 Max for home backup or for off-grid use, it will be easy to hook up.

The AC200 Max sports a Lithium-Iron Oxide (LiFePO4) battery, which is the latest in battery technology. This type of battery lasts longer than Lithium and Lithium-Ion, and is better for more charge cycles. It’s also far less likely to overheat than older types of batteries. As a matter of fact, this is far from the first time Bluetti has used a LiFePO4 battery. Not long ago, we reviewed the Bluetti EB70, a smaller, 716 Watt-hour (Wh) power station with LiFePO4 cells. 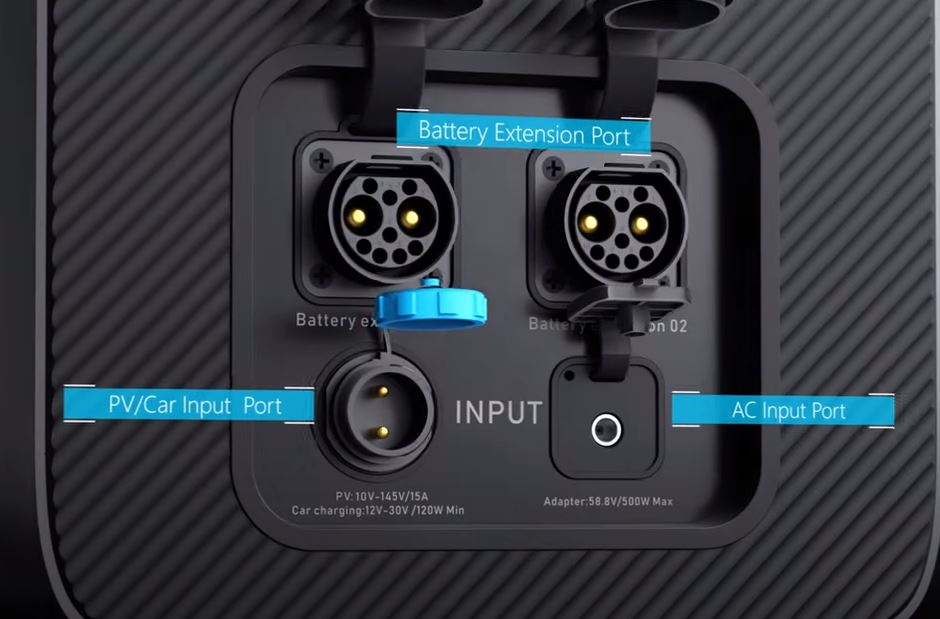 The AC200 Max is a bit beefier than that, with a built-in 2,048Wh battery. This is enough to power an average full-sized fridge for 20 hours, or a window A/C unit for two hours. Not only that, but the system is expandable. With a pair of B230 or B300 batteries, you can triple your capacity to 8,192Wh.

The maximum continuous power supply is 2,200W. That’s enough to run a space heater, and still charge your laptop and cell phone. Moreover, the battery is also capable of providing 4,800W of surge power. This is useful for refrigerators, and other devices that have a high starting power draw. Moreover, the power is pure sine wave, not modified sine wave. This means it’s safe for sensitive electronics. 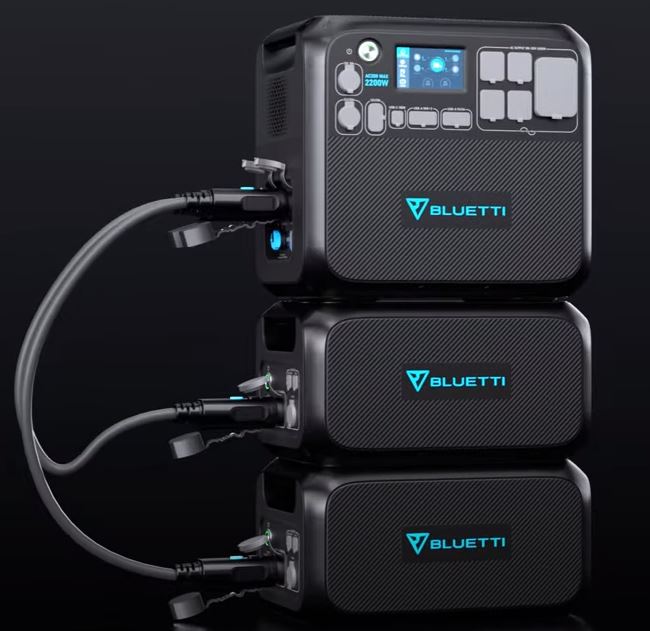 So, what can you actually power with the AC200 Max? To begin with, you get four three-prong AC outlets, with a maximum of 2,200 watts total. You’ll notice that’s the same as the maximum for the charger as a whole. As a result, you’ll get less wattage on the AC outlets when you start plugging in other devices. Still, it’s nice to have the flexibility to use your power as you see fit. In addition to the standard AC outlets, there’s a TT-30 three-prong outlet. This is an unusual outlet, but you’ll know it if you need it. For ordinary DC power, you get 12- and 24-volt cigarette lighter outlets. 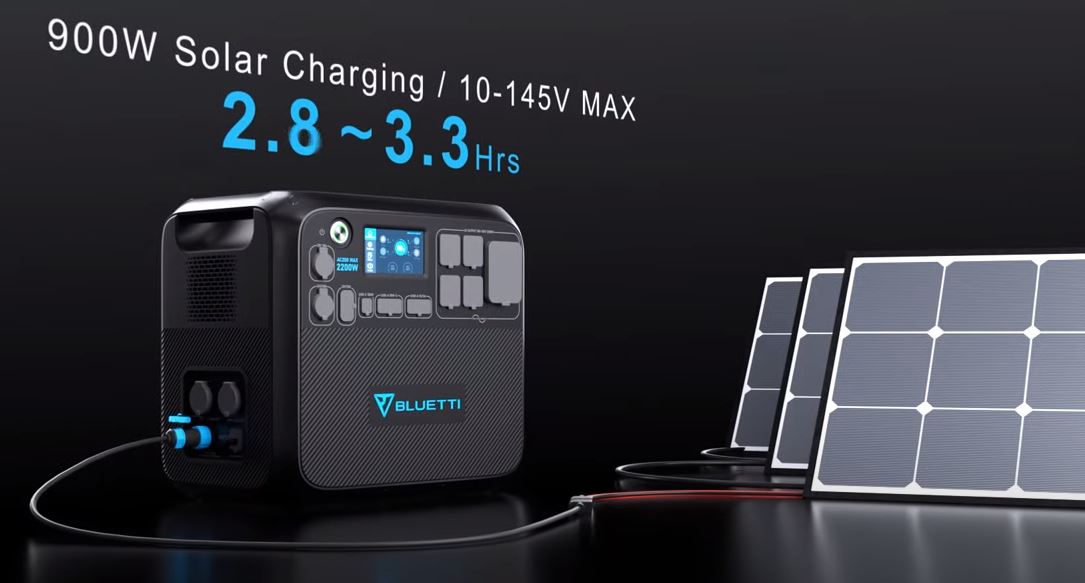 For charging USB devices, you get a pair of standard, 15-watt USB Type-A ports. These don’t provide any boosted performance, but they work well for most devices. The other two USB Type-A ports provide 18 watts of power. These are useful for iPhones, since you’ll be able to maximize your charging speed.

Finally, there’s a 100-watt USB Type-C PD 3.0 port. This can be used for many Android phones to get even better speeds than an iPhone. It’s also essential for any USB-powered laptops, since you can use your laptop while it’s charging. In addition to all that, there’s a pair of wireless charging pads on top. These are great not just for smartphones, but also for low-wattage devices like wireless earbuds. 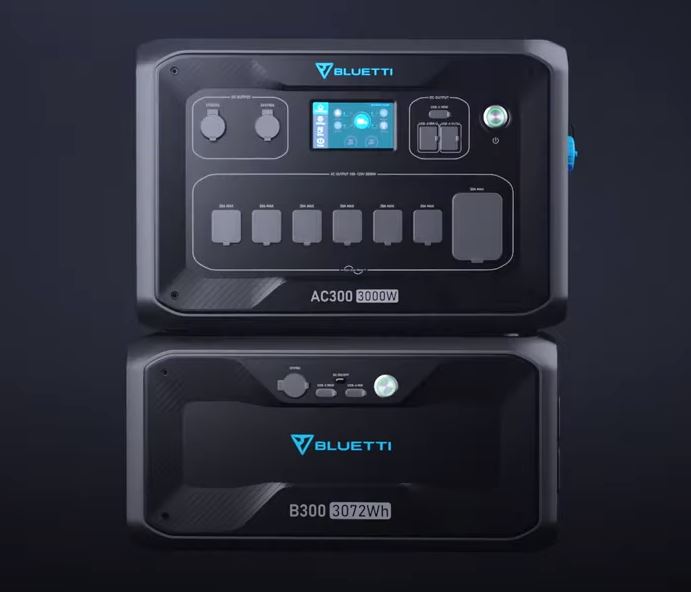 The Bluetti AC300 is similar in many respects to the AC200 Max. The first thing you’ll notice is that it’s a bit larger. At 20.5 inches wide, 13.9 inches high, and 11.8 inches deep, it’s certainly beefy. And just like the AC200 Max, it’s heavy for the size, which is mitigated by a pair of molded handles. The controls are also similar, with basic functions on the machine itself and more advanced options in the app. That said, the AC300 supports both Bluetooth and WiFi connections. With WiFi, you can check your battery status from anywhere in the world. That said, WiFi would require a working power grid. In the absence of that, Bluetooth will still work fine. 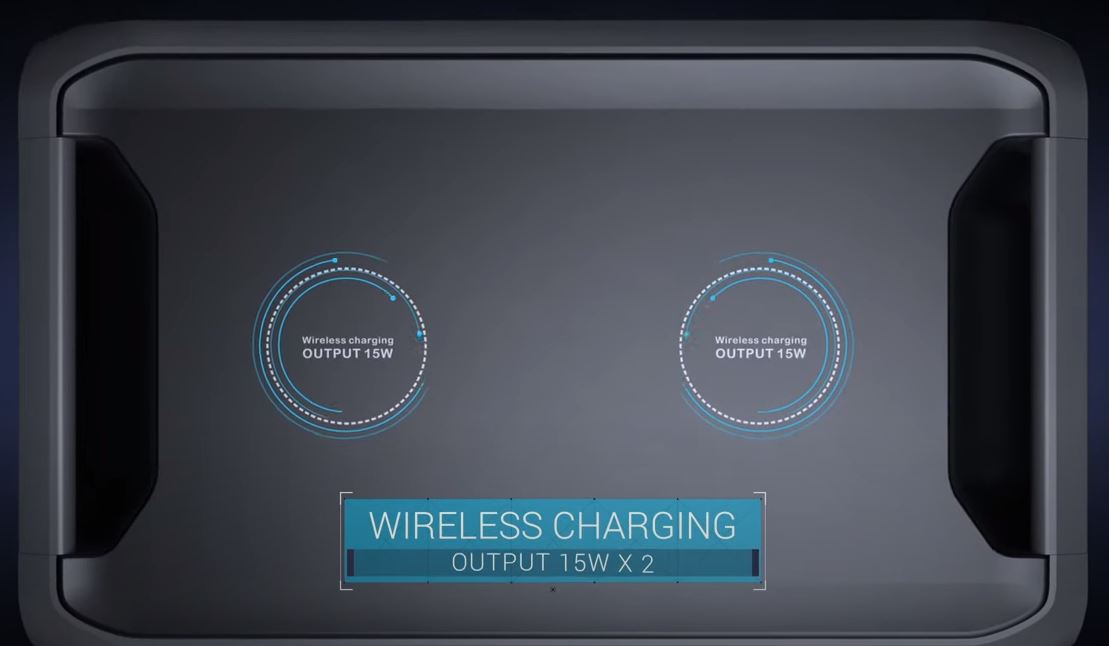 The AC300 ships with the same three chargers as its little brother. These include the AC, automotive, and solar cables. It does an admirable job of charging from all three sources. That said, if you’re looking primarily for an off-grid power station, you might something a bit different. For example, consider the original Bluetti AC200. It’s actually optimized for solar, which makes it perfect for RVing or off-grid use. On the downside, it has significantly less capacity than the AC300. 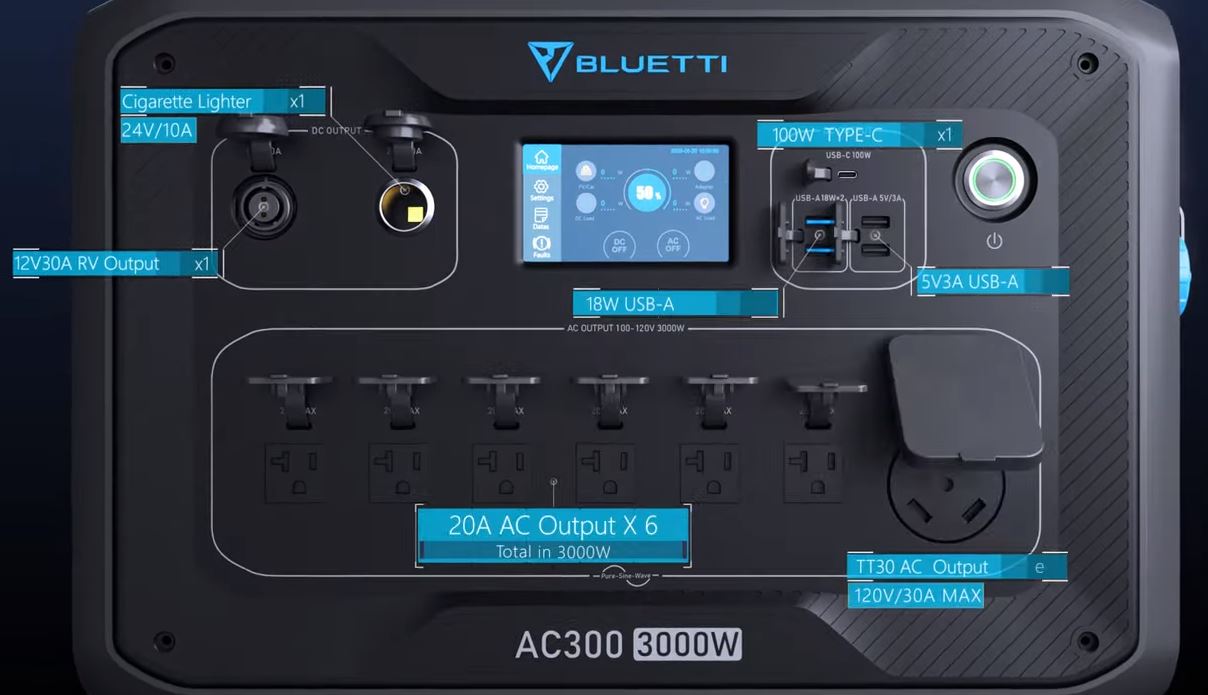 Where the AC300 differs most from the AC200 Max is in the battery design. In point of fact, the AC300 actually doesn’t have any internal battery. As such, it’s not so much an all-in-one power bank as a control station. To actually make it work, you need a bare minimum of one B300 battery pack. This will provide you with 3,072Wh of power, enough for about three hours of A/C operation. In total, you can connect up to four battery packs, for up to 12,300Wh of power. If you’re running a fridge, you can keep your food cold for five days straight on that much energy.

If you want a lot of capacity in a smaller package, you won’t find it. That said, there are some all-in-one power stations that come close. The Bluetti EP500 is a good example. This large power station has wheels for added mobility, and a capacity of 5,100Wh. On the downside, it’s not modular, so there’s no way to expand it.

Like the AC200 Max, the AC300 has a LiFePO4 battery that provides pure sine wave power. This makes it one of the safer power stations on today’s market. It can provide up to 3,000 watts of continuous power, so you can run larger devices with ease. And with 6,000 watts of surge power, high startup draw is not a concern. 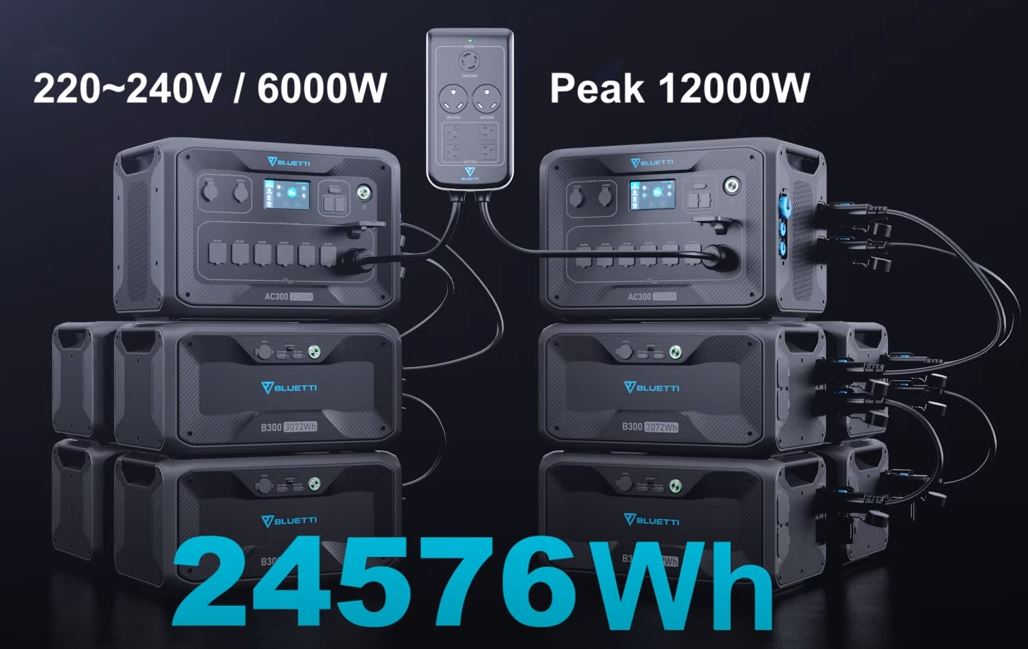 The AC300 provides a full array of power ports, beginning with six three-prong AC outlets. These provide up to 3,000 watts total, the same as the maximum for the device. There’s also a TT-30 plug for those who need one. For DC power, you get four outlets instead of two. Two of these are standard 12-volt cigarette lighter outlets, and the other two are barrel-style. There’s no 24-volt DC supply.

For USB power, you get the same exact options as the AC200 Max. To repeat, these include four USB Type-A ports, two each with 15 and 18 watts. There’s also a 100-watt USB Type-C PD port, and a pair of Qi wireless charging pads. That’s pretty comprehensive, regardless of what type of device you’re trying to power.

So, which one of these power supplies is the best for your needs? We started out by reviewing the Bluetti AC200 Max. This upgraded version of the AC200 offers impressive power, with up to 2,200 continuous watts. If you want to maximize portability, you just carry around the base unit. It can also be upgraded with additional battery packs to triple its capacity. All in all, we were pleased with the performance, and with the array of devices it supports.

The Bluetti AC300 is similar at first glance, but it’s a different animal altogether. The main difference is that there’s not actually any on-board power. You need to buy battery packs just to make it work. However, the AC300 is entirely modular. This makes it a good choice if you only want to take along the power you need. It’s also undeniably powerful. With a maximum capacity of over 12,000Wh, it’s potentially the most powerful power station we’ve ever seen. If you need a ton of power in a modular package, the AC300 is a solid choice.