Most keyboards aren’t any good. And many people have had the misfortune of spending their entire lives working on terrible boards, never knowing the difference. It’s like spending your life watching 480p television. Someone who’s only seek 480p doesn’t feel tormented by the low quality of the resolution, but once you’re used to seeing 1080p, it’s tough to change back.

The same is true of keyboards. Most people have spent their lives using cheap membrane keyboards. By contrast, mechanical boards use somewhat sophisticated spring switches to reduce or increase the actuation force required for a keystroke, and give tactile or auditory feedback precisely when the stroke is registered. The result is a board that can be used with less physical force, which feels more comfortable as you press each key. You also end up with a higher degree of performance, especially when it comes to lengthy typing sessions or gaming.

Sadly, picking a mechanical keyboard can be a miserable experience. You may find what seems to be the perfect board, only to notice its keycaps use some kind of gaudy font. For a time, it seemed that every manufacturer in the industry was trying to construct their own unique keyboard aesthetic. Logitech keyboards aesthetically screamed they were from the Logitech brand. Razer boards can still be spotted from across the room. But where does that leave people who want something that looks like a regular keyboard?

If you find a keyboard with a unique aesthetic that you can fall in love with, that’s great. Some people place bright gold chrome keycaps on their keyboard, and they absolutely love them. But for a straightforward, adult-looking keyboard, it’s been getting tougher and tougher to find keyboards. That’s especially true if you want to avoid generic brands, or buy boards that cost more than a few dollars. 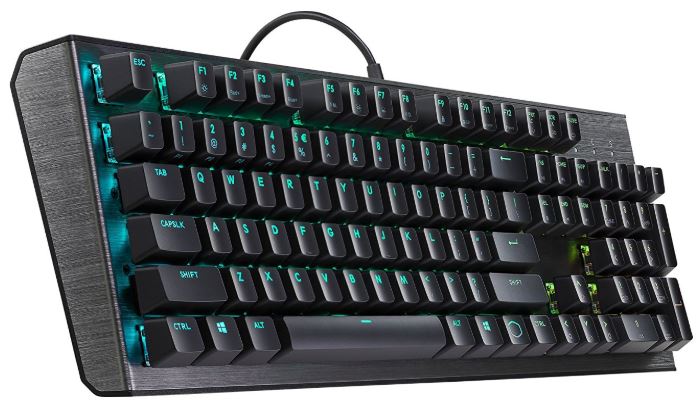 Fortunately, the Cooler Master CK550 is here to help fill the gap. It would be great if every major brand had their own ordinary-looking keyboard, but as it stands normal boards have become abnormal. If you’re someone looking for a properly constructed, well built, adult-looking keyboard, the CK550 will be a breath of fresh air.

The greatest weakness of mid-ranged mechanical keyboards is they tend to have mediocre craftsmanship. They might use hard-plastic builds, which still easily flex and bend within your hands. They use cheap keycaps which fade and wear overnight. And they come loaded with certain types of features that may or may not be totally worthless to you, but you’re nevertheless paying for them.

The CK550 is essentially the antithesis of all the problems which are typical of boards within this price range. Most notably perhaps through its use of a brushed aluminum base, which is usually reserved for boards costing well over $100. 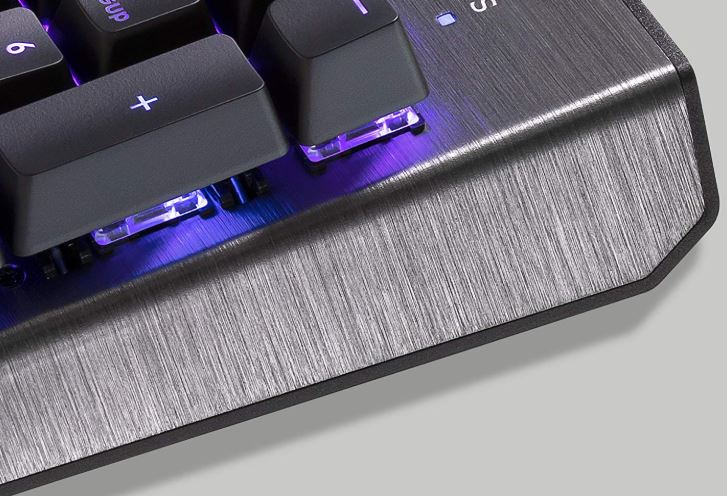 The CK550 is a full-sized mechanical keyboard intended to go head-to-head with any other professional grade gaming keyboard. It sits at 1.6 x 5.3 x 18.1-inches, with a somewhat minimalistic and unassuming outward appearance which would be welcome in front of virtually any PC. The CK550 is finished with a gunmetal black exterior, while the brushed aluminum build keeps the board sturdy enough to ensure the board feels steady as you pound away on the keys.

Along the top of the CK550, you’ll notice the top plate has been subtly curved for optimal comfort, and it’s hard to miss the floating keycaps. Apart from contributing to the minimalistic appearance of the board, using a floating keycap design makes it drastically easier to keep your mechanical keyboard clean. Unlike keyboards built around a tall bezel, where you often are forced to evacuate every single key on the board to clean it, the CK550 allows you to evacuate debris from the board with gentle tapping and light blowing. 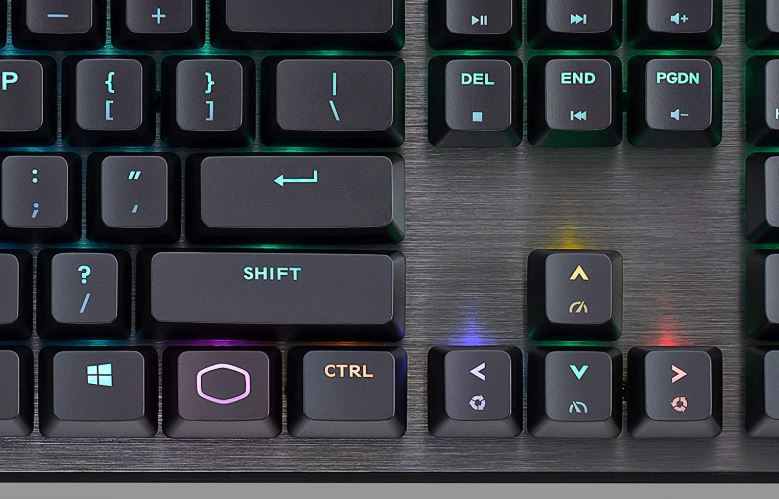 Backlit keys with full RGB lighting has become somewhat standard in recent years, and the CK550 isn’t any different. Aesthetically, the CK550 uses RGB backlighting that’s been built on a per-key basis. That means instead of flooding the entire board with LEDs, each individual key has been assigned one. Many cheaper RGB keyboards, especially keyboards within this price range, tend to plant the LEDs wantonly around the board, which leads to a great deal of LED bleeding from the base of each key. That’s a kind of detail that’s tough to advertise because it’s tough to explain, but it’s those details in the craft which make the CK550 such a consistent keyboard.

In spite of having floating keycaps, the CK550 has essentially zero LED bleeding from each key. And that’s actually critical to its presentation, given the highly programmable nature of each LED. Among its programmable LED options, you’ll notice Cooler Master also provides a variety of lighting modes and effects. None of these effects are anything particularly unheard of, and they’re mostly composed of the usual suspects like a breathing mode and a wave mode. But those presentations can be customized to a greater extent, as we’ll see later on. 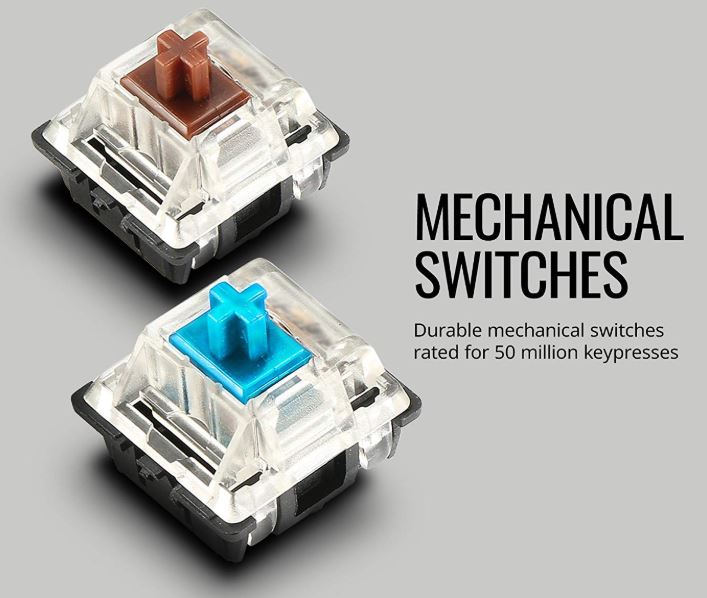 Internally, the CK550 uses Gateron switches which use a design that’s quite similar to that of standard Cherry MX switches. Gateron switches are also a rather common alternative to Cherry MX, so if you ever find yourself looking for replacement keycaps or something similar, you won’t end up with an added layer of difficulty by having to search for obscure parts.

The CK550 is available with brown, red, and blue switches. Each switch correlates to the same color for Cherry switches. So blue switches are extra loud for auditory feedback during key actuation, browns provide a quiet tactile feedback and reds are somewhere between brown and blue. Similar to Cherry switches, each switch is rated for more than 50-million keystrokes, which translates to decades of heavy typing. Mechanical keyboards finally die when you spill ice-cream on them, people rarely actually wear down the switches to the point of failure.

On a standard keyboard, the keys to the immediate right of the spacebar include an alt button, a function key, a menu key, and a control key. The CK550 has replaced the menu key and function key with a one key, labeled with a large circular symbol. It’s a sort of command-key that can be used in conjunction with the other keys to do on-board customization of the CK550 without having to deal with software. You can also use that key in conjunction with the home, end, page up, page down keys for media control.

Full sized keyboards are fairly large, but bigger boards exist. When you start adding on programmable macro buttons and media keys, big keyboards get bigger. If you’re a gamer who’s invested in MMORPGs and you need to memorize nearly 100 hotkeys, then those kind of added macro buttons can be great. But they do drastically increase the price of a board, and they expand the size boards which were large to begin with. You really only want those features if you actually need them.

The CK550 doesn’t have any dedicated macro keys or gaming keys. If you’re someone who plays lots of MMORPGs, that might be an issue for you. And if you prefer to do your media controls through your keyboard, you’ll find the CK550 doesn’t have any dedicated media buttons. But you can still access basic media control commands with the Cooler Master “function key”, and those shortcuts have been built so that even people with smaller hands can generally reach them comfortably with one hand.

If features like dedicated media buttons and LCD displays matter to you, then you can get them by adding about $50 to your budget. But you’ll almost certainly end up with a less sturdy board than the CK550, even if some of the details of the construction aren’t immediately apparent to you. If you don’t actually need or want features like those, then they’re a type of fat that can be cut off the keyboard to make a more minimalistic design. You save money and get a better keyboard at the same time.

For anyone who spends much of their day behind a keyboard, these seemingly minor differences can make a world of difference. Like with 480p vs 1080p, once you’ve switched from a membrane keyboard to a mechanical keyboard, it can be hard to switch back. Typists, programmers, and gamers are some of the biggest demographics for mechanical keyboards.

Gamers in particular tend to go for mechanical boards because split-second actuation can be a huge competitive advantage. Knowing whether or not a keystroke has registered by sound or feel is a great assurance and it takes almost no time to get used to.

Who Should Choose the Cooler Master CK550?

The Cooler Master CK550 has no added frills. You won’t find it loaded with USB slots, 3.5mm aux pass-through ports, or any extra macro buttons. If you’re someone who doesn’t care about having those things, then the CK550 is an excellent choice. Not simply because those features are missing, but because in their absence Cooler Master has focused on constructing every existing feature to a higher level of quality.

The CK550 offers a sturdy construction typically seen on boards twice this price. You’re getting switches which compare favorably to standard Cherry MX switches. You’re getting a minimalistic aesthetic that’s still highly customizable, with per-key LEDs which are individually programmable. Everything you get is done well, and everything you don’t get is the reason why this keyboard doesn’t cost $150.

If you’ve never used a mechanical keyboard before, the CK550 is an excellent place to get started. If you’ve used mechanical boards before and you’re looking for an upgrade, the CK550 is also a great choice. It’s got an incredibly sturdy build, a highly customizable aesthetic, and it’s made from a big brand that isn’t going to pull software support and vanish overnight. Anyone who spends more than a few hours in front of the keyboard should check it out.