What makes one keyboard different from another? There are about a dozen different things. And those factors make up the divide between gaming keyboards, and ordinary keyboards. They make up the difference between entry-level, and mid-shelf. Depending on what you’re looking for, and how much you’re willing to spend, different boards will be better for different people.

The improvement between keyboards isn’t linear. For instance, if you’re someone who does a lot of typing in addition to playing games, that will affect the kind of switches you’ll want to use. By contrast, someone who’s only using their PC for playing games and browsing Netflix will prefer a totally different keyboard. Even preferences for media controls come into play.

Where does that land the Corsair K57? Well, it should be clear that this keyboard is positioning itself more towards the entry-level. At least, compared to other gaming keyboards. It used to be that a decent gaming keyboard would almost necessarily cost around $75. But as competition has ramped up over the past decade, it’s been possible to find better and better boards at the entry-level. 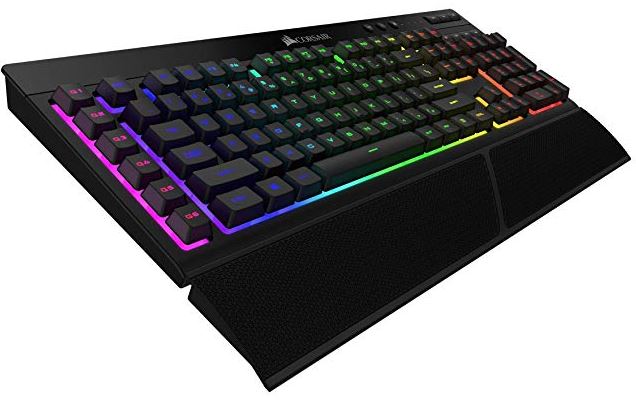 Because this is pretty close to being an entry-level gaming keyboard, out of the gate, there are several features you know aren’t going to be onboard. That includes things like an LED or OLED display. But that doesn’t mean this board is barebones, or without its own added benefits. In fact, the extra macro switches help make the K57 resemble a lot of fancy gaming keyboards from generations past.

But anytime you’re looking at a non-mechanical gaming board, you can save a bundle of money on switches. And that allows you to focus on other kinds of features – the sort which you normally wouldn’t get able to get at a lower price point because the price of mechanical switches is steep. Still, the general quality of the board remains a strong factor for anyone’s selection.

One thing that’s a little surprising is that the K57 is a full sized board. That includes a num-pad, a full set of media controls, and even an extra row of macro keys. That’s a tad surprising just because of the relatively modest price of the board. But as such, this keyboard costumes a fair amount of desk space. It measures 12.1 x 9.4 x 8.8 inches. 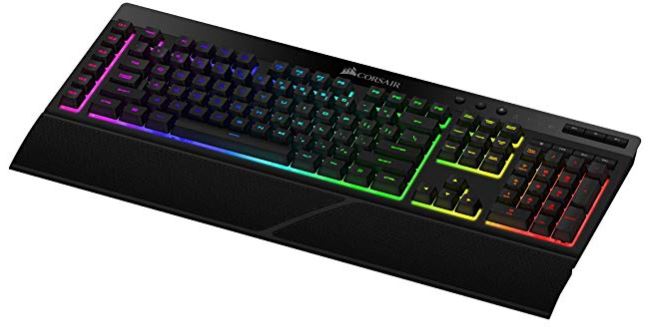 It’s not that much larger than a regular full sized board, so you’re not going to encounter trouble shoving it inside keyboard trays. And it’s not going to make you pick up a new keyboard wrist rest, if you’ve got one of those you’d like to keep using. But the extra bulk is something you can easily see. It feels distinctly bigger.

Quality of construction is something which that can’t be totally shored-up without entering into mid-ranged pricing. In the case of the K57, that would mean basically mean doubling your budget. Here you’ll find the construction is almost entirely ABS. So it has a little bit of flex in your hands. Though that’s partially because of the extra length of the board. It still feels generally sturdy and strong.

Since it’s an extra-big board, it’s also a bit extra-heavy. In fact, it’s pretty close to five pounds. Though that’s not great for portability, it only adds to the stability of the keyboard once you’ve placed it on a desk. The rubberized feet on the bottom of the board have no trouble sticking in place, even if you’re using a glass surface.

In addition to being a full sized keyboard, you probably noticed the six macro keys on the far left hand side of the board. Those macro keys are fully programmable, allowing you to do almost anything with by taking advantage of key remapping features you can dig up in Corsair’s software suite.

The multimedia controls are also hard to overlook. Those allow you to take direct control over your audio without relying on keyboard shortcuts to get it done. The slight complexity of basic keyboard shortcuts causes a lot of people to overlook them. Especially when those shortcuts may interfere with shortcuts you’ve established in a game you’re playing. So throwing on some media controls is pretty welcome, and these ones do manage to make good use of the size of the board.

Notably, there are two separate volume keys, which allows you to more easily distinguish between raising and lowering the volume. There’s also a mute button, which is nice. Some keyboards decide to use a sound-wheel instead of a button layout like this one. But the wheel design does end up adding to the cost of the board, so this design decision is substance over style.
One more thing to quickly point are the LEDs. Separating the Bluetooth button and volume buttons are a couple small indicator LEDs. They’re present to let you know about the status of your wireless connection, as well as the status of the battery. And since they’re small lights, they’re not particularly distracting.

When you’re getting an entry-level gaming keyboard, one of the first sacrifices you make are USB port connections. Because adding them to a keyboard raises the production cost, especially if you’re going to be using a faster USB connection. The K57 dispenses with USB ports entirely, which is something that may or may not affect you. It can be nice to connect your mouse straight to the keyboard. 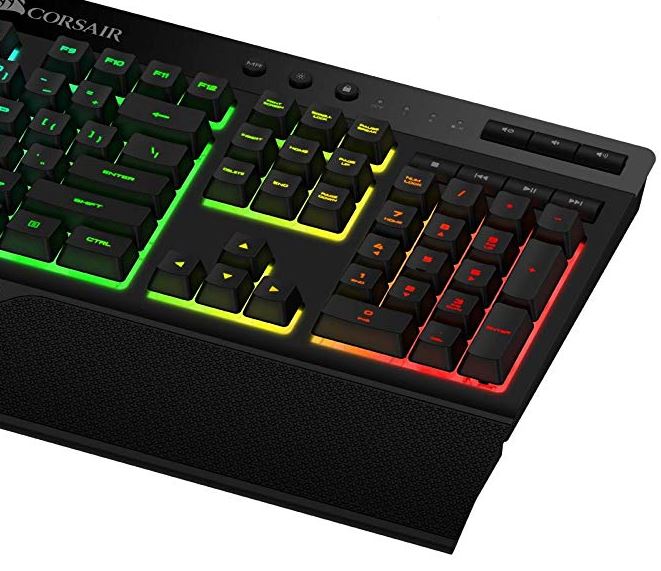 You may have noticed that the K57 is an RGB LED keyboard. They’ve used Capellix LEDs for brighter lights while also saving power in the process. And even though this is an entry-level board, it uses the same lighting customization software you’d use alongside one of Corsair’s top boards. Which means you have a basically bottomless array of customization options. That includes the ability to use wave, ripple, or raindrop effects. You can program the lighting behind each key individually, or otherwise create interactive customizable behaviors.

Corsair is using slipstream wireless connections to achieve a low-latency Bluetooth signal. But the best part about this keyboard is probably that you’re not restricted to running wireless — you can add a USB cable for a wired connection. Plus, that cable is removable do keep the wireless nature of the board in-tact. This hybrid wired/wireless design is what makes the K57 fully adaptable to enter a variety of different circumstances. It’s also what makes the board so easy to appreciate for a wide number of gamers.

The keycaps are at a middle-point between excellence and mediocrity. There is not much special about them, they’re basic ABS keycaps. Which means that over time, as you put in hundreds of hours behind your keyboard, these keycaps will begin to polish. That polished effect will give each keycaps a smooth, slick, oily feel. They’ll also appear to be shinier in direct light.

But Corsair did a good job of making the lettering. As such, it shouldn’t be quick to wear down or fade away with persistent use. So these keycaps are a bit of a mixed bag. One tiebreaker to help decide their fate is style. And in terms of their style, these keycaps are pretty cool. You may or may not like the lettering Corsair uses, but it does a great job of letting through lots of light from the LEDs. 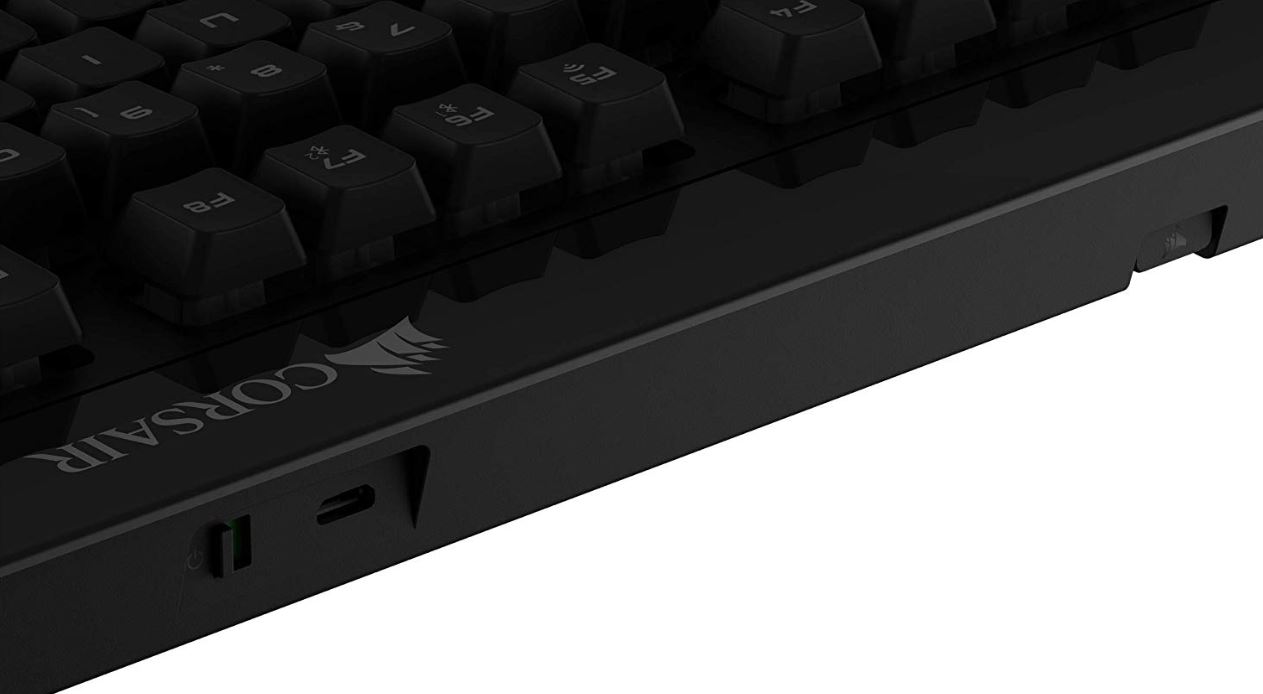 How did they manage to get all of these extra features into the board for this price? The trick is they’ve gone with a membrane keyboard instead of mechanical switches. That’s not necessarily a bad thing. Because some people prefer the tactile feel of a membrane keyboard. If that describes you, then great. Others prefer the feel of mechanical switches, which tend to be pretty expensive. If that describes you, then you might want to consider another keyboard we reviewed, the Gamdias Hermes M3.

Another thing that’s probably worth mentioning is the wrist rest. This is easily overlooked by a lot of people, but you don’t need wrist pain in order to get use from wrist rests. Depending on the posture of your wrists, basically anyone can get some good use from a wrist rest.

In this instance, the included wrist rest is pretty low-profile, so it’s not going to be ideal for everyone. It will depend on the positioning and posture of your wrists while interacting with a keyboard, and so will depend on the height of your chair and desk. If your keyboard is far below your wrists, then this wrist rest won’t do much to help you out.

In that case, it doesn’t hurt that it can be removed as needed. But otherwise, the wrist rest is coasted in soft rubber, and it feels nice against skin. Unfortunately, it also considerably adds to the dimensions of the board. But again, it can be removed as needed. And removing it doesn’t involve clipping it into place or out of place, it’s not permanently attached to the board at all.

Who Should Choose the CORSAIR K57 RGB Wireless Gaming Keyboard?

Corsair tends to make pretty good stuff. They’ve built a respectable brand by creating decent peripherals like the CORSAIR K57. But it’s important to know what you’re getting into. Certainly, this keyboard has several really admirable features. Its RBG lighting is every bit as advanced as keyboards that cost two or three times as much.

But it’s really the media controls and extra macro keys that distinguish this from other keyboards. Depending on the kind of games that you’re playing, the macro keys give you some pretty distinct advantages. Even outside of games, it’s nice to be able to assign those keys to less commonly used symbols that don’t appear on the keyboard. For example, the copyright or trademark symbols.

And admittedly, the wired/wireless design is pretty indispensable. For people who might want to be wired most of the time, but have the freedom to go wired as needed, this board should prove a good selection. It’s only when you want mechanical switches that this keyboard starts to look a little lackluster. But some people are perfectly happy with a membrane keyboard.