It’s usually inelegant to run lengthy HDMI cables. At least, unless you’re able to run them inside of a wall. In most circumstances, going wireless is the best option for getting around those kind of issues. Though you’re not going to find great wireless support for UHD content, there are plenty of HDMI sender/receiver kits capable of carrying crystal clear HD signals.

Wireless HDMI signals aren’t the right solution for every circumstance. When you’re trying to move your signal through a series of dense walls, there’s really no substitute for cables. But by putting some thought into the setup and execution of your wireless signal, you can typically overcome the handful of difficulties associated with going wireless with HDMI.

The Diamond VS100 is billed as a powerful, all-in-one style sender/receiver kit. Of course, power is relative. This kit allows you to wirelessly stream 1080p content from as far away as 150ft. Though to achieve that range, you need to maintain line of sight between the sender and receiver. The more obstacles you place between them, the shorter that distance will ultimately become. 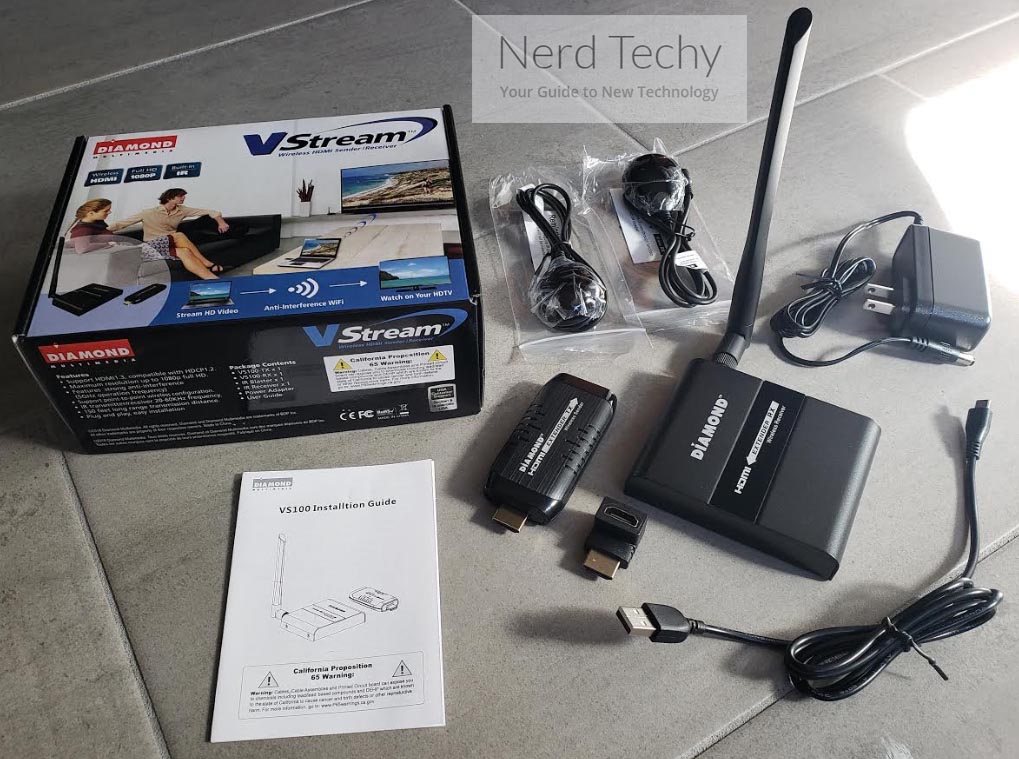 In spite of initial appearances, the Diamond Wireless HDMI Extender Kit is really tremendously adaptable. Kits like this often cap out around 30-feet of connectivity. That’s not terrible, but when you’re trying to broadcast greater distances, it’s just not enough. When you’re trying to pass a signal through solid walls and small obstacles, you need a more powerful signal.

Which is part of the reason why the VS100 is great for home entertainment setups and conference rooms. It has some pretty clear applications in educational circumstances as well, which is why it’s become a favorite for teachers. With a little configuration, this kit can connect with a satellite box, PC, gaming console, or basically anything else with an HDMI port.

The VS100 HDMI kit revolves around two primary components, the sender and receiver. The sender’s chassis measures roughly 3 x 3 x 0.3 inches, though its dimensions are extended considerably by the antenna. The antenna runs nearly six inches in length, which means the length and height of the VS100 may be affected depending on its positioning. 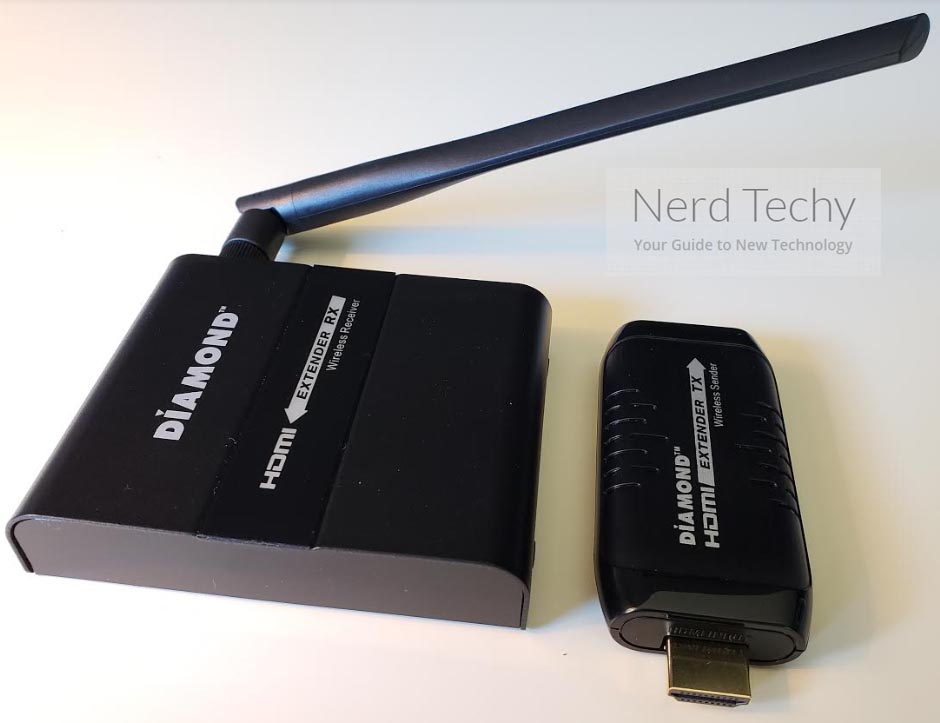 By contrast, the receiver has the proportions of a USB thumb drive, roughly 2.2 x 0.8 x 0.4-inches. Similar to the VS100 Sender unit, the receiver uses a simple black chassis. Though here it’s worth paying attention to some smart venting holes which run along the edges of the sender, helping provide better airflow.

It’s actually nice that Diamond decided to make their receiver and transmitter physically distinct. More often than not, both units end up looking almost identical, which can make them impossible to tell apart at a glance. These kind of small details can add up.

In the interests of keeping down heat, the internal body of this kit revolves around an aluminum frame layered with ABS plastic. It’s responsible for the slightly weighty feel of the receiver, but the extra weight is definitely worth the positive differences in thermal management.

It’s only heat and environmental conditions that truly threaten equipment like the VS100. Both the sender and receiver are made to be effective at dealing with heat, so this is unlikely to become an issue unless this kit is used in an exceptionally warm environment. But that’s a criticism you can levy against almost any piece of similar electronic equipment. 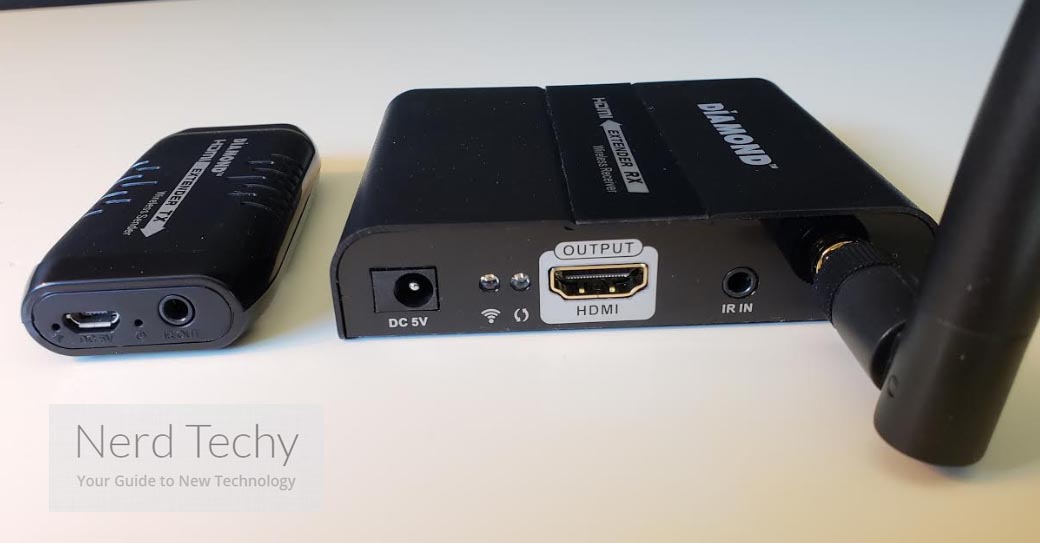 Sadly, running a wireless kit can be almost as complicated as running wires. Sometimes it can be more complicated than a wired setup because there can be more moving parts involved. Having to keep the transmitter and receiver in line-of-sight can be challenging on its own. Luckily, the VS100 keeps things as simple as it can.

The VS100 basically provides a plug and play setup, so you don’t have to get involved with complex wiring configurations. That also means no software installation and no time spent goofing around in Wi-Fi connection terminals. When you’re moving from one location to another, like between conference rooms or business meetings, plug-and-play installation is precisely what you want.

But it’s important to emphasize that this IR signal is basically an advanced version of the kind of technology that powers a television remote. When you break line of sight between the sender and receiver in any significant way, you’ll find the wireless capabilities of this unit immediately vanish.

Because IR technology is not the same as using Wi-Fi on the 2.4GHz band. Many people are used to the convenience of a Wi-Fi signal bouncing around various rooms with ease. It can be jarring to use wireless devices that don’t have that kind of stretching capacity. The VS100 is basically like running an invisible wire between the sender and receiver. 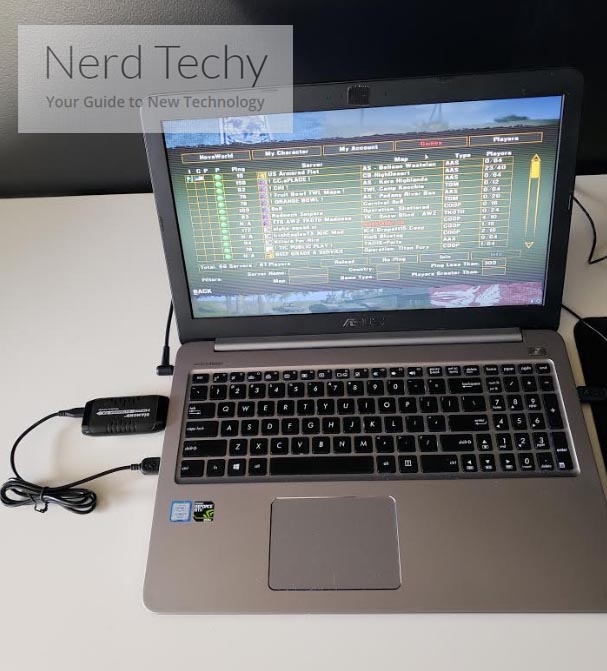 The IR transmitter and receiver operate on the 20-60KHz frequency, which means they’ll work even in areas where there’s a great deal of Wi-Fi traffic. However, when you start trying to broadcast through walls, you may also need to drop your framerate to 30fps to maintain the integrity of the signal. And you’re not able to carry certain types of features over the signal. For instance, 3D content isn’t supported.

On the flipside, you will find full compatibility with HDCP 1.2, which means you’re ready to stream protected content that’s locked behind anti-piracy features. It’s pretty disappointing to try and play a movie, only to find out you can’t because your cable or adapter doesn’t support the signal. HDCP is something that people tend to overlook until it becomes a problem, it’s nice to know that it’s taken care of with the VS100. 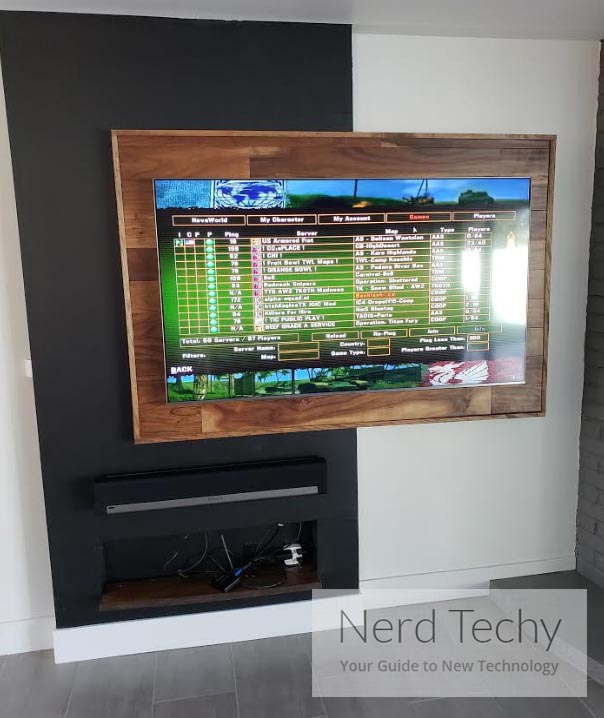 Some people only need to broadcast about 30ft. For others, 150ft might scarcely be enough. If you happen to need more than 150ft, there’s actually another version of this dongle that’s capable of reaching 500ft.

But unless you know exactly what you’re doing, it’s probably inadvisable to choose the 500ft version of this setup. Because it’s still based on the same IR technology, and it’s quite difficult to make the most of 500ft without any obstacles involved in your broadcast.

Even though the 500ft signal is technically much stronger than the 150ft signal, it’s not any better at making its way through objects which block line of sight. For people who aren’t underwhelmed by the 150ft version, the 500ft version will be gross overkill. 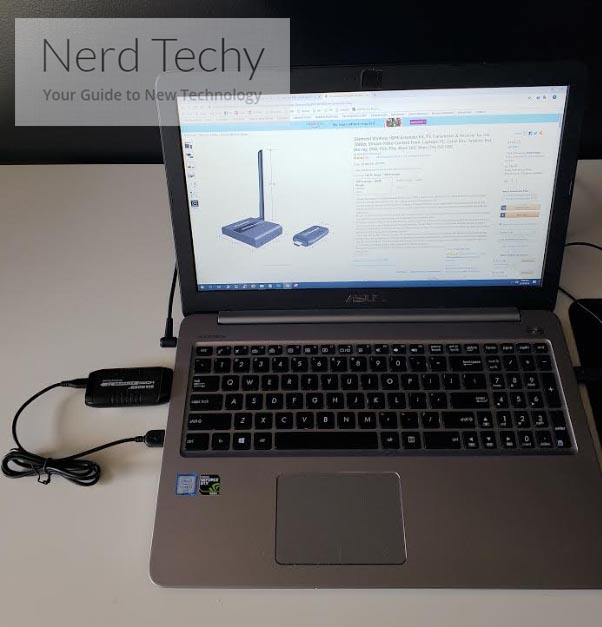 This kit includes the VS100 wireless receiver and VS100 wireless sender, and a detachable antenna. Because you can remove the antenna, it’s possible to replace it with a stronger alternative. Tough the stock antenna is pretty impressive already, which is why it can transmit so far. 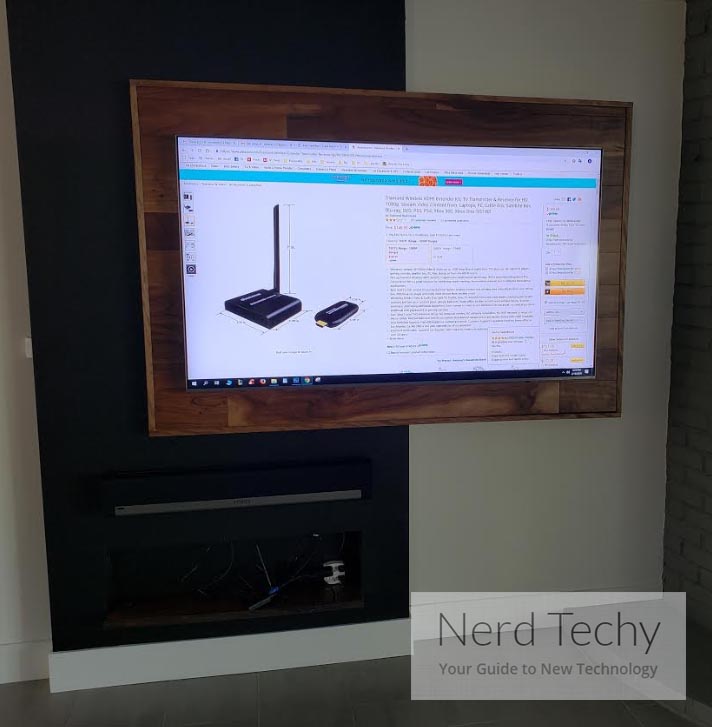 That’s pretty much everything you need for a smooth installation, right down to the special right angle adapters. It would’ve been useful to include adapters with more than one angle, but having one will accommodate most people. There are a couple of things you might consider adding to this kit.

There aren’t any zip ties included. Since this is a wireless receiver, there isn’t much cable management involved. But there’s still a little bit involved with the cables connecting this system together, so consider grabbing a couple zip ties, if you don’t have any laying around already.

Diamond Multimedia offers tech support through a toll free number. Some will be happy to hear its American based support. Additionally, Diamond offers a one-year warranty for their wireless HDMI sender/receiver. The warranty is unlikely to become necessary because wireless equipment like this can be built to last for an enormous amount of time. 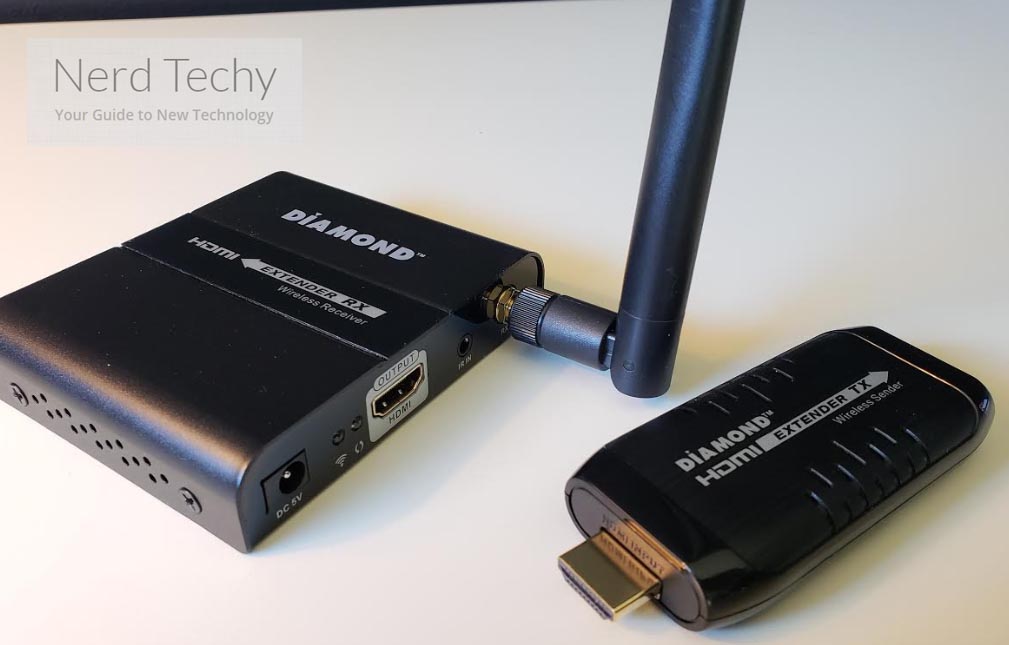 Who Should Choose the Diamond VS100?

The Diamond VS100 Wireless HDMI Sender/Receiver isn’t right for everyone. If you can make due with a receiver that’s only built for 30-feet of connectivity, then you could save a couple of bucks with a less powerful unit like the Diamond VS50 (USB-Powered) HDMI Extender. For people who are pushing beyond those shorter distances, the Diamond Wireless VS100 can serve admirably.

Some people end up being disappointed with the VS100. That’s mostly because they expect it to perform like a 2.4GHz Wi-Fi signal. While Wi-Fi can bounce around, this infrared technology is more like using the 5GHz band on a router, or like using a television remote. You really want direct line of sight, or the next best thing. You’d certainly encounter issues trying to transmit through thick objects, like a solid brick wall.

If you know what IR tech can do and have realistic expectations, and you’re not trying to run your HDMI signal through several large objects, then the VS100 is probably worth picking up. Its general ease of use is spectacular. You pretty much just plug in the receiver, plug in the sender, and get started with your broadcast. And it’s always easy to appreciate simplicity.