As the most common type of cable used in hard-wired Local Area Networks today, the demand for Ethernet is higher than ever. However, most routers have a limited number of available ports. Ultimately, this restricts how many devices can be plugged-in simultaneously. This is an issue in offices or homes that need to connect many computers and other network devices, without the use of WiFi. Ethernet splitting circumvents this problem by using another device to expand the network.

If you find yourself short on Ethernet ports, different options for splitting a connection include switches, hubs, and splitters. Each solution functions differently with their individual benefits and drawbacks. When extending a network, it’s important to consider factors such as reliability, speed, security and flexibility along with the number of additional connections. While Ethernet switches are the most flexible and popular choice today, it’s important to choose the option that will best suit your home or office needs. 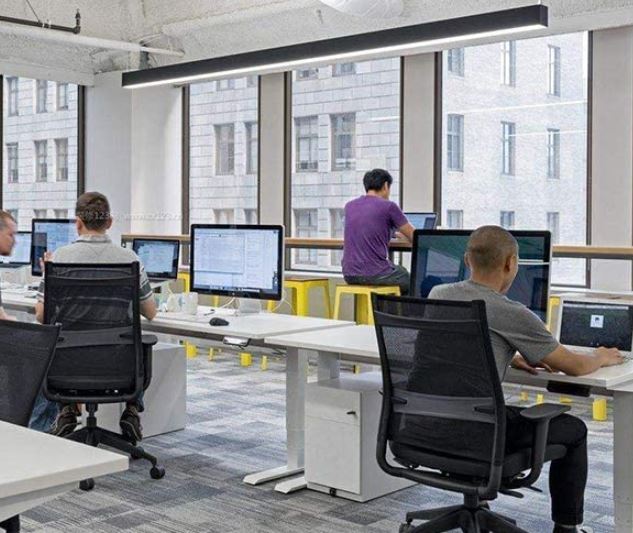 Why is Ethernet Important?

Unlike WiFi, Ethernet is a wired protocol. In a typical setting, Ethernet cables run from the modem or router to RJ45 ports on other network-connected devices. Many added benefits of Ethernet are due to the fact that network devices are directly joined by cables that leave them less vulnerable to connectivity issues or wireless security threats. Depending on a network’s protocol and size these cables can be coaxial, optical fiber, or twisted pair.

Despite the requirement for physical cables, Ethernet remains the global standard for connecting multiple devices over a single network for improved communication. These cables produce impressive network speeds and a very reliable connection. In addition, there’s typically less interference, latency, and security threats than other protocols. Ethernet is considered the most reliable solution for high-speed, confidential, and seamless data transmission.

What is an Ethernet Switch?

An Ethernet switch is a high-speed networking device that contains several additional ports. It’s the method of choice for Ethernet splitting due to its ability to split one connection into multiple with limited interference. The switch uses one port to connect to the router while all other locations are available for your network devices. Each individual client can be easily identified by its network address, allowing the switch to easily and efficiently direct traffic. Ethernet switches come in a range of speeds and sizes, including anywhere from 5 – 52 ports.

Switches split the network into smaller and less congested pathways through packet switching. This is a method of transferring small segments of data across the network, allowing for quicker and more efficient delivery. Devices receive the bandwidth they need without interference from other network traffic. This is because the connection to each entity is an individual pathway that does not slow down the overall network. The full-duplex communication provided by an Ethernet switch ensures that data can be sent and received at the same time, which improves the overall network speed.

Internet switches provide a faster network with limited interference which makes it a good choice for an environment with a significant amount of traffic from different devices. This is the most versatile solution to create more Ethernet ports as they come with different configurations and features to fit nearly any situation. These benefits are why Ethernet switches are the go-to option for Ethernet splitting.

However, there are some drawbacks to Ethernet switches that should be considered before installation. Although they provide much reduced interference in comparison to a Hub, switch users can still experience slowed connections when multiple devices are streaming at once. However, this connection will still be more stable and consistent than other wireless options.

Switches require some setup as well as a power supply, ultimately making them less ideal for the most basic splitting requirements. A power input is required to help divide the signal into a range of working signals that function at the same time. Finally, these devices are typically more expensive than hubs and splitters. There are many reasonably-priced Ethernet switches out there that are well-worth the cost when the additional flexibility and functionality is taken into account.

What is an Ethernet Hub?

Like Ethernet switches, hubs connect to the router with a single cable and produce multiple ports from the one connection. However, Ethernet hubs function by connecting multiple devices while making them act like a single network segment. These devices produce more available connections by repeating the network traffic that it receives.

As opposed to the communication method used by switches, hubs utilize half-duplex communication. This means that network devices cannot send and receive at the same time. Ethernet hubs, in comparison to switches, greatly reduce the connectivity speed and produce more interference between devices. This restriction is why hubs have been replaced by switches for almost all Ethernet applications.

Ethernet hubs successfully extend the network and create more connection points for all your devices. They’re also relatively cheap in comparison to more advanced switches. In some applications, a hub is actually preferred. For example, hubs can more effectively be used for protocol diagnosis due to their half-duplex operation. This allows the device to view all traffic sent over the network to any of the ports. Ethernet switches restrict port traffic and diagnostic tools will only be able to reliably view broadcast messages.

In most applications, hubs will not be the most efficient option for extending a network. Ethernet hubs result in high interference between separate network devices, slowed connection, and wasted bandwidth due to data collisions. This is particularly noticeable when running many devices at the same time. As Ethernet switch technology continues to improve, the prices of basic Ethernet switches are competitive with hubs, rendering them nearly obsolete. Although Ethernet hubs can be used to extend a network, other options are much more functional and reliable.

What is an Ethernet Splitter?

Ethernet splitters are the simplest method for dividing a network connection. The device, as the name implies, works as a coaxial cable transmission system to split one cable into two. They allow you to run a single cable throughout the walls and ceilings but still require two cables, one for each connected device. This eliminates the need to use two ethernet cables from one room to another but doesn’t necessarily increase the number of devices you can connect. Ethernet splitters must be used in pairs to unsplit the connection back into two cables for the two network devices. 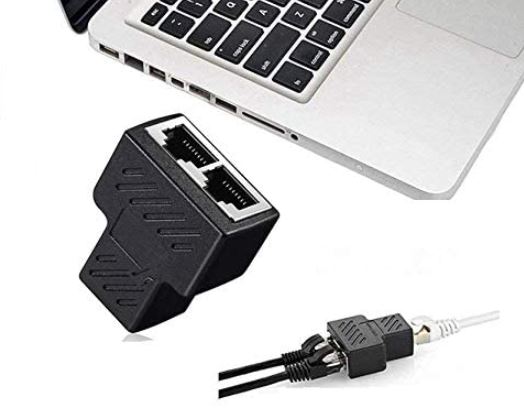 Ethernet splitters take advantage of the fact that 10 Mbit and 100 Mbit Ethernet only require four wires even though most cables, such as Cat 5e, contain eight. The splitter reduces the number of utilized wires and data throughput into two separate ports which means that the maximum bandwidth is 100 Mb/s.

Splitters are passive and do not require any sort of power supply like hubs and switches. They’re also the most straightforward option and are very intuitive to setup and use. Due to their simplicity, Ethernet switches are the cheapest option for splitting an Ethernet connection. Splitters are best used to reduce the number of long cables travelling between rooms in a home or office setting. 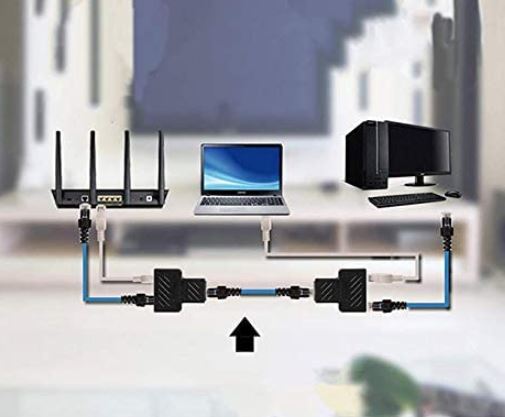 In most cases, a switch would be a better method for Ethernet splitting due to the drawbacks of splitters. Connected devices are limited to a slower network speed of 100 Mbit. With this method, there’s a limited number of devices as splitters do not necessarily increase the number of devices that can be connected unless used in conjunction with a switch. The destination router must have two available ports to use a splitter, which is not always the case. For extending a network connection, it’s almost always better to use an Ethernet switch.

In today’s rapidly advancing world, a strong and reliable network connection is important to access data at a moment’s notice. Ethernet’s strong connectivity has made it the top choice in the home and office. In order to provide enough available connections, new devices such as hubs, splitters, and switches are necessary to extend the capabilities of traditional routers. Switches are the method of choice for splitting an Ethernet connection although hubs and splitters have their own specialized functionalities.

Beyond personal usage, the impressive speed and functionality provided by Ethernet drives innovation. Readily available access to data enables new technologies such as the Internet of Things and an industrial Ethernet. The fully connected and reliable network system provided by Ethernet revolutionizes industries across the globe including healthcare, manufacturing, retail, and many more.