TechGuru May 16, 2019 Computers, Keyboards No Comments

Mechanical keyboards used to be pretty expensive. But as they’ve become far more common and far more popular, their pricing has really come down. That also means it’s been easier to get better features at lower price points, including gaming-grade wireless performance, and even a fully metallic design. But when you’re choosing something you might be using for ten years or more, it only makes sense to pay attention to details before making such a commitment.

Classically styled tray keyboards aren’t ugly by any stretch of the imagination. But over the past few years, tray designs have become less common in favor of top-plate keyboards. That is, keyboards with keycaps resting above a flat plate instead of a sunken tray. Though aesthetic isn’t the only difference between a top plate keyboard and a more traditional tray keyboards, it’s hard to deny that there’s a significant aesthetic difference. And one that tends to draw preferences. 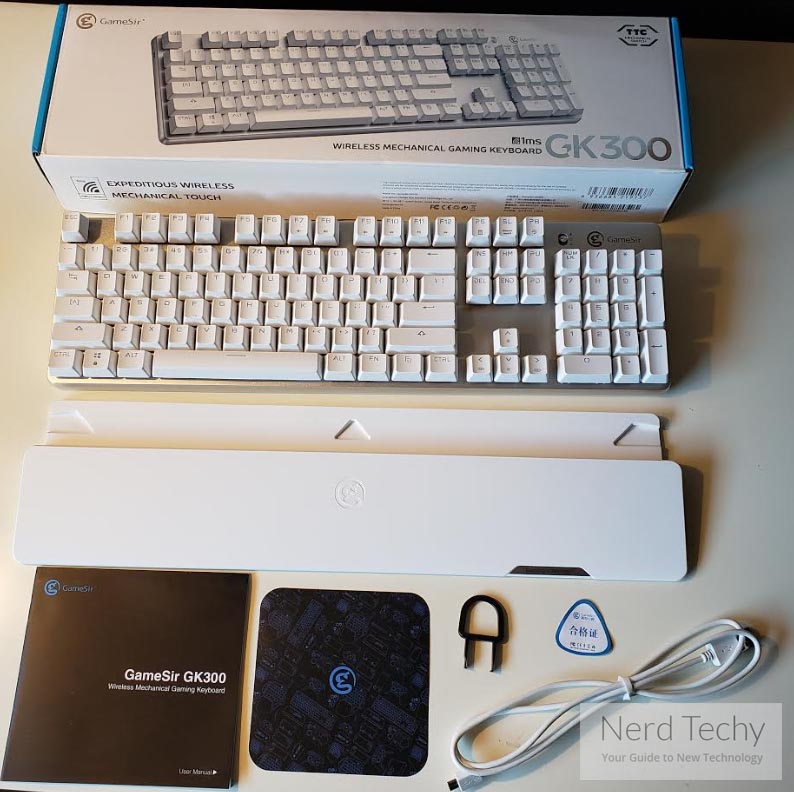 But again, this isn’t only a matter of style. Trays are much more difficult to keep clean of debris, while plate keyboards like the GameSir GK300 are much easier to clean. Of course, since it’s much easier to see debris that’s fallen into the keyboard, it’s actually more important to clean inside your board more often. So style does come with its own type of costs.

Logically speaking, full sized keyboards are a little trickier to choose than smaller keyboards. Simply because there’s more room for error when there are more keys on the board. But the GameSir GK300 doesn’t seem to run headlong into any serious errors. 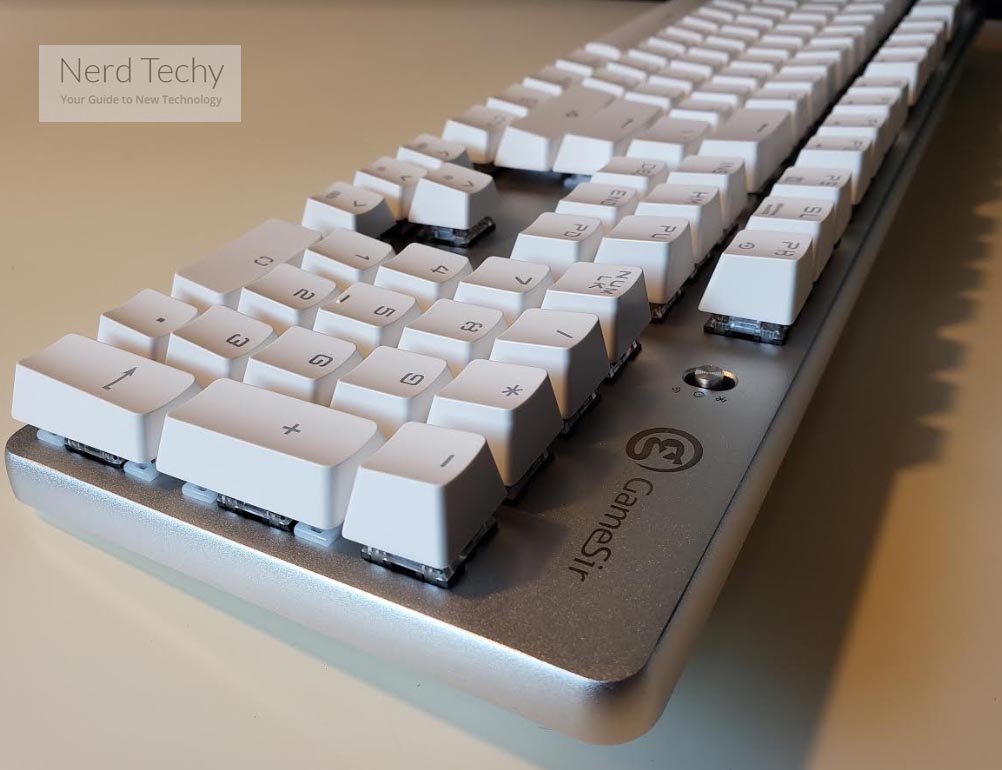 As you can tell, this is a full sized board, along with a ten key digit pad. But it’s not an oversized board. Unlike some of the larger monstrosities you’ll see from brands like Logitech, you won’t find a bunch of offset macro keys that take up a bunch of space. Though if you do need to make customized changes to bindings on the board, you can do that.

The aluminum alloy top plate makes for a great frame. Though parts of the board are still composed of ABS plastic, the board doesn’t flex in your hand. It feels just as sturdy as a chunk of aluminum ought to feel, even though there’s really only an aluminum top plate giving it that rigidity. 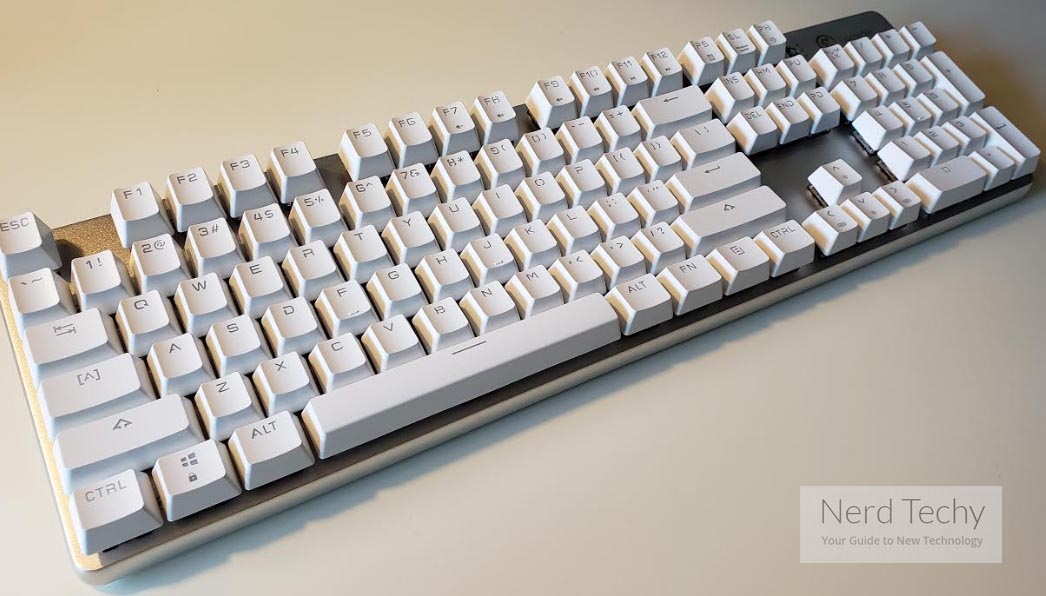 Along the bottom, you’ll find non-slip rubber mats to help maintain the position of the keyboard on whatever surface you place it on. Pretty standard stuff, but it’s worth noticing these grips are slightly oversized. That makes them much better at keeping traction when you’ve got other stuff on your desk.

You may have noticed the GK300 includes an ergonomic wrist rest. It’s easy to underappreciate the presence of a wrist rest, but it can be really helpful during longer use sessions. That makes them appropriate for a number of different gamers. 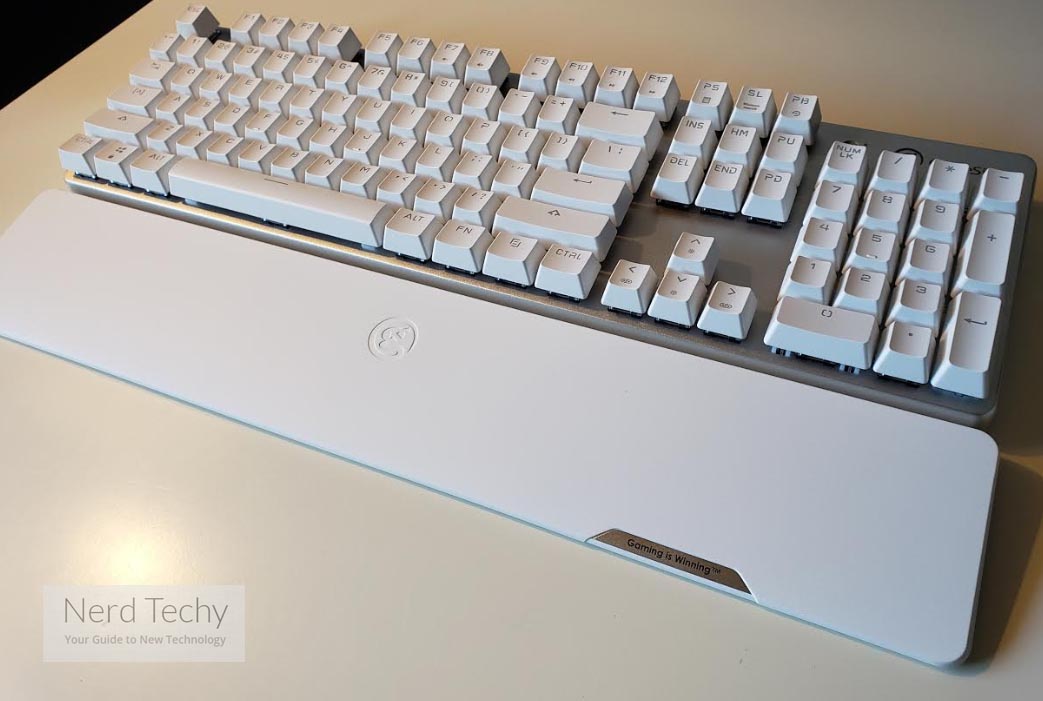 Though with that said, cushioned pads are superior if you’re serious enough about comfort, and are willing to pay for them. In any case, the wrist wrest is removable so you can pop it off if you’re short on space, or if you hold your wrists with a posture that doesn’t require a pad.

In the not so recent past, wireless connectivity was pretty poor for gamers. Because the kind of latency that’s passable for browsing the web isn’t the same as the sort of latency that’s passable for playing a variety of different games. But in recent years, wireless technology has really caught up quite a bit. Nowhere is that clearer in than in the raw stats — you’ll find the GK300 was made to support a wireless connection on 1ms latency.

That’s basically the same as having a wired connection because it’s virtually impossible for a human to distinguish it from a wired connection. Of course, having a connection that crisp can put constraints on the battery lifespan because it means your keyboard needs to be in almost constant communication with whatever devices it happens to be connected with. Fortunately, GameSir included a number of battery conserving features that really help stretch out the lifespan as far as possible. But we’ll get to those a bit later. 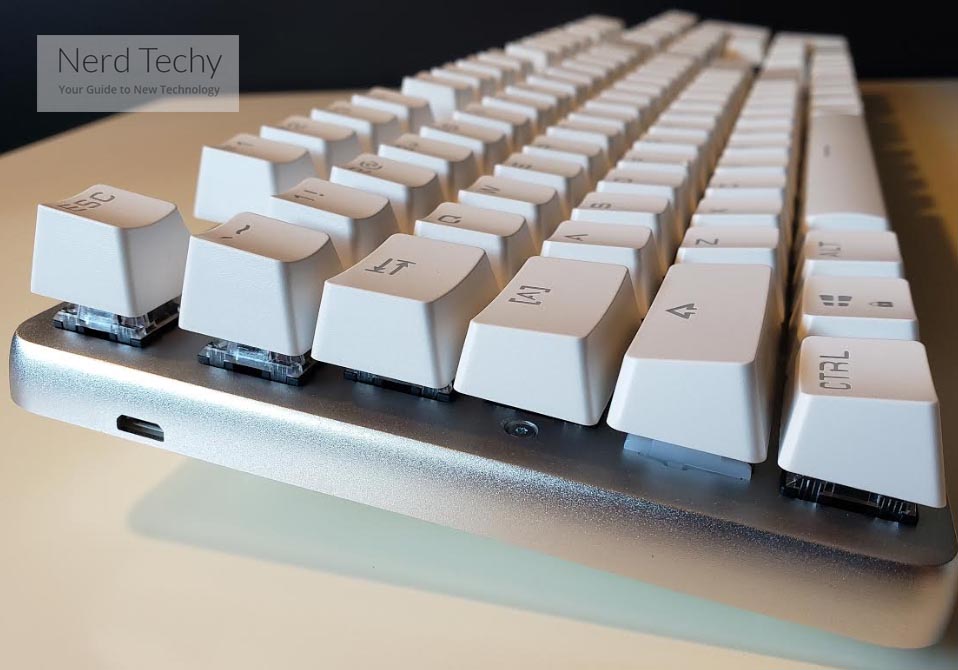 Okay, what kind of switches does the board use? As it turns out, they’re running their own proprietary TTC mechanical blues. Following industry nomenclature, these are basically an imitation of Cherry Blue switches. Blue switches are switches with all of the toppings. They’ve got a tactile bump when the switch is triggered, and they’re extra clicky-sounding. That might not make you the most popular of your roommates, but it’s a favored choice among typists and other people who spend a great deal of time working on their keyboard.

The lifespan of these switches is estimated to be 50 million keystrokes. In practical terms that basically means you’re able to regularly hammer away at this keyboard for a few decades. You’ll have a problem with batteries long before you have a problem with the switches. That’s also pretty much the same lifespan you’ll find with most Cherry mechanical switches, though they are making some rated at 100 million keystrokes these days. 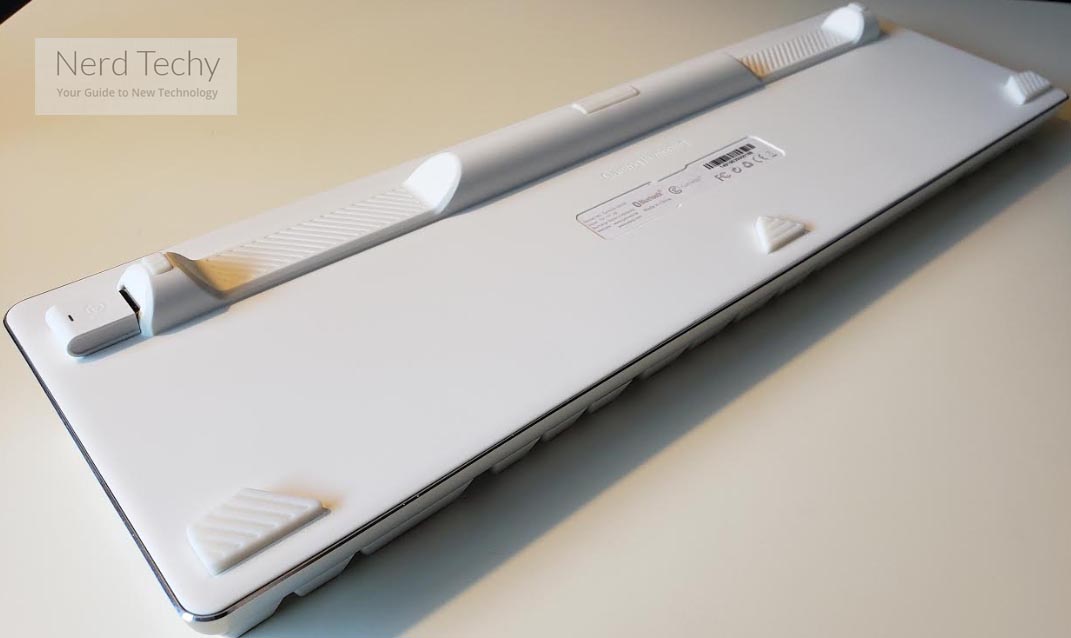 Similar to basically any modern gaming keyboard, you’ll find the GameSir GK300 makes use basic anti-ghosting technology. That includes 10-key rollover, but not for inputs beyond 10 keys. Then again, unless there’s a cat sleeping on your keyboard, it’s pretty unlikely you’ll really need more than 10-key rollover, though.

Bluetooth 4.2 carries the wireless signal, which is pretty good news for both stability and compatibility. It also means you can use this keyboard with Linux, Mac OS, Android, Windows OS, and so forth. However, it does mean the devices you want to connect with need to have Bluetooth support. If you’ve got a desktop without a Bluetooth chip, then you’re not going to be able to connect this keyboard.

Backlit keycaps are another thing that have become incredibly common in recent years. Some people look at them as a requirement, if only for their cool style. Others could care less, or even prefer blank keys. But gamers tend to prefer LED-based boards more than serious-looking boards, so it’s no great surprise that the GK300 makes use of some fairly extensively covered LEDs. 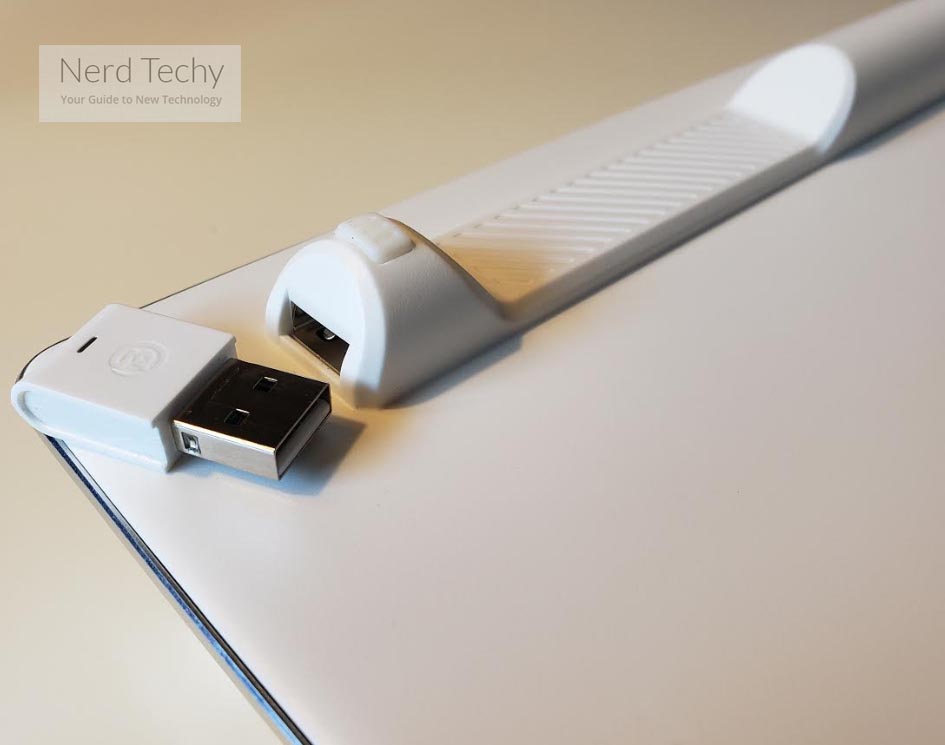 Notably, they’re not actually RGB LEDs. Instead, they’re monochrome 6500K white. That’s basically true daylight brightness. It’s gorgeous, but it’s also something you want to avoid during the later hours of the day. Because exposure to the blue light present in that spectrum can help keep you awake at night.

Which is why it’s worth noting that it’s possible to flip the lights off, and the GK300 can support several levels of brightness. If you do want to use the lights, you’re able to choose between wave and ripple effects, steady light, and breathing effects to keep everything looking as cool as possible. 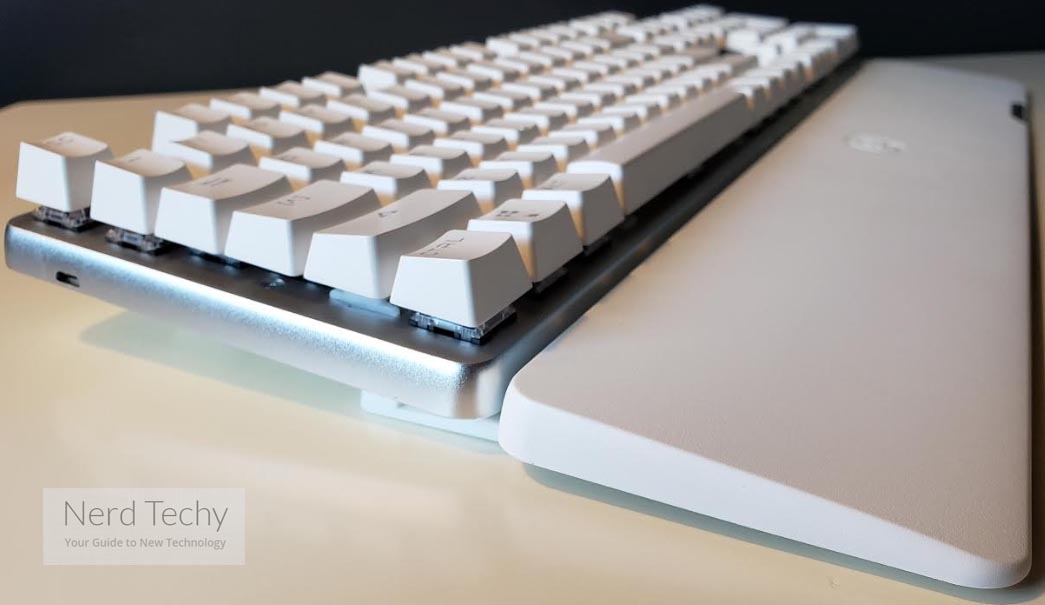 Apart from the LEDs, the keycaps are nothing special. The lettering printed on the keycaps will eventually wear away. Because these are basically clear plastic that’s been painted carefully to avoid avoiding the spaces around the lettering.

It will probably take about two or three years of steady use before the lettering is worn away, but it will happen. And unfortunately, because you’re using TTC switches instead of something more standardized, you’re not going to be able to find keycap replacements easily. 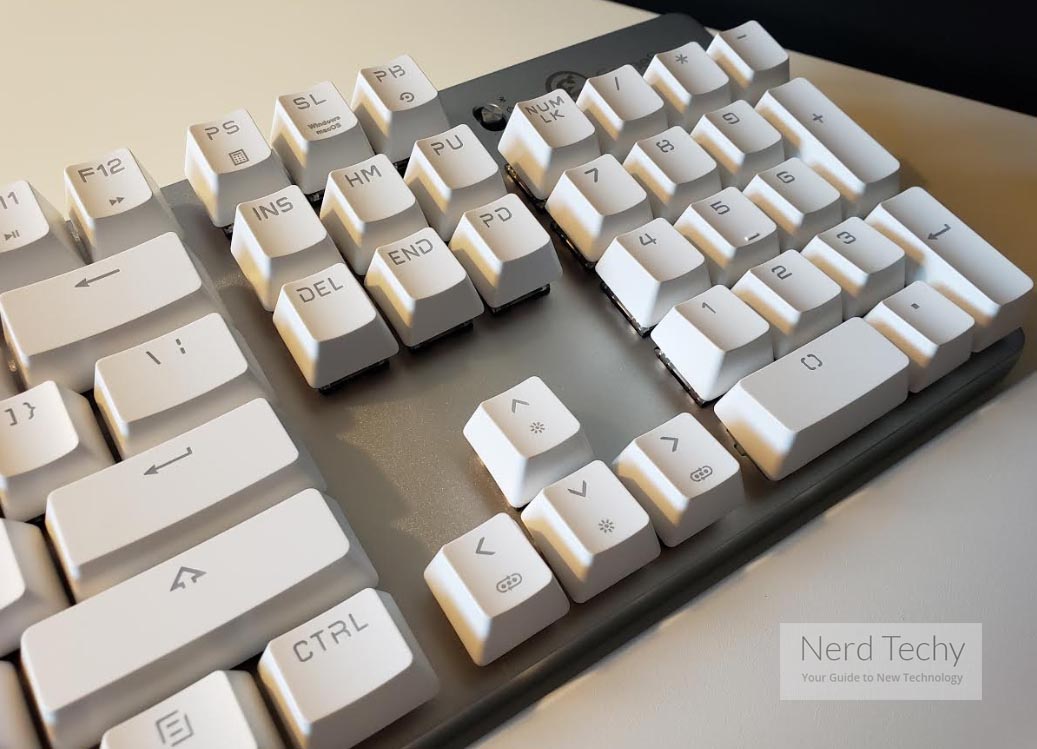 The GameSir GK300 is built around a fairly strong 3600mAh battery, which is also a big part of what makes this board feel so hefty in your hands. Most of the weight is the aluminum chassis, but the battery does contribute. But the battery performs far better than you’d think. Mostly because it goes into sleeping mode after one minute of no operation. Likewise, the backlight will flip off after 30 seconds of not being used.

As a result, the battery should able to get several weeks’ worth of wireless connectivity before you need to think about recharging the board. Unless you’re continually typing without breaks, you really shouldn’t expect a shorter battery lifespan. However, if you are someone who’s using the board 8 hours a day for gaming, you might be able to expect as little as 80 hours of playtime before having to recharge this battery. Of course, that figure will also partially depend on the LED brightness. 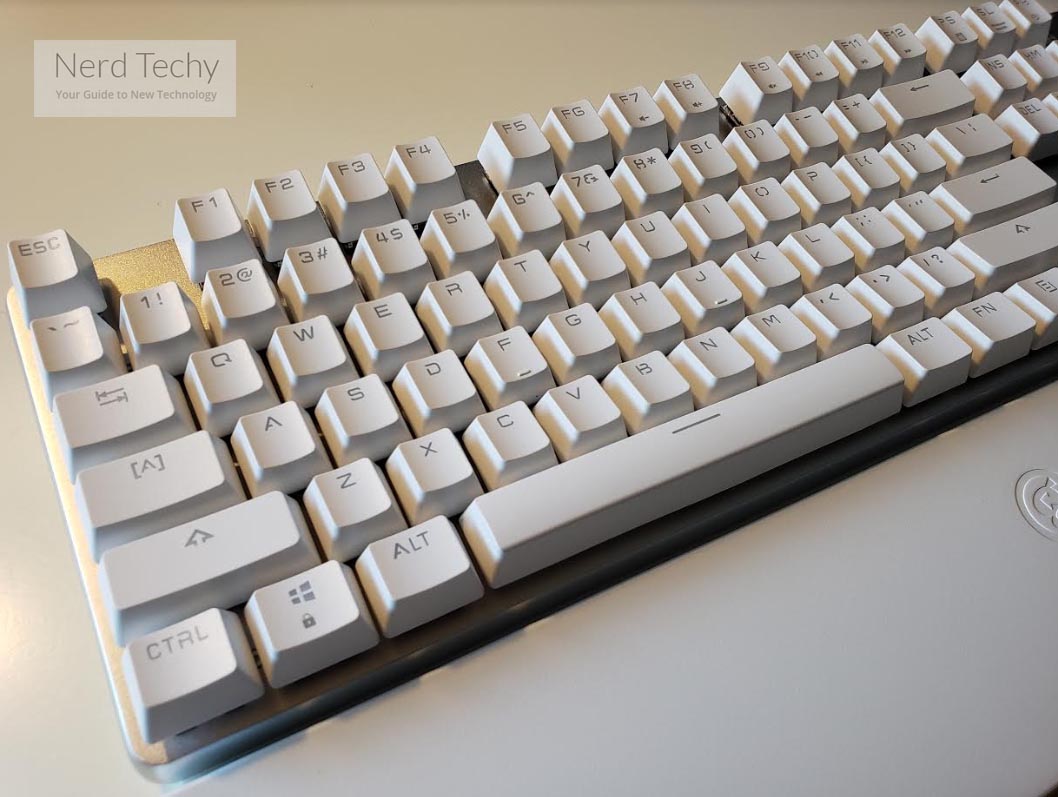 The GK300 basically combines three things. The first element is this board is relatively cheap. An entry-level mechanical board typically starts around $50, and that’s before you start thinking about things like LED keycaps or wireless connections. The most expensive boards like this one can easily run more than $300. So the GK300 has a very approachable price for what it brings to the table.

The craftsmanship of the board is solid and respectable. If you’ve tried one of the GameSir console controllers before, you can expect basically the same level of quality. The aluminum top plate feels great to type into. It’s a small shame these aren’t standard Cherry switches, since replacing the keycaps will be more challenging.

But if that’s not something that bugs you, the GK300 could be worth picking up. For people who are on a budget, it’s almost certainly going to be the right choice. For someone looking for a keyboard they can use for the next 10 years, this isn’t it. But given the built-in battery, there’s a limit to how nice you want the board to be. And the GK300 is pretty close to perfect in that respect.