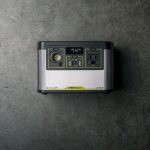 Just a couple of generations ago, within living memory for some people, electricity was a luxury. Forget about smartphones, PCs, or internet access. As recently as World War II, less than half of American homes were even wired into the electrical grid. Now, if the power goes out for more than five minutes, people start to suffer from panic attacks. This isn’t because we’ve gone soft. It’s because we depend on our devices for everyday life.

Electricity is so important to our everyday lives that we more or less take it for granted. Walk into a coffee shop? There’s a row of electrical outlets, sometimes with built-in USB jacks for your convenience. Waiting in an airport terminal? Chances are that there’s a USB charging station to keep your phone topped off. Even low-budget carriers like Greyhound have power outlets on their busses. Walk through any commuter train, and you’ll see at least half of the passengers zoned in on their smartphones.

With electricity being this ubiquitous, why would you even need a portable power station? One possible reason is to prepare for emergencies. Natural disasters and even random events like the 2003 Northeast blackout can leave us without power for days. Not to mention, you may plan on being without a reliable power source. For example, you may be on a camping trip. Good luck finding a USB charger at your local state park.

Now, for many of these situations, a gas generator might be sufficient. But using a gas generator requires a source of fresh gasoline – not always a guarantee. And if you’re on the road, a gas generator can be too large and heavy for convenience. In all of these cases, a portable power station is your best choice.

Today, we’ll be reviewing the Goal Zero Yeti 200X, a powerful little beast that can keep all your devices topped off. But just because it’s powerful doesn’t necessarily mean it’s worth spending your hard-earned money on. We took a closer look, to see what it really has to offer. We’ll tell you how it’s built, how it works, and how to use it safely. After that, you’ll be well prepared to make your own judgement. 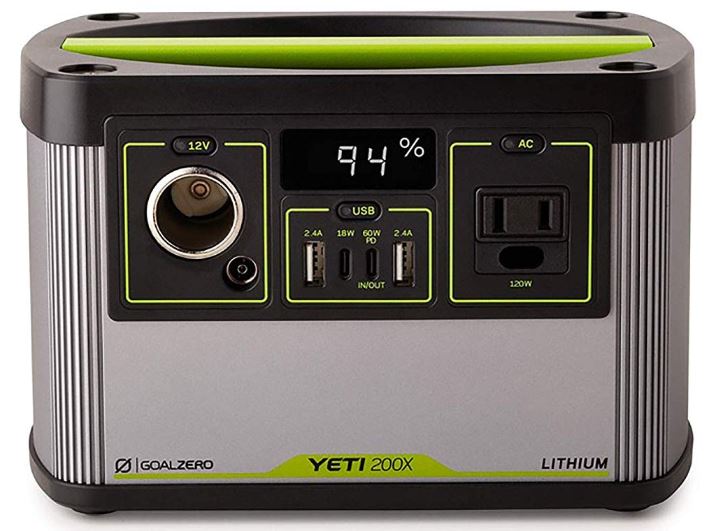 The first thing you’ll notice about the Goal Zero Yeti 200X is that it’s relatively compact compared to similar devices. It’s only 10 inches wide, with a 9.5 x 9.5-inch height and depth. It also weighs only 5 pounds, about the same as a standard clay brick. This doesn’t exactly make it pocket sized, but it does mean it’s relatively easy to transport. At the very least, you can throw it in your trunk without it taking up half of your available storage space. And it’s relatively unobtrusive on a garage shelf, or even in a utility room. This means it’s easy to keep plugged in, ready to go wherever and whenever you need it.

The Bulk of the 200X case is constructed from high-quality anodized aluminum, with reinforced ribbing on the corners. The color is a powder-coated gray, and it’s tough enough to handle a few bumps and bangs. The top and bottom of the case are made of black, rubberized plastic that’s also designed to take a beating. The bottom in particular is well-constructed, with little rubber feet that prevent the 200X from sliding around unexpectedly. The top casing is similarly durable. In the center, there’s a deep indentation, with a fluorescent green handle that’s easy to find in low light. 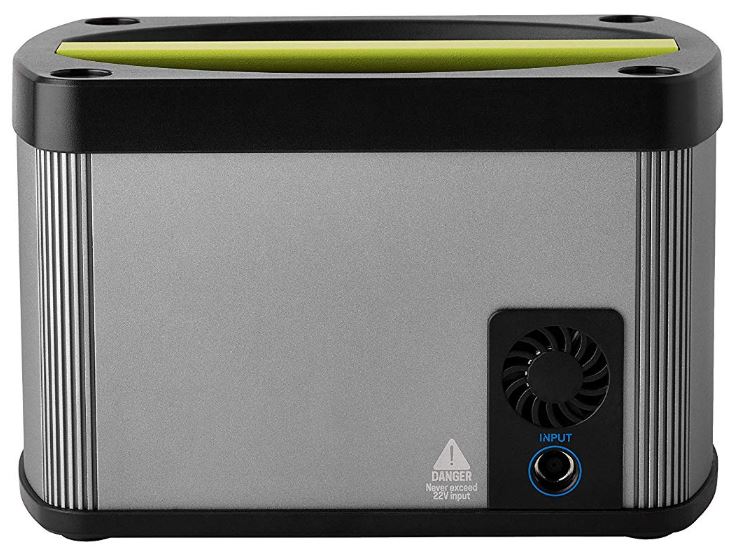 Extending down from the top casing is a black front panel that contains all the 200X’ outputs. We’ll talk about them in more detail in a second, but suffice it to say that there are several. Each output is outlined in fluorescent green paint, and they’re all clearly labeled to avoid any confusion. There’s also a bright green stripe across the bottom of the front, with product labeling and logos. On the back, there’s a small black panel with a cooling fan vent, as well as the power input. An AC adapter is included in the kit, so you’ll be ready to charge the 200X right out of the box. Make sure to charge it before use. On arrival, the battery will only have ¼ or less of its total charge.

One thing we couldn’t find out about the 200X is whether or not it’s water-resistant. Goal Zero doesn’t provide any IPX rating, and we weren’t about to take any chances. The lack of a rating is disappointing, since you’re probably going to use it outside. We imagine that there’s some kind of water resistance. But without a rating, we were left shrugging our shoulders.

If you’re looking for a beefier unit, Goal Zero manufactures several different models. A while back, we reviewed the Goal Zero Yeti 3000. It’s fairly powerful, but that much power requires a lot of bulk, so it’s not as portable as the 200X. 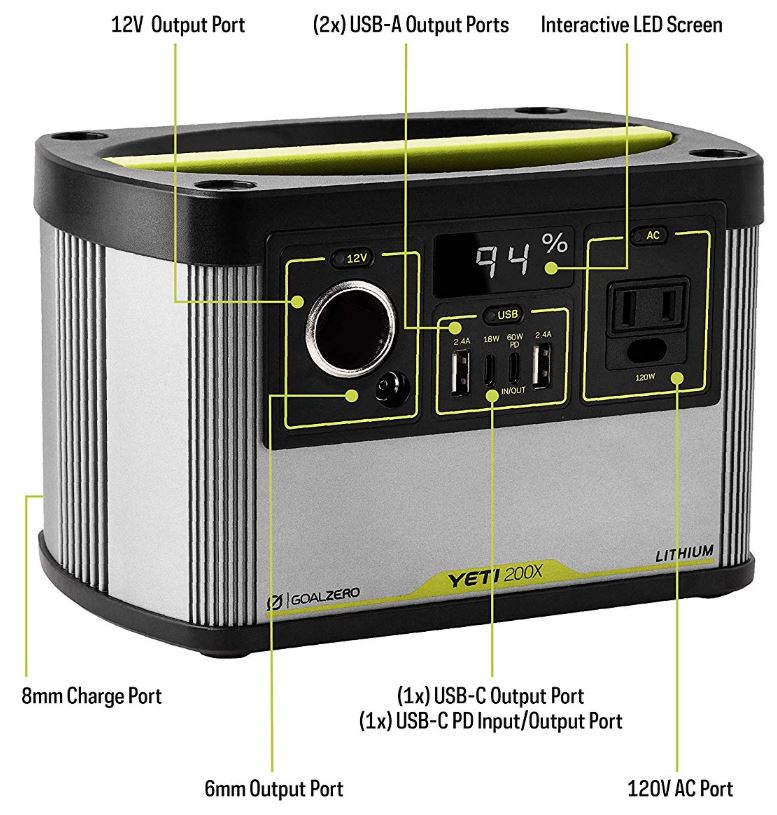 The Yeti 200X has a total capacity of 37,400mAh. This is a lot of juice, but not a lot for the size. However, a lot of the case is occupied by ports and wiring that you won’t find on smaller power packs. Regardless, by any objective standard, it’s a fairly large battery. The easiest way to keep it charged is to plug it into a wall outlet. With this method, you can charge the 200X fully in only 4 hours. You can also charge the battery in 4 hours by plugging into your car’s cigarette lighter. A 12-volt power adapter is included in the kit.

In addition, the 200X can also be charged from a solar panel. While there’s no panel included in the kit, you can easily plug one into one of the front USB ports. That particular port is conveniently labeled as “in/out”, so there’s no confusion. The exact time it takes to charge via solar panel will depend on the size and capacity of the solar panel. 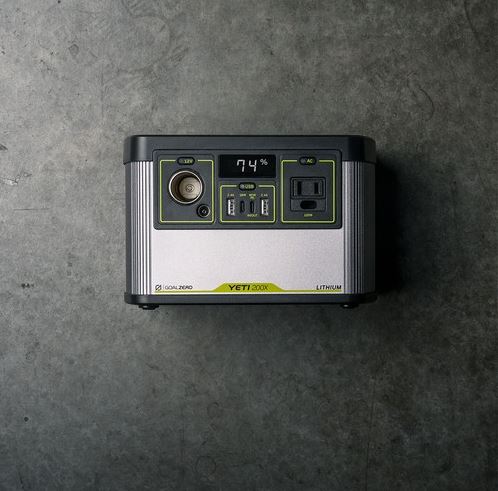 On the front of the unit, from left to right, you’ll find a 12-volt car-style port, followed by a 6mm output. This output is a bit unusual, but if you’re charging devices that take 6mm, 12-volt power, you’ll appreciate it. Next, you’ll find a pair of USB Type-A ports, a USB Type-C port, and a USB PD port. The PD port is the one labeled “in/out”. Finally, on the far right, there’s a standard 120-volt three-prong AC outlet. Smack in the middle of the front panel, there’s an LCD display that shows the current battery level. 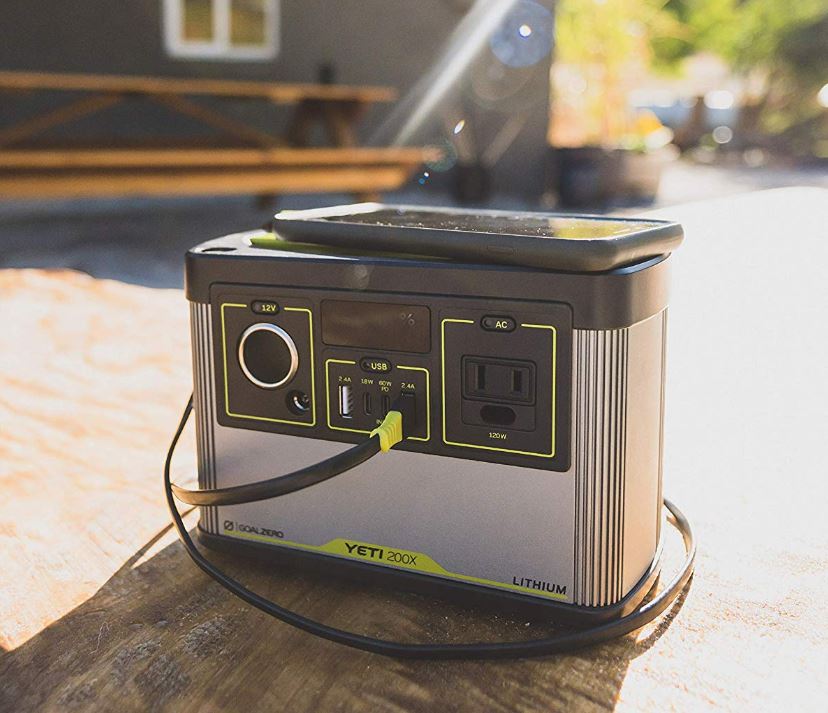 Of course, not everybody needs these many options. If you just need to keep your phone or laptop charged, you might want to consider a smaller power pack. For a good example, take a look at the Goal Zero Sherpa 100AC. It’s about the size of a paperback novel, and holds an impressive 25,600mAh charge.

One advantage of any portable power pack, including the Yeti 200X, is that they require little maintenance. Gas generators need to be run from time to time to keep them from seizing up. You also need to ensure that they have fresh gas, change the motor oil, and keep the spark plugs clean. By contrast, all you need to do with a portable power pack is ensure that it stays topped off. 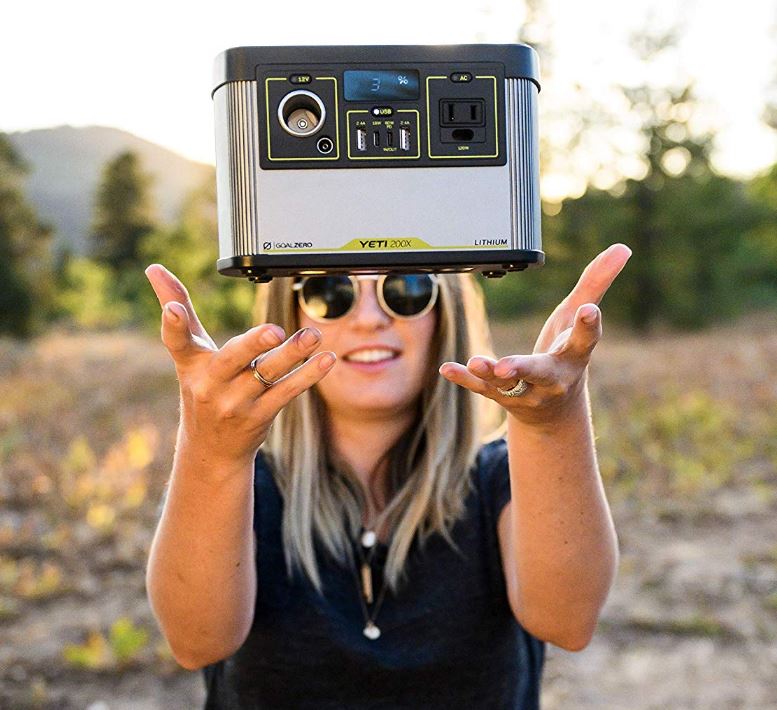 This doesn’t mean that there’s absolutely zero maintenance, though. Lithium batteries will naturally lose their charge when they’re not in use. For example, the 200X will lose about 50 percent of its charge over the course of 3 months. For this reason, the most reliable way to store it is to simply leave it plugged in. After all, if your 200X is always plugged into the wall, it’s guaranteed to have power when you need it. This is perfectly safe. The 200X has smart circuits that prevent overcharging, a significant upgrade over old-school power packs.

The Yeti 200X is more than capable of off-grid use. However, if you’re going to use it at your cabin or cottage, don’t leave it there for a long period. You’ll want to have it at home, and keep it fully charged, before you go out in the wilderness for the weekend. This isn’t just a safety issue; damage due to total discharge is not covered by Goal Zero’s warranty. Assuming you keep it reasonably well charged, the 200X is rated for 500 charge and discharge cycles. Even then, it will maintain 80 percent of its original capacity. Suffice it to say that you can use the 200X for a long, long time. 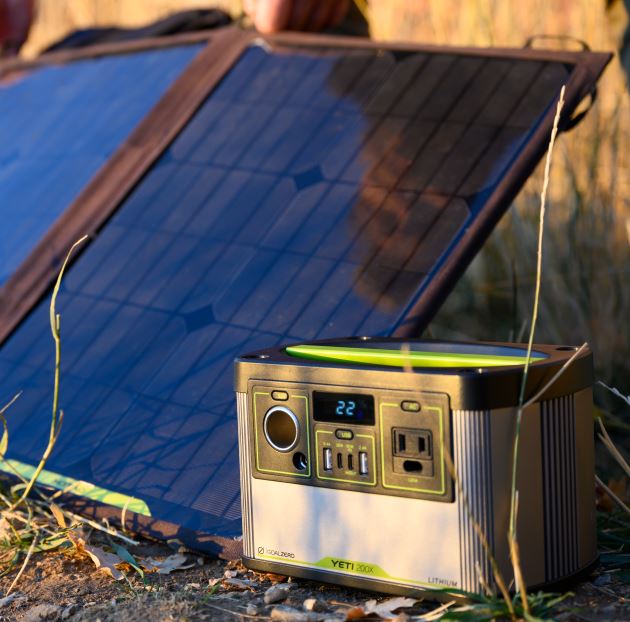 In terms of battery performance, the Yeti 200X is rated to operate between 32 and 104 degrees Fahrenheit. This should be enough for the majority of uses. However, you’ll run into trouble if you’re trying to use the 200X in exceptionally cold conditions. In this case, Goal Zero recommends putting the 200X inside a small Styrofoam cooler. In an enclosed space, the heat from normal operation will quickly warm up the cooler and, by extension, the unit.

At the end of the day, the Goal Zero Yeti 200X is well worth the investment. It’s a bit large for the capacity, but not when you consider the large number of outputs. It’s also sturdily constructed, with an anodized aluminum case that can take a lickin’ and keep on kickin’. We would have liked to see an IPX rating, though, which is a major oversight on any electronic device. 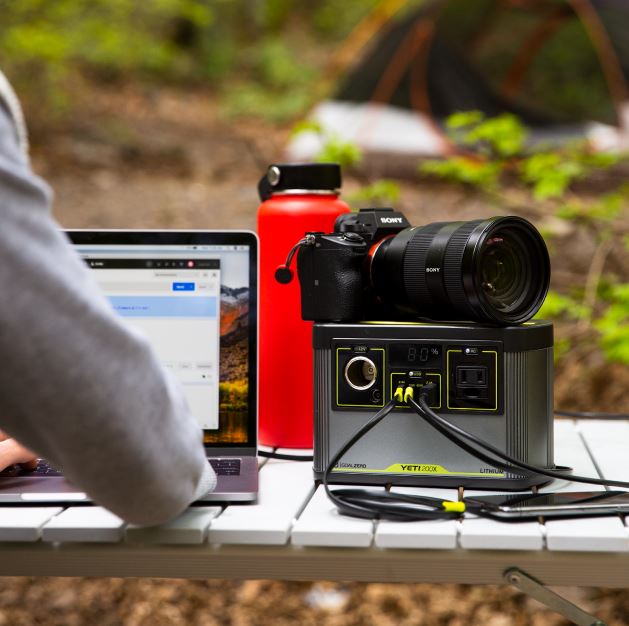 In addition, we really liked the wide array of power outputs. Whether you need a 12-volt output, a USB output, or even a standard AC plug, the 200X has got you covered. It’s also nice to be able to charge from a variety of sources. The 120-volt and 12-volt charging options are a great start. But the ability to use a solar panel is also much-appreciated. After all, if the electrical grid is down, you want to have a backup for your backup. All in all, the 200X is a flawed, but still worthwhile power pack.