A quality home theater projector in the correct environment can transform your home into a comfortable, personal movie theater. While large televisions run in the 50 to 70-inch range, even average projectors can create an image of 100 to 120 inches or more. Doubling the diagonal screen size means quadrupling the actual screen area, so the difference between a good-sized TV and an average sized projector image can be staggering.

If you noticed, we said a quality projector in the correct environment. First, you can’t assume a projector will work just anywhere. Unlike TVs with bright backlights, a projected image can easily become washed out by ambient light sources. Sun exposure or bright lights in a living room would require a projector with an extremely high lumen output to remain visible. Even worse, due to the properties of light, there is a fixed amount of illumination coming out of your projector. If you make the image larger, the fixed amount of light spreads over the larger area resulting in a dimmer image.

The quality of a projector can refer to both the initial quality of the image it produces and the durability and longevity of the device itself. While it’s relatively easy to compare initial quality, it can be significantly more challenging to estimate how any electronic device will hold up over time.

While high-end projectors can cost many thousands of dollars, GooDee Electronics offers up the extremely budget friendly YG500 Mini Portable Home Theater Projector. This certainly won’t be the projector to create your own top of the line screening room, but depending on your needs, you may find a compact, budget projector could be right for you. 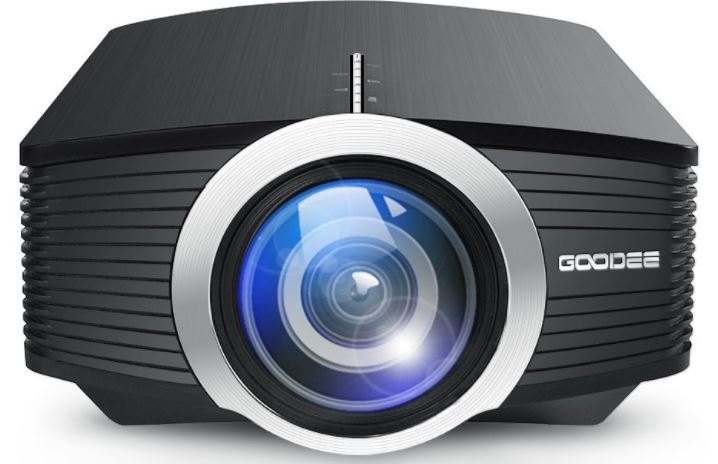 Before jumping into our product review, it’s important to spend a minute discussing GooDee electronics. You’re likely used to most electronics manufacturers having a website, product support pages, manuals, and even technical support. You won’t find any of that from GooDee.

In fact, it seems that the company’s entire presence solely exists on Amazon. A bit more digging uncovered some other information. We found that the model number YG500 was used on projectors with identical specifications from a number of differently named manufacturers.

While this may surprise some people, if you have experience in the electronics industry, you’ve undoubtedly encountered this practice before. It’s known as “white labelling.” Essentially, a company or factory decides to produce a product, but instead of taking it to market directly, they allow 3rd party companies to purchase the products for resale and will brand them with any name or logo desired. This can result in many identical products hitting the market from apparently different companies. 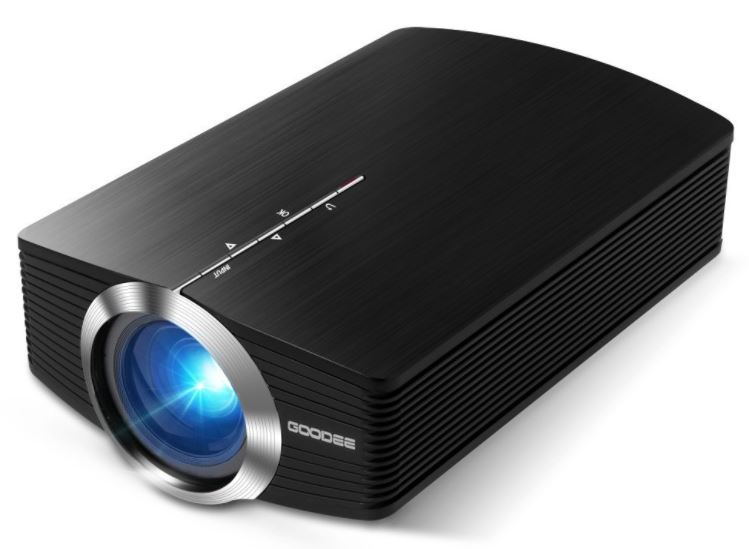 Now, in and of itself, this practice isn’t good or bad. Ultimately, it depends on the quality of the product and the level of support provided by the 3rd party seller since you’re unlikely to ever discover the true manufacturer. Even if you did, the white label agreements generally absolve them of any responsibility to provide product support.

In the process of reviewing this projector, we attempted to find more information and detail from GooDee electronics. We could not locate any GooDee website, phone number, or other contact information. As such, our data about the product is limited and any attempts to contact the seller must pass through Amazon.

This does concern us slightly, but given the very low purchase price compared to other projectors, we would consider it a reasonable risk.

Unlike some other projectors, the GooDee YG500 has a rectangular shape but projects from one of the small ends of the rectangle. As its name suggests, this is certainly a miniature projector. Measuring just 9.0 x 5.8 x 3.1 inches and weighing 2.2 pounds, this projector isn’t much larger than a thick paperback book. We found it very easy to toss in a small bag or suitcase which would come in handy for travel. 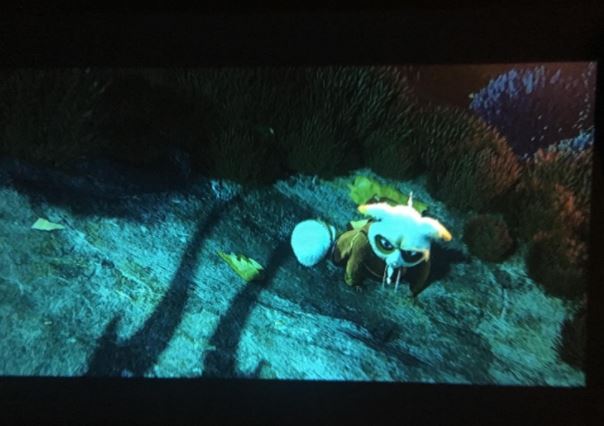 Stylistically, we found the projector attractive enough. It has black vented plastic around the outside edges and a brushed black finish on top. A silver ring surrounds the lens while a single row of function buttons extends partially down the middle of unit.

The GooDee YG500 features a number of connection options. While HDMI remains the most universally accepted video and audio port, GooDee also includes an older VGA connector, also known as DE-15 or D-sub, for connecting to devices without HDMI output. SD cards and USB drives are also supported, while MHL compatible smartphones or tablets will enable you to share videos, photos, and play games on a big screen.

An integrated 2-watt speaker provides built-in sound should you choose to watch away from a higher powered speaker system. Generally, for any in-home projector we would advise running audio and video through a receiver in order to hear on larger speakers. While sound quality of a built-in speaker can’t possibly reach that of even a halfway decent home audio setup, it’s nice to have the integrated option particularly on a portable projector. While it’s certainly feasible to tote around a book-sized projector, dragging along a stereo receiver and speakers would present a considerably larger challenge.

Reading the seller’s description of video specifications immediately caused a red flag to go up for us. GooDee states that this projector “supports 1080p” while also claiming a “cinematic viewing experience with highest resolution 800 x 480p.” These statements are confusing at best and intentionally misleading at worst. 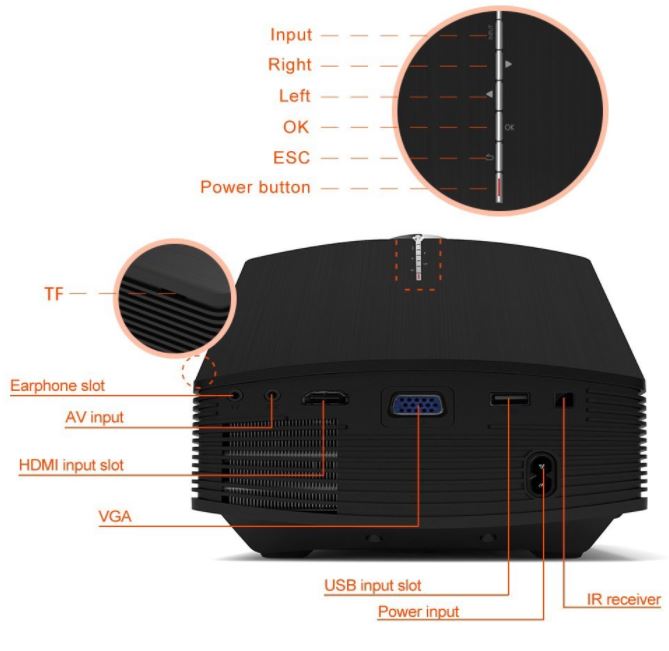 Essentially, they mean that the projector can accept 1080p source video, but the quality downscales to a maximum output resolution of 480p to your screen. Calling this “cinematic” seems dubious since 1080p screens and Blu-Ray have been available to consumers for over a decade. Unsophisticated customers may simply see the “1080p” designation and not understand that this isn’t a Full HD projector.

While consumers often overvalue the differences between 720p, 1080p, and 4K at standard viewing distances, 480p just isn’t a lot of pixels. Assuming an 80-inch diagonal screen, you would need to sit nearly 25 feet away before the quality loss disappeared. At 130 inches, GooDee’s stated maximum screen size, you’d notice quality loss unless you sat a massive 38 feet away. 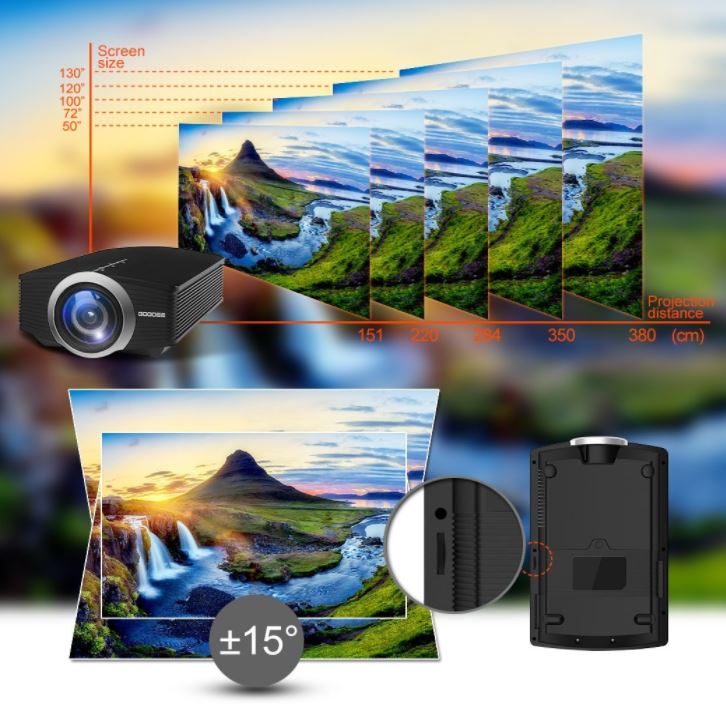 We further grew suspicious with the claim of 1800 “luminous efficiency.” What GooDee actually means is more complicated. The projector includes a 1200 lumen light source, but due to the projector’s configuration the light has a direct path through the screen to the lens as opposed to other projectors with internal mirrors. They feel that this makes their 1200 lumen lamp equivalent to an 1800 lumen lamp in a different projector configuration. Whether this proves true or not, it’s a bit of a misleading way to state the lamp specifications.

Finally, GooDee claims that the projector includes a “Built-in subwoofer with bass” which allows you to “Enjoy the movie like you are in the theater.” Now, while we did feel that it had acceptable audio for a built-in speaker, certainly better than a tinny smartphone speaker, the claim of theater-quality sound just seems ridiculous. While possible that the small “subwoofer” has the capability to respond to low frequencies, it just isn’t big enough to produce effective bass. 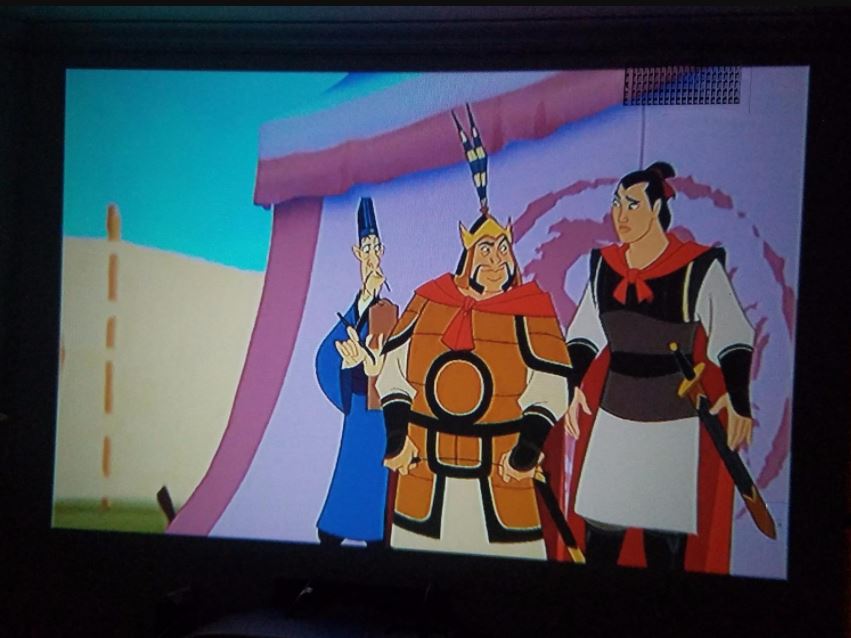 Keeping that in mind, the diminutive GooDee YG500 feels more acceptable. The picture was brighter than some other ultra-portable units we’ve tried, although regardless of how GooDee calculates “luminous efficiency,” it’s best suited for dark environments. Color and refresh rate were also acceptable enough not to present a significant problem but didn’t stand out as impressive either.

Despite our best efforts, it’s very hard to accept 480p video. We’ve watched HD content for so long at this point that returning to standard definition feels like we might as well have rabbit ears on top of the TV. That may sound overly dramatic, but the difference in quality can’t be ignored. It’s possible that some people, particularly those with less than stellar vision, may not mind the pixelated video, but anyone who appreciates quality audio visual products will immediately notice. 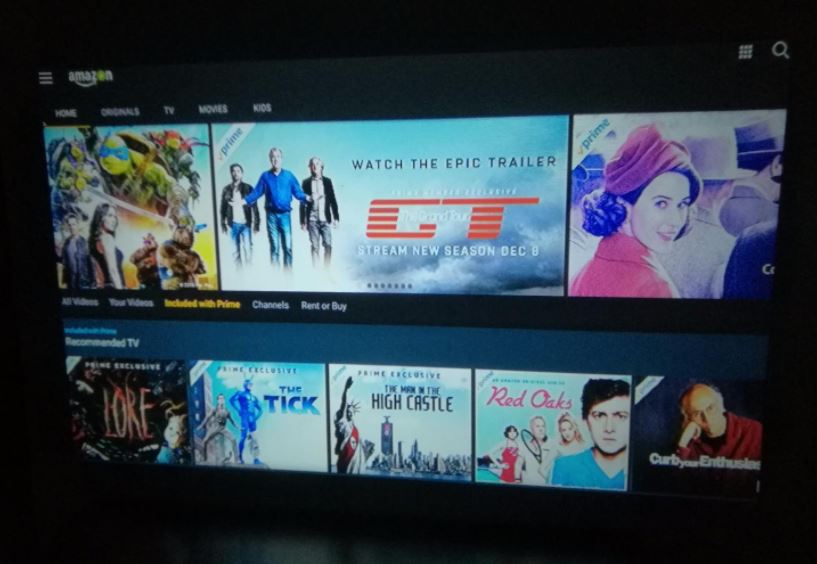 In our experience, 480p video can be palatable for watching a movie assuming it’s one that doesn’t lean too heavily on cinematic beauty. Any content that deserves visual appreciation or requires you to notice finer details presents a significant problem. For example, we were able to connect a smartphone via MHL-supported USB connection. Watching video was acceptable, but reading text on webpages or emails was extremely challenging. Playing certain video games, like a car racing game for example, might work since you’re focused on the entire screen as a whole. A shooting game that requires specific focus and precision aiming would prove very challenging on such a low-resolution image.

GooDee’s ultra-budget, ultra-portable YG500 Projector may not have top quality specifications. It isn’t going to convince you to stay home from the movie theater and turn your living room into a screening room. We also have concerns about long-term durability and support given that GooDee has no web presence and the YG500 is white-labelled from an unknown manufacturer. 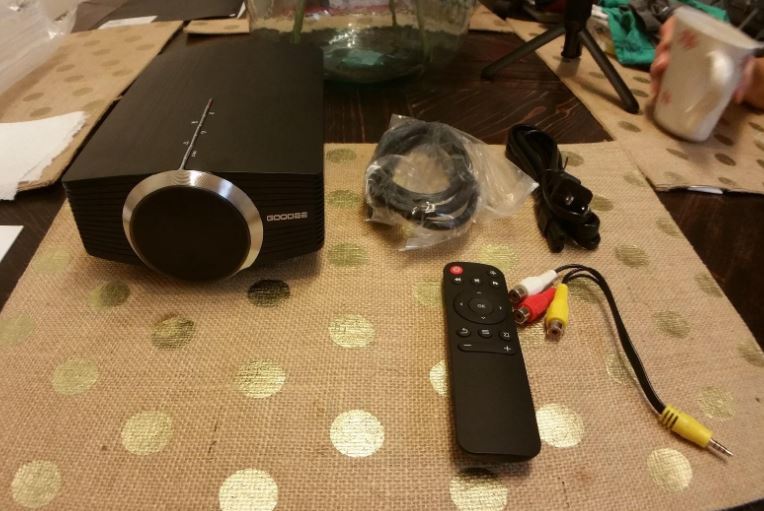 That said, it is a great way to get a projector at an unbelievably low price. Though 480p video isn’t ideal, you’d have to pay significantly more to get a projector with even a 720p resolution, let along Full HD or 4k. We’re used to judging electronics on features and quality, but you can’t make a fair assessment without factoring in price.

Perhaps you want to watch a movie outside at night or while camping. Maybe you want to binge watch a show from bed on a bigger screen than your tablet or smartphone. While the resolution and quality sit very far from award-winning top tier products, the flexibility of the YG500 means it might do exactly what you need it to do at a much lower cost than more premium projectors.

The rapidly changing electronics market fuels a constant drive for bigger, better, and faster products. Sometimes it’s important to remember that “good enough” can serve both your needs and your budget. As long as you can accept the lower resolution, the GooDee YG500 Mini Portable Projector delivers the fun of a big screen at a fraction of the price.