At one time, a Hi-Fi stereo was the best way to enjoy our music. When Sony released the Walkman, we gained the ability to take our favorite albums with us wherever we went. Soon, MP3 players made our entire music library available at the touch of a button. Finally, Bluetooth speakers made Hi-Fi technology portable.

But the innovation didn’t stop there. To remain competitive, manufacturers continually improved their speakers with every generation. They became louder, clearer, and more durable. Today, we’ve got speakers that are small enough to fit into your pocket. They’ll work in all kinds of extreme environments, including under water or up at the ski hill. No matter what you want your speaker to do, you can bet that there is one model on the market that can meet all of your needs.

What do you do when you find something that meets all of your criteria? You look for a deal. The Gracety Ultra-Portable Wireless Bluetooth Speaker has all the features of a high end outdoor speaker. The only thing low-end about it is the price. For anyone looking to save a few dollars, this speaker looks pretty attractive. But when you’re comparing it against models several times it’s price, you’ve got to wonder what the catch is. To find out, we decided to try it out for ourselves. 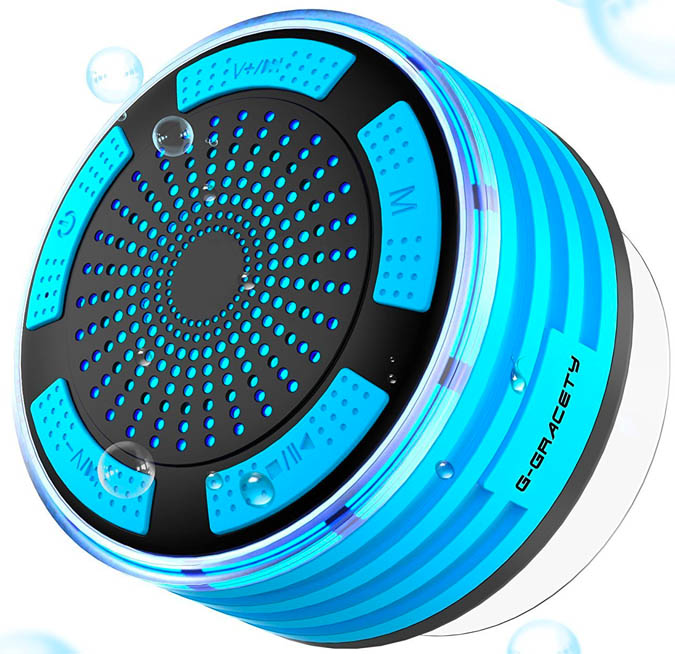 Despite only being 3.8 inches in diameter, this tiny cylindrical speaker has a design that will capture your attention from anywhere in the room. It’s compact enough that you can throw it in your pocket, but loud enough that it can be used to keep a large group entertained. While there are many waterproof speakers on the market, this one has earned an IPX67 rating – the highest rating that can be assigned. If it wasn’t unique enough already, the manufacturer even included an FM radio. The low price definitely caught our attention, but it was the impressive list of features that helped set it apart from the competition. 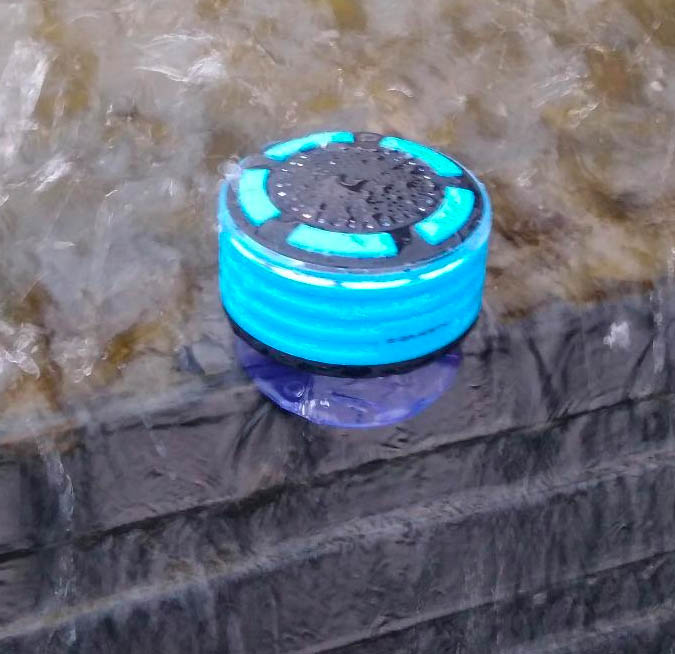 The form factor of this speaker is similar to that of an Amazon Echo Dot. But the enclosure us unlike any speaker we’ve used.

It’s made up of two plastic discs joined by an accordion-like silicone. The top cap acts primarily as a speaker grill, with five rectangular buttons surrounding it. The base features a suction cup to keep it securely in place.

There are five color choices available, each of which comes with matched LED backlighting. These LEDs are mounted behind the rubbery sides, casting a subtle glow. When in use, these lights will pulse and breathe with the music – an effect that looks especially cool under water. While the design is definitely eye-catching, most of these elements serve a purpose. 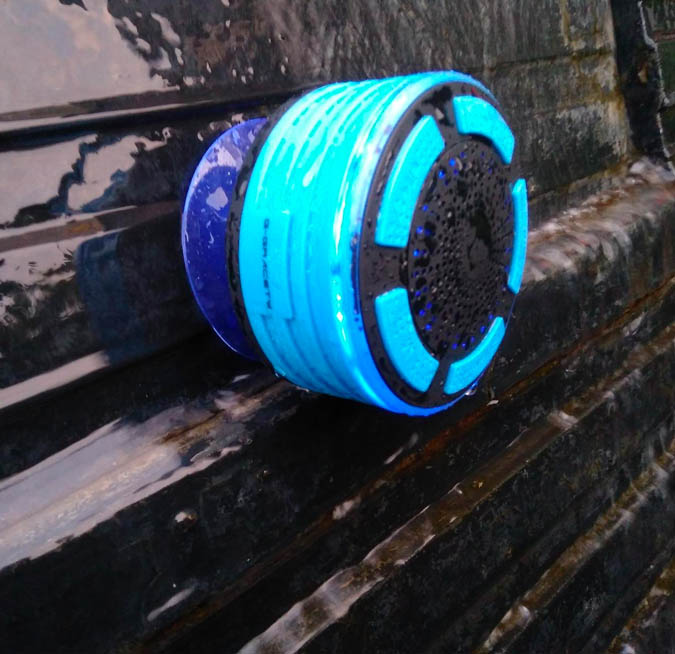 Gracety draws a lot of attention to the fact that this speaker is waterproof. In every image it’s coated with water droplets, and several photos show it fully submerged. This isn’t just hype, they’ve earned this designation with it’s IPX67 rating. 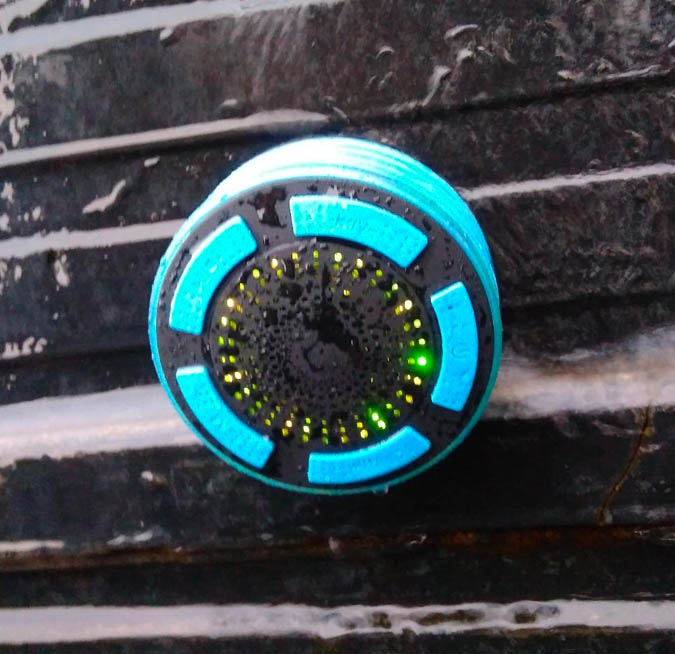 Usually, IPX ratings show you the maximum water exposure before damage can occur. If it was IPX56 rated, you’d know that it failed to last 30 minutes. But this is one of the rare cases where the rating is actually conservative. We left it under water for four hours and it’s still working fine.

All of this is impressive, but there is another reason why this speaker stands out: it floats. It doesn’t matter what the IPX rating is when your speakers sitting at the bottom of the lake. But thanks to the rubbery sides and airtight design, you can throw this on the pool and let it bob around while you swim a few laps. We’ve recommended speakers for use near water before, but we’ve never tried one that can be used in the water. 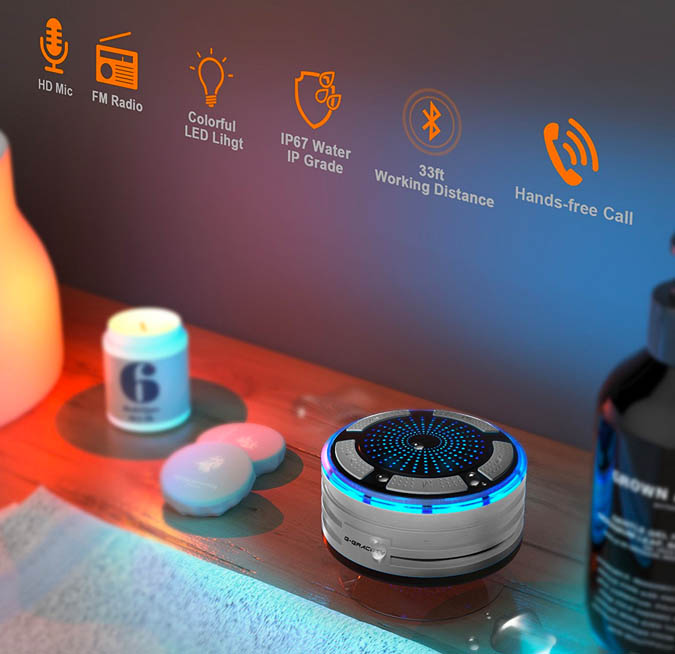 Thanks to the incredibly low weight of this speaker, it’s fairly unlikely that you’ll damage it. Even if it falls from a large height, the force of the impact can be diffused by the spring-like nature of the silicone sides.

The silicone is also useful in dusty environments. With a rubbery cap slipping into the port, sandy beaches and dirt roads won’t cause trouble when you’re trying to charge it later.

Where environmental factors are concerned, it’s unlikely that accidental damage will occur. However, this doesn’t mean that it’s bulletproof. Most of the protection comes from the low weight of materials used. This results in a fairly low structural integrity. If you stepped on it or applied a lot of force, we could easily see the plastic enclosure cracking. At this point, a broken seal would mean that it’s no longer water proof. 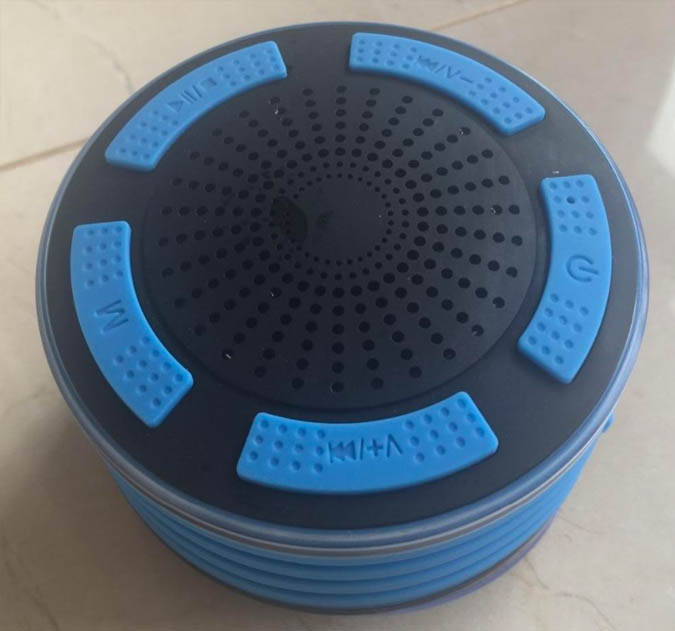 Although we were impressed with how loud this speaker could go, you shouldn’t expect miracles in terms of fidelity. Music was fairly flat and lacking in energy, but it did have a bit more kick than we expected. If you crank it up all the way, you’ll hear some distortion in the lower frequencies.

While it didn’t blow our mind, it wasn’t any less impressive than similarly priced speakers. And as long as you’re not planning any critical listening, there are two key areas where it excels. For talk radio, the volume meant that it was clear and easy to hear. Additionally, it can be used under water. If you stick it under the water in your pool or bathtub, you’ll hear the music whenever your head is submerged. While this was more of a novelty than anything, it’s not a feature we’ve seen elsewhere. 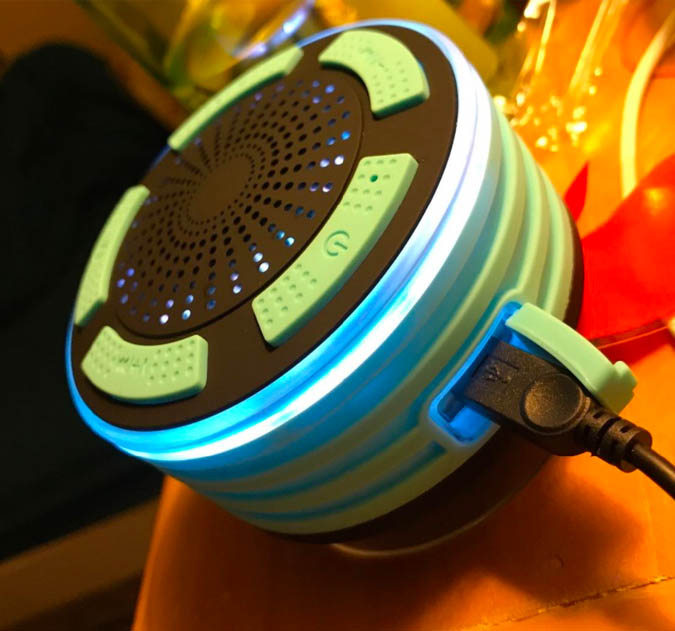 Although this speaker uses the older Bluetooth 4.0 standard, it still has a few modern features. The buttons can be used to change tracks and pause the music through your media player of choice, and the built in microphone will allow you take calls. Although you’re missing out on the ability to use Siri through the microphone, we’d consider this feature list to be pretty impressive for the price.

The one feature that stood out the most was the FM radio. When you’ve got a Spotify subscription, the desire to tune into your local radio might not be there. But this speaker excels for voice content, making this a great way to catch up on the local news.

This isn’t just a basic radio, either. It’s got all the features as the radio in your car. You can automatically scan through stations, locking into the next one within seconds. You can save your favorite stations to memory, saving you the trouble of skipping station to station. Reception was excellent – rarely did we find a station that was too distorted to understand.

The battery didn’t last as long as we’d expected. Even when fully charged, it only takes 4 hours before you’re at 30%. Normally we’d just continue using it until it was totally dead, but the speaker constantly cuts out so a robotic voice can announce “Battery low, please charge.” This makes the speaker virtually unusable at this point, so you can’t expect a lot of playtime from it. 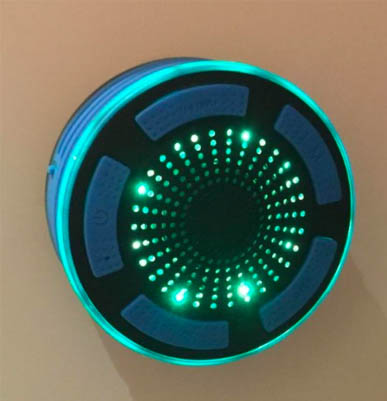 The least we can say about the Gracety Portable Bluetooth Speaker is that it’s intriguing. It’s priced like a novelty, but offers a lot more than you’d expect. If you want a way to listen to the radio in the shower or take hands-free calls in your car, this is a very realistic solution. Voice quality is high, and the features are on par with higher end models.

Although you aren’t going to be doing any critical listening on this speaker, it’s still pretty fun to have around. Whether we’re listening to music in the shower or splashing around in the pool, this is the speaker you’ll want to use when you’re concerned about damaging a pricier model.

At this price point, it’s not going to break the bank if you damage it. From a durability perspective, you’ll likely get a lot more use out of this model than you would any other competitively priced model. In our eyes, this provides a lot of value in an market where expectations are typically low.