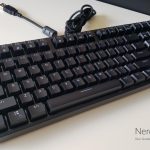 Every computer comes with a keyboard these days, but most of the included boards are pretty low quality and will fall apart after even a little heavy use. The keyboards that come with computers are very durable and feature keys and switches that mostly used plastic designs for input recognition. Not only is this not very satisfying in a tactile sense, but it can provide real disadvantages if you’re a serious PC gamer or if you just want something comfortable for writing your blog posts.

That’s why mechanical keyboards are the way to go. These keyboards not only provide an extremely satisfying user experience in terms of feel and sound, but they’re built with excellent sensitivity and functionality. Their switches are designed to register inputs much more accurately and quickly than typical cheap boards. Some of the best mechanical keyboards can let gamers input lots of keys at once.

So how does the Hexgears K520 Professional Mechanical Keyboard compare to other mechanical keyboards on the market? That’s what we intended to find out. In our review, we’ll explore all that this keyboard has to offer and show you what, if any, downsides it has. By the end, you’ll know if it’s a great choice for your gaming set up or desktop. Let’s get started! 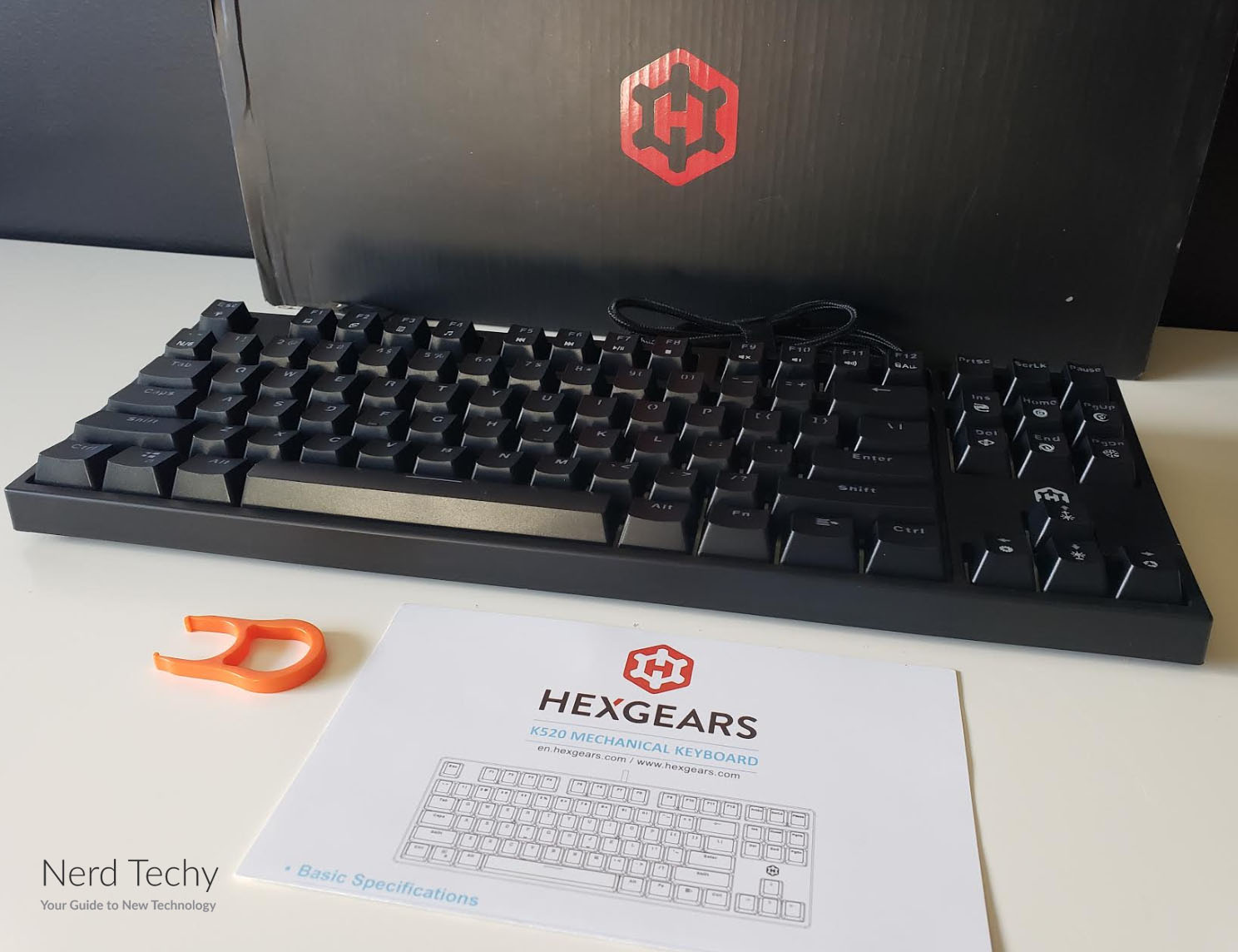 The Hexgears K520 is a fairly beefy keyboard, but it isn’t too large for most desktop setups. It measures 14” x 5.4” and is 1.5 inches thick, with an additional 6° incline available if you engage the back feet. This is perfect for providing excellent ergonomic comfort for regular typing, especially if you learn the proper method in school. These feet aren’t super durable, however, so be careful when flipping them out. If the keyboard is ever dropped, those feet are likely to be one of the first pieces to go.

In terms of longevity, the K520 has up to 80 million keystrokes reserved in its durability and excellent construction methods. It’s a phenomenal long-term keyboard solution, especially as a Brown Switch model. 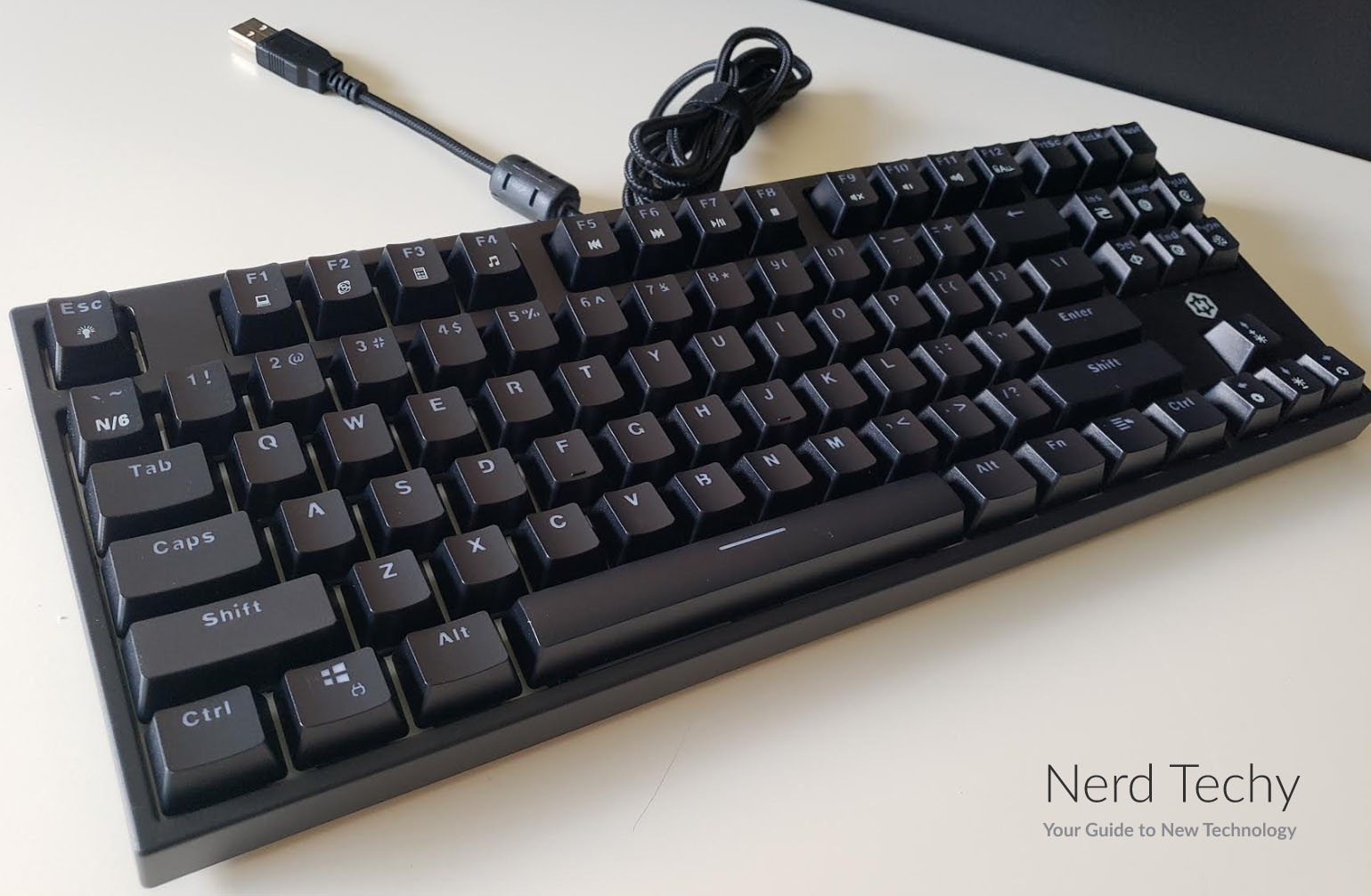 But there’s more. The K520’s keys are designed to be “floating” such that they are easy to remove so you can clean the interior of the keyboard with compressed air or small scrubbers. Many mechanical keyboards are difficult to clean because of their key designs, but not this one. Keys reattach relatively easily as well.

The keyboard is overall fairly durable, even with the aforementioned ease of removing individual keys. Actually, having keys that are easy to remove is often better when it comes to keyboard lifespan than keys that remain on the board. If you ever dropped the keyboard and individual switches fall out, you can simply replace them, whereas if they remained attached to the board that might’ve suffered extra damage or cracked.

The board is also IPX56 rated waterproof, meaning that it’ll handle most common moisture issues like spilled drinks over its surface. It won’t last long if you dunk it into a sink, of course, but that’s extremely unlikely. For all common waterproof concerns, the K520 has you just as well covered as other waterproof keyboards on the market. 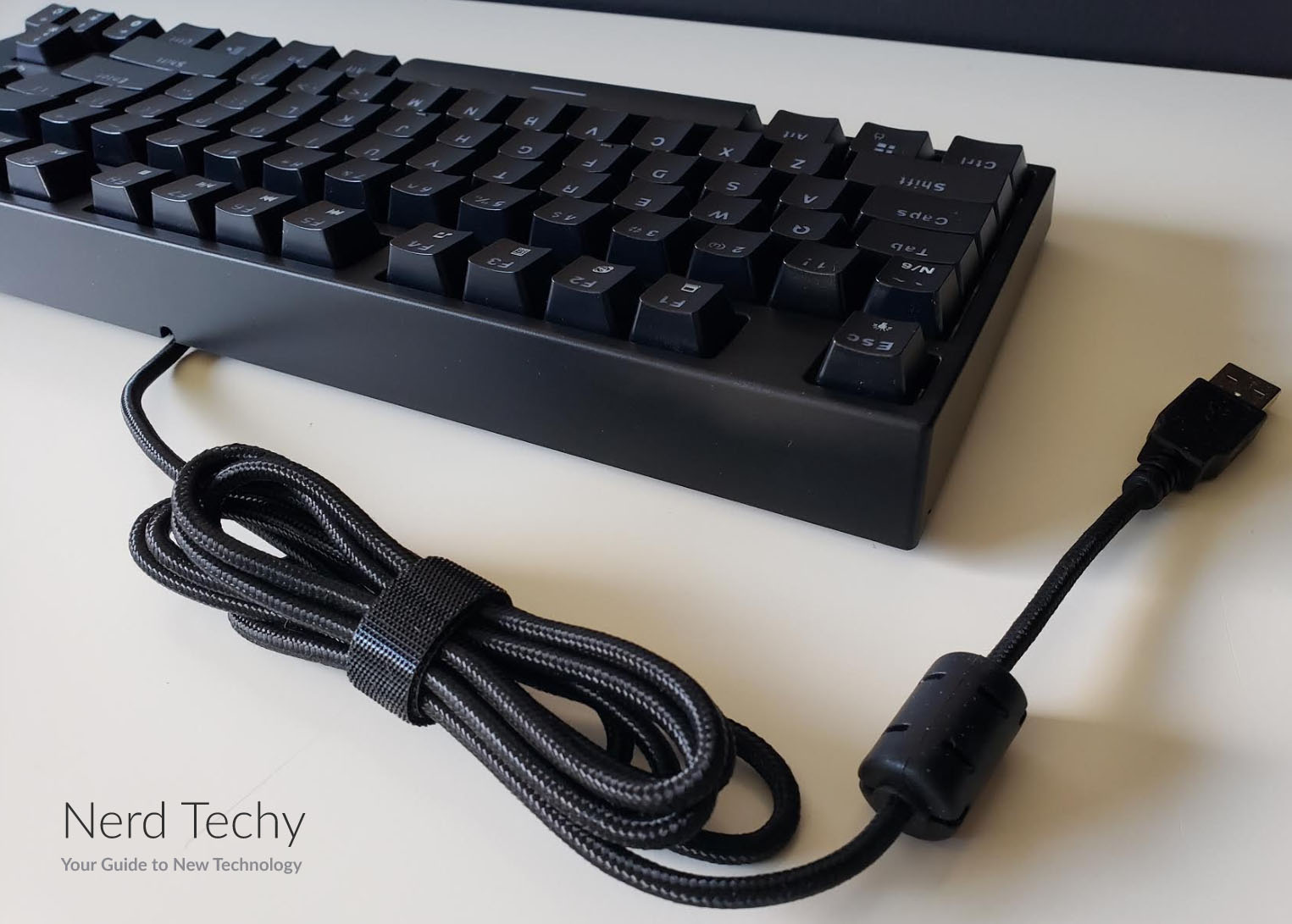 The K520 is made with universal compatibility in mind. Its software will automatically integrate and install with computers that modern Android, Windows, Linux, and Mac OS operating systems without any extra work on your part. Simply plug in the keyboard and it should automatically begin the driver and software updates and installation processes.

Put simply, Brown Switch mechanical keyboards are devices that require 45 g of force to activate each switch. Each switch input will feel tactile and responsive: both elements that should interest any writer or gamer that spends lots of time at the keyboard. Any mechanical keyboards like this are extremely responsive and comfortable, but those with Brown Switches have additional benefits. 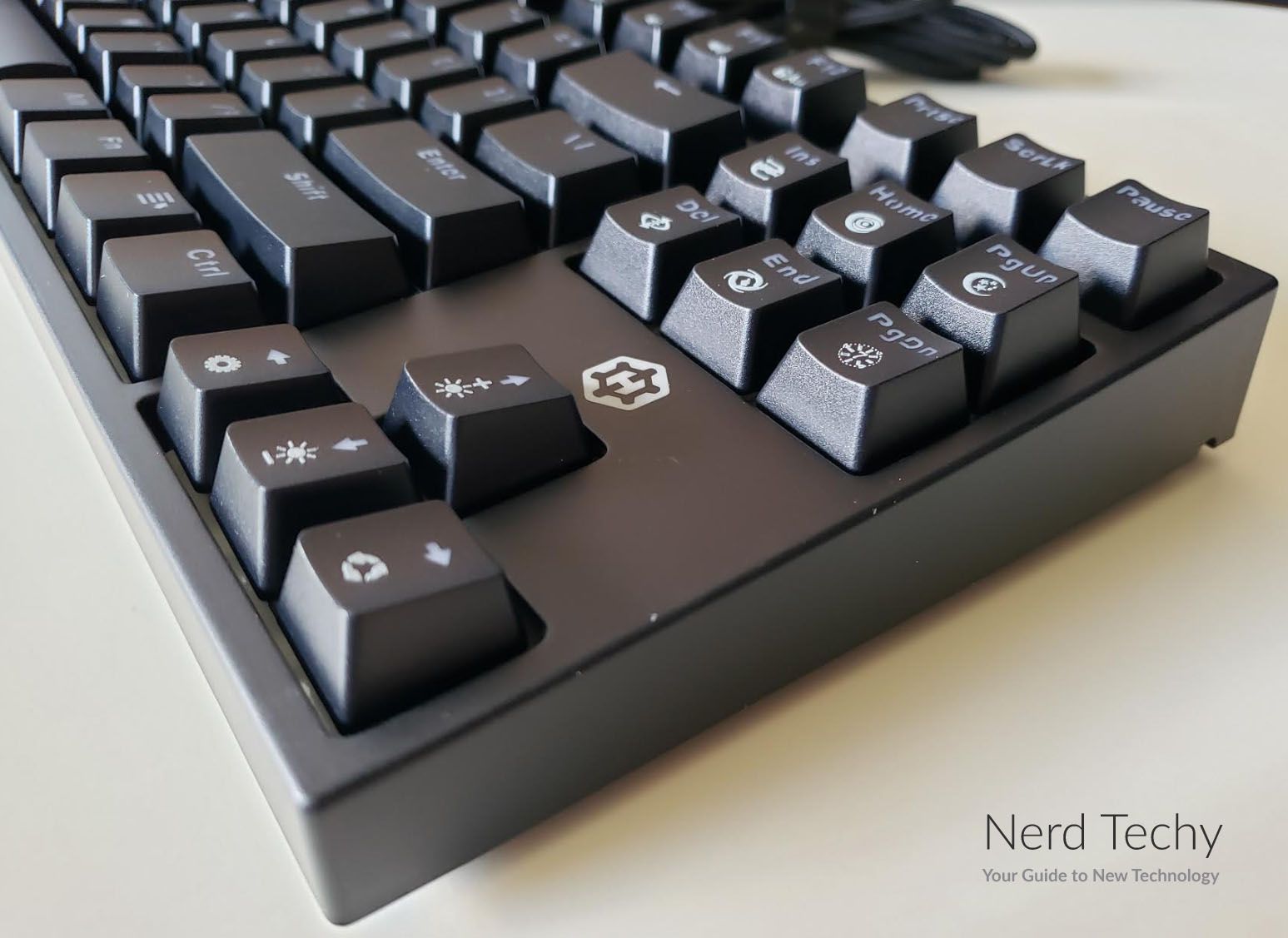 Cherry MX Brown Switches (their full name) don’t make tons of sound the way you normally expect from mechanical keyboards. Despite this, they spring back super quickly after each actuation, allowing you to make rapid inputs one after the other without compromising accuracy or comfort. For this reason, the switches are a popular choice for gamers that may require multiple repeated inputs for certain movements or abilities.

They’re popular among bloggers and developers as well. The low actuation force requirements mean that your fingers have to expend less energy for each input compared to many other mechanical switch types. The low sound is also helpful if you have a roommate or do most of your keyboard work around others; odds are they won’t be as annoyed by the rapid-fire clicking than they otherwise would be. 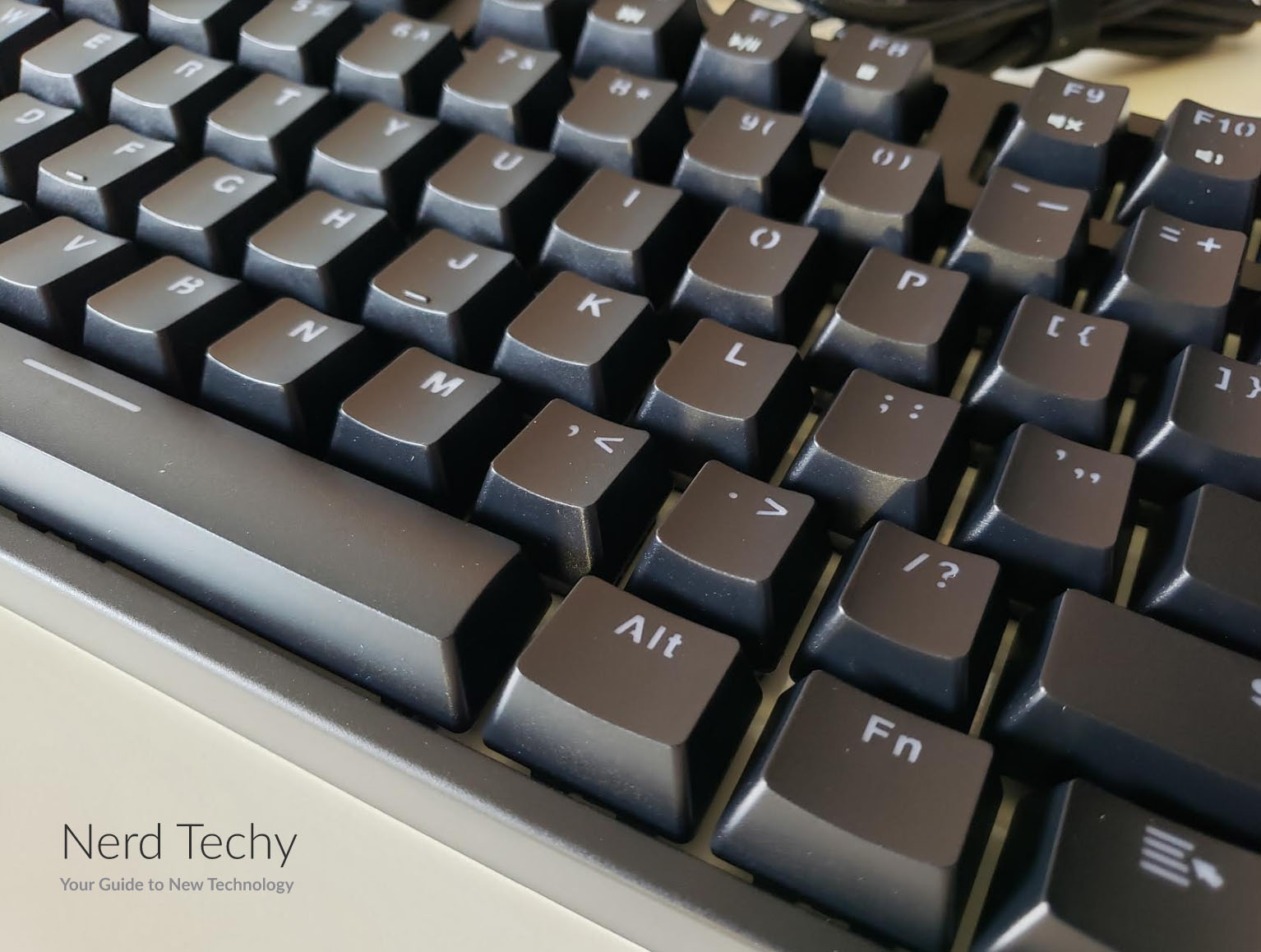 This keyboard’s switches are bolstered by 18 K electroplated designs. Basically, each switch is boosted by a plating of gold that ensures proper durability and electrical transmission for each stroke. It’s another way to boost overall key input accuracy, and we found that it ensured a reliable and consistent performance each time.

While the default keyboard choice is equipped with Brown switches, you can also choose the exact same keyboard with Red switches instead. Cherry Red switches also require 45 g of force properly actuate, although many believe them to require a slightly lighter touch to allow for faster input maximum.

They also tend to be even quieter than Brown switches, making them further popular for those roommates. Gamers are usually partial to these types of switches because of all their benefits. Between the two, it’s most accurate to say that Red switches are slightly lighter and faster while Brown switches are a little more tactile and satisfying. The difference is ultimately up to you, as both types can be purchased the same asking price. 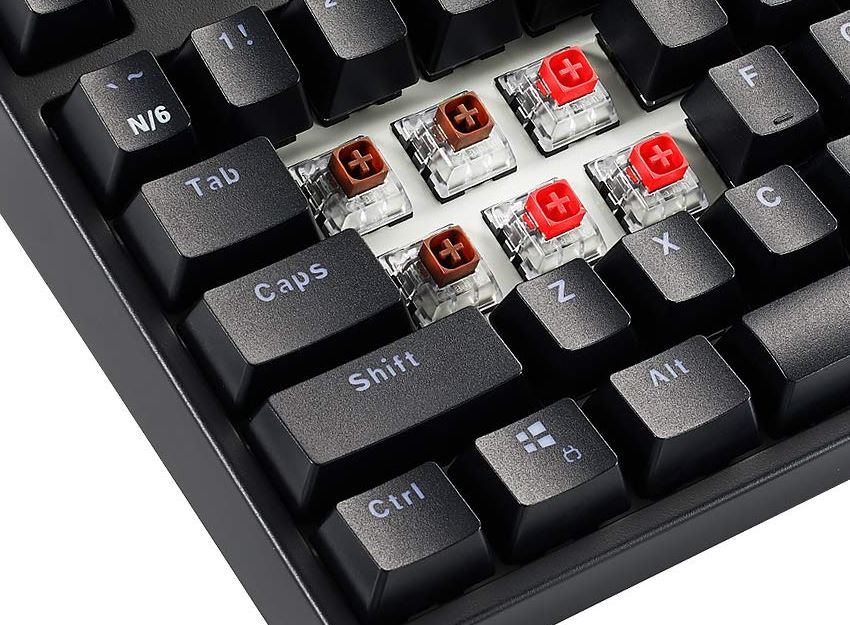 The K520 has another element that will make it popular among serious keyboarders. Anti-ghosting tech is included in its design. Put simply, many cheaper keyboards experience a phenomenon that causes other keystrokes to fail after pressing more than six keys at a single time. Basically, cheaper keyboards can’t register more than six simultaneous inputs because of software or hardware limitations.

Anti-ghosting keyboards like this one, therefore, address this phenomenon fully. Although the times in which you would do this are likely rare, you could theoretically press all keys or commands at the same time and the board would recognize every input. The resulting Word doc would be a mess, of course.

But this feature is valuable primarily among gamers that may need to press multiple keys simultaneously or practically simultaneously in the heat of a competitive match. This is especially true since many games require multiple key presses of the same time for specific commands. Serious or fast-paced games can become hectic for keyboards, so boards with anti-ghosting tech are really the only way to go.

The K520 is even better when it comes to handling because of its responsive secondary key triggers. In a nutshell, these secondary triggers ensure that each input is accurately translated across the keyboard to your computer. Even slight misfires or partial keystrokes should end up being recognized by the board, allowing for really fast typing speeds or even better gaming accuracy as your fingers dance over the keys. 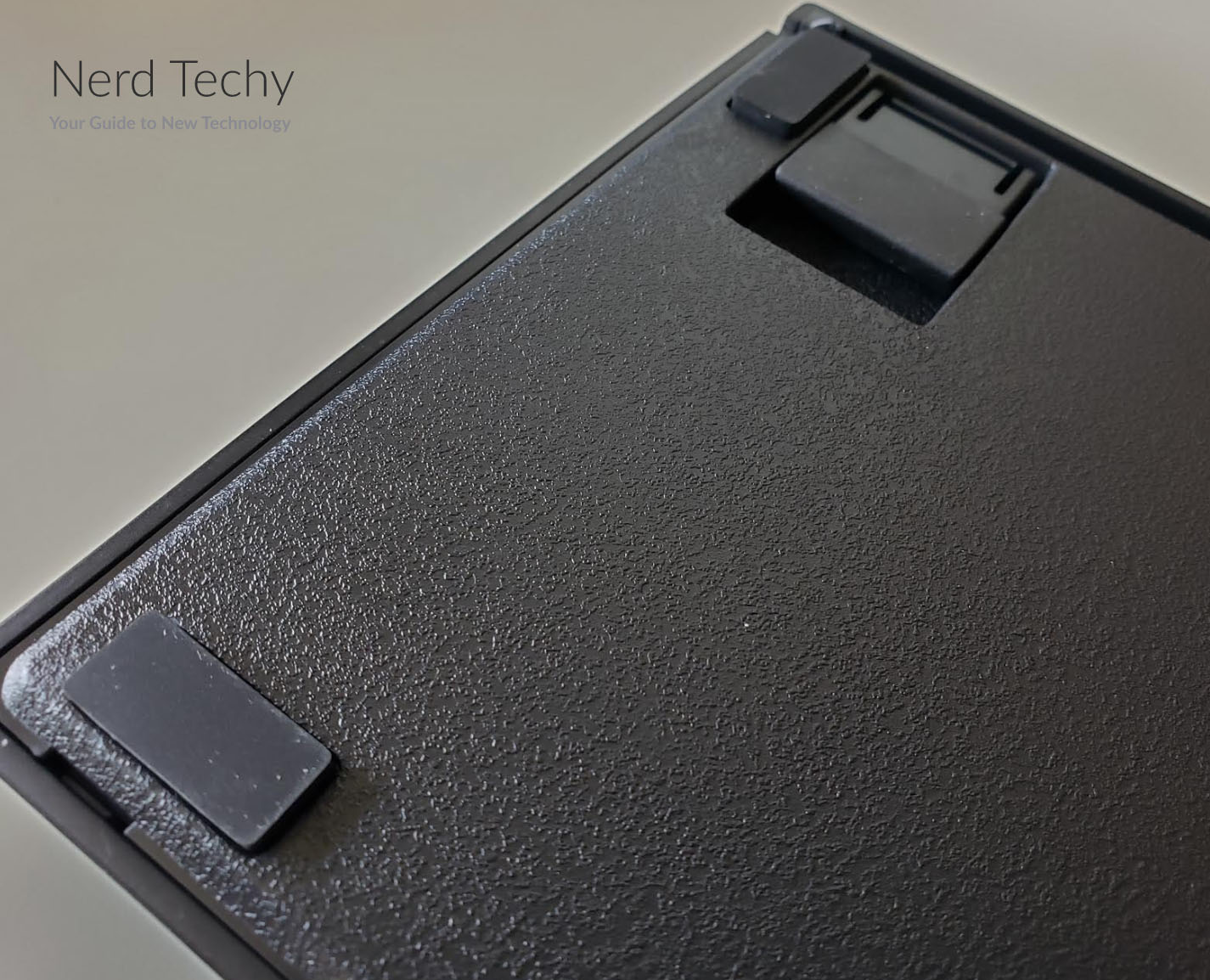 To make things better, the K520’s keys are equipped with white lights. These can be customized between different levels of brightness or turned on entirely. But they do serve a great purpose if you are ever typing in a low light environment and want extra visual accuracy. Since this keyboard is plugged in, you don’t need to worry about battery life or longevity. 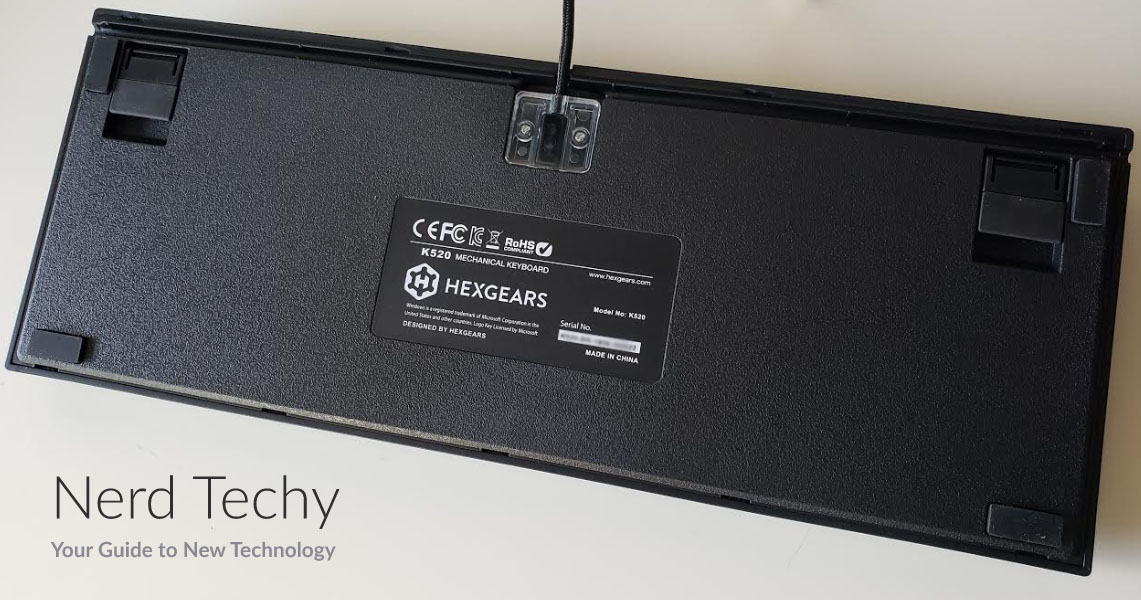 The letters themselves are startlingly radiant, each having been laser-carved so that the backlight shines through all the more vibrantly. It really does look impressive, particularly in a dark environment.

Overall, the Hexgears K520 Professional Mechanical Keyboard is a solid piece of hardware that offers great performance and good durability. It’s sturdy enough that you should be able to use it heavily for many years to come without experiencing any decreases in quality or key input time, especially since inputs are backed up by secondary triggers and anti-ghosting technology. 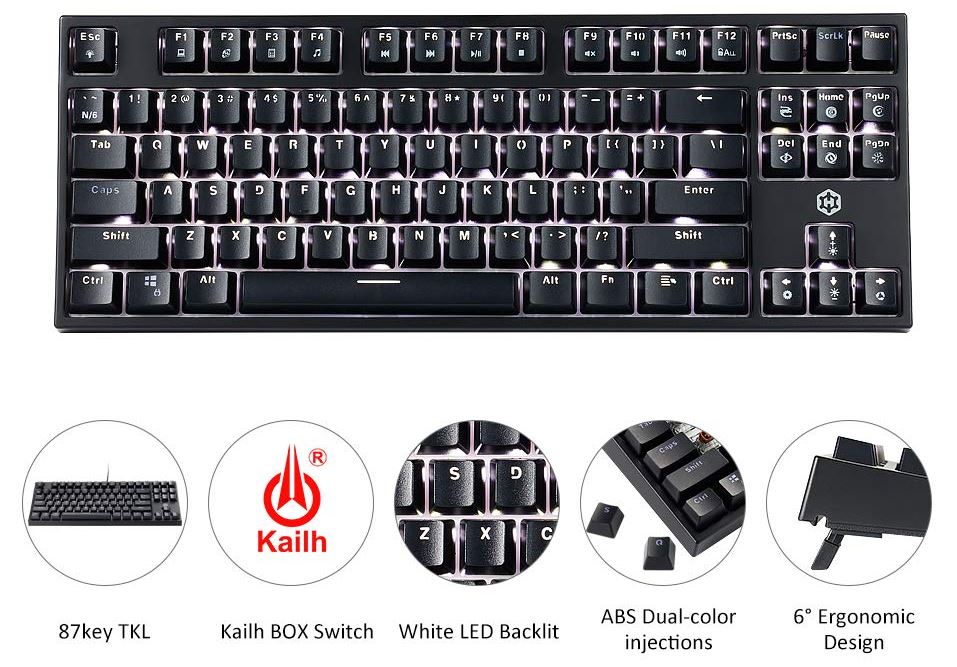 It’s also excellent because the keys are designed to fall out in the event you do drop the board. Chances are it’ll be easy to clean and maintain over the years to come. While dedicated gamers might want something with Cherry Red switches (for the quieter sound and slightly lighter bounce back), anyone else will be able to appreciate this keyboard to its maximum extent.