TechGuru May 29, 2022 Appliances, Home No Comments 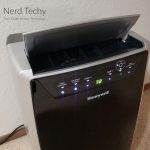 Summer is coming around sooner than you think, and you know what that means: heat. Depending on where you live that heat can be pretty substantial. Not to overstate the obvious, but you need an air conditioner. If you’ve got central air, congratulation! But if you don’t, a window air conditioner is an important investment.

Technology has come a long way in recent years. It used to be hard to find beefy, powerful window units that could properly cool a large apartment. But with the right piece of equipment, more people than ever before can use a single window A/C.

And even if you have a larger home with central air, a window air conditioner can help save money on your bills. For example, you can use a window unit in the bedroom, and shut the central air off when you go to bed. That way you’re not paying to cool the entire house when you’re only using one or two rooms.

But wouldn’t it be nice with an air conditioner could do more? What about mild and cold days? It would be nice to be able to use the same machine during all seasons. But until now, a combination of a heater and an air conditioner seemed like a wild idea. At least, it was, until Honeywell went ahead and made one.

We’re about to review the Honeywell MN4HFS9 Portable Air Conditioner. Not only does this air conditioner double as a heater, but it can also be used as a fan or a dehumidifier. And despite serving many functions, it’s relatively simple and easy to set up. There’s no reconfiguration necessary to switch between different modes.

Of course, we’ll have to look at several other factors. We’ll need to look at the control scheme, and how the machine is operated. We’ll have to discuss the cooling power, and how much square footage you can cover. After all that, we’ll have a complete enough picture to render a fair judgement. 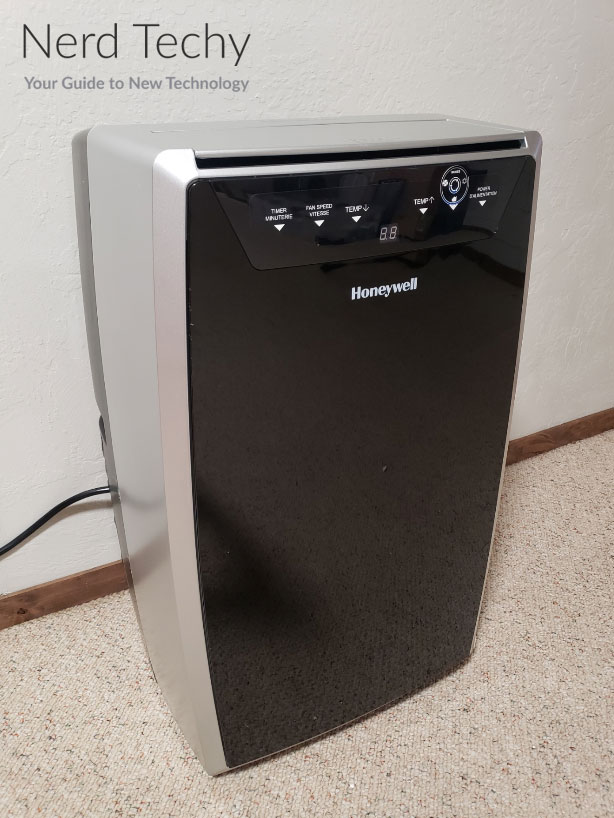 The Honeywell MN4HFS9 Portable Air Conditioner has a two-tone plastic housing. The top and sides are silver, with a satin finish that looks like powder-coated aluminum. The front and back are matte black and unassuming. It won’t dominate a room, which is a good thing, since it’s meant to sit on your floor.

The total size is 29.4 inches high, 18.1 inches wide, and 15.2 inches deep. Despite the relatively compact form factor, it weighs a touch over 70 pounds, which is fairly heavy. Then again, that’s just the nature of air conditioners in general. Besides, there’s a set of heavy-duty casters on the bottom of the housing. If you need to move it, you don’t have to carry it. You can just roll it around. 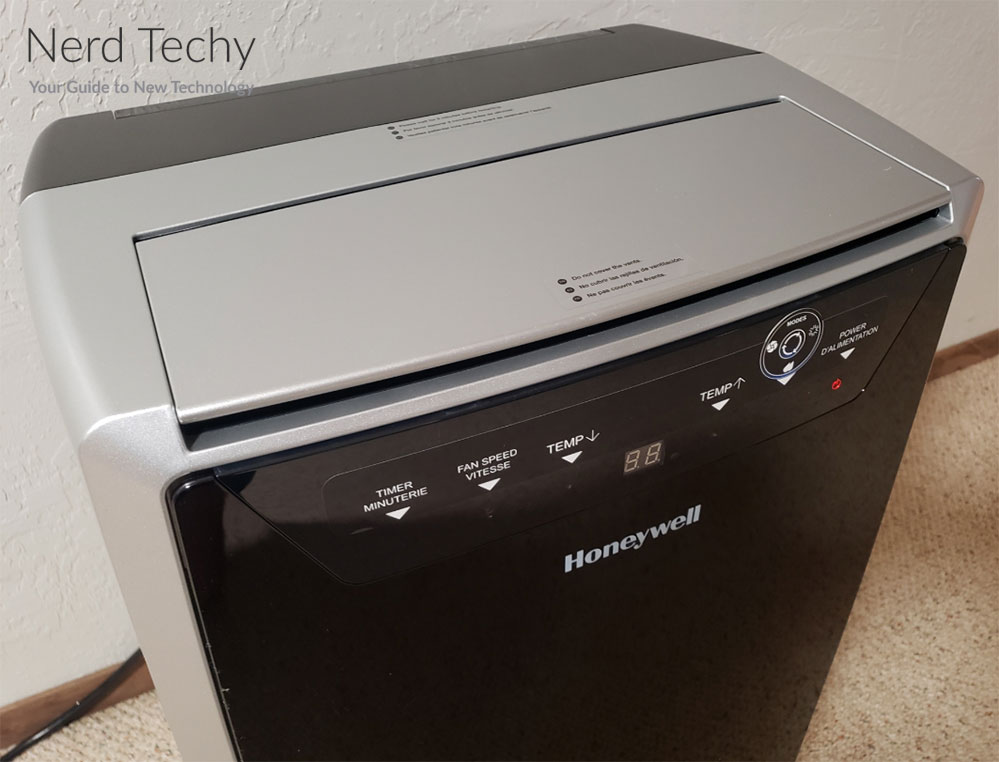 Across the top of the front, you’ll see a row of LED-lit buttons lined up in a row. The one at the left is used to set the timer function. Each tap of the button adds an additional hour. The next button is used to cycle through the different fan speeds. In the center, there’s a pair of up and down buttons, split to both sides of an LCD display. Depending on what mode you’re in, this can either display the temperature or the humidity.

To the right of the up arrow, you’ll find the mode button. This button has a set of tiny symbols around it, which light up depending on what mode you’re in. The last button on the far right is a power button, and the function should be obvious. 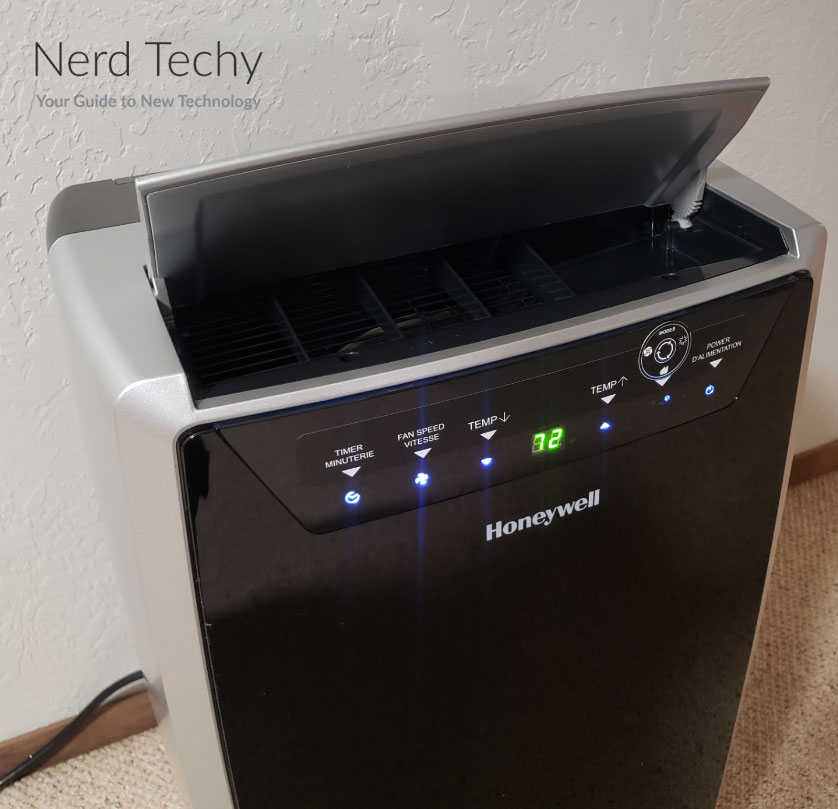 When you open the box, you’ll find a little bit more than just the air conditioner. You’ll also find a fat, collapsible vent tube, and an adapter for your window. One end of the vent tube locks into the back of the housing with a little dial. This makes it easy to connect and disconnect if you want to move it around. 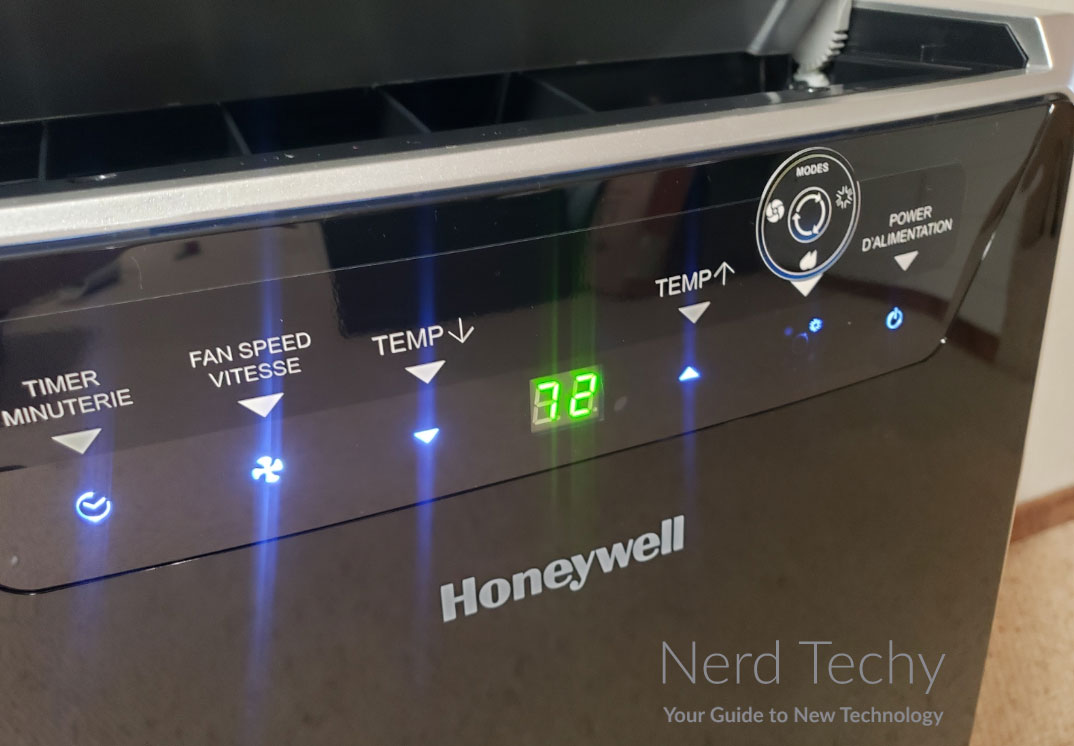 The other end of the vent tube attaches to the window adapter. This adapter has a two-part design. First, there’s the little rectangular plate the tube actually locks into. Next, there’s a longer plate that attaches onto the back. The plate has a groove in it, with a little butterfly screw that connects it to the first plate. You can loosen the screw as needed to adjust the length to almost any window. It can be installed vertically in a horizontally-sliding window, or horizontally in a double-hung window.

Once you’ve installed the vent, you’re mostly done with the installation. But before you actually turn the A/C on, make sure the unit has been upright and undisturbed for at least an hour. This allows the refrigerant to settle properly, so you don’t damage your compressor. 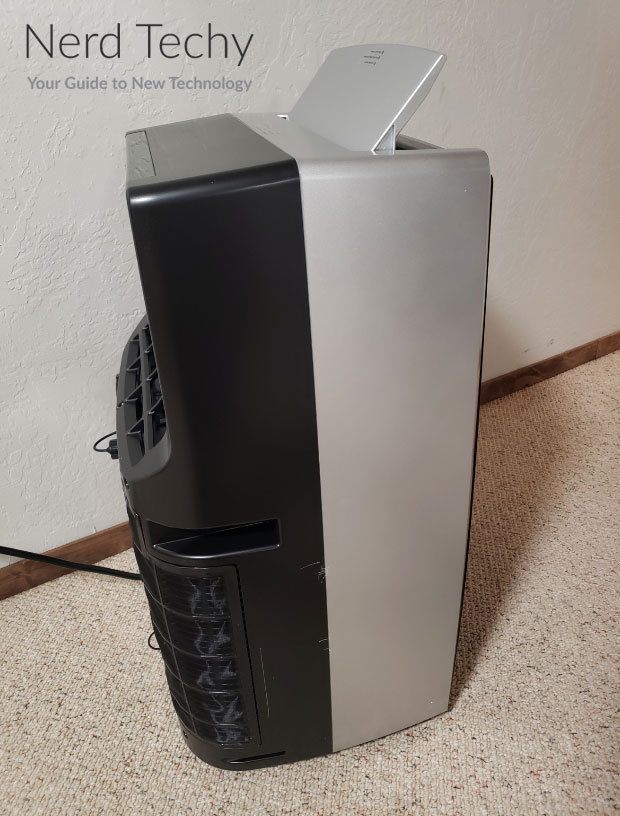 The air blows out of a vent in the top front of the housing, just above the control panel. Out of the box, this is just a narrow slit, and it blows straight forward. However, the back of the venting is hinged, and you can angle it upwards. This produces a larger vent surface area, which blows at a slight upward angle.

The only other thing to be aware of is that the internal condensation reservoir needs to be drained occasionally. This is easy to do via the drain plug at the bottom. Alternatively, you can run the included drain tube to your sink. 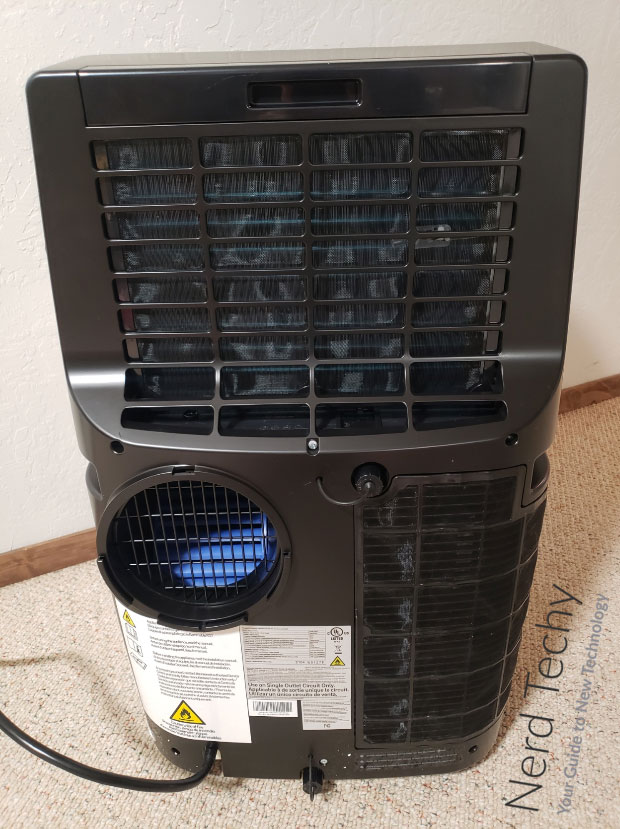 When you turn this Honeywell air conditioner on, the display will show you your current temperature. To adjust the thermostat, simply press the up or down arrow respectively. The lowest possible setting is 61 degrees Fahrenheit, and the highest is 89 degrees.

There are three different fan speed settings, which you cycle through by tapping the fan button. Normally, this distributes cold air around the room. But if you put the MNFHFS9 into fan mode, it will circulate room-temperature air, instead. 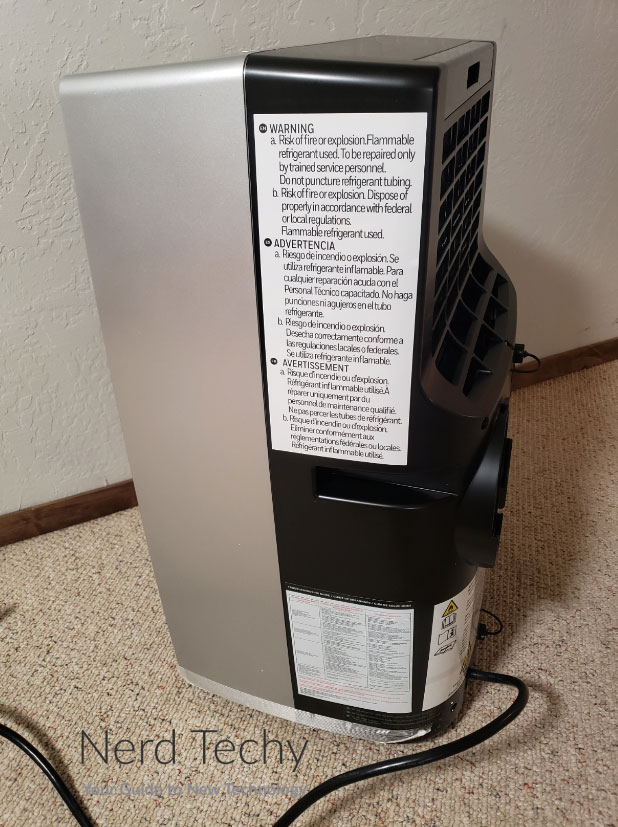 The timer can be set at intervals up to 24 hours. This is useful if you don’t want to use the A/C on a permanent basis. You can set it before you go to bed, and it will automatically shut off in the morning.

In addition to the on-board controls, you can use the wireless remote. This has all the same functions, and takes a pair of AA batteries. That way, you don’t even have to get out of your chair to adjust your settings.

If you’re looking for better energy efficiency, check out the HiFresh JDAC90R. This is an evaporative air cooler, which uses the power of evaporation to lower the air temperature. There’s no thermostat, and it doesn’t cool the air nearly as much as an ordinary A/C. On the upside, it has a very low power draw. 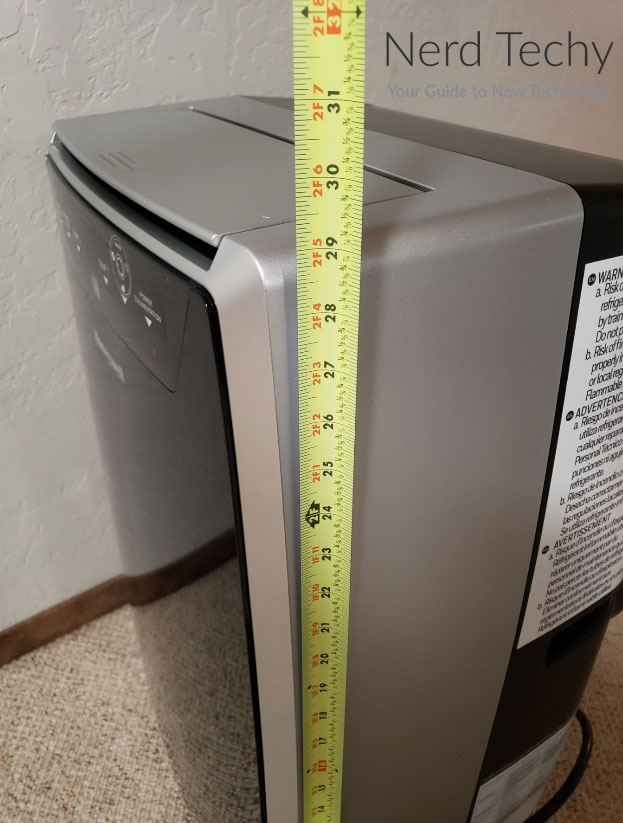 The Honeywell MN4HFS9 has 14,000 BTUs of cooling power. This is exceptionally powerful, more so than almost any other window air conditioner on the market. It’s rated to cover up to 700 square feet of floor space, which is larger than most one-bedroom apartments. Even some two-bedroom apartments fall into this size category.

Despite its powerful performance, this A/C unit produces a surprisingly small amount of noise. Even at maximum power, its volume is only 54dB. That’s about the same as everyday conversation, so you don’t have to shout to be heard over it. 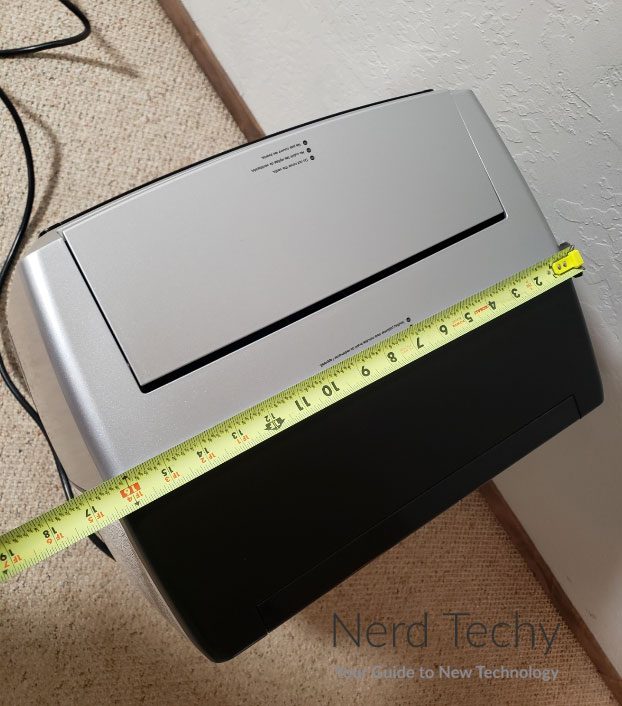 On the back side, you’ll notice a set of filters. They both cover the intakes, but because of the layout, they’re removed differently. The top one slides out from the top, and the bottom one pops out. Both are easy to wash, and dry out in just a few minutes after they’re clean.

This is a very capable air conditioner, but it’s also a bit bulky. What if you want an A/C you can take on the road? In that case, consider the Zero Breeze Mark 2. It’s a more portable air conditioner that’s designed for cars and tents, and it doubles as a charging bank. That said, it’s a lot more expensive than the Honeywell. 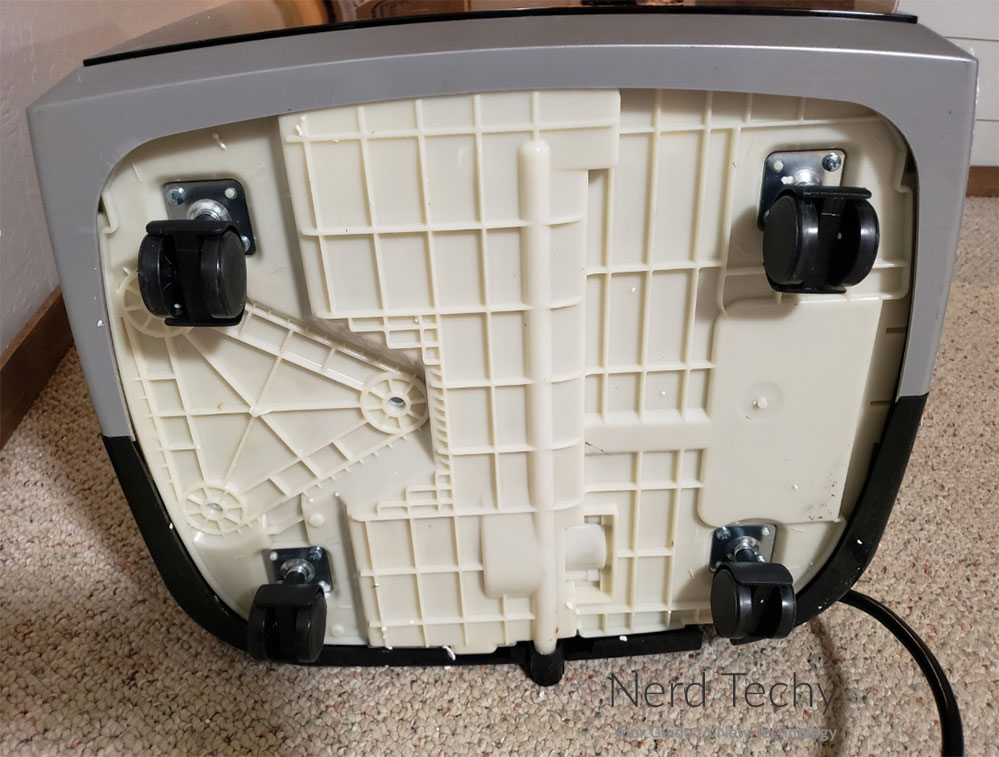 So far, we’ve been talking about the air conditioner function. But what about this machine’s other capabilities? Let’s quickly go over both.

The dehumidifier function can remove up to 51 pints of water per day from your air. That’s right in line with some of the world’s more robust dehumidifiers. That said, the internal reservoir is fairly small. Unless you want to drain it often, you’re better off connecting a standard threaded hose. This will give you continuous outflow with no need for constant emptying.

The heater function is a little bit unusual because of the way it works; there’s no actual heating element. Instead, the MN4HFS9 utilizes a heat pump that effectively reverses the air flow over the coils. Instead of cool air being vented into the house and warm air getting blown outside, it’s the other way around. 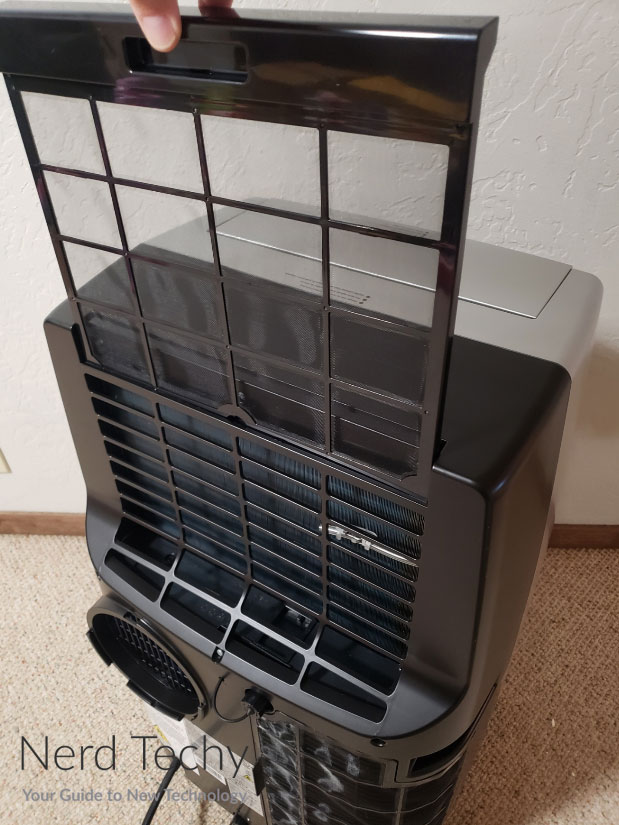 Because of the way this works, the heating function works better during milder weather (50s and 60s). It can still be used in truly cold weather, but it won’t be nearly as effective. Even so, it can add a bit of supplementary heat in one room.

This air conditioner comes with a 1-year factory warranty. However, you can add an additional 1, 2, or 3 years for an extra charge.

One thing this machine won’t do is clean your air. If that’s what you’re in the market for, take a look at the Elechomes OX300. It’s a powerful air purifier that removes even the smallest microscopic particles. 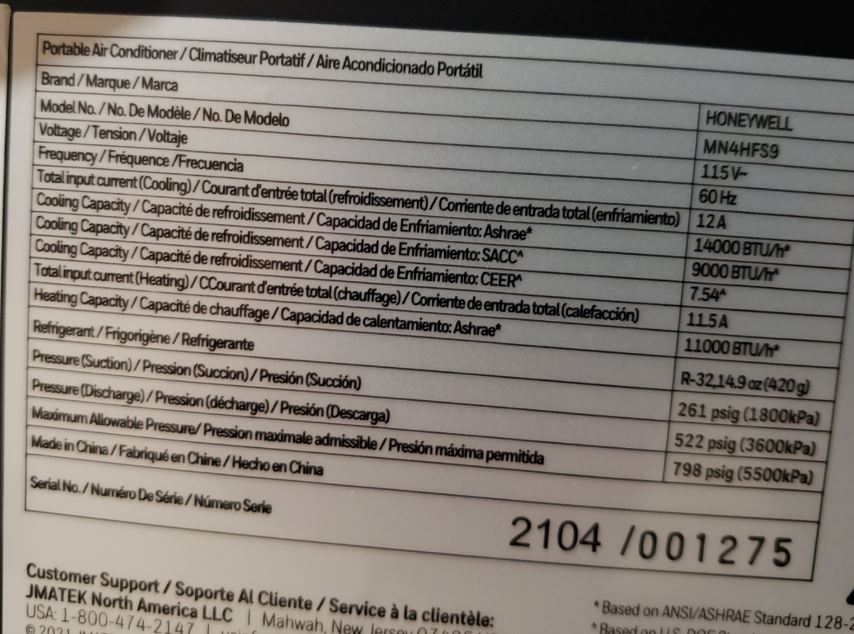 The Honeywell MN4HFS9 Portable Air Conditioner is an exceptionally versatile machine. Not only can it cool a large area, but it can heat and dehumidify as well. It’s easy to set up and easy to use, and can install in almost any window. And while it’s large, the wheeled design makes it easy enough to move around.