For fans of retro gaming, few systems scratch the same itch as the Nintendo 64. Maybe you loved to run and gun in the first great console shooter, Goldeneye. Maybe you enjoy the feeling of taking out your friend with a well-placed shell in Mario Kart. And who can forget the thrill of defeating Ganon in The Legend of Zelda: The Ocarina of Time? If you owned the original N64, thinking of those games probably brought a smile to your face.

Those were good times. But you know what wasn’t so good? Crowding around the console with your friends. Honestly, we’re not sure what Nintendo was thinking when they made the original cords so short. Over the years, manufacturers have tried to compensate with extension cables, or with aftermarket controllers that have longer cables. But a well-designed Bluetooth controller has remained elusive, at least until today.

Back in 2018, gaming hardware manufacturer Hyperkin announced the release of their Admiral Bluetooth controller. Since it uses Bluetooth, the Admiral lets you cut that cord once and for all. Hyperkin was already known for their “Captain” premium wired controller and their “Moonlight” USB N64-style controller. The Admiral’s release was originally slated for the second quarter of 2019.

However, Hyperkin seems to have run into some issues. And rather than release a half-baked product, they did something rare in the consumer electronics world. They delayed the Admiral’s release until they were sure they had a controller they could be proud of. At long last the Admiral became available to the public on December 23rd, 2019. We’ve taken a long, hard look at this controller. And now it’s time to tell you everything we’ve learned. 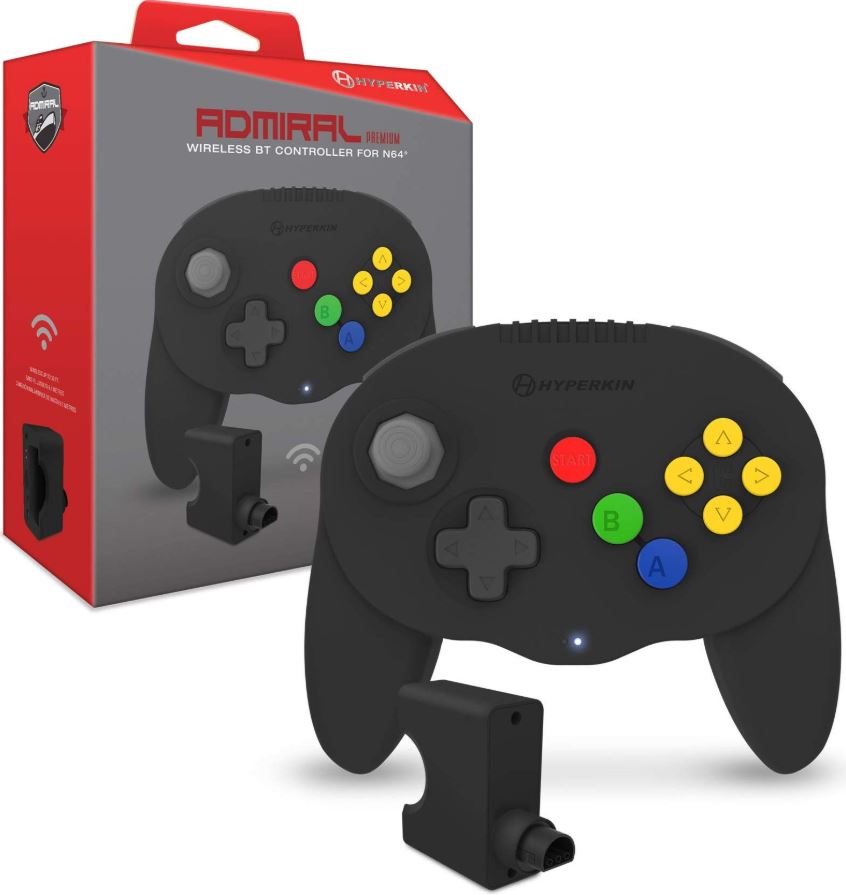 If you’re familiar with the original N64 controller, you’ll immediately notice how different the Admiral controller is. One of the main drawbacks of the N64 controller was the 3-handle design. If you’re a human being and not a 3-armed alien, you’re well-aware of how truly awkward this design was. You couldn’t get used to a consistent grip. Depending on the game, you had to hold the controller differently. Sometimes, you even had to change grips in the middle of the game.

Hyperkin has fixed that issue with a simpler, more ergonomic design. Instead of locating the Z-button on the center grip — the N64 controller’s most glaring fault — they integrated dual Z-buttons on both side grips. These buttons are similar to the R2 and L2 triggers on the PlayStation and Xbox controllers. They’re located just under the L and R triggers for ease of use. Shooting in GoldenEye and slinging turtle shells in Mario Kart has never felt so natural. The left analog stick and D-pad have also been switched, which makes the Admiral more similar to modern controllers.

In terms of design, the A, B, C, and Start buttons have a flat surface, much like the original N64 controller. However, the triggers have a concave shape, which makes them more ergonomic than older designs. The overall feel is very good, with a comfortable ABS plastic shell that left us with no complaints. The Admiral weighs 12.8 ounces, about the same as the original N64 controller. This makes it easy to switch between one and the other, once you’ve learned to appreciate the dual Z-triggers. 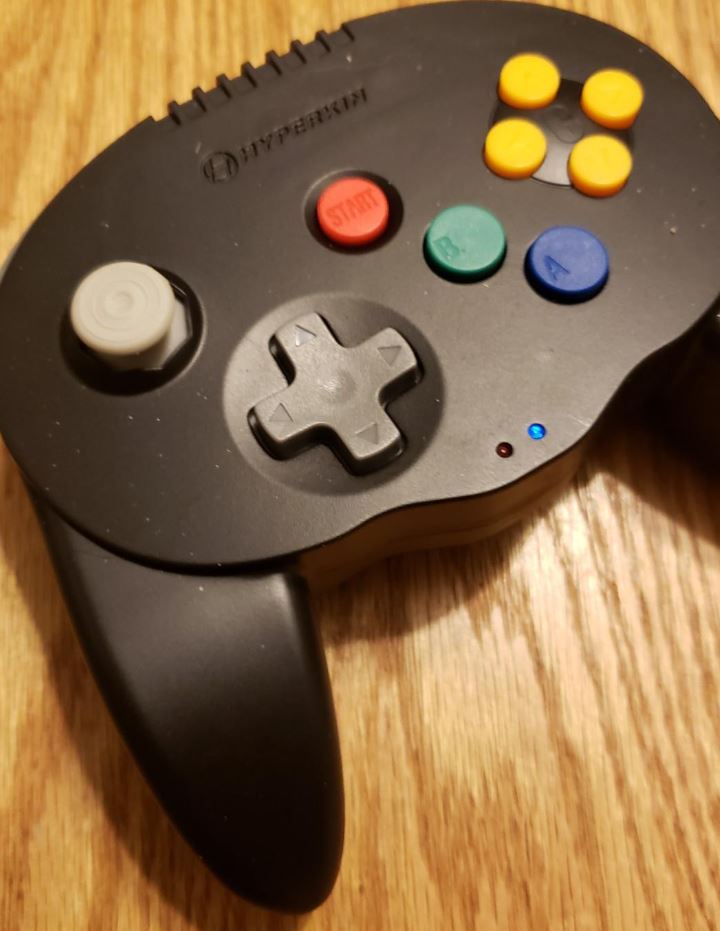 The thumbsticks are very responsive, with just the right amount of resistance. If you’re already used to the N64 controller’s thumbsticks, you’ll hardly notice a difference. You’ll have no problems with aiming, whether you’re playing GoldenEye, Mario Kart, Super Mario 64, or any other N64 game. The only major disappointment was the lack of a rumble pak. It makes sense that Hyperkin left this out to save weight. But we would have gladly put up with a few more ounces in exchange for some tactile feedback. 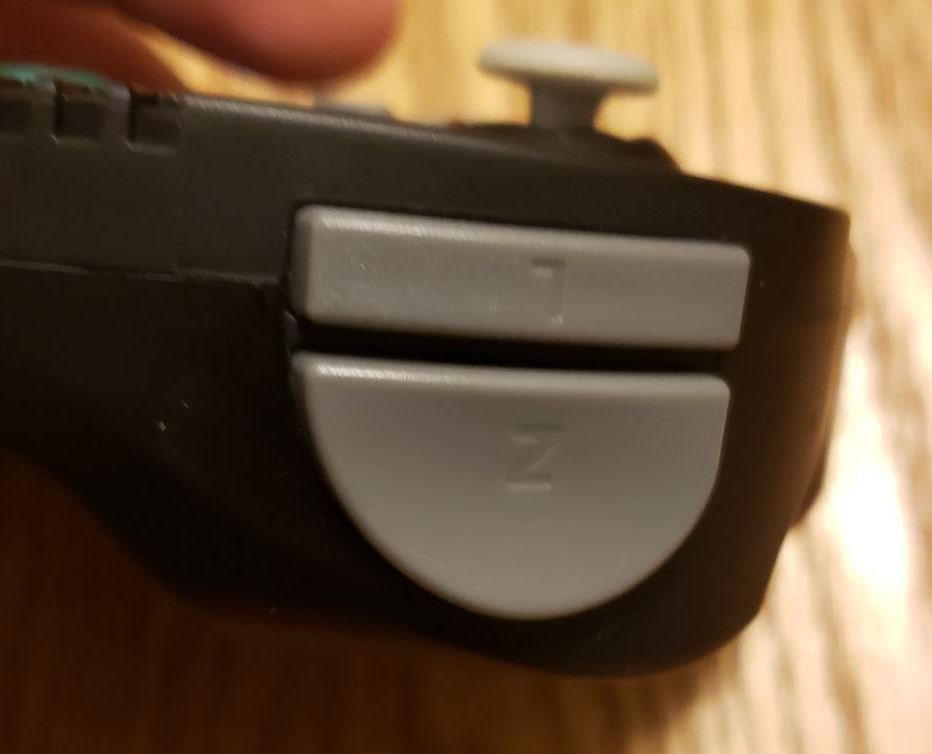 The Hyperkin Admiral utilizes the latest Bluetooth 5.0 protocol. This doesn’t have quite the range of Bluetooth 4.2, but it’s still good for 30 feet of distance. That’s more than enough for just about any living room. More importantly, the 5.0 protocol offers lower latency than earlier protocols. As a result, you’ll get a virtually lag-free connection, similar to Xbox One and Playstation 4 controllers. That’s pretty impressive when you’re working with a 23-year-old game console.

As we’ve mentioned in passing, the Hyperkin Admiral uses a built-in rechargeable lithium-ion battery. With ordinary gameplay, it lasts for six hours. However, it’s also play-and-charge compatible. There’s a Micro USB cable included with the kit. But you’ll need your own AC adapter if you want to plug the USB cable into a wall outlet. 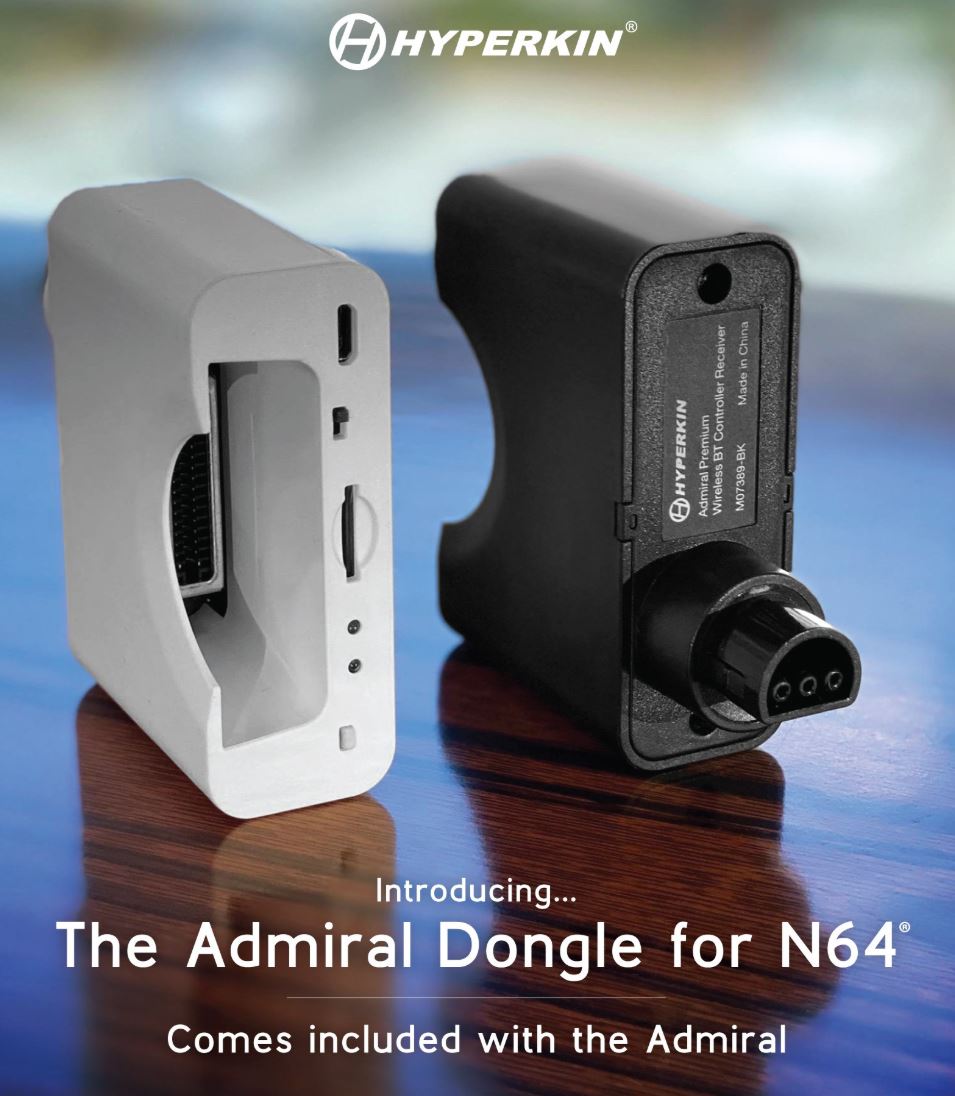 In terms of compatibility, the Admiral will work with all N64 models. If you’re playing on an emulator — or if you just like the controller layout — the Admiral has you covered. It’s capable of connecting to your PC, Mac, iOS phone, or Android device via Bluetooth. So you’re not just getting a better N64 controller; you’re getting a multi-purpose controller with N64 compatibility.

Good aftermarket controllers aren’t just the domain of the N64. There are equally good controllers for PlayStation and PC players. For example, the Astro C40 TR. It’s a powerful multi-purpose controller that offers a significant upgrade over stock PlayStation controllers.

So, what does the Admiral controller do better than other aftermarket controllers? To begin with, as you might expect, it accepts original N64 memory cards, as well as third-party replacements. So far, pretty standard, right? Yes and no. Rather than seating the memory card in the controller itself, your memory card fits into the Bluetooth dongle. This reduces weight, and not just because of the — negligible — weight of the memory card itself. It also eliminates the extra electronics and plastics that are necessary for memory card insertion. No doubt, this is a big reason why the Admiral feels so well-balanced despite the internal battery. 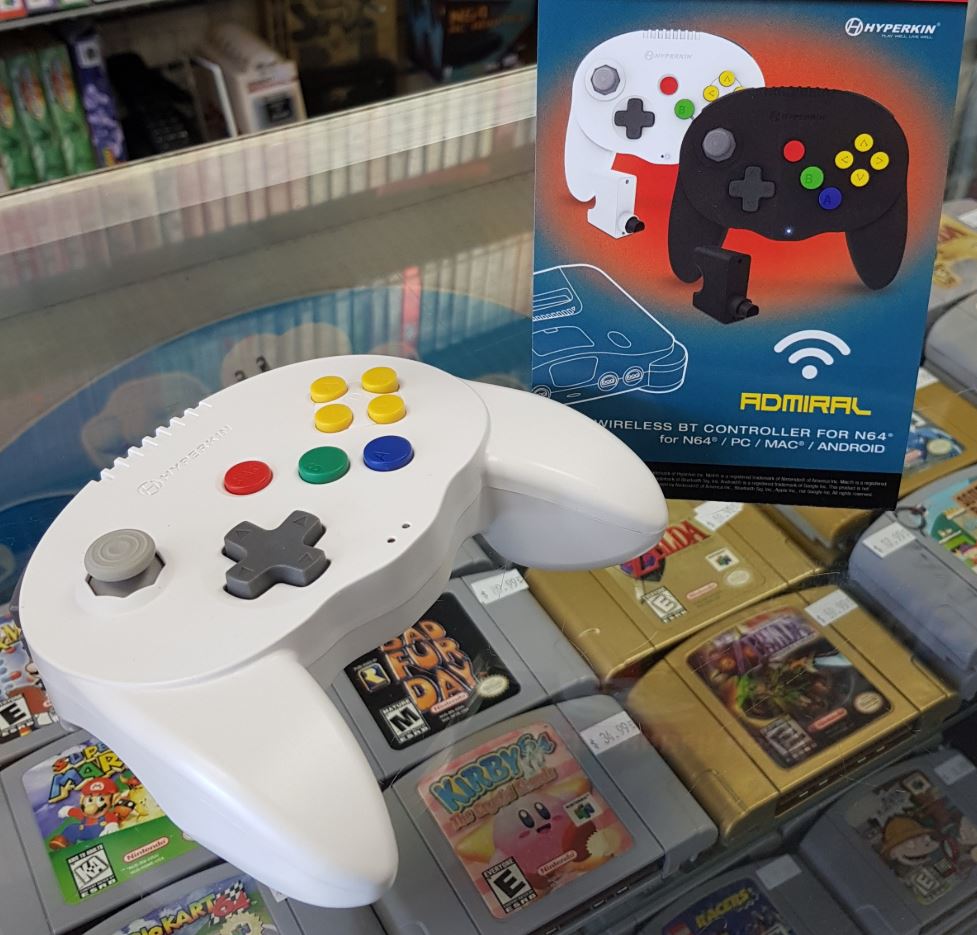 But Hyperkin has gone a step further. They’ve also built an SD card slot into the dongle. This can be used to back up your save data. Considering the advanced age of most N64 memory cards, backing up your data is just common sense. You’ll need to provide your own SD card, though; there’s none included with the kit.

One feature we’d hoped to see was support for the N64 Transfer Pak. If you’re not familiar with this device, here’s a quick overview. The N64 Transfer Pak is used to transfer data between an N64 and a Game Boy or Game Boy Color. This is a bit of a niche product. It’s only necessary for a handful of games, and the list of games is available on the Nintendo Fandom Wiki. As you can see, most games don’t require one. But if you’re a Pokémon completionist, it’s a necessity. 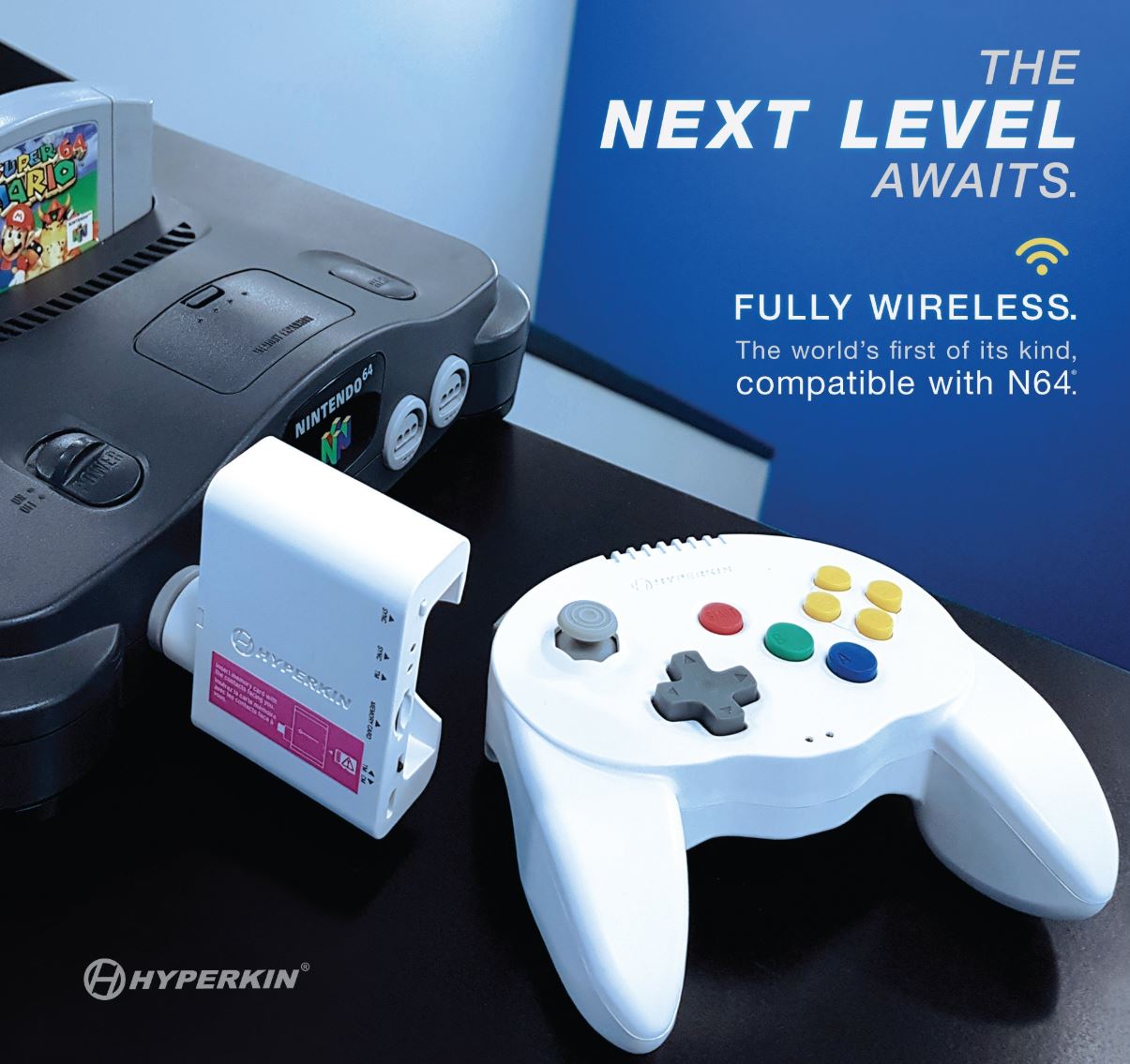 For some reason, while the Admiral’s dongle supports memory cards just fine, it doesn’t play nice with the Transfer Pak. But there’s a clever workaround that gets the job done. Connect the Admiral into the primary controller port. Next, plug the Transfer Pak into a standard, wired controller and connect that controller into any other port. This will allow you to use your Transfer Pak, while still gaining the benefits of your wireless controller. One thing you won’t be able to use is a Rumble Pak. This is disappointing, but understandable given the design.

If you’re a Nintendo fan and you want even more ergonomic solutions, there’s no need to stop with your N64. For example, the Nintendo Switch has a ton of fun, social games that you won’t find on other consoles. If, that is, you can manage the woefully awkward controls. For a better experience, check out the HORI Nintendo Switch Split Pad Pro Ergonomic Controller. It offers all the controls you need for the Nintendo Switch, with a much more comfortable profile. 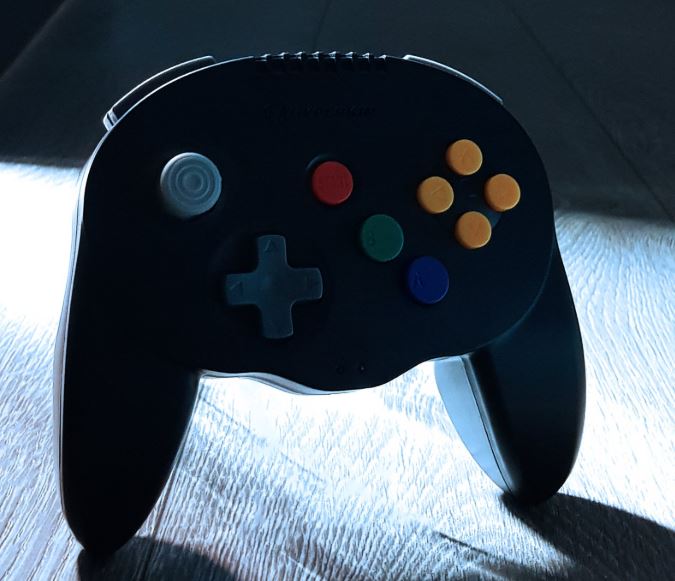 The Hyperkin Admiral Premium BT Controller is the best N64 controller to hit the market in recent years. If nothing else, it’s certainly the most innovative. First off, there’s a lot to like about the overall design. The switch from a 3-grip to 2-grip design makes it easier to hold, and actually increases your options. The Bluetooth connection is also quite good. With the 5.0 protocol, you’ll get less latency than most other wireless systems. And while Bluetooth 5.0 has become the new standard, it’s nice to see Hyperkin keeping pace.

In addition, we liked the SD slot for keeping backups. The only disappointment was the lack of a rumble function, which would have been easy enough to integrate. Still, the Admiral is the best N64 controller for extending your range. Considering that that’s the main reason for using it in the first place, we’ll call this a win.