Nearly every part of the home theatre experience can easily be made portable. You can carry around an entire library of films inside your smartphone. But display screens have largely remained somewhat non-portable, especially if you’re looking for something that’s substantially larger than your phone’s screen.

Essentially your only option is a projector. If you’re really interested in portability, you want a mini projector specifically, the smallest type of portable projector. With current projection technology, it’s possible to cram highly functional projectors inside a form factor that’s scarcely larger than a few smartphones stacked together.

But if you’re not willing to head into the price territory of $500, then there’s a variety of trade-offs that occur within a mini projector’s feature set. Those trades can be made favorably or unfavorably, depending on where you intend on using your projector. Which is why for finding the right mini projector, it’s important to carefully examine those decisions and match them against your expectations.

People who are searching for miniature projectors will find the iCODIS RD-818 Mini Projector a curious contraption. It’s either precisely what you’re searching for, or it will turn you away from the idea of mini projectors altogether. 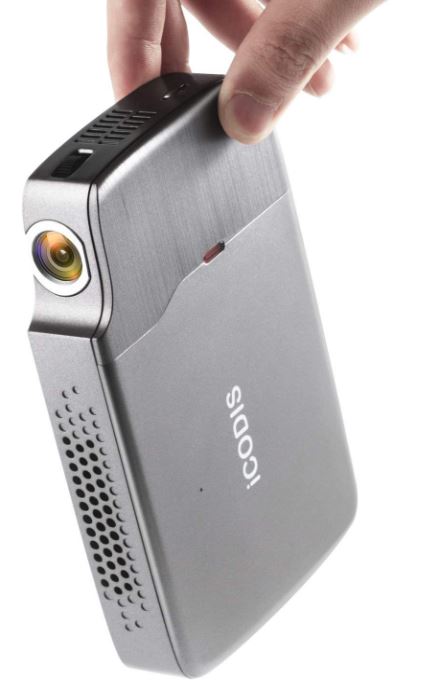 With respect to portability, the RD-818 is definitely small enough to fit in your pocket. But in spite of its humble size, the 818 is a fairly feature-rich projector. While clearly built to place effective portability above all other concerns, the RD-818 is more than competent when put to the task of playing games, watching movies, and creating attractive presentations.

Placed flat on your table, the iCODIS RD-818 measures 6.6 x 4.2 x 1-inches. That’s slightly larger than the biggest smartphones on the market, most noticeably with its 1” depth. Because the RD-818’s size is so closely comparable to a smartphone, it’s a very effective analogy for explaining how portable this mini projector happens to be. Essentially anywhere you can stick a phone, the RD-818 will be at home.

The iCODIS RD-818 weighs roughly 0.7 lbs., which is about 50% heavier than an iPhone X. When you stick it in your pocket, it has a more noticeable heft than a smartphone. But not so much that the weight feels burdensome, or even more noticeable than carrying a phone. 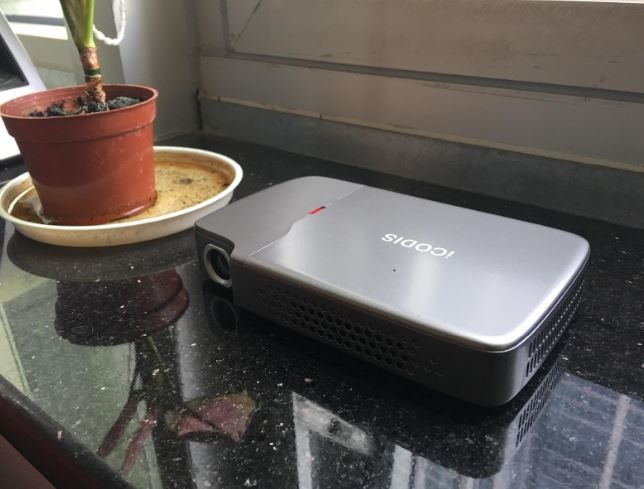 Although it’s small in size, the RD-818 finds ways to be large in other ways. For example, its projection size extends from 20” to 120”. That’s very nearly the same range of screen sizes that you’ll find on full bodied projectors that are not nearly as portable.

Most mini projectors are constructed with a spinning wheel design, paired with color filters to adapt your image on the go. It’s a cheap-and-easy way to make projectors mobile. But the iCODIS RD-818 is a digital light processing projector. That means it’s constructed to project light with the aid of countless microscopic mirrors. It’s not just a difference in how the projection is done, but in efficient use of light. That can help bolster the RD-818’s contrast ratio, as we’ll see in a moment.

Another important thing to note is the RD-818 has a throw ratio of 1.4:1. This ratio describes the size of the image you can produce with respect to the RD-818’s distance from the surface it’s projecting against. For achieving the maximum 120” display, you’d need the iCODIS RD-818 to be about fifteen feet away. The 1.4:1 ratio is actually quite favorable for mini projectors, ensuring that you don’t necessarily have to place the projector in-front of you during viewing for achieving the best picture. 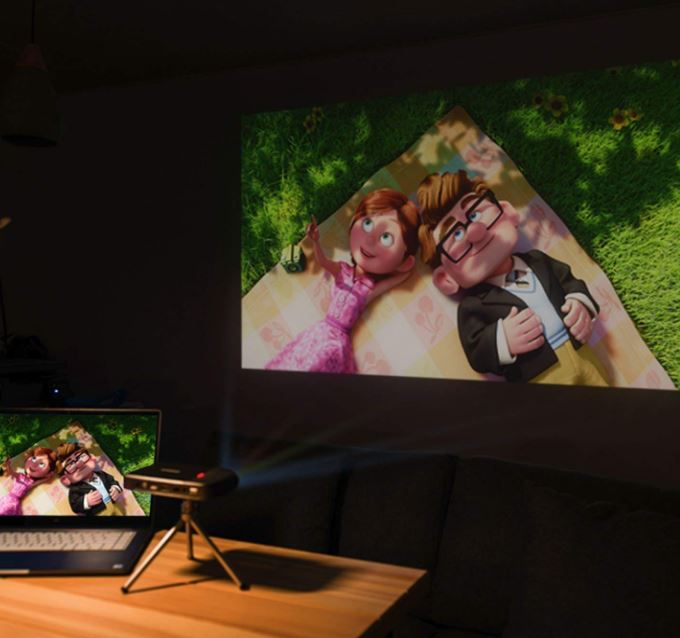 Depending on your needs, you may have cause for concern with the RD-818’s resolution. The maximum input resolution for this projector is 1080p, meaning it has no problem playing high definition content. But the native output resolution is 480p, which is standard television definition. That means you can put your 1080p content into the RD-818, but what’s coming out the other side will be 480p.

Yet surprisingly, your content doesn’t come out looking exactly like a television from two decades ago. That’s because the image quality isn’t entirely a matter of resolution. The iCODIS RD-818 provides a powerful contrast ratio of 2000:1, which is fairly impressive for a portable mini projector. It’s enough to provide fairly darks blacks and bright whites, and it helps boost the 818’s image quality beyond what you may anticipate from standard resolution content. 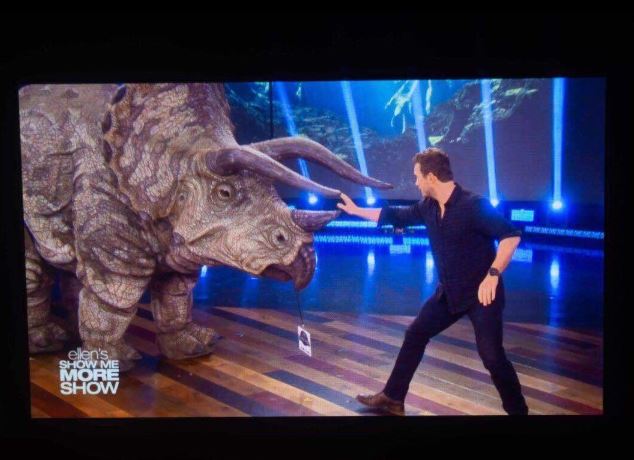 It also contributes to being able to use the iCODIS RD-818 modestly bright rooms. As anyone can tell you, projection will always look best within dark environments, and that’s where the 2000:1 contrast ratio really shines. But having a stronger contrast ratio out of the gate gives you more to work with when projecting in rooms with natural light.

With respect to brightness, the RD-818 is on the brighter side of the mini projector spectrum. Its 2000 lumen display isn’t going to work outside on a sunny day, but it’s nearly four times as high as some of the lower-powered mini projectors on the market. In short, it provides enough brightness for clear visibility in mediocre conditions.

Setup of the iCODIS RD-818 Mini Projector is nearly as simple as pushing a button. However, one difference between extremely high-end mini projectors and more accessible projectors can be found in focus. The RD-818 uses what could be called a highly competent manual focus, which makes the RD-818 adaptable to almost any environment.

But the fact it’s manual adjustment does mean you have to take a few seconds to set it up each time you move the projector from one environment to another. You may also end up needing to make use of keystone correction, depending on the angles from which you’re projecting. Keystone correction can be a take-it or leave-it feature for less mobile projectors, but it’s essential for mobile use. Especially when you’re not certain about the conditions of the room where you’ll be setting up.

And then there’s the remote. Like the somewhat simple iCODIS RD-818, the IR remote is somewhat simple as well. It provides essential volume management, directional controls, and menu access. It doesn’t attach or store-away on the RD-818 in any capacity, which may slightly decrease the portability of this projector if you insist on having the remote with you. 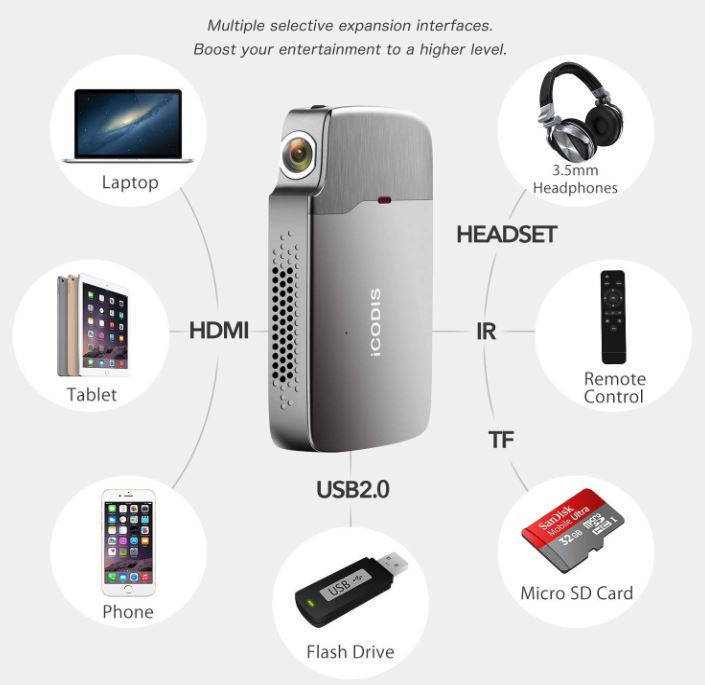 The 0.7lbs weight of the RD-818 is largely composed of battery weight. It’s constructed with a high capacity rechargeable 4,200mAh lithium ion battery, which is about as powerful as a larger laptop’s battery. That kind of power is necessary for the 818’s fairly bright 2,000 lumen display, but it also means you’re burning through electricity significantly quicker than other mini projectors.

How long does it the RD-818 last? Unfortunately, that’s not a simple question to answer. It depends on what you’re playing, and your willingness to make adjustments to the brightness of the projection. But a fairly conservative approximation is between ninety minutes and two hours, or roughly the length of the average movie.

Another difference between a full-bodied projector and a Mini-projector is that smaller versions tend to have fewer options for connectivity. That’s especially true outside of the $500 price range. Luckily, the RD-818 has essentially every significant type of port a person could ask for. That includes one HDMI port, one USB port, and SD card port.

Beyond that, you’ll only find an earphone port for connecting headphones or speakers. The lack of features like Bluetooth and Wi-Fi is partially reflection of the RD-818’s exceptionally small size, but mostly a result of its mid-range price. 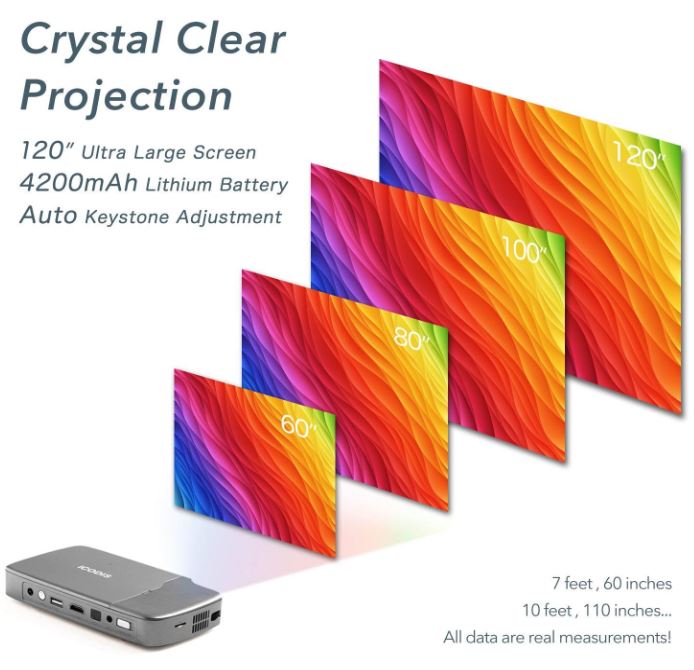 The RD-818 includes a small tripod, which is usually necessary for operation. Without the help of a tripod, mini projectors are vulnerable to visual shaking from the smallest bumps. Tripods are also useful for getting better vertical positioning for projection, and can come in handy for transportation occasionally.

But the tripod’s construction is fairly unimpressive. It’s best feature probably how lightweight and easy to transport it is. Its worst feature is the threading by which you connect devices to the tripod, which is capable of causing harm to the RD-818 if you tighten the connection with too much force.

There’s something to note about the USB port. It supports photos, videos, text, and music without a problem. However, their OS isn’t sufficient for running Microsoft Office. Even though all the individual elements of a PowerPoint presentation are possible to operate, PowerPoint documents themselves are not.

The RD-818 includes a recharging cable, HDMI cable, remote control, tripod, and user manual. Unfortunately, the user manual isn’t particularly informative. But the fairly simple nature of the RD-818 ensures that it’s possible to figure out everything you need to know about operation within a few minutes on your own. 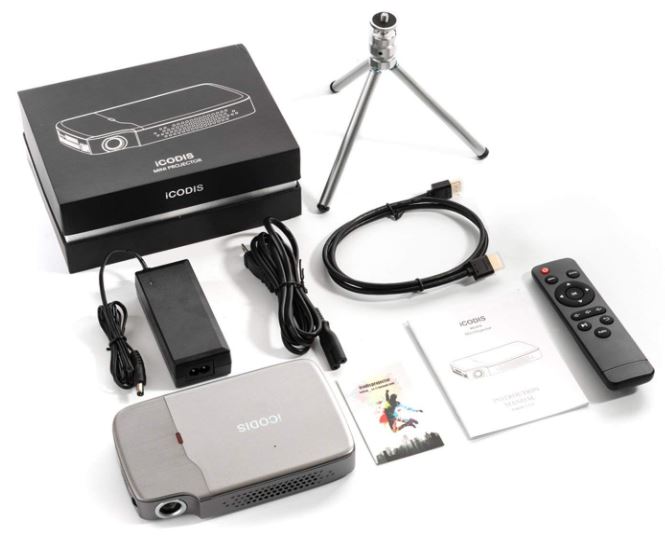 Who Should Choose the iCODIS RD-818 Mini Projector?

If you’re not going to use a projector for its portability, then you’d be better off selecting a larger projector intended to stay-put. Additionally, the RD-818 may or may not be the right choice for someone dissatisfied with manual focus or a lack of support for PowerPoint.

Those issues aside, the iCODIS RD-818 is everything a mini projector should be. As far as portable screens go, you can scarcely find competitors for the RD-818 within its price range. Its value can be extended further if you’re able to find use in the fairly decent tripod. But the quality of this projector really hinges on its ease of use, making the RD-818 worth a look for anyone interested in being able to take a 120” screen on the go.