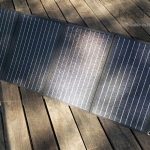 If you’re looking for an unlimited source of energy, look no further than the great fusion reactor in the sky. No, we’re not talking about some science fiction creation; we’re talking about the sun. Solar power is here to stay, and it’s reshaping the way we build our power grid. With more and more efficient solar panel technology, solar is getting more reliable by the year. And with decreasing costs, it’s not just for power companies and big commercial operations. With the right equipment, anybody can make use of solar power.
What might this look like for the average person? In many ways, it depends on what your application is. Suppose you have a hunting cabin. You might want to rig a small off-grid system to power a few electric lights and a mini fridge. At home, you might want to save money on your power bill. In that case, installing your own solar array can be a good option.

You might also want to use a portable or storable solar panel. This is the ideal solution if you’re prepping for natural disasters. You can keep your solar panel stowed in a closet, and bring it out when there’s a power outage. A smaller panel is also ideal if you’re camping or RVing. A big rigid panel won’t be very convenient to store and carry. But a portable panel can be used when you need it and stowed when you don’t.

We’re about to review the Itehil Solar Panel. This is a folding solar panel that’s designed primarily for on-the-go use. This isn’t to say it can’t be used for your hunting cabin or emergency preparedness. But a number of its features are specifically geared towards campers and RVers. So, how well does it perform compared to other, similar solar charging panels? We’re about to find out. We’ll look at the physical construction, and the materials it’s made from. We’ll look at the overall charging performance, and what you can plug into it. We’ll finish up by talking about the panel’s safety features, as well as any other relevant details. Once that’s done, we’ll sum up what we’ve learned and render our verdict. 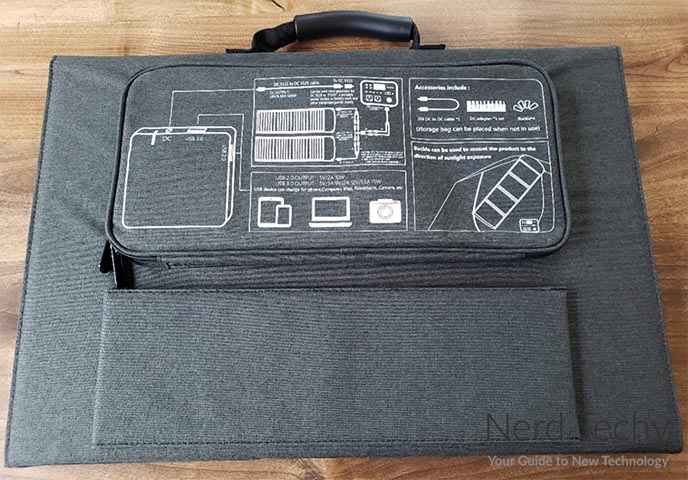 The Itehil Portable Solar Panel isn’t actually a single panel. It’s actually four smaller panels, built in a fan-fold design. As a result, they can be folded up for storage, and opened wide when you need them.

When folded up, the total dimensions are 20.47 inches in width, 14.7 inches high, and 1.97 inches thick. That’s about the size of a slim briefcase, and the weight is commensurate with the size. At 11 pounds, it’s easy enough to carry around a campsite or RV campground. That said, it’s still a bit beefier than we’d prefer for a backpacking solar panel. 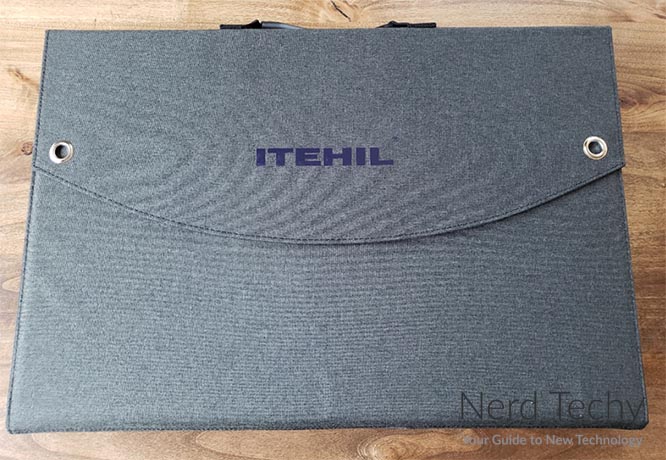 When collapsed, the panel looks like a fabric briefcase, complete with a folded-over front panel. There’s also an ergonomic plastic handle. This is yet another feature that makes it easy to carry around. We liked this feature, and it speaks to how well thought-out the design is as a whole. 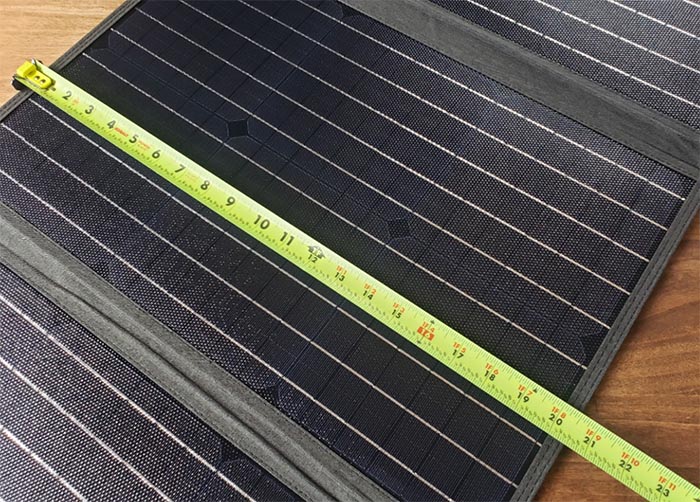 When it’s opened wide, the Itehil panel measures around 56 inches long and 20 inches wide. That’s nearly five feet long, so you’ll need a reasonable amount of space to lay it out. Even so, it’s small enough to set up in a truck bed if need be. On each of the four panels, you’ll see six smaller segments, with white pinstripes through each one. You’ll also see the stitching in the shell, which is clearly durable and can stand up to significant abuse. Finally, at the left, you’ll see the velcro closure strip, and an arrow pointing to a pocket with the power ports. 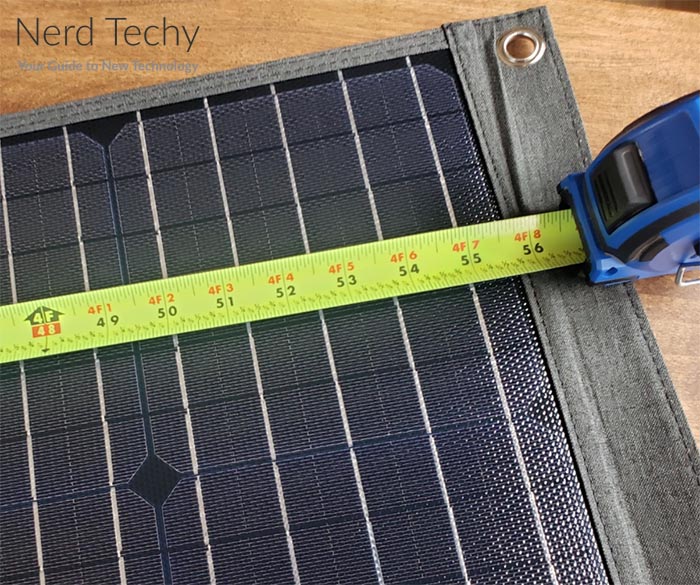 If you want a smaller, more portable panel, consider the Choetech 80w Portable Solar Panel Charger. It’s about 30 percent smaller, so it’s easier to move around. On the other hand, it has 20 percent less capacity, and at eight pounds, it’s still heavy for backpacking. 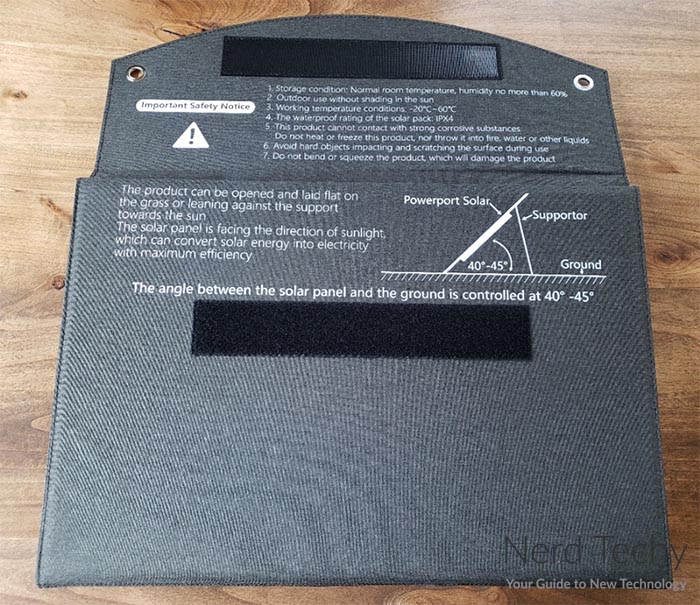 The Itehil Solar Panel comes with a few extra features that are designed to make it easier to set up. To begin with, there’s a sturdy kickstand on the backside. This allows you to prop it up at an angle to improve the charging rate. The stand can be adjusted, so you can alter the angle as needed within a certain range. There are also metal grommets at the corners, so the panel can be hung up in the air. You’ll find four black carabineers in the package for exactly this purpose. 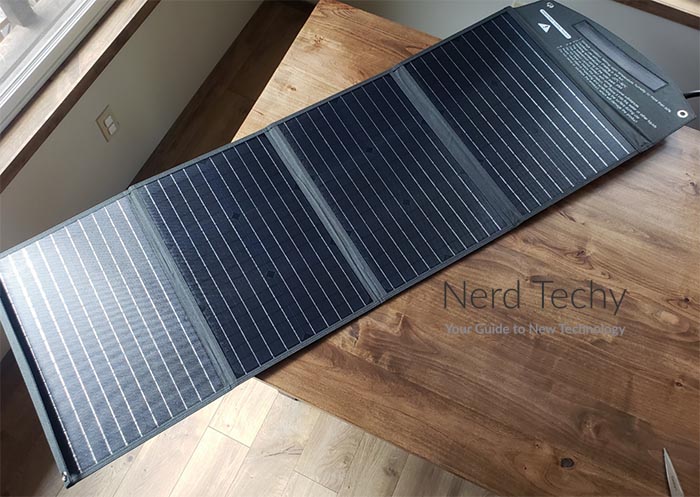 Other than the solar cells themselves, the rest of the panel consists of a stiff Oxford fabric. This fabric is thick and tough, and has a slightly textured surface. It’s durable enough to be scratch and tear-resistant, and to protect the backs and sides of the cells. It comes with a water-resistance of IPX4, which means it’s splash-resistant. In practice, a little bit of misting isn’t going to hurt it. But if there’s any kind of actual rain, you’re going to want to bring it inside. That’s just fine, since a solar panel won’t do much during a storm to begin with.

The solar cells on the Itehill panel are constructed from monocrystalline silicon. Many solar panels are constructed from polycrystalline silicon, which is a cheaper material. Silicon comes in crystals, which allow for limited electrical conduction. The larger the crystal, the more you can do with it. However, larger crystals are harder to manufacture, and cost more money to procure. As a result, it’s cheaper to use smaller crystals whenever possible. 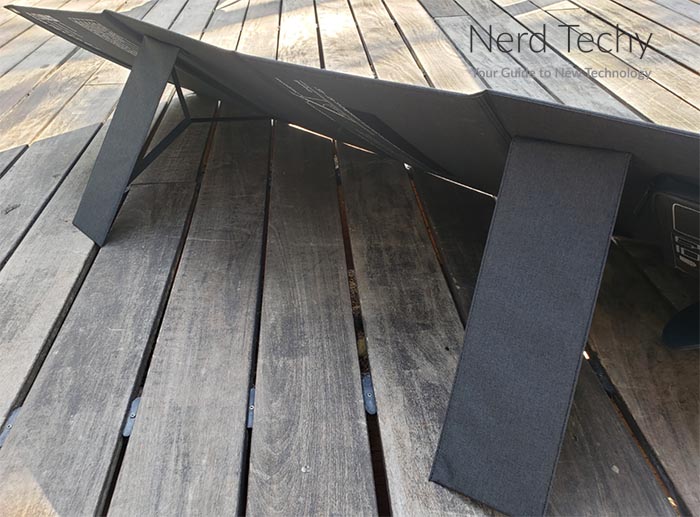 The problem with this is that smaller crystals are too small to make a solar cell. To overcome this limitation, manufacturers will melt down multiple crystals and mix them together. That’s where you get the term “polycrystalline.” Unfortunately, mixing materials from different crystals makes it harder for electrons to move through the material. This increased resistance reduces the efficiency of the panel as a whole. Monocrystalline silicon, on the other hand, is cut as a wafer from a single, large silicon crystal. This costs more than the other method. However, because the material all comes from the same crystal, there’s less resistance. This, in turn, results in increased efficiency. In the case of this solar panel, you’re getting 21.5% efficiency, compared to a market average of 18%. That’s pretty good, to say the least. 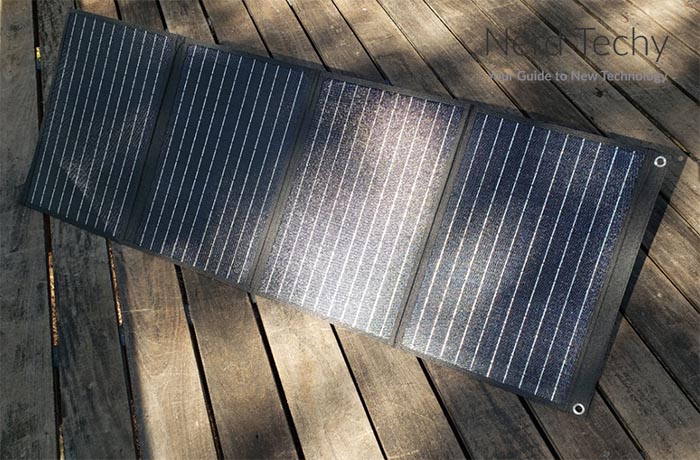 The total power supply of this panel is rated at a maximum of 18 volts, 5 ½ amps, or 99 watts. Keep in mind that this is a maximum, and can be affected by poor conditions. For instance, you won’t get optimal performance if your panel is located in the shade. If you’re going to leave it in place while you go on a day hike or go out hunting, think about this. Where will the sun be in two or three hours? If you can keep the panel fully exposed all day long, you’ll get the best bang for your buck. 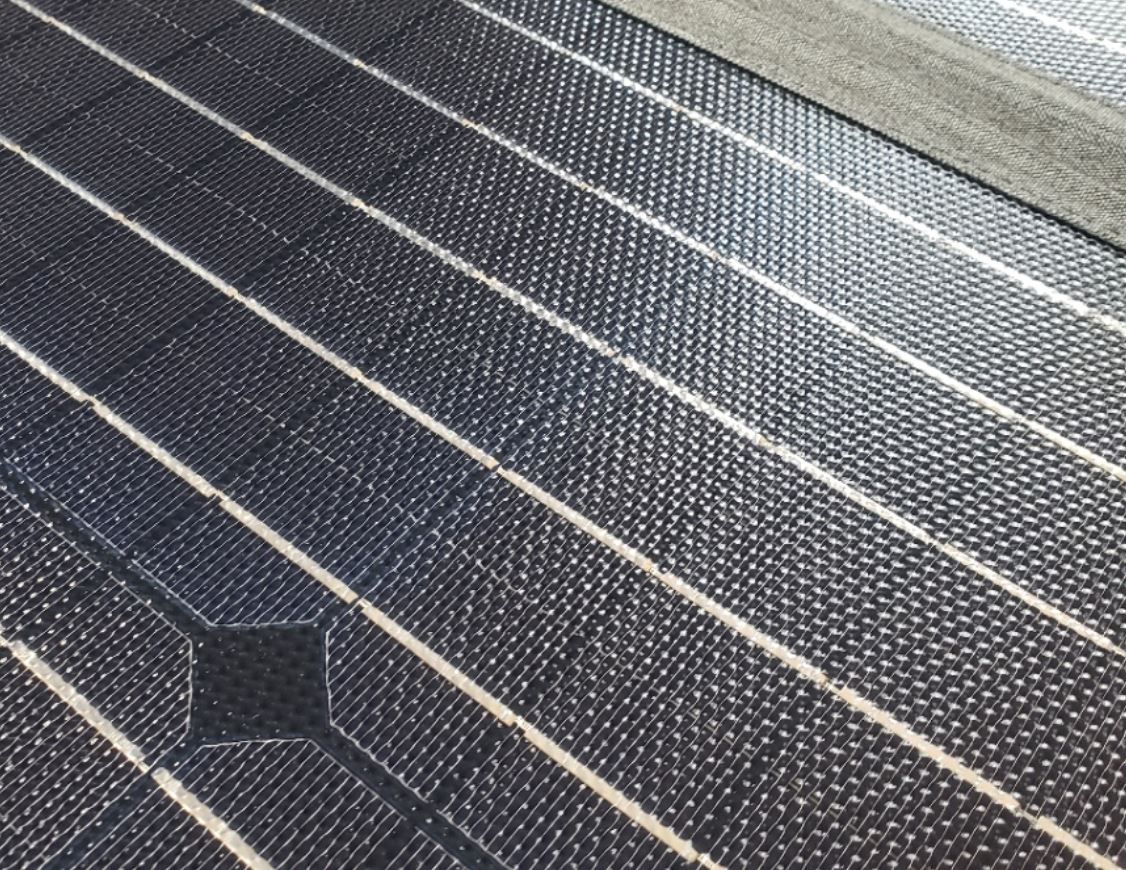 This panel normally performs quite well, and you can rely on getting the maximum on sunny days. With that power, there are a number of devices you can connect. To begin with, there’s a USB 2.0 port. This provides 5 volts at 2 amps, for a total of 10 watts. That’s not terribly impressive, but it works fine for lower-wattage devices. For everything else, you’ll want to use the USB 3.0 port. This can provide a variety of current options, between 15 and 18 watts. It’s a better choice for newer smartphones, or for any device with a larger battery. Both ports are clearly marked, so you won’t have any trouble figuring out which one is which. Keep in mind that these ports only work when the solar panel is actually getting sun. There’s no built-in battery or power supply to provide backup power. 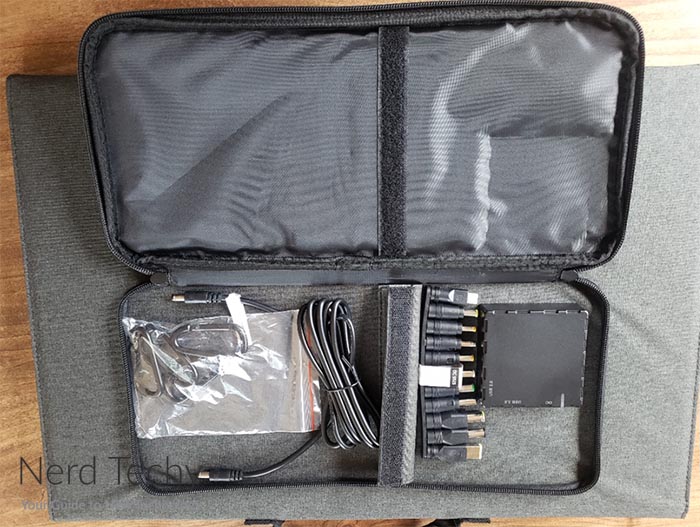 One thing that impressed us about the Itehil Solar Panel is its reliability. It’s rated to function between -4 and 140 degrees, and it seems to deliver. This makes a big difference, since weather is not always going to be perfect. In fact, the power is more likely to go out in extreme conditions. Wattage does seem to drop a bit in the clouds. But even under moderate cloud cover, you can get a solid 12 volts. The only time you get into trouble is when it’s very cloudy or raining. But in that case, you probably want to bring the panel inside to begin with. 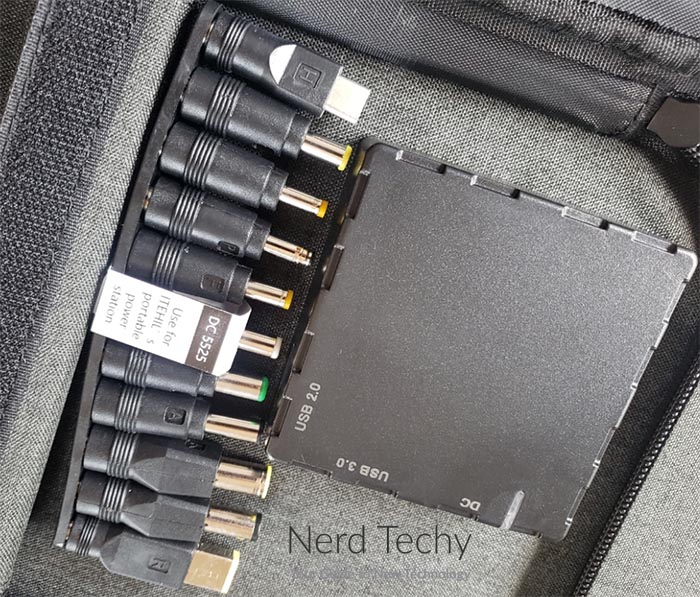 In addition to the ordinary USB ports, there’s also an 18-volt DC port with a DC 5521 to DC 5521 tether cable. This is meant to connect to a solar generator or power bank. However, there are a number of standards for DC power, and DC 5521 is only one of them. For this reason, the kit also includes 11 adapters in a variety of styles. For most power bank brands, you won’t have any issue making a connection. 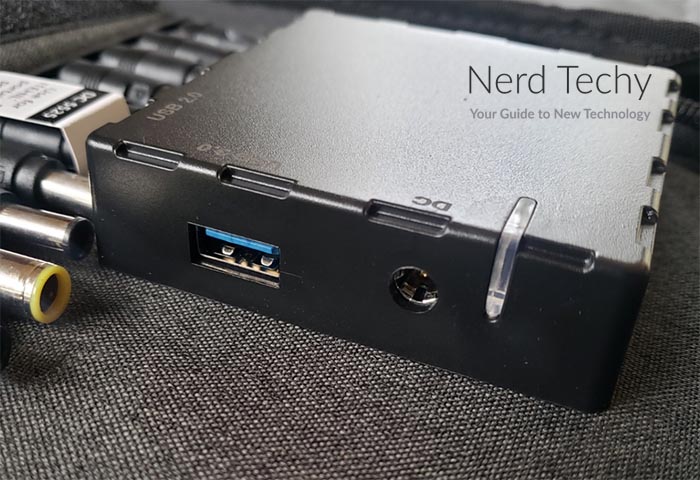 One thing that disappointed us is that there’s no built-in MC4 connection. This is the type of connector used to daisy-chain multiple solar panels together. As a result, you can’t use an MC4 connection unless you purchase the adapter kit in addition to the panel.

That said, if you’re creating a larger grid, you probably want to use 12-volt panels. Long story short, it’s the most versatile voltage for this type of system. You’re also going to want a more rigid, durable panel. If that’s what you need, check out our list of the best 100-watt, 12-volt monocrystalline solar panels. Those options are going to be closer to what you need. 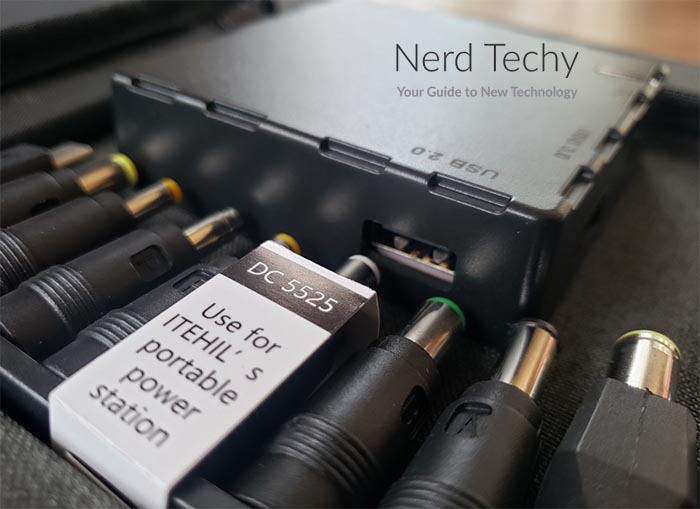 The Itehil Solar Panel is one of the best in its class. It’s tough, it’s durable, and it’s efficient. It works well in almost any weather conditions, and it puts out a robust 99 watts of power. The only drawbacks are minor, and the overall design is among the best we’ve seen. If you need a collapsible solar panel, we heartily recommend this solar panel.