If you want a quality wireless keyboard that’s compatible with multiple operating systems, you don’t have a ton of options. A few weeks ago, we reviewed one of those options: the Keychron K2. This compact, tenkeyless keyboard is exceptionally rugged, with an internal aluminum frame and clicky Gateron Blue switches. It’s designed for use with multiple devices, and can be connected to three devices simultaneously. It’s compatible with Windows, Mac, and Linux/Android machines, so you can use it with virtually any device on the market. That said, it’s tenkeyless, which makes it a poor choice if you frequently use your number pad.

The K2 (and the similar K1) were Keychron’s first offerings, both of them launched via successful Kickstarter campaigns. When both of those keyboards became popular, Keychron began receiving requests for a keyboard with a number pad. The K4, currently available for pre-order on Kickstarter, is Keychron’s answer to those requests.

The K4 isn’t actually a single keyboard. It’s a family of keyboards, with several different options available. That said, the “guts” of the keyboard are similar across different variants. When there are differences, we’ll make sure to explain all the options. Now, let’s take a closer look! 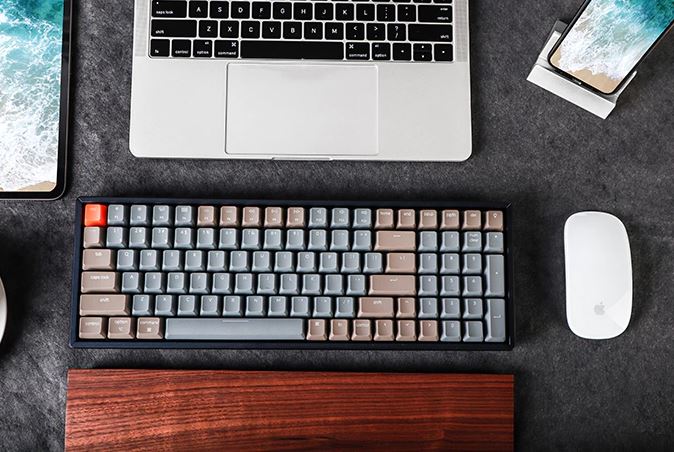 The K4 is a mid-sized keyboard that’s a compromise between a compact tenkeyless keyboard and a full-sized board. All 100 keys are packed into a solid grid, without any dead space or separation between different groups of keys. The only keys that we noticed are missing are “print screen,” “pause/break,” and “scroll lock”. That’s two keys that we haven’t used since the mid-90s, and another that we don’t think anyone has ever used in the history of computing. So, for all intents and purposes, you’re getting a fully-functional keyboard. 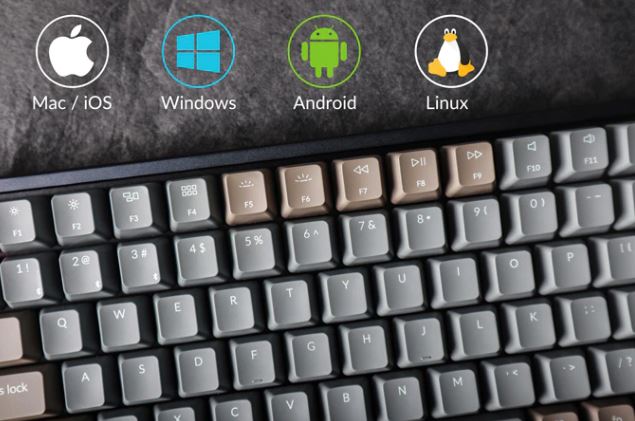 Despite the crowded layout, the keys are easy to read and locate. The alphanumeric keys and the num pad are both flat gray, while the function keys, arrows, and other keys are tan in color. The Escape key is bright orange, which adds a touch of color to the top left corner.

There are two different choices for backlights: plain white and RGB. The RGB backlight uses 18 separate LEDs, which can be programmed to 15 different presets. At this time, there’s no option for customizing them, but 15 choices should be just fine for most people. At the end of the day, this is purely a cosmetic feature, but it’s become standard on mechanical and gaming keyboards.

The frame comes in two varieties: aircraft grade aluminum and ABS plastic. The aluminum frame is ever-so-slightly bulkier, but only by about half a centimeter on either side. It’s noticeably heavier, though, weighing in at 927 grams (2.04 pounds), whereas the ABS plastic variant weighs 761 grams (1.67 pounds). Other than that, it’s just a matter of price and preference. If you’re willing to pay a few extra dollars for a more durable frame, get the aluminum one. If plastic is good enough, choose the plastic frame.

By default, the keyboard is laid out for Windows users, with a Windows Start Menu button and function keys. However, the package comes with Mac and Command keycaps that can easily be swapped in if you want your Mac keyboard to look like a Mac keyboard.

On the bottom, you’ll find a pair of rubber feet that can be extended to put the surface of the keyboard at a comfortable, 8-degree slope. Most people will find that this is the most comfortable typing angle, but you can also leave the feet collapsed if you prefer a flat keyboard.

The K4’s keycaps are constructed from doubleshot ABS plastic. This is more durable than standard ABS keys, and will last longer than any of the switches or other components. That said, ABS keycaps get glossy over time and develop a shiny finish. Some people don’t care about this, but for others it can be a deal breaker, so it was definitely worth mentioning.

For switches, you get several different choices, but they fall into two broad categories: optical and mechanical. Here’s a closer look at both categories. 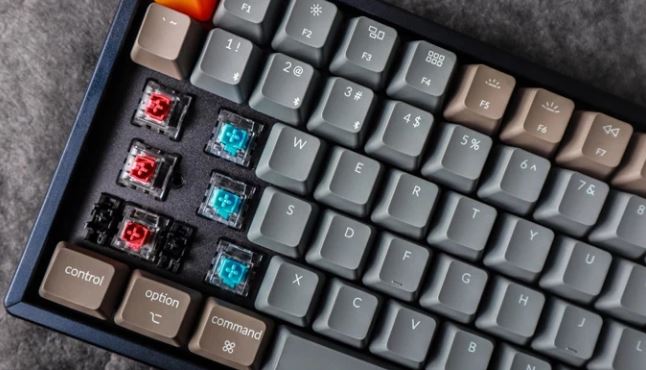 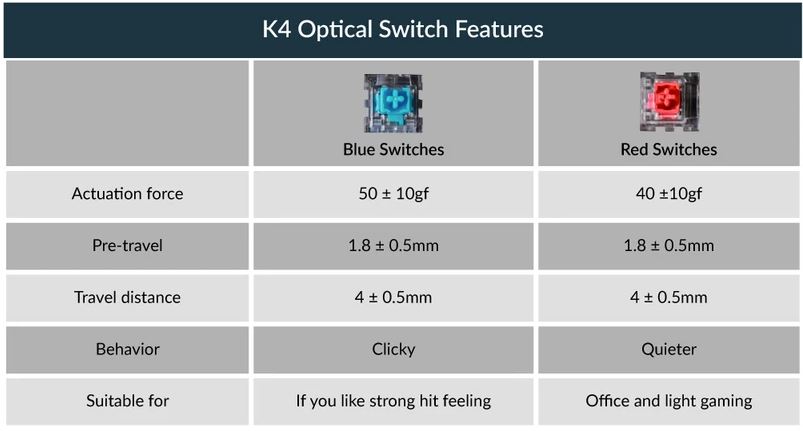 There are two different options: red and blue. The red switches are relatively quiet, and are well-suited for use in an office environment. They also offer a relatively light touch, requiring only 40 grams of force to press. If you prefer a clickier feel, the blue switches are a bit stiffer, requiring 50 grams of force to actuate. That said, they’re fairly loud, so you won’t want to use them if you work in a cubicle or an office pool.

Alternatively, you can order your K4 with any of four different Gateron switches. These switches are oftentimes compared to Cherry MX in terms of quality. And while it’s true that they’re just as durable, they’re not identical in terms of function. So a Gateron Red, for example, won’t have the same specs as a Cherry MX red. That said, they’re rated for 50 million keystrokes, so you can use this keyboard for years without any of the keys losing sensitivity. 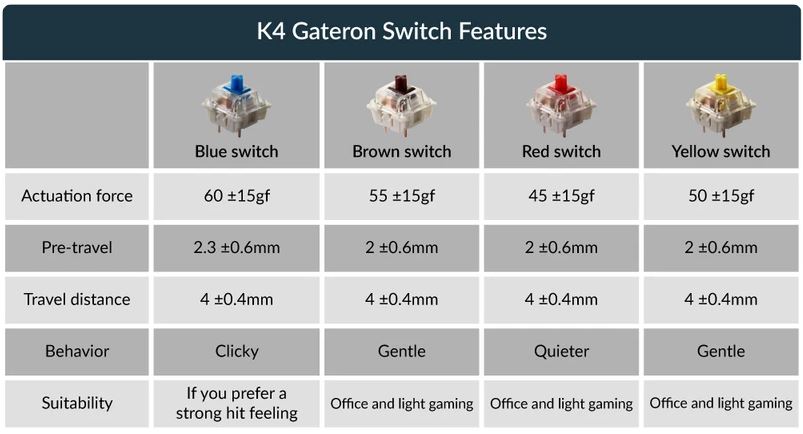 The four choices are Blue, Brown, Red, and Yellow. The Blue switches are stiff and clicky, and require 60 grams of force to depress. They’re also loud, though. The Brown and Yellow switches are nearly identical, requiring 55 and 50 grams of force respectively. Both of these are considered “medium” switches, and they produce a moderate amount of noise. The Red switches are the lightest, with only 45 grams of pressure needed to actuate. They’re also the quietest, ideal for office environments.

If you prefer the softer feel of Topre switches, read our Fujitsu Realforce R2 review. These switches are popular because you can adjust the travel distance with software, so you’ll have a truly customized touch. In addition, the Realforce R2 has PBT keycaps, which are exceptionally durable and will not develop a glossy finish over time. That said, it’s a bit pricey, but you get what you pay for. 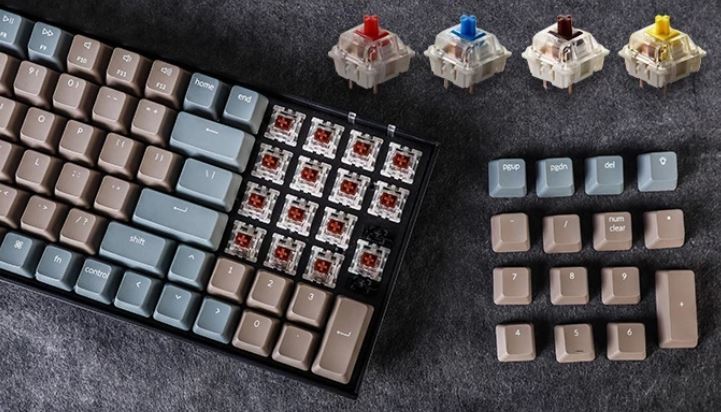 The Keychron K4 can be operated either via Bluetooth or by USB-C. If you don’t want to worry about batteries, you can simply leave it plugged in, but the Bluetooth connection is great for travel or for connecting to multiple devices. All in all, you can connect to three different devices simultaneously. By using the function and number keys, you can switch between different devices. If you use one computer for code and another for emails, you can switch back and forth with ease. While you’re at it, you can also connect to your smartphone, so you can respond to texts and other communication without having to take your fingers off the keyboard. 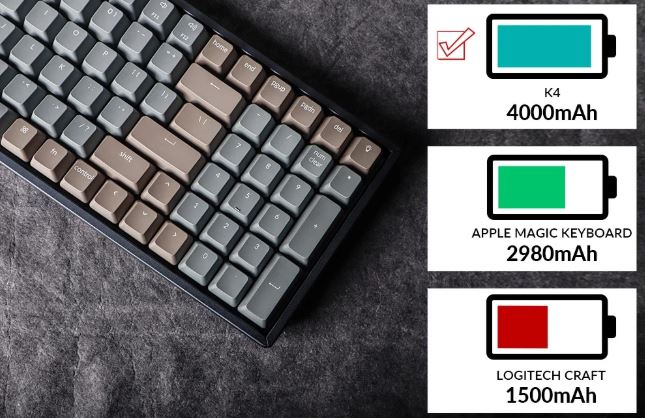 The K4 uses an internal, 4,000 mAh battery pack, which means you won’t have to mess around with AAs. It holds enough charge for about four weeks, provided you turn your backlights off when the keyboard is not in use. Obviously, this usage time will vary considerably depending on how much time you actually spend typing. When it comes time to recharge, the USB charger supports the very fastest USB power currently available, at 5V 2A. From a dead battery, you can fully recharge in only three hours. That’s not bad, particularly since you can use the keyboard while it’s plugged in. 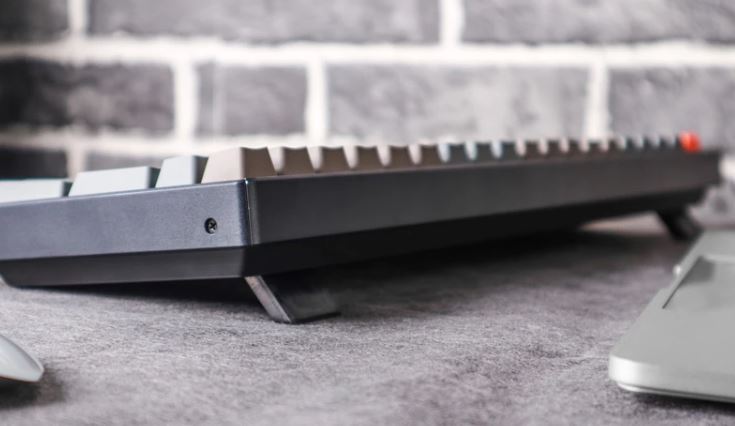 This keyboard features N-key rollover and anti-ghosting. What this means is that you can press an infinite number of keys simultaneously, and all the keystrokes will register. This is a great feature if you’re in the habit of quickly hitting a series of shortcut combinations. However, it really shines when it comes to gaming. If you use a lot of macros, you won’t have to worry about your keyboard refusing to register.

Like Keychron’s other offerings, the K4 is compatible with Windows, Mac, and Android devices. No matter what your operating system, you’ll have instant plug and play functionality.

If you’re looking for a dedicated gaming keyboard, the Corsair K57 should be right up your alley. It’s an oversized keyboard, with a row of six programmable macro buttons on the left side. In addition, there’s a row of dedicated media keys above the top of the num pad, so you won’t have to use shortcuts. The large size is not ideal for travel, but it’s a fantastic choice if you have a stationary gaming PC. 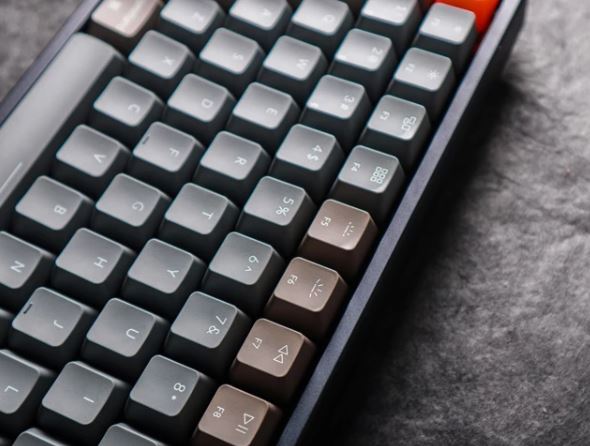 Before we wrap up, here’s a quick, top-down overview of the Keychron K4. Where there were differences between two different builds, we made sure to note what those differences are. 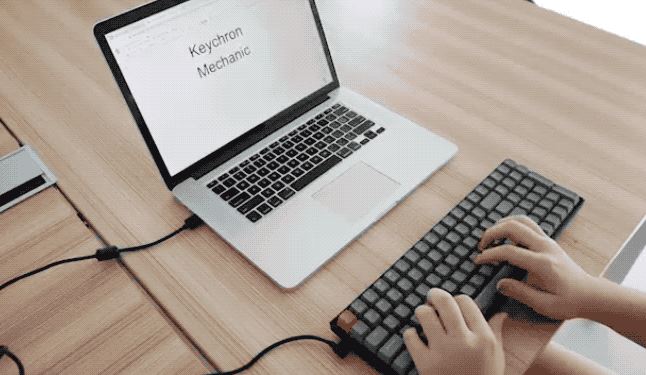 So, what’s our final verdict on the Keychron K4?

We think it’s a solid choice, whether for typing, gaming, programming, or a variety of purposes. Honestly, there are so many options and variations, it’s hard to think of anything that the K4 isn’t good for. But the main attraction is the mid-sized design. Many compact keyboards are tenkeyless, which makes them ill-suited for accountants, programmers, and anyone who needs to type a lot of numbers quickly. By fitting a num pad into a relatively compact layout, Keychron has solved this problem efficiently.

Another thing we appreciated was the ability to connect to multiple devices. This is a great feature if you do a lot of multitasking, since you can work on multiple computers without the need to hook up multiple keyboards. And although they’re just a cosmetic feature, the RGB backlights are attractive.