Finding an affordable router that offers superior performance can be a challenge. If you have a family or roommates, you’ll often struggle to get a decent wireless connection with a large number of devices using the same network. Recently, Linksys has released some impressive routers that offer superior bandwidth and traffic shaping. But those routers were sold at a premium price, and most consumer hardware simply isn’t fast enough to take advantage of the high speeds it offers.

For many users, it can feel as if you are stuck between a rock and a hard place. On the one end of the spectrum, you’ve got low grade consumer routers that just don’t live up to the demands of our modern technology. On the other, you’ve got premium routers that are overpowered and overpriced for your use. Today, Linksys is helping you find some middle ground with the Linksys Max Stream EA7300. This router has the powerful features that allow you to use high bandwidth internet connections through a large number of connected devices. Let’s take a look and see how it performs in the real world. 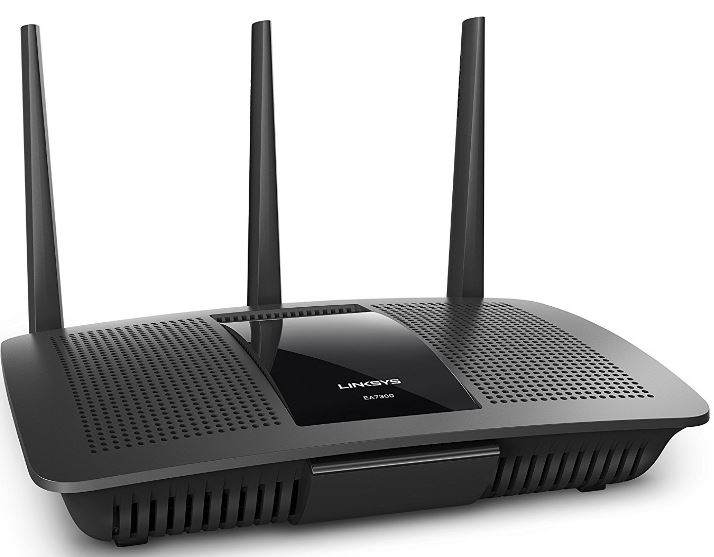 The Linksys Max Stream EA7300 has a sleek, modern appeal. It’s smooth black case is both utilitarian and professional. While it doesn’t have that same imposing look as some of their higher end routers, it also doesn’t have the classic “appliance” look as their older routers. You can certainly tell it’s a high quality router, but it doesn’t demand any extra attention. It’s the type of router you could place openly in your living room or tuck away in a closet. No matter what you choose, it won’t look out of place.

Getting the Max Stream EA7300 up and running was a simple and straightforward process, thanks to the included set-up wizard. You simply plug the WAN port into your modem, and attach the power. After a short boot up process, you’re ready to complete the final step. You can either log into the router through the open network connection, or physically plug into one of the gigabit Ethernet ports. Upon opening a web browser, you’ll be able to walk through Linksys’ step-by-step configuration guide. You’ll pick a name for your network, select a password, and then you’re ready to go. You can move on to change advanced network settings, or you can simply start using the internet right away. 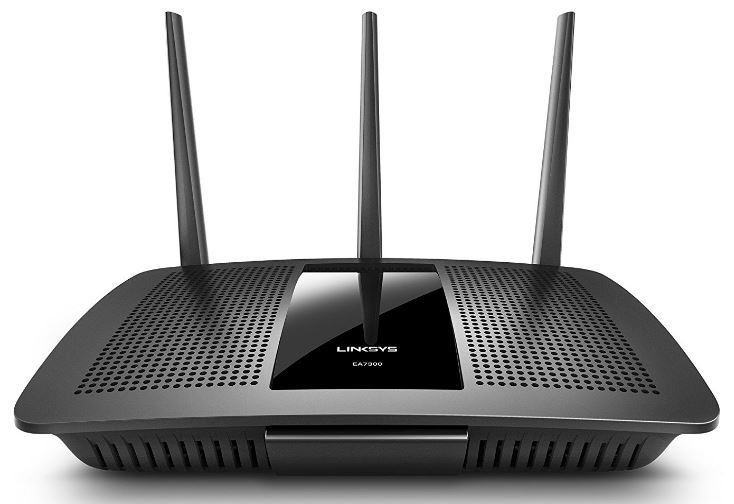 Both wired networking, wireless networking, and network attached storage is supported. Wired networking is connected through one of the four gigabit Ethernet ports along the back. To the right, you’ll also see the single USB 3.0 port that can be used to connect an external hard drive to be shared with the network, or a flash drive for the purpose of updating the firmware.

Of course, the wired connections are really just a small part of what this router is designed for. Wireless communication is facilitated through the high speed 802.11AC network. This system is capable of offering better bandwidth and improved range over older systems. Of course, if you have an older client that only supports 802.11b, 802.11a, 802.11n or 802.11g, you’ll still be able to use this router and all of its features. But if you want to take advantage of the impressive bandwidth, you’ll want to make sure you’re using an 802.11ac client. 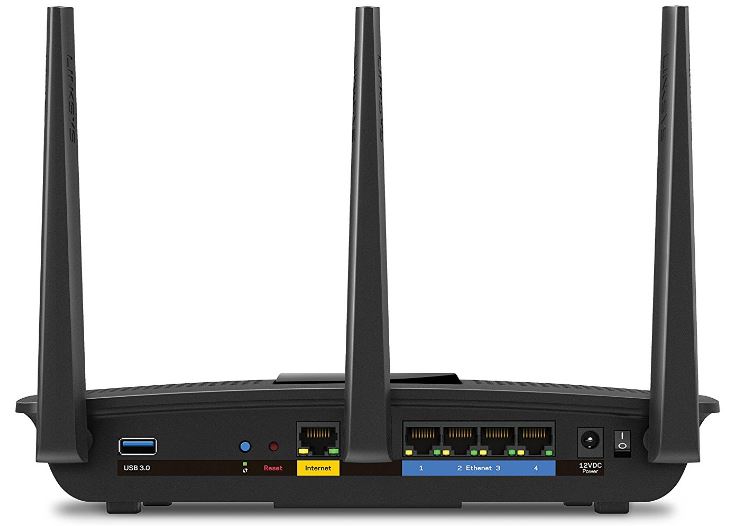 The 1.7 Gbps speed advertised sure looks impressive, but we all know that these theoretical rates are never possible in the real world. We decided to go hands on and see what kind of performance we could achieve.

In order to properly test the system, we used a laptop with an 802.11ac wireless networking card. We connected a PC to the gigabit Ethernet port, and shared some files on our local network to determine the transfer rate. Our first speed test took place in the same room as the router, with a distance of about ten feet. Transferring a few ISO files, we achieved an impressive 245 Mbps average transfer rate. This is some pretty impressive performance, more than adequate for streaming 4K video or accessing remote content in real time. But we all know that speeds can drop off quickly when you’re further away from the router, so we had to test it again from the other side of our house. During this test we were about 90 feet away from the router, and the signal was going through multiple walls. Our transfer rate went down to 115 Mbps. This may seem significant, but it’s still more than fast enough for every purpose we could think of. In most households, this is the minimum bandwidth you can expect.

We also wanted to take a look at signal quality, so we looked for dropouts or long buffer times while we were transferring files. No matter where we were in the house, we found that file transfer rates remained consistent with no signal issues at all. For this reason, the router is a great choice if you live in a large building and have trouble getting a decent signal. 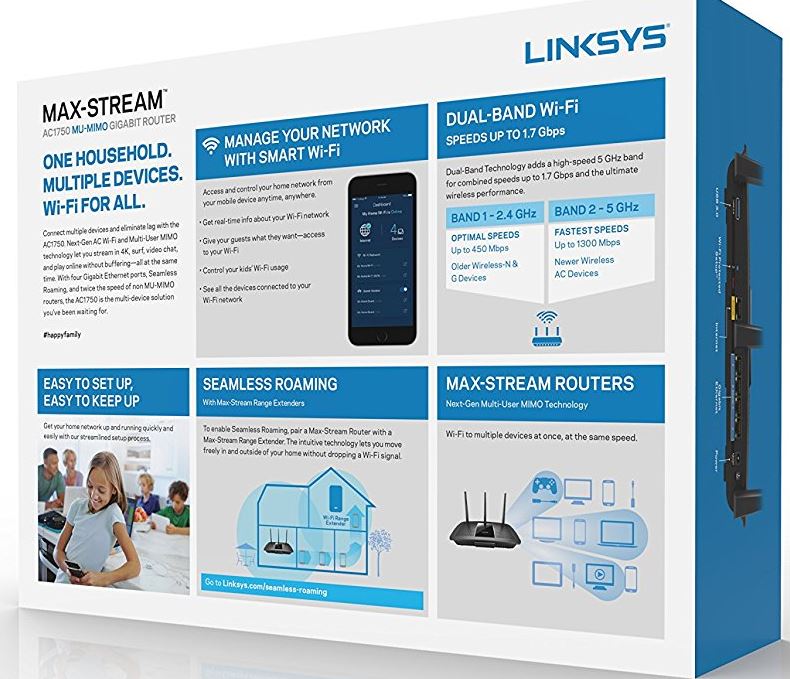 One of the most important features of the Linksys Max Stream EA7300 is the MU-MIMO technology. This stands for Multiple user, multiple input, multiple output. Surely, you’ve noticed that when a lot of people are using the internet at the same time, your connection can be quite poor. A wireless network can only handle so many requests at a time, so under heavy use some requests can be dropped. MU-MIMO means that this router actually creates three separate wireless networks.

If you have three devices, you’ll each have your own dedicated network. If you have six, you’ll only be sharing the connection with one other person. In our experience, this improved the connection speed by a very large margin. Torrent files are notoriously hard for routers to handle, as you’re often dealing with 200+ connections per torrent. But with MU-MIMO, our connection was still fast and responsive, despite what other users were doing.

A common misconception is that MU-MIMO will actually produce separate Wi-Fi networks, forcing you to manually select one to connect to. This is not the case. All users simply log on to the network just like any other router, and the Max Stream EA7300 will distribute your connections as necessary. Part of this system is an intelligent traffic shaping system that re-organizes connections as needed. For example, let’s say that you have 5 devices on your network. 4 of them are smartphones, only using the internet to occasionally check for notifications. The last one is a game console, running a network-heavy online game. In this case, the user that requires the most bandwidth would be given their own channel, while the low volume users will be divided between the remaining channels. This means that you’ll always get the best possible connection, without compromise. 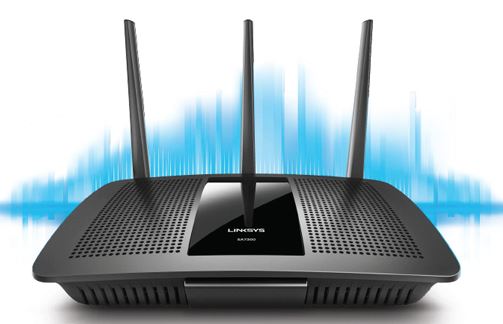 This router was designed to be simple to use, but still provide access to a number of highly advanced features. This is one through the Linksys Smart Wi-Fi application. You can install this app on your phone from the app store, or by visiting linksyssmartwifi.com from any internet enabled device.

At a glance, this application will tell you what devices are currently connected to your home network, and information about their connection. You can view standard information such as MAC address, IP address, and connection status. Alternately, you can set up advanced access control such as connection priority, schedule, or content restrictions through parental controls. These options are not rare, but finding them so easy to use is very rare, and a huge bonus for it. 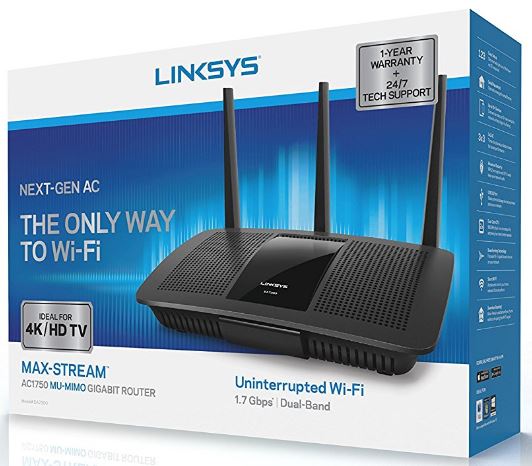 So, Should I Get the Linksys Max Stream EA7300?

For the average consumer, the Linksys Max Stream EA7300 may be one of the best values in routers on the market. It’s designed specifically for use in households that have a large number of devices, all requiring high speed internet access. If you don’t have the latest technology, you’ll still be able to enjoy the traffic shaping and MU-MIMO technology to ensure that everyone maintains reasonable bandwidth. If you do have an 802.11ac card, you’ll finally be able to enjoy the huge bandwidth possible.

For families, the parental controls are also handy to have. But if your family is primarily concerned with restricting how and when you children access the internet, you might prefer the advanced parental controls available in the Netgear Orbi. Users that have a 100 Mbit or higher internet connection and want the best possible speed should consider upgrading to the EA9500 router.

But for the average consumer, the EA7300 find the perfect balance between price and performance, and wraps everything up in an easy to use package.