TechGuru May 30, 2017 Networking No Comments

The number one metric used to measure the performance of our home internet connection is bandwidth. Faster is always better. A faster internet connection means that our web browsing is snappier, our files download faster, and our Netflix streams at a higher quality.

But the package you purchase from your home ISP isn’t the only thing used to determine our internet speed. There are several devices in between a remote server and the device you’re using to access the internet. Your final connection speed will only be as fast as the slowest device in the loop.

For most consumers, the bottleneck is the router. Your home router is responsible for taking a single network connection, and sharing the bandwidth amongst every device in your home. A poor quality router means slow transfer speeds, long ping times, and an overall disappointing networking experience.

Selecting the proper router requires that you understand what your needs are, and select a model that has the best technology currently suited to your application. Linksys’ Max-Stream EA9300 is one of their latest high end routers, promising to drastically improve the connection speed of anyone using it. But who is this router designed for? And what are the advantages of it over a cheaper model? In this hands-on review, we’ll show you all the ins and outs of this router. We’ll help you understand what it’s designed to do, and decide if this is something that should have a place in your own home network. 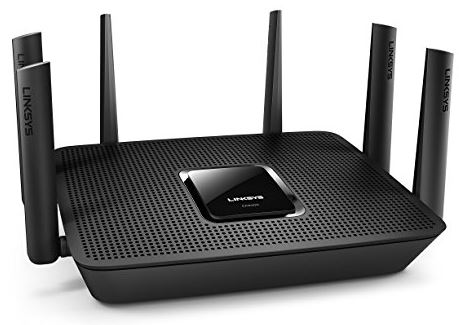 From a design perspective, the EA9300 is one beefy looking router. Six angular antennas surround the boxy enclosure, while the vent holes surround the sleek Linksys nameplate. But what you can’t tell from just a glance is that the internals are just as beefy as the external appearance. With a quad core CPU and three peripherial processors to perform the heavy lifting, the hardware is certainly not going to hinder your connection speed.

From a tech perspective, this router checks all the boxes. MU-MIMO means that this router can support a lot of users, and beam forming means that your wireless network will cover a large range. On paper, this is one of the most powerful routers on the market. But in the real world, we know that things often don’t work out quite as well. 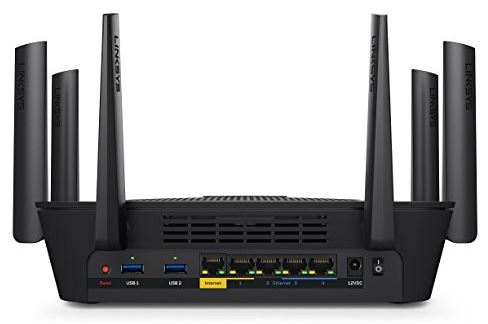 Wondering just how much data you can pump through this router? The maximum theoretical bandwidth is 4 Gbps. This metric puts it in a class well above gigabit Ethernet, but it’s important to understand where this number comes from.

The reality is that no single user is necessarily going to see 4 Gbps bandwidth. This is actually the combined throughput of all users, since this operates somewhat like multiple routers in a single package.

In reality, traffic travelling over the 4.2 GHz band caps out at around 1 gigabit, while you can get up to 2,166 Mb/s on the 5 GHz band. A single device equipped with the latest 802.11ac wireless networking card could reach the theoretical limitations of this bandwidth.

Generally, when you’re using that much data, that means that all the other devices on the network are choked out, and can’t get a good signal. But this is a tri-stream router. So you’ve technically got three separate networks, with all of the users being divided up equally across these four bands. If one computer starts streaming a ton of data, the other will be moved to a separate band.

In or tests, we were able to hit speeds approaching 950 Mb/s when we were close to the router. This makes this one of the fastest routers on the market, and there are very few devices that can match these speeds. 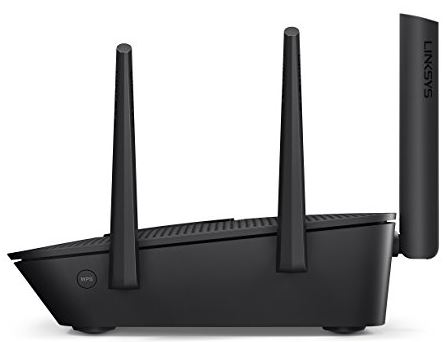 The farther you are from the router, the slower your speeds are. Anyone who’s found themselves in a top floor bedroom with a basement-installed router knows exactly what we’re talking about. Fortunately, the EA9300 has a ton of fantastic technology that drastically improves the range in almost any environment.

First, let’s talk antennas. There are two types on the market: Omnidirectional, and directional. Omnidirectional antennas broadcast a signal evenly in all directions. Directional ones broadcast them in a specific direction. The tolerances can be high or low. For example, consider a satellite dish. A satellite dish can broadcast a signal over hundreds of kilometers. But the tolerances are very tight. If you move a dish only an inch, you’ll completely lose all signal. So this type of antenna would never work for a wireless network.

However, Linksys has a very creative solution for this. They call it beam forming. The antennas surrounding the router are all directional, but between the lot of them they cover a full 360 degree range. Internally, there are nine different amplifiers. These amplifiers will be turned on or off depending on where the users are located. This means that they can focus a beam of WiFi directly at your computer.

This makes the router extremely adaptable. Let’s say that you mount it on the far right side of your house. It will notice that all of the users are connecting to the antenna that focuses the WiFi that direction, and increase the signal to that antenna to improve the range in that direction. The end result is that your speed does not really drop off as you get far from the router. Even on the other end of a 3000 square foot home, we were still getting 683 Mb/s download speeds and 425 Mb/s upload speeds. Considering the distance and obstacles between us and the router, getting these kinds of speeds and a stable connection was incredibly impressive. 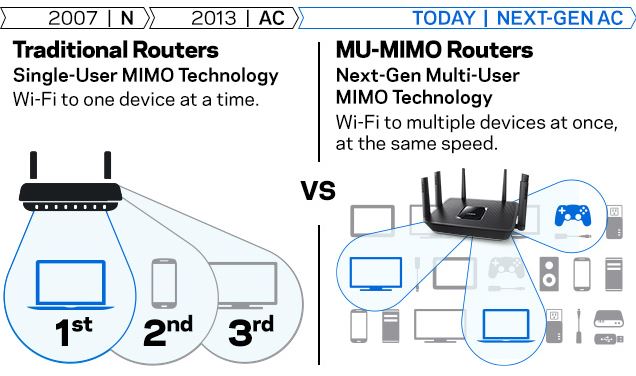 The processing power of a router is not something that most users consider. However, there are situations where this is a very important consideration.

Imagine that you share a house with a few roommates. All of you share an address, so as the mail is delivered it’s your job to look at each individual piece of mail, and hand it to the appropriate roommate. This is exactly the job that the router does. Information is sent to your public IP, and distributed to the local IPs.

Now, imagine you have 100 roommates. Imagine that one of the roommates is running a business from his bedroom, and shipping out hundreds of products every day. All this mail might be challenging to deal with, right? Some of the mail might get lost, or you might be a little slow getting all of the letters where you’re going. This is the situation if you’ve got several high bandwidth users with a lot of open connections on your network. Hosting a gaming server, downloading torrent files, or using certain types of remote desktop software are all examples of tasks that can bog your average router down.

To address this problem, Linksys gave this router a quad core processor. Each core can handle a separate task, so one high volume user won’t slow down the whole network.

These three additional cores, known as offload processors, are like asking your friends to help you with your mail problem. When the mailman drops a stack of new letters for you and you’ve still got to get all the outgoing mail down to the postbox, you can delegate that task to your friend so you don’t get behind. The end result is a router that can handle advanced, demanding applications without even breaking a sweat. 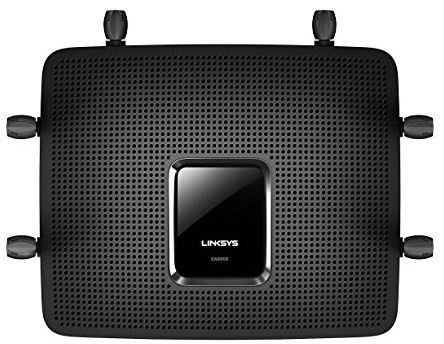 For most users, a router simply works in the background, performing it’s tasks efficiently and silently. But there are a ton of additional features Linksys has thrown in, which may be valuable to some users.

The first feature is a QoS (quality of service) function called “Airtime Fairness.” The router knows that your internet connection has a cap. When the cap is being maxed out, it will scale back some users speeds to ensure a good experience for other users. This means that your roommates intense gaming session won’t impede your ability to check your email.

You can configure a guest network. No password will be required, but you can set restrictions on the guest network such as what types of services they can use, how much time they can be on, and what websites they can access.

A full suite of parental controls are available, as is an advanced networking panel for the techie in your home. You can set up subnets, forward ports, prioritize certain devices, and setup a network attached storage device using one of the three USB 3.0 ports.

All of these features are available thanks to the built in operating system. Linksys provides free firmware updates that enhance and expand these features. If you’re reading this six-months down the road, there is a very good chance that there is additional functionality that was released after the time we write this review. 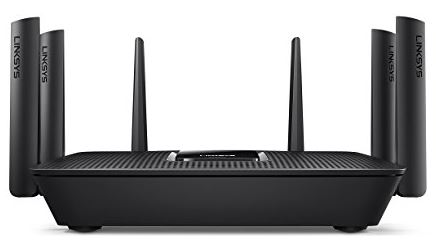 One of the biggest reasons that people upgrade their routers is because it is the bottleneck in their system. Remember, your home network will only be as fast as the slowest component in the loop. So even though this router is capable of server-grade loads, covering a massive range, and transferring huge amounts of data without breaking a sweat, most consumers won’t be able to take full advantage of everything this router has to offer. Unless you’ve got some seriously demanding needs, this won’t necessarily be the best bang for your buck.

It’s pretty clear to us that this is one of the most powerful routers on the market. Yes, there are a few top-tier models that perform a little better. But the difference in speed is minor, and you save quite a bit of money with this model.

With this in mind, our opinion is that the Linksys Max-Stream EA9300 has the best price to performance ratio of any router on the market.

The question is, do you need all of this performance? For many consumers, the answer is no. But if you have multiple high-bandwidth users and need a large area covered, then this could be a great buy.

We’d recommend this router to techies who want to host servers, small businesses who want to set up a high performance wireless network, households that do a lot of local file sharing, or anyone who wants to take full advantage of a fiber optic internet connection.

If you’re upgrading your router because you’ve got a high speed cable package, you might want to consider the Netgear CM1000 as an alternative. If you’re mainly interested in the long range, then something from our list of the Best Whole Home Wireless Networking Systems could be a better choice.