With the advent of 4K displays, our multimedia has been playing catch-up. In just a few short years, 4K UHD Blu Ray players like the Sony UBP-X800 have become common place, and media streaming services like YouTube and Netflix now support 4K content. Whether you’re looking to beef up the quality if your next web conference or produce your own 4K content for YouTube, you’re going to need a camera that is capable of producing images in line with the latest display technologies.

Logitech’s Brivo is the self-proclaimed Tesla of webcams. This is the first 4K webcam to hit the market, and its specifications certainly look impressive. But the real question is if it can hold up to the marketing. We decided to go hands-on to find out. 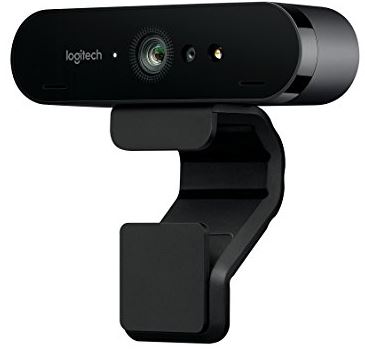 The Logitech Brio is a webcam that clips onto your monitor – a style that is very popular these days. It does so with a long flexible hook. You place the lip on the front of your monitor, and flex the large arm back to install it. Once closed, it holds onto your monitor with a very firm grip. Although it’s a little larger than some webcams, it’s specs justify the additional size. It supports 4K video at 30 frames per second, and has support for the HDR colorspace. It’s built-in infrared sensor and adjustable field of view put it in a class of its own, so we were excited to try it out for ourselves.

When installed, the camera is very minimalist. It’s got a sleek, shiny face that is accented only by the large lens in the center. There is a small decorative ring around the lens that draws your eye in, but remains subtle. If you look carefully, you can see two tiny dots to the right of the lens. This is the infrared LED and the light sensor, which helps to adjust the picture quality for different light conditions. 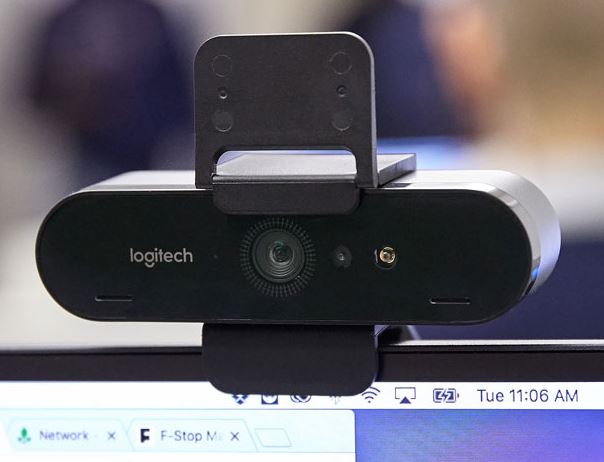 On the left side of the face, you’ll see the stylized Logitech logo. Right next to it is a hidden LED. You can’t see this LED at all when the camera is off, but it’s gently illuminated while the camera is in use.

If you look at the camera from the side, you’ll find that there is a smooth plastic ring around the dark face. It’s almost invisible to from the front, but adds a subtle accent that helps to make the camera feel modern. It looked right at home on our 28” 4K monitor, and the tiny lip didn’t infringe on the tiny bezel that is common with modern monitors. 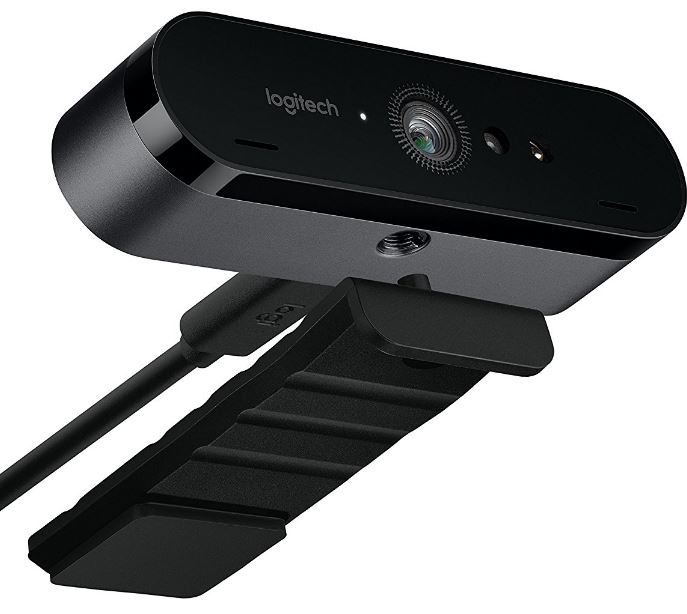 This is the one area where the Brio really blew us away. The level of clarity and detail you get with this monitor is unparalleled. Facial features are incredibly crisp sharp, very different from the typical blurry images you get with standard webcams.

But sharpness and detail is to be expected with a 4K webcam. The Brio also sports impressive performance in various lighting conditions. We’ve all been in scenarios where a lamp behind your head or dim lighting results in a terrible image. Usually, things are either too bright or too dim. Because this camera supports HDR, it can support a wider range of lighting conditions. Things that would be completely white appear sharp and in detail. In some ways, the image almost seems like it’s surreal. You don’t get the sharp contrast and atmosphere you’d get with a cinematic movie. Instead, you just get a bright frame where everything is in detail.

Although HDR is a major step up from standard imaging technology, there are still limitations. Occasionally, something will be blown out. This is where the advanced image processor comes in. It does a great job of identifying the subject of the video (generally your face) and making sure that the image settings are always adjusted for the current conditions. Logitech calls this processor “RightLight 3”.

There is also an infrared sensor, which allows it to pick up details that would otherwise not be visible in the dark. This sensor isn’t a full-blown night vision system, but instead offers a modest boost to low light performance, and adds features suitable for Microsoft’s Hello. 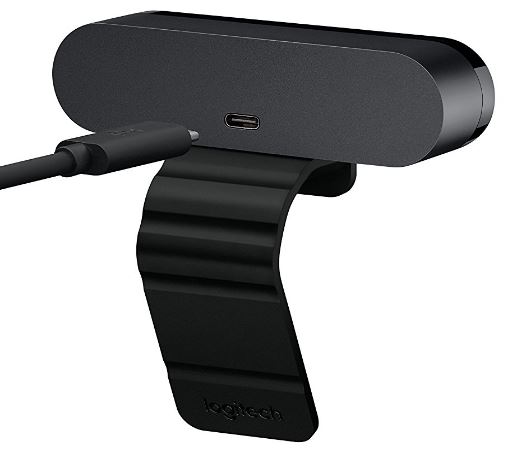 At 4K, you’re restricted to using 30 frames per second. This video is still nice and smooth, more than enough to produce a YouTube video or a skype chat. But if you drop the resolution down a little, you can drastically improve the frame rate. At 1080p, you can hit 60 frames per second. At 720p, you get 90 frames per second. If you’re using a 120hz monitor, there is a definite improvement in the smoothness of the video. This is something we’d use in a video conference or Youtube video is the face is the main focal point. The human eye is very well trained to follow facial movement, and pick up on small movements. For this reason, we found that 60fps video felt more natural.

That being said, if you’re going to be showing something other than your face on the camera, this is where you can trade the frame rate for resolution. This makes the Brio a bit of a jack of all trades. When we were changing settings, we didn’t feel as if we were making compromises. Instead, we were just selecting an option that was better suited for our intended purpose. 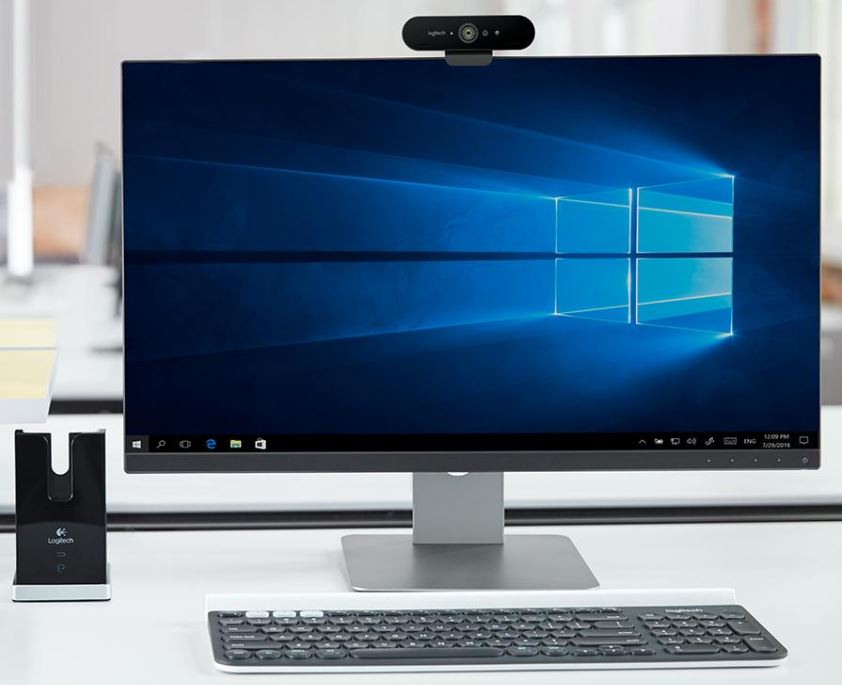 One of the tough parts of selecting a webcam is the field of view. Something that is too zoomed in won’t allow you to show everything you like, while something with a very wide angle lens is less than ideal for video conferencing. The Brio gives you some control over this. You can choose between three options: Wide Angle, Show More, and Talking Head. Wide angle gives you a 90 degree field of vision, and is ideal for streamers who will have props or other things in the frame.

On the opposite end of the spectrum you’ve got the “talking head” option. As the name implies, it’s 65 degree field of vision mostly just shows your head, making it ideal for an environment where you’re trying to replicate a face to face conversation. In the middle, you’ve got the “show more” option. This is a 78 degree field of vision, roughly half way between the two options. 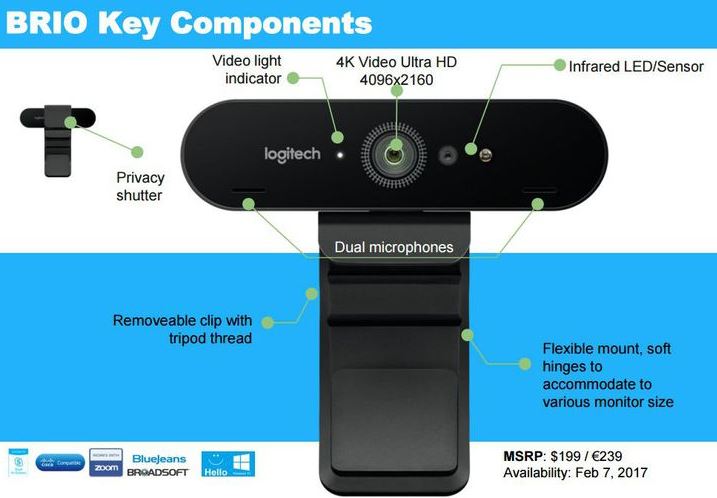 The Brio isn’t just a camera, it’s got several key features that make it more useful. Our personal favorite is support for Microsoft’s Hello. This is the security system used on the Surface Pro. With this camera installed, you’ll be able to forever do away with the windows login screen. After configuring Microsoft’s Hello, the computer goes through a quick process of using the webcam to visually identify you. Most of the time, it took less than a second or two to be dropped straight on the desktop. Because the Brio is such a detailed and clear camera, we found that it recognized us more often, and in varying conditions.

Although we loved the support for HDR imaging, there are very few monitors on the market that can support this increase in the color spectrum. For now, what you’ll notice is slightly more vibrant colors, and improved performance in dark and light conditions. But for now, you’ll have to enjoy your self-made content on something like the LG OLED65E6P, or similar TV.

The Logitech Brio 4K is all about flexibility. If you’re looking to create digital media, hopping on the 4K bandwagon will keep you ahead of the curve. If you’re doing video conferencing, the additional field of vision and advanced imaging technology will make your video clear and professional, akin to what you’d get from a fully featured camera.

One of the nice things about this camera is the fact that you can actually use digital zoom. With a typical 1080p camera, if you use 4x digital zoom you’ll be cutting your resolution in half. But when you use the same level of zoom on a 4k camera, you’re still getting a crystal clear 1080p signal.

We also enjoyed the inclusion of support for Microsoft Hello. Since this program relies on facial recognition, the additional resolution is a huge asset. This is one of the most accurate Hello cameras we’ve come across. The performance in noticeably better than the Surface Pro 4, even in low light conditions.

That being said, this webcam isn’t a replacement for a full-size camera. If you’re looking to take 4K video production to the next level, you might want to consider something like the Panasonic HC-X1. But for casual desk based use, you’ll be more than happy with the Logitech Brio 4K.