What’s the difference between the cheap membrane keyboards you’ll find in a public library, a high end mechanical keyboard? Not unlike the difference between an ordinary car and a sports car, it’s all in the details. How much pressure is required for the actuation of a key? What does the tactile feedback of pressing down feel like? Are there any programmable keys?

If you use a computer, then you’re going to be in physical contact with your keyboard for more time than any other part of your PC. That means it’s important to think about comfort and ergonomics, which is just one of the many ways in which mechanical keyboards excel in ways other keyboards cannot.

But even among good mechanical keyboards, there’s a fairly wide range of quality. Nevertheless, if you’re looking to make the upgrade from membrane to mechanical, or you’re looking to improve over an existing mechanical board, you’ll want to take a close look at Logitech’s recently released G513. 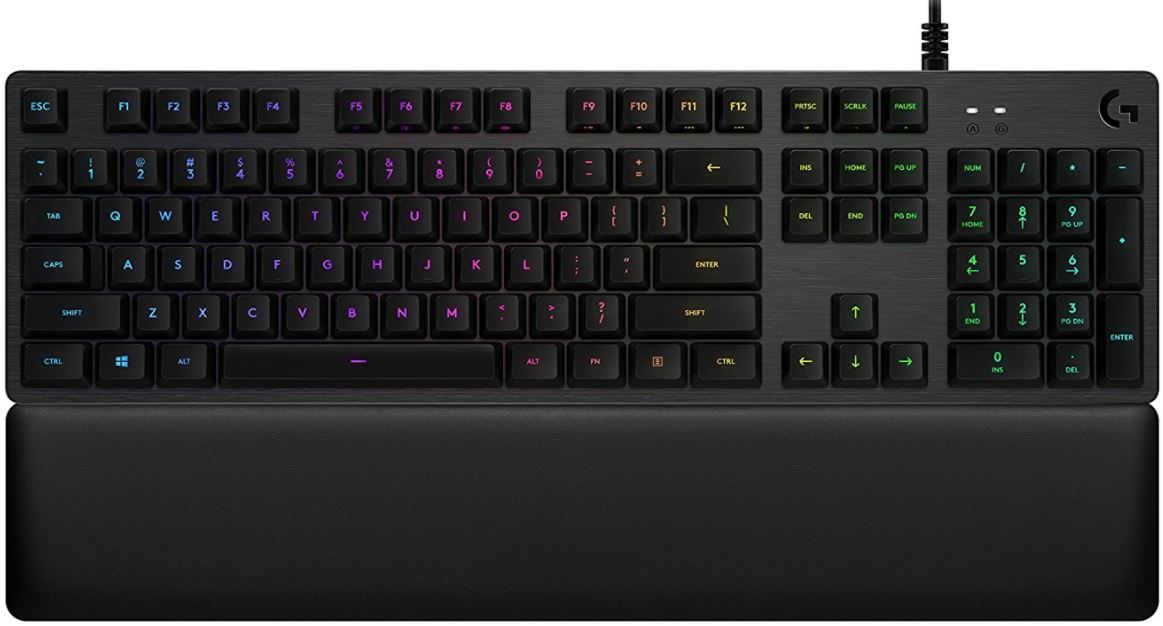 The G513 is basically an updated version of the beloved G413, so anyone familiar with the G413 will immediately notice some of the improvements in the updated version. Essentially all the standard features gamers have come to expect on high-end mechanical boards are included with the G513. And unlike the G413, this board has included customizable RGB lighting, and a stunningly comfortable wrist rest. 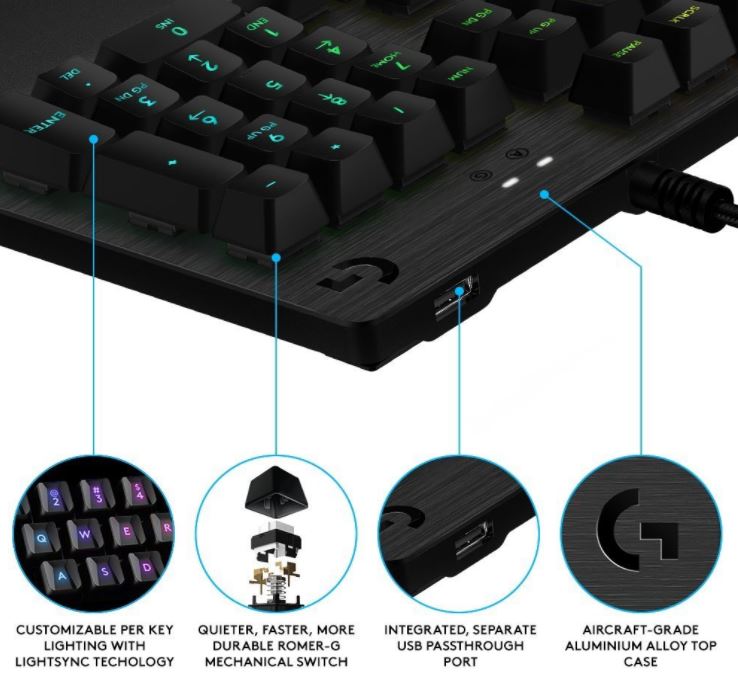 Just by looking at it, you can tell the G513 is well-built. Its casing is made from brushed aluminum, making the board look every bit as sturdy as it is. If you’ve ever used a metallic bodied keyboard before, you know these boards can become a magnet for fingerprints. But Logitech’s brushed aluminum is particularly strong at repelling prints, allowing you to maintain the pleasing aesthetic without much need for extra cleaning. The matte black keycaps are equally matched against finger smudges, and they stand out very well against the dark base of the board.

Although the G513 is a full sized board, it’s not as large as many of Logitech’s past full sized mechanical boards. Prior designs have become well-known for being space hogs, especially Logitech boards that had the edges of their design continue far past their keycaps. But even people with ample space don’t typically want their keyboard to be so large that it can’t fit on a standard keyboard tray.

And fortunately, the G513 is the antithesis of these earlier keyboard designs. It wastes almost no space as the edges of the casing runs close against the keycaps. It also doesn’t extend the board out further than necessary in the interest of adding dedicated macro keys.

The wrist rest is another feature that was absent in the G413, and is one of the things that make this new design a drastic improvement in ergonomics. The pad itself is a faux leather surface that’s stuffed with memory foam. The resulting effect is like having a pillow to rest your palms on, easily making this board one of the most comfortable on the market.

Another detail to notice is the attachment of the pad, or lack thereof. Wrist pads are often useful, but there are plenty of circumstances where you might not want or need them. You may be standing at your desk, so the angle of your wrist won’t benefit from the pad. You may not want to give up the desk space to add the pad, or you may large hand that are too big to use it. Whatever the case, it’s good for a keyboard rest pad to be removable.

The G513 uses a fully detached rest. The non-slip rubber feet on the bottom of the G513’s wrist pad generally keeps it in place while you’re typing, but sadly doesn’t totally eliminate the risk of your pad eventually being bumped out of place. Although that can be a minor irritant each time it happens, the comfort of the pad will keep you using it. The fact the pad is removable is great, but the design might be improved if it could be clipped on to the board directly.

One of the things that added bulk to earlier Logitech keyboards was the addition of extra buttons, especially programmable macro keys and dedicated media control buttons. On one hand, macro keys are great for certain gaming niches. On the other hand, many people never get around to actually using them. The G513 tries to offer the best of both worlds. Although there are no dedicated media buttons, you can find most of types of controls tucked away as function key commands. That means they can be accessed by pressing the function button along with one of the F1-F12 keys.

Likewise, there are no dedicated macro keys that you can program, but Logitech’s software allows you to reprogram existing keys to your liking. Although there’s no dedicated keys, the G513 strikes a fair balance between having no macro keys, and having to deal with a larger board.

Another of the more obvious improvements over the G413 is the addition of RGB backlighting. Logitech was one of only a handful of major brands to resist adding RGB lighting to their keyboards. But with the widespread popularity of LED peripherals, Logitech has finally leapt on board the LED bandwagon with their G513.

Even though Logitech is new to lighting boards, they’ve clearly been studying the competition. The G513 uses floating keycaps, allowing the lighting to come through each individual keycap rather than from under the keys. That helps ensure each key lights up brightly and evenly for the best lighting aesthetic. To control those lights, you can use the function key commands on the keyboard. With the right hotkeys, you’ll be able to adjust their brightness, and toggle on and off various lighting effects. 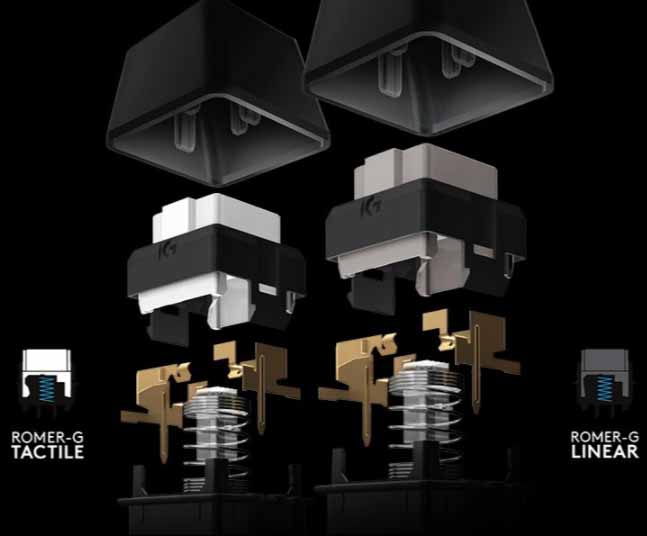 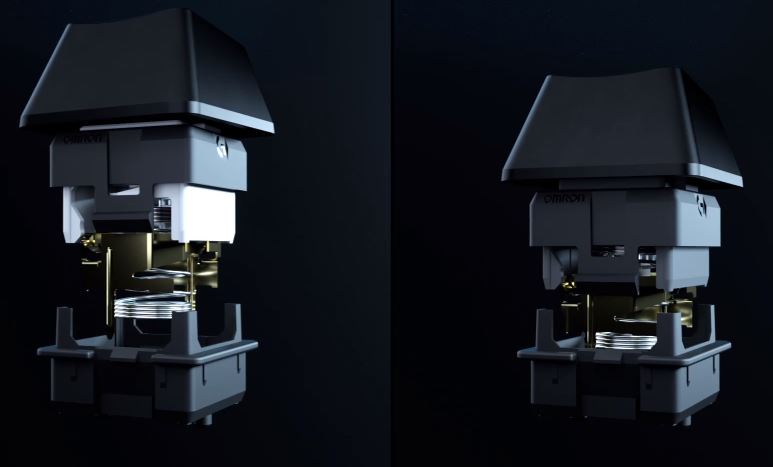 But recently, Logitech has decided to start using their own line of switches, the Romer-G. And they’re available in two forms: tactile and linear. Logitech’s linear switches are comparable to Cherry MX Red switches. There’s a smooth keystroke, and quite a bit of mechanical clatter as your fingers hit the keys. By contrast, the tactile switches are comparable to Cherry MX Brown switches. They give you a clear tactile feedback in response to hitting each key, and they’re not quite as loud as linear switches.

As far as performance goes, it’s fair to say Romer-G switches match or beat Cherry MX switches. But all you really need to know is that there’s a smooth actuation that feels good to use. If you’re not sure which type of switch to pick, the linear switches are especially good for gaming, and the tactile switches are oriented more towards typing.

The Feel of the Board

Gamers trust Cherry MX switches because of their smooth and fast actuation. Romer-G switches use 1.5 mm of space for actuation, ensuring they react to a keystroke long before you’ve bottomed out the key. And on the G513, key presses register well even with unwieldy motions on the board. The keycaps are made with a soft-touch finish that keeps the caps clean and smoothly comfortable to the touch.

Spacing between the keys is fairly standard for a Logitech board, ensuring that typing feels natural. The caps themselves are designed to float on the board, but still feel solid when you put your fingers on them. You won’t find wiggling keys that feel cheap, and when you’re striking one side of a larger keycap, you won’t find the other side wobbles unevenly. 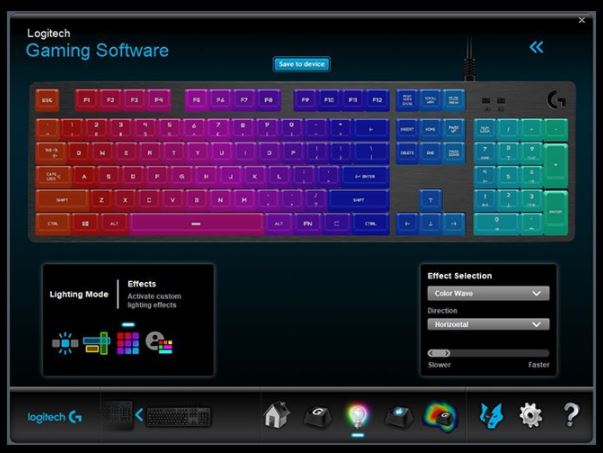 One of the things that distinguishes Logitech from other brands is their formidable software support. The G513 takes full advantage of Logitech’s gaming software. The latest upgrade to their ongoing support includes the ability to LIGHTSYNC your lighting along with other compatible devices. That means you’ll be able to change the RGB color of your keyboard in-sync with screen color changes or in-game action.

And inside that software you’ll find per-key customization for each light, enabling a nearly unlimited amount of aesthetic customization. You’ll also find light effect presets, like breathing, color wave, and ocean animation effects. You can program your own animations as well, either by copying from the Internet or slowly building your own from scratch. That detailed level of customization is compelling by itself, but paired with ongoing software support, Logitech provides you with more than a few reasons to avoid choosing generic brands.

The G513 comes with replacement keycaps for the handful of keys that gamers pound the most. That includes the Q, E, W, A, S, and D-keys. You also get extras for numerical keys one through five. While the normal keycaps have a gentle recess that ensures each keycap doesn’t feel flat, the included alternative keycaps are made with a much deeper recess. This cradling effect is useful when you find your fingers continuously pushing against these keys, in other words it’s for gamers. 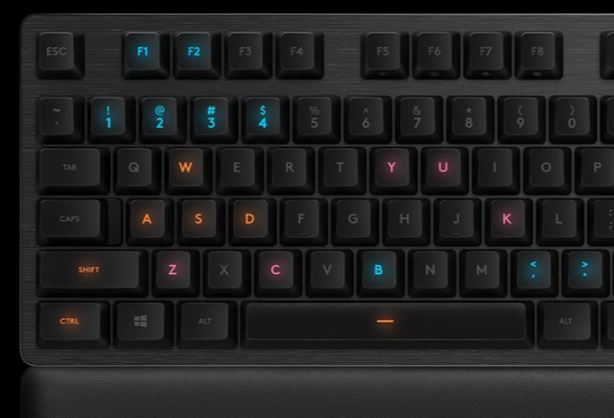 Who Should Choose the Logitech G513?

The Logitech G513 is somewhere above mid-range mechanical keyboards, but below the highest end mechanical boards. It’s full sized without being excessively large. Its metal construction provides the durability of a tank, and the lighting customization provides an aesthetic that makes similar boards look poor in comparison. As if that wasn’t enough, the wrist pad by itself could make this board stand out.

People who want dedicated macro keys will have to look elsewhere. And if you’re looking for a cheap entry-level mechanical keyboard, this isn’t it. The G513 is on the higher end of quality when it comes to mechanical keyboards, and that’s reflected in the price. But if quality is what you want, the G513 can deliver. Without doubling your budget, it’s inarguably the best mechanical keyboard on the market at this price point.