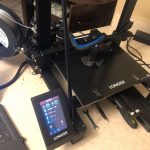 Until not too long ago, 3D printing seemed like a fantasy. Turn on an episode of Star Trek from the 1990s, and people get whatever they want from replicators. Now, we’re not quite to that point yet. You can’t 3D print food, for example – at least not at home. But you can print some impressive plastic creations that people could only dream of a few years ago. Why is this beneficial?

Take the example of a simple plastic prototype. You want to make a model of some kind. This can be as complex as an engineering design, or something as simple as a toy. In the past, you’d need to make a sculpture by hand, then use that sculpture to create a mold. You’d then create your plastic model using an injection-molding process. This was time-consuming, expensive, and a pain to repeat if you needed to.

With a 3D printer, you create your prototype in a CAD program. Then, your printer lays down the printing material according to that design. The nice thing is that this is all automatic. You set everything up, you hit “print,” and you can work on something else while the magic happens. Now, this obviously isn’t the best choice for mass-production. But it makes prototyping far easier. It’s also great for hobbyists and fabricators. If you want to make tabletop gaming pieces or custom model airplanes, you can.

We’re about to review the Longer LK5 PRO FDM 3D Printer. This is an FDM printer, which means it lays down plastic and polymer from spools that feed into the machine. It has a large frame, with a big printing area so you can work on oversized projects. It’s also compatible with a variety of printing materials, and has a relatively fast print speed. But does this mean it’s the right 3D printer for you? To find out, we’re going to have to take a closer look. We’ll dig into how it’s set up, and how you use it. We’ll also take a look at the quality of the results you can expect to get. After that, we’ll be ready to render our verdict. Let’s dig in, and see what we uncover! 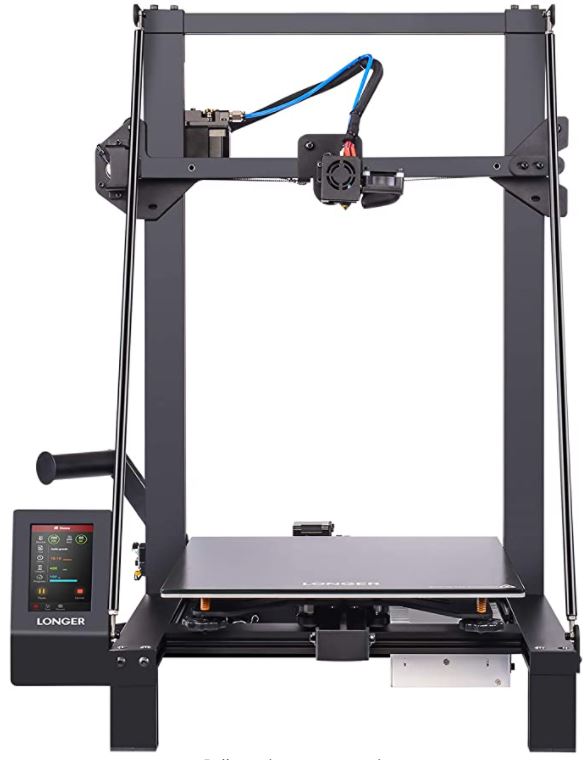 The Longer LK5 PRO is a big, beefy printer with a large footprint. It measures 22.8 inches in width and 21.3 in depth, with a frame that stands 26 inches high. As a result, it takes up a fair amount of space. Not only that, but it weighs nearly 30 pounds, so it’s also a bit heavy. Think of this as a workbench-sized printer as opposed to a desktop printer. As a result, it’s perfect for larger projects. At the same time, you may want a printer with a smaller footprint. In that case, check out the Kodak Portrait 3D Printer. It’s small enough for a normal desk, with a protected, enclosed printing platform. That said, it doesn’t have the same ability to print large objects as the LK5 PRO. 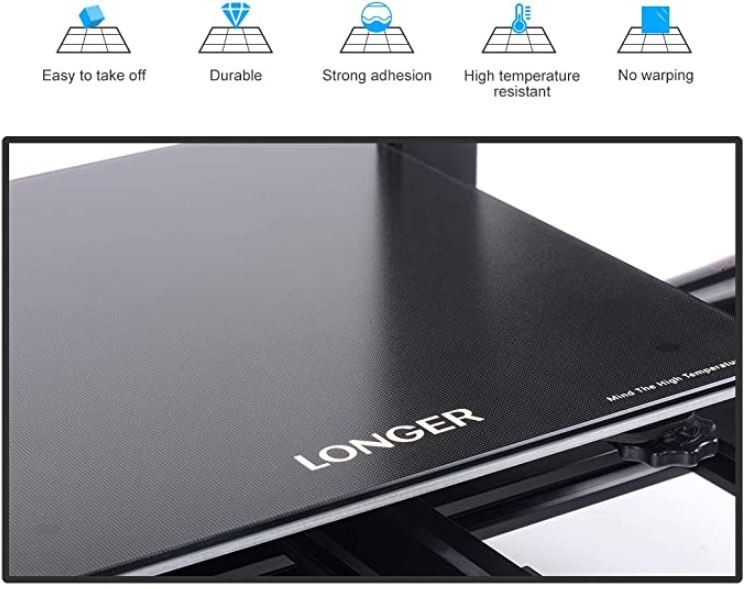 The printer’s base is a ceramic-coated glass platform, which rests on a motorized mount on a horizontal track. This ceramic-coated glass is designed to prevent your creations from sticking, so they’ll peel off easily. The track is suspended between two large, long, horizontal frame pieces which sit parallel on either side. There are feet at all four corners, and a vertical gantry that overarches the platform. The sides of the gantry are tracked, with a crossbar that can ride freely up and down. On the side of this crossbar, you’ll find the motor and printer head, which ride back and forth along it. As a result, you have free movement along all three axes

This is the most common design for a home 3D printer, and it’s called a cartesian design. The bed rides back and forth along the Y axis. Meanwhile the motors move the print head along the Z and X axes. This provides better control than a printer where the print head moves along all three axes. It’s more stable, which means it produces more reliable results. 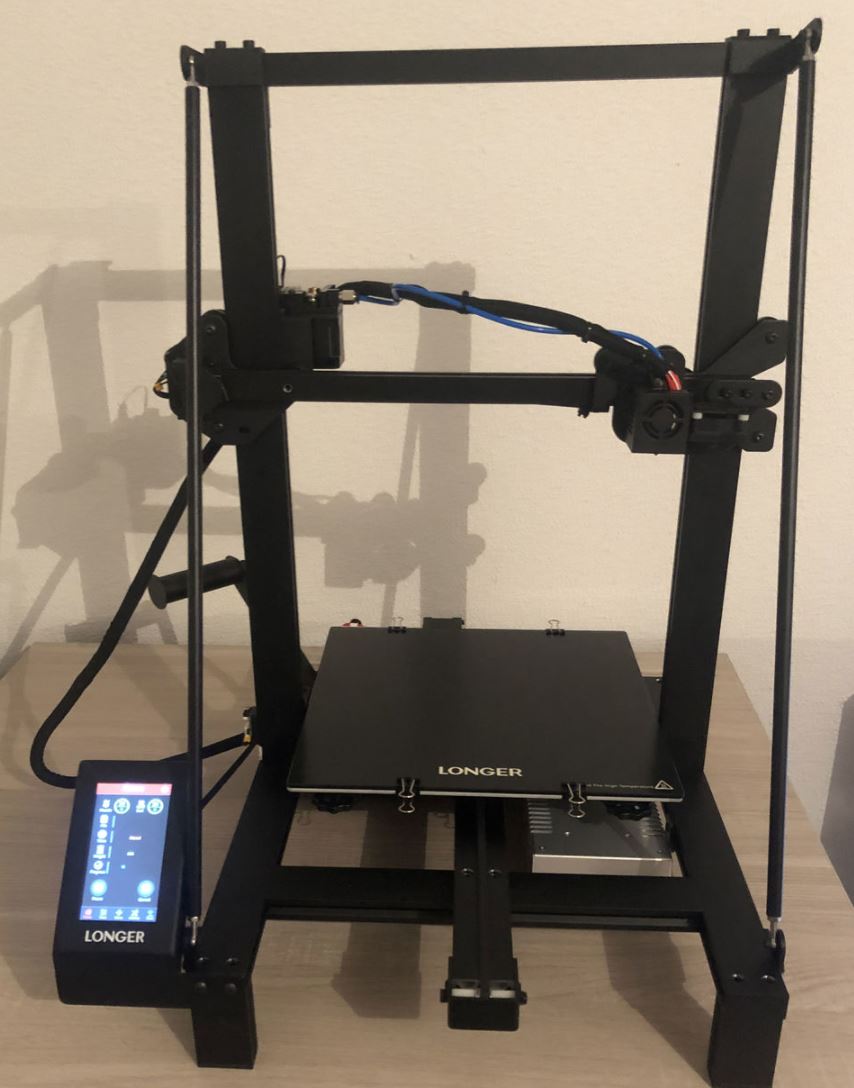 Longer advertises the LK5 PRO as “90% pre-assembled,” and that’s technically correct. At least, in the sense that the motor and other components don’t arrive in pieces. That said, the frame and gimbal need to be assembled over the top. This includes installing a set of inclined rods that support the gimbal from one side. You’ll also need to properly align the print extruder bar and arms. They need to be screwed together, and they need to be screwed together in the right order for proper alignment. 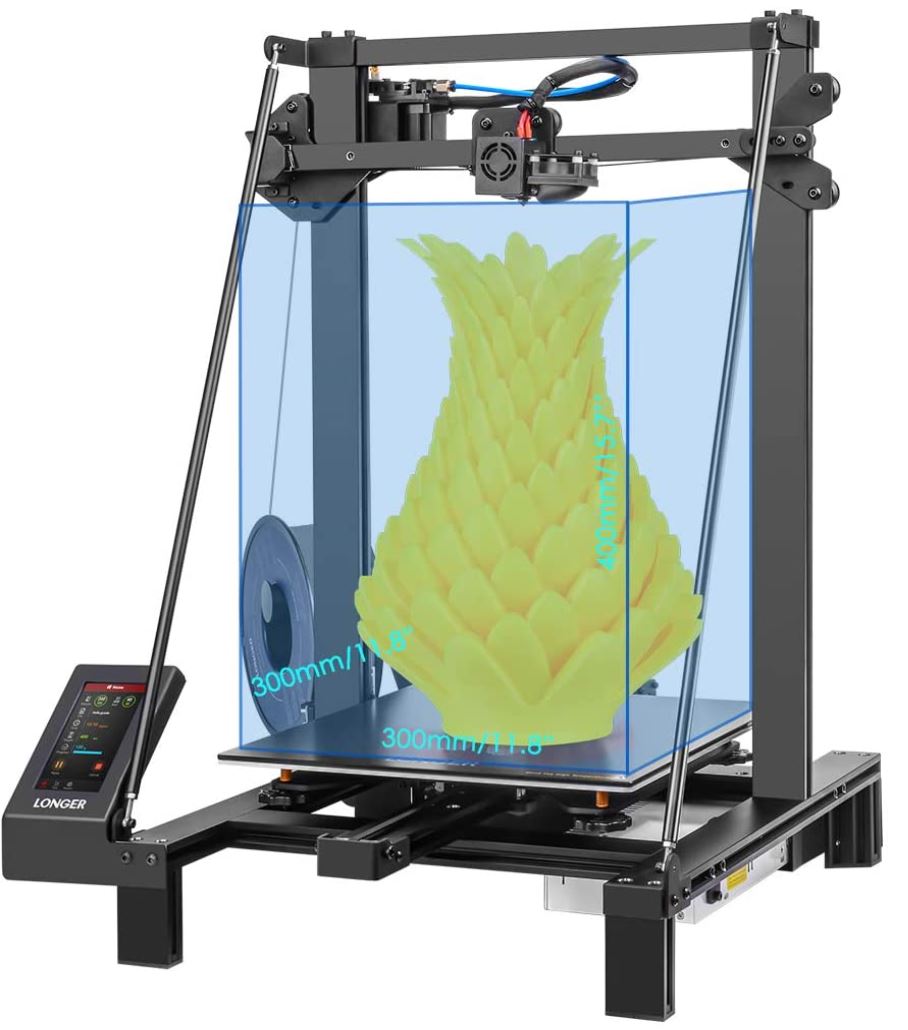 Not only that, but you’ll need to run the wiring harness and plug all the components together. It’s nothing you can’t handle if you’ve ever built your own PC. But if you’re not comfortable with assembling electronics, you may not want to use this printer.

On the left side of the frame, you’ll notice a small assembly with a colorful touchscreen display. This provides you with tons of useful information on the printer and on your job status. It also allows you to control printing from SD cards, calibrate the printer, and perform other functions.

Compatibility and Ease of Use

As far as compatibility goes, the KL5 PRO is about as widely-compatible as they come. The firmware is open source, so you’re free to make your own modifications. There’s actually an active community of people creating their own mods and customizations. You can get it set up with Windows or Mac in just a few minutes, and it works with most popular CAD software. Not only that, but the open source design makes it well-suited for aftermarket add-ons. Longer even makes their own, the BLTouch, which provides automatic leveling. 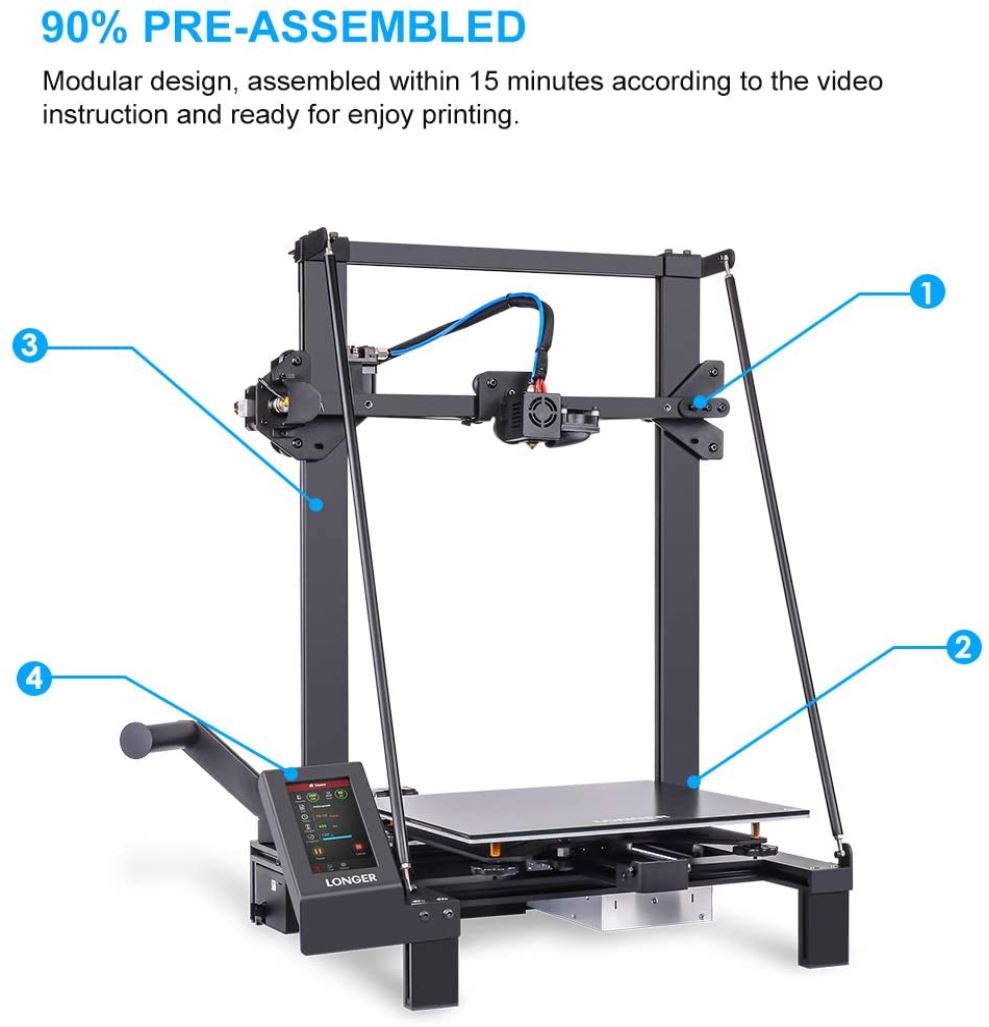 This is actually a bigger deal than it sounds like. Out of the box, this printer needs to be manually adjusted. If you’ve never had to calibrate a 3D printer before, trust us, it’s a headache. Even the slightest variance in the angle of the base or the motorized track can throw off your design. At best, this means you’re not getting the result you wanted. At worst, rows of material won’t line up at all, and your creation will fall apart. Either way, you’ll have to start over. So auto-leveling is a very useful feature to have. 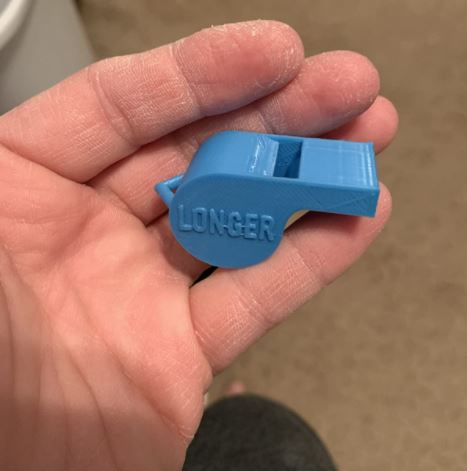 The printing area itself measures 11.8 inches wide, 11.8 inches deep, and 9.8 inches high. That’s 300 x 300 x 400mm. That’s a larger printing area than most home 3D printers, and provides more opportunity. For example, you can use this printer to create bottles and other larger objects that won’t fit on other printers. You can even create sections for larger models.

The nozzle diameter is 0.4mm, which equates to the size of a thread of the material you lay down. As a result, you’re not going to be printing any super-detailed tiny models with this printer. Instead, it’s better for prototyping, or for printing larger objects. It’s well suited for that purpose, with a maximum print speed of 180mm per second. That said, you won’t get the best quality at maximum speed. To get the most out of the LK5 PRO, it’s best to keep the speed to 80mm per second or slower. Then again, you can always use the highest speeds for rough drafts. 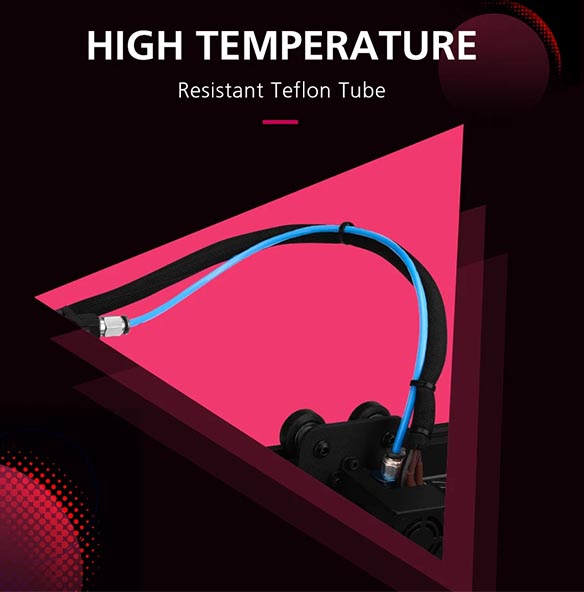 The printer is easy to connect, and requires only a USB connection. Once it’s plugged into your computer, you can download the drivers directly from Longer’s website. Alternatively, you can print from a Micro SD card, which is included in the package. This makes it easy to bring in a design from off-site.

If the LK5 PRO’s customizable nature appeals to you, you may like the Snapmaker 2.0. It’s a modular printer with dozens of options available. It also has a large number of community-generated firmware options and other helpful features. Then again, it’s not quite as big as the Longer printer. 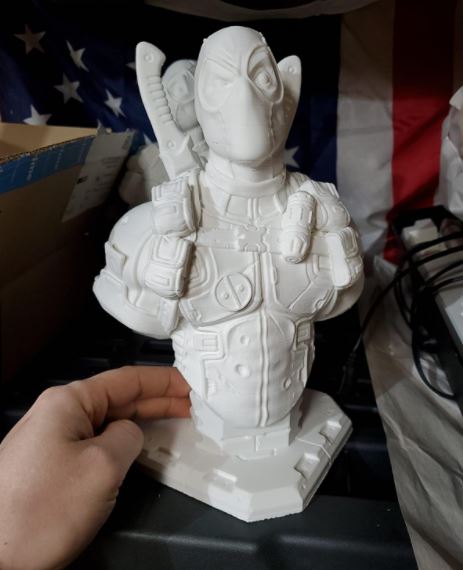 The LK5 PRO is a Fused Deposition Modeling (FDM) printer. The way this type of printer works is by feeding material through in the form of a filament, or thread. This thread runs through a tube and into a heated print head, where it’s melted and extruded. The idea is to create a smooth, consistent flow of material, and avoid the use of messy pellets. That said, while the flow is steady, the individual threads tend to be relatively thick. As a result, FDM creations usually require a bit of finishing after the fact. In the case of this printer, the feeding tube is made from temperature-resistant Teflon, further smoothing the flow. 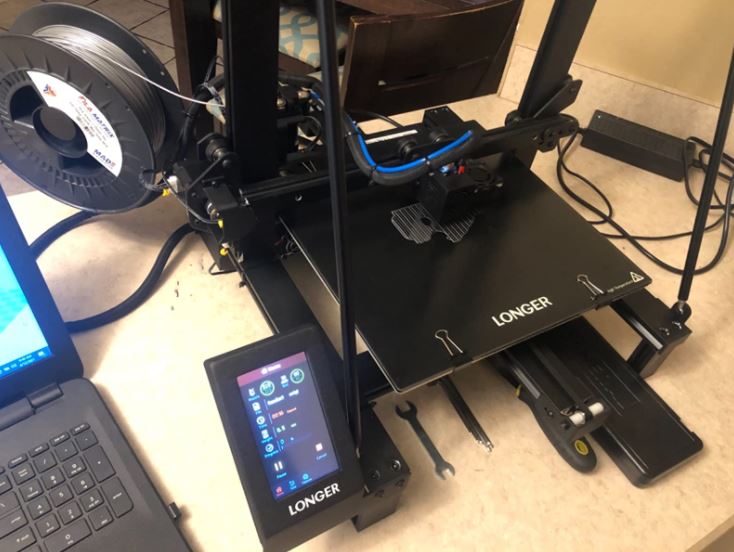 So, what is the thread itself made out of? There are a wide variety of materials available, including options like wood-based material. But the most common materials are plastics, such as ABS, PLA, and PETG. Here’s a quick look at each:

ABS is short for Acrylonitrile Butadiene Styrene. It’s a rugged plastic that’s used in many applications where light weight and durability are essential. Video game controllers, for example, are made of ABS, as are most other small plastic electronics. ABS is also weather-resistant enough to stand up to outdoor use.

PLA is short for Polylactic Acid. This is a plant-based plastic that’s designed to be environmentally friendly. It breaks down in the sun, so it won’t create permanent waste. That said, it’s a poor choice for long-term outdoor use.

PETG is short for Polyethylene Terephthalate Glycol. This plastic is food-safe, so you can use it for bottles and other food-contact items. That said, layers of material can leave tiny bubbles and gaps where bacteria can grow. Before you use your bottle, make sure to finish it off with food-grade epoxy. 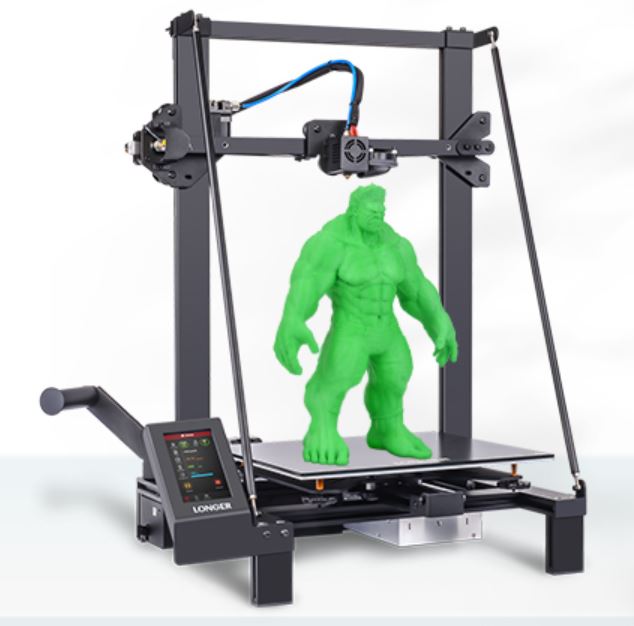 The Longer LK5 PRO FDM 3D Printer is one of the better-engineered 3D printers on today’s market. It’s not for everybody. The setup takes some work, and the accuracy isn’t as high as some more expensive printers. But for hobbyists and anyone who wants to make prototypes, it’s a solid choice. It’s compatible with most printing materials, and it’s easy to print to.