Most of us remember past years of standard definition TV, VHS tapes, and even fiddling with “rabbit ear” antennas in an often-futile attempt to reduce the static on one of the few channels that actually came in. The evolution through DVD, High Definition digital cable, Blu-Ray, and large format LCD TVs was astounding. In one generation, we advanced from squinting at small, bulky CRT screens to the near-perfect clarity of enormous flat screens mounted on walls.

With increasing screen sizes and declining prices, high definition LCD TVs work just fine for most consumers. However, as time has passed, HD is old news. 4K is the new high bar, and while not much content exists yet, it won’t be long before it takes over.

Plus, if you’re looking to recreate the scale and quality of a movie theater experience at home, you know that a “meager” 60 or 70-inch TV screen just won’t cut it. While a projector certainly doesn’t make sense for every living room, if you have the right space, a quality home theater projector can create a jaw-dropping media experience without ever having to change out of your pajamas.

At CEDIA 2017 in San Diego, California, Optoma revealed their new UHZ65 projector. While sharing the same 4K resolution as their UHD65, the UHZ65 takes technology a step further by utilizing a laser phosphor light source instead of the traditional projector lamp.

Most technology companies tend to create products in a number of different area. This helps diversify their offerings against shifting interests and competitors. In some ways, it’s nice to see a company like Optoma that knows exactly what they’re all about. While they do have a subsidiary that produces some audio equipment, they primarily do one thing: projectors.

Optoma has a full lineup of projectors for all uses from tiny, portable ultra-mobile models through premium professional units used for live concerts and stage shows. Optoma’s expertise shows in the quality of their product line from top to bottom.

The UHZ65 is a high-end home theater projector part of an increasing number of projectors from Optoma and other manufacturers that support 4K resolution. While stunning up close, 4K often can’t be distinguished between standard HD when you sit at a normal TV viewing distance. Even a large 75-inch TV requires a viewing distance of less than 6 feet for your eyes to appreciate the improved clarity. 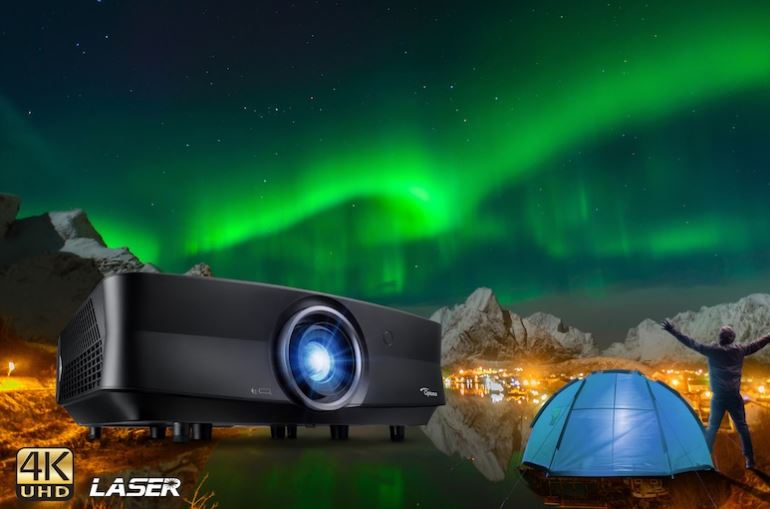 With support for image sizes between 26 inches and 302 inches, the Optoma UHZ65 create a remarkable image regardless of the size of your space. Supporting front, rear, ceiling mount, or table top projection, the UHZ65 brings tremendous quality in a relatively small, versatile package.

While not technically classified as portable, the Optoma UHZ65 measures 19 x 13 x 6 inches and weighs in at 20.5 pounds. You can’t necessarily slip it into your briefcase for a business presentation, but it is small enough to move if you decided to have the occasional backyard movie night.

Throw ratio indicates the width of the resultant image depending on the distance you place the projector from the screen. Keep in mind this measures width whereas typical screen size indicates image diagonal length.

The UHZ65 has a 1.6x optical zoom lens with manual focus resulting in a throw ratio between 1.39 and 2.22, plus or minus 5%. This means in order to achieve a 100-inch image, you must place the projector between 10 and 16 feet from the screen. Optoma’s website includes a detailed tool to assist in calculating screen size and distance.

Ports include a standard HDMI 1.4a port as well as an upgraded HDMI 2.0 with HDCP 2.2, MHL 2.1, and full 18 gigabit per second compatibility. Full 4K video at 60 frames per second requires this newer HDMI 2.0 standard. For anyone not utilizing the superior audio and video quality of HDMI, Optoma also adds VGA input, 3.5 mm audio input and output, and built-in 4-watt stereo speakers. USB, RJ45, and RS232C ports are included for service and connectivity to home controls.

The UHZ65 is rated for operation between 41 and 95 degrees Fahrenheit which should cover even the widest range of indoor temperatures.

The Optoma UHZ65 utilizes Texas Instruments’ relatively new 4K UHD DLP chip. If you’re not familiar with DLP technology, it’s truly fascinating. DLP, or Digital Light Processing, involves shining a light source onto a small chip covered in microscopic pivoting mirrors. These mirrors are precisely timed to shine the correct amount of light through a rapidly spinning color wheel. This all happens so quickly that our eyes blend everything together and we see a single unified image. It’s astounding that mirrors so tiny can mechanically move that quickly and with such precision. 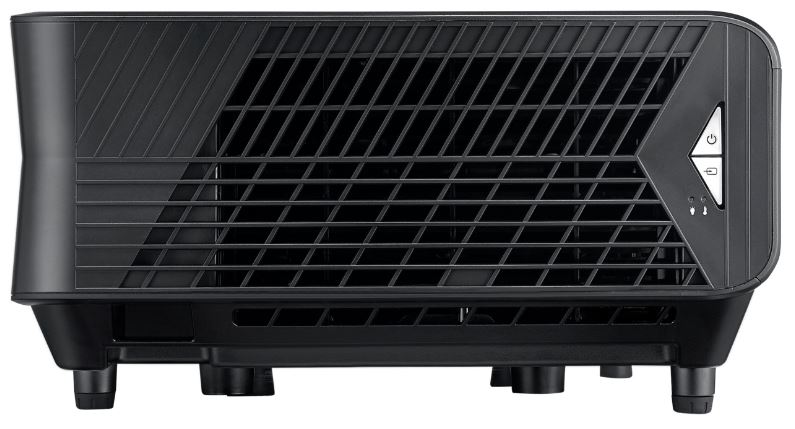 Optoma’s TI S610 DLP chip innovates even further to achieve 4K resolution. Full 4K, 3840 x 2160, requires about 8.3 million pixels. The TI chip manages to stuff 4.15 million mirrors onto a tiny chip less than 1 inch square. While this is only half the pixels required, TI developed advanced image processing software to slightly shift the projection twice per video frame providing the complete 8.3 million. Once you understand what’s happening under the hood, it’s really remarkable that it works at all.

Traditionally, the light source in home theater projectors came from a bright lamp. It was effective, but lamp replacements could cost hundreds of dollars, a steep price to pay for a projector a few years old. Optoma improves on this lamp technology by utilizing a “laser phosphor” light source.

Unlike the pure white light from a lamp, laser phosphor uses blue laser diodes for the source light. By adding a phosphor wheel which produces yellow light when excited by the laser, and a final color wheel, the traditional red, green, and blue light can all be projected on screen.

The final image has increased brightness and contrast levels compared to traditional lamps while requiring virtually no maintenance or replacement. Lamps may require replacement after a few thousand hours of maximum brightness, whereas the UHZ65’s laser phosphor source is rated to provide 20,000 hours, or nearly 7 years of operation even at 8 hours per day. 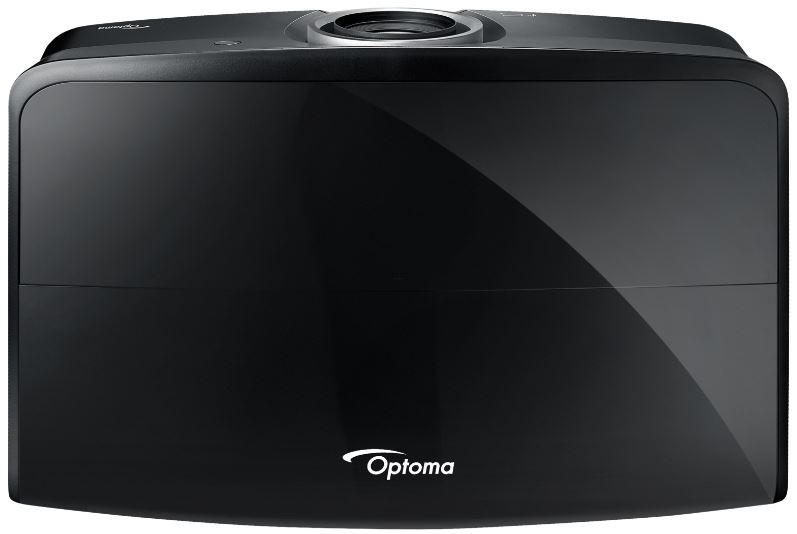 All the technology in the world doesn’t mean a thing if it can’t deliver. Fortunately, the Optoma UHZ65 delivers in a big way.

As mentioned, 4K clarity is simply breathtaking. You’d be hard pressed to notice any pixilation without a magnifying glass. However, Optoma knows that there’s more to a great picture than just resolution. Enhanced by the laser phosphor light source, the UHZ65 delivers 3000 lumens of brightness and Dynamic Black technology can provide a 2,000,000:1 contrast ratio for exceptional black levels.

One newer specification to watch, the UHZ65 is HDR compatible. High dynamic range refers to a picture or video with the ability to display a wide range of brightness levels. This allows scenes of mixed brightness to display details in all areas without blowing out bright areas or blacking out dark ones. 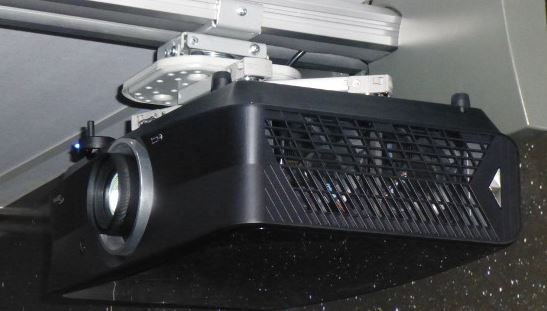 The HDR10 standard also utilizes what is called ITU-R Recommendation BT.2020, or Rec. 2020. This standard, aside from being an absolute disaster to explain to consumers, defines resolutions of either 4K or 8K, particular progressive scan frame rates, and a minimum required level of color bit depths and color space. Based on scientific understanding of the complete spectrum of color distinguishable by the human eye, the older HDTV Rec. 709 only covers 35.9% of color whereas Rec. 2020 includes 75.8%.

While it’s easy to get buried in technical specifications, at the end of the day, the Optoma UHZ65’s support for Rec. 2020 means it should deliver a more lifelike spectrum of color.
Finally, Optoma’s PureMotion technology intelligently processes video to eliminate noise, motion blur, and shaking particularly noticeable during fast motion video. 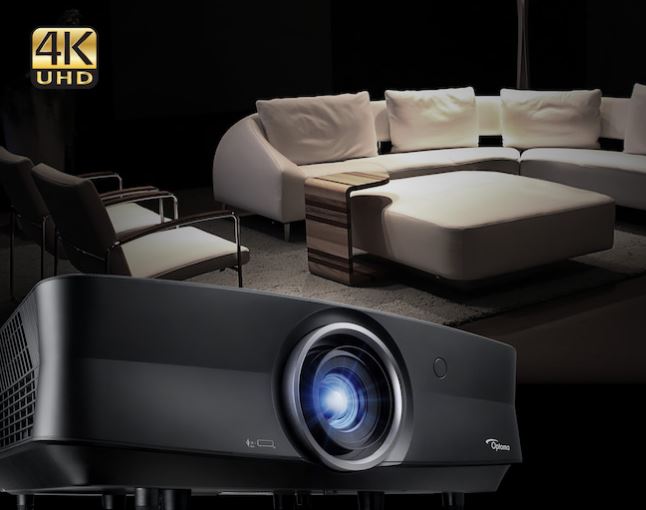 One aspect of the UHZ65 did surprise us. We decided to compare the specifications to the Optoma UHD65. These two projectors are very simialr. Both feature the same 4K DLP technology, the only difference is the UHZ65’s addition of the laser phosphor light source versus the UHD65’s traditional HID lamp.

We expected that the traditional lamp was responsible for a significant power draw. In electronics, additional power means additional heat and heat generally must be cooled with noisy fans.
As a result, we hypothesized that the UHZ65 would draw less energy, produce less heat, and therefore run quieter than it’s less sophisticated sibling. In reality, the opposite proved true.
The UHD65 draws an average of 317 watts in Bright mode and 259 watts in Eco mode. Noise levels are a respective 28 and 25 decibels. The laser phosphor UHZ65 draws 400 watts in Bright Mode and 240 in Eco mode while humming at 33 and 29 decibels respectively.

Granted, both are relatively quiet and it isn’t a tremendous difference, but it was unexpected. Given the UHZ65’s increased brightness, it’s a worthy trade. Both draw quite a bit more power than a modern LED TV, many of which pull fewer than 100 watts during operation. While I don’t you’ll be terrible concerned about a bit of an increase to the electric bill if you’re spending thousand on a home theater projector, it’s worth noting if you plan to use the projector extensively. 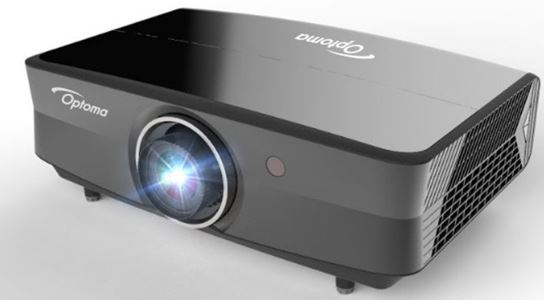 Optoma’s UHZ65 delivers an astounding picture. We were blown away by the incredibly 4K clarity and HDR color. While some argue you can’t distinguish 4K quality when you’re sitting across the room, projecting an enormous 100 plus inch image certainly helps you see the difference.

While 3000 lumens makes for a clear, bright picture, ambient light still remains the enemy of any projector. Optoma recommends limiting projection to 140 inches to maintain the best picture, but you can push this in dark environments. If you’re looking to use in a sunny room, you’ll most likely need a standard TV for daytime and a retractable screen for evening viewing.

Laser phosphor technology eliminates consumable lamps as one of the main drawbacks to previous projectors. While still new and expensive, it’s still the first generation. This tech shows great promise in improving reliability while also creating a better and brighter picture. We anticipate seeing many more laser phosphor projectors in the future.

The UHZ65 does represent a fairly high-end home unit. It’s full of new technology and priced accordingly. While you won’t find it sitting in every living room across the country, if you have the right space and budget, you’d never need to go to a movie theater again.