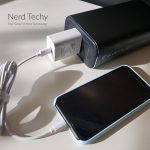 Smartphones and tablets have changed our lives in ways we would never have dreamed possible just a few years back. Nowadays, we rely on them every day, both for business and for pleasure. For instance, you might use your tablet to take notes at a meeting, then use the same tablet for Netflix. Smartphones, meanwhile, are used for everything from online banking to games to social media. These developments have made us more connected than ever before. Even if you live across the world from friends or family, you can stay in touch every day.

Of course, all of this connectivity isn’t free. It requires a constant supply of electricity. When your phone or tablet is on the charger, you can’t carry it around with you. Your tablet may as well be a desktop computer, and your phone may as well be a landline. At least temporarily. That’s why it’s important to have a good charger. The faster your charger, the less time your devices will be tethered to an outlet.

This leads to another problem. There are many choices on the market, and not all of them perform equally well! If you’re not careful, you could end up with a dud. But by sticking to brands you know and trust, you can avoid a lot of those experiences. Quntis is one of those trusted brands. We’ve reviewed their computer monitor lamp in the past, and it performed very well. Now, we’ll take a look at two of their chargers: the 18w and 30w fast chargers. Read on to find out which one is best for you!

USB should be familiar to anybody who hasn’t just come out of a 20-year coma. However, PD power is a relatively new development, and not everybody’s up to date on what it offers. PD is a type of USB technology, which is designed to deliver more power than older versions of USB. If you’re used to everything running on USB power, this may be surprising. But when USB was first introduced, it wasn’t designed for power; it was designed as a universal data transfer format.

Early versions of USB could deliver a small trickle charge, and manufacturers took advantage. USB 2.0 and USB 3.0 improved the amount of current as well as the rate of data transfer. USB 3.0, for instance, can deliver up to 18 watts without any upgrades. For smaller devices, that’s plenty. With an 18-watt charge, you can talk on a smartphone even as it’s charging. That said, more powerful devices, like tablets, require more power than a smartphone. For tablets and laptops, more wattage is required. 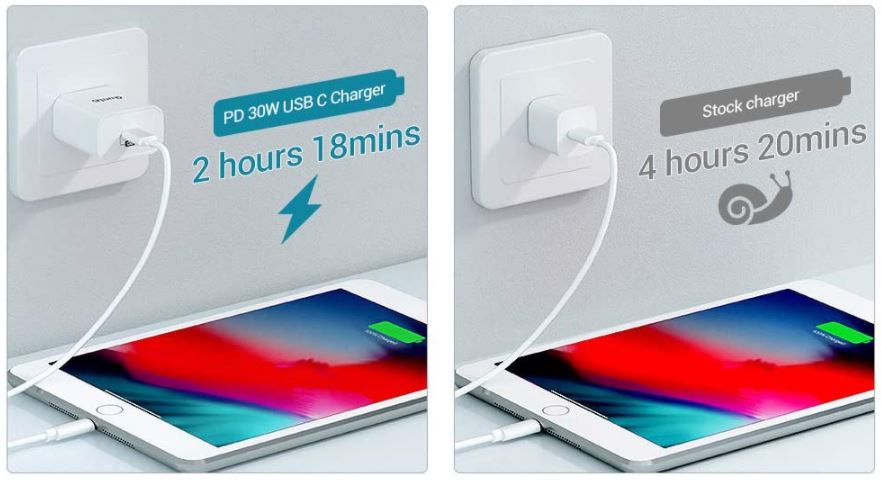 USB Power Delivery (PD) was first introduced in 2012. However, it was not significantly more powerful than USB 3.0 until 2018. That year, the USB Promoters Group released a 100-watt PD standard, and it’s taken the market by storm. You’ll find USB PD ports on many modern computers, including the latest MacBooks. Even the Nintendo Switch uses a USB PD charger.

Now, most PD ports are designed to work with USB Type-C. They’re so tied into the USB Type-C standard that they’ll even work with non-PD-capable Type-C cables. They just won’t deliver more than 18 watts over that type of cable. To get more than that, you’ll need a designated PD cable.

In addition to that, PD ports also have smart voltage detectors. When you plug a device into a PD charger, the charger automatically determines the correct amount of power. This allows you to get optimum power delivery for any device without damaging it. A powerful PD charger can push 90 watts to your laptop, then step back to 18 watts for your headphones.

One good example of an exceptionally powerful PD charger is the RAVPower 90W 2-Port USB-C Wall Charger. Its dual ports can deliver up to 90 watts in any combination. You can charge a 90-watt laptop on a single port, or plug in two devices to share the power.

PD cables can also deliver power in two directions. This allows you to use one USB device to power another. For instance, you could use a tablet or smartphone to charge a flashlight or emergency radio. This depends on the devices and whether or not they’re compatible. Not all PD-capable devices support two-way charging. 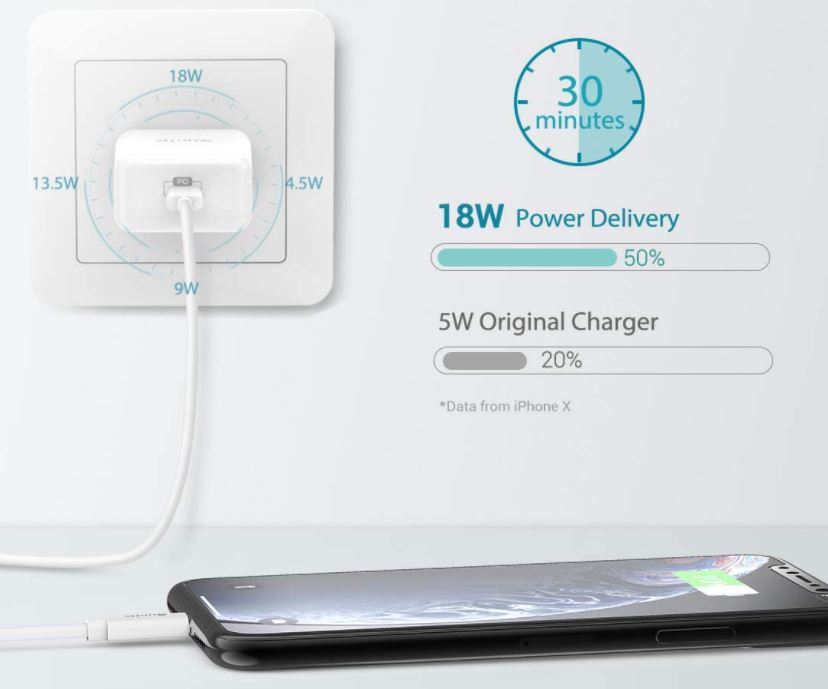 If you’re an Apple user, you might be wondering what this has to do with Lightning. The answer is that Lightning and USB Type-C are based on the same underlying USB 3.0 technology. This means that there’s a lot of cross-compatibility between the two formats. Keep in mind, though, that the plug is different. A Lightning cable uses a reversible 8-pin plug, while USB Type-C uses a reversible 18-pin plug.

In addition to that, Lightning devices would best be described as “semi-PD-capable.” Instead of a maximum of 100 watts, it can deliver a maximum of 30 watts. That’s significantly more than the 18 watts of ordinary USB, but not enough for powering a laptop. Lightning also doesn’t offer the same rate of data transfer as USB Type-C, and is limited to USB 2.0 speeds. However, that’s not a concern for charging, only for transferring files. 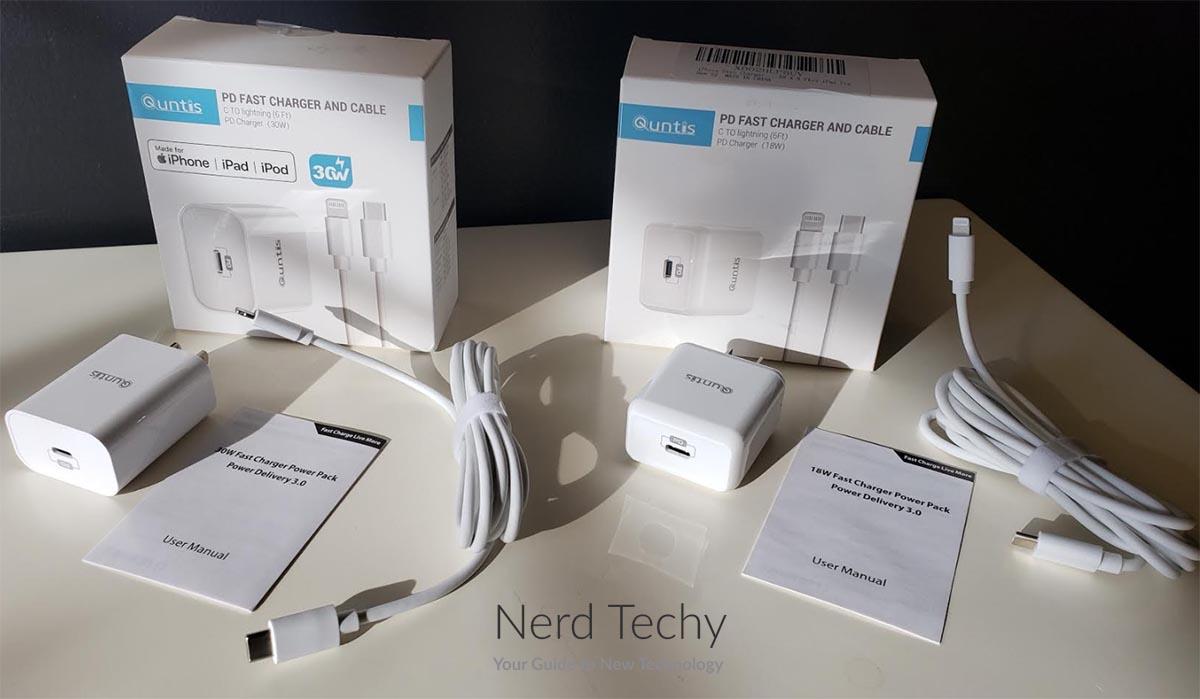 The Quntis 18-watt and 30-watt fast chargers are cosmetically similar in most respects. They’re both small AC adapters with a single USB Type-C port on the back. The housing on the 30-watt unit is a bit beefier, but only slightly. Both chargers are available in white, while the 18-watt charger comes in a black variant. On both charger models, the PD port on the back is clearly marked in grey type. There’s also a grey Quntis logo on the top. Other than that, they’re fairly plain.

The one disappointment in terms of design was the fact that the prongs don’t collapse. Collapsible prongs are a common feature on many USB chargers, and for good reason. They’re less likely to get bent in your luggage, or to damage anything else you’re carrying. They also won’t jab you in the thigh if you decide to carry the charger in your pocket. 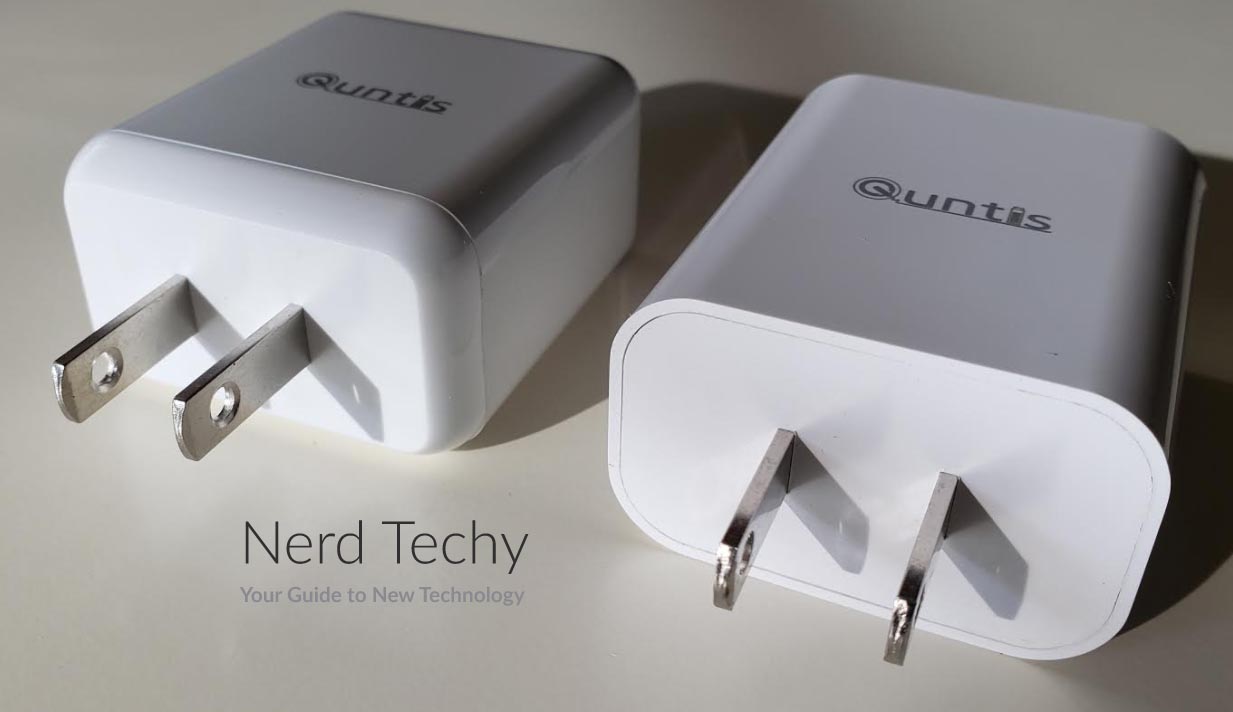 That said, the Quntis charger comes with everything you need to get started. There’s a six-foot USB Type-C to Lightning cable included in the kit. This is fortunate, since it’s not a very common cable type, and could be tough to find. There’s also a nifty velcro tie to keep everything organized. Quntis even provides an 18-month warranty on materials and workmanship. Along with 24/7 customer support, that’s great coverage for an affordable charger. 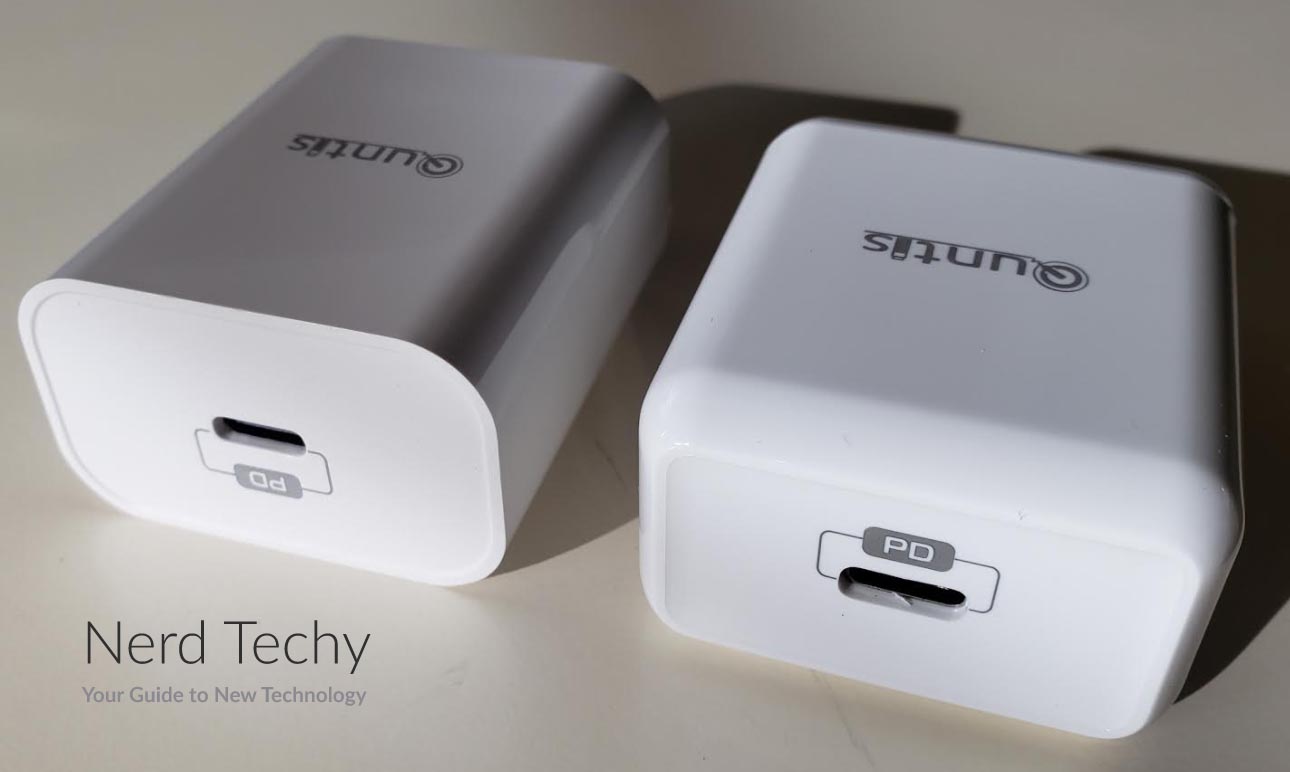 If you want even more power, consider the CHOETECH 61W USB-C (GaN & PD) Charger. It will deliver up to 61 watts, enough for faster-charging Android phones and even some laptops.

Both Quntis fast chargers come with a full array of safety features to protect your devices. There’s over-voltage protection, to prevent damage from power surges, in addition to overcharge protection, to prevent damage due to charging a full battery. There’s also an internal temperature sensor that will deactivate the charger if it starts to overheat. And, like all PD chargers, they both adjust the voltage automatically as needed. So if you have smaller devices that need a weaker charge, you can use them on the same charger. 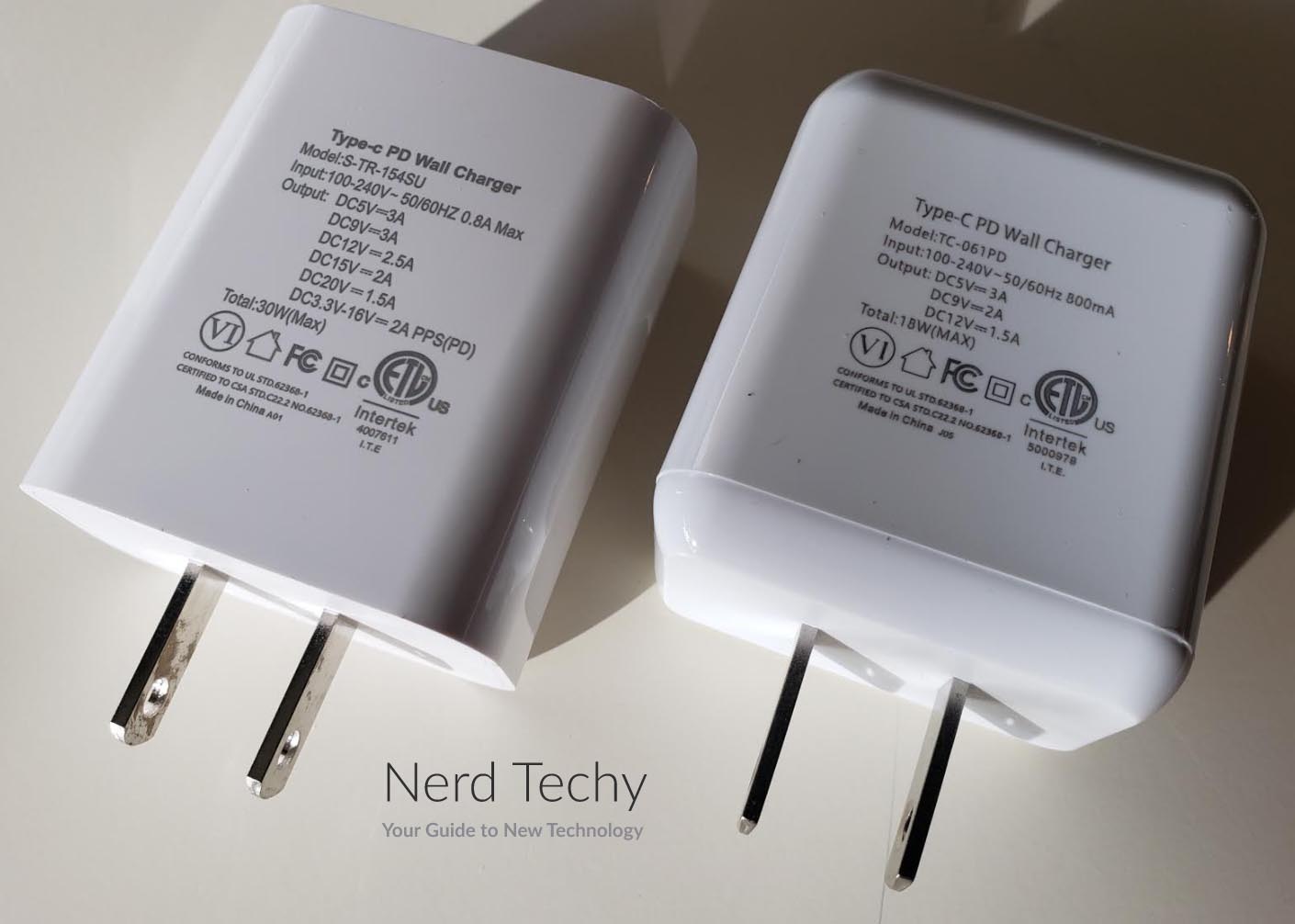 The main downside of any Lightning charger is that it will only charge Apple devices. Moreover, it will only charge iPhones and iPads. Other Apple devices use USB Type-C, but they’ve chosen to stick with Lightning for their smaller electronics. On the other hand, if you need a lightning charger, an ordinary USB Type-C charger won’t cut the mustard. You need one with the correct voltage, which both Quntis chargers deliver. You also need one with a lightning plug, which you get with the Quntis chargers. 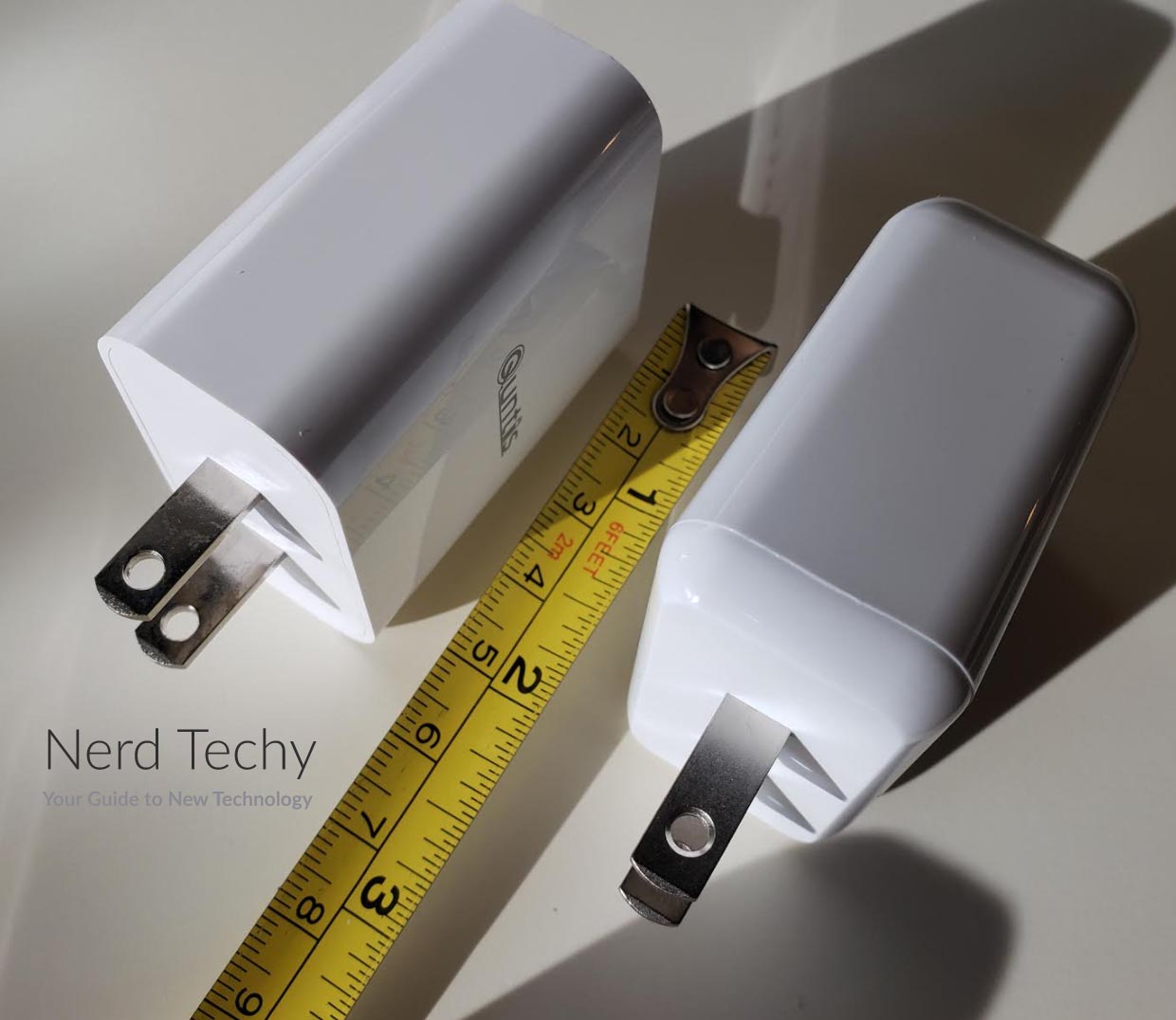 Lightning issues aside, there’s no reason you can’t use either Quntis charger with other USB Type-C devices. There’s no USB Type-C to Type-C cable included in the kit, so you’ll have to provide your own. You’ll also be limited to a maximum of 18 (or 30) watts, slower than other Type-C PD chargers. On the other hand, you’ll have the versatility to charge your Lightning devices as well.

As you can see, the Quntis 18w and 30w fast chargers are identical in most respects. Both of them offer plenty of protection from overcharging, over-voltage, short circuits, and other hazards. Similarly, both of them are designed with a single USB Type-C port. They also share the same drawbacks. Neither one has collapsible prongs, and neither one offers more than 30 watts. 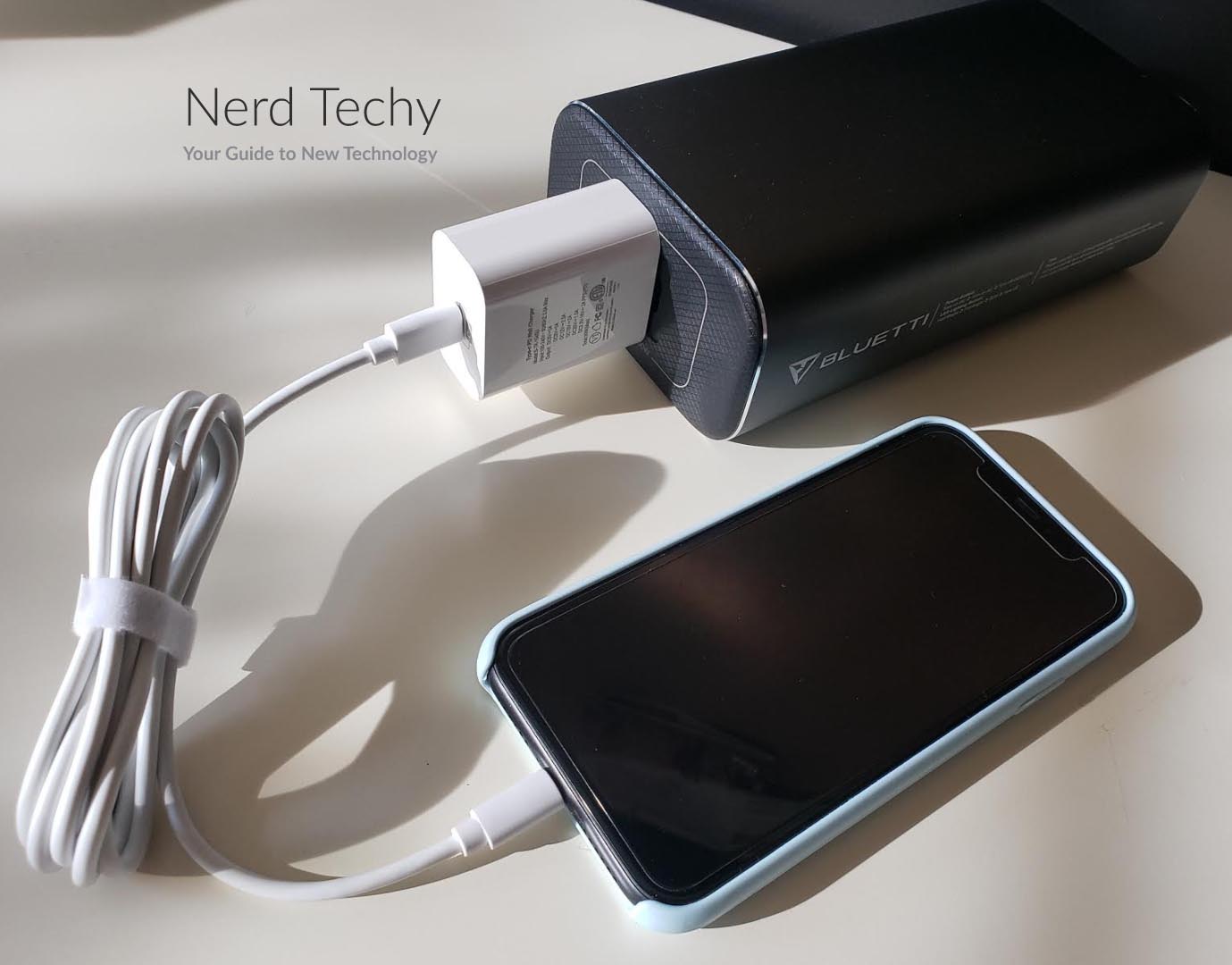 That said, there are a couple of differences that will make the difference. The first is obvious, and it’s the one we’ve discussed most: the charging power. Whether or not the extra 12 volts will matter depends on your device. However, most Lightning devices are capable of drawing a full 30 watts. For any of those devices, the Quntis 30w Fast Charger will perform faster.

On the other hand, the Quntis 18w Fast Charger is a bit cheaper. It’s not a huge amount of money, but why pay extra for wattage you don’t need? Not only that, but the 18-watt charger is available in black as well as white. Aesthetics should never be your primary concern when choosing a USB charger. But if you’re on the fence, why not go with the better-looking option?