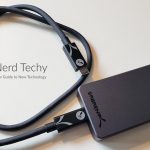 In a perfect world, your computer would have all the storage you could possibly need. But we don’t live in a perfect world, and even the beefiest PCs could use a hand with larger projects. A quality external hard drive gives you an easy way to expand your workstation’s capacity as needed. Not only that, but an external hard drive is more portable than carrying around a whole PC. It’s even easier than carrying a laptop, so it’s a great way to transport your files.

Of course, some external hard drives are better than others. For instance, some are made of aluminum, while others are made of cheap plastic. Some offer very high rates of data transfer, while others plod along slowly. Simply looking for the biggest capacity doesn’t guarantee that you’ll be happy. You need to look for the complete package.

Today, we’ll be reviewing the Sabrent Rocket XTRM-Q 2TB External SSD. This is a powerful, 2TB external drive that’s designed to work with both PC and Mac. But how well engineered is it, and how fast can it transfer files? We’ll take a deep dive into all of the Rocket XTRM-Q’s features, so you know what you’re looking at. After that, we’ll render a final verdict. Let’s get started!

If you’re looking for an external hard drive, you probably wee the term “SSD” a lot. SSD is short for “solid state drive”, and it refers to the technology used for data storage. So, what makes solid state storage superior to other types of storage?

The other type of hard drive technology is called HDD, which is short for “hard disk drive”. HDD technology was developed back in the 1950s by IBM. In 1957, they released the IBM 350, the world’s very first hard drive. It was the size of a double-wide fridge, and had a capacity of 3.75MB. The technology involved is fairly straightforward. The data is encoded in a circular metal disc, which has magnetic material embedded in it. A spindle with a small magnetic “needle” can read or change this data as the drive spins. It works a lot like a vinyl record, but it reads magnetic 1s and 0s instead of a groove in the disk.

Over the past 63 years, there have been significant advances in HDD technology. Better magnetic material has improved accuracy. And, obviously, the size has gotten significantly smaller. You could fill an airplane hangar with old IBM 350 HDDs and still have less storage than a modern PC. However, the technology is fundamentally the same, and it’s reached a mechanical limit in terms of speed. The reason is that even in the latest SDDs, you can only read as fast as the disk can spin. The fastest HDDs top out at around 7,200 RPM. Without significant developments in bearing technology, they’re not getting any faster.

An SSD doesn’t suffer from this limitation, since it doesn’t rely on a mechanical read/write process. Instead, it uses quantum tunneling to store data in a semiconductor matrix. Honestly, it would take an entire article just to explain how quantum tunneling works. Suffice it to say that instead of using a magnet to read and write data, an SSD uses electrons.

So instead of moving at very fast mechanical speeds, an SSD works at the speed of light. This allows for blazing fast read and write speeds, so you can quickly load – and save – very large files. SSDs are also more durable than HDDs. Because they don’t have mechanical parts, there are fewer pieces that could get broken.

There’s one thing you should be aware of. SSDs will slowly decay over time and lose data if they’re not plugged in. As long as your SSD is powered on at least once a year, this won’t be a problem. But if you need a hard drive for long-term storage, an HDD is a more reliable choice. For everyday use, an SSD is going to do a much better job. 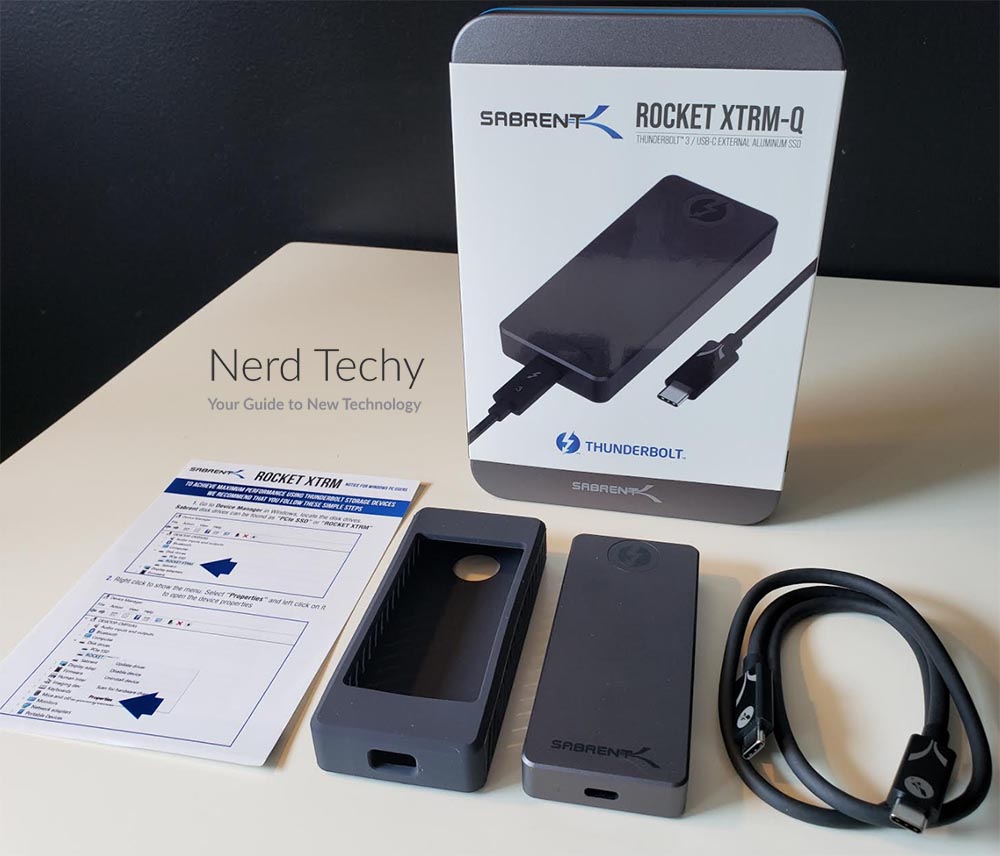 The Sabrent Rocket XTRM-Q is a compact external SSD that’s designed primarily for transport. It measures 4.9 inches long, 1.8 inches wide, and 0.6 inches thick. At this size, it’s about half as big as a modern smartphone, so it’s easy to carry in your pocket. If you want an even more portable option, you could always choose the Sabrent Rocket Nano. This option is smaller than a credit card, so you can literally take it anywhere. That said, it doesn’t offer as much capacity as the Rocket XTRM-Q. And for most ordinary purposes, the XTRM-Q is more than small enough.

The design of the Rocket XTRM-Q is both durable and attractive. It’s rectangular, but with rounded corners and beveled edges to eliminate points and jabs. The case is constructed from anodized aluminum, which is more durable than most SSDs. It’s matte black in color, so it’s easy to keep clean and won’t attract fingerprints. On one end, there’s a single USB Type-C/Thunderbolt 3 port for connecting to your devices. Towards the other end, there’s an embossed lightning bolt in the case. Other than that, it’s completely plain, with no blinking lights or colorful elements. 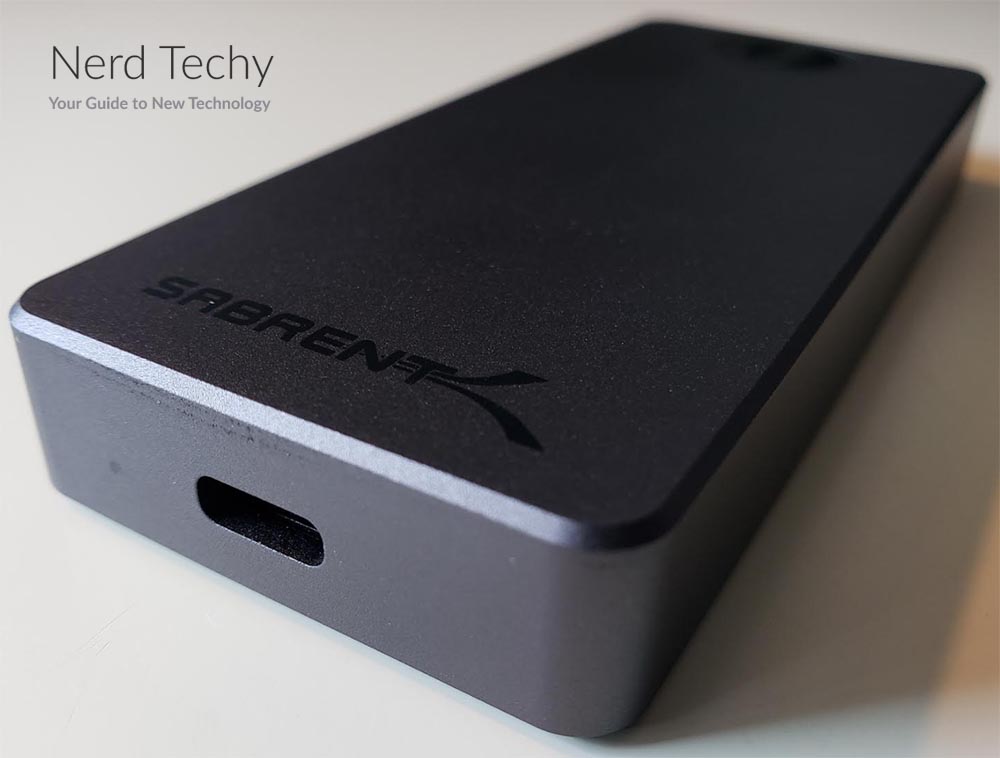 There are a couple of additional elements that make the Rocket XTRM-Q more functional. First, there’s a built-in thermal pad that helps dissipate heat evenly throughout the case. There’s also a temperature monitoring system that’s designed to keep the drive cool. In the version we reviewed, the 2TB version, the cooling system worked just fine, even during heavy use. However, we’ve seen complaints that the 8GB version can run hot. All versions come with a pair of anti-skid bumpers on the bottom, which prevent slipping and scratching. Along with the drive itself, you get a Thunderbolt 3 cable and USB Type-C to Type-A cable. This is everything you need to get started. 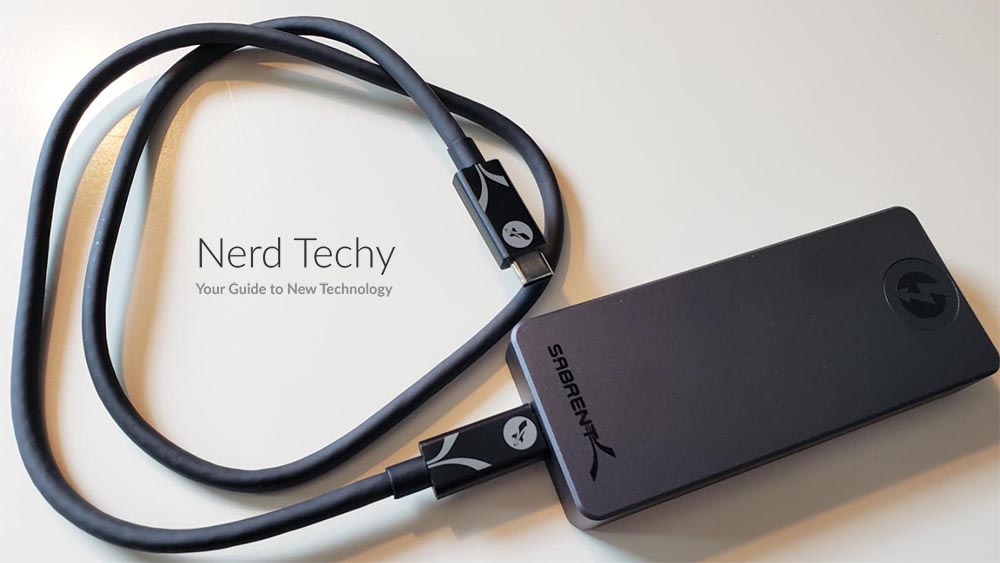 The Sabrent Rocket XTRM-Q 2TB External SSD, as the name implies, is a 2TB hard drive. This size has become more or less the standard in recent years. It’s enough capacity for almost anybody, but without being overly expensive. We should mention, though, that Sabrent offers different variants of the Rocket XTRM-Q in 1, 4, and 8TB capacities. Other than the capacity, they’re basically the same. We’ve also reviewed the original Rocket XTRM in the past. This older version is more affordable, and comes with up to 4TB of storage. It doesn’t work with USB, though, so only Mac users can take advantage. 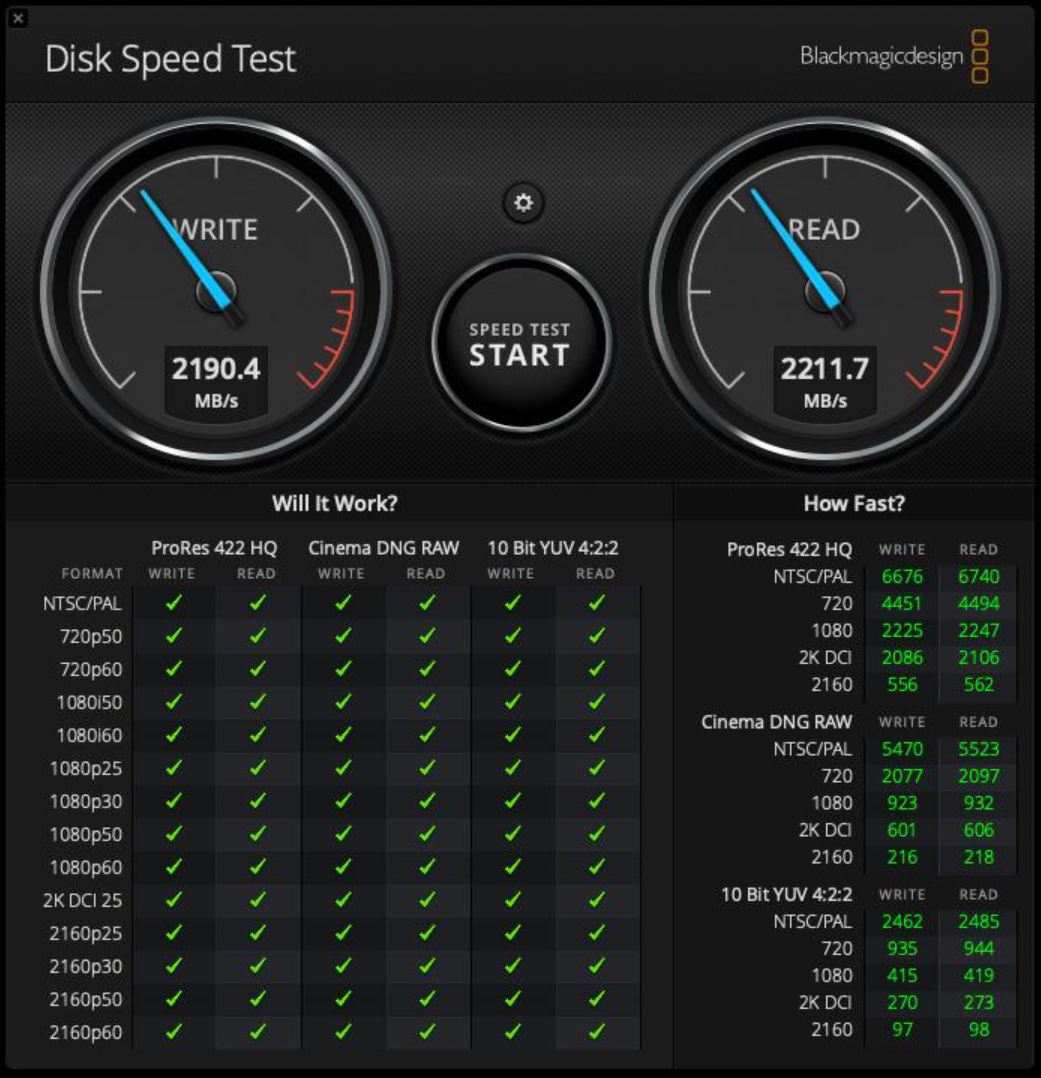 There are two ways of connecting the Rocket XTRM-Q to your computer: USB Type-C and Thunderbolt 3. Both types of cord have the same physical port, which can be confusing to some people. However, the cord technology and protocols are different. The main thing to remember is that USB Type-C is universal, whereas Thunderbolt 3 is a Mac protocol.

If you have a newer Mac, you’ll definitely want to use the Thunderbolt 3 connection. It allows for absurdly fast transfer rates of up to 2,700 MB/s. This is three times as fast as the USB Type-C connection, which tops out at 900 MB/s. That’s still very fast, even by today’s standards. It’s just not as ridiculously fast as Thunderbolt 3. That said, the Rocket XTRM-Q is not compatible with earlier versions of Thunderbolt. If you have an older Mac with Thunderbolt 1 or 2, you’ll have to use the USB connection instead. 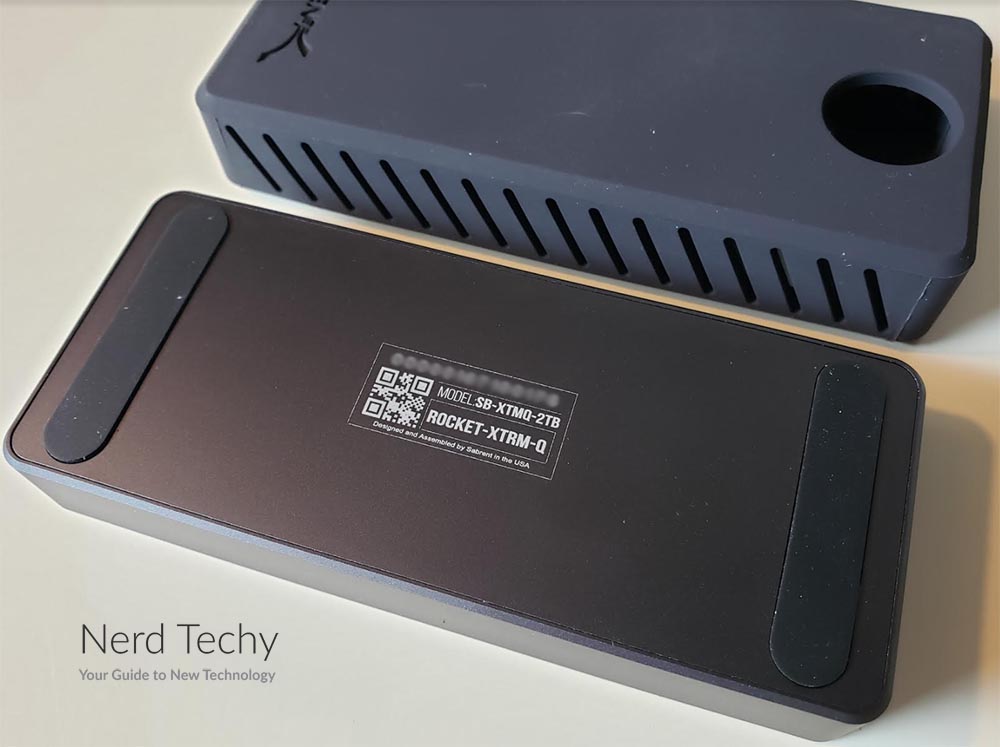 The Sabrent Rocket XTRM-Q is a plug and play SSD on any system. There are no drivers required, so you just have to plug it in. If you’re having trouble on a Mac, make sure your port is Thunderbolt 3. Remember, it won’t work with Thunderbolt 1 or 2. When in doubt, try switching to USB and seeing if your computer recognizes the drive. 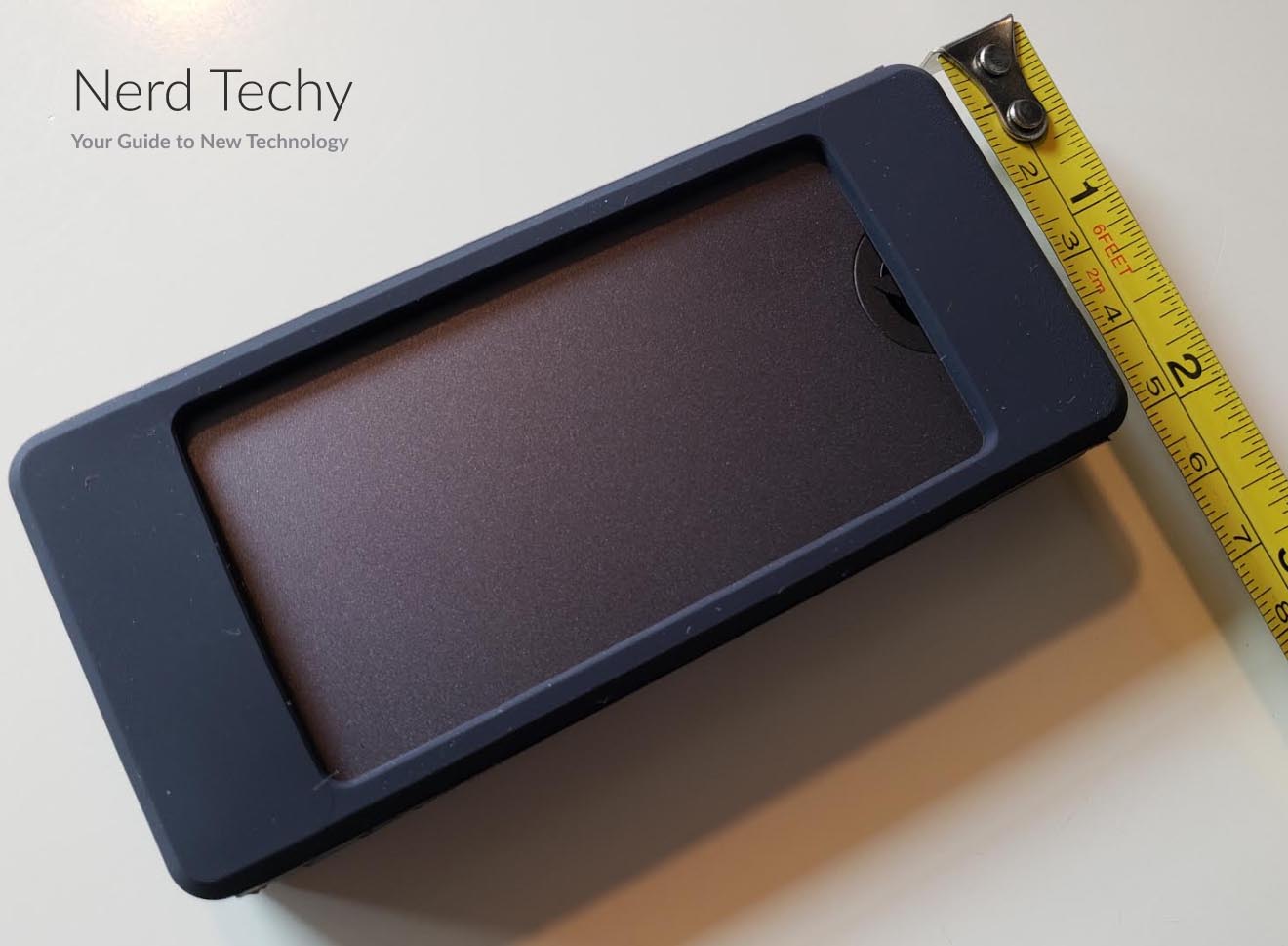 Similarly, there’s no additional power supply required. This is great for travel, since you don’t have to carry around a bulky AC adapter. The Rocket XTRM-Q gets all the power it needs directly from your computer via USB or Thunderbolt. A downside of this design is that it relies on your computer’s power supply. If you’re using a laptop on battery, your drive will drain the battery. On the other hand, you can use your external drive on a plane, where it can’t be plugged in.

If you’ve heard of Sabrent’s reputation for quality but prefer an internal drive, they also make those. The Sabrent Rocket NVME goes in your computer’s PCIe slot, with a low profile that fits in most PC cases. It’s obviously not portable, but it’s a great way to expand your computer’s on-board storage. 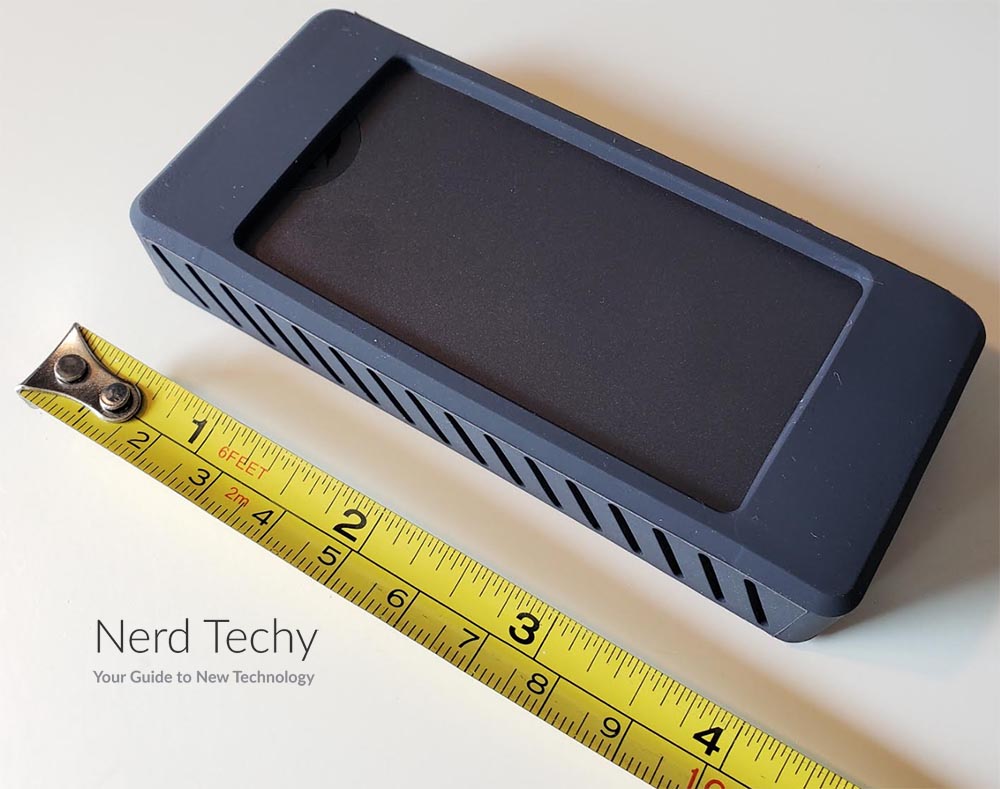 So, is the Sabrent Rocket XTRM-Q worth your time and money? If you want a tough, portable external SSD, the answer is a strong yes. It offers an impressive amount of storage capacity in a pocket-sized package. You can carry it alongside your smartphone every day, or throw it in a backpack for travel. With its anodized aluminum case, it’s tougher than most external drives, enough to take a beating. Even better, there’s no external power supply. All you need is the drive itself and a cable for your computer. 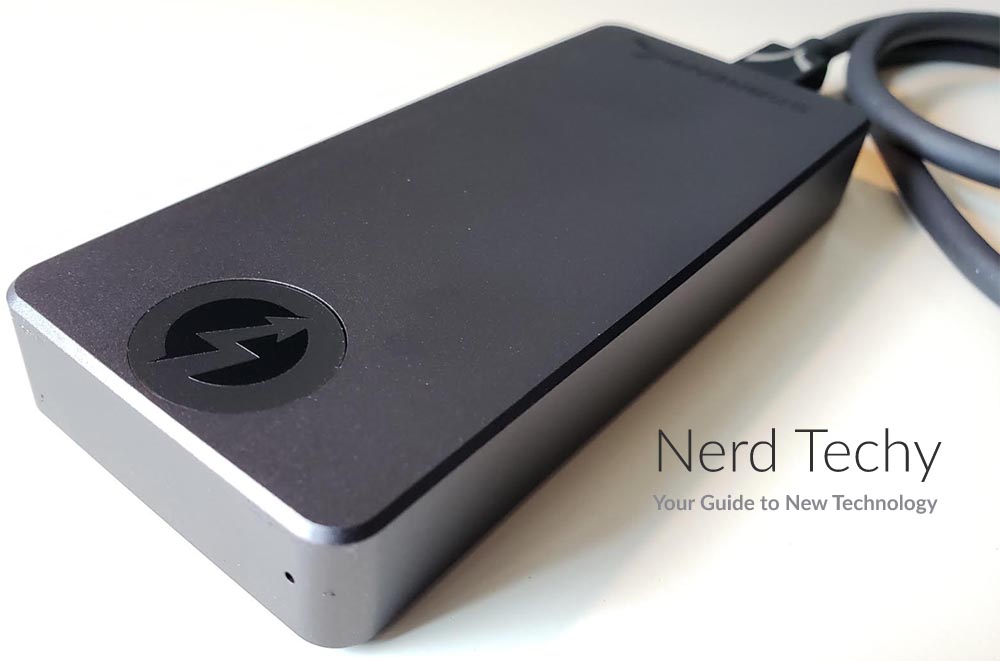 To be fair, the Rocket XTRM-Q isn’t perfect. The 8TB variant tends to run hot, and the Thunderbolt drive isn’t compatible with older Macs. Even so, you can still connect with USB. The 900 MB/s USB transfer rate might be “slow” compared to Thunderbolt, but it’s still very fast. You can easily transfer a full-length movie in two minutes. This makes the Rocket XTRM-Q ideal for content creators, musicians, and anyone else with large files. You can easily save and load backups without it taking a huge chunk out of your day. All in all, this is the complete package. If you’re in the market for a new external SSD, you’re looking at one of the best drives available.