If you’re looking to upgrade your internal storage, you’ve got a few choices to make. The most popular choice is solid state drives. These drives are capable of extremely high throughputs, letting you handle large file transfers easily and swiftly. On the other hand, the trusty old spinning disk storage devices are still plentiful. These drives are cheaper than ever, providing massive amounts of storage. When you consider the price you’re paying per gigabyte of data, hard drives are usually 75% cheaper (if not more) than solid state drives.

Not sure which one is right for you? The decision isn’t always black and white. When it comes to reading large media files, there are very few benefits to an SSD. For an operating system drive, SSDs are vastly superior. But what happens when the lines are blurred? Game data is primarily made up of large media files, but the few small bits of code that only occupy a fraction of the space need to be accessed quickly if you want top level performance.

Hybrid drives are a unique solution to this problem. Just like the data you’re using, these drives have a massive amount of storage space on the disk platters, but also contain a small amount of SSD space. This SSD space isn’t given to you in addition to the existing storage, but instead used as a high speed storage space to place your most accessed files. Think of it like the top drawer in a filing cabinet. You can put all the files you need for quick access there, while the rest of your files are carefully organized for long term storage.

There have been some mixed reviews on the concept of hybrid drives. This is mainly because there are a lot of drives on the market that have offered disappointing performance. But Seagate has been in the storage market for many years, and their Firecuda is the latest in a long line of positively reviewed hard drives. Today, we’ll be putting the latest version of the Firecuda to the test to see how it performs. 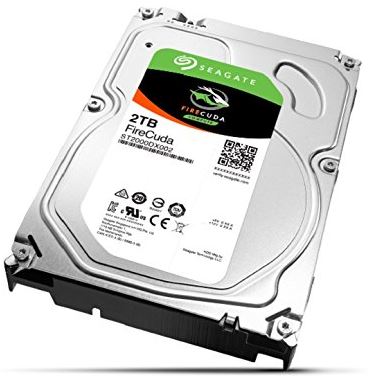 While the Firecuda name is quite new, really this is just a rebrand of Seagate’s longstanding line of solid state hard drives. This particular version is the second update to the Firecuda line, and the fifth generation of hybrid hard drives. We’re looking at the 3.5” version, which is available in both 1TB and 2TB storage versions. It’s shaped the same as any typical 3.5” hard drive, so it’s full compatible with any desktop computer or external case.

The drive has 64 MB of head cache. All hard drives require cache for the read heads, so this isn’t related to the SSD portion of the drive. The SSD itself is 8GB in size, which is large enough to hold a solid chunk of a game, or several media files. The drive spins at 7200 rpm, which is a typical speed for consumer drives. 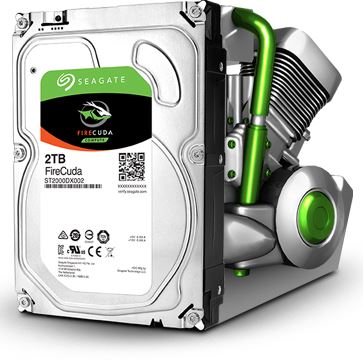 Generally, we wouldn’t need to explain how a hard drive works. But before we can show you how this one performs, we first need to explain the differences between the various hybrid hard drives on the market. From your perspective, everything will work the same as any other hard drive. You can copy files to it, and read them back without any noticeable change. But behind the scenes, there is a lot of advanced calculations going on. To your computer, there is no difference between the solid state portion of the drive and the spinning disk portion. All it sees is 2TB of storage. But the firmware inside the drive is always trying to decide which files should be duplicated to the SSD, and they each do this differently.

The fact that they are duplicated and not moved is important – the original files still exist on the main drive. This means that, at any time, the drive can decide that one file is more important than another, and quickly overwrite it without losing the original. This means that small improvements to its selection process can result in almost instant performance improvement.
The difference between this drive and competitors is this selection process for files. This is called the caching algorithm. Seagate specifically targets latency. It looks to see which requests take the longest for the hard drive to fulfil. These are the files that are then cached. The fact that it’s using latency in addition to file size is important. This means that the files with the most powerful impact on your computers performance are cached, making their algorithm more efficient than most others on the market.

Since this is technically two different hard drive technologies combined, we really need to test both storage types to see how they stack up. For reference purposes, most hard drives average between 80 MB/s and 150 MB/s transfer rate, while SATA 3 solid state drives range from 200 MB/s to 400 MB/s in most cases.

Our tests started off with a 4K read and write cycle. This crates tinny little 4 kilobyte files on the drive, something that typical hard drives tend to struggle with. We found that the Firecuda performed very well, with an average read speed of 153 MB/s and a write speed of 119 MB/s. This puts it in direct competition with the highest consumer grade hard drives. It’s true that you can find faster hard drives on the market, but these are usually designed for server use and just as expensive as SSDs anyway. 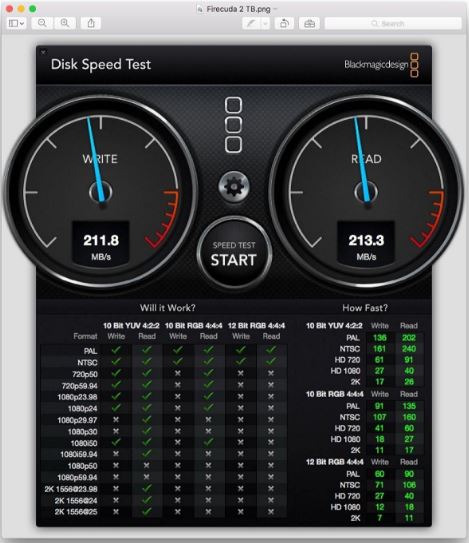 As you’d expect, we noticed significant performance when testing the SSD portion of the drive. Read speeds jumped to 213 MB/s, while write speeds hovered around 211 MB/s. So, this isn’t the fastest SSD on the market, but it’s roughly equivalent to most mid-level drives. That being said, cached data is clearly being accessed at twice the speed as the rest of the data.

When it comes to getting fast storage performance, transfer rate is only one piece of the puzzle. Latency measures the time between a request being made and fulfilled. Generally, latency is in the millisecond range and barely perceptible. But hard drives tend to choke up when there are too many requests being made at the same time, especially when dealing with files that are spread out over the platter surface. This is one of the main things that solid-state storage is supposed to address. To put this drive to the test, our latency benchmark didn’t just involve a single transfer operation, but 16. We made 16 requests all at the same time for files in different areas of the drive, to see how much caching helps the issue.

With caching disabled, it took 1.5 seconds for all the read operations to be completed, while the write operations took 2.1 seconds. These numbers are pretty abysmal for an SSD, but standard for a hard drive. When caching was enabled, these numbers dropped to 0.7 seconds and 0.9 seconds. Cutting the read and write times in half is much more than we expected, and really demonstrates how impressive the caching feature is.

If you understand what this drive is, and what it’s supposed to do, there isn’t much to complain about. But there is a lot of misunderstanding about what these drives are. They are certainly not a replacement for an SSD. If we reviewed a 256 GB SSD that was getting less than 300 MB/s, we probably wouldn’t recommend it. Instead, it’s important to remember that this drive is more of an upgrade to the typical hard drive. 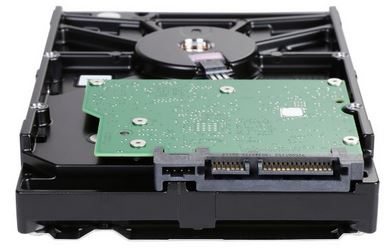 Is the Seagate Firecuda Right for Me?

When you’re choosing an internal storage device, you need to consider what you’ll be using it for. Based on our tests, the Seagate FireCuda is ideal for a second hard drive that you can use to store your games. The ratio of SSD to HDD is perfect for most modern games. If you bought an SSD that was priced the same as the Firecuda drives, you’d fill it up with only one or two games. This way, you get 2TB of storage space and significant performance improvement.

If you’re on a tight budget, we’d also recommend this as a primary drive. An SSD would perform a little better, but the Firecuda will perform much better than a standard hard drive.
If you’re just looking for something to store your multimedia, you probably won’t see a huge benefit from this drive. But then again, if you’re willing to throw in an extra $10 for this model over the standard one, the caching feature might be handy to have ‘just in case’.

If you’re looking for high performance, this is not the drive you want. The industry is slowly moving away from SATA, and best performing drives are the PCIe M.2 Solid State Drives. They do cost a little more, but you should definitely consider one for use as your main drive before you make any purchasing decisions.