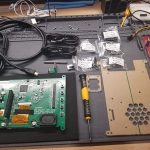 Whether you’re a hobbyist or a professional, a good touch screen can have a number of uses. The most basic example is to use as an input for your PC. You can run one app in your primary monitor. You can then display a second app on the touchscreen and control it by tapping and swiping.

A lot of people use a similar process for complicated programs like Adobe Photoshop. Say you have a panel or a menu that you use all the time. Pop it out of the main window and slide it over to your touchscreen. Now you can keep it open all the time without crowding out the main window.

Many touchscreen applications don’t even use a traditional computer. A simple screen with a cheap Raspberry Pi computer is capable of many tasks. For example, suppose a museum wants to make an interactive plaque for one of their displays. Sure, they could invest in an expensive tablet. Or, they could create something much more affordable that does the same job.

On the flip side, maybe you want to get into programming and you bought a Raspberry Pi. Bad news! There’s no display. But why spring for an expensive monitor when you’re working on a small computer? A smaller, more affordable screen is more suitable for student use. It’s also more portable than a big, heavy monitor.

Today, we’re going to review the SunFounder TS-7 Pro 7 inch Raspberry Pi Touch Screen. This is a 7-inch display that comes with a plastic frame. You install your Raspberry Pi inside, and it functions as a display. You can also use it with any kind of computer by connecting with an HDMI cable.

Of course, compatibility is just one of many things you need from a good touch screen. To find out how well it works, we’ll need to look a whole lot closer.

We’ll have to talk about how it’s built and how durable it is. We’ll need to consider how well the touch screen performs, and how you operate it. Additionally, we’ll also need to talk about which Raspberry Pi accessories it’s compatible with. After that, we’ll be in a good position to render our verdict. Let’s dig in, and see what we find! 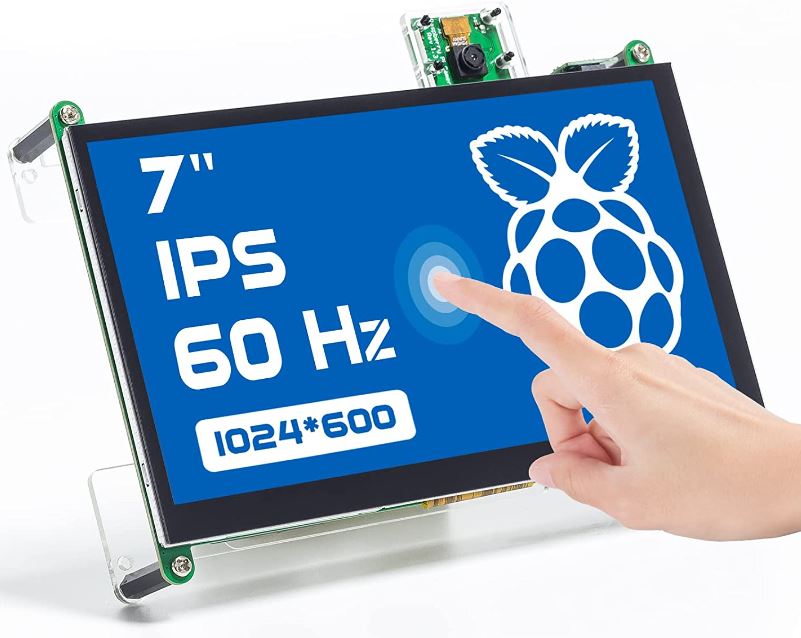 SunFounder is known for their high-quality Raspberry Pi accessories. Not long ago, we reviewed the SunFounder RasPad 3.0. It’s an enclosed tablet that turns your Raspberry Pi into something resembling an iPad. It’s also battery-powered, so you can work free of any power outlets.

The SunFounder TS-7 Pro 7 inch Raspberry Pi Touch Screen has an open design that’s perfect for hobbyists. It has transparent acrylic top and bottom panels, with four black posts connecting them at the corners. The touch screen panel itself sits in the front panel. Meanwhile, the circuit board sits on the back panel. Thanks to the gap in-between, it’s easy to reach inside and access ports and parts. 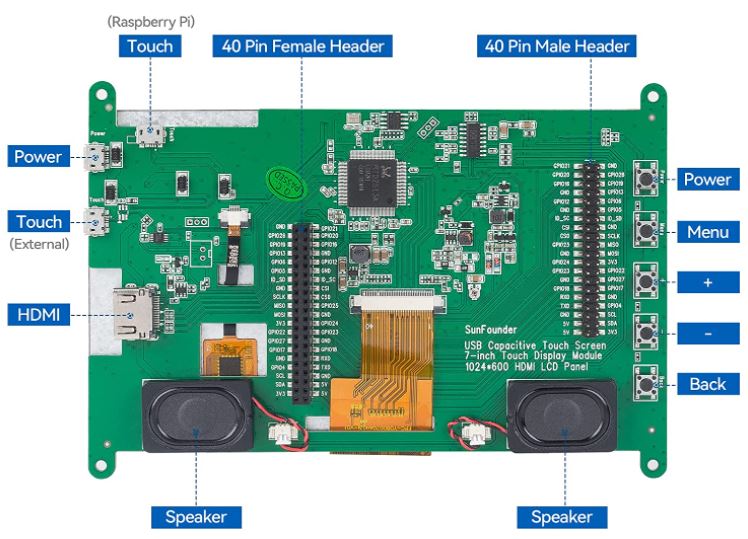 This is a hobbyist’s touch screen, which is apparent the moment you open the box. Everything is disassembled. You need to install the display panel on the front, wire everything up, and screw it together. That said, it’s still well-designed. There’s a set of mounting holes in the back, so you can mount it on a wall or bracket. There’s an additional hole where you can insert a small metal post, which is included in the kit. The post acts as a kickstand and supports the display at a comfortable angle.

When assembled, there’s a place to insert your Raspberry Pi computer. You’ll also find a built-in camera bracket, along with a separate mounting plate. There’s even a 2.5-inch SSD mount so you can install a hard drive. Note that there’s no Raspberry Pi or camera in the kit. You still have to buy those separately. Consider choosing a good quality starter kit.

On the plus side, you get everything you need for assembly. There’s a set of four bridges, with both USB and HDMI bridges for the Raspberry Pi3 and Pi4. You also get a pair of Micro USB cables, an HDMI cable, and a Micro HDMI cable. 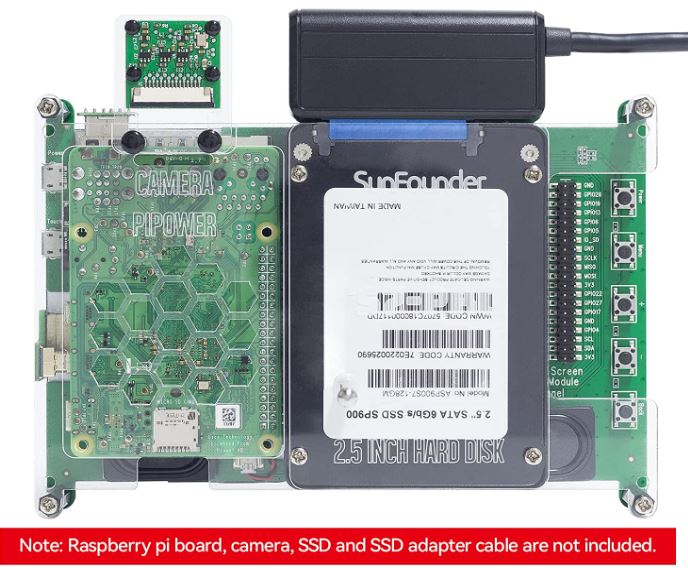 The TS-7 Pro sports a 7-inch IPS display. IPS displays have a wider viewing angle than their ordinary counterparts, out to 178 degrees. Even if you’re looking at an extreme angle, colors will not be distorted. The resolution of 1,024 x 600 pixels is less than 720p, which is a bit disappointing. Then again, it’s not a huge screen to begin with, so it’s not like you need that many pixels. Besides which, it’s very affordable, and the refresh rate of 60Hz is in line with today’s mainstream monitors.

The screen supports 5-point touch. This is a measure of how many inputs it can handle simultaneously. So you could theoretically tap away with five fingers at once. Many companies offer 10-point touch technology and advertise it aggressively. But how often are you using more than two fingers on your touchscreen, let alone more than five? For any realistic application, you’re getting all the control you need. 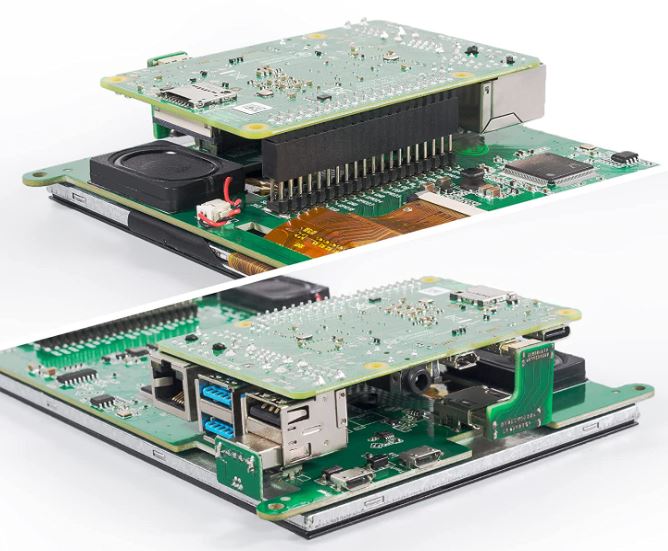 In addition to video, you’ll also get a pair of built-in speakers. These are small 3-watt cans that are good enough for the job. You’re not getting beautiful, studio-quality sound. But unless you crank the volume up all the way, everything is clear and you don’t hear any artifacts.

One thing we didn’t like is that there’s no battery. You’ll have to plug the TS-7 Pro into a power source. That said, it’s compatible with the SunFounder Power Pack. This is an optional battery pack that attaches to the back of the housing. It will get you between 90 minutes and 12 hours of use, depending on how hard you’re pushing it. Effectively, you’re turning your touch screen into a portable tablet. 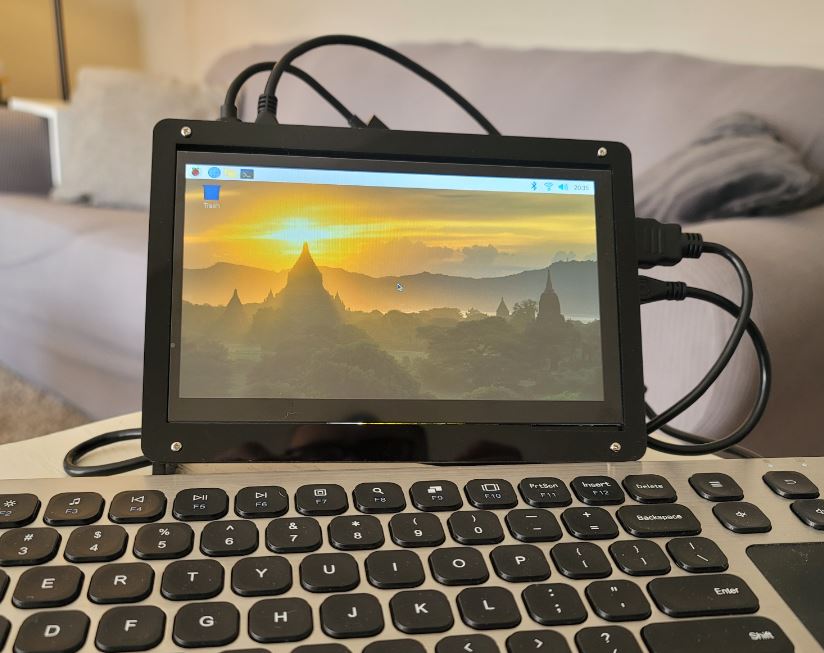 The TS-7 Pro stands out first and foremost because of its wide compatibility. It’s obviously designed for Raspberry Pi OS, but you’re not limited to that. It also supports Windows, MacOS, Android, and Chrome OS. You can even use it with Ubuntu, most other Linix distros, RetroPie, and Twister OS. Basically, it would be easier to list the systems it’s not compatible with.

Beyond that, you can use the display for all kinds of applications. It has GPIO pins, so it can connect to many devices and controllers. This is great for programming practice, but it also has many practical uses. 3D printing is a good example. 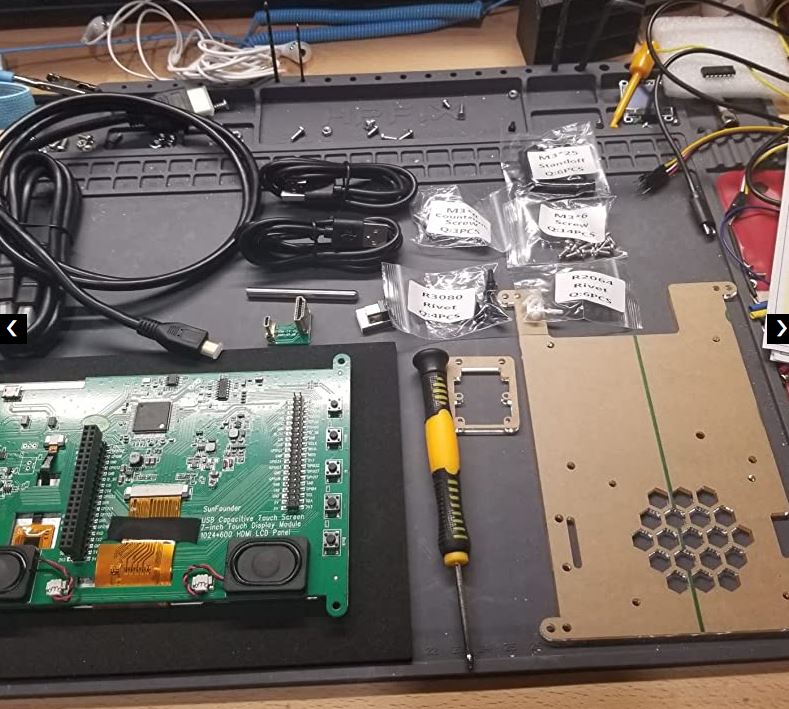 A lot of people use a Raspberry Pi computer to control their 3D printer. It has more than enough power, and it’s easy to customize. Not only that, but anyone who’s into 3D printing is already good with electronics. A controller with its own touch screen makes it very easy to operate your printer. You can mount it next to your printer and modify your designs on the display.

You can also connect a controller to the system. This is great for lightweight gaming on the Raspberry Pi. You’re not going to play Call of Duty on this machine. But there are many Raspberry Pi games designed to take advantage of the system’s size and capability. You can even connect the TS-7 Pro to your home assistant. Mount it on your wall, and you’ll have a touch screen display for controlling all your smart appliances. From one screen, you can control your thermostat, your dehumidifier, and anything else you like. 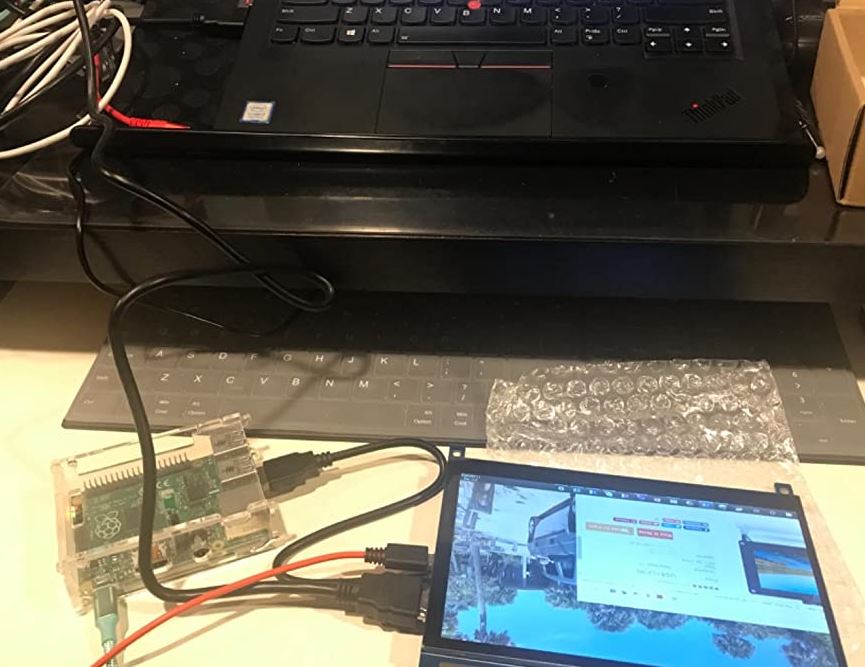 Why Use a Raspberry Pi?

Before we wrap up, let’s talk about what makes the Raspberry Pi so special. Why are people so excited about a tiny computer that can’t even run Call of Duty? There are two reasons: price and versatility.

When programmers work on smartphones and other smart devices, they don’t use an ordinary PC. They use a small programming computer with completely different architecture. Unfortunately, these small computers used to cost an arm and a leg. That’s not a big deal for a corporation or a professional programmer. But how many parents are buying their teenager a programming computer that costs hundreds of dollars?

The problem came to a head at the University of Cambridge Computer Laboratory. Cambridge is a prestigious university that turns down the vast majority of applicants. But in 2006, they didn’t even have enough qualified applicants to fill their Freshman computer science roster. They put together a team of scientists to study the problem. These scientists found that fewer kids were studying programming than ever before. The reason? Expensive programming computers.

In 2008, the scientists founded the Raspberry Pi Foundation to develop a cheap programming computer. They raised money from public grants and private donations, and spent three years building the first Raspberry Pi. Since 2011, millions of students have used Raspberry Pi computers to learn programming. 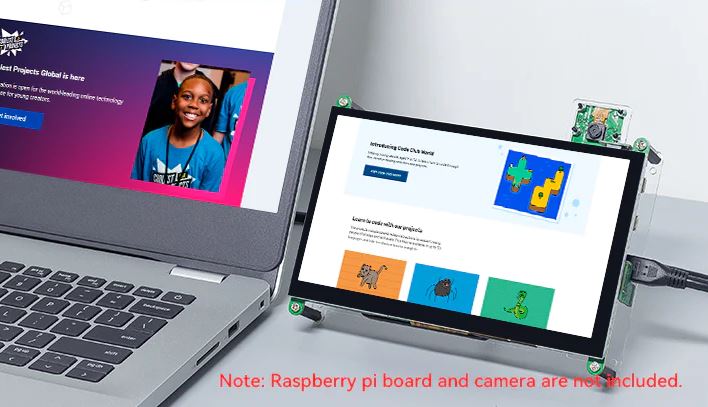 As it turns out, Raspberry Pis aren’t just useful for programming. As it turns out, cheap, compact computers have all kinds of applications. They can be used for kiosks, interactive displays, and many other purposes. This has made them popular with businesses.

That said, their main appeal is still to amateurs and hobbyists. Whether you’re excited about programming or controlling a 3D printer, you can put a Raspberry Pi to good use. If you’re not sure how to get started, you don’t have to do it alone. There are plenty of learning kits you can use to learn how the system works. 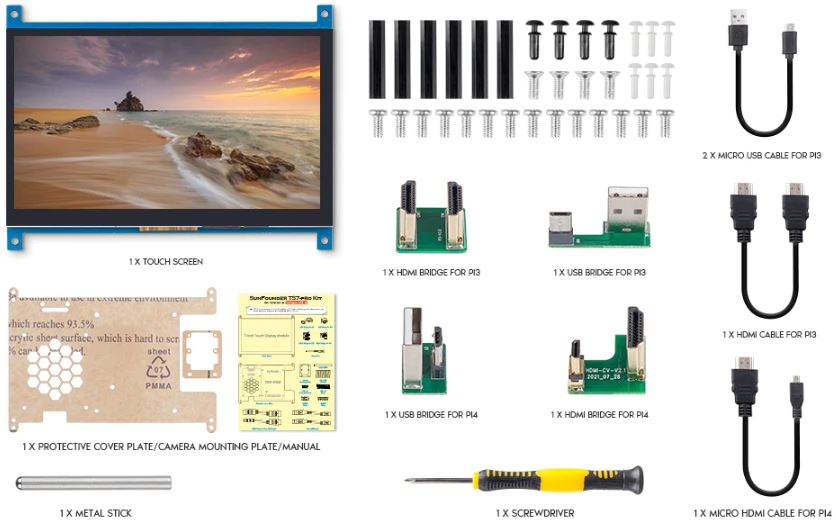 As you can see, the SunFounder TS-7 Pro 7 inch Raspberry Pi Touch Screen is a powerful little device. It’s a perfect companion for the Raspberry Pi, which fits on the circuit board just inside it. Alternatively, you can use it with a Windows or Mac computer. Beyond that, it has the same pioneering spirit shared by all Raspberry Pi enthusiasts and computer programmers. It’s made to be modular, so you can add parts to it or use it as part of a larger assembly. If you’re looking for an affordable, versatile touch screen, look no further.