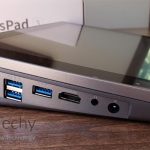 These days, you hear a lot of talk about the Internet of Things. This is a catch-all term for all the connected smart devices we use in modern life. Smart thermostats, appliances, security systems, and even smoke detectors are slowly becoming the norm. All of these smart devices make our lives easier and more efficient. For example, a smart thermostat can reduce your home’s energy usage. That’s good for your bank balance, and good for the environment. It also allows you to make adjustments from a distance. This is useful if you’re on the road a lot, especially if your local weather is unpredictable.

The explosion of IoT devices hasn’t just made our lives easier. It’s also opened up opportunities for inventors, professionals, and even hobbyists to tinker with new devices. Want to create your own smart thermostat? It’s surprisingly easy to do. But you need the right interface to program all your components. Using a desktop PC isn’t always the best option. Instead, many people choose to use a Raspberry Pi system. The Raspberry Pi is a fully functional mini computer, designed for programming. It’s certainly possible to perform other tasks, but programming is the number one application.

The thing with a Raspberry Pi is that it’s just the mini computer itself. There’s no display, or any way to interface with it. Much like a standalone desktop PC tower, you need some accessories to make the system fully functional.

That’s where the SunFounder RasPad 3.0 comes in. This is a DIY tablet designed to work with the Raspberry Pi. It includes a touchscreen display, a sturdy housing, and all the wires and other parts you need. Install your Raspberry Pi inside, and you’ve got a powerful tablet for programming or other light work. But does it actually do everything the manufacturers claim? And how easy is it to use? To find out, we’re going to have to take a deeper dive into this unique tablet. We’ll look at how it’s built, what you can do with it, and how well the touchscreen works. At the end, we’ll sum up what we’ve learned, and give our final verdict. Let’s begin! 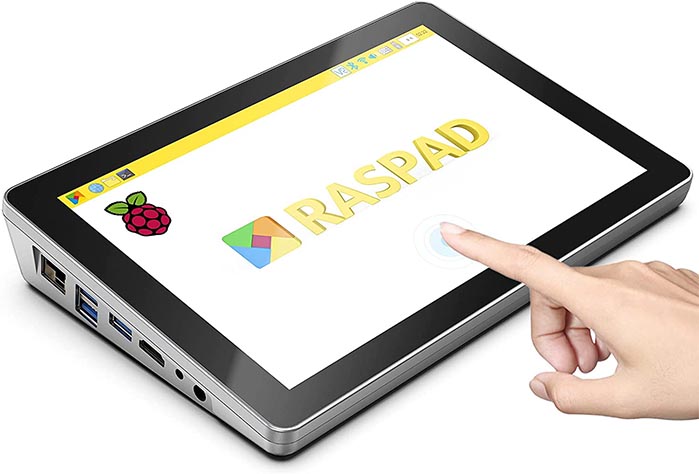 What’s Special About the Raspberry Pi?

Before we look at the RasPad 3.0 tablet, let’s take a minute to talk about what goes inside it. What is it about the Raspberry Pi so special? Simply put, it’s the platform of choice for programming smart devices. It’s also the best choice for anyone who needs a super-cheap, but functional, computer.

The story of the Raspberry Pi begins in 2006, at the University of Cambridge Computer Laboratory. While the laboratory had used to turn away thousands of applicants per year, they were getting fewer and fewer. In fact, there were so few that there weren’t enough qualified applicants to fill out the 2006 class. This was a worrying trend, and four Cambridge computer scientists put their heads together to find a solution. These four scientists were named Jack Lang, Rob Mullins, Alan Mycroft, and Eben Upton.

What they discovered was that fewer kids and teens were learning to program. Small programming computers of the time were expensive, so programming was becoming a niche hobby. By creating a cheaper microcomputer, the scientists believed they could revitalize programming as a hobby. This would bring more young people into programming, including people from disadvantaged backgrounds. In 2008, they founded the Raspberry Pi Foundation, and sought out public and private partnerships. By 2011, these efforts bore fruit, and the Raspberry Pi Model B was released. Within two years of its release, it had sold more than two million units, impressive for a manufacturer’s first computer.

The Raspberry Pi comes in a handful of variants, with subtle updates over time as technology improves. The actual computer has a profile similar to a credit card, and is a shade less than an inch thick. All versions can connect via USB Type-A, and some newer versions can also use Type-C. Out of the box, it runs the Raspberry Pi operating system, which is specialized for programming. That said, it’s also suitable for other tasks, and you can install another OS if you want to. The Raspberry Pi runs a number of OS versions, most of which are Linux-based builds. You can even install Windows 10 by using third-party modification packages.

At the time of this writing, the Raspberry Pi is the third-best-selling computer brand in the world. It’s used by everyone from professional programmers to hobbyists and tinkerers. It’s even spawned a small cottage industry of learning kits, for people to get used to the system. 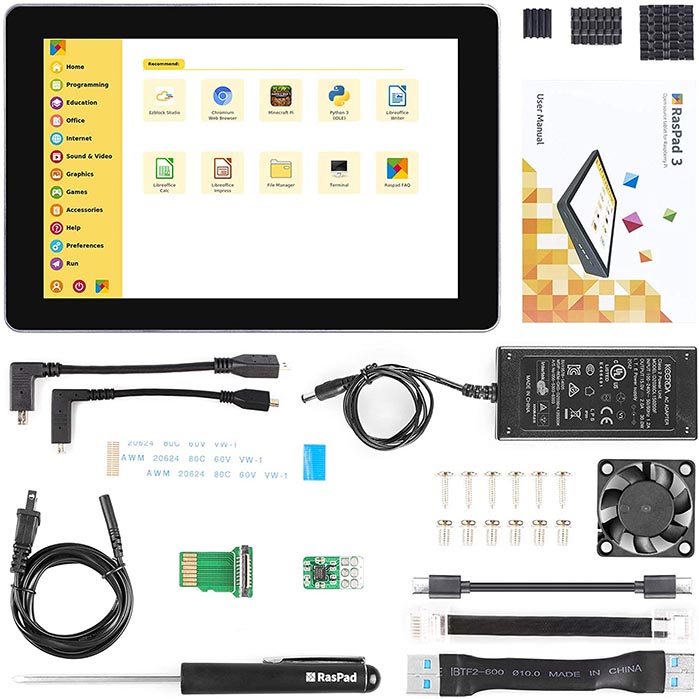 The SunFounder RasPad 3.0 is less a tablet and more a tablet kit. When you first open the box, the actual machine is in pieces. There’s a screen, a housing, a fan, various cables and cards, and a set of screws. There’s also a power supply, and a little Philips screwdriver just in case you don’t own one. Installation is pretty straightforward, and instructions are included. That said, you need to have your own Raspberry Pi – this kit is everything you need except the Pi itself. It’s compatible with the Raspberry Pi 4B, so make sure you’re getting the right version. Otherwise, you may or may not run into some compatibility issues. 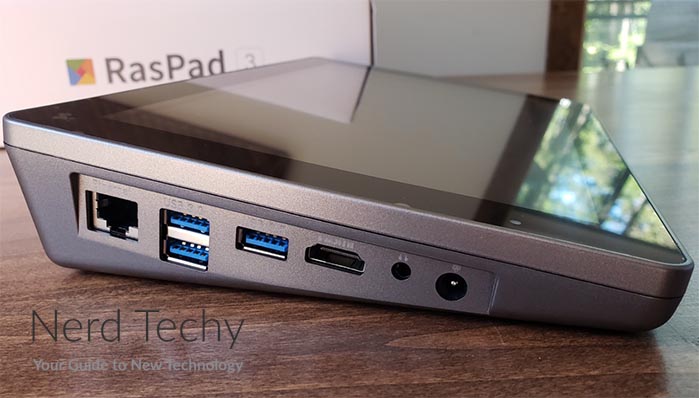 When fully assembled, the RasPad 3.0 measures 10.2 inches wide, 6.65 inches high, and 1.89 inches thick. That’s the thickness at it’s widest point. In fact, the design is sloped, and the front of the housing is only a little over half an inch thick. This makes it easy to lay the tablet on a desk or table, since the screen will be tilted towards you. It’s subtle, but it makes a big difference if you’re drawing, or using the on-screen keyboard. 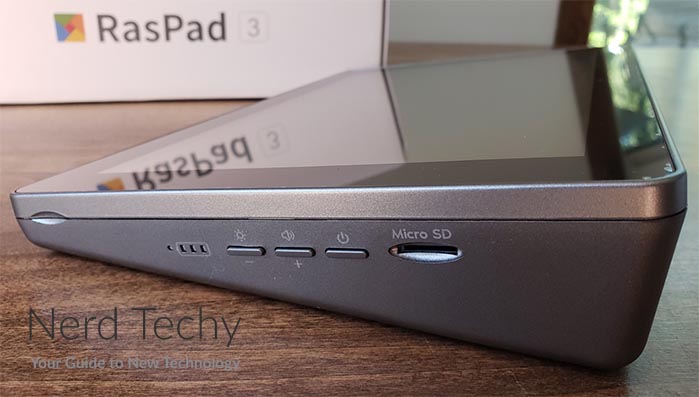 The rest of the design is pretty straightforward. On the left side of the silver-grey housing, you’ll find all the standard Raspberry Pi inputs and outputs. We’ll discuss those in a minute. On the right side, there’s a power button, a set of brightness/volume buttons, and a battery indicator. There’s also an SD card slot, which is a feature not native to the base Raspberry Pi. When all is said and done, the tablet will weigh 3.78 pounds. This is a bit chunky, but not excessive considering the size.

In addition to the standard Raspberry Pi OS, the RasPad 3.0 is compatible with several other operating systems. It works with Airduino, Android, Chromium OS, Raspbian, and Ubunto Desktop, just to name a few. 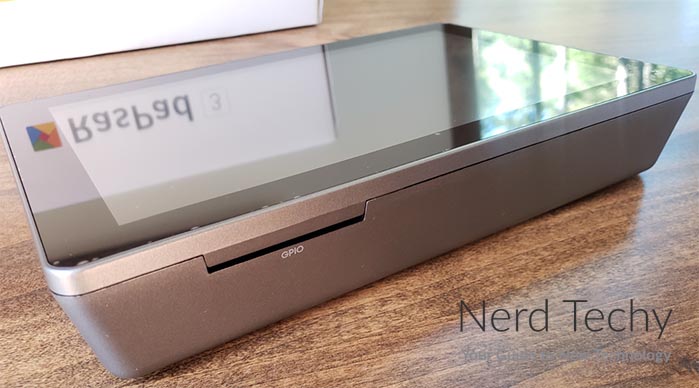 So, how can you connect the RasPad 3.0 to accessories, or get online? Any way you can with the base Raspberry Pi ports. The ports just peek through the sides of the housing, so you can plug in. This means you get a trio of USB ports for keyboards, mice, and other peripherals. You get an HDMI port if you want to connect an external monitor, and a 3.5mm aux port for external speakers. There’s also the Ethernet port for getting online. In addition, you get the Raspberry Pi’s wireless capability. You can hop on any type of WiFi network, or connect to other devices via Bluetooth 5.0. 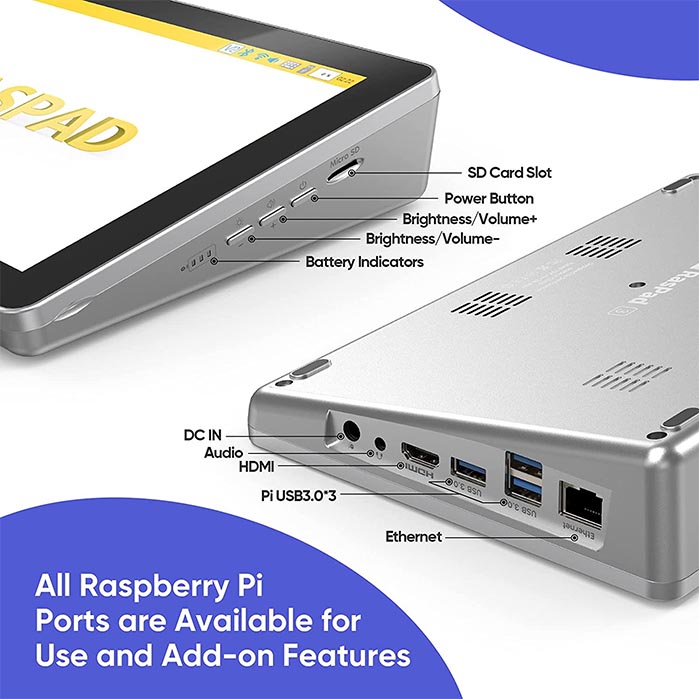 In addition to all that, the RasPad also has a GPIO extension. GPIO is short for “general-purpose input/output,” and it’s a common way to connect to smart devices. In this regard, you’re well-prepared for programming. You can also connect easily to 3D printers and other non-standard peripherals. There are also pre-drilled camera holes in the housing, so you can easily install an aftermarket camera.

One thing that could have used improvement was the battery life. The tablet’s internal battery only lasts for about five hours, depending on screen brightness. Not only that, but it takes over two hours to charge, which is fairly slow. On the other hand, the base Raspberry Pi doesn’t have any battery whatsoever. You have to remain plugged in at all times. In that sense, the RasPad outperforms. 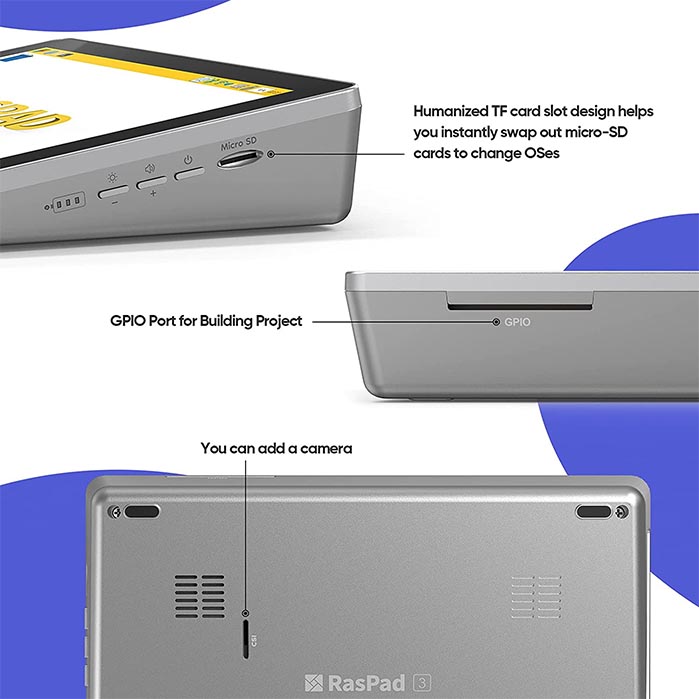 At the end of the day, the RasPad 3.0’s main attraction is the touchscreen. It’s what separates it from a bare case, after all. The screen measures 10.1 inches on the diagonal, and is an IPS panel. This means it has a wide viewing angle of 178 degrees, ideal for collaborative projects. It can sense up to 10 fingers simultaneously, which makes the onscreen keyboard easy to use. That said, you’ll obviously want an external keyboard if you’re doing any serious typing. 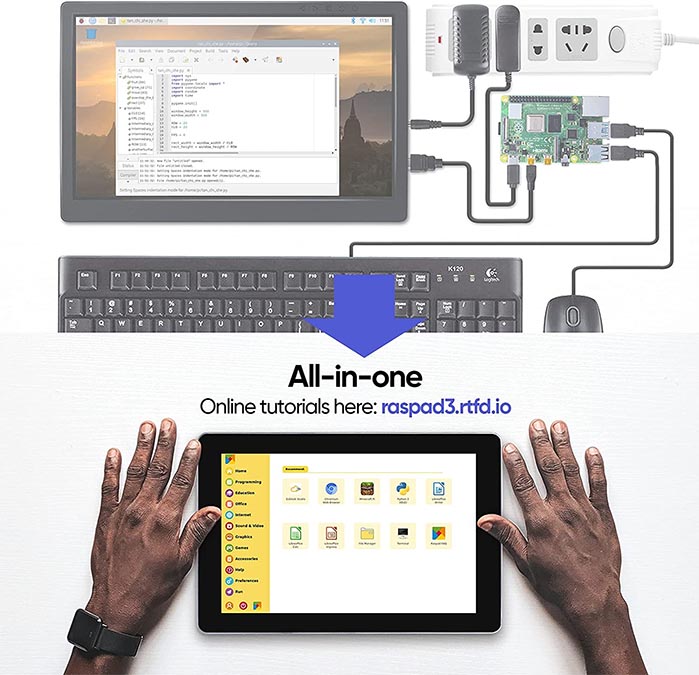 The screen resolution is 1280×800, which is a bit disappointing. It’s better than 720p, but not anywhere close to 1080p. Then again, you don’t buy a Raspberry Pi for mind-blowing graphics. For any reasonable purposes, this resolution is going to be plenty. If you’re a visual artist who relies on higher resolution, you’ll have to spend more. In that case, consider the XP-PEN Artist 13.3 Pro Drawing Tablet instead. It’s a dedicated drawing and artist tablet with mind-blowing graphics. But it has nothing to do with the Raspberry Pi, nor with programming.

In terms of extra performance features, this tablet kit includes a six-axis acceleration sensor. When you change the tablet’s orientation, the screen will flip accordingly, just like your smartphone. This allows you to use third-party stands, turn your screen to portrait mode, and make other changes. There’s also a set of built-in speakers. These aren’t anything special, but they’re good enough for watching YouTube videos when you’re bored. 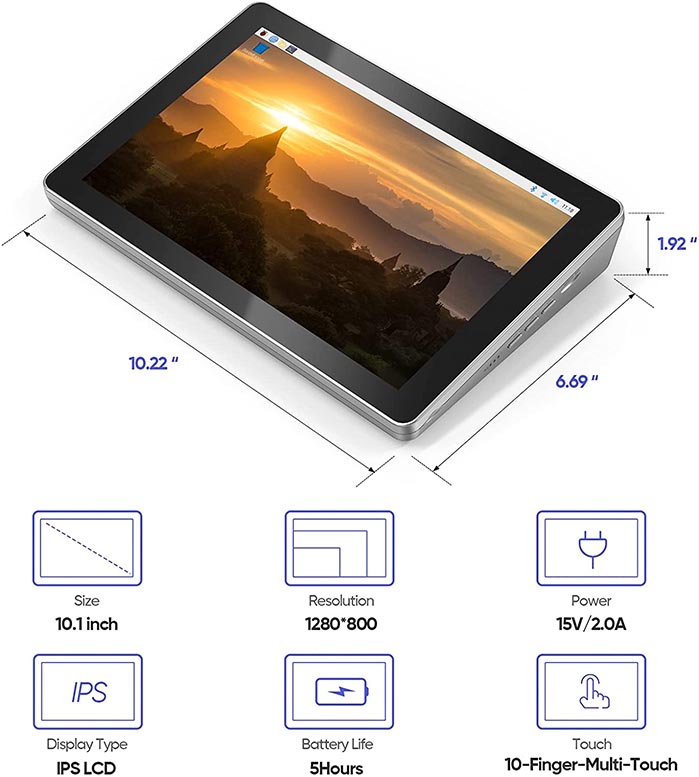 If you want to get the most out of your Raspberry Pi, the SunFounder RasPad 3.0 is a great kit. It includes everything you need to turn your microcomputer into a fully-functional tablet. You can use it for programming, as well as for basic web navigation and streaming. It’s portable as well as durable, and it has a few neat extra features. For example, the GPIO extension and SD slot add more functionality than you get on a base-model Pi. All in all, we were quite pleased.