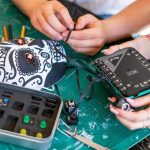 For as long as handheld computers were practical, people have been using them to do new and interesting things. This goes back as far as the days of early do-it-yourself RC cars. Buy a chassis and motor, wire in a small receiver, program the controller, and you’re ready to go. Lego has also played a huge role in this field, producing a variety of computer-controlled kits for serious hobbyists.

For a long time, most people have seen this as just a game. Sure, Battle Bots and other similar shows are fun, but they’re not exactly going to change the world. But with the growing popularity of drones, the importance of small, programmable computers has become more apparent. We’re not just talking about toys anymore. We’re talking about equipment used by photographers, surveyors, and even search-and-rescue teams.

One excellent, programmable microcomputer is the Raspberry Pi. It’s meant to replicate all the functions of a full-sized computer, but at a smaller scale. And with its low price, it’s popular with educators and students alike. If you manage to miswire one and burn it out, or corrupt the firmware, you’re not out a whole lot of money. Still, it’s important to have the right equipment for working with a Raspberry Pi system. We’re about to review the pi-top Raspberry Pi Learning Kits. There are several variants, so we’ll touch on each of them in the most logical order possible. At the end, we’ll summarize what we’ve learned. Let’s begin! 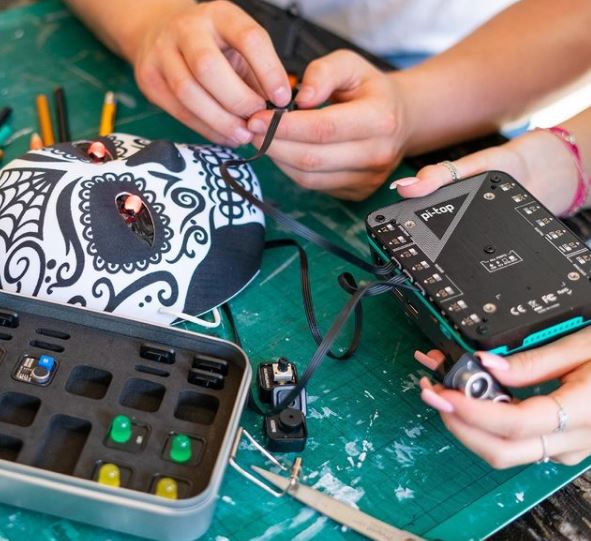 What is the Raspberry Pi?

In the year 2006, the University of Cambridge Computer Laboratory had a problem. Each year, they were getting fewer and fewer applicants, and fewer of the people who applied were actually qualified. If this trend continued, they’d eventually run out of students altogether. Computer scientists Eben Upton, Rob Mullins, Jack Lang, and Alan Mycroft teamed up to develop a small learning computer. Their idea was simple: if microcomputers were more affordable, more people would learn programming. They tinkered with a few ideas, but were unable to successfully develop anything cheap and powerful enough.

The scientists later teamed up with others, and formed the Raspberry Pi foundation in 2008. The goal of the foundation was to find private or public partners willing to develop cheap microcomputers. In 2009, the foundation was registered as a legal charity in the United Kingdom. By 2011, the Raspberry Pi Model B was successfully released. In its first two years, it sold more than two million units, an impressive accomplishment for a brand new system.

Today, the Raspberry Pi is the number three selling computer brand on Earth. The computer itself has about the footprint of a credit card, and measures well under an inch thick. It can be connected via USB or, on newer models, via USB Type-C. It also works with ordinary computer accessories, such as a keyboard and mouse. Anything that connects via USB can be used. By default, these computers use the Raspberry Pi operating system. This is designed for tasks like programming, although you can also perform other computer tasks. You can even watch streaming videos in a web browser. In addition, there are third-party packages for installing Windows 10 if you so desire.

The Raspberry Pi is used by everyone from serious programmers to hobbyists. There are even old-school retro NES cases. Install the right software, and you can use these to emulate your favorite classic games.

Since the original version, there have been several models of the Raspberry Pi. The kits we’ll be looking at today are for the Raspberry Pi 4 Model B. This model was first released in June of 2019, and is the current Raspberry Pi standard. There is a beefier, faster, Raspberry Pi 400, but that is a special variant and not part of the “normal” series. The Model B comes with a 1.5GHz quad-core processor, built-in WiFi and Bluetooth, and Gigabit Ethernet. It also comes with four USB ports, as well as a pair of Micro HDMi ports that support up to 4K resolution. It even accepts USB Type-C power, so it’s compatible with most modern chargers. 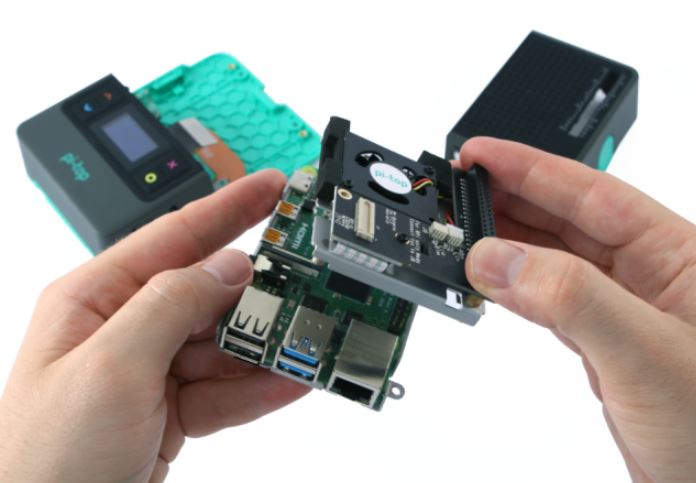 For most people, a barebones Raspberry Pi computer isn’t going to get the job done. If you’re already a tech enthusiast with a bunch of parts laying around, you may be just fine. But for most people, you’re going to want a power supply, mouse, and keyboard at a bare minimum. And for learning, you may want some other accessories. Let’s talk about what makes a good Raspberry Pi kit.

To begin with, at an absolute bare minimum, you need a keyboard and a monitor. This isn’t a TI-84 calculator with its own screen. This is a microcomputer, like a tiny PC tower. With a keyboard and monitor, you’ll at least be able to boot up, get into the OS, and look around. You can perform most functions with keyboard shortcuts, but you really should have a mouse, too. And given the fact that mice are dirt cheap, there’s no excuse not to use one.

But to connect these peripherals, you’re going to need I/O ports. This means one of two things: leaving your Raspberry Pi exposed, or using a housing with external I/O ports. Which ports you need are open to question, but keep in mind what the Raspberry Pi is capable of. Anything more than two USB 2.0, two USB 3.0, and a single USB Type-C port would be superfluous. That said, many cheaper cases — or older ones — don’t even allow you to use the full number of ports. This should immediately disqualify them when you’re shopping around.

That said, a case is really just a starting point. To do anything really useful with your Raspberry Pi, you’ll need some different parts. For instance, some kits come with motors, wheels, and other parts for building a drone or RC car. Other kits come with electrical parts, switches, lights, and other components to be controlled. Combine a few different kits, and you can combine all their parts to create even more complex, smart machines.

As you can see, the quality of your kit can radically affect the quality of your experience. And all of these parts can quickly add up if you’re trying to do a lot of stuff. If you want to save a few dollars, a Raspberry Pi 3 B+ is a bit cheaper, albeit slightly slower with less RAM. We’ve already reviewed starter kits for this earlier variant of the Raspberry Pi. 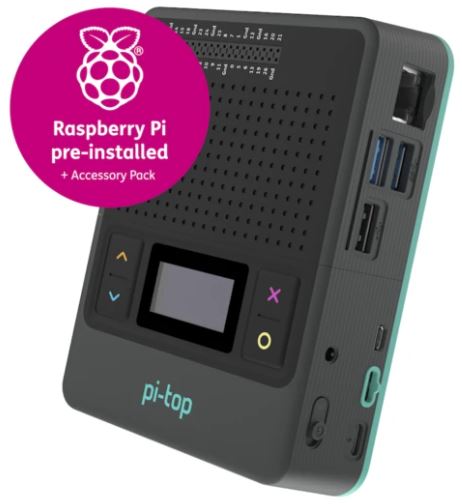 Pi-top offers two different versions of their Raspberry Pi Learning Kit: the Complete Version and the DIY Version. The complete version is what you’re generally going to want if you’re a complete newbie to the Raspberry Pi system. It comes with a brand new Raspberry Pi 4 Model B, already installed in a sturdy housing. This housing nearly doubles the size of the unit, but adds some useful functionality you’ll probably need. Most significantly, it boasts an internal power supply with five hours of battery life. This makes the Raspberry Pi a truly mobile computer, since it doesn’t need to be plugged in. The power supply also provides pass-through power, so you can use the computer even while you’re charging. 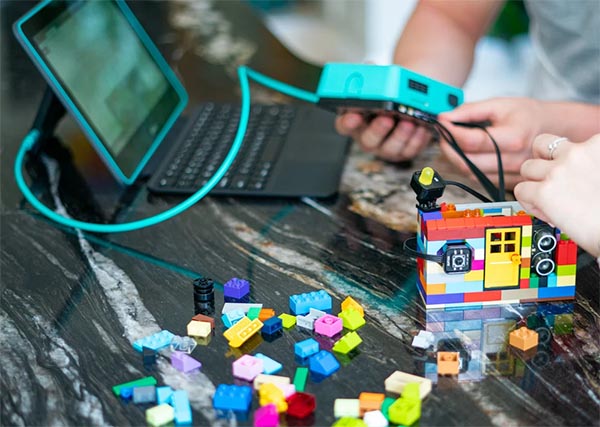 This case is well-engineered, with a sturdy polymer housing and all the ports located on one side. There are three USB Type-A ports, with the fourth ported over to a USB Type-C port. This Type-C port will function as USB 3.0, but is still quite useful for connecting USB Type-C peripherals. There’s even an additional Micro USB port for plugging in your smartphone or other small devices. An Ethernet port and a simple on/off power switch occupy the rest of the side of the housing. The top sports an LCD screen, along with basic controls for viewing the power and connection status. All of this is compatible with Lego, Grove Components and most other popular systems, right out of the box. 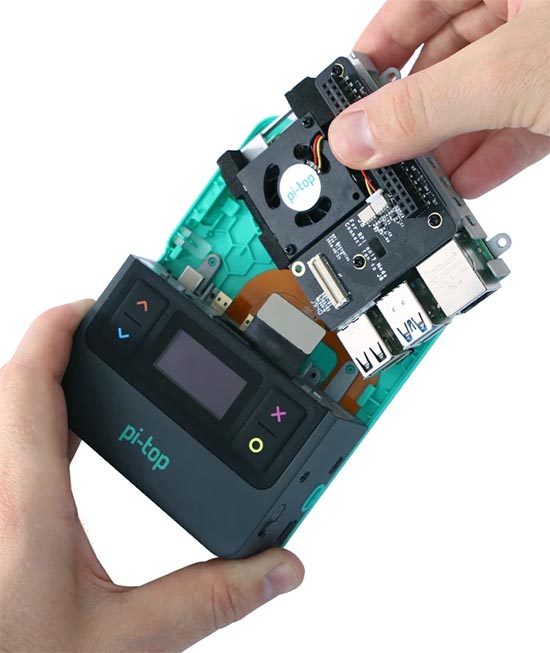 The DIY Version of the pi-top kit is almost the same, but it doesn’t include the actual Raspberry Pi system. This is a better choice for advanced users who already own a Raspberry Pi and want to save money. You get the housing and all the needed connectors, and assemble the system for yourself. 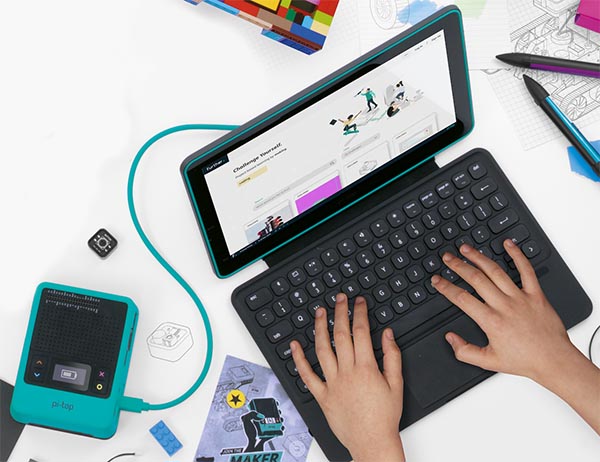 Pi-top also offers some extra accessories for getting the most out of their base kit. To begin with, there’s a Touch Display and Bluetooth Keyboard package. This package includes a laptop-style keyboard-and-monitor unit, with a removable screen. You can use the two halves separately or all together, depending on your task. It’s also a touchscreen display, so you can use it as a tablet if you want. 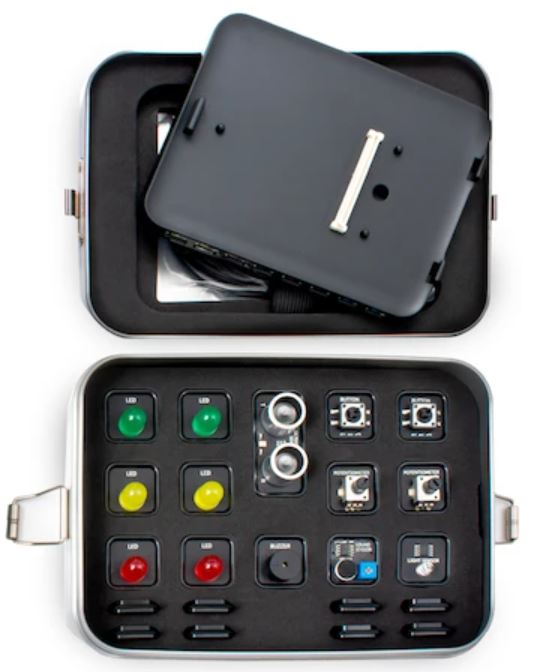 Another useful kit is the Sensor Foundation Kit. As its name implies, this is the base pi-top kit for getting kids comfortable with programming. It includes 14 different components, beginning with a “Foundation Plate.” This is a wired platform where you can connect other components and start programming. In addition to the Foundation Plate, there are a number of parts that can be plugged in. This includes a handful of LEDs, switches, a bell, and a switch. Think of it like an old-school beginning electrician’s kit, except it’s fully programmable. 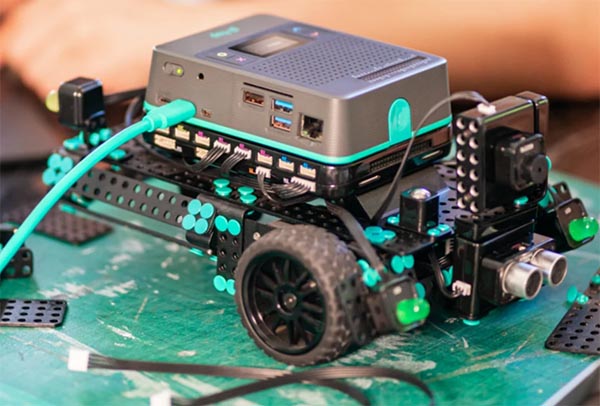 If your tastes run more on the practical side, consider the pi-top Robotics Kit. This kit includes a motor, servos, wheels, and a frame for building a small RC vehicle or drone. It also comes with a wide-angle camera for viewing your environment. If you’re trying to program a smart drone, you’ll have all the tools you need.

As you can see, the various pi-top Raspberry Pi Learning Kits have a lot to offer. Whether you’re a beginner who needs a starter kit or a power-user who wants a robotics kit, you’ll be well-equipped. Our only complaint is that if you want a truly versatile Raspberry Pi system, you’ll need to buy multiple kits. Still, given the modular nature of programmable microcomputer systems, that’s true with any manufacturer.