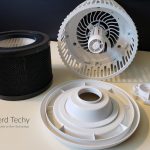 If you’re concerned about the quality of your indoor air, you’re not the only one. To our parents and grandparents, air quality was more or less a non-issue. First off, they had bigger health issues to tackle, like Polio. Secondly, awareness of air quality just wasn’t the same as it is today. For instance, as recently as the 1960s, doctors’ associations were endorsing various brands of cigarettes. If that happened today, people would be horrified.

But indoor air quality concerns aren’t just a matter of increased awareness. They’re also a more relevant concern than ever. Not too long ago, houses were poorly insulated, if they were insulated at all. Outside air could easily seep in around windows and doors, or even through cracks in the wall. Because of this circulation, there was no opportunity for indoor air to get stagnant. Even if you had mold or dust in the house, it would cycle in and out. And without air conditioning, people’s windows were open more often than they are today.

The most obvious solution to this problem is to use an indoor air purifier. Today, we’ll be reviewing the TaoTronics HEPA Air Purifier. This choice may seem like it comes out of left field. TaoTronics is mostly known for headphones, earbuds, and other audio equipment. What in the world do they know about building a HEPA air purifier?

We’re about to find out. First, we’ll look at the physical construction of the unit itself. Then, we’ll talk about how you use it on a day to day basis. We’ll wrap up by talking about the filtration system, and what it can remove from your air. When that’s done, we’ll have enough information to render a final verdict. Let’s begin! 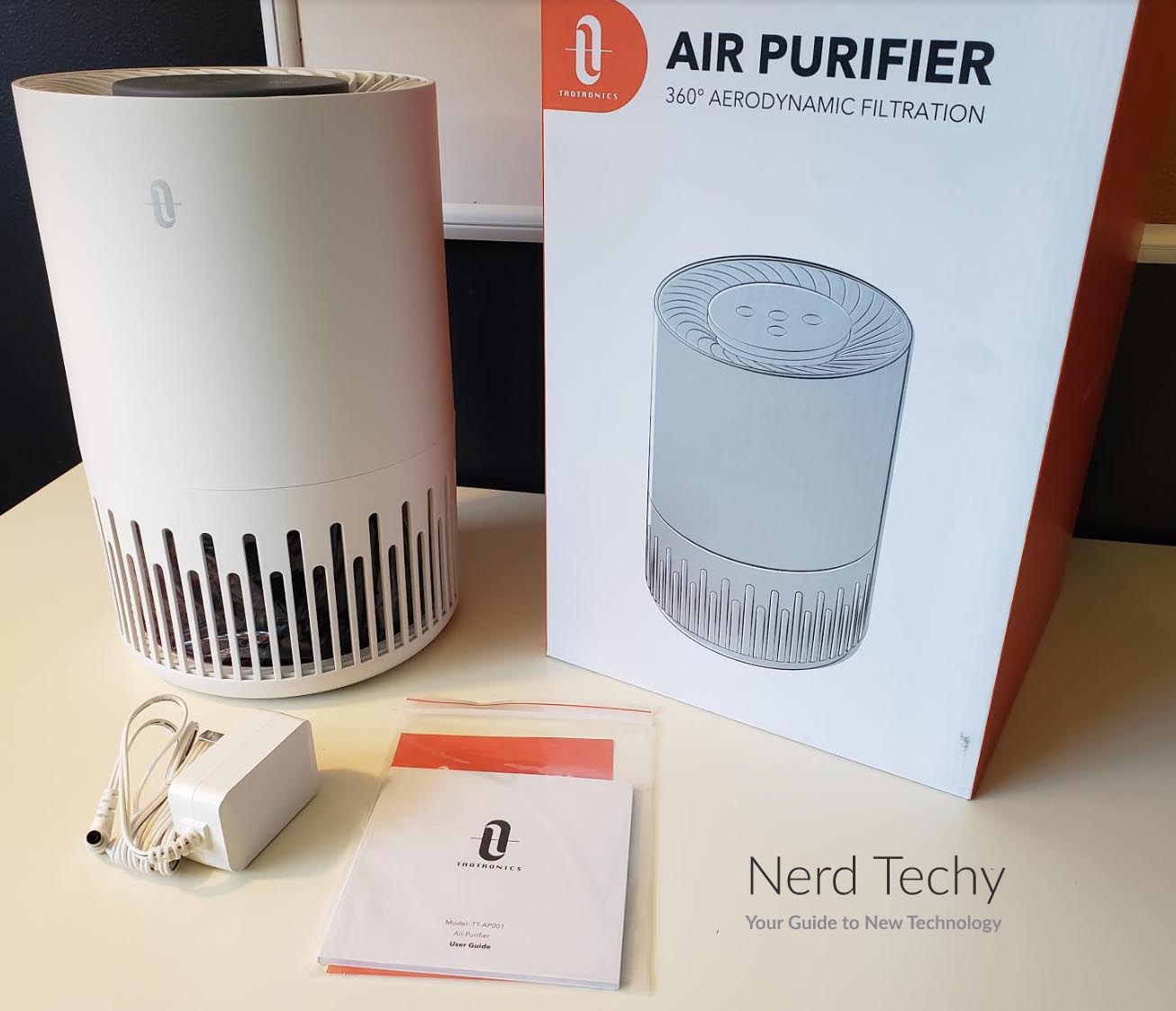 The TaoTronics HEPA Air Purifier is a cylindrical unit, much like many home air purifiers. It draws in air from the bottom of the base, sucks it through the inner filter, and expels it through the top. This is an efficient design, and also allows for better distribution of clean air. For instance, some filters suck air in through one side and blow it through the other side. That design allows for a more compact unit, but doesn’t distribute air well. Instead, the spiral top of the TaoTronics filter distributes clean air evenly. The drawback of this design is that it doesn’t work well if it’s sitting against a wall. For optimal air distribution, it should have plenty of clearance on all sides. 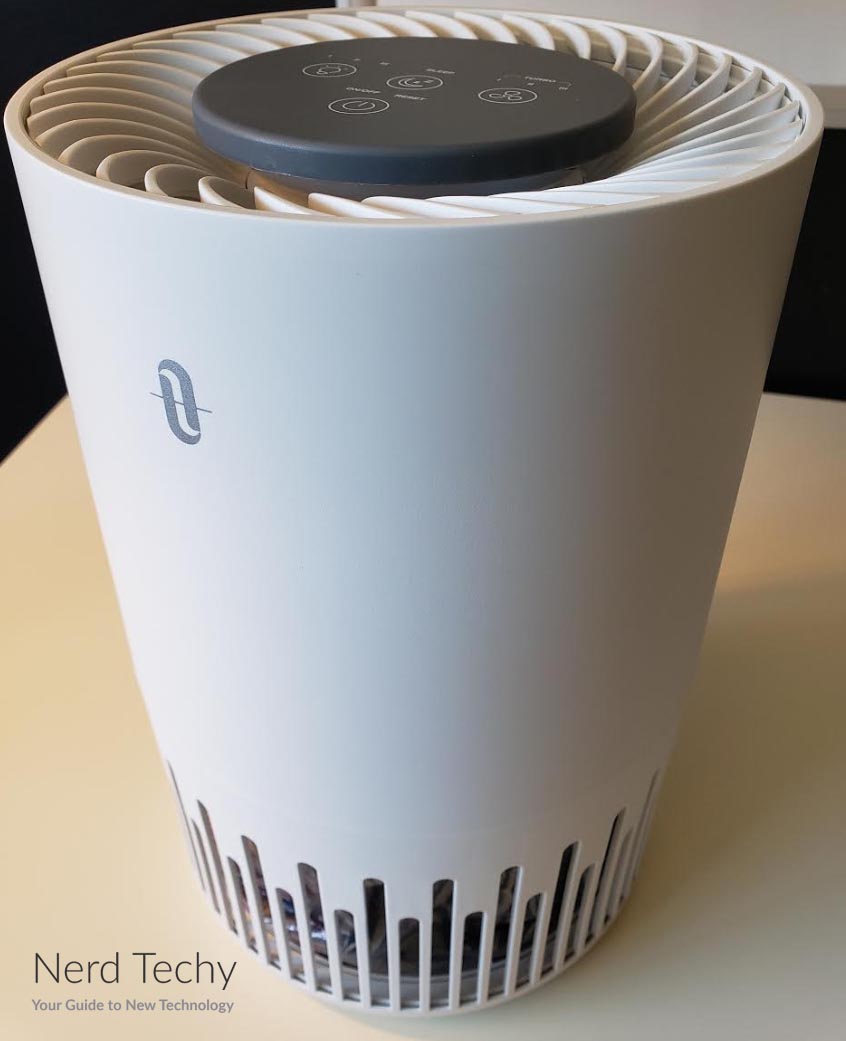 The unit itself measures 10.6 inches in height and 7.6 inches in diameter. As such, it’s relatively compact, and won’t take up much space on your counter or tabletop. It’s also relatively light, tipping the scales at just 3.3 pounds. For a stationary unit, this isn’t that much of a benefit. On the other hand, if you want to move your filter from room to room, it’s easy to do. You can carry it in one hand without stressing yourself out. 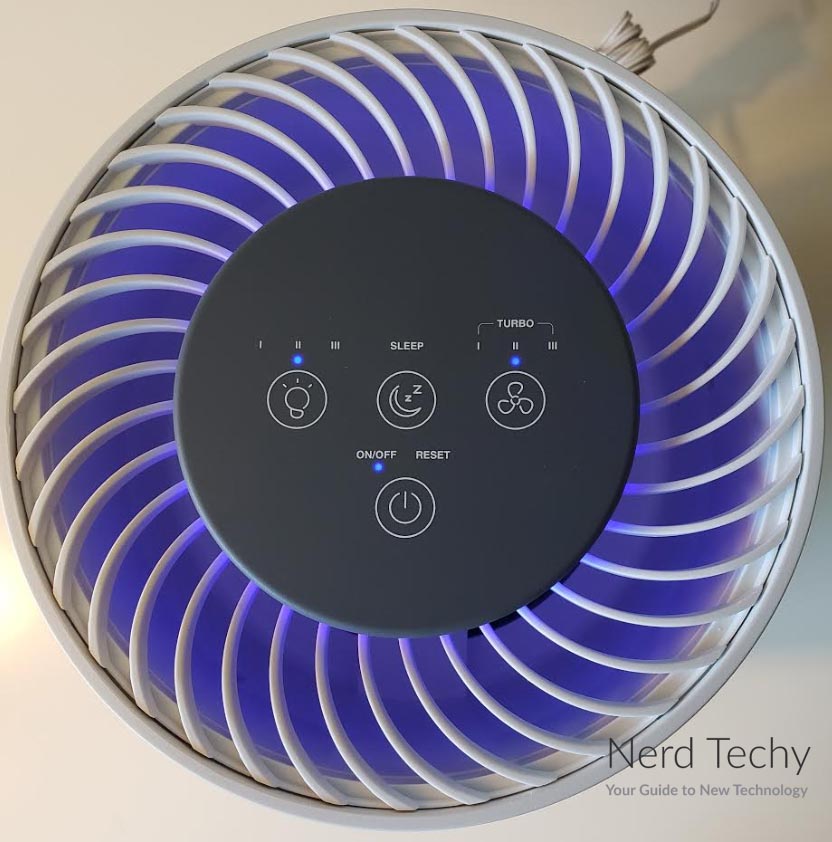 The case is constructed from ABS plastic, with a matte finish that’s easy to keep clean. It’s available in black or white, to match virtually any home décor scheme. The top and bottom edges are rounded, which means there are no sharp edges to deal with. If you bump your filter, it’s not going to dig into your skin. The bottom vents consist of a series of vertical slits, with varying heights that give the filter a modern look. On top, the outflow vents have a spiral pattern. This creates a vortex in the outflowing air, ensuring even distribution.

Also on the top, you’ll find all the TaoTronics HEPA Air Purifier’s controls. The control scheme is relatively simple, with only four buttons needed for operation. To begin with, there’s a simple power button with an LED indicator light. This button also doubles as a filter indicator. A secondary light will illuminate when the filter needs replacement, and the fans will automatically shut off. Once you’ve changed the filter, simply press and hold the button to reset the indicator. To the left, there’s a light button, which cycles through three different LED lighting levels. In the top center, a sleep button activates the filter’s sleep mode. Finally, to the right, there’s another button to select the fan speed. 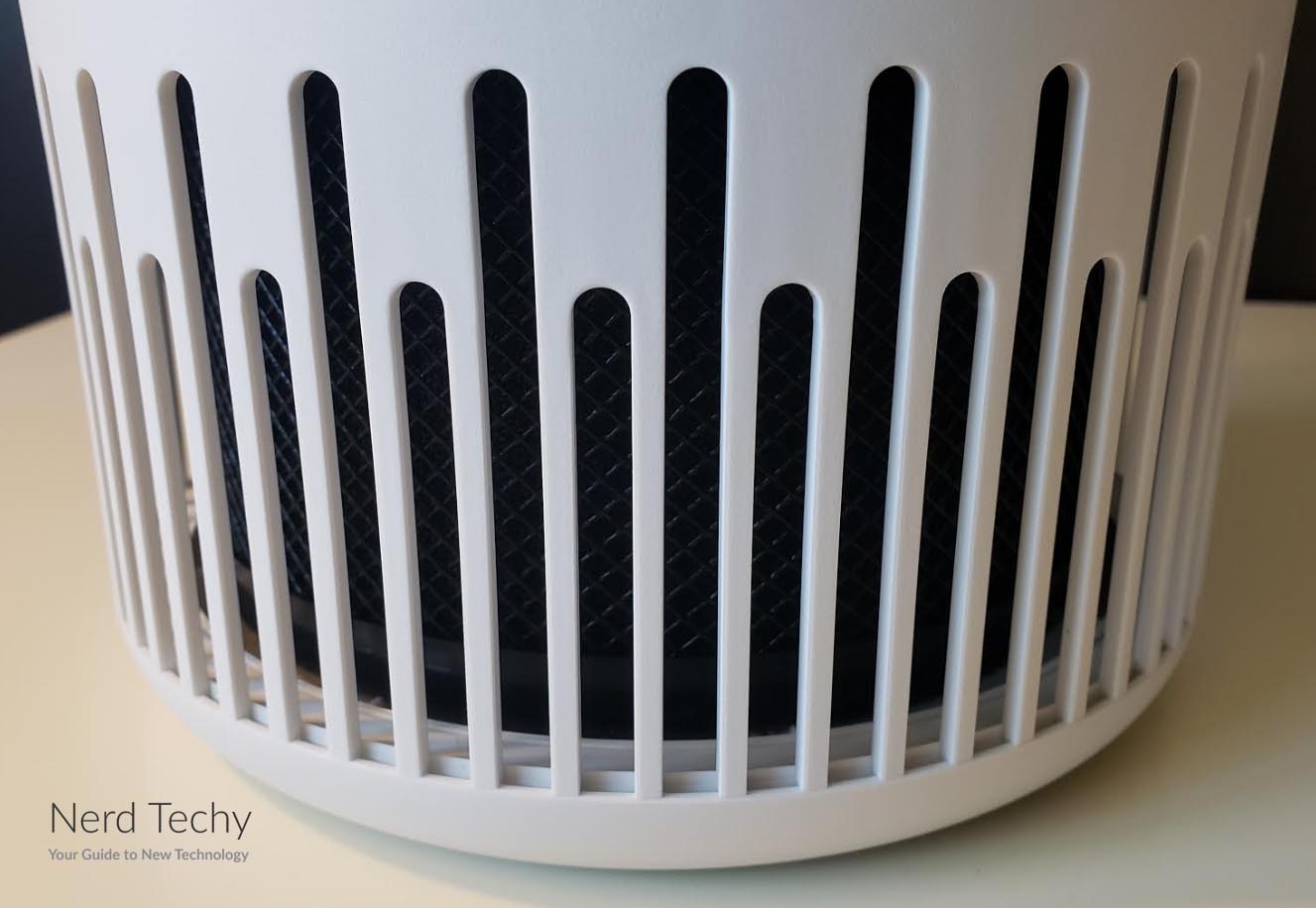 The case comes apart in the center, which makes it easy to change the filter. Simply unscrew the top from the bottom, pull the top off, and you’re ready to go. There’s a flat plastic plug that secures the filter in place. It pulls out easily if you slip your thumbnail under the edge. Be aware that when you first receive the unit, the filter will be wrapped in plastic for shipping. You’ll need to open it up and remove the plastic first in order to use the filter. 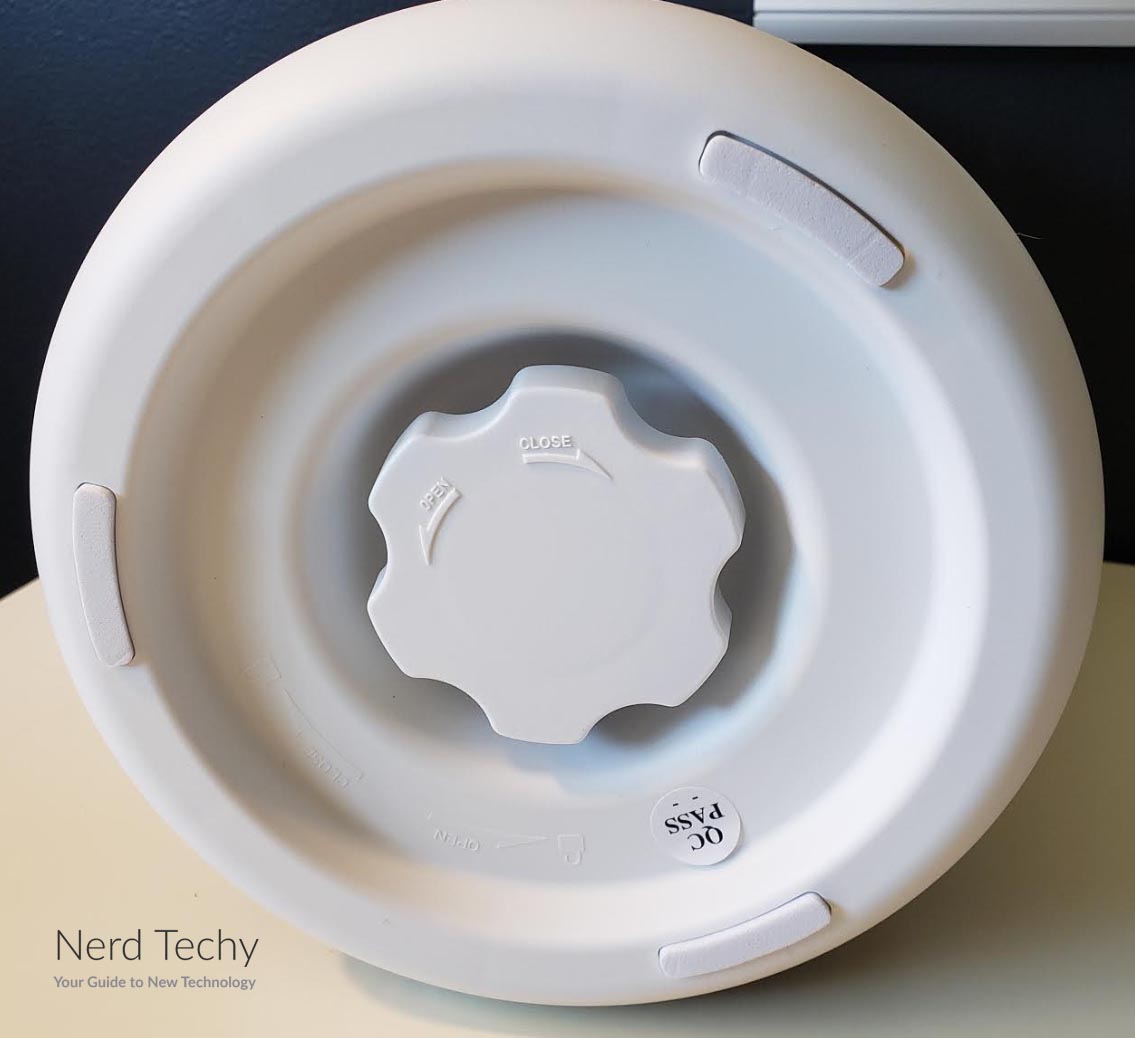 The TaoTronics HEPA Air Purifier has a maximum capacity of 150 square meters per hour. In practice, this means it can effectively treat a room of up to 161 square feet in size. As such, you’re looking at a moderately-powerful air purifier. It’s not going to handle your whole house. But for a small to mid-sized bedroom, it’s going to be more than good enough.

To compliment its bedroom use, the TaoTronics purifier has a built-in sleep mode. Pressing the sleep button will activate this mode, so bedtime is not going to be a hassle. In sleep mode, the LED light turns off, and the fan drops to its lowest setting. At this level, the fan will have a volume of only 25 decibels. A human whisper is about 30 decibels, so this is extraordinarily quiet.

In total, you have four different fan speed options. At the highest level, the filter is rather loud. However, it’s also much more powerful. The best option is to run the fan on high before you go to bed. Then, you can scale things back when you’re ready for sleep. Moreover, you can turn the light on or off independently from sleep mode. It’s a soft blue, which means it won’t disturb most people’s sleep. But if you have trouble sleeping to begin with, turning it off is probably a good idea. Either way, it’s nice to have the choice. 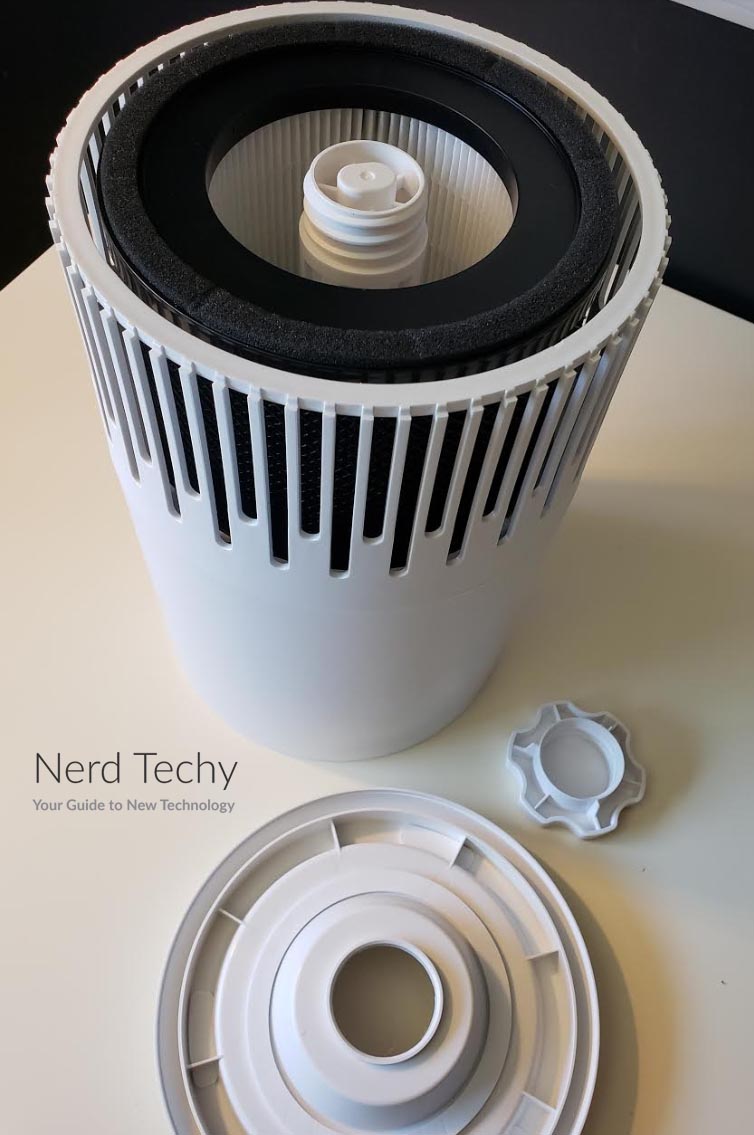 The TaoTronics HEPA Air Purifier utilizes a three-stage filtration system. This is more or less standard for HEPA purifiers, since it’s a tried and true method. The outer layer is simply a mesh pre-filter. This layer is designed to remove large particles, such as animal hair and big pieces of dust. It keeps the main filter from getting clogged by larger contaminants. As a bonus, it’s easy to clean. If it gets clogged, simply wipe it down with a damp cloth or paper towel and you’re good to go. 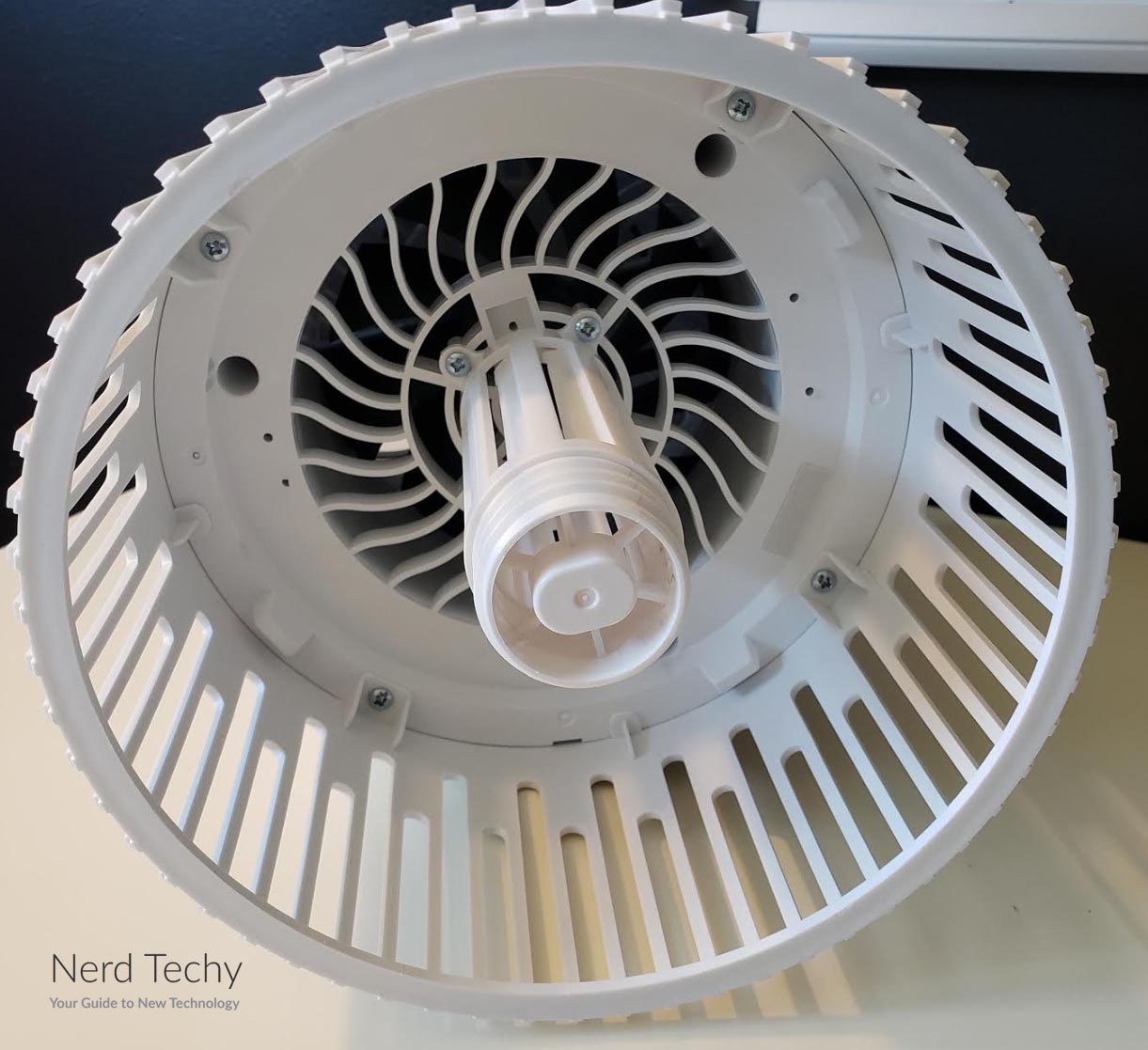 The next layer is a true HEPA filter, which has an accordion-style design. This shape will be familiar to anyone who’s ever used an air filter, even a furnace filter. This is the portion of the filter that does the bulk of the work, removing most contaminants from your air. It’s also the part that gets dirtiest fastest under most circumstances. Thankfully, it’s integrated into a cylinder with the third layer, which allows for easy replacement. 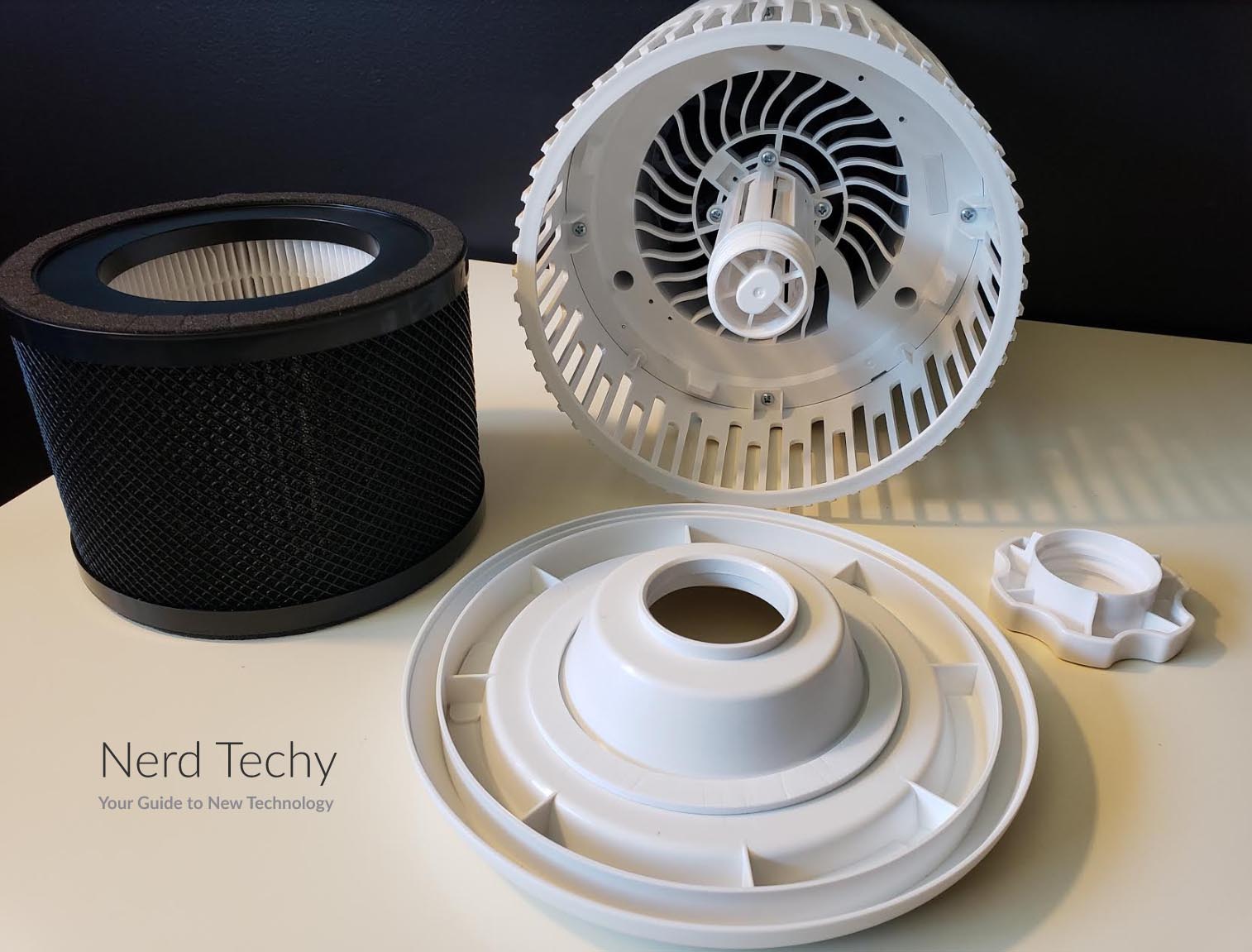 The third layer consists of activated carbon. This layer doesn’t remove any particulate matter. Instead, it’s engineered to remove chemical contaminants, VOCs, and odors. It ensures that your air isn’t just free of particles; it also smells clean. The carbon and HEPA layers will need replacement every 3 to 6 months, so make sure to be prepared. 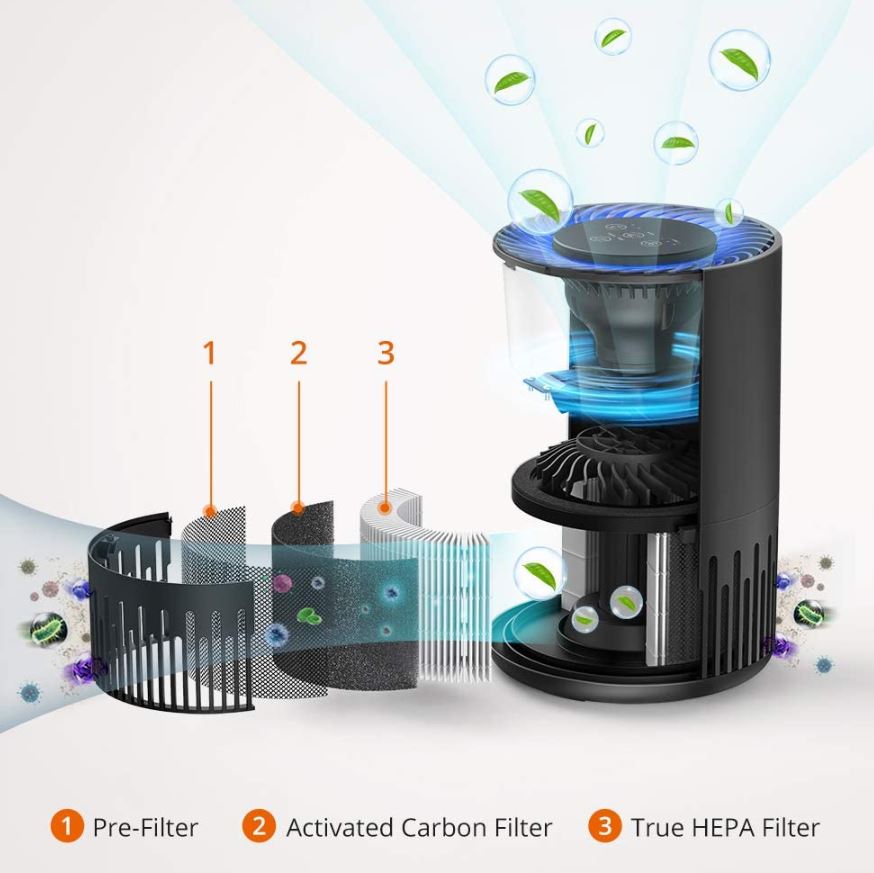 What Does the TaoTronics HEPA Air Purifier Remove?

So, what does the TaoTronics HEPA Air Purifier actually remove? As we already established, the outer pre-filter removes large contaminants, but this is a given. How well do the other two layers perform? 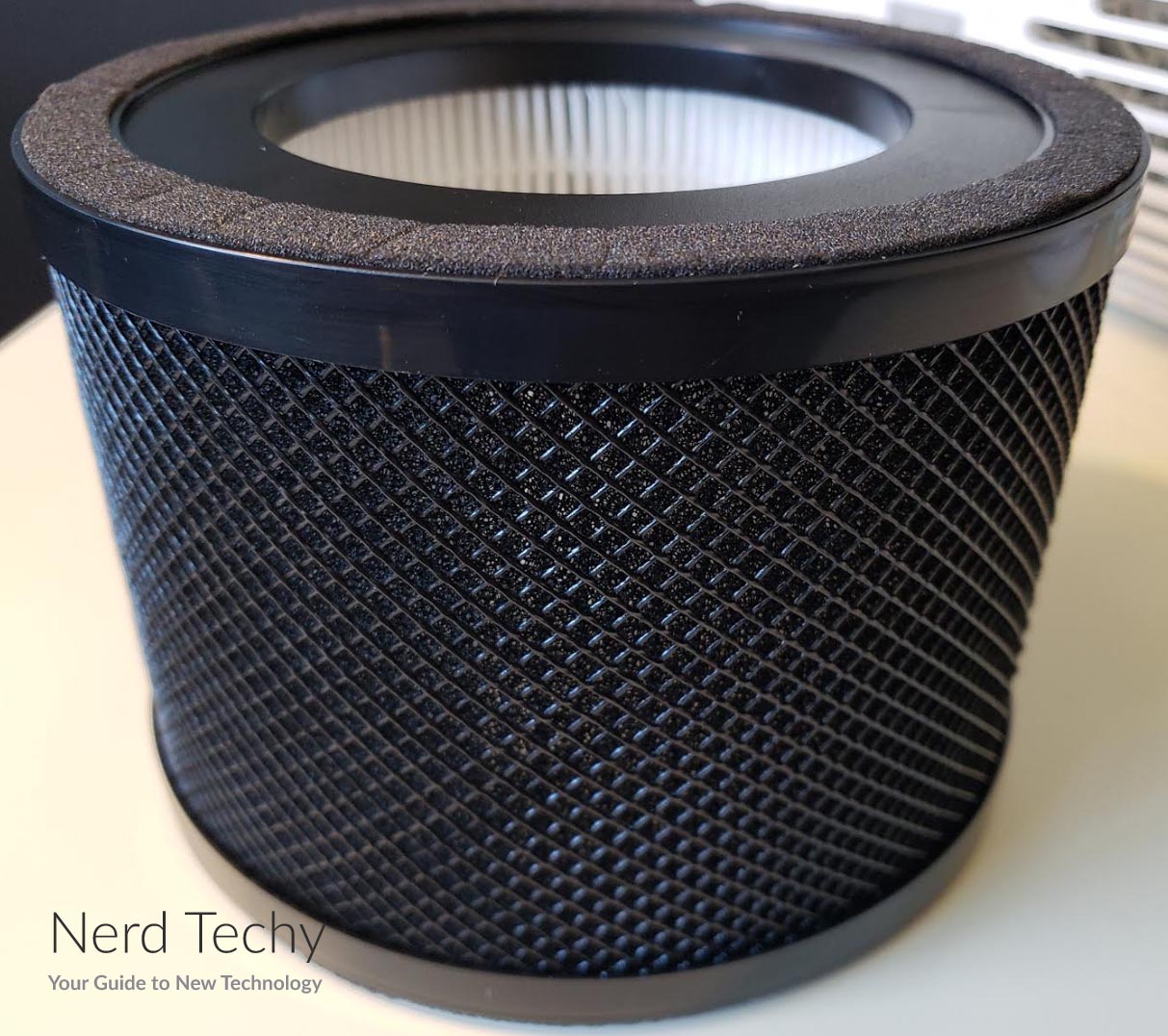 The HEPA filter is where the magic really happens. This layer removes 99.97 percent of particles down to 0.3 microns in diameter. At this size, you’re looking at the majority of allergens. Within this range, you’ll find small dust particles, animal dander, pollen, and mold spores. If you suffer from allergies or allergy-induced asthma, you’ll experience significant relief. In addition, the filter will trap most bacteria, as well as larger smoke particles. 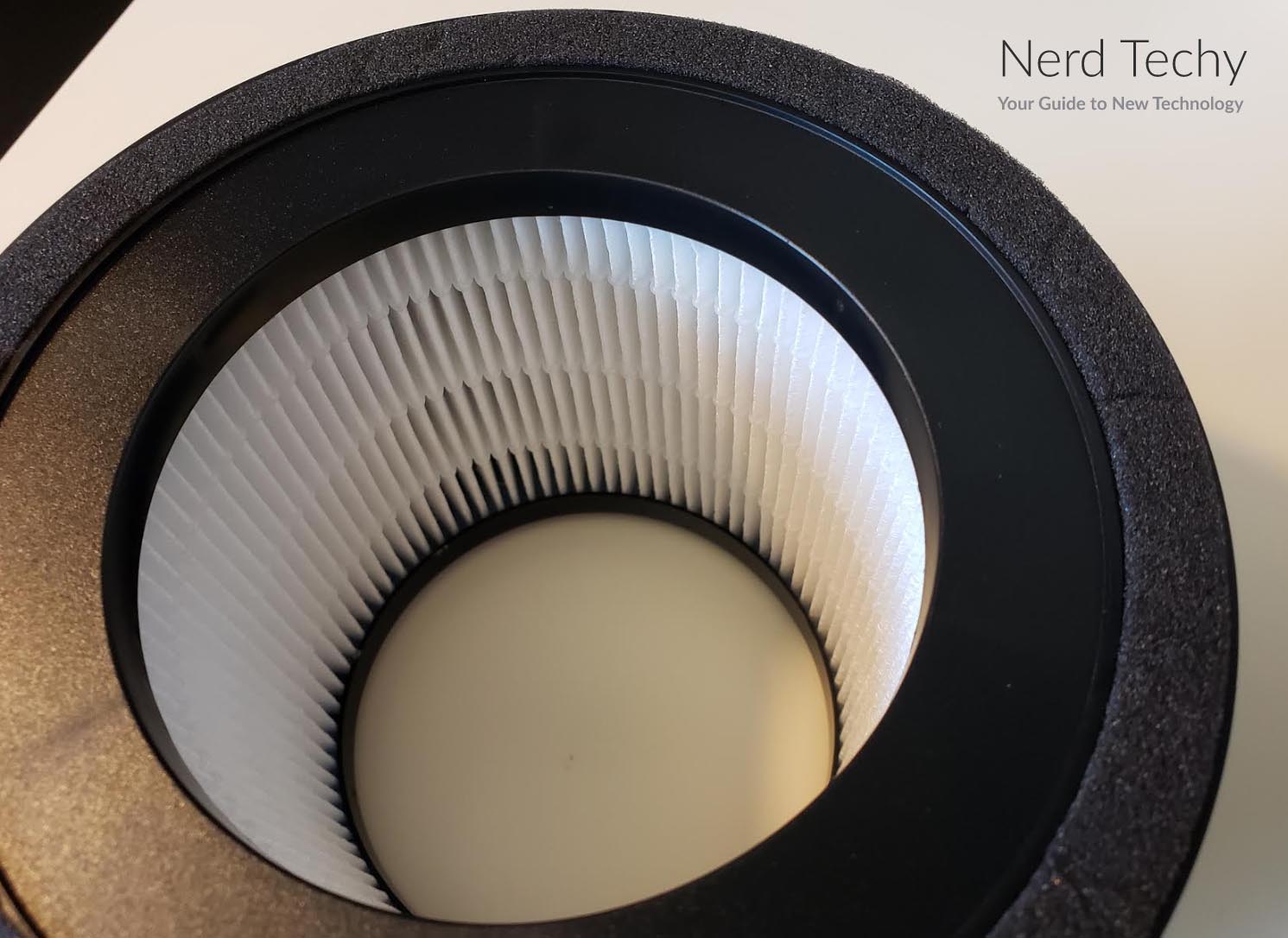 The inner activated carbon layer removes a significant amount of other irritants. For instance, a lot of upholstery outgasses formaldehyde for years after purchase. Activated carbon will absorb this chemical, along with many others, leaving your air clean and pure. Moreover, activated carbon also absorbs many household odors. If you have cats, you won’t have to smell the urine from their litter box. And if you like to cook with garlic, it won’t stink up your house. It will even remove the smell of tobacco smoke, if not the negative health effects.

As you can see, the TaoTronics HEPA Air Purifier is one of the most powerful small filters on the market. Admittedly, its main limitation is that it will only treat a small area. This isn’t a whole-house filter, or even a living room filter. It’s a bedroom filter, and should be treated as such. That said, when it’s used in a small room, it’s more than good enough to get the job done. The HEPA filter will remove most allergens, and the activated carbon layer does the rest. No matter what you need to remove, you’re looking at a solid option.

In addition, the unit itself is very well constructed. It’s compact, so it can be placed just about anywhere. And the filter is easy to change. By unscrewing the top of the unit, you can change the filter cylinder in just a few minutes. The buttons are easy to understand and easy to operate. With multiple fan speeds, you can get exactly the balance of performance and noise that you need. Finally, the sleep mode is a great extra touch. With the touch of a button, you can reduce the volume and light so you can get some rest.