The first few generations of 1080p televisions were nothing short of expensive. Even a modestly sized 30” screen could cost nearly a thousand dollars. Over the next decade, resolutions got bigger, screens grew larger, and prices went down. It’s taken a long time for 1080p to stop being special, and start being standard. But unlike 1080p, the switch to 4K is going to happen far more rapidly than you might think.

That’s because 4K televisions are already starting to get cheap. Given matching screen sizes, an increasing number of 4K televisions now have the same cost as their 1080p counterparts only a couple of years ago. While the 4K format is still young, the fact it’s already starting to get inexpensive means it will replace 1080p in only a matter of years, regardless of consumer enthusiasm for 4K content. And the latest line of UHD TVs from TCL is a giant leap in that direction.

Though you may not know the name, TCL is the world’s third largest manufacturer of televisions. And with their new Class 6 series, it may not be long until TCL does become a household name. It’s fair to say the 6-Series could be the best value 4K TV of the year. It’s available in two sizes: 55” (55R617) or 65” (65R617). 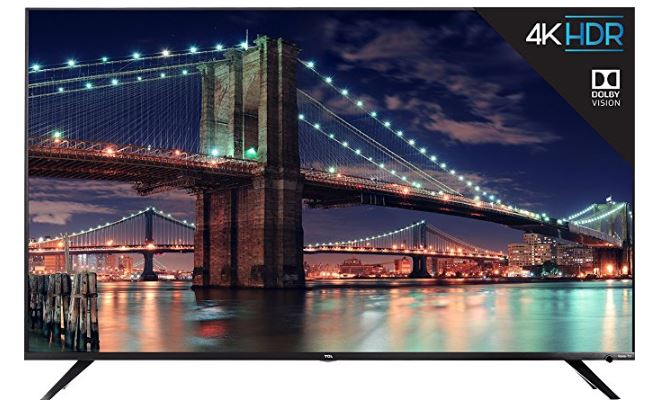 It’s not hard to imagine why TCL chose these sizes. As 1080p televisions became cheap, people began purchasing giant screens. Now we’re all accustomed to larger screen sizes. These days, plenty of people look at a 40” television as being on the small-side. And when you’re making the change to 4K, you don’t want to feel like you’re downgrading your screen size.

Relative to the size of these panels, the 6-series has a stunningly low price. But it would be a grave mistake to think these are budget-oriented monitors. The TCL Class 6 Series have plenty to offer. From a distinctly sharp image quality to full-fledged smart TV features, this machine has just about everything. 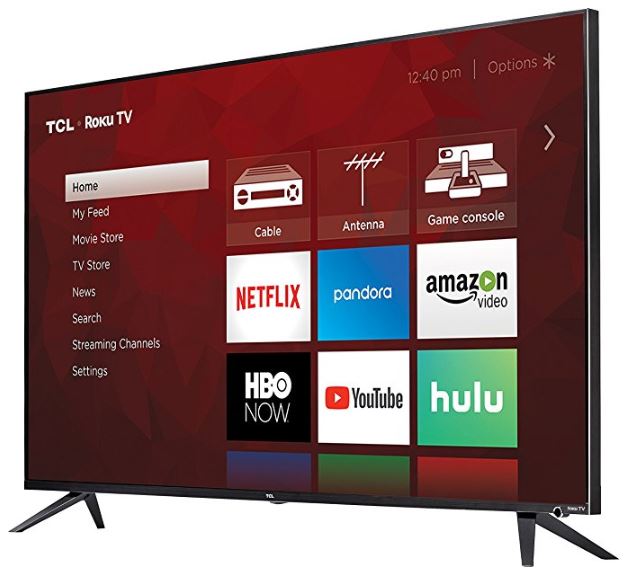 Advertised screen sizes are measured diagonally, which isn’t much help when you’re trying to figure out how much space a TV will take up. TCL’s 55-inch version (55R617) stands at 48.5 x 28.1 x 2.9-inches, not including the stand. Like you’d expect, the 65-inch version (65R617) is about ten inches larger, standing at 57.1 x 32.0 x 3-inches. Adding the stand to either set adds another eight inches of height, and two inches of depth.

One thing to notice about the stand is that it uses a claw-like design, which protrudes each leg forward and backward from the set. This design provides a stable support for panel, but it does have a downside. Because the legs are positioned the edges of the screen, the TV needs to be placed on a surface that’s slightly longer than the length of the full screen. That can be avoided by wall mounting, but for people who don’t intend to mount their television, furniture length may be pushed to its limit. 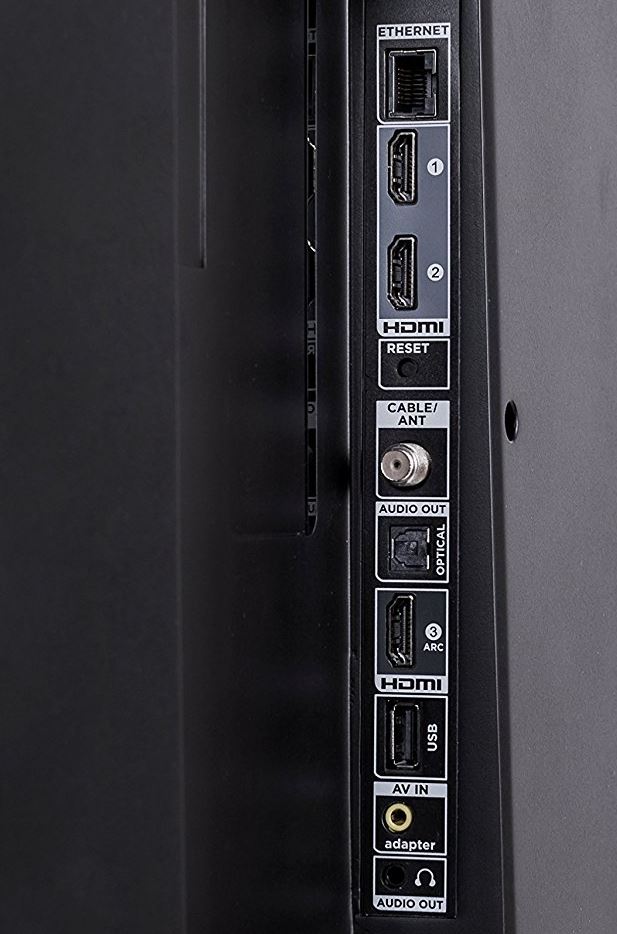 Along the backside of either panel, you’ll find three HDMI 2.0a ports, each supporting HDCP 2.2. There’s also one HDMI ARC input, one USB port, one composite port, an RF jack, headphone jack, and optical audio out. In addition to the standard Ethernet port, that’s a relatively ordinary assortment of connections. The only noteworthy thing is the relatively short supply of USB connections.

Like the previous version of TCL’s panels, the 6-Series supports Dolby Vision and HDR10 for a fully immersive audio experience. Though the speakers on the panel itself are about average for built-in TV speakers, the native support encourages you to connect the panel to an at-home audio system.

Typically, the remote control isn’t something you would highlight as a feature for a TV. But the 6-Series remote is far more special than anything you may be used to seeing. To begin with, the remote includes a microphone enabling voice commands. You don’t even have to be able to find your remote, as long as it can hear you. With commands like “launch Netflix” and “switch to Game console”, you may never have to spend much time in physical contact with the remote.

Another feature that makes this remote exceptional is its use of radio frequencies to communicate with your TV. Most TVs make use of infrared, which requires a more-or-less direct connection with the sensor on the receiving TV. That’s why most remotes have to be pointed directly at the set, and why the radio frequency used by this remote allows you more freedom.

The physical build of the remote itself is incredibly simple. The play button is large and easy to find, and the buttons are brightly color coordinated to make navigation easy. And using TCL’s mobile app, it’s possible to turn your own mobile devices into a remote, and them use those devices to plug in your headphones for listening to your TV.

The best feature of the 6 series is its uniquely advanced image quality. It achieves that by helping boost black levels and color contrast, which are the two essential quality markers of a home-theatre. And that’s especially true for content with a high dynamic range. TCL manages to do that by separating their screen into smaller numerous zones, which allow those zones to be brightened or dimmed with a greater degree of precision. 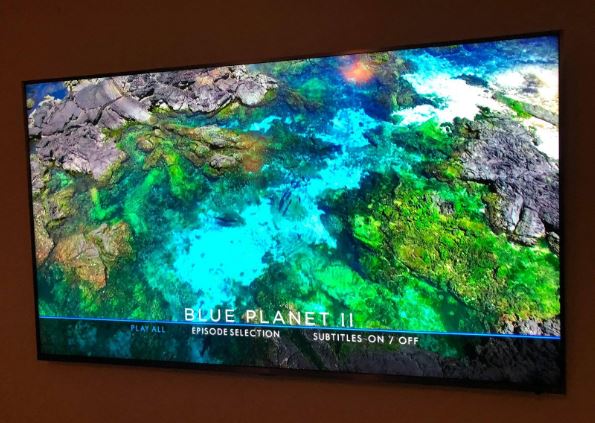 There are 96 separate zones in the 55-inch version (55R617), and as many as 120 in the 65-inch version (65R617). From a technical perspective, the resulting 12,667:1 contrast ratio is 300% superior to anything else you’ll find in this price range. That’s because with competitors like Sony and Samsung, their highest picture quality features are usually reserved for their most expensive models. Similar full-array dimming TVs, like the Sony X900F, usually costs thousands.

Moreover, the TLC is capable of a wide color gamut. It uses nano-band phosphor technology to push color accuracy close to the DCI-P3 standard, making it perfect for HDR content. Accordingly, TCL included some new HDR settings in the 6-Series which you can use to adjust your TV for viewing dark scenes in brightly lit areas, or vice versa. Color reproduction is critical to image quality, and the NBP Photon tech allows for far more color space than you’ll see on almost any panel in this price range.

It’s worth noting, whether or not you’ll find the 6-Series a substantial improvement over your currently TV mostly depends on what you watch. Many of the features that make the 6-Series offer such a great picture quality is better dimming, but better dimming isn’t always going to improve the quality of your picture. The lighting conditions in your room, the content you’re watching, and the settings you select all have an impact on performance. Some content can come out looking much better, some content can come out looking the same as what you’re used to seeing.

4K televisions are becoming popular, but it’s probably not because consumers are itching for higher resolutions. The reason more and more people are getting 4K TVs is probably because they offer far more than ordinary TVs used to offer. Modern 4K televisions come with a variety of premium smart TV features, like native support for streaming services, which are the features driving adoption more than anything. 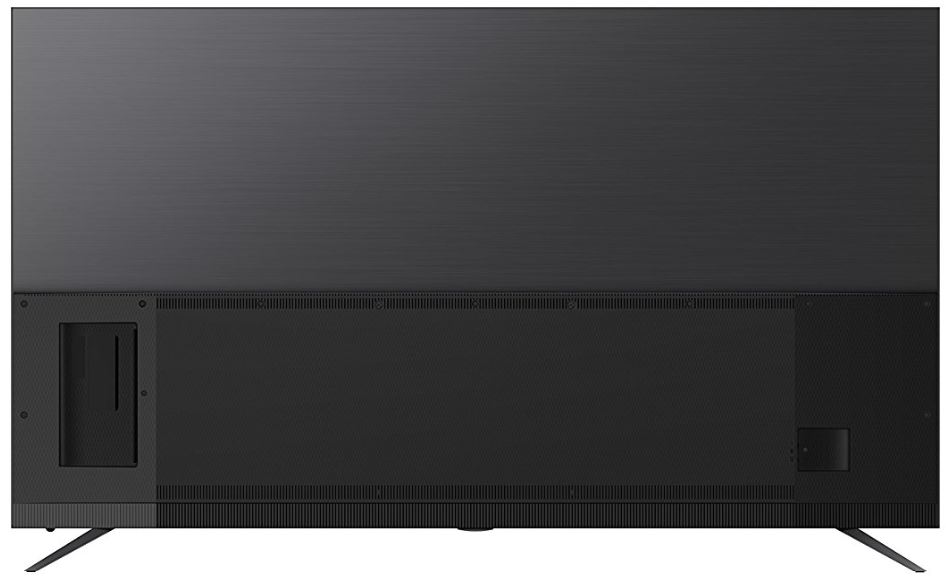 And when it comes to smart features, TCL is poised to tear its competitors apart. For starters, the 6-Series uses the Roku operating system. Among the various OS used by major brands, it’s easy to say Roku has the best app selection and overall ease of use. It provides a huge content library from the moment you plug in your TV, as well as access to an equally large selection of subscription streaming services like Amazon Prime Video and Netflix. And more than a 4K picture, those are the things people tend to care about.

While the 6-Series sets have some obvious strengths, there are some minor drawbacks to consider. The claw-foot design of the stand can be punishing unless you intend to mount the panel. The panel itself operates on a 60Hz refresh rate, which produces more motion blur than you’ll see with a 120Hz panel. Odds are, you’re already using a 60Hz panel. But if you’re someone who’s adopted a higher resolution panel and found the difference compelling, a 60Hz panel could be a deal breaker.

The relatively limited availability of USB slots is unfortunate, but not as bad as it might seem at first. Roku provides a full range of streaming services, which probably means you won’t need to use a USB slot for some type of streaming service box. The lack of a headphone jack is another small problem, but one that can be remedied by connecting to the set with a jack-laden smartphone or tablet. 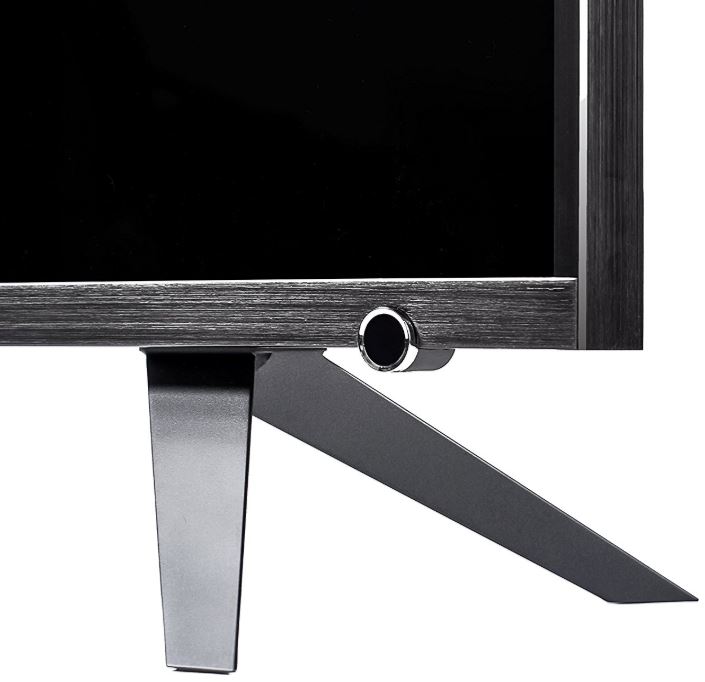 Who Should Choose the TCL Class 6 Series?

If you’re thinking about replacing an old TV, the Class 6 series (55R617 & 65R617) presents an excellent opportunity to upgrade. They’re a great choice for home theaters, thanks to a deep contrast ratio and formidable color quality which allows a favorable comparison with some of the best screens on the market. That’s because the 6-Series offers features you typically don’t see in this price range.

If you’re been looking for the right time to adopt 4K, the TCL Class 6 series is where plenty of people will be getting on board. Relative to their size, these panels are stunningly inexpensive. The only group of people who may want to hold off on upgrading is competitive gamers. The 6-Series has much less input lag than comparably 4K panels, which makes it strong for casual gaming, but the 60Hz refresh rate does set some limits for serious players.

As the centerpiece of a home theatre, the TCL Class-6 Series is an easy choice. Its use of HDR allows you to go beyond the limits of the standard dynamic range, allowing you to literally see more than you can on many 1080p panels. With the right viewing conditions, HDR content gets close to rivaling what’s usually only possible in a theatre. Whether you’ve got high expectations or you’re just looking for an upgrade, the 6-Series can probably deliver for you.