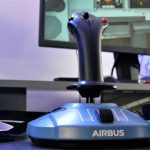 For most gamers, finding a good control scheme is easy. If you’re a console gamer, for instance, the stock Xbox or PlayStation controller is going to be your go-to. At most, you might choose a third-party controller with different ergonomics. PC gamers, meanwhile, have plenty of choices. You can choose from hundreds of mouse and keyboard options. Whether you want a chunky mechanical keyboard or a lightweight chiclet keyboard, the market has you covered. Similarly, you can use anything from a compact mouse to a large gaming mouse with a dozen buttons.

However, flight sim enthusiasts face a unique challenge. After all, the point of a flight simulator is to feel like you’re actually flying the aircraft. A simple keyboard and mouse are about as immersive as tapping on your smartphone with your finger. Instead, you want a set of realistic airplane controls. This is a relatively niche market, with few quality manufacturers. One of these manufacturers is Thrustmaster. They’re well known in the flight sim community, producing everything from sim hubs to fighter control sticks.

Today, we’ll be reviewing the Thrustmaster TCA Sidestick Airbus Edition. This is a replica sidestick that’s designed to look and feel just like a real Airbus sidestick. More than that, it’s part of Thrustmaster’s TCA ecosystem. This means that you can seamlessly integrate it with other controllers from the same TCA ecosystem. That’s all well and good, but how well does it actually perform? Will it keep you flying high, or will it leave you high and dry? We’re going to take an in-depth look, and tell you everything you need to know. Let’s get started! 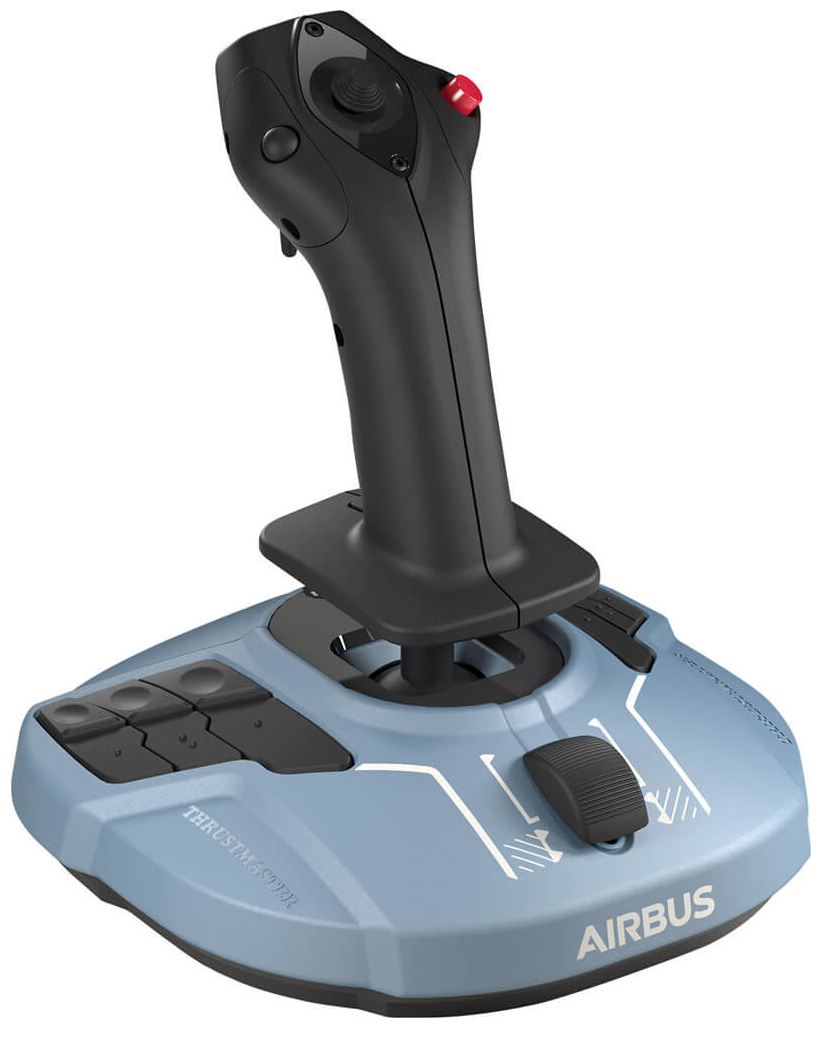 The Thrustmaster TCA Sidestick Airbus Edition is a 1:1-scale replica of the Airbus A320 sidestick. As such, it’s fairly beefy, measuring nearly 12 inches from base to tip. This includes the base itself, so it’s not as big as it sounds. The stick is well-sized for most people, although people with very large or very small hands may find it awkward. Nonetheless, this sizing provides for a comfortable grip for the majority of people. More to the point, it’s authentic. If you were to hop into an actual Airbus cockpit, the control stick would look and feel the same. 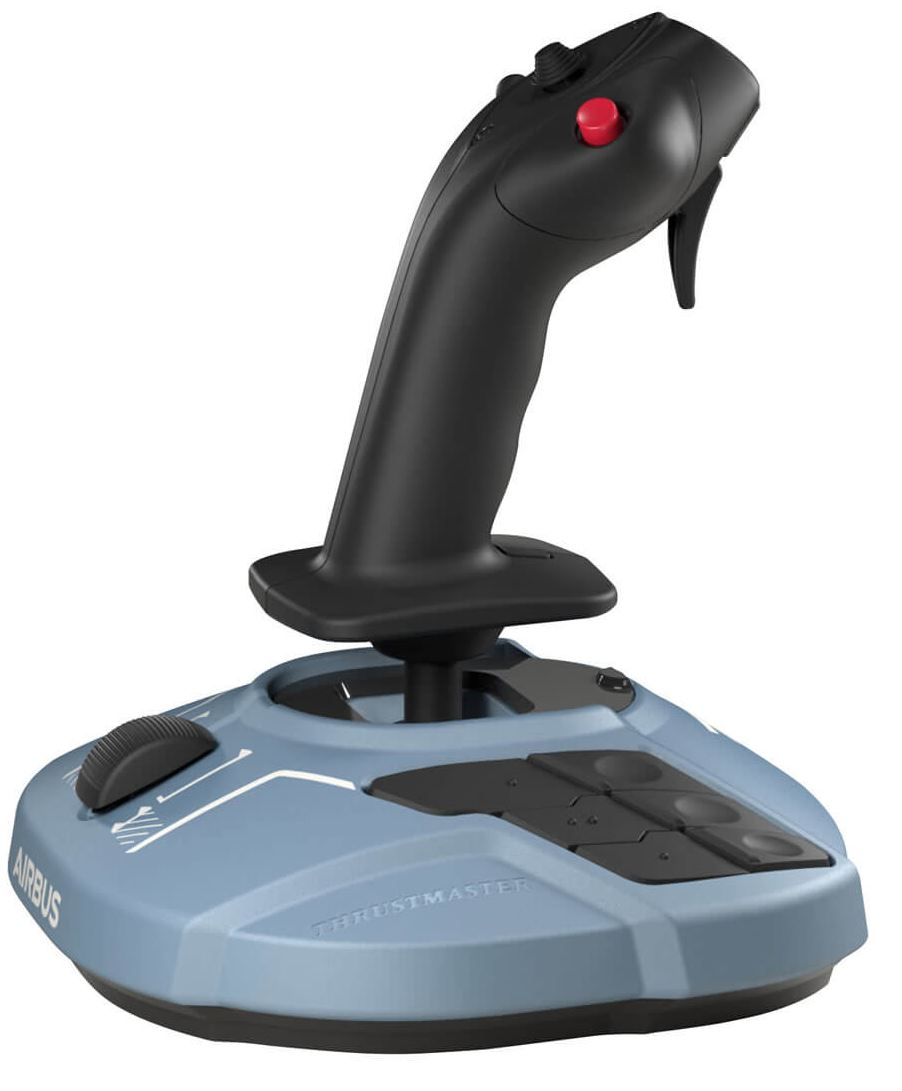 With that being said, the TCA Sidekick has one feature that makes it a bit more convenient for home use. It comes with two heads, which can be swapped in just a couple minutes. One of these heads is left handed, and the other is right handed. As a result, if you’re left handed, you don’t have to worry about operating the sidestick with your right hand. Because the head includes both the trigger and the control buttons, this is more or less a complete swap. Everything is ideally placed for your dominant hand, without any artifacts left over.

Both the stick and the base are constructed from a durable injected polymer. It’s not metal, but neither is the sidestick on the actual A320. Moreover, this polymer construction is far more durable than your average ABS plastic controller. It can withstand a few drops, bumps, and bangs without cracking or splitting. 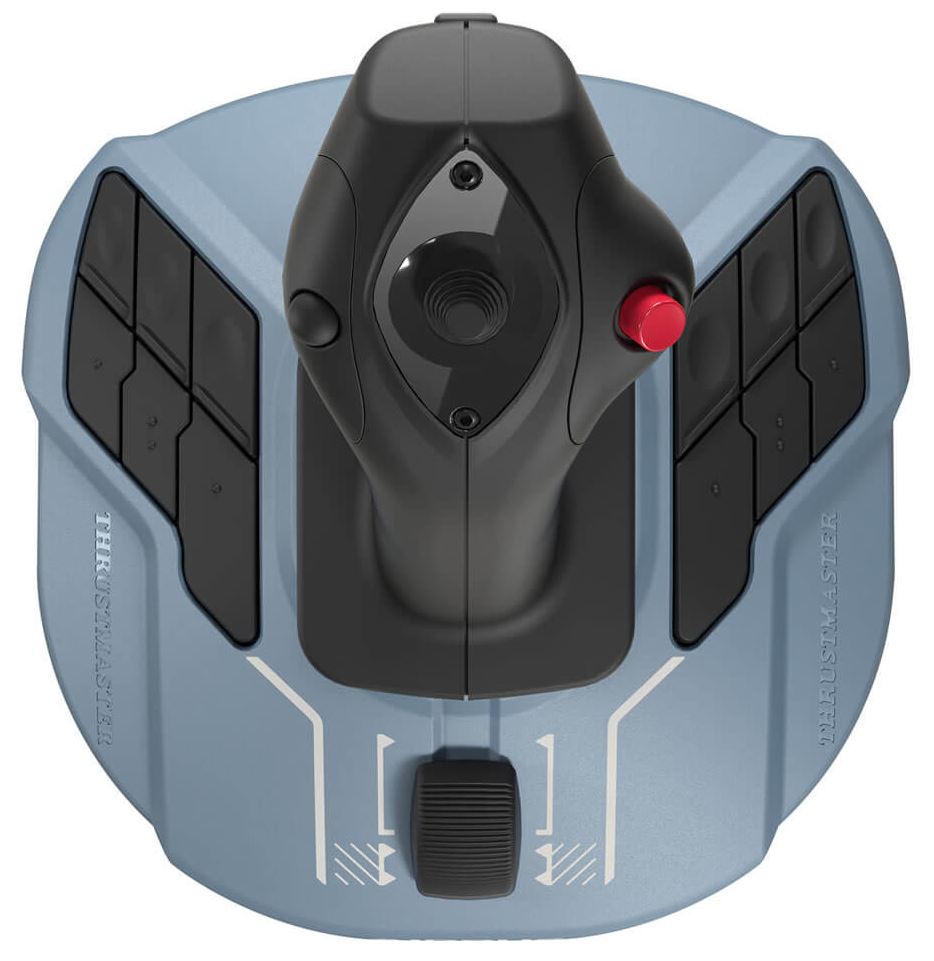 The stick itself is black, with a textured matte finish that’s tough to scuff and easy to grip. It also has a wide flange above the base, providing a comfortable place to rest the edge of your palm. In total, there are 17 different buttons, controlling most of the airplane’s functions. These include the trigger on the stick itself, as well as three buttons on the top and sides of the stick. To either side, on the base itself, there’s an array of six additional buttons. These buttons have textured, braille-style finishes that allow for easy touch identification when you’re focused on the screen. The final button is a toggle that’s positioned behind the stick, with reverse and forward sections clearly marked. 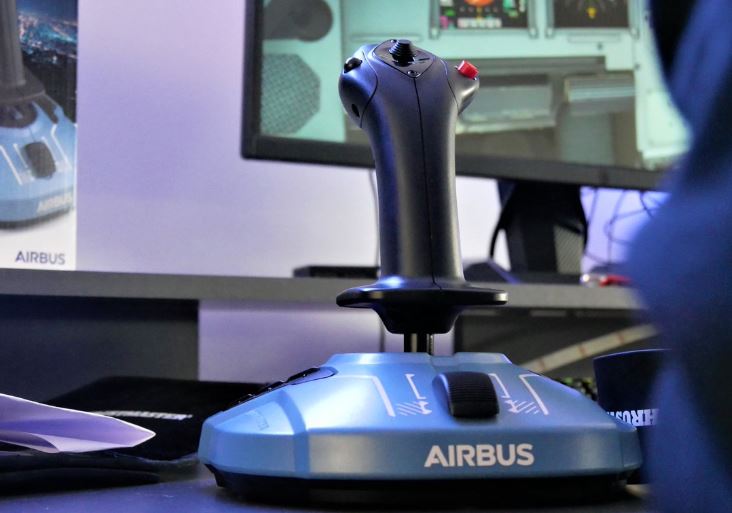 The TCA Sidekick’s buttons can be reconfigured easily before each gaming session. There are three default configurations: pilot, co-pilot, and a central position for solo flight. Regardless of your role, the Sidekick will easily meet your requirements. 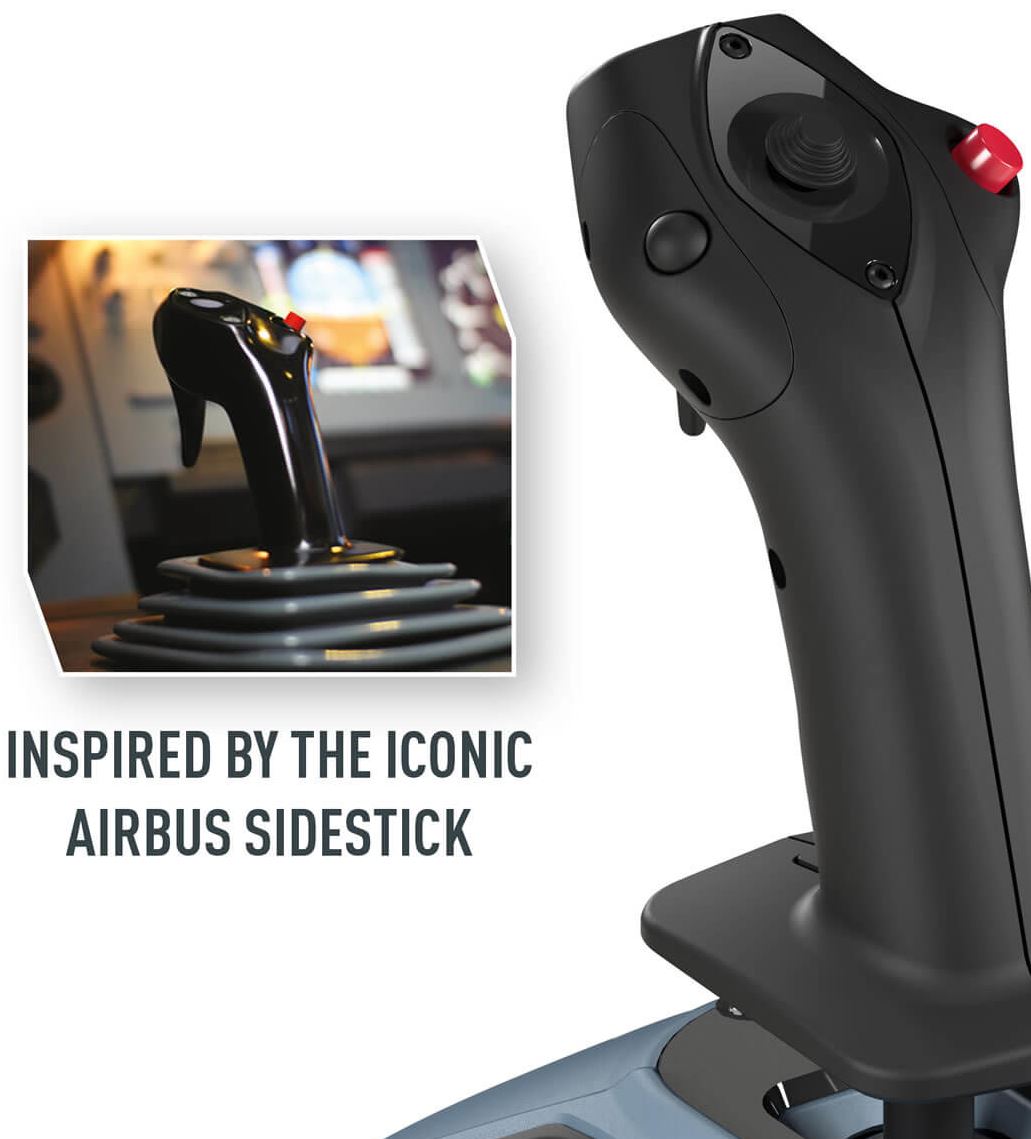 The base itself is a powder blue, providing a nice contrast to the black stick and buttons. The finish is matte, to match the stick. However, there are glossy Thrustmaster logos on either side that are understated and not distracting. Underneath, you’ll find a set of rubber skids. These skids provide plenty of grip, which prevents the control stick from sliding around even during intense use. They also have a low profile, which keeps the center of gravity as low as reasonably possible. 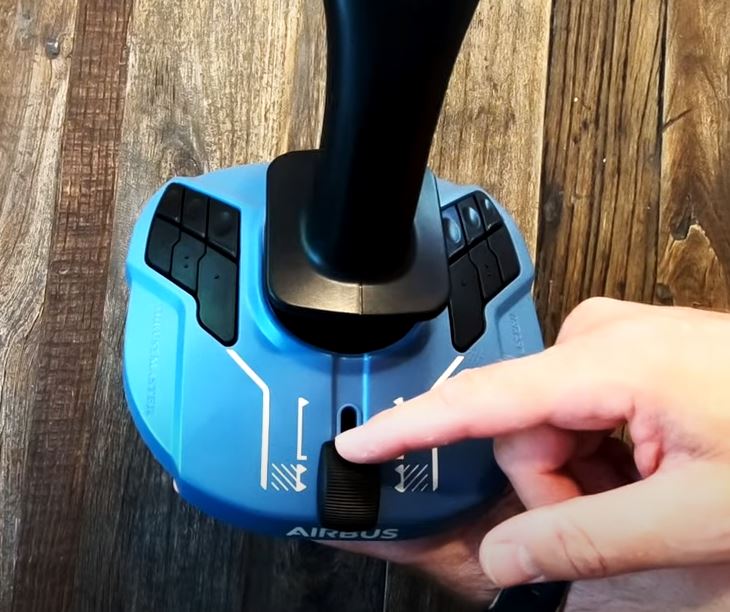 The main attraction of the control scheme, obviously, is the control stick itself. This is where the majority of the action happens, and it’s the part you’ll use most frequently. By default, it controls pitch, yaw, and roll. Considering that these are the most common things you’ll need to control, you’re already looking at a great controller. 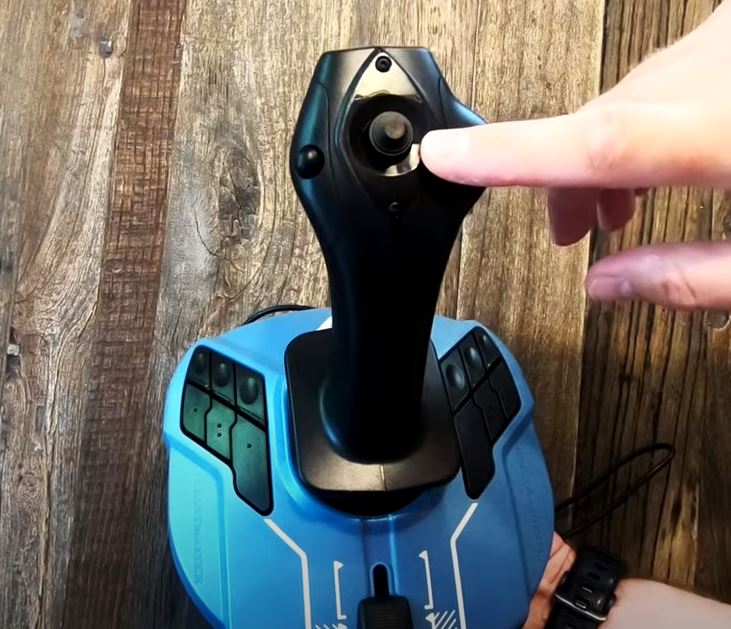 Now, considering that the control stick only has two axes, you may be wondering how it controls three movement types. The answer is that the trigger engages the rudder. Normally, when you move the stick from side to side, you’ll be rolling the plane. Pull the trigger, and you’ll control the yaw instead. Not only is this easy to master, it’s also how an actual A320 control stick works. There’s even a locking mechanism which can keep you in rudder control mode until you want to roll the plane. Once again, you’re looking at a very authentic flight controller.

The TCA Sidestick’s control stick is also exceptionally sensitive. It utilizes Thrustmaster’s H.E.A.R.T. system, which stands for Hall Effect AccuRate Technology. If this sounds a bit vague, let’s clear things up a bit. Instead of using mechanical potentiometers, the H.E.A.R.T. system uses contactless magnets for sensors. This means you don’t have to worry about mechanical contacts affecting the feel of the controls. Instead, the stick moves smoothly through all four axes, with only the natural, built-in resistance. Moreover, it allows for very fine levels of control. The magnetic sensors provide 14-bit resolution, so they can sense 16,384 different positions. This is far more sensitivity than you’ll get from a mechanical set of sensors. It feels very smooth, replicating the analog feel of the A320’s analog sensors. 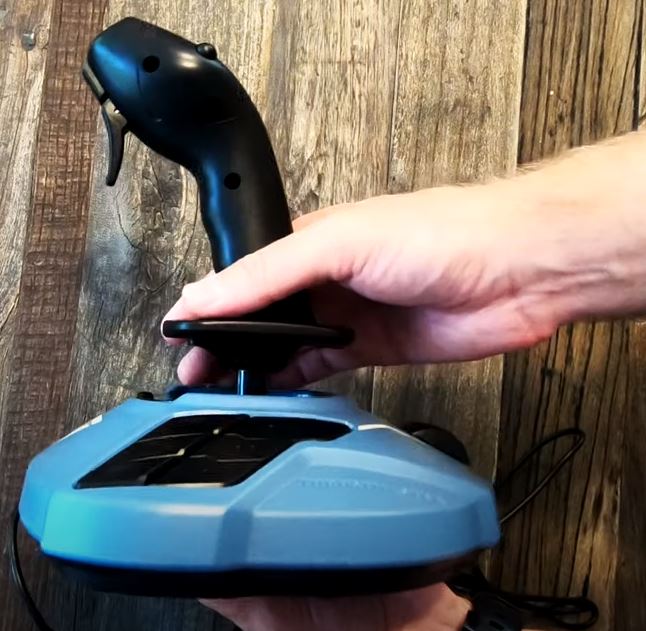 Of course, there are many other functions involved in controlling an airliner besides pitch, yaw, and roll. To meet those needs, the 12 action buttons are crucial. These buttons allow you to raise and lower the landing gear, activate the autopilot, and other functions. In most flight simulators, you’ll use a default layout that’s specific to that simulator. However, those controls are also remappable, which we’ll talk about more in a second. Not only that, but you get a thrust reverser toggle at the bottom. This is a very useful feature, and it’s downright essential if you’re not using a control quadrant. 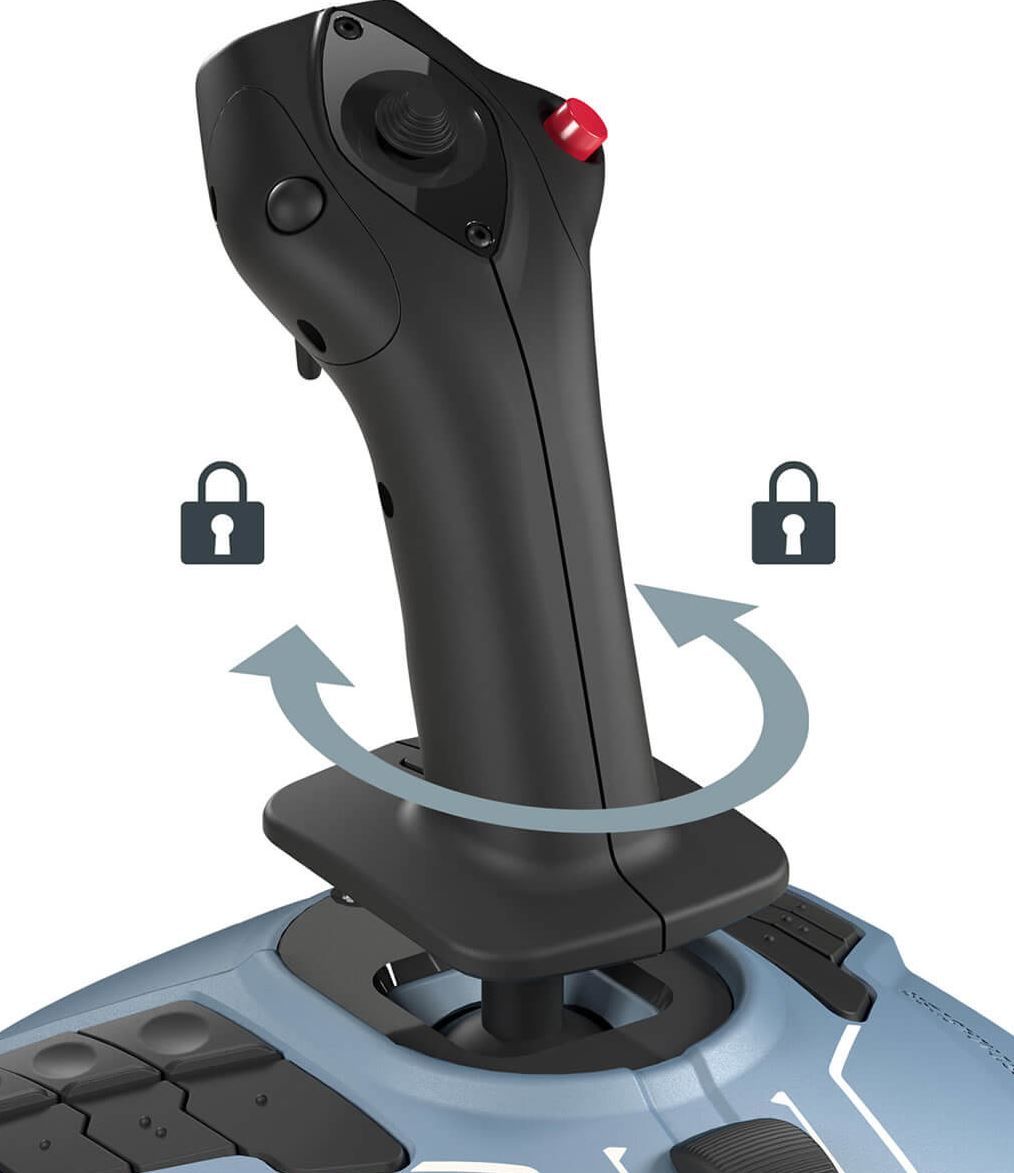 We already talked about the fact that the TCA Sidekick is compatible with most flight simulators. Right out of the box, it’s plug and play for the majority of sims. But there are many simulation programs on the market, and not all are as mainstream as Microsoft Flight Simulator.

Thankfully, you can customize the TCA Sidekick to be compatible with any software you want. To do this, you’ll need to download the Thrustmaster Advanced pRogramming Graphical EdiTor (T.A.R.G.E.T.) app. This is a powerful software suite that allows you to remap the Sidekick’s controls however you desire. To begin with, you get dozens of preset profiles for the most popular flight simulators. Alternatively, you can create custom profiles for games that aren’t on the default list. You can save an infinite number of custom profiles, so there’s no limit to how many sims you can play. 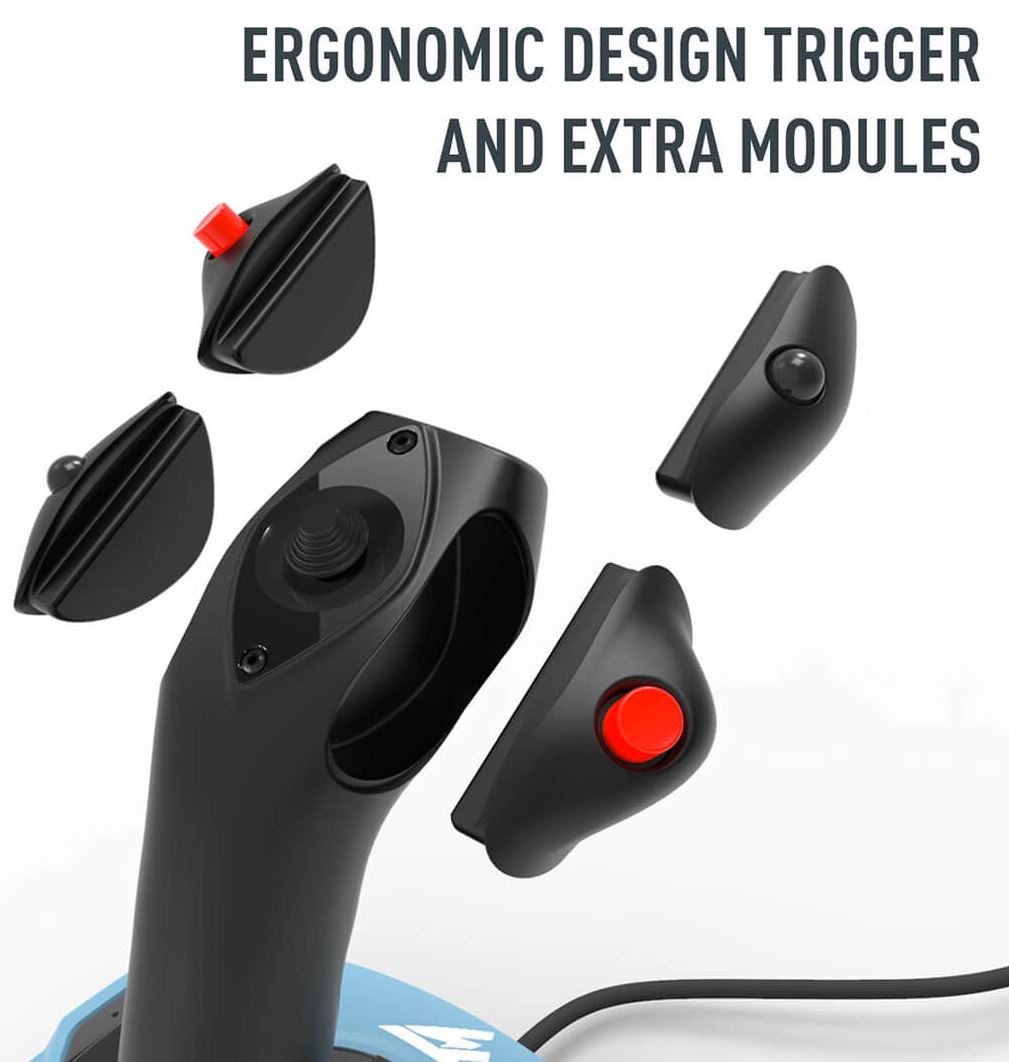 Moreover, the TCA Sidestick is compatible with Thrustmaster’s entire Thrustmaster Civil Aviation (TCA) ecosystem. This includes a wide array of Thrustmaster’s hardware, including joysticks, control quadrants, and pedals. This makes it easy to build a complete cockpit over time. Add new components as you need them, and you’ll grow a more robust, immersive simulator. Best of all, all TCA hardware is fully compatible with the T.A.R.G.E.T. app. You can configure your entire cockpit for each game, and even reconfigure it for individual aircraft.

As you can see, the Thrustmaster TCA Sidestick Airbus Edition is a robust gaming accessory. To begin with, it’s designed just like the A320 control stick. This lends a degree of authenticity that most sidesticks don’t offer. It’s also well constructed. The injected polymer is much higher quality than most game controllers, and is very durable. You can even configure it for left-handed use. This is great news for southpaws, who often struggle with stock controllers.

The control scheme is simple and easy to understand. With 12 remappable buttons, you can easily operate a variety of aircraft controls. And with full control of pitch, yaw, and roll, you don’t need to worry about a complex six-axis control. The easy-to-use trigger lets you effortlessly switch between rolling and operating the rudder.

Compatibility is a bit of a weak spot. You can only use the TCA Sidestick with Windows machines. That said, the vast majority of flight simulators are Windows-based to begin with. Unless you’re using a very unusual sim, you’re not missing anything. And no matter what Windows simulator you’re using, you’re guaranteed to get full compatibility. Thrustmaster’s T.A.R.G.E.T. system enables you to easily remap controls, and you can save control profiles for later use.