When it comes to the world of realistic gaming simulations, Thrustmaster is no stranger. Their peripherals have been used by people everywhere who expect nothing but the best equipment for use with flight simulators and driving games. We’ve already covered some of their individual peripherals, but this latest package is designed to be a complete set for the most advanced flight simulators. Let’s take a look at the Thrustmaster VG T.16000M FCS HOTAS Controller and see what it’s all about.

If you’ve ever used a Thrustmaster product before, you know that they don’t tend to have the most memorable model names. The VG T.16000M FCS HOTAS may just sound like a random jumble of words, but it actually stands for “Flight Control Simulating Hands On Throttle and Stick”. That’s exactly what you get with this package, consisting of the T-16000M flight stick and the TWCS throttle. Between these two devices, you’re likely to feel a bit intimidated at first. But once you get your hands on them, you’ll feel right at home in no time. 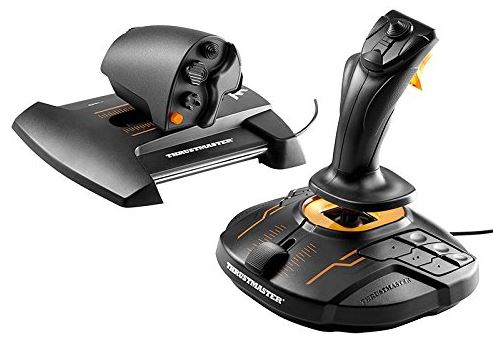 A major part of the intimidation factor is the design. It simply doesn’t look like any controller you’ve ever seen before. Instead, it looks as if somebody has ripped the controls out of a real plane and plunked them down on your desk. But we can’t rate this controller exclusively on looks. 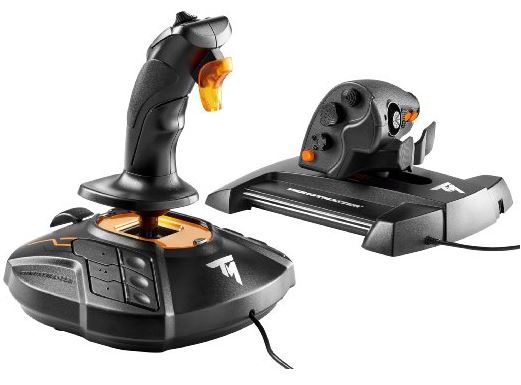 Both the throttle and flight stick are manufactured to the incredibly high standard you’d expect from Thrustmaster. The exterior of each component is made from a solid piece of injection molded plastic, while all of the moving parts are made from metal. This makes them quite heavy, which is actually a good thing when you need to slam your plane into top gear as you try to recover from a nosedive. Every button has a firm, intentional click that makes you understand the impact of every choice you make in such a high pressure environment. Regardless of whether you like to fly casually or aggressively, you’re certainly not going to have any qualms with the build quality. 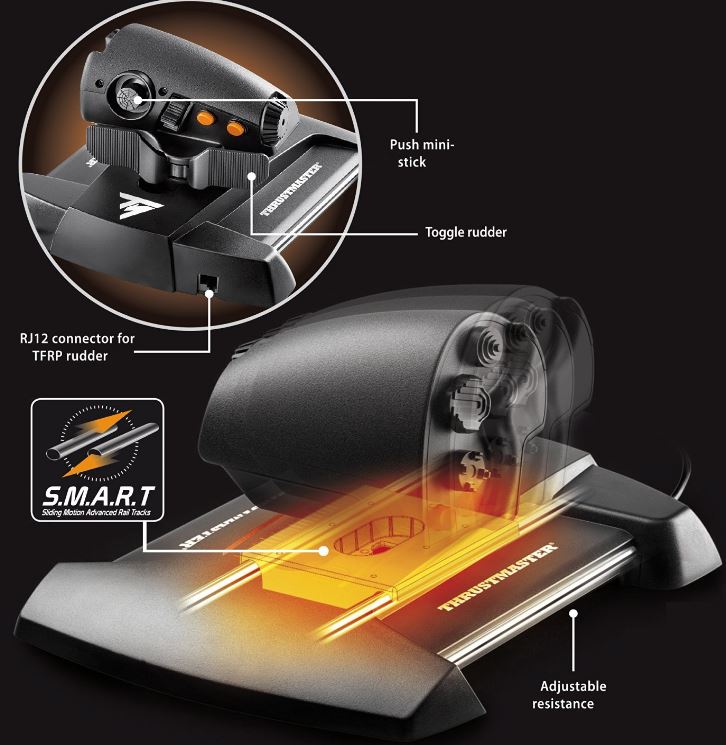 Planes are a little more complicated to fly than cars are to drive. Some games attempt to simplify the process making it hard to get your plane to maneuver the way that you want. But the throttle will help you take back that control. Speeding up or slowing down is intuitive – just move the throttle forward or backward. With your hand on the grip, your pointer finger will rest on a little analog stick. This gives you a second axis for controls, and its use can vary from simulator to simulator. On the right side you’ve got a little scroll wheel that modifies the third axis. This same data point can be controlled with the paddles at the bottom of the controller, so you’ve got lots of options for your play-style.

Finally, you’ve got a switch, two digital buttons by your fingers, and four more on the side. Some games are designed specifically for this controller; others allow you to assign any function you want to these buttons. Obviously having a lot of control options is important. The throttle certainly has enough for any game you can throw at it. In fact, there are 65,635 possible combinations of button presses and axis positions you can make. But the important thing is that each component is laid out intuitively. It might look like the control panel for a nuclear reactor at first, but as soon as you place it in your hand everything seems to just make sense, the clear sign of a well-designed controller. 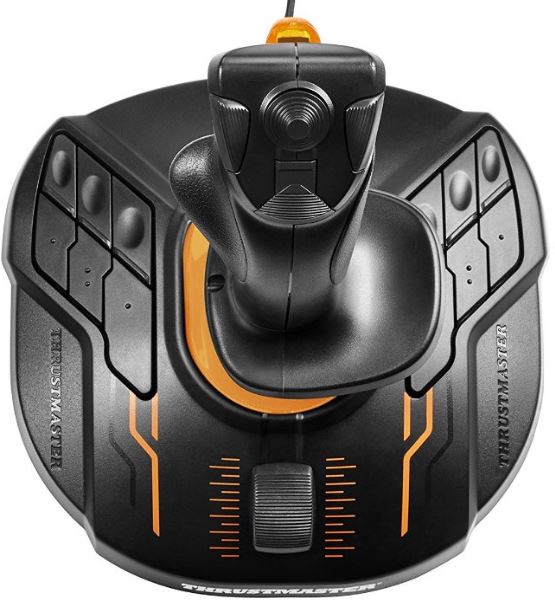 The first and most obvious point of control is the joystick itself. You can rotate it around the X-Y axis like any other joystick, but you’ll also be able to gently twist the controller. This is not an entire axis, but two “on/off” switches that can be used like buttons to move the rudder. Then you’ve got the thumb control, with a 360-degree range of motion. On each side, there are three programmable buttons that can be set to whatever features are used the most in your game.

On the base, you’ve got what may look at first glance to be a stylish design quirk. But these are actually 12 unlabeled buttons that can be assigned to any task or macro you like. A lot of high end flight sims and shooting games have these buttons pre-mapped, but for other games you can map them yourself to replace keystrokes that usually come pre-set. 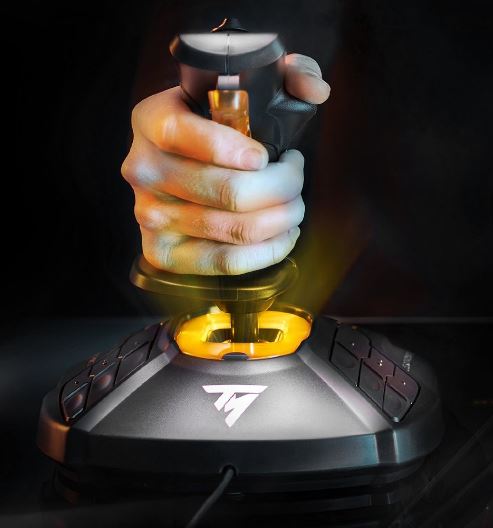 Having such a powerful array of controls is important, but it’s hard to enjoy your game if you’re busy cramping up and getting carpal tunnel. Fortunately, both the throttle and flight stick are very ergonomic. We’d almost go as far as to say that ergonomics was the number one concern when developing these products. You see so many flashy looking controllers that seem great, but are just awkward to use. The features on these controls may seem a little out of place, but once you put your hands on them you’ll realize that every feature is in the perfect position.

The joystick motion is particularly smooth. It’s got a little more resistance than many other models on the market. This feels a little odd at first, but you learn to appreciate it. The resistance helps you make controlled motions with fine details – the exact kind you need to make in games like these.

The same goes for the throttle. It’s firm, but powerful. With cheap controllers, it can be easy to flip your plane from glide to overdrive in a millisecond. But with the throttle, you feel conscious of every little speed increase you make, improving the realism of your game. 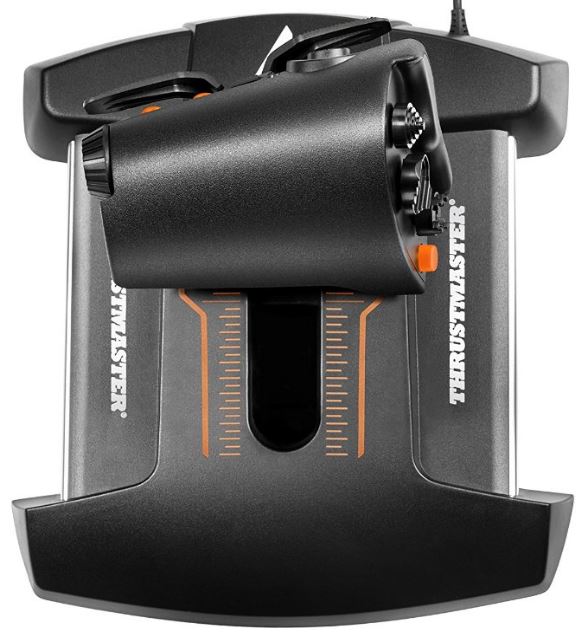 If you’re going to buy into any manufacturers ecosystem, Thrustmaster is the one to get. They make virtually every peripheral you can name, ensuring that there will always be an upgrade on the market. As far as flight controls go, this is pretty much the full package. However, you can still pick up an MFD (cockpit display replica) that can give you at a glance details about flight performance. Another handy add-on would be the TFRP rudder pedals, if twisting the joystick isn’t realistic enough for 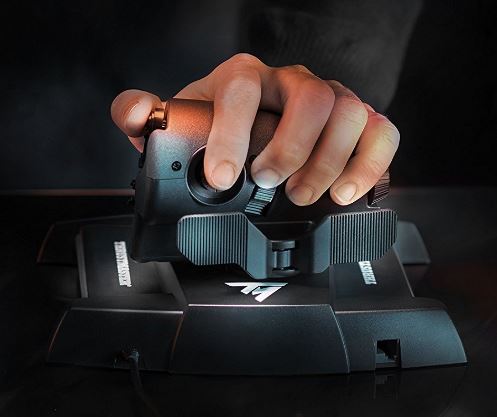 As for game compatibility, this is where many companies run into problems. These advanced flight controls are excellent for high end simulations, but what if you want to play a bit of shoot-em-up? Or maybe some classic X-Wing? Unless the games were designed for these controllers, they often won’t work. Well, Thrustmaster has found the perfect solution for this problem with their T.A.R.G.E.T programming software.

What this program does is connect to both your flight stick and your throttle, and combine them into one single device. For 80% of modern games, this will work right out of the box. For the other 20%, you’ll be able to custom assign buttons for any feature you want. If you don’t have time for customization, you can find plenty of pre-configured settings for all kinds of games online. Thanks to this feature, there is no flight control system that is more compatible than this one. 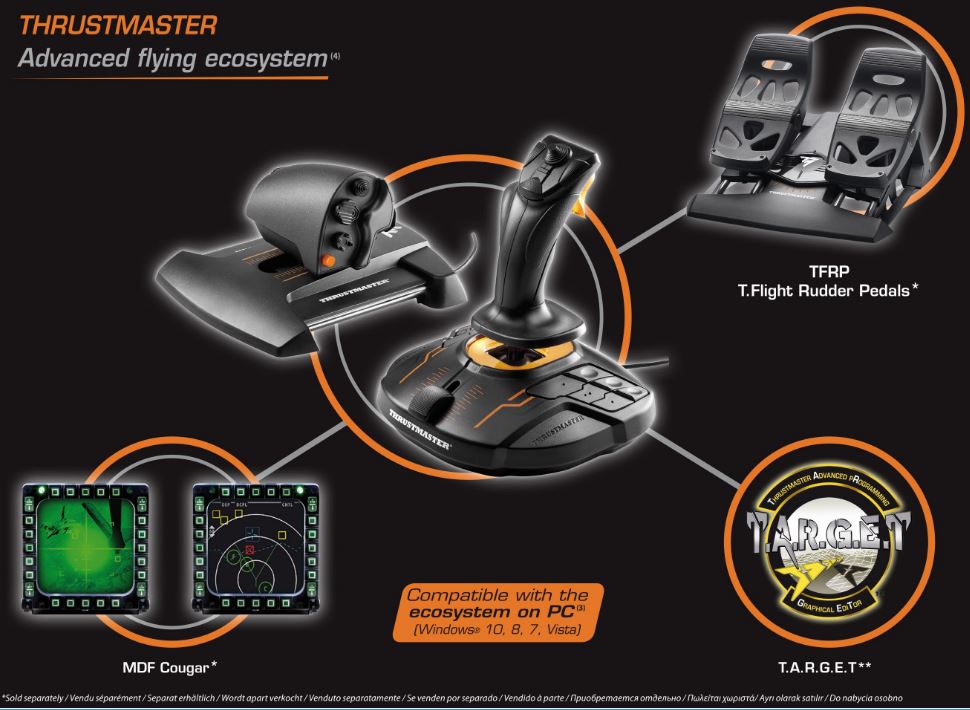 As far as high end flight controls go, we don’t think that you’d be able to find a better model. The Thrustmaster VG T.16000M FCS HOTAS is a high end controller with every possible button and feature possible, available for an incredibly low price. Generally, gamers need to make a choice. Do you want a realistic and accurate control system that is only designed for a specific set of advanced games? Or do you want a simple controller, that will work with all games at the expense of features? Thanks to the T.A.R.G.E.T. programming software, you no longer have to worry, making this one of the best buys on the market.

However, it’s worth noting that this might not be the best choice for all users. The features on these controllers are really only used in some of the simulation games. If you only want a simple joystick, you can save a few bucks by picking up the Thrustmaster T-16000M flight controller on its own. Or, if you already have a joystick you can score yourself the excellent TWCS throttle. But for everyone else, we think it’s fair to say that you’ll never see a better combination of advanced flight controllers than you will in this package.