Want to charge your smartphone? You’re probably using a USB or Thunderbolt cable. Want to transfer data from one device to another? Same thing. If your phone has a Micro USB cable, congratulations! It’s easy to tell the difference between the two. But what about USB Type-C and Thunderbolt 3? The two plugs look nearly identical! What’s the difference? 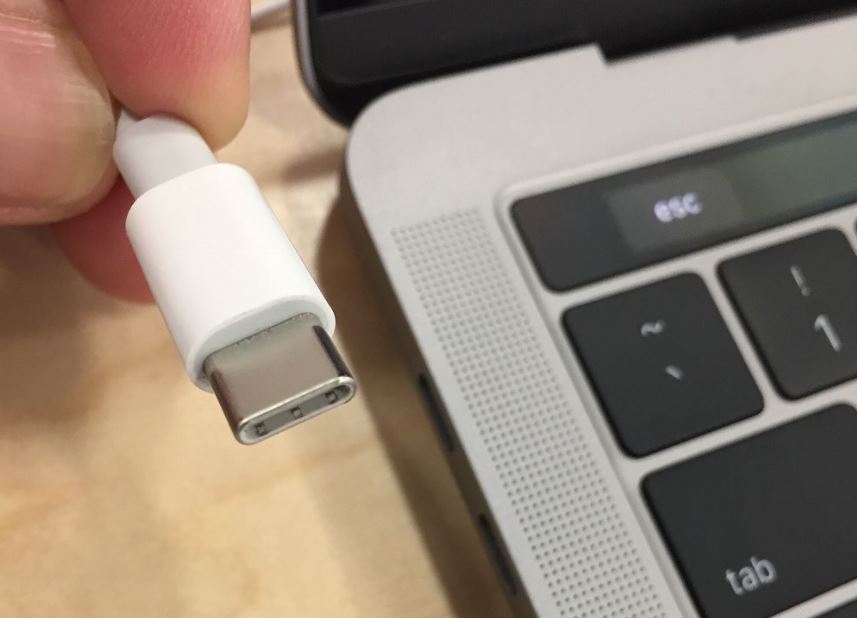 USB is short for “universal serial bus”. The original idea was to create a single, unified standard for data transfer. Obviously, the standard isn’t quite universal. For example, you now have USB Type-A, Type-C, Micro USB, and even USB Type-B for good measure. You also have different types of Type A port, such 2.0, 3.0 and 3.1. That said, you can more or less count on what devices will use what. Computers and laptops will have USB Type-A ports, with maybe a Type-C port thrown in for good measure. Smartphones and tablets will use USB Type-C or Micro USB. Printers and other connected will use a USB Type-C port.

USB Type-C has the same capabilities as the latest version 3.1 Type-A USB ports. However, it’s designed to offer two distinct advantages. First off, it’s slimmer. This allows for PC-port performance on your smartphone. Second, it’s completely reversible. Taking inspiration from Apple’s older Lightning ports, the USB Type-C connector can plug in either direction. No longer do you have to fuss around with a cord to figure out which way it goes.

Like other variants of USB, the USB Type-C port was developed by the USB Implementers Forum. This is a group of over 700 companies, including Dell, HP, Apple, Samsung, and Microsoft. Because there’s wide agreement on the standard, it gained rapid adoption across a wide variety of platforms. It’s not just used for smartphones. It’s also used by hard drives, smart home devices, and a variety of other electronics. Like other types of USB, it can be used both for supplying power and for data transfer. 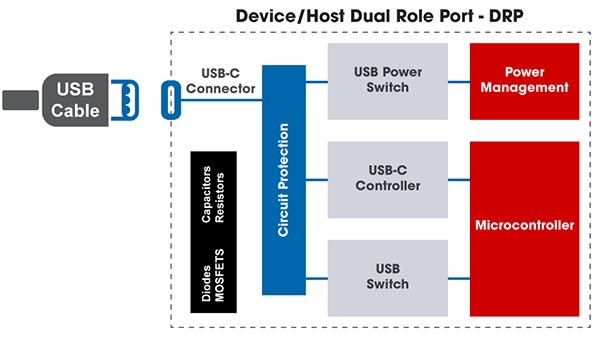 USB Type-C can transfer data at a rate of 20Gbps. This is a maximum, assuming you’re on a compatible port. If you’re plugged into a USB 2.0 port, for example, your maximum transfer rate will only be 480Mbps. In terms of power supply, standard USB Type-C cables provide 15 watts of power. However, specialized power delivery (PD) cables can provide as much as 100 watts of power on compatible ports. Much like PD cables, PD ports are specially designated for that purpose. These PD cables and ports still offer the same data transfer of 20Gbps. In other words, the only thing that changes is power delivery. 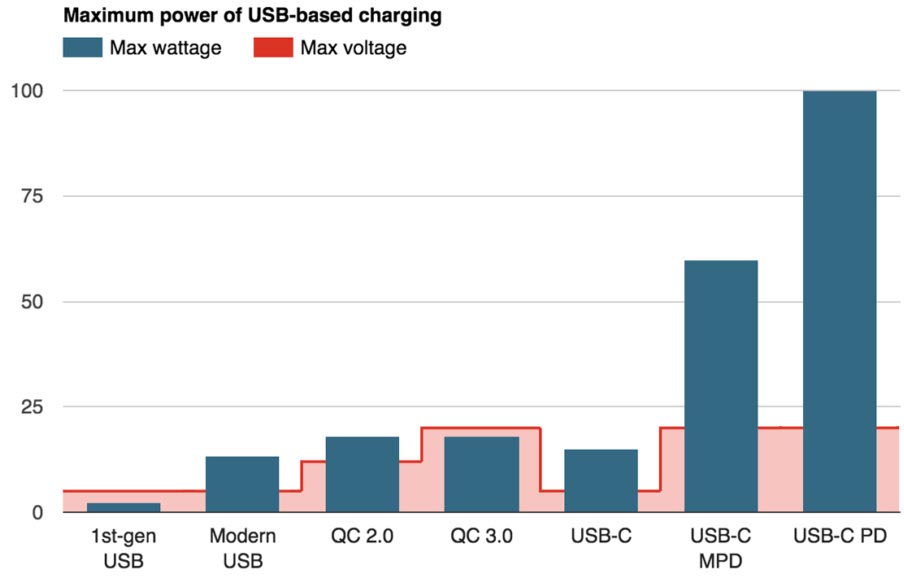 In addition to all that, USB Type-C cable can also transmit HD audio and video signals. It does this via the DisplayPort format, which is current on many modern TVs and monitors. Keep in mind that much like high-speed transfer and PD capability, it all depends on the port. If you don’t have a DisplayPort connection, you won’t be able to use that port as an HD video input.

At first glance, a Thunderbolt 3 port or cable looks like its USB Type-C equivalent. As a matter of fact, it’s mechanically identical. This includes both of USB Type-C’s major benefits. You get the slim, compact profile that’s perfect for tablets and smartphones. You also get the reversible design. As we already mentioned, you can plug a USB Type-C device into a Thunderbolt 3 port, and vice-versa. Keep in mind, though, that, the slower format is going to be the bottleneck. In other words, if you plug a Thunderbolt 3 external SSD into a USB Type-C drive, it will “only” transfer at 20Gbps.

When a Thunderbolt 3 device is plugged into a Thunderbolt 3 port, that speed doubles to 40Gbps. Not only is this faster than USB Type-C, it’s also four times as fast as the original Thunderbolt standard. This makes it a popular choice for content creators. If you’re constantly transferring multi-gigabyte files, you’re going to want the fastest possible transfer speeds! Moreover, Thunderbolt 3 is capable of transferring 4K video at a rate of 60Hz. This is comparable to current-generation HDMI cables. This makes it significantly more future-proof than USB type-C. 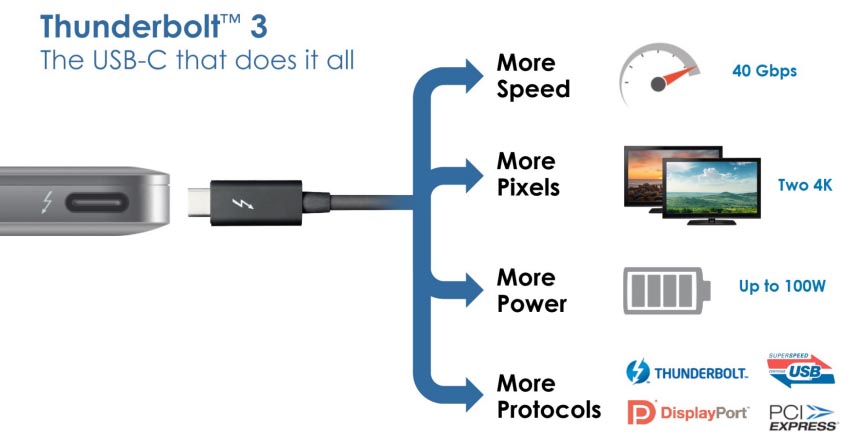 Keep in mind that much of this depends on the device. For instance, Apple has been using the Thunderbolt 3 cable for some time. So if you’ve got an older Mac desktop, you may very well have a Thunderbolt 3 port. That doesn’t mean it can stream 4K video! The internal hardware may or may not be up to the task. Even so, you’ll still get to take advantage of faster data transfer rates. Some current iMacs can even run dual 6K Apple Pro displays at 30Hz. Even Windows users can now get in on the game. Many Windows peripherals are now shipping with Thunderbolt 3 support as well. This is also good for Mac users, since you get a wider variety of options.

What’s the Difference Between Thunderbolt 3 and USB-C Ports?

As you can see, Thunderbolt 3 and USB Type-C have a lot in common. Most notably, they use the same basic physical format. This makes it easy to mix and match components. To be fair, you won’t get Thunderbolt 3 hardware with USB Type-C components in the loop. Even so, it’s good to have options.

On the downside, this design can make it tough to tell which port is with. For example, the Microsoft Surface Laptop 3 only sports USB Type-C ports, but they’re not labeled. If you plugged a Thunderbolt 3 device into it, you might thing something was wrong with your device. Similarly, the Apple MacBook Pro has Thunderbolt 3 ports, but if you weren’t expecting them, you wouldn’t know it.

With the Surface Laptop 3 and MacBook Pro, this isn’t really a big deal. At least all the ports are the same. But many devices come with a mix of Thunderbolt 3 and USB Type-C ports. How are you supposed to know which is which? In this case, your only recourse is to check your owner’s manual. The same thing is true for most Thunderbolt 3 and USB Type-C cables. It’s often impossible to distinguish one from the other without testing them.

To be fair, this issue isn’t unique to Thunderbolt 3. For example, USB Type-C PD technology often has similar issues. We’ve seen plenty of devices where it’s not clear which port is the PD port and which is the ordinary port. Meanwhile, the ones that are marked can be marked with a “PD” imprint or a battery picture. With that much inconsistency, it’s no surprise that people get confused and frustrated. Just take a deep breath and check your manual.

Which One is Better?

At first glance, it might seem like the Thunderbolt 3 format is a clear winner. In one sense, that’s true. You get data transfer rates of 40Gbps, twice the rate of USB Type-C. That said, data transfer rates aren’t always king. For instance, suppose you want to charge your PD-capable smartphone. A Thunderbolt 3 port will max out at either 60 or 100 watts. On the other hand, if you plug into a PD-capable USB Type-C port, you’ll get up to 100 watts every time. That’s an enormous difference, and it’s certainly worth taking into consideration. This is why many loyal Apple customers are begging the company to switch the iPhone to USB Type-C. With a smartphone, charging speeds are far more important than data transfer rates.

In many cases, as we’ve already discussed, the two formats are interchangeable. For example, suppose you’re connecting a USB Type-C external hard drive. In that case, it doesn’t matter whether you plug it into a Thunderbolt 3 port or a USB Type-C port. Either way, your data transfer rate will max out at 20Gbps. Similarly, if you’re connecting a Thunderbolt 3 phone in to charge, it won’t matter. You’ll be getting the maximum supported by your device, either 60 or 100 watts.

So, which one is the best? As is so often the case, it depends on what you’re trying to do. If you want the fastest possible data transfer rate, shoot for a Thunderbolt 3 device. You’ll get 40Gbps of bandwidth to move big files in a hurry. If you want faster charging speeds, get a USB Type-C device with PD capability. You’ll get two thirds more charging capability, depending on your other options. That said, if you can snag a Thunderbolt 3 device with 100-watt capability, you’re looking at a clear winner.