If you’re younger than about 25 years old, you probably think of HD video as “standard” video. This is a sign of just how far we’ve come in a short time. From 1941 all the way up to the early 2000s, the standard was 720 x480 pixels, or 480p. This was good enough to tell what’s going on, but by modern standards it’s very fuzzy. For example, in wide shots of a hockey game, you couldn’t see the puck! In the early 2000s, HD video became available. This standard allowed for resolutions of up to 1,920 x 1,080 pixels, or 1080p. You could see the hockey puck, along with all kinds of other fine details.

Nowadays, 1080p resolution is no longer some shiny new format. It’s the norm! Now, newer formats like 4K and even 8K are starting to show up in our living rooms. And other devices are starting to become HD capable. Even a few years ago, streaming 1080p video on your smartphone was a silly idea. There just wasn’t enough bandwidth available. But now that you can stream in 1080p on a smartphone, how do you get that picture onto a big screen. An ordinary HDMI port would take up a third of your smartphone! For that reason, manufacturers have developed two smaller HDMI standards for smaller devices: mini HDMI and micro HDMI. Let’s talk about micro HDMI and mini HDMI, and why you might prefer one or the other.

Before we talk about any special types of HDMI cable, let’s start by talking about ordinary HDMI. Believe it or not, “standard” HDMI actually has a name: HDMI Type-A. Type-A HDMI cable is what probably comes to mind when you first think of HDMI. It’s the cable you use for most TVs, monitors, PCs, game consoles, Blu-Ray players, and set top boxes. In fact, most of these devices already come with an HDMI cable. If you’ve got one laying around, go ahead and pick one up and look in the end. There, you’ll see two rows of pins, with 19 pins in total. 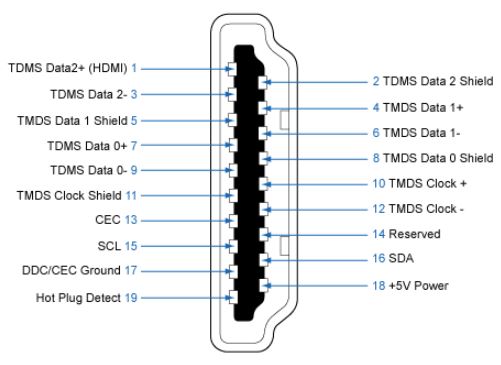 This 19-pin design is the heart of all different types of HDMI connectors. Regardless of what type of HDMI cable you use, there will always be 19 tips. These 19 tips allow you to do everything that HDMI can do. Most obviously, it transmits video. For this, there are three tips belonging to each channel, as well as audio. There are additional channels called clock channels. These channels don’t actually carry any useful data, but they keep the other channels in sync. This prevents your screen from looking janky if the three color channels were to get out of sync. At this point, you’re probably thinking that it’s just a video cable, right? That’s what HDMI does.

That said, there are some extra advantages that HDMI offers other formats. For one thing, there’s a 5-volt power supply channel for delivering power to certain devices. Another channel is a monitor channel that keeps track of when devices are turned off. There’s even a so-called “swing pin” (pin 14), which is used as a utility pin for a variety of applications. For example, it can be used to transfer an Ethernet signal over short distances.

There’s one particular channel that bears mentioning before we continue. This is the CEC (Consumer Electronics Control) channel. The CEC channel allows you to do fun things, like program your soundbar to turn on whenever your TV does. Keep in mind, though, that your devices have to be compatible in order for CEC controls to function.

When choosing an ordinary HDMI cable (or any HDMI cable) look for an HDMI 2.0 cable. HDMI 2.0 supports ARC and eARC, which allow for more advanced audio setups. Essentially, they allow audio to be sent both ways, which is essential for many AV controllers. In addition, if you need to support 8K video, you’ll want a beefier HDMI 2.1 cable. Contrary to popular belief, HDMI 2.1 is not required for 4K video. HDMI 2.0 can handle it just fine. Regardless of which type of HDMI Type-A cable you choose, they all have the same 19-pin tip.

This wasn’t always going to be the case. In fact, there was a planned standard called HDMI Type-B that would have shaken up the entire industry. Known as “HDMI Dual-Link,” this standard was planned with a 29-pin connection for faster connection speeds. However, HDMI Type-B was never used. Before anyone could actually implement it, the HDMI 1.3 standard was rolled out. HDMI 1.3 offered better performance than HDMI Type-B, so Type-B was obsolete before it was even released.

There are three other HDMI standards in use today. HDMI Type-C, commonly called mini HDMI, HDMI Type-D, commonly called micro HDMI, and HDMI Type-E. We’re talking about mini and micro HDMI today, but we might as well briefly touch on HDMI Type-E. HDMI Type-E is a specialized connector with a clip-on connector that’s designed to resist vibrations. It’s commonly used for automotive display panels and other high-vibration applications. However, you’re not likely to ever need it for a household entertainment setup. 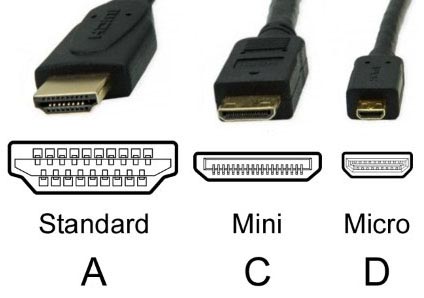 What is Mini HDMI?

Remember that HDMI 1.3 specification that rendered HDMI Type-B obsolete? Along with that standard, a new type of connector was welcomed to the HDMI family. Known popularly as mini HDMI, this new HDMI Type-C standard was designed to the same standard as HDMI Type-A. The only difference is the size of the tip. Instead of the larger Type-A tip, the mini HDMI tip is only 10.42mm wide and 2.42mm thick. This makes it a full 60 percent smaller than the standard HDMI connector.

Now, you might be wondering what the advantage is of this small size. After all, most TVs, monitors, and game consoles don’t struggle for size. However, this isn’t always the case. For example, the Dragon Touch S1 Portable Monitor is exceedingly small, and uses a mini HDMi port. In addition, mini HDMI ports are commonly found on DSLR cams and other mid-sized devices.

Less frequently, mini HDMI ports are sometimes found on tablets. In many cases, such as some iPads, you get a standard HDMI dongle along with the device. In other cases, you’ll need to buy your own adapter. Either way, it’s the same cable with the same capability, so adapters are very reasonably priced.

What is Micro HDMI?

HDMI Type-D, usually called micro HDMI was released a bit later, with the HDMI 1.4 standard. Like mini HDMI, micro HDMI has the same 19 pins as the original design. This makes it easily compatible with ordinary HDMI, although you’ll still need an adapter. The most impressive thing about micro HDMI is just how compact it is. The connector has a plug size of only 6.4mm wide and 2.8mm thick. This makes it an amazing 72 percent smaller than the original HDMI connector.

In the early part of the last decade, some smartphones started using micro HDMI connections. Perhaps the most popular of these was the Droid X, which made it one of their top advertising features. However, USB Type-C now offers a more universal standard for smartphone video. And if you don’t have USB Type-C, there are numerous streaming applications available. For most smartphones, micro HDMI connections are simply not needed, and they’ve largely been abandoned.

So, what’s the difference between micro HDMI and mini HDMI? As you can see, it’s just a matter of size. The micro HDMI connector is about the size of a mini USB connector, so it can fit in almost any device. Therefore, it’s sort of a niche product. The mini HDMI is far more commonly-used, across a wider variety of devices. But they’re the same thing in terms of performance. Neither one is really “better” or “worse.” It’s just a matter of what your device uses.

Either way, you’re getting a reliable, future-proof format. With any modern HDMI cable, you get support for 4K video. And if you upgrade to HDMI 2.1, you can even transmit 8K video without any trouble. Considering that 8K TVs are still the bleeding edge of consumer entertainment, HDMI will be around for some time. And why shouldn’t it be? Its 19-pin design allows it to connect just about any kind of device, and it’s become a universal standard. So whether you need mini HDMI or micro HDMI, you don’t have to worry about it becoming obsolete.