TechGuru May 14, 2017 Networking No Comments

Whether you’re setting up WiFi for guests using the patio at your restaurant or just trying to blanket your backyard in wireless, there is no doubt that outdoor wireless networks behave very differently than indoor networks. Your standard, everyday router just isn’t designed for vast outdoors spaces, instead being geared towards wall penetration.

The TP-Link N300 EAP110 is a uniquely designed piece of hardware that can help broadcast your existing WiFi network in an outdoor environment. How does it perform? We went hands on to find out. 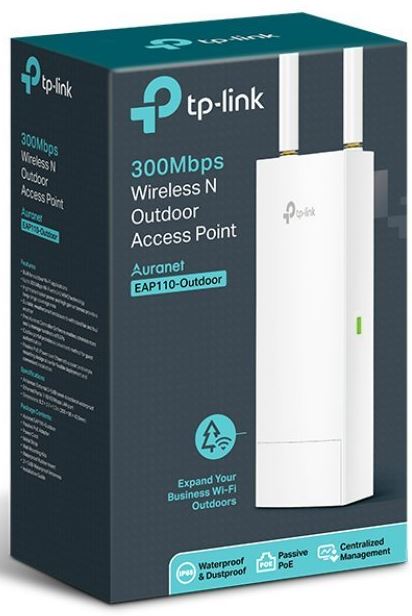 As a Wireless access point, the N300 EAP110 is designed to tap into your existing WiFi network and rebroadcast it across the wireless-N spectrum. It has a maximum theoretical bandwidth of 300 MBPS, and is extremely simple to mount and configure. It comes with a suite of commercial grade software, making it simple to manage a number of these range extenders, should you need to cover a large area.

Although Wireless N isn’t the newest technology on the market, there are a few key advantages to this style of networking. The first advantage is compatibility – almost every modern device supports the 2.4 GHz N frequency, while not all of them support the 5 GHz frequency used to get a high speed connection on 802.11ac. N is also capable of travelling long distances, when it’s uninterrupted. In an outdoor setting, 802.11N definitely makes the most sense.

Both of the two antennas have a very nigh gain, allowing the signal to travel a much longer distance than your standard router. But when you’re covering a long distance, you’ve got to expect to have a lot of users connected to your extender. This is where the MIMO technology comes in.

MIMO stands for multiple input, multiple output. In essence, this means that there are two routers built into one. But when you get into the technical details, it’s a little more complex than that.

The 2.4 GHz frequency is divided into a number of separate channels. Most routers will select a channel between 1 and 11, often determined by whichever is the least crowded. However, it is possible for two routers to share the same channel. The speed is slightly reduced, but the combined speed of two signals sharing the same channel is still greater than the theoretical bandwidth of a single channel.

The EAP110 has 2×2 MIMO. This means that it has two separate signals per channel, with two channels that can be used simultaneously. This is like having four separate networks, with users able to be allocated to each channel depending on their usage. Every have one user downloading a ton of files and slowing down your network for everyone? With the 2×2 MIMO, this is a thing of the past. This technology isn’t necessarily designed for heavy users, but for an environment where you’ve got lots of people trying to share a network at the same time, it’s ideal. This makes the TP-Link N300 great for public spaces, and a very much worthwhile buy.

Getting the EAP110 up and running is a very simple and straightforward profess. The first thing to do is get it mounted on the wall. With most routers we’ve used, this process is a pain in the butt. However, the TP-Link N300 EAP110 makes it very simple and straightforward. There is a mounting bracket included. You just attach two screws to the wall, and the EAP110 slides right into the bracket. The whole process only takes about five minutes, making it the ideal choice if you have to install a lot of range extenders.

Another handy feature about the EAP110 is that it supports power over Ethernet. You’re going to have to run an Ethernet cable from your router to this extender anyway. When using PoE, you won’t have to install a separate power adapter. This can save you a ton of time and maybe even a little money, making operation simple. 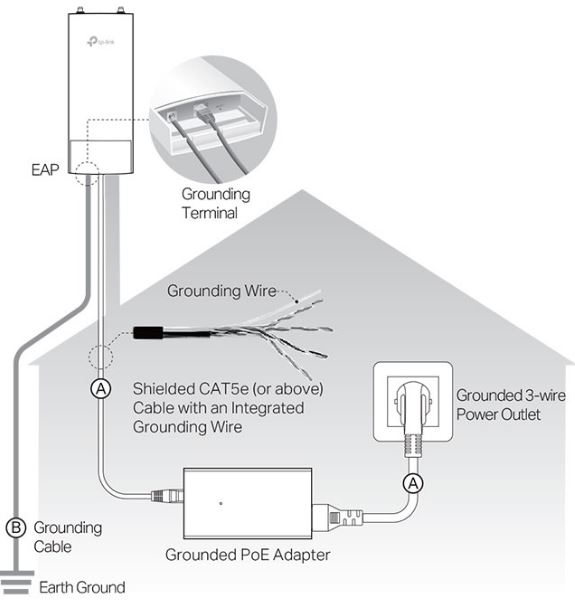 Once the router is plugged in, configuration is easy. For most users, there will be no setup required. You can, however, log into the extender to change settings if you like. For users installing this as the single extender in a small system, logging in directly is the easiest way to get it set up. But if you’re going to be running a lot of access points, you’ll want to take advantage of the Auranet controller.

Auranet is a piece of software supported by most commercial routers. You just log into your main router, and configure the settings for all of your access points. Every access point that gets plugged in automatically downloads the settings, so you don’t need any configuration aside from mounting it and turning it on. 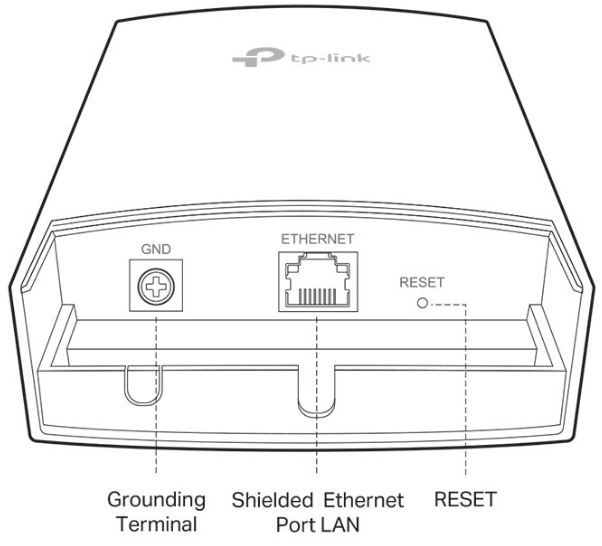 One of the parts that stands out about this EAP is the security. You can configure them to work on a single Vlan, which isolates the access points from the rest of your network. This is fantastic when you’re setting up a public wireless network on a system that has a private corporate network, as it keeps everything isolated.

You’re also able to activate a captive portal. This allows you to show a pop-up screen for guests, explaining the terms of service of your network. The access portal can also be used to help separate guests from private network users. But providing log ins, you can ensure that only authorized users can access certain parts of the network, or put a speed limit on guest users. 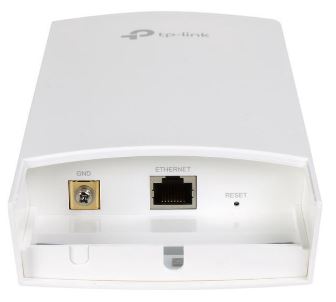 One of the main advantages of this access point is the massive range. Most consumer networking equipment – especially your typical 802.11n hardware – suffers from extremely limited range. Often, we’re seeing numbers below 100 feet But the TP-Link advertises 200 meters of range – a whopping 650 feet. If this is true, this would have been one of the longest range access points we’ve used.

In the real world their predictions did hold true. At 650 feet, we did have a stable connection. However, the speed did suffer. Up to 300 feet away with a clear line of sight, the speed was as good as we’d expect. By the time we hit 400 feet, the internet was still usable, but it was clear that the speed was impacted. Between 400 and 600 feet, the internet was noticeably slow. Overall, this is still one of the best ranges that we’ve used for a wireless access point. The speed might be a little slow at the end of the range, but that’s to be expected when you’re so far from the base station.

The maximum theoretical bandwidth of this EAP is around 300 Mbps, but we found the cumulative bandwidth to be closer to 220 Mbps. However, each individual user is probably going to cap out at around 20 Mbps, especially if they’re located far away from the access point. This is to be expected. This access point isn’t designed to give a single user high speed internet. It’s designed to broadcast your wireless network across of massive range, with many people able to access it.

Many of the options on this access point have a very commercial nature. Although it does work for home use, you’re going to be paying little more for features that you may or may not use. If you’re just looking for a simple way to extend your wireless network, you might do a little better with a whole-home WiFi system. But if you do want to run multiple access points or have a large number of users, this would be a pretty solid choice. 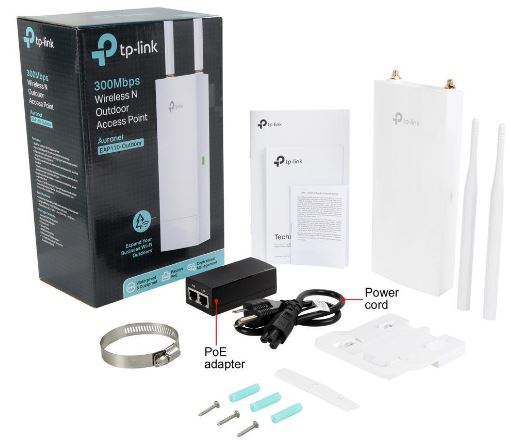 Overall, there are a lot of things we liked about the TP-Link N300 EAP110 Outdoor Wireless Access Point. By upgrading an older technology instead of using the latest wireless communication standard, they managed to create something that can create a stable connection with high speeds over a distance beyond 400 feet. This is not something you often come across, making this a very unique buy.

We’d recommend this extender to anyone who wants an easy to install access point that will work well in the great outdoors. For an indoor environment, you might want to consider taking a look at our review of the best whole-home mesh WiFi systems. Although they are designed for indoor use, the setup procedure is a little more consumer friendly. But for those of you who need advanced security software and a rock solid connection, you certainly won’t go wrong with the TP Link N300 EAP110.