If you’ve ever seen a professional presentation, you probably saw the person presenting use some kind of tool to help. It might be as simple as a hand-clicker, to move between PowerPoint slides. It might be a laser pointer. But whatever the case may be, having the right tool can make the job much easier. And it doesn’t hurt that it projects a sense of professionalism and preparedness.

Whether you’re out in the world with your laptop, or you’re about to give a presentation, you usually don’t have the same kind of control you do in a stationary position. Because a mouse and keyboard is hard to beat. However, the TracPoint is supposed to fix all of that. Similar to writing with a pen, the TracPoint mouse is held and used as though it were a pen. Though it’s not really a mouse, it’s actually several tools shoved into one device. As such, it’s more like a generalized productivity and travel tool. 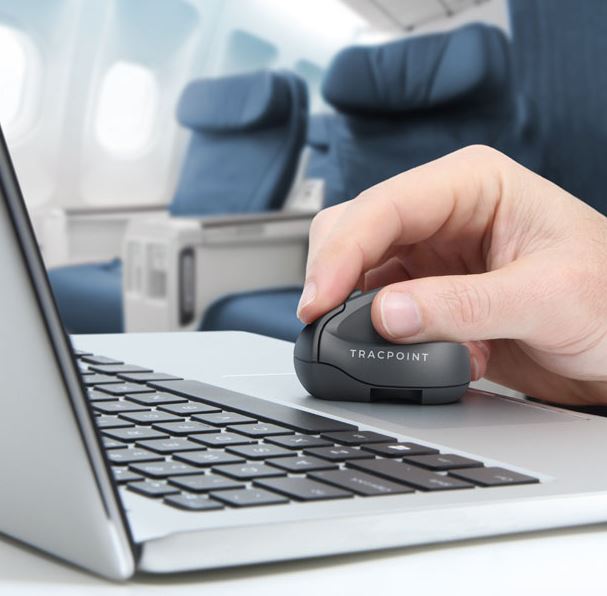 Moreover, TracPoint is supposed to help you optimize your workspace. That’s mostly because you can use one device instead of two or three. Clearly, it’s much easier to keep track of one device than several, especially when you start thinking about having to recharge batteries.

Additionally, they’ve shoved some wireless presentation tech inside the mouse as well. That allows you to use it as a kind of laser pointer, serving as a spotlight for your presentation. All of that shoved into one device provides a lot of opportunities for failure. But how well does TracPoint manage to keep all these different elements working together in harmony?

TracPoint measures 1.3 x 1.6 x 2.2 inches, making it pretty small. Even the most compact and portable mice out there tend to be a little bit larger than this. Even though it’s tiny, the hardware itself is pretty impressive. For instance, it’s running an optical sensor, making it useful for basically any surface. That includes glass. The optical sensor reads at 1800 DPI, which compares favorably with most regular mice. You don’t really need to go higher than 1800 DPI, even if you’re doing a presentation on an enormous screen space.

Because this is held like a mouse, there are several mouse-like buttons. The compact pen-like grip also offers you two physical buttons and a scroll wheel. Additionally, there are ways for the presenter to operate slide control, application change, link activation, and the spotlight features. But we’ll look at that a bit more in a moment. 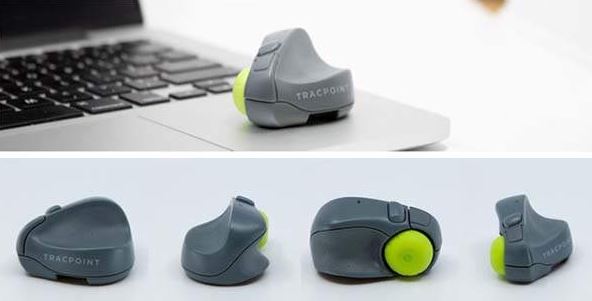 When it comes to using the device as a travel mouse, the TracPoint seems to work pretty well. Because it was designed so that it’s held like a pen, it’s very easy to navigate. Even though it’s a pretty small device, the controls aren’t shrunk to the point that it becomes an issue. In fact, it’s basically palm-sized, so carrying it is quite easy.

It’s worth noting they’ve gone with a 1-ounce design. It weighs about a quarter of the weight of a regular mouse. It also uses a fairly ergonomic grip, allowing you to get ahold of the unit with one hand firmly. However, it’s pretty clear that this device favors people who have smaller hands due to the small nature of the unit. Not that it’s tough to use with larger hands, it’s just a little less elegant.

To get the most of out of your TRACPOINT, you need to make use of the control panel software. From there, you can start assigning the mouse buttons to different actions. For example, you might make a macro that switches slides anytime you tilt the mouse and use the center button at the same time. You might change the mouse tracking speed, or affect the scroll speed. 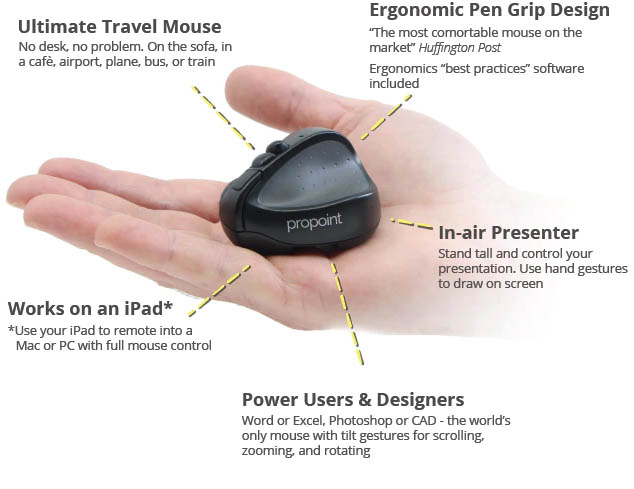 How do you actually exercise control over the mouse? Apart from the buttons, you’ve got several options. As a navigation tool, the TracPoint includes the ability to start/stop videos, or to click on links. Additionally, TracPoint lets you move between different windows as needed. So if you want to move from a browser window to a PowerPoint window, tabbing between screens is as easy as using a keyboard.

Inside their software, the Swiftpoint Control Panel allows you to optimize and personalize many aspects of TracPoint’s design. For example, that includes the colors you use, the size and shape of the presenter, as well as configuration for the speed of the trackpad and the reactivity of the buttons. So if you want to move from a small red light to a large blue one, it only takes a couple of minutes to work out.

Part of the reason why the TracPoint was designed so small is because it can fit inside the palm of our hand. That allows you to continue gesturing while using the unit in a presentation. In fact, in addition to being able to control the mouse by clicking things and using the scroll wheel, you’re able to exercise control over your presentation using gestures. 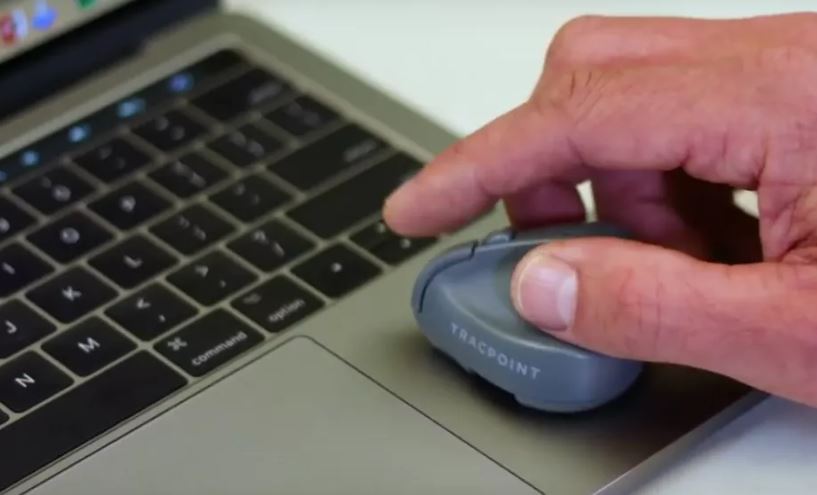 Their gesture system is a bit like using a videogame console with a motion controller. As you tilt or rotate the mouse, an internal sensor can observe that motion, and allow you to assign those motions to shortcuts. For instance, you might launch an application when you click both mouse buttons and rotate the mouse.

It does mean you have to be a little more deliberate with how you hold the unit. But since you can assign the motions to only do something alongside clicks, it never becomes an issue. As long as you take the time to setup the gestures appropriately for your circumstances, this really just expands the control you have over the device.

The wireless connection is made using Bluetooth, making for a steady connection that’s widely compatible with basically any platform you might try to use with. The Bluetooth is a slightly older format, running last generation’s Bluetooth 4.0. However, the difference should not be detrimental to this kind of device. Pairing still is fast and quick, afterall.

The recharge is done using standard USB-A. Notably, and somewhat surprisingly, TracPoint also supports a rapid recharge capacity. The battery is able to utilize sixty seconds of charging in order to deliver an entire hour of use. While filling the battery still takes about an hour, doing so will give you nearly two weeks of use.

So if you forget to charge the unit, you can pretty much do it on the spot. And if you don’t forget, you’ll be set for weeks to come. That makes this thing not just wireless, but incredibly efficient at being wireless. Because it requires very little micromanagement or oversight. 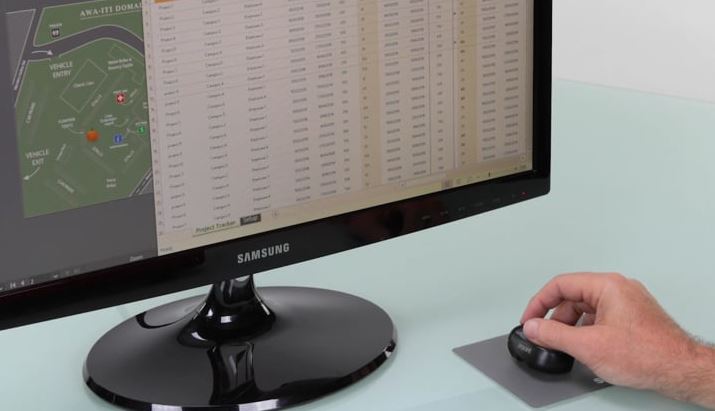 Additionally, the USB charging dongle connects to any USB port. For instance, like ones you might find on the side of a tablet or laptop. From there, you plug the mouse into the connector, which is plugged into the device you’re using. That’s not totally intuitive because there aren’t any wires involved. But the self-locating magnet connector will help align the charge pins. That away, it can safely hold the mouse in place while it’s being charged.

TracPoint uses a wireless Bluetooth connection for wireless communication. The included USB charger is only intended for charging. That means you can use the TracPoint alongside devices that only offer USB-C ports, like many kinds of smartphones and modern laptops.

Though there is no USB-C charger that works with TracPoint presently, so you will have to find a more traditional USB-A slot in order to recharge your stuff. Thankfully, that’s a problem they might alleviate in the future with an adapter. It’s also a problem that should be a minimal inconvenience due to the lengthy battery lifespan behind this device.

The user software is supported on MacOS and Windows alike. And since the TracPoint device is plug and play, there’s no installation process. You can start using it on Linux, Android, iOS, Mac, and so forth, right away. However, you won’t be able to customize the mouse if you’re using a platform like Linux. Because while the core features of the presenter can work on Linux, their software isn’t supported on that platform.

The TracPoint includes a USB-A charger, zip-lock carrying case, and the user software. The carrying case is round, with about the dimensions of a hockey puck. It allows you to seal away and carry the presenter carefully. The case is water resistant and small enough to fit inside a pocket.

TracPoint is a couple of different devices crammed into one thing. In the simplest terms, it’s a presenter that’s been combined with a mouse. But not just any presenter, and not just any mouse. The presenter is widely adjustable, allowing you to change everything from the color to the intensity or shape of the light. And the mouse? It’s pretty much as good as any regular PC mouse, except it’s been given some cool motion controls to really help extend the possibilities for control. 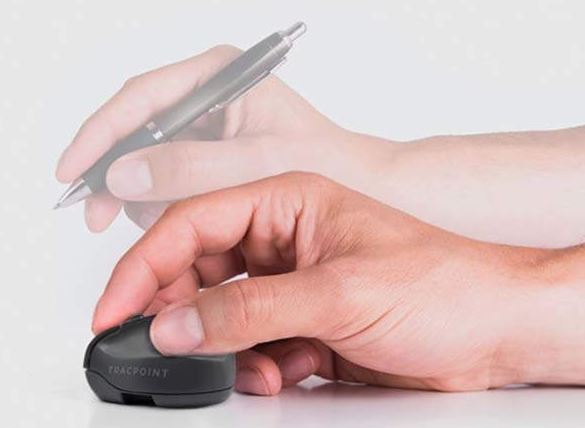 Sure, you can get two or three separate devices and end up with a lot of the same abilities. But shoving them into one unit, and giving it such an impressive battery lifespan? That makes the TracPoint pretty impressive in its own way. For people who are persistently traveling, it may or may not make sense to use this as a mouse alone.

If you have no interest in ever making use of the presentation abilities inside this unit, then you could probably find a more cost effective design. However, to its credit, being able to open programs with motion controls is pretty cool in its own way. And for people who are able to take advantage of the presentation abilities in addition to the mouse features, the TracPoint should prove very invaluable.