Treblab has been on our radar for quite a while. This company specializes in producing affordable audio gear that performs above its price bracket. If you’re browsing through Treblab’s store, it’s easy to be overwhelmed. They have such a diverse product range, that it’s hard to know where to start. However, these diverse products exist for a good reason. They’ve got something for almost every application, so you can find a speaker or a pair of headphones that works for your own individual needs.

Even though Treblab has sold a speaker labelled FX100 for quite some time, this latest generation is an entirely new beast. It’s designed to be loud, extremely durable, and double as a charger. This speaker is being promoted as the ultimate option for an outdoor enthusiast. But how does it perform in the real world? To find out, we decided to try it out for ourselves. 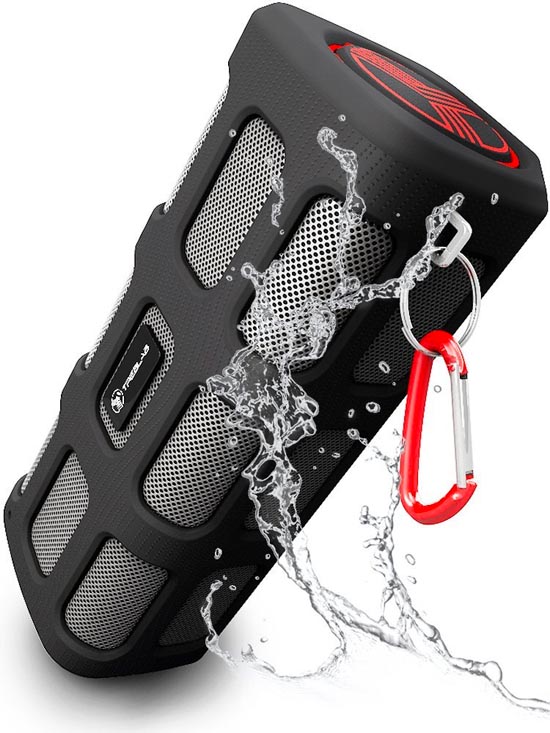 The Treblab FX100 is portable enough to carry around, but large enough to have some substance to it. At 9 x 4.3 x 3.2 inches, it’s roughly the same size as a tallboy. Enshrouded with metal and rubber, you can tell from the first time you pick it up that this thing is meant to be durable. From a volume perspective, this thing sure packs a punch. It’s powered by a massive 7000 mAh battery, which can also be used to charge any of your USB appliances. You can connect to it through Bluetooth, or you can use an AUX cable for older hardware. It’s advertised as being waterproof, dust-proof, and shockproof, so on paper this seems like the ultimate outdoors speaker. But specifications can be deceiving, so we had to test it out for ourselves. 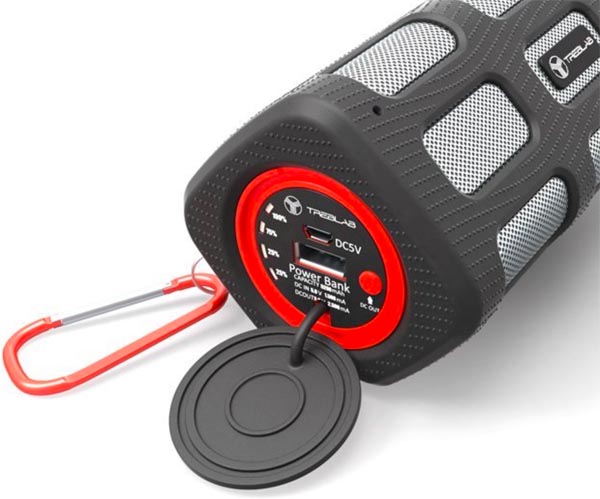 Often, durable speakers have a very military-esque look to them. The FX100 still looks like a beast, but the design feels much sleeker than popular alternatives. Shape wise, it’s somewhere between a cylinder and a rectangle. This keeps it smooth so it feels good in the hand, but also gives it some flat surfaces for it to sit on.

The rubber housing is filled with audio cutouts, with the internal drivers protected with a metal shroud. Visually, it looks as if a large metal case was covered with a silicon case, although the grilles are simply inserted into the rubber. 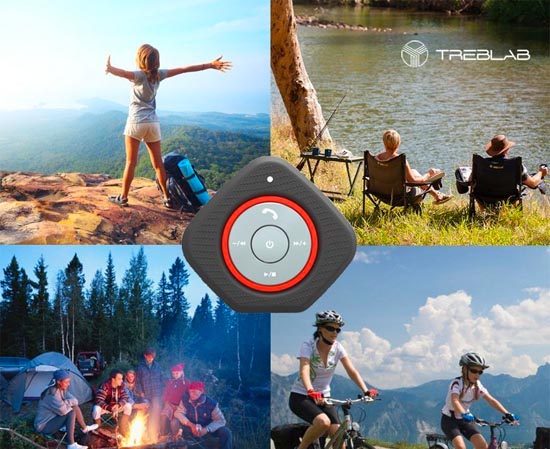 There are two circular caps on either end. On the bottom, the cap is embossed with a bright red Treblab logo. This cap pops off, exposing the charging ports and an LED battery meter. The LED meter has four separate sections, each representing 25% of the total battery life. If all four are lit, your battery is 75% to 100% full. If two are lit, it’s 50% to 75% full. Once all the lights are off, your battery needs to be charged.

On the other side, you’’ve got all of the controls. The layout is similar to the click wheel on the classic iPod. In this case, it doesn’t rotate. The power button is in the center. Tapping the left or right buttons adjusts the volume. Holding the buttons skips or rewinds the track. The lower button is used to play or pause the music, while the upper button answers or disconnects a call. Above the controls is a bright white LED that tells you when the speaker is turned on.

This design is the perfect balance between functionality and ease of use. It’s appealing to look at, but you’ll never spend time wondering how it works. 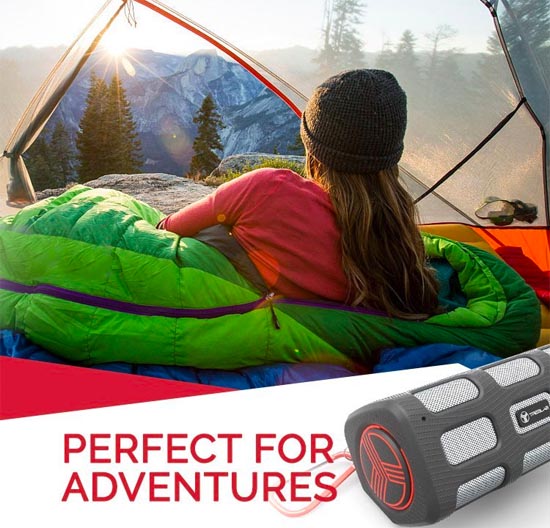 One of the key advantages of this speaker is it’s durability. According to Treblab, it’s waterproof, shockproof, and shock resistant. All the things you’d want in a high quality outdoor speaker, right?

Unfortunately, Treblab didn’t have the speaker IPX certified. This isn’t necessarily a bad thing, but it means that you don’t know exactly how much exposure to the elements it can withstand.

We tested it a few ways. We splashed it with water, at first just giving it a light mist from a spray bottle. Eventually we moved on to throwing cups of water at it. It continued to work flawlessly. We wouldn’t recommend fully submerging it in water, as it’s unlikely to survive this. Additionally, you need to have the port cover on for the device to be fully waterproof. If you’ve got anything plugged in, water could get in the USB port and short it out. But as long as it’s closed, you can continue to use the speaker as normal. 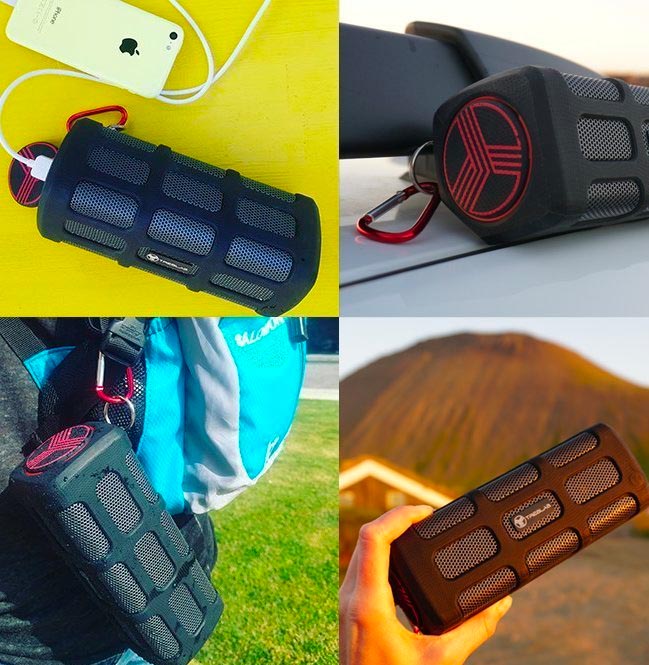 For the drop test, we started on a soft surface. First, we dropped it from three feet onto carpet with no issue. We tried again from six feet with the same result. Then we repeated this on our concrete driveway. From a 10-foot distance, we noticed a little ding in the rubber. At this point, we also heard a pretty solid “THWACK” as it hit the ground. It did bounce a little bit, likely because of the rubber. In spite of this, we’re pretty confident that you’re not going to damage this speaker just by knocking it over. Short of hurling it onto the highway, you shouldn’t have any problems.

In the unlikely event that you do run into an issue, Treblab offers a lifetime warranty. As long as you haven’t obviously intentionally abuse it, any unfortunate accidents should be covered.

One of the most interesting features of the X100 is the fact that it supports 360 degree sound. Most speakers have the drivers facing towards you. This means that the sound is sent is a specific direction. It won’t sound as good if you’re standing behind it than it would if you were in front. Instead, Treblab designed this speaker to offer 360-degree sound. The drivers are pointed at each other, with a deflector located in between them. This pushes the sound waves away from it in all directions, so everyone can hear it clearly.

We were impressed with the amount of kick this speaker had. The sound is very much a “get up and go” type of sound. It would work great for parties, sports, or any other activity where you want to hear energetic music. The bass did come at the expense of accuracy. Although you can hear the entire frequency range well, this isn’t the type of speaker you’d use to pick up the subtle nuances of your favorite music. Instead, it’s designed to be very loud and very powerful. In this regard, it doesn’t disappoint.

7000 mAh is huge for a Bluetooth speaker. In fact, many dedicated power banks only include this much power capacity. If you’re using it exclusively as a speaker, you can get a staggering 30 hours of use out of it before plugging it back in. Having this much battery is helpful if you’re heading out into the woods for a weekend camping trip, but it’s overkill for most day to day use.

Luckily, Treblab has a way to put all of this extra power to good use. It has a full size USB port that can be used to charge your devices. If you were using an iPhone 7 (which has a 1950 mAh battery) you’d be able to fully charge the phone twice, and still get over 16 hours of music playback. If you’re going to be away from a power source for a while, this feature is invaluable.

The range on this speaker wasn’t all that impressive. With our phone, the sound started to drop out after about 15 feet. Some Bluetooth speakers are capable of much longer range, so if you want to be able to walk around your house with your phone while streaming music from it, this may not be the best option for you. 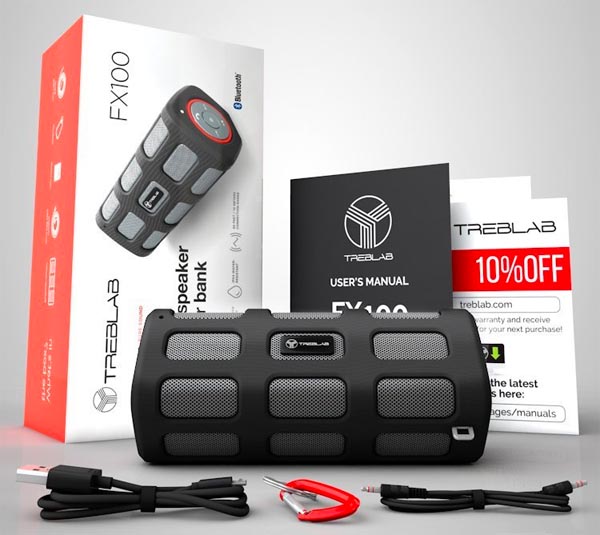 The Treblab FX100 has a lot going for it. It’s much more durable than the average speaker on the market. Additionally, it gets extremely loud. We’d recommend this speaker to anyone who wants something they can use outdoors. When you’re heading out camping for the weekend, or even if you work on a construction site, being able to charge up your phone is a huge advantage. In spite of all this additional functionality, you’re not spending much more than you would for a competing speaker. In the right environment, this speaker provides excellent value.

That being said, the Treblab FX100 isn’t the only option on the market. If you need better range, the DOSS traveler could be a good alternative. Additionally, the DOSS features built-in LED lights and has the ability to play music directly off an SD card. For some, this could be a better option.

Reviews of the Best Bluetooth Neckband Headphones for …
February 18, 2017