Chinese-made digital projectors have made a bit of a splash in the industry. Recent developments to the manufacturing process have allowed them to release hardware that is much cheaper, but surprisingly powerful.

In most cases, the best sellers tend to be so-called pico-projectors. These portable handheld units are cheaper than a television, and can create an image that’s much larger. For casual users to want to enjoy a big-screen movie night, the investment could be worth it. But portable projectors have their own sets of disadvantages, which has lead home-theater enthusiasts to look elsewhere.

The Wowoto H8 is a very different beast. It’s much larger than most portable projectors, and it’s definitely more expensive. But this models has a few key features that you don’t want to overlook. It’s a true HD projector, and doesn’t have to downscale to EDTV resolutions. It’s also much brighter than the competition. It also has a processor and runs a full copy of Android, making this a smart projector. Is this a good option for full time use? All signs point to “yes.” But there are many cases of deceptive advertising in this industry, so to find out we had to try it out for ourselves.

The H8 ships in a compact, but somewhat decorative box. Inside you’ll find a remote control, batteries, a power cord, an AV cable, and a manual. This is one of the first Chinese-made projectors we’ve tested that actually had a good manual. Sure, there was the occasional grammatical error here and there. But it’s completely legible, and the information inside is helpful. Most of the projectors on the market are simple, so we’re not worried about the manual. But since this one has it’s own operating system, having a guide to the features is essential.

The projector itself was much smaller than we had first expected. It’s a little larger than most of the portable models we’ve tested, but smaller than professional models. It’s a two inches thick, but the same height and width as an iPad mini. Other than a few buttons on the top and a focus ring, there isn’t much to the enclosure itself. Because the controls are offloaded to the remote, we had no concerns about this. 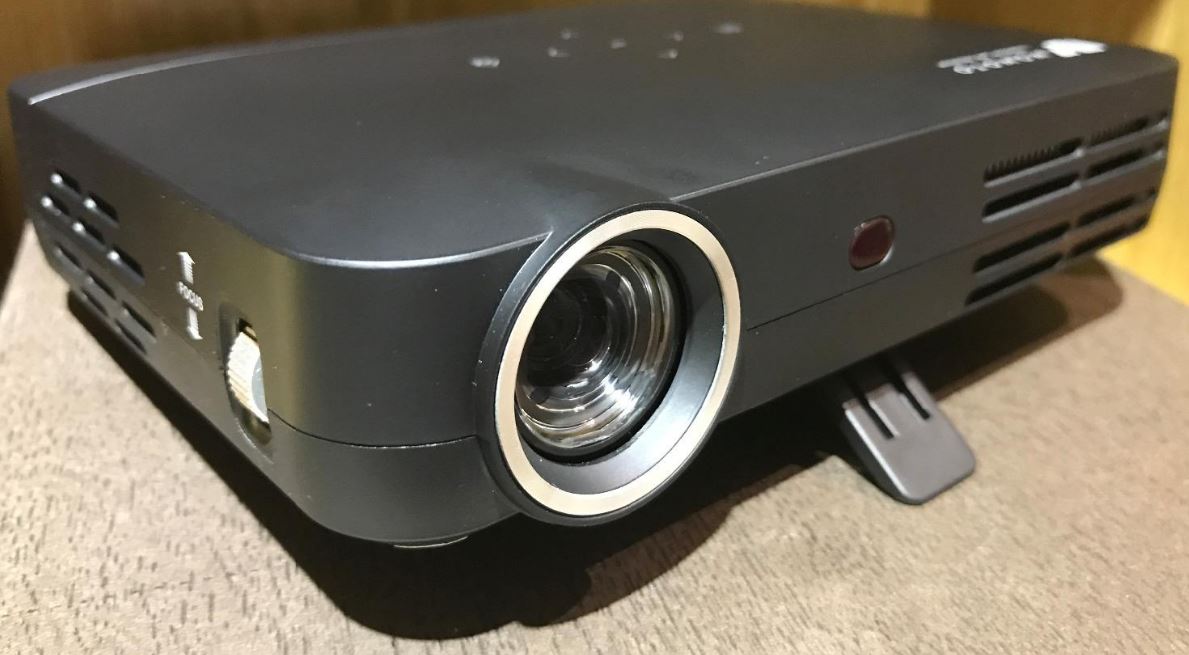 Visually, this is a pretty plain unit. The plastic enclosure is all black, and there are cooling vents located on three sides. It’s much lighter than we expected, but doesn’t feel particularly strong. It’s not something we’d expect to fall apart, but we would highly recommend that you use it carefully. If you were to trip over the cord and knock it to the ground, you’d likely cause some damage. That being said, gently bumps aren’t likely to cause a problem. There are four rubber feet on the bottom, which keep it fairly stable on a flat surface.

There were a few design elements that we liked. If you’re placing it on a coffee table or the floor, you’re going to want to tilt the projector upwards to keep the image eye-level. To do so, there is a fold-down leg that lets you adjust the height and angle of the projector. The focus ring is located on the side, which prevents you from bumping it and throwing off your image. If you do need to adjust it, the motion is smooth and slow – perfect for getting a precisely focused image. 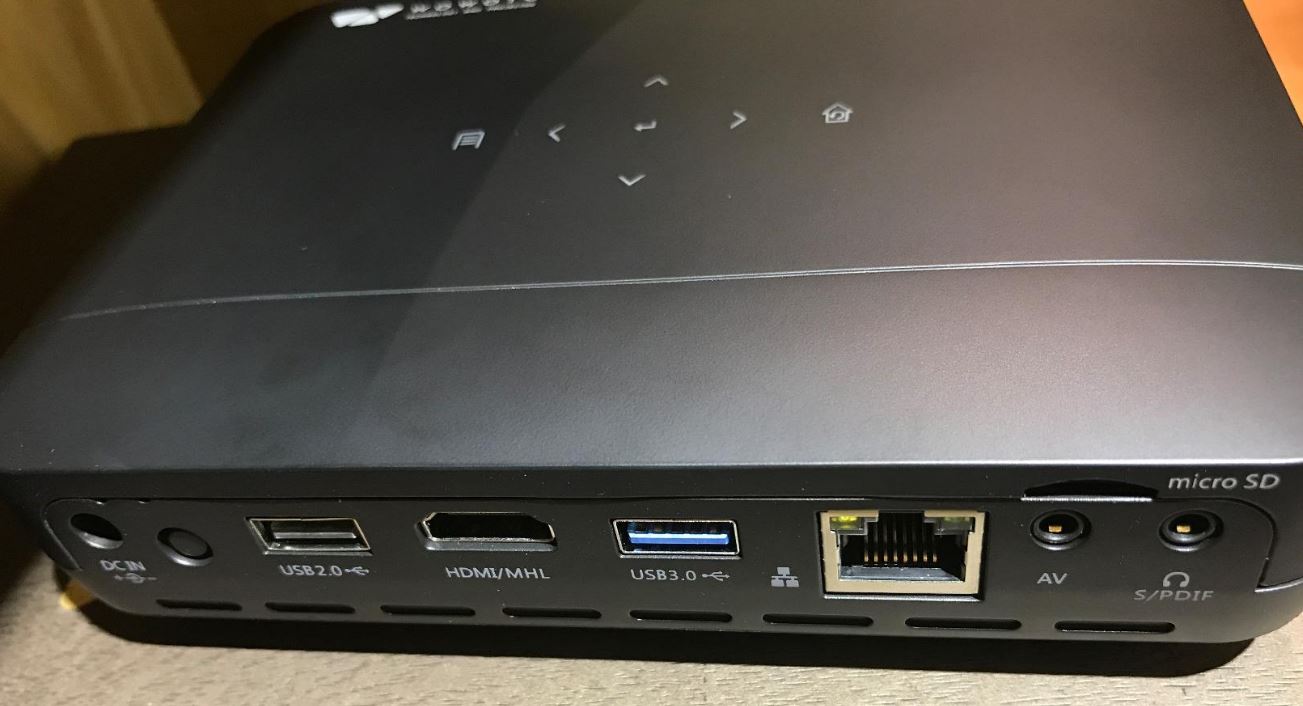 No matter what form your content is in, the H8 gives you a number of options to access it. The simplest choice is to connect a video source to the HDMI port. If you’ve got standard definition content, a composite input is also available. If you’re anything like us, a lot of your videos are in digital format. This is where the built in operating system comes in handy. You can use one of the two USB ports (one USB 2.0 and one USB 3.0) to access content off of an external storage device. Alternately, the SD card slot lets you grab video you may have pulled off your phone or digital camera.

With built-in Wi-Fi and an Ethernet port, loading video over the network is also available. This type of streaming is a little more complicated than just plugging a video source in, and requires use of the Android operating system to use. 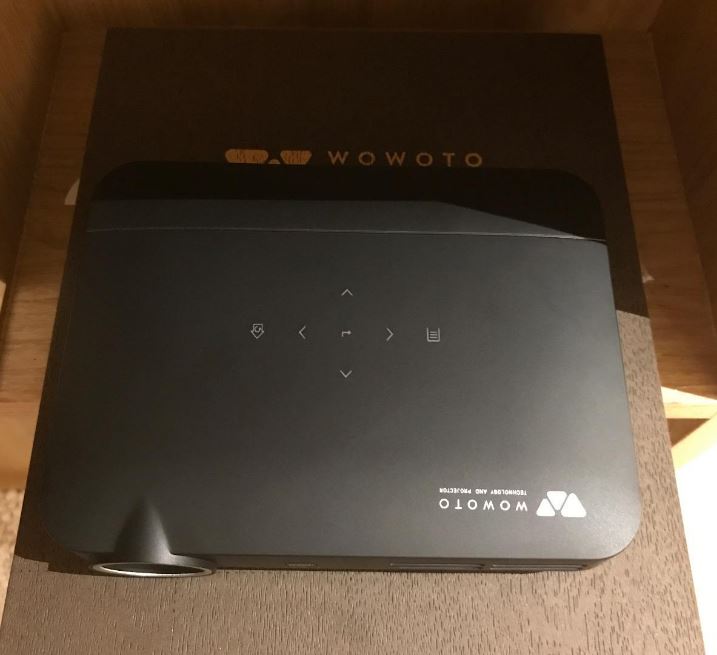 With a native resolution of 1280 x 800, this projector can display 720p HD content without any scaling. Technically, the horizontal resolution has an additional 80 pixels. This is because movies and television has a 16:9 aspect ratio, while computer displays often have a 16:10 ratio. If you’re watching HD content, the extra 80 pixels aren’t used. But if you want to browse the web or connect a PC, you’ll be glad that they’re there.

The end result is something that looks very sharp at large screen sizes. It doesn’t have quite the level of detail as a 1080p projector, but you’ve got to be doing some pretty analytical watching to notice. 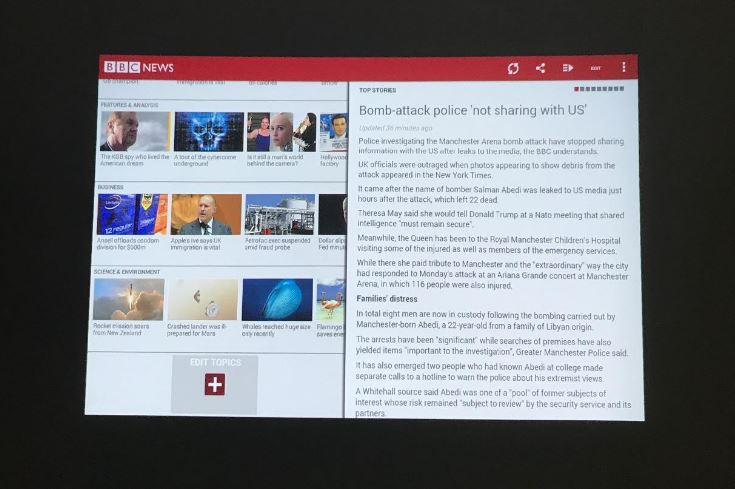 Even though the slightly reduced resolution doesn’t have a big impact on video quality, the brightness does. At 2000 lumens, this projector is significantly brighter than most competing models. Images are vivid and well defined, even in a room that is partially lit. Ideally, you’ll want to be able to dim the lights to use the projector. If you’re watching with all the lights on or in full daylight, the image will be a little more washed out. That being said, it’s still usable. And that is more than we can say about most compact projectors.

One key advantage of the LED backlight is the lamp life. Projectors that use incandescent bulbs typically last anywhere from 5000 to 15000 hours. With LED, you’re getting 30,000 hours of use or more. You can’t replace the bulb, so once it does you’ll have to buy a new unit. But even if you leave the projector on 24 hours a day you’ll get more than two years out of it. For more realistic use, 5 years is a realistic expectation. In our eyes, you’ll want to upgrade before the lamp dies anyway. 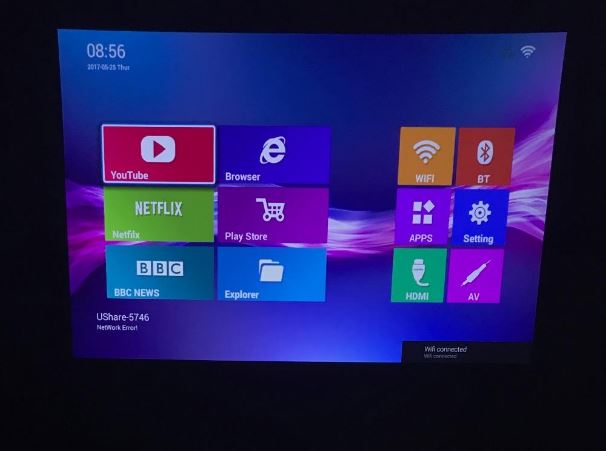 With a fully featured version of Android, there are a number of smart features available. It’s worth noting that this isn’t an ordinary flavor of android. It’s been custom designed to work with this projector. Because it’s running a 1Ghz Cortex CPU with 1GB of memory, modern Android would be a little buggy. The version here is based off of Android 4.4, which provides a reasonable amount of compatibility.

You’re not going to be able to run every app in the Play Store. However, most of the apps you’ll want are available. Netflix, YouTube, and BBC news are all available. If you want to go online, a browser is also available. Strangely enough, the browser uses the Internet Explorer logo. But rest assured that this is the standard WebKit browser. 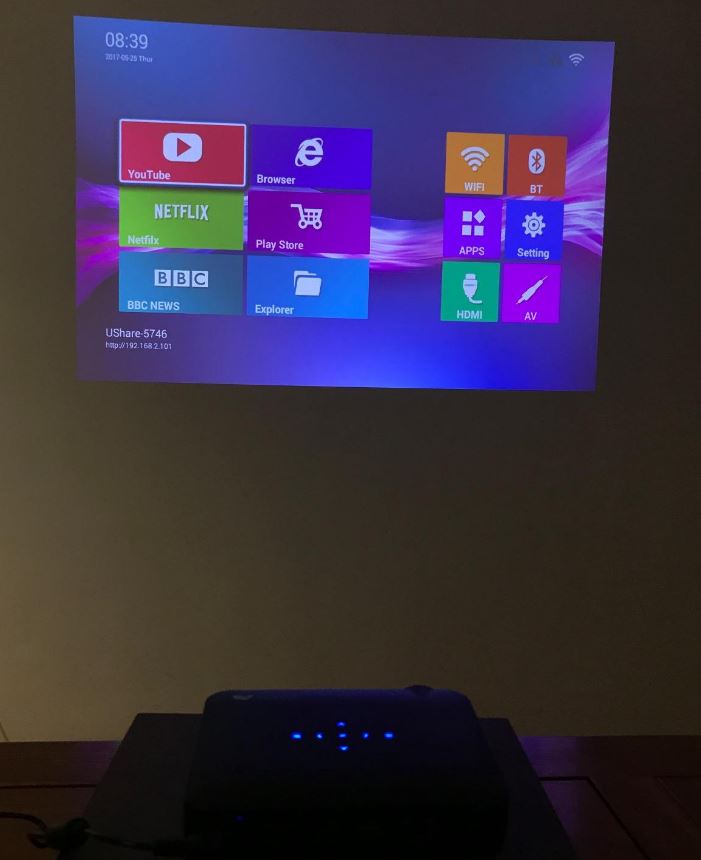 By accessing the Bluetooth menu, you can pair the projector with an external device. This can be a wireless speaker for audio output, or you can pair your mobile device as a video source. The app comes with MX Player to access video files, or you can use a screen sharing application to mirror your phones display. AirPlay, USHare, and DLNA are all supported.

The projector uses its own custom built interface, which makes navigating around the menus with the remote much easier. But you will occasionally run into issues with apps that don’t support the interface. Our recommendation is to use the operating system to play back media files or browse the web. If you want to use custom apps, take advantage of the screen sharing feature and run the apps on your phone. 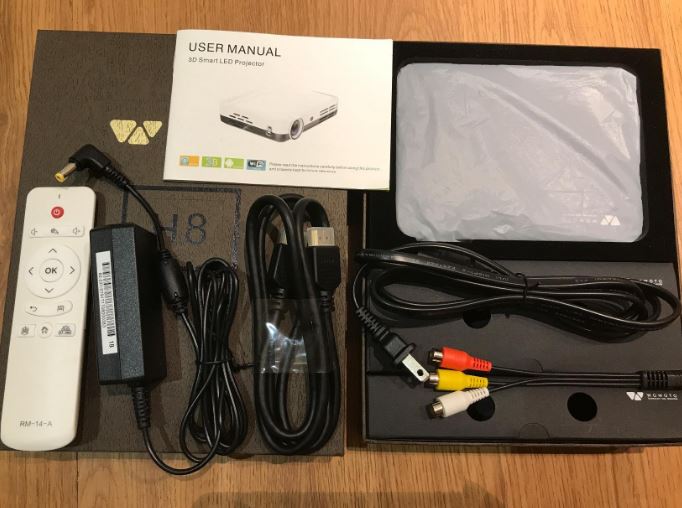 When you buy a projector from a well known brand, you’re getting something that’s gone through a lot of research and development. We’ve become accustomed to a polished interface and a perfect user experience. This projector has a lot more features than any Chinese import we’ve tried, but you don’t have the same polished effect. There were a few occasional glitches or errors. You might find an app that doesn’t work. All of this considered, we didn’t come across anything that was deal-breaking. But this is something you should be prepared for.

If you’re looking for a projector to use as your primary video source, the Wowoto H8 could be a good option. It’s got a proper HD resolution, and the brightness means that you won’t have to make any compromises. This alone is rare to find at this price level, and the inclusion of the Android operating system makes this one incredible deal.

You are going to make a few sacrifices. The video quality isn’t perfect, and the interface could use a little work. But with all that in mind, you’d have to spend significantly more money to get anything even remotely comparable. For consumers on a budget, this is an option that we highly recommend.