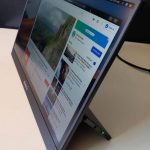 Most people think of monitors as stationary screens you use in conjunction with desktops or gaming consoles. In fact, laptops are always made with monitors attached to their keyboards solely because most people don’t think that having separate, mobile monitor is a worthwhile idea.

In reality, people often need a monitor they can take with them that separates from the main computing device. For instance, what if you need to give a presentation but there isn’t a projection-worthy screen or surface, or if you don’t have a projector? Or maybe you have a laptop, but want to showcase that presentation or some new media content on a screen that can really make the colors and high-definition shots pop.

In such cases, a standard laptop monitor often doesn’t make the cut. But even if a dedicated desktop monitor could do the job, lugging one of those around in your suitcase or carrying it at your side is a hassle. What if there was a mobile monitor that you could fold up like a laptop and using conjunction with any computing device?

Turns out, there is! Zissu’s Portable Monitor, in fact, combines all the usability of a laptop accessory with the high definition and visual quality of a dedicated desktop monitor. It’s easy to move, easy to store, and can be combined with most other computer, tablet, or streaming devices in just seconds. Let’s break down this lightweight gadget in more detail. 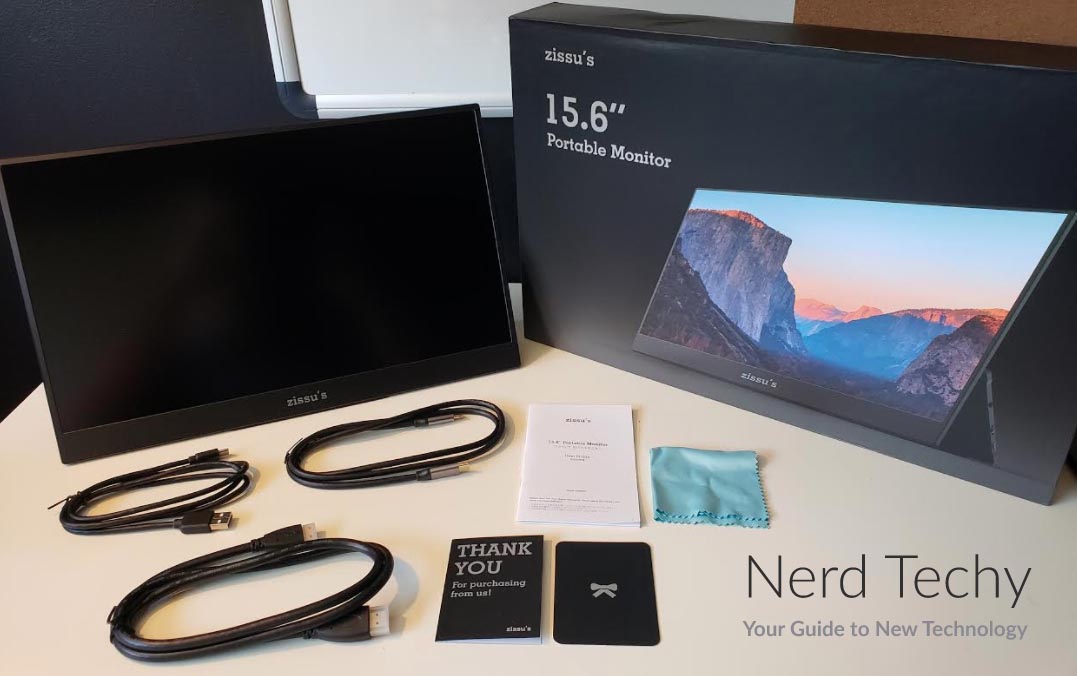 Many people decide whether a monitor is right for them based on its full dimensions or screen size, so let’s examine both. Zissu’s Portable Monitor comes out of the box with a 15.6” screen, plus an aspect ratio of 16:9. This is a fairly common screen size for desktop monitors and other mobile monitors – while it isn’t as large as many of the high-end gaming monitors out there, it’s more than suitable for combining with laptops or phones without being so big that its mobility is negated. 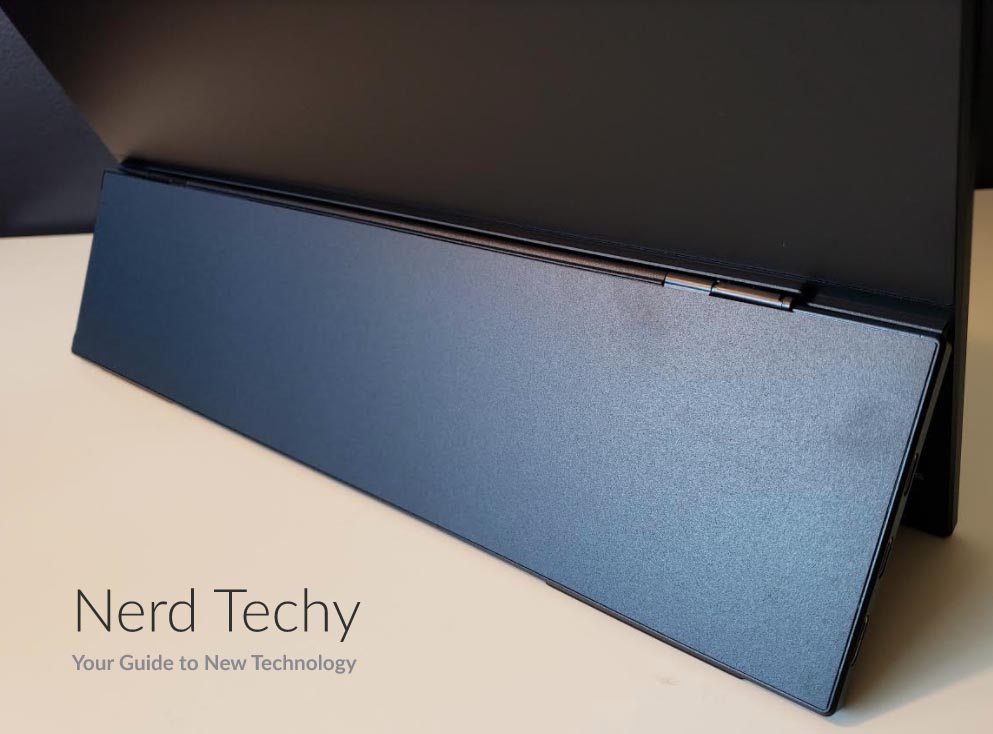 Speaking of mobility, one of the big draws for this portable monitor is that it’s so easy to carry around. With a slim frame and light weight of just 1.7 pounds, it’s extremely easy to carry this with you under your arm or by stuffing it into a backpack or bookbag. It barely weighs more than a physical book and doesn’t take up much more space than a typical laptop – in many comparisons, it’ll actually be a little thinner since there isn’t an attached keyboard to worry about.

The screen does come with an adjustable stand built into its bottom. This allows you to tilt the display for ergonomic and comfortable viewing angles – of course, Zissu’s Portable Tablet allows you to instantaneously swap between landscape or portrait views depending on what works best for your projected media or your current viewing angle. The screen itself barely has a frame to speak of, so your viewing experience isn’t marred whatsoever by bulky borders that draw your eye away from the action or color on the screen.

All told, it’s one of the most comfortable portable monitors to use on the market and is far superior compared to trying to lug a classic desktop monitor to your classroom presentation. 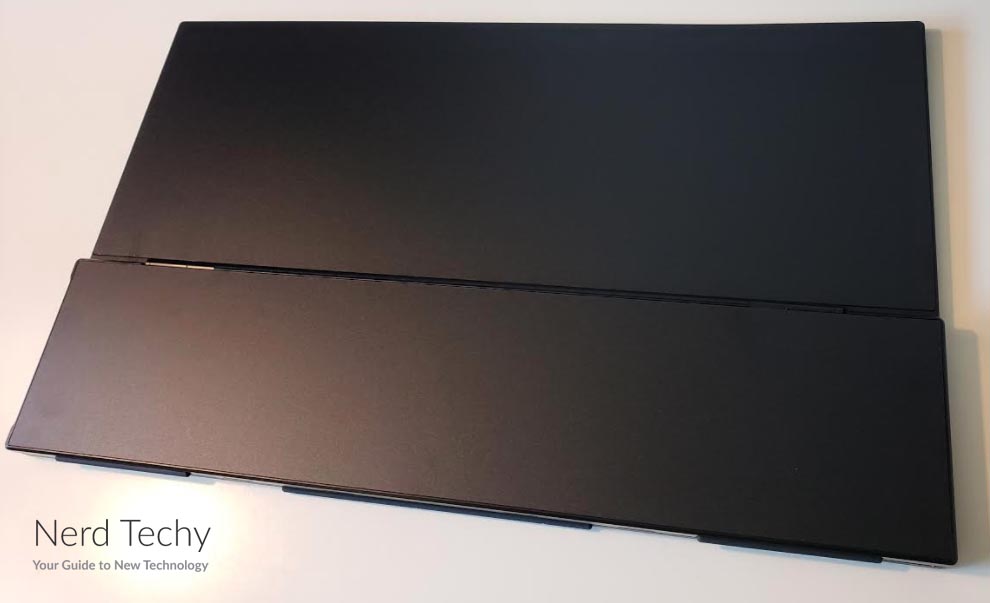 All of the above aspects aren’t worth much if the monitor doesn’t produce a picture worth bragging about. Zissu’s doesn’t disappoint in this area, although we do have to point out that plenty of high-end laptops and tablets these days provide more raw resolution by default. Zissu’s comes with 1920 x 1080P resolution, though this is adjustable and downgrades automatically based on the projected media. You’ll also enjoy a refresh rate of 60 Hz and a 30 ms response time. 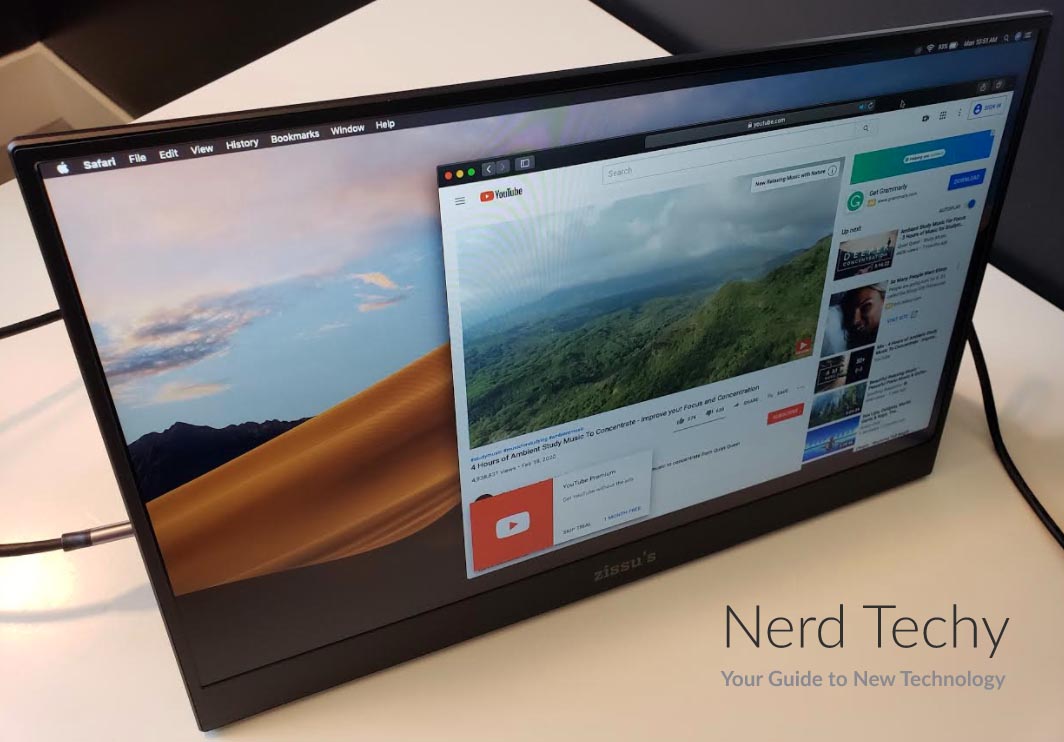 The last attribute means that this monitor isn’t a particularly good choice for pairing with a gaming console if you want to be competitive. The lag time you’ll experience simply eliminates any competitive chance you have compared to other dedicated gamers. Still, the above resolution and other visual factors, plus 252K colors offered across the display, mean that it’s an ideal candidate for work or school presentation needs. 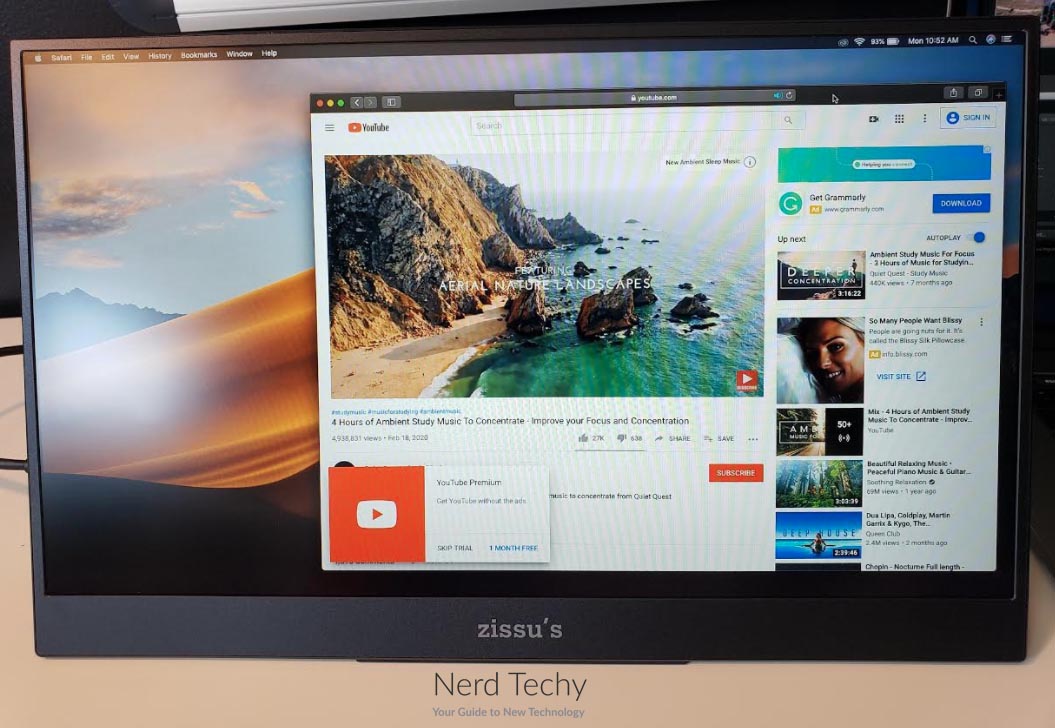 It won’t necessarily win any awards for being the best movie-viewing screen or gaming monitor. However, it provides better viewing potential compared to many built-in laptop screens and is certainly better than what most phone screens can manage, even when you don’t account for size. For this reason, we think it has a place as a commercial monitor for general use or for giving presentations, showing off media content, or hosting business meetings by streaming live footage from your phone or tablet to the larger monitor’s surface.

Furthermore, viewers will benefit from a 178° full viewing angle. Put in simpler terms, people even off to the side of the screen should be able to view the full glory of the high-resolution display and wide color palette without seeing a noticeable drop in visual quality. 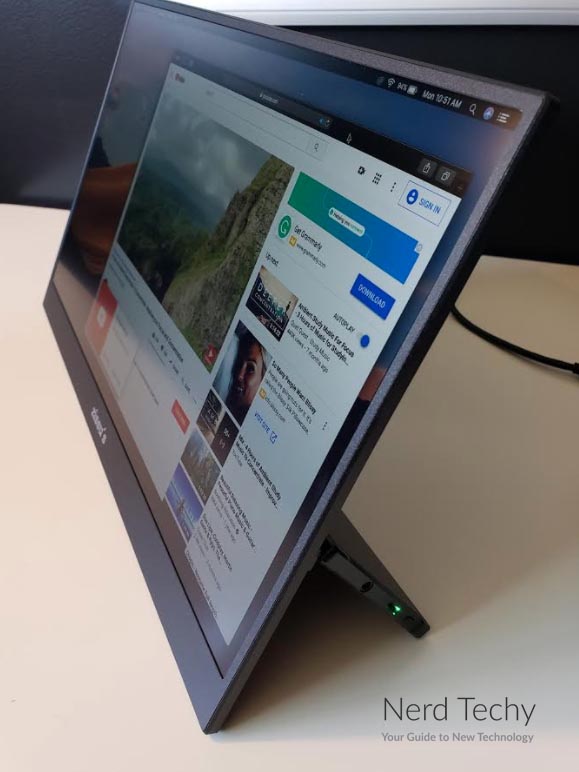 You can connect this portable monitor through twin full-featured USB-C ports. This should allow you to pair the monitor with most modern devices, including mobile phones, laptops, and even some small gaming devices. Additional HDMI and many HDMI ports are available for further connection versatility. The monitor is also powered through a USB port, but here’s the biggest downside for the entire set up: the monitor doesn’t come with a battery, meaning you have to plug it in to a device display your media content. 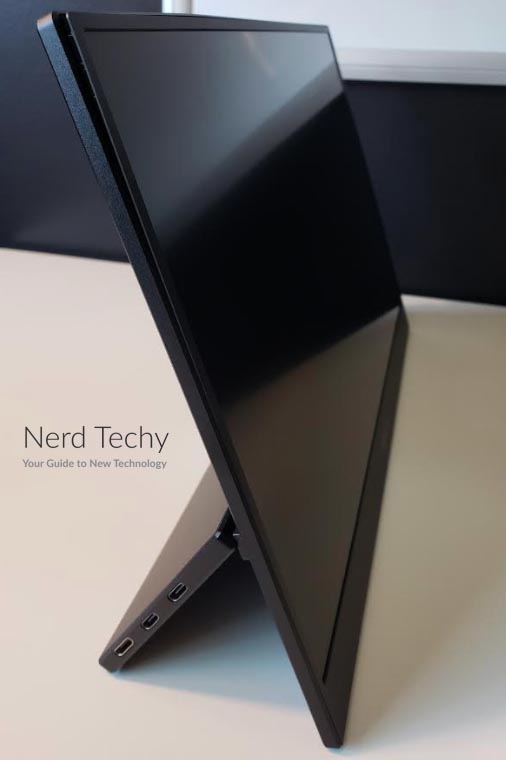 Still, Zissu’s Portable Monitor works with a wide enough variety of mobile computers that, in aggregate, the power issue won’t be a big deal for most. What’s the full list of compatible laptops? There’s almost too many to count, but many of the most popular laptops from manufacturers like Apple, Microsoft, Lenovo, HP, Dell, Google, ASUS, Nvidia, Razer, and more are perfect combinations with this mobile screen. Similarly, phones from Apple, Sony, Samsung, and other manufacturers fit the bill at the time of this writing. 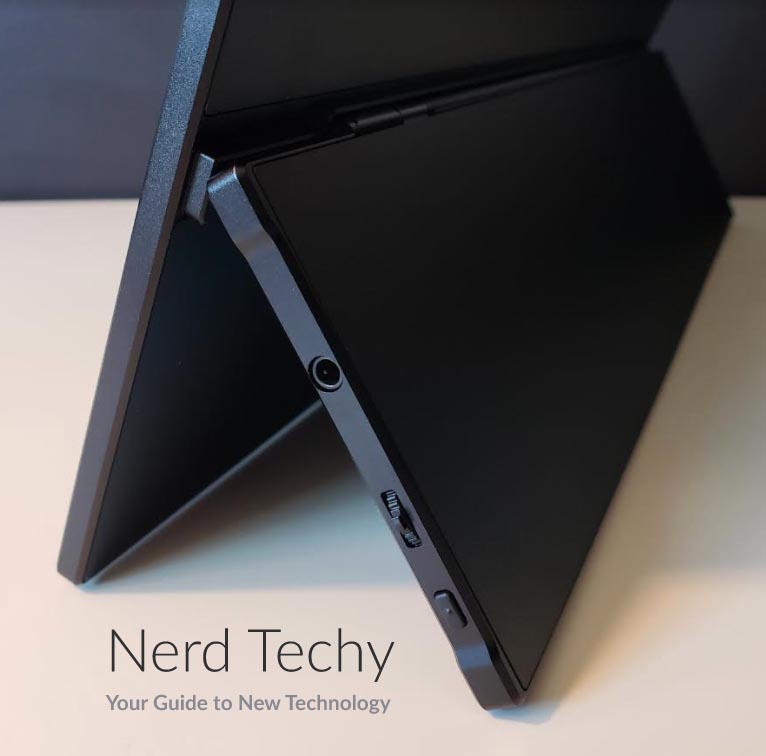 What’s more is that the list of compatible laptops and other devices you can use with Zissu’s portable monitor is constantly growing as they add new software updates. First on the list are gaming consoles like the Xbox and PlayStation series.

Lastly, Zissu’s Portable Monitor comes with a single 3.5 mm audio port. Thus, it may be a good idea to pair mobile speakers with this portable monitor if you want to broadcast media with any real auditory punch – the built-in speakers can be a bit tinny and underwhelming. 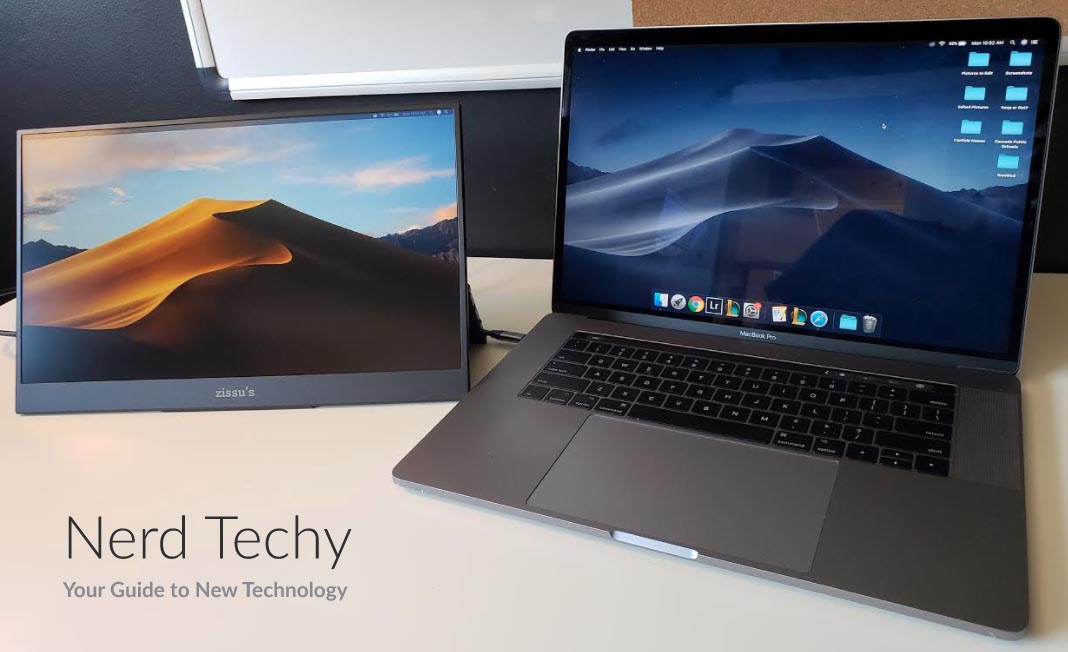 The portable monitor does come with a few extra accessories, including at least one cable for every type of port included in its design, plus a user guide kit and a screen cleaning cloth. These last add-ons push a little more value into the purchase as a whole.

Determining whether Zissu’s Portable Monitor is a worthwhile purchase for most is tricky. In a way, it’s quite versatile and will work for a variety of media viewing applications. On the other hand, the limitations you run into because of its inability to hold a charge mean that it’s something of a specialized device instead of an all-in-one viewing monitor you can use just about anywhere. 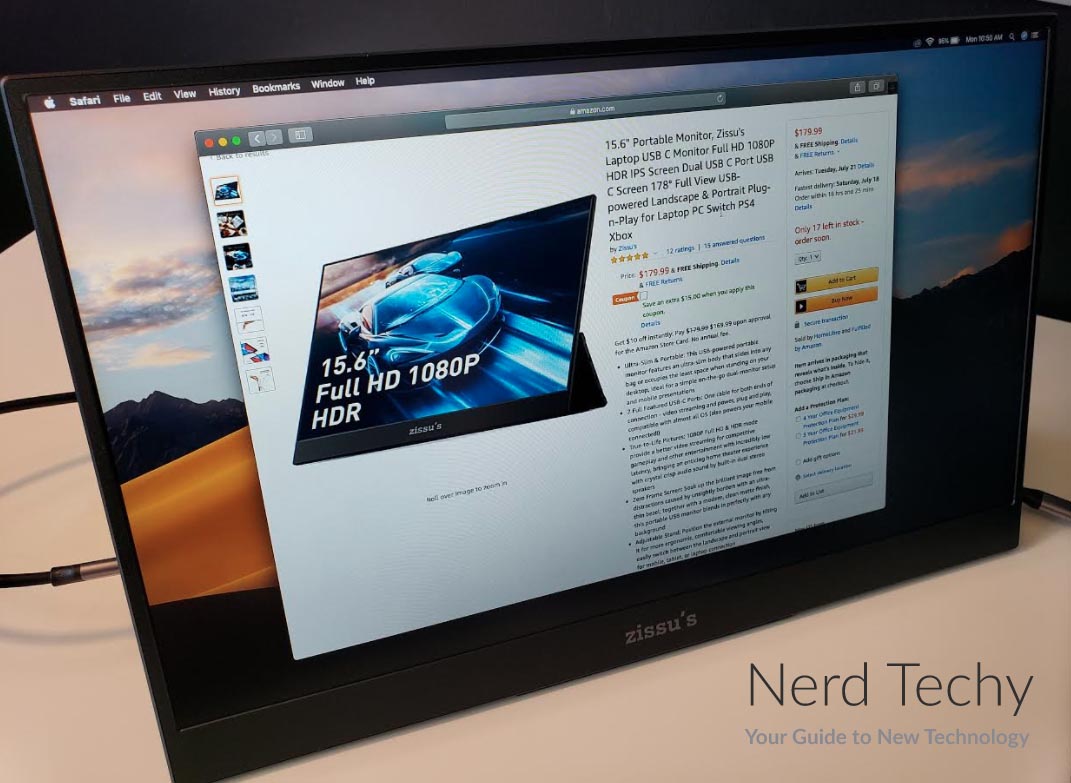 In our eyes, the portable monitor does serve a purpose, particularly in academia or for those who need to hold multiple business meetings per day and who don’t want to live stream on a small laptop or phone screen. There’s something to be said about viewing your coworkers on a screen large enough to really appreciate their presence, particularly in this day and age when telecommuting is much more common.

On the other hand, it’s not a very good monitor for serious gaming (despite what the manufacturer claims). Furthermore, it’s unclear whether it will be a good replacement for your standard laptop screen. There’s a very real possibility that you have a screen better than the 1920 x 1080P resolution offered here.

All in all, Zissu’s Portable Monitor will be a win for some and a pass for others. Consider the overall asking price in relation to how often you might actually use it before buying. If you think you’ll get daily (or even weekly) use out of the portable monitor, it might well be worth your time. However, it’s too pricey and too specific for those who might only get occasional value from its functions.