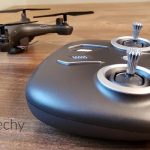 Over the past few years, drones have been getting more and more popular. Once a niche hobby, you can now find a drone in many American households. There have been two reasons for this. To begin with, prices have been coming steadily downwards. Whereas a drone used to be an expensive luxury, you can now buy one for the cost of an RC car. For another thing, drones have been gaining more features. Faster wireless connections allow you to remotely view your drone’s camera. Not only that, but modern drones can also be semi-automated using GPS. So not only are drones more affordable, but they can do more for you.

That said, this is a relatively new type of technology for most people. Unless you used to fly remote-controlled airplanes as a kid, it can be tough to get the hang of. And unless you’ve already owned a drone or two, it can be impossible to tell which ones are worth buying. You want to find a drone that’s easy to control, and comes with the features you need. If you’re not careful, you could end up with a useless white elephant. Thankfully, we’re here to help you find the drone that meets your particular needs.

Today, we’re going to review the ATTOP W10 Drone. This is an affordable drone that’s designed primarily for children and first-timers. It’s made to be as easy as possible to operate, so you don’t have to be an expert to pilot it. It’s also ready-built for taking videos, and pairs easily with your smartphone. But those are just a few of the factors we need to consider when we’re evaluating a drone. We’re about to look at all aspects of the W10, from the physical construction to the controls to the batteries. Only then will we have a complete understanding of how it functions. Let’s get started, and see what we learn! 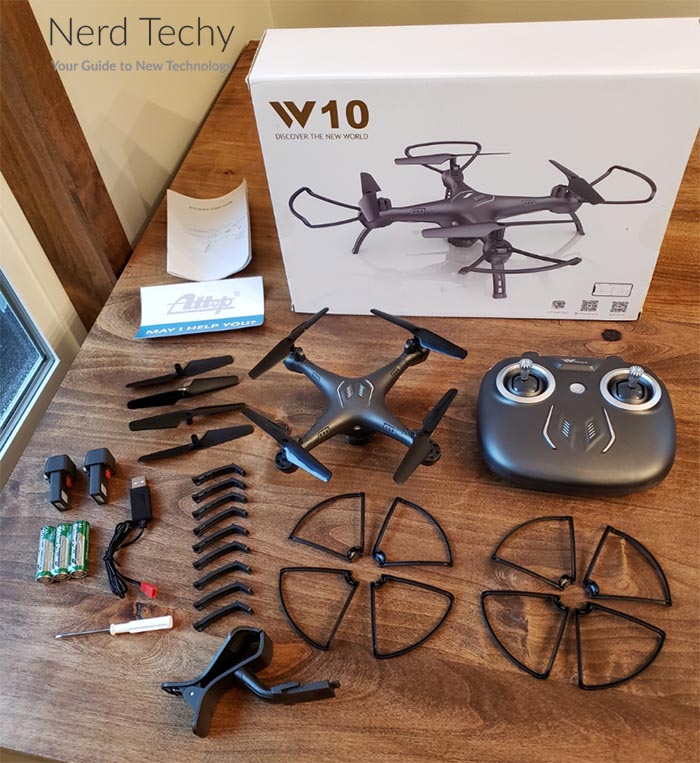 The ATTOP W10 Drone has a classic, X-shaped quadcopter design. The housing is constructed from black plastic, with a scuff-resistant matte finish. It seems durable enough, and can easily survive a minor crash. You wouldn’t want to fly it into a brick wall at full speed, or drop it from 100 feet. But for most purposes, you won’t have to worry about serious damage. The total size of the drone is 11.5 inches wide, 11 deep, and 2.7 inches high. Despite the size, the total weight is only three ounces without the battery. This makes it easy to carry, and it requires little power to keep it aloft. 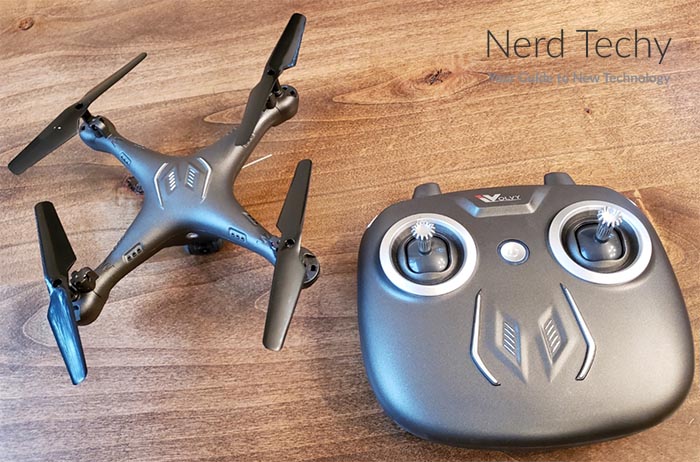 At the end of each of the drone’s four arms, there’s a small plastic propeller that provides lift. The four propellers are all positioned in motorized mounts, which can tilt in any direction. This allows the drone to navigate, by pointing the propellers to one side or another. It’s a tried and true design, and it works reasonably well in the W10. That said, the light weight of the machine does have its downsides. There’s simply not enough power to push back against moderate to strong winds. If there’s anything more than a light breeze, you probably don’t want to fly. 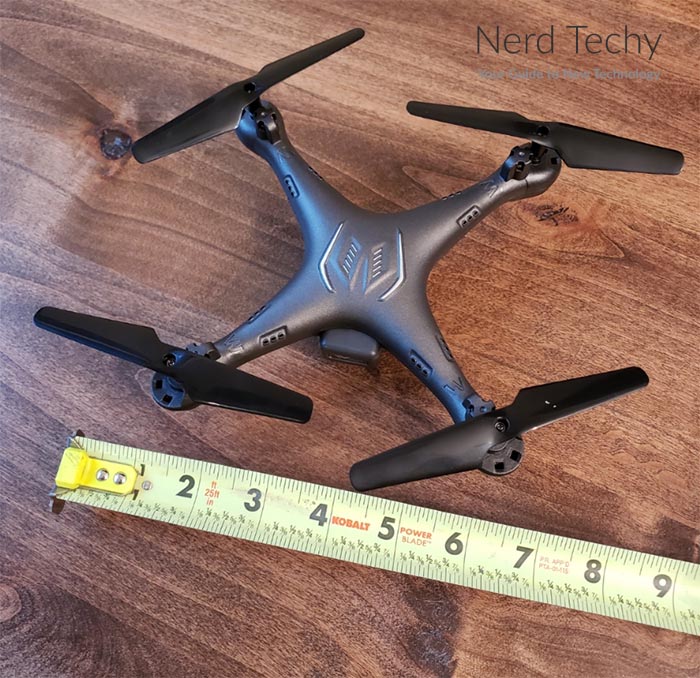 In the bottom of the center of the housing, there’s a small camera, which faces the front of the drone. This camera is kept clear of the ground by four legs, one on the end of each arm. The legs are thin and lightweight, but more than enough to support the ultralight drone. The only other feature of note is the set of protectors around the propellers. These aren’t foolproof, but they help keep little fingers clear of the spinning props. They also protect the propellers from getting damaged in a collision. 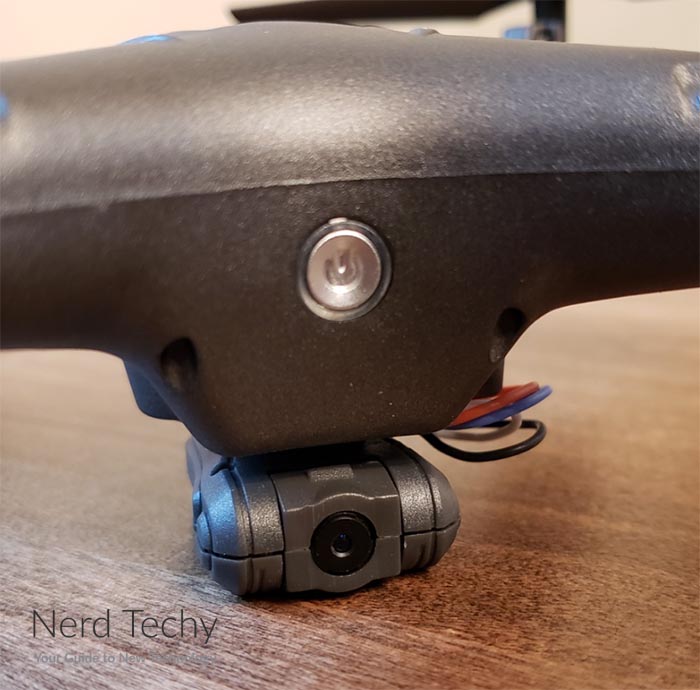 No drone is complete without a control scheme. To that end, the kit includes a handheld controller, which is constructed from the same black plastic. It has a rectangular shape rather than a console-style controller shape, which was an odd choice. Still, it’s comfortable enough to hold, especially if you’ve got larger hands. There are a pair of thumb sticks, as you might expect. Between them, there’s a land/home button, with a pair of sliders below that. Out of the box, only the button will actually function. You’ll actually be controlling the drone via the smartphone app. 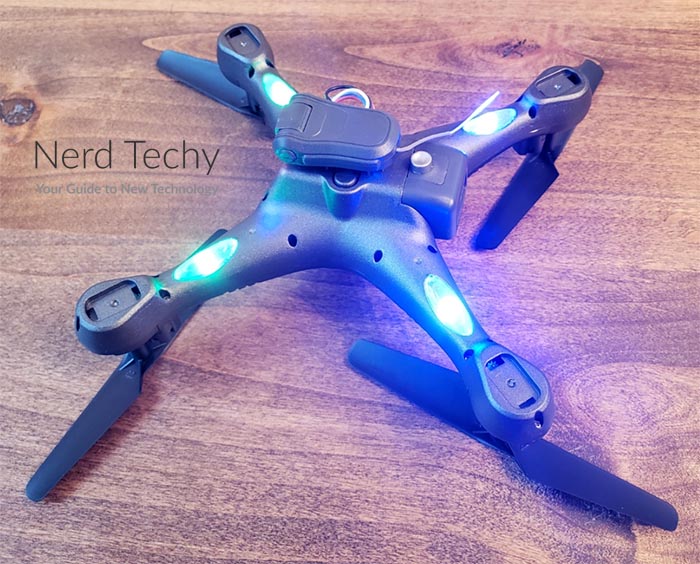 Thankfully, there’s a smartphone holding bracket on the front of the controller. Not only does this give you easy access to the app, but it lets you monitor your drone camera while you fly. The app is free to download, and you connect to the W10 drone via WiFi. When the drone is powered on, it will function as its own hotspot, and you can connect from your phone. The signal has a range of 30 meters, or just under 100 feet. Keep in mind that this includes altitude. If you’re 100 feet away and 30 feet in the air, you’ll probably be out of range. 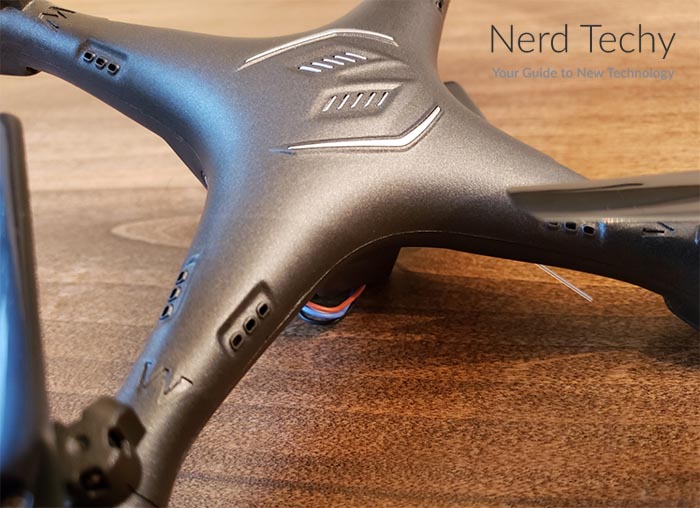 Thankfully, you don’t normally have to be in active control. Using the app, you can draw out a route on the map. Then, you can simply press the button, and the drone will automatically take off and start flying. Another way to launch the drone is to simply toss it into the air like a frisbee. Just make sure it’s powered on, or that method won’t work. The W10 also supports voice controls. Just say “take off,” and it will take off. Say “landing,” and it will land. These automatic controls make the physical controls more or less redundant. That said, you still don’t want to get too far out of range. If the drone starts flying into a tree, you want to be able to tell it to land. 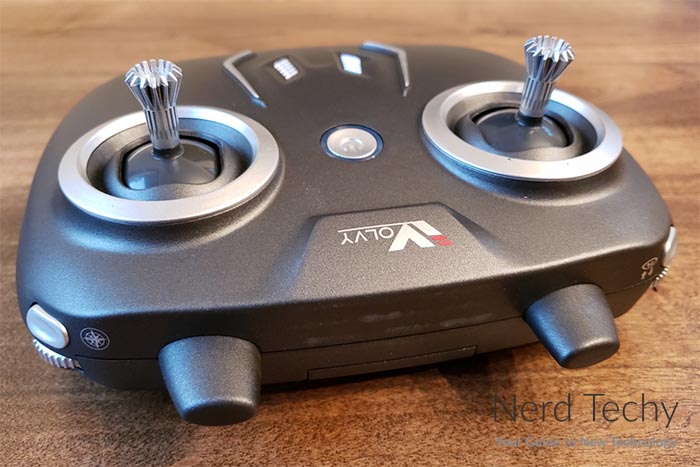 The ATTOP W10 is primarily designed for children and beginners. It flies slowly and remains level, so it’s fairly difficult to crash. This is all well and good, as far as it goes. Unfortunately, the automatic functions are a little bit buggy. In practice, the drone will often wander off on its own, and doesn’t always return to you. This isn’t a problem if you’re flying in a big, open area. But in an urban setting, it can become problematic. If you’re willing to pay more for a more reliable beginner drone, consider the Potensic D58. It’s far less buggy, and it’s exceptionally durable. That said, it does cost more, and there are no blade guards to protect children’s fingers.

In addition to the app controls, you can also unlock what ATTOP calls “headless mode.” Headless mode means that the physical controls are unlocked and you can manually fly your drone. It’s called “headless,” since the front of the drone is no longer locked in a horizontal position. You can perform 360-degree flips, or otherwise move the camera to get the perfect picture. If you want the genuine drone experience, this is what you’ll want to do. Just remember, you’ll be more likely to crash the drone in this mode. 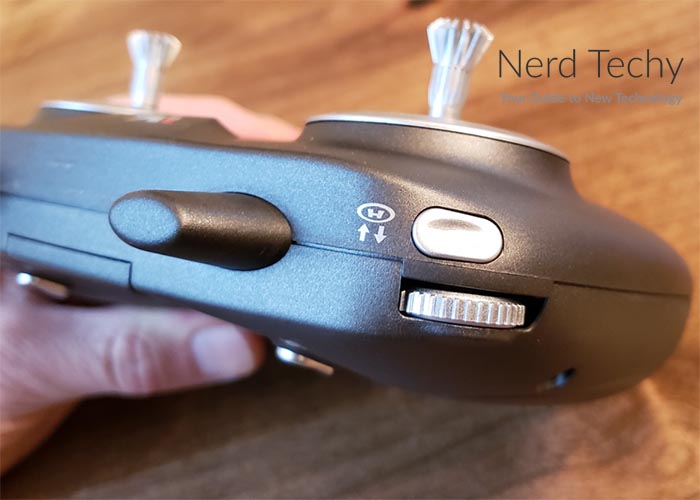 The W10’s camera records in a resolution of 1080p full HD. This is the standard for most modern drones, and gives you all the resolution you need for most purposes. It’s certainly good enough for live viewing on any modern smartphone screen. But it’s also the most you’ll need for social media or sharing. Not only that, but the image quality is surprisingly good for the price. Colors are rich and vibrant, with plenty of clarity. Greens in particular are nice and rich, which is important when your camera is often looking at the ground. There’s no night vision, though. Then again, night vision shouldn’t be a major concern. Who wants to fly a drone at night, anyway? 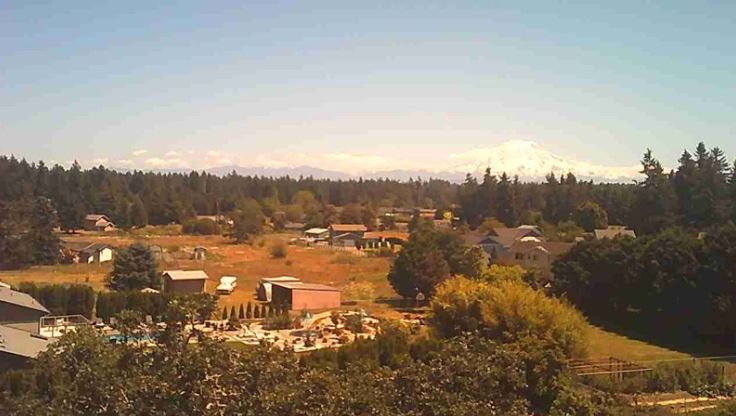 That said, there are applications where you might need much sharper resolution. 1080p is fine for recreation and social media. But for proper aerial photography, or for making any kind of prints, you need a lot higher resolution. If that’s what you’re looking for, check out the ROVA Flying Selfie Drone. It produces beautiful 12MP images, which is better than 4K. It also automatically zooms around you and snaps dozens of pictures by itself. That said, it doesn’t record video. There’s also no GPS mode, so you can’t actually control how or where it flies. 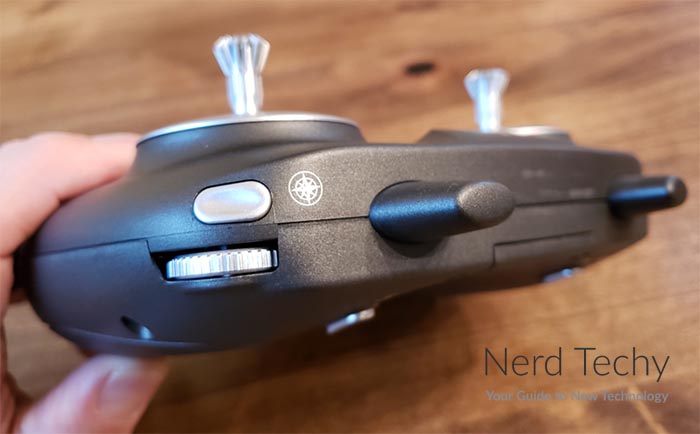 Battery life is a major consideration when you’re looking at any drone. This only makes sense. The longer your battery lasts, the more you can fly around before you have to take a break. The batteries for the W10 last for about 9 minutes, depending on how hard you’re pushing the drone. This is about average for a modern camera drone, neither overly long nor too short. However, the kit actually includes two batteries, so you can switch them out. This gives you a total of around 18 minutes of flight time per charge. 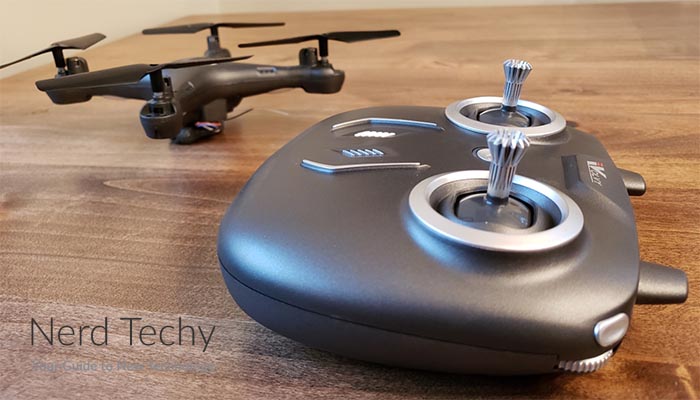 Not only that, but charging is fairly quick. Each battery will take only 60 minutes to charge from a fully dead state. That said, the charger is only good for a single battery at once. So if you want to charge both of them, it’s actually going to take two hours. This still isn’t bad, all things considered. But it’s something you should be aware of before you buy.

As you can see, the W10’s battery performance is reasonably good. But what if you need a drone that lasts even longer? In that case, take a look at the Potensic D85. Its battery will last for a whopping 20 minutes, which is pretty impressive. It also comes with a carrying case, but it costs significantly more than the W10. 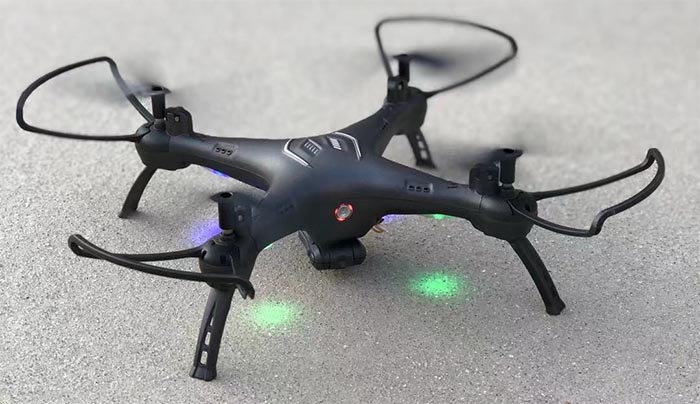 The ATTOP W10 Drone is a solid choice for children, or for anyone buying their first drone. The automatic features are a bit buggy. However, they serve as a bridge for you to gain experience before taking manual control. You also get dual batteries, as well as a safe, sturdy design. All in all, this is a great beginner drone.