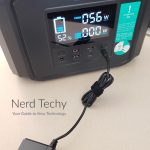 These days, we need our electronic devices more than ever. Even a few decades ago, a power outage was just a minor inconvenience. At worst, you might have to buy some ice to throw in your fridge. And outside of a flashlight, you wouldn’t even think of taking electronics camping. Nowadays, we rely on our smartphones, laptops, and other devices for work, play, and everyday life. When our gear isn’t working, it gets frustrating. Suddenly, we can’t do our banking, or even order out for food. Which makes it all the more frustrating when a power outage leaves you without any juice.

But a good power station is about more than backup power. If it’s going to be versatile, it also needs to be portable. For example, let’s say you want a power station for a weekend of camping. You may only be walking a few yards between your vehicle and the campsite. You may be walking a long distance. The point is, there’s always going to be a tradeoff between size and power. For example, take the Aukey Basix Pro. This is a small power bank that opens and doubles as a phone stand. It’s small enough to carry in your pocket, but will only charge your phone a few times.

Today, we’re going to review a mid-sized option: the Aukey PowerZeus 500. This power station is designed with AC outlets and many similar features to full-sized power stations. At the same time, it’s not too big to carry around in one hand. This makes it suitable for transport, at least as long as you don’t have to carry it too far. But just because it’s medium-sized doesn’t mean it’s automatically going to be the mid-sized power station you need. To find out if it’s worth buying, we’ll need to go beneath the surface and look at how well it functions. We’ll discuss the design of the housing, the battery capacity, and the charging wattage. We’ll also talk about the safety features, and what you can plug into it. At that point, we’ll have a better picture of what we’re dealing with. 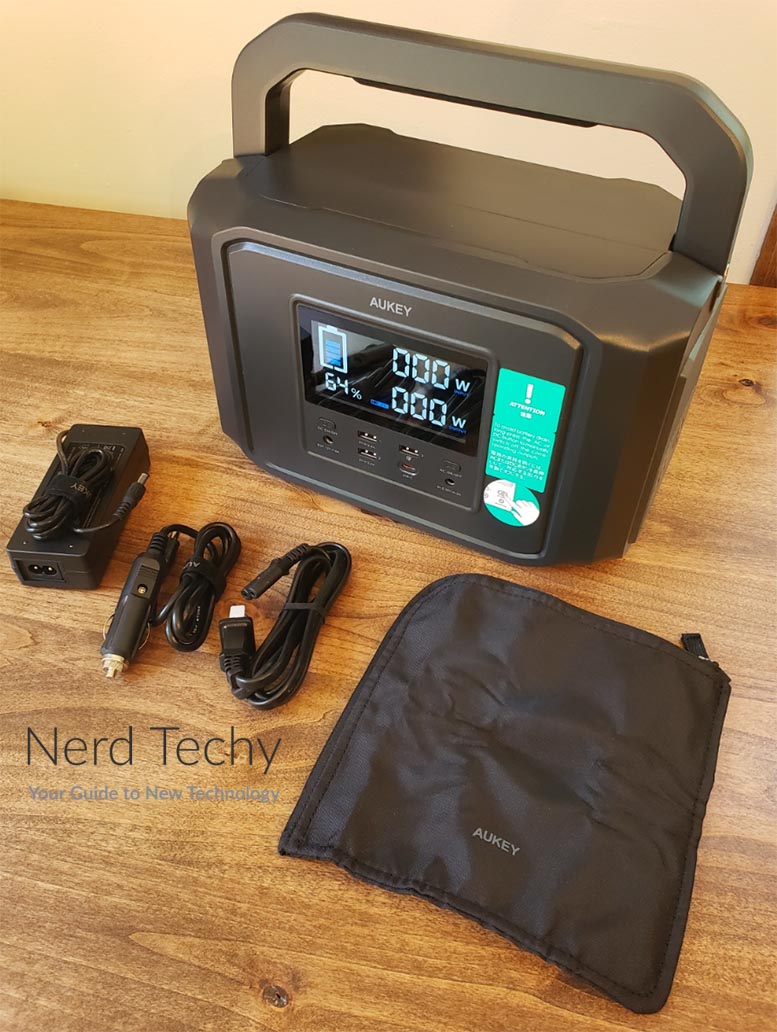 The Aukey PowerZeus 500 is a rectangular power station about the size of a mid-sized portable stereo. It’s constructed from black plastic, with total dimensions of 12.1 inches wide, 7.1 inches deep, and 7.6 inches high. The matte finish is understated and easy to keep clean, while the corners are slightly beveled for safety. There’s a handle on the top that folds to the back for easy storage. It’s all you really need to carry the entire unit, since the power station weighs only 14.3 pounds. This makes it easy to carry in one hand, leaving your other hand free for something else. 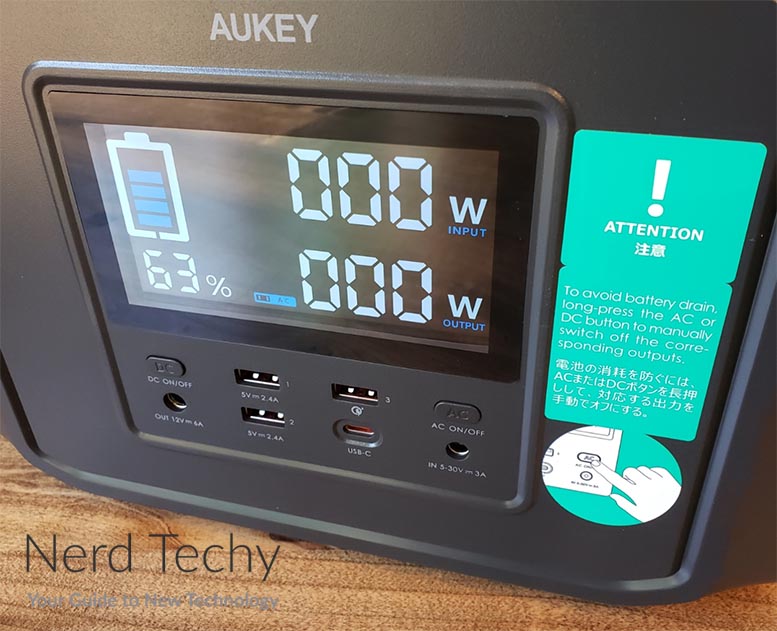 The sides of the housing are vented, which allows for plenty of air flow. This is essential for keeping the power station cool when it’s in use. The cooling system works very well, and can keep the power running up even in hot temperatures. That said, it’s important not to block the vents on the sides. This will restrict air flow, reducing the effectiveness of the cooling system. There are also plugs on both sides. On the right, there’s a pair of three-prong AC outlets. On the left, there’s a 12-volt DC outlet. Everything else is located on the front of the power bank. The back is entirely bare, while the bottom is occupied just by a few rubber anti-skid pads. 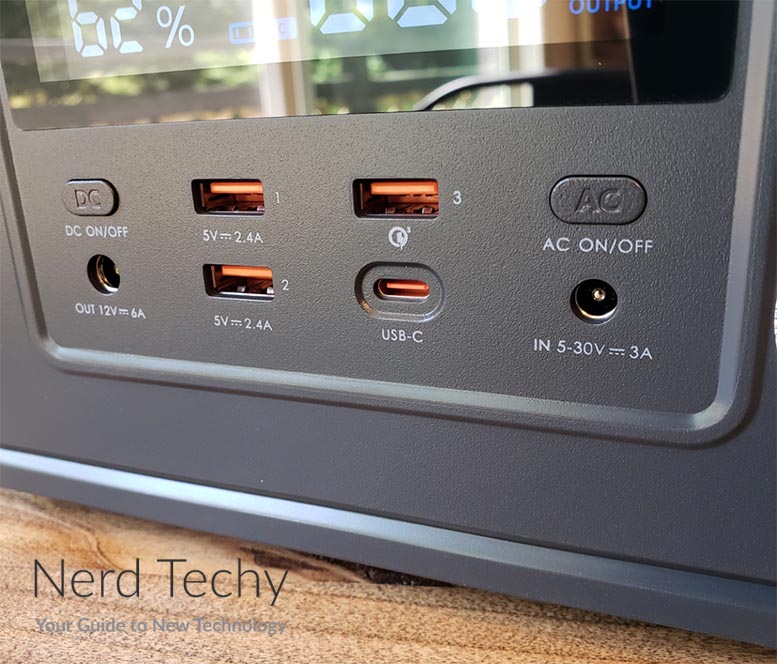 In the center of the front of the housing, you’ll notice a bright LED display. It’s easy to read, and shows you the information you need to know about your power station. On the right, you’ll see the current wattage currently being drawn by all your devices. In the same spot, you’ll also see how much wattage the PowerZeus is drawing for charging. On the right, there’s a percentage and visual readout showing you the current battery level. There are also indicators for temperature, air flow, and other safety features. You can even see which devices are plugged in and actively drawing power. This can help with troubleshooting, if you’re having trouble with one of your charging cables. 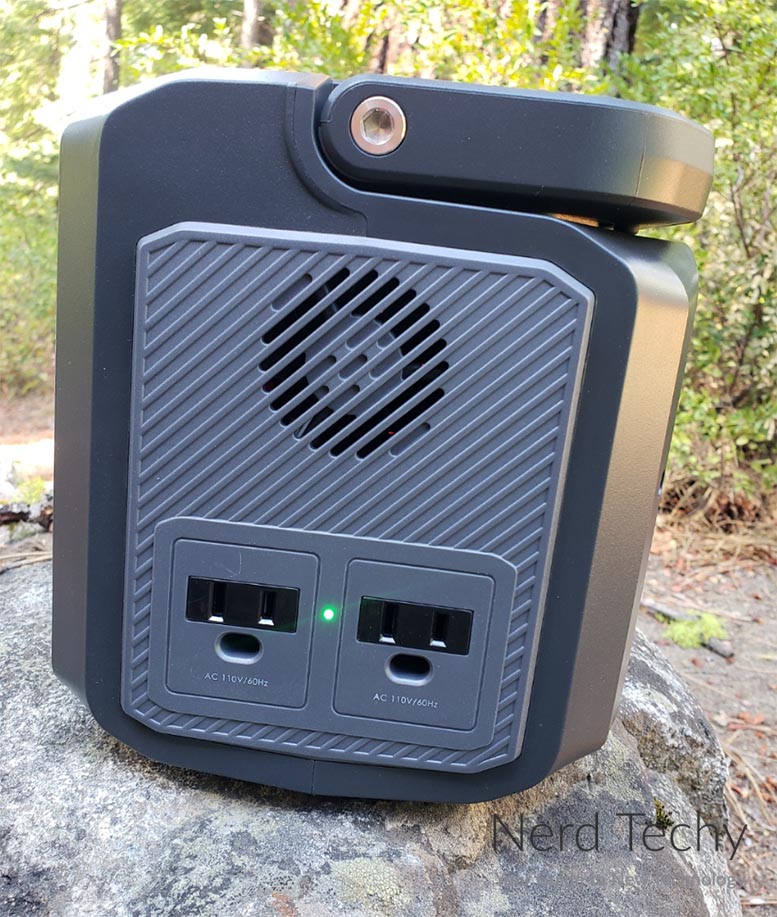 The package doesn’t just include the power station itself. You also get all the accessories you need in order to get started. Most importantly, these include an AC adapter and a DC socket adapter. As a result, you can charge anywhere there’s a wall outlet or a cigarette lighter. A solar adapter is also included for 100W-compatible panels.

Use code “Techy25” for 25% off on Aukey’s Official Website

The PowerZeus 500’s internal battery has a capacity of 518 watt-hours. If you’re like most people, that’s not a terribly helpful number. Here’s a more accurate breakdown of what it’s capable of. In terms of raw charging power, it can recharge an iPhone 12 just under 50 times. You’ll get five charges on a MacBook Pro 16”, and 90 full recharges on a standard GoPro. What does this equate to in terms of performance? If you’re using your phone for filming, you’ll get around 24 extra hours of record time. If you’re flying a drone, you’ll be able to run it for around 16 hours, depending on the model. Point being, you’ll get a lot of extra use out of your devices. 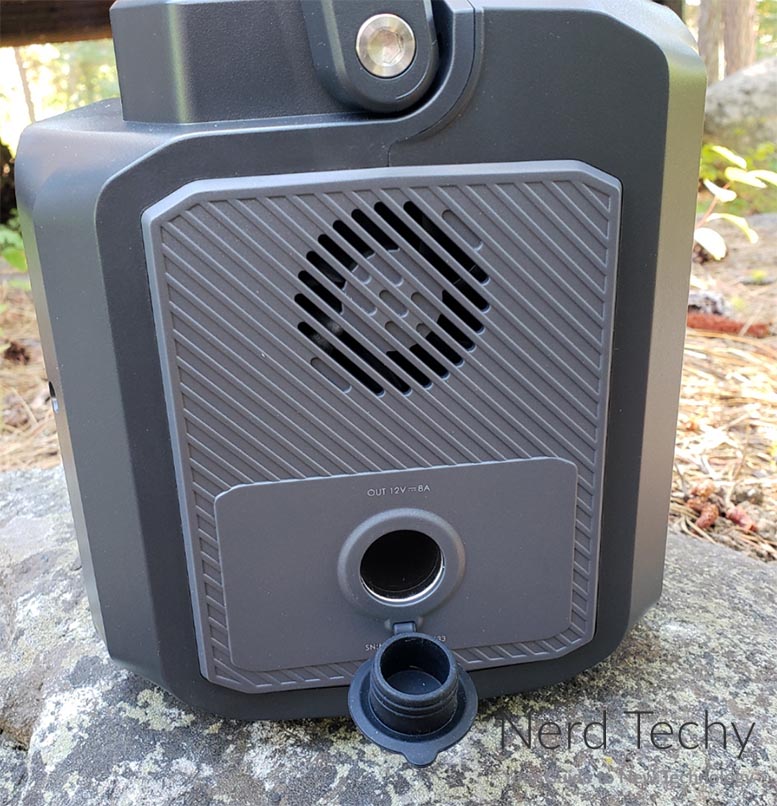 With this level of capacity, it’s best to think of the PowerZeus 500 as an adventure power station. It’s a bit more than you’re ever going to need just for charging your smartphone. On the other hand, it’s not big enough to be suitable as a whole house backup. Similarly, you might want to look elsewhere if you’re running medical equipment. But for a weekend off the grid with a few small devices, this power station is exactly what you need. It’s light enough to be portable, but still beefy enough to be useful. 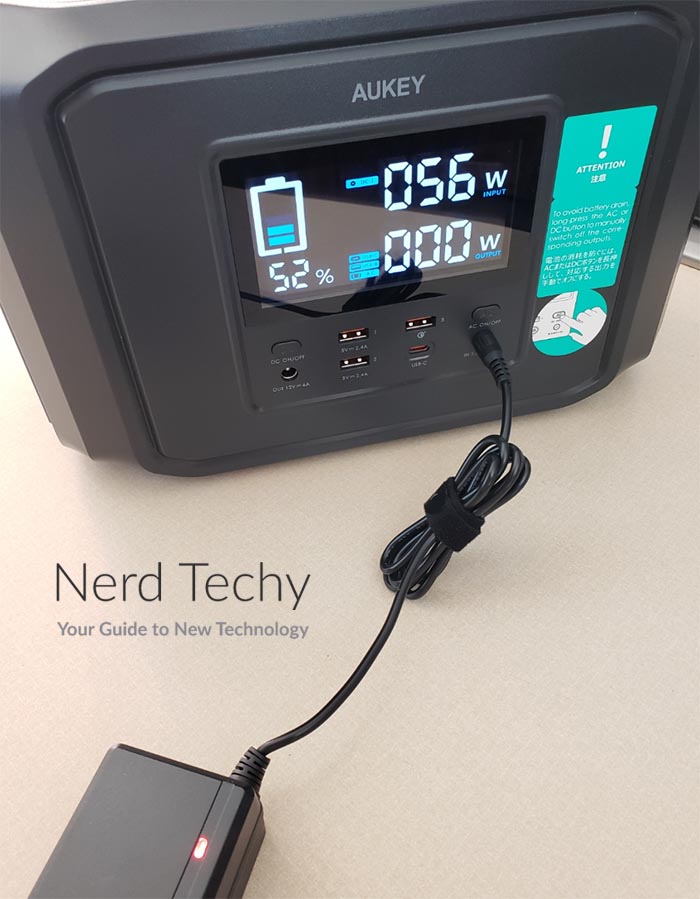 When it’s time to charge this power station, you’ll have your choice of a few different methods. To begin with, most people are going to charge using a simple wall socket. When you plug into an ordinary three-prong outlet, the battery will charge in nine hours. The same is true for generator power, assuming your generator is working properly. That shouldn’t come as much of a surprise; after all, it’s meant to replicate ordinary outlet power. 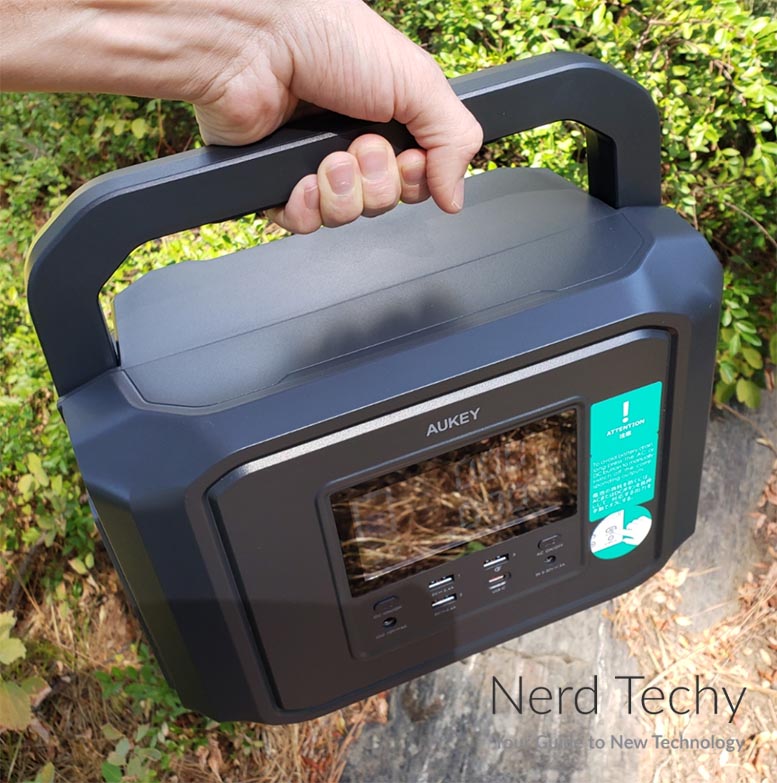 Counterintuitively, the fastest way to charge the battery is by using your car outlet. In an eight-amp car charging port, the battery will fully charge in only eight hours. That’s not bad at all, considering the capacity. Solar charging is more variable. Aukey advertises a charge time of 11 hours, but that assumes a solar panel that’s operating perfectly. If there’s anything sub-optimal, you won’t get the same results. For example, the solar panel needs to be in full sun, and it needs to be a sunny day. The temperature can also come into play. Even so, it’s nice to have the option if you don’t have access to a conventional power source. 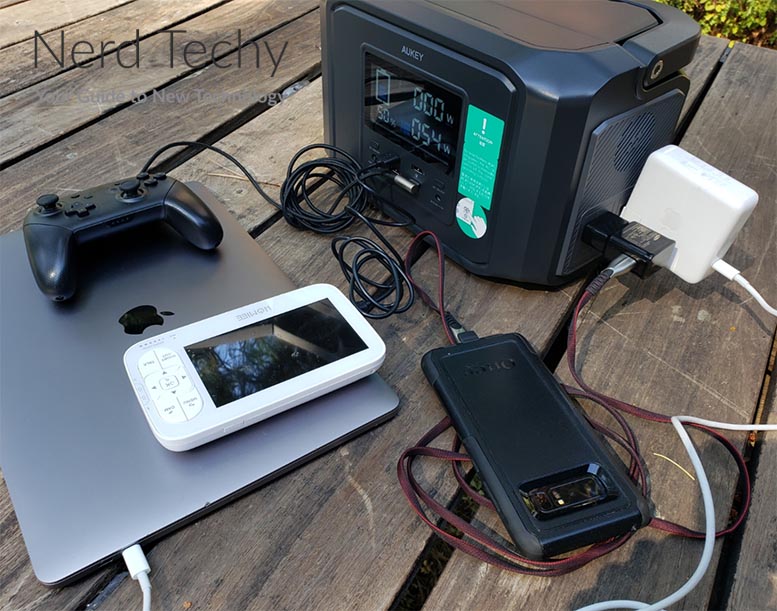 The two AC outlets on the right side of the housing have a maximum power delivery of 500 watts. This is about 1/3 the maximum wattage of an ordinary wall outlet. Moreover, that’s the maximum total cross both outlets. If you have two devices plugged in, they’ll be capped at 250 watts a piece. That said, the circuit does support up to 1,000 watts of peak voltage. This makes it safe for devices with a higher startup wattage. For example, you could run a very small mini fridge. You certainly won’t have trouble with any laptops, tablets, or similar electronics. They won’t come close to exceeding the power limit. The 12-volt DC port on the left is in-put only; it can’t actually be used to charge anything.

But what if you need a more powerful power station? In that case, consider the Bluetti AC200 Max and AC300. These are huge power banks, with potentially enough power to run your entire home. They’re modular systems, with add-on batteries, wireless charging support, and more. On the downside, they’re bulky and difficult to transport; you’d never want to take them camping. 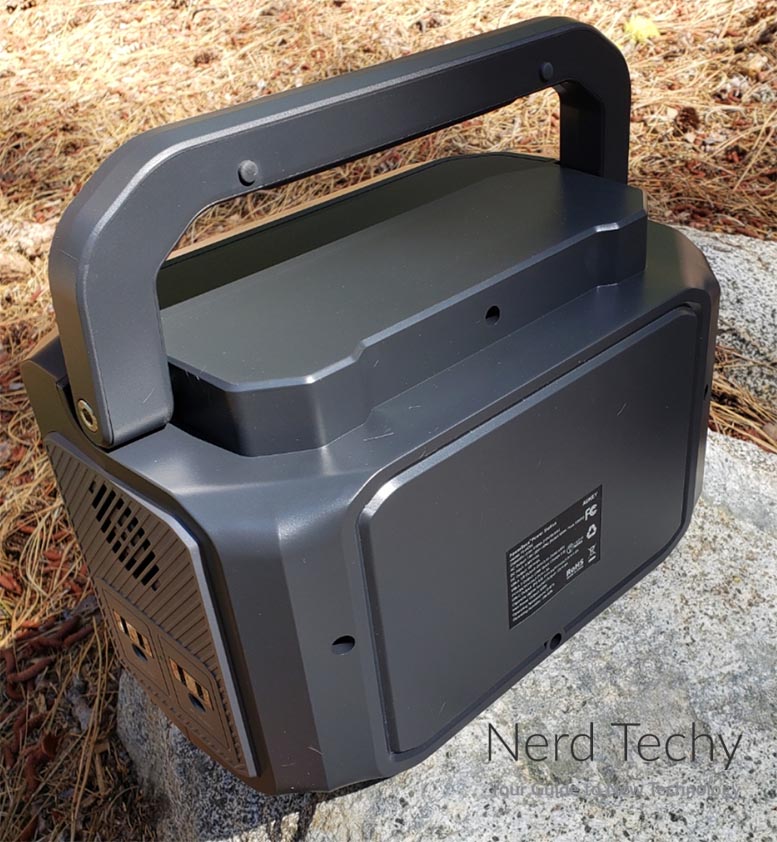 Once again, we return to the PowerZeus 500’s front panel. The two USB Type-A ports on the left provide a standard five volts at 2.4 amps. This works out to 12 watts, which is what you get from most USB ports. It’s fine for charging many devices, but it’s slower than most modern devices are capable of supporting. For faster speed, use the other USB Type-A port on the top right. This is a Quick Charge 3.0 port, and provides up to 18 watts. That’s enough to charge your iPhone at maximum speed.

The bottom right port is a USB Type-C PD port. PD, which is short for “power delivery,” is a technology that can deliver up to 100 watts. However, there are faster and slower versions of the standard. In this case, the “PD” port only provides 18 watts of power, barely faster than ordinary USB. This is fine for Samsung smartphones and smaller Type-C devices. But you won’t be able to charge a MacBook while it’s in use. You’ll have to turn off your laptop first, instead.

Use code “Techy25” for 25% off on Aukey’s Official Website

If you’re looking for a power station with faster PD power, check out the Rockpals 500W Portable Power Station. It provides up to 400 watts, sufficient for tablets and mid-sized tablets. It’s also no larger than the Aukey, so it’s similarly easy to transport. 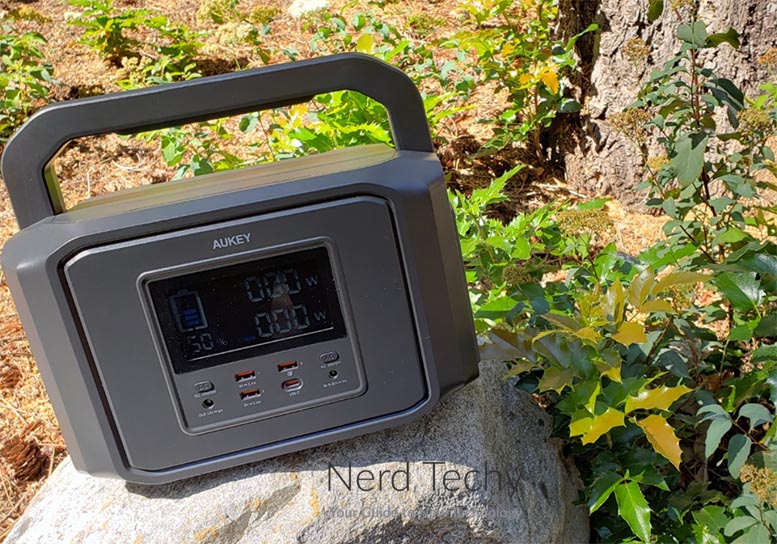 The Aukey PowerZeus 500 is a serviceable mid-sized power station that comes at a reasonable price. It’s powerful, it’s versatile, and it’s moderately portable. To be fair, it’s not perfect – we would have liked more PD power, and higher AC wattage. But for the most part, this is one of the better-designed power stations on today’s market. If you’re looking for a companion on your next camping trip, this is a solid choice.