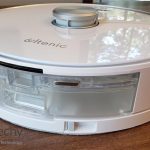 If you ask 100 people what technology they’re most excited about, they’ll give a variety of answers. Some people might talk about the latest iPhone, or their next gen gaming console. Some will talk about flashy hardware like electric cars and rockets to Mars. Some will be a bit more thoughtful, and talk about life-extension technology or a cure for cancer. But out of those 100 people, you probably won’t hear a single person talk about a robot vacuum. Let’s face it, there’s nothing exciting or tantalizing about a new and improved vacuum. It’s just another gadget, right?

Yes and no. A robot vacuum is indeed totally optional. There are other ways to clean your floor. But the benefit of a robot vacuum is that it’s automatic. It reduces your involvement in the cleaning process as much as possible. Think of an electric dishwasher, or your clothes washing machine. Yes, you can wash all your dishes by hand. You could also scrub your clothes on a washboard. But that takes a lot of time, which you could spend doing other things. You could be cooking a homemade dinner, or spending time with your family, or playing video games. A robot vacuum does the same thing. It takes over a boring, mundane job so you can do something more enjoyable.

Today, we’re going to be reviewing the Ultenic T10 Self-Emptying Robot Vacuum. This robot vacuum doesn’t just clean your floor by itself; it empties its own internal dust bin. As a result, you won’t have to empty the vacuum every time it gets full. You just have to empty the base station every couple of months. That’s a lot of time savings, which is the main thing you want to see from a robot vac. But what else is it capable of? How does the mapping system work, and how clean does it actually get your floor? To find out, we took a deep dive into all the T10’s features, functions, benefits, and drawbacks. Now, we’re going to tell you everything we’ve learned about this vacuum. Let’s get started! 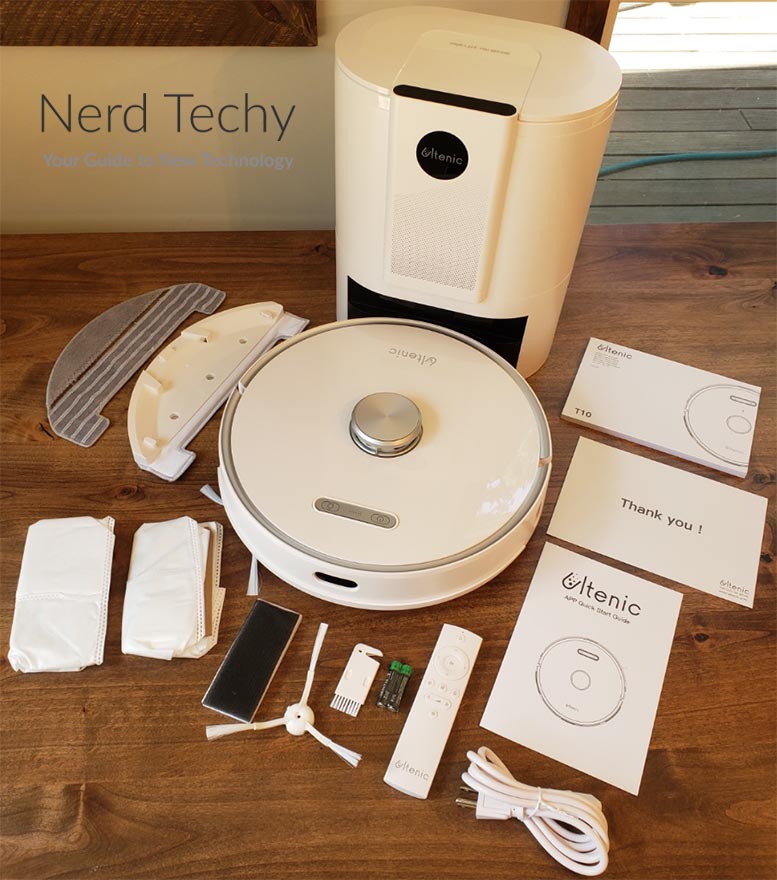 The Ultenic T10 is an ordinary, disc-shaped robot vacuum that measures 13.78 inches in diameter. This is a touch larger than most older vacuums, but for good reason. The larger the diameter, the more floor it can cover in a single pass. The height of the unit is 3.86 inches, which is also a bit larger than most. As a result, it won’t fit under very low furniture. But it will still fit under a bed frame just fine, and even under some sofas. A good portion of that height consists of an elevated laser sensor. This sensor is silver in color, and protrudes directly from the center of the housing. 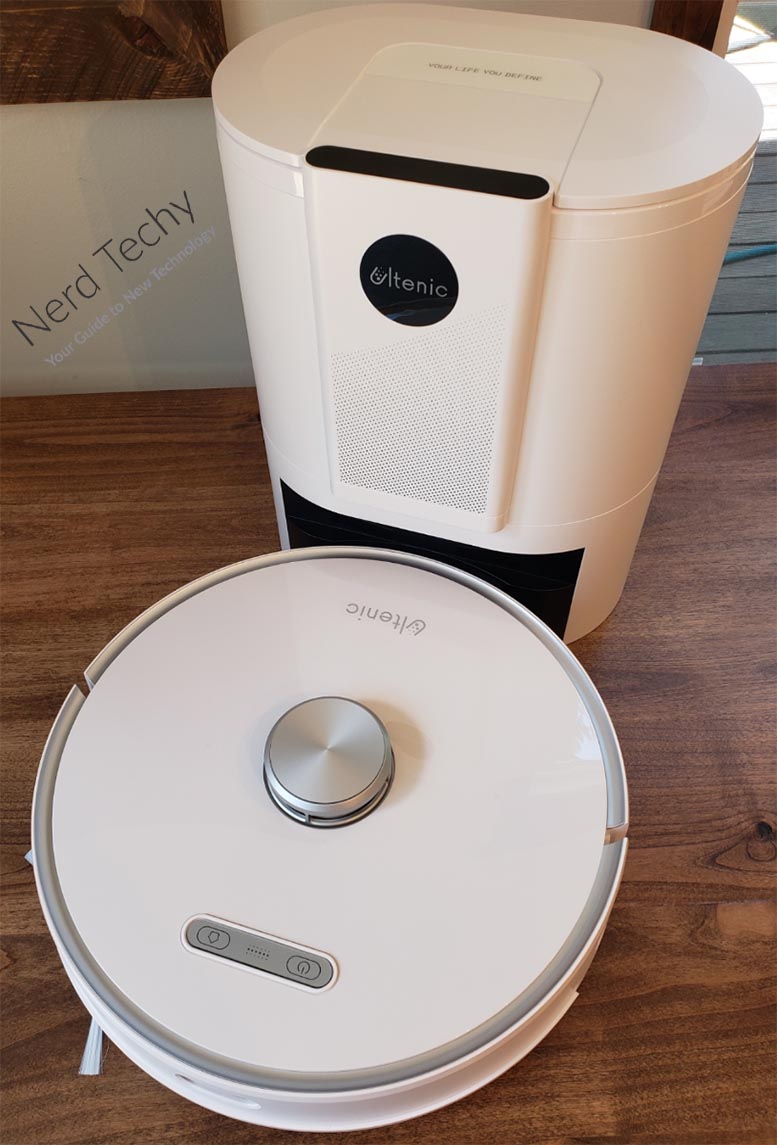 The rest of the housing is white polymer, although the top is covered with a sheet of tough tempered glass. As with many robot vacuums, the sides are fairly beefy, with a bumper-style design. Thanks to the navigation system, this isn’t strictly necessary. But it’s nice to know that if you accidentally kick the vacuum, you won’t destroy it. In the back, you’ll see a clear housing, which is the back of the dust hopper. This same hopper also functions as a mopping reservoir, so you can easily see the water level. The upside of this dual-purpose design is that the reservoir is fairly large, since it doesn’t have to share space. The downside is that you can’t mop and vacuum on the same cycle. But for most people, that’s a niche application to begin with. 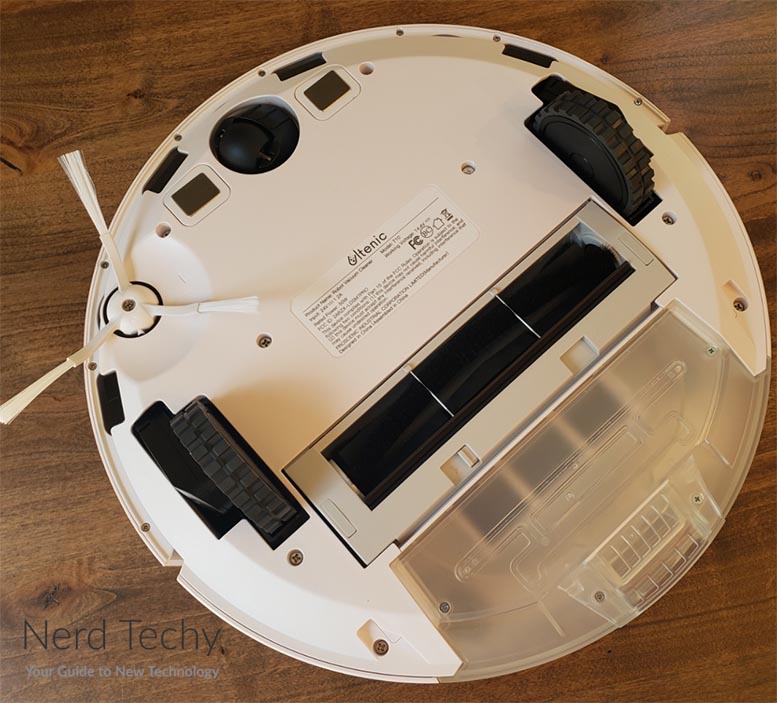 The top of the T10 vacuum has a couple of simple touch controls towards the front. These consist of a power button, which initiates cleaning, and a home button to return the vacuum to base. Between the two buttons, there’s a row of small LED lights, which indicate the current battery charge. Everything else is done through the app, which we’ll discuss more in a little bit. 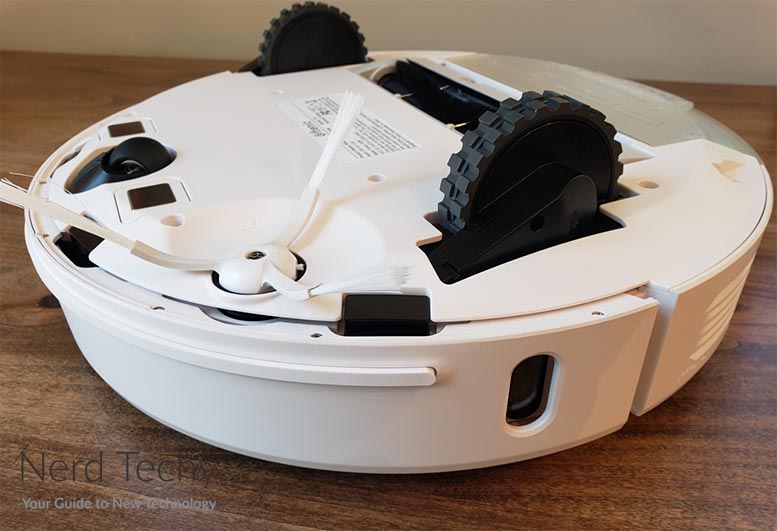 On the bottom of the vacuum, you’ll find the main brush, between a large set of wheels. These are the primary drive wheels, while a smaller, steering wheel is located towards the front. The main roller brush is tough and durable, and it’s relatively easy to access for the inevitable detangling. To the sides, a pair of horizontal brushes sweep out like helicopter blades. They pull dirt in from a wider area, guiding it directly into the main roller. These brushes won’t do as much on a carpet, but they’re a godsend on hardwoods and tiles. 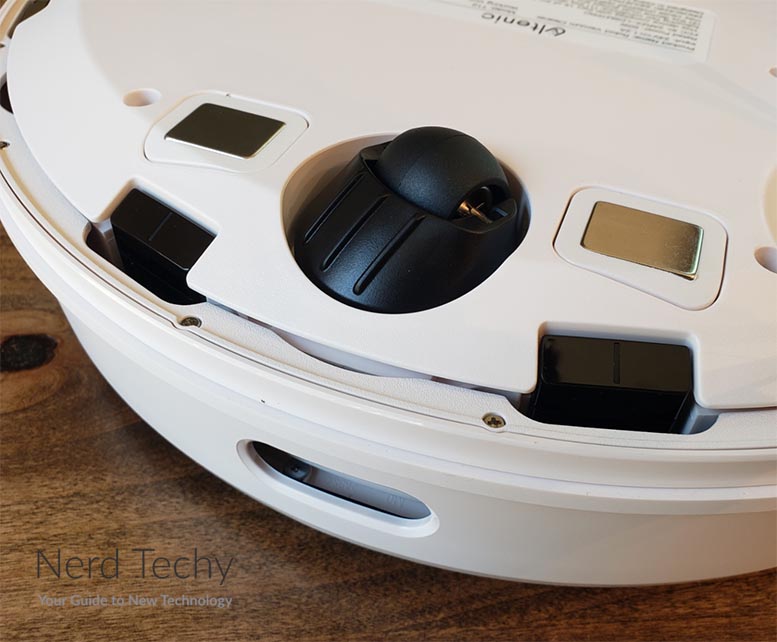 To the rear of the main brush, the mopping surface is located, just underneath the reservoir. To attach to the mopping surface, you get a pair of high-quality pads. These pads are machine-washable, and can theoretically be reused as many times as you like. 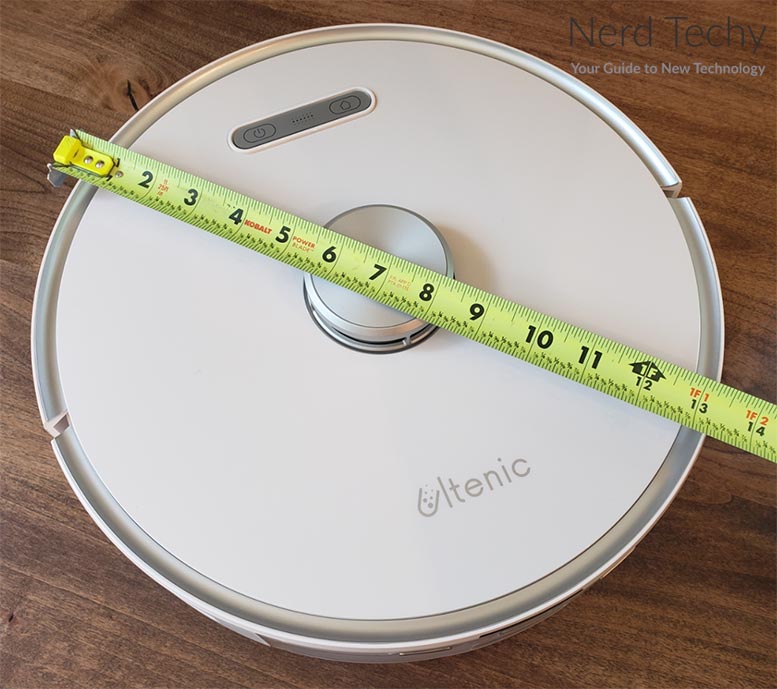 The vacuum itself charges in a larger base station, which looks like a small canister-shaped trash can. This is a bit bigger than most robot vac base stations, and for good reason. It doesn’t just charge your battery – it also empties the internal hopper. The bulk of the base station consists of a large upper canister, which houses the dust bag. The bag is disposable, and has a capacity of 4.3 liters. It’s a standard vacuum bag, with a cardboard flange at the mouth which you slide into place in the canister. As a result, it’s also reusable. You can save money by reusing the same bag many times, instead of buying a new one whenever it’s full. 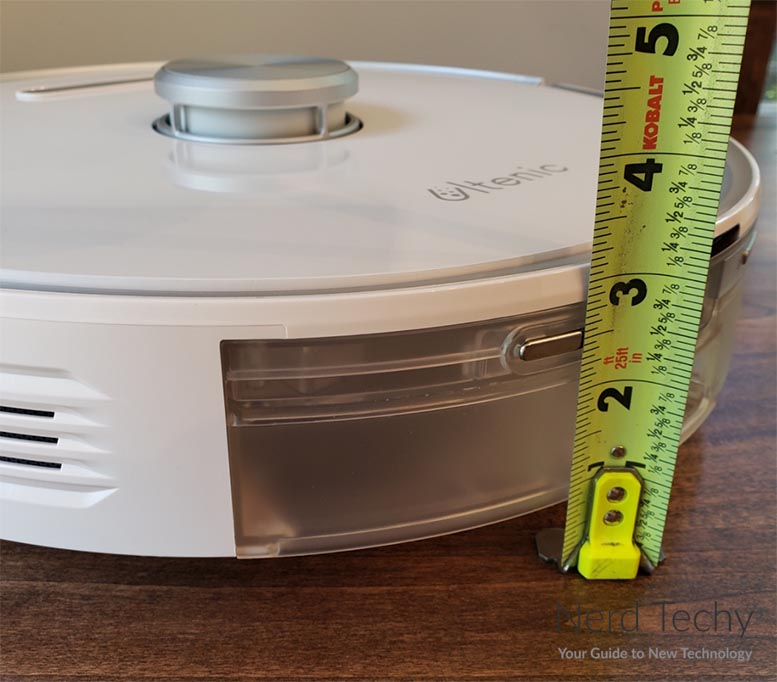 All of this – the vacuum, accessories, and stand – is covered by a 12-month manufacturer’s warranty. If anything goes wrong during that time period, you’ll get a free replacement or a refund. You also get access to 24/7 customer support, in case you run into any setup issues.

As you can already tell, the T10 has a lot to offer. But along the same lines, it’s also fairly pricey. If you’re looking to spend less for your robot vac, consider the Bagotte BG750 instead. It’s a more run-of-the-mill vacuum with few extra features. But it still cleans your home by itself, and it’s much more modestly priced. 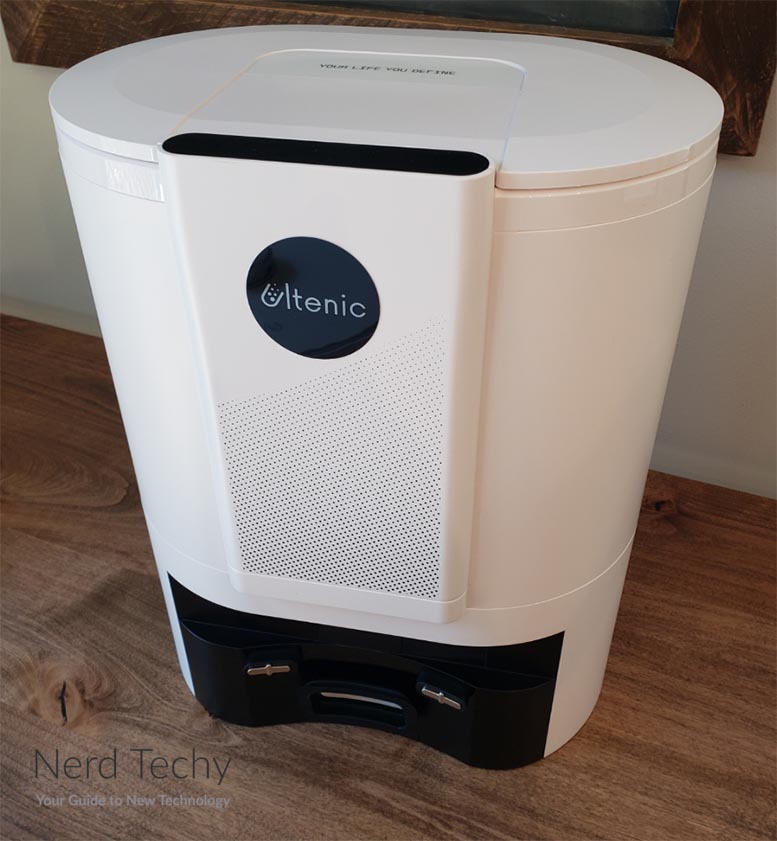 The Ultenic T10 vacuum provides up to 3,000 Pascals (Pa) of suction at maximum power. This compares favorably to the average robot vacuum, which provides around 2,000Pa of suction. That’s a great apples-to-apples comparison, but keep in mind that this is still a robot vacuum. The average upright vacuum provides a whopping 14,000Pa of power, and many offer even more. That said, 3,000Pa is plenty for everyday household cleaning. It will collect dust, dirt, and pet dander without any trouble. It will even clean up larger messes like rock salt with impressive ease. 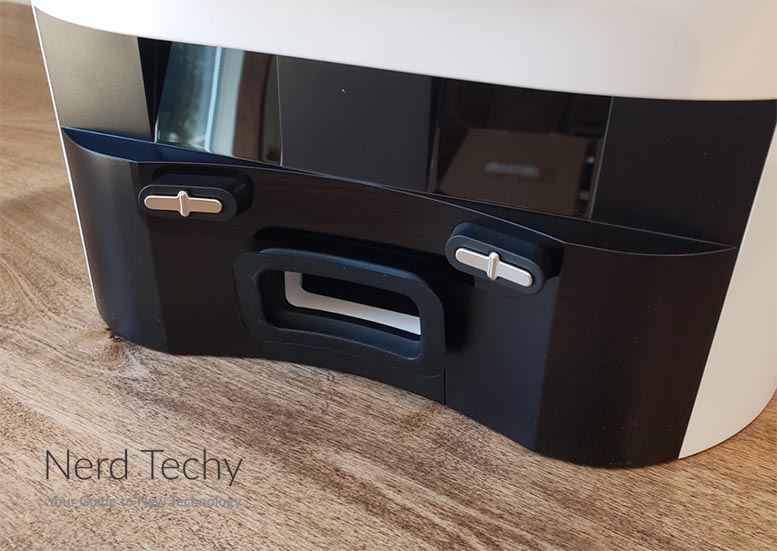 But even more impressive than the T10’s power is its run time. Depending on various factors, it can potentially run for 280 minutes between charges. That’s over 4 ½ hours, long enough to clean any reasonable floor plan. Unless you live in a literal palace, you’re just not going to run out of juice during a single cleaning. And if you somehow do run out, you don’t need to worry. The vacuum will automatically return to base when the battery gets low. Once it’s charged up, it will resume cleaning where it left off. 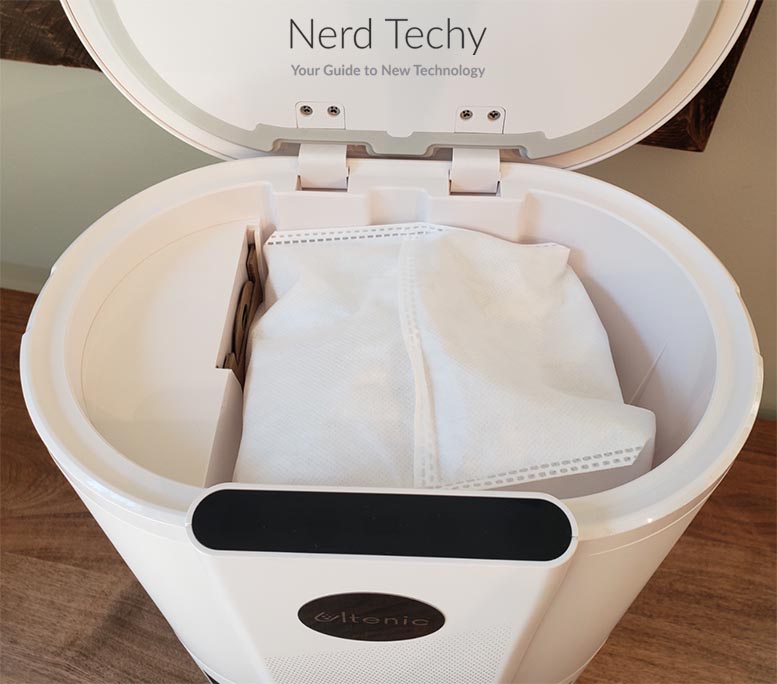 If you value power above all else, the Dreame Bot Z10 Pro is another interesting choice. It provides 4,000Pa of maximum suction, which is on the bleeding edge for robot vacuums. That said, this much power takes a toll on the battery. It will “only” run for 2 ½ hours per charge. 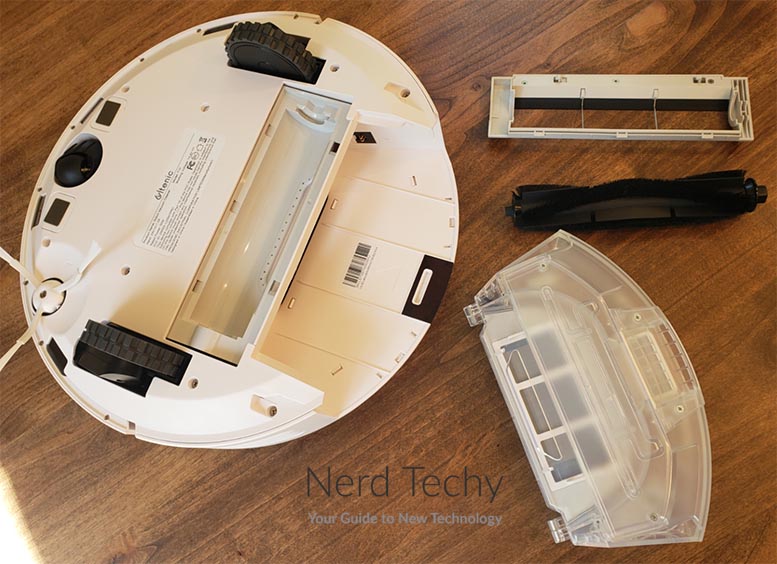 The T10’s mopping function is easier to use than most, thanks largely to the oversized, 580ml tank. This provides enough water to clean over 500 square feet of solid floor. Your mileage may vary somewhat depending on how dirty it is. But no matter how you cut it, you’re getting solid performance.

The first time you run the T10 vacuum, it will take longer than normal. This is because it needs to map out your home. For this function to work, you’ll first need to download and install the smartphone app. The app is free, and it’s easy to set up by following the in-app instructions. After that, your vacuum can map your floor, and the floor plan will be saved in the phone. You can even save multiple floor plans for multi-story homes, and switch between them as needed. 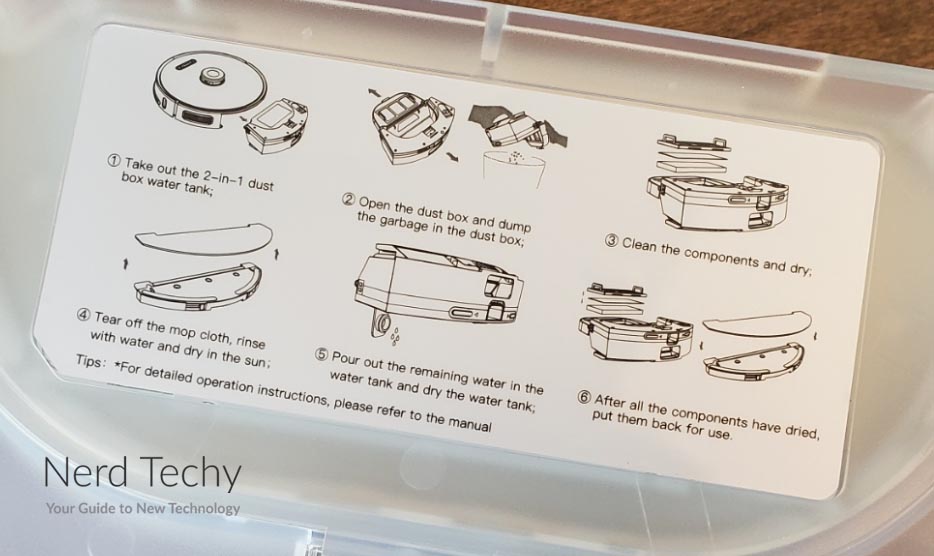 As with many robot vacuums, you can use the app to perform many functions. Notably, you can tag particular rooms, and set the vacuum to run on a schedule. You can also mark specific areas as no-go zones for the vacuum to avoid. You can even schedule different rooms at different times, to suit the vacuum to your family’s schedule. If that’s not enough, the app can also integrate with Alexa and Google Assistant, so you can use voice commands. 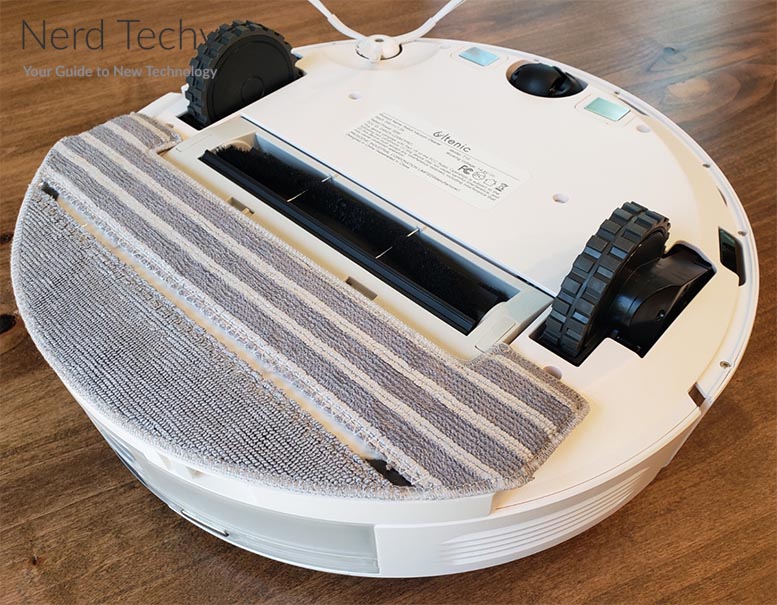 Unfortunately, the app left us disappointed. The advertising material shows a slick UI with an easy-to-use interface. Reality was a bit less impressive. The graphical representation of your house is tough to use, which makes no-go zones awkward to create. You’re better off blocking individual rooms, which you can do from a list. The scheduling can also be janky, and doesn’t always work like you’d expect. It almost feels like the software wasn’t thoroughly tested.

If an easy-to-use is what you crave most, take a look at the ROIDMI Eve Plus. The app is slick and intuitive, with a low learning curve that makes it easy to master. On the downside, its maximum suction is 2,700Pa, 10 percent less than the T10’s. 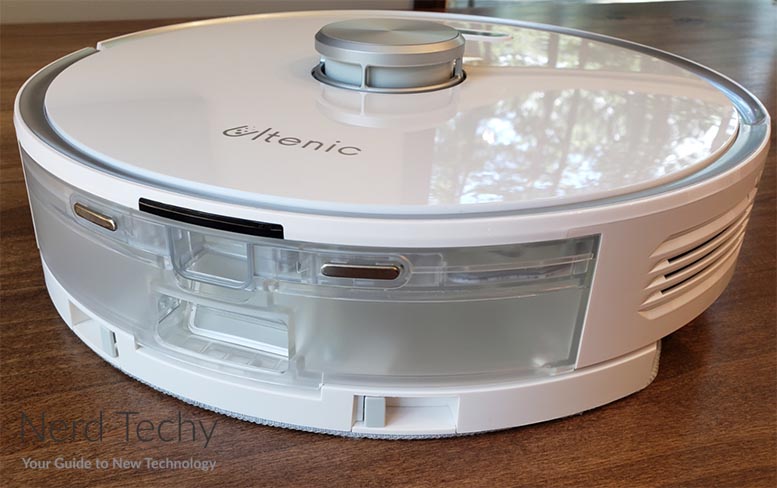 The Ultenic T10 Self-Emptying Robot Vacuum has a lot to bring to the table. It’s self-emptying, it has a ton of suction power, and it runs for eons. It also allows for an impressive amount of control. But while this is a very good robot vac, it could have been truly excellent if the UI were better. Considering the price, we’re hoping to see a software upgrade at some point in the future.

Helpful Guide to the Best Smart Outdoor Faucet …
May 9, 2021