If you’re trying to AC-powered electronics from solar power or an RV, you need an inverter. An inverter converts the DC power from a solar panel or battery into AC power for your devices. It’s an essential link in any DC-powered electrical system.

But not all power inverters are created equal. They have different numbers of power ports, and different safety features. They have different displays and controls. Most importantly, some have higher wattages, others deliver less power. A 1,500-watt can reach the same maximum power as a standard home outlet. So it’s a good place to start if you’re trying to replicate a wall outlet’s performance.

Today, we’re going to review four of the best 1,500W pure sine wave inverters that we could find. If you don’t want to read all the details, here’s the quick and dirty version:

Of course, there’s a lot more that goes into any pure sine wave inverter. To find out how well these perform, we’ll have to dig deeper into their features and functions. After we’ve given them all a thorough once-over, we’ll know enough to render our verdict. Let’s begin! 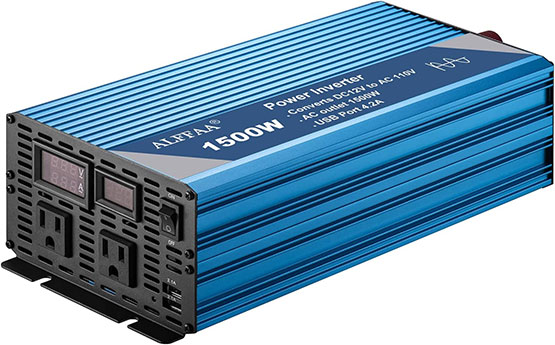 The ALFFAA 1500W Pure Sine Wave Inverter is constructed from a rugged aluminum alloy, with a shiny blue finish. It measures 11 inches long, 6 inches wide, and 3 inches thick, and tips the scales at 6.3 pounds. The end caps are made from black aluminum, with flanges at the bottom for mounting. 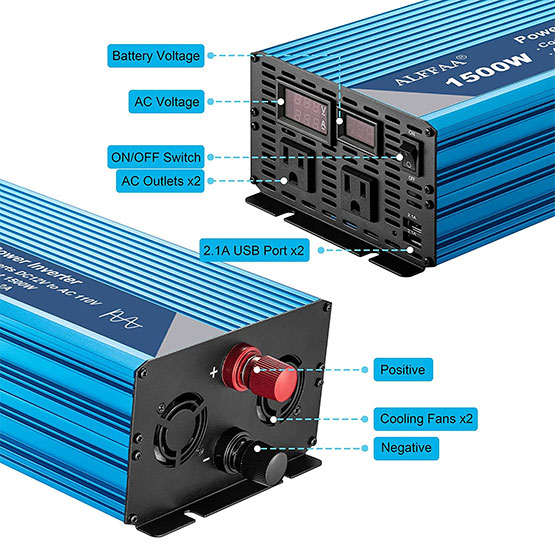 At one end, you’ll find a pair of grounded AC outlets. These are located near the bottom, with a pair of USB Type-A ports off to the right side. Above the USB ports is a simple black switch that turns the unit on and off. Above the AC outlets is a pair of LED displays. The one on the left shows the AC voltage and amperage being drawn. The one on the right displays the current input voltage.

On the back end of the housing is a pair of red and black terminals. They have screw-down lugs to attach your battery cables. These are stacked one over the other in the center. To the sides, you’ll find a pair of cooling fans which keep the system from overheating. 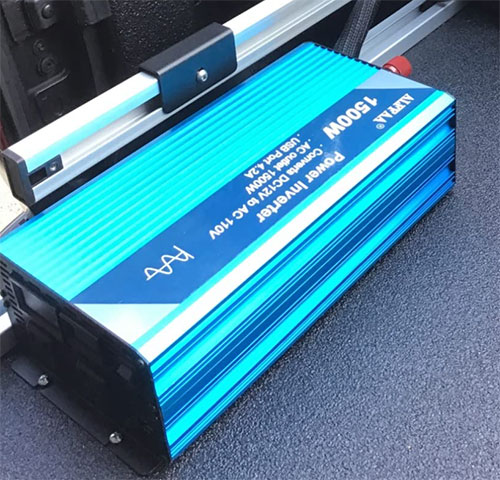 The ALFFAA inverter is capable of delivering 1,500 watts of continuous power. That’s equivalent to the current you can draw from a single wall outlet. Keep in mind that this amount is split between both outlets. If you’re running a 1,500-watt space heater on one outlet, you won’t be able to use the other. That said, you can get 1,700 watts of surge power. If you want to run a compressor-driven device, you’ll be able to.

The system has a number of built-in protections. You’ll be safe from under-voltage, over-voltage, and power overloads. There’s a built-in temperature sensor that shuts off power if it gets too hot. And a GFCI interrupter cuts turns off the system in the event of a short.
ALFFAA backs this inverter with an impressive five-year warranty. That’s longer than you’ll find just about anywhere on the market. 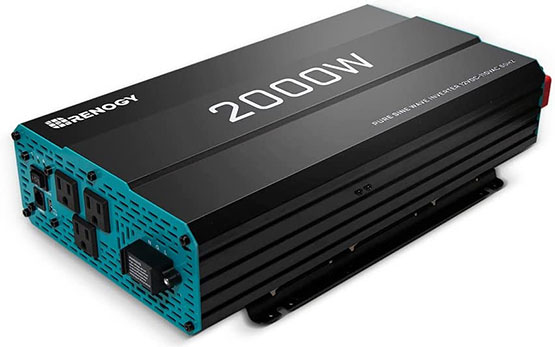 Renogy is an established manufacturer of electrical equipment. In fact, we recently reviewed their smaller, 1,000-watt pure sine wave inverter. It performed very well, so it was only natural to take a look at the next size up.

When we chose the Renogy 2000W Pure Sine Wave Inverter for this list, we were cheating a little bit. As the name implies, this is a 2,000-watt inverter, so it’s more powerful than a 1,500-watt machine. It also has an impressive surge rating, at 4,000 watts. That’s enough to power even a full-sized refrigerator if you wanted to. 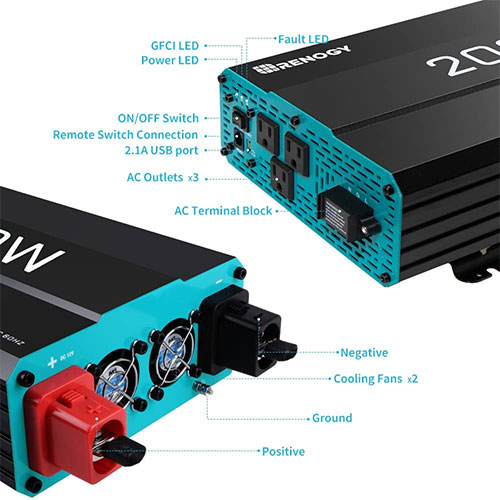 The housing is crafted entirely from black aluminum, with flanges on the sides for easy screw-mounting. The end caps are teal, with venting to allow for easy air flow. It’s a bit large, at 17.8 inches long, 8.6 inches wide, and 4 inches thick. But at 11.7 pounds, it’s not excessively heavy.

At the front end of the housing, you’ll see a set of three AC outlets. These are grounded, and stacked in an inverse pyramid towards the center. To the bottom left is a phone jack for the remote control, alongside a single USB Type-A port. Above the controller jack is an on/off switch, with a row of three indicator lights above it. One is a simple power indicator, while the middle indicates that the GFCI has triggered. The one on the left indicates a general fault.

The back side of the housing has a pair of tab-style terminals with corresponding red and black plastic guards. These guards will keep any live connections shielded and difficult to touch by accident. Between the terminals, a pair of fans are stacked one over the other, to keep the system cool. 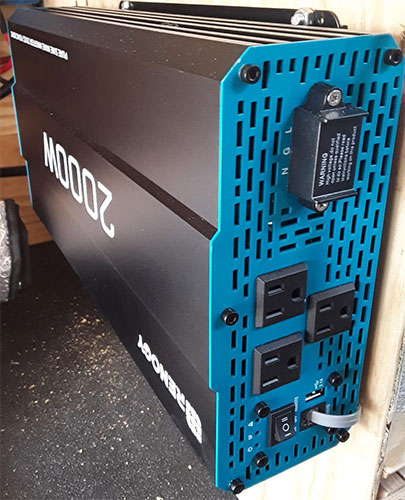 The remote control is a simple black block with an on/off button and a set of indicator lights. It has a 19.8-foot cord, which should be long enough to reach wherever you need it. The kit also includes a pair of 3-foot connection cables for your battery or solar system.

The battery management system provides protection from under-voltage, over-voltage, and current overload. It also protects you from short-circuits and overheating. You’ll get further protection from the 12-month manufacturer’s warranty. 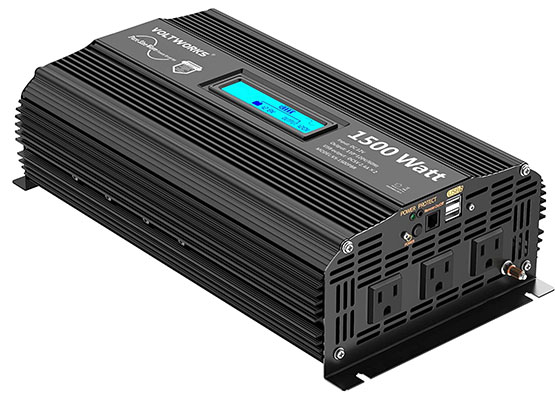 VOLTWORKS is another manufacturer we’ve looked at in the past. A few months back, we took a look at their powerful 3,000W pure sine wave inverter. It’s one of the best that money can buy in its price class. So we decided to go back to the well and look at their smaller inverter.

The VOLTWORKS 1500W Pure Sine Wave Inverter is constructed entirely from black aluminum. It’s fairly beefy, at 14.5 inches long, 8 inches wide, and 3.9 inches thick. The flanges on the short ends have small cutouts for screwing the unit down. 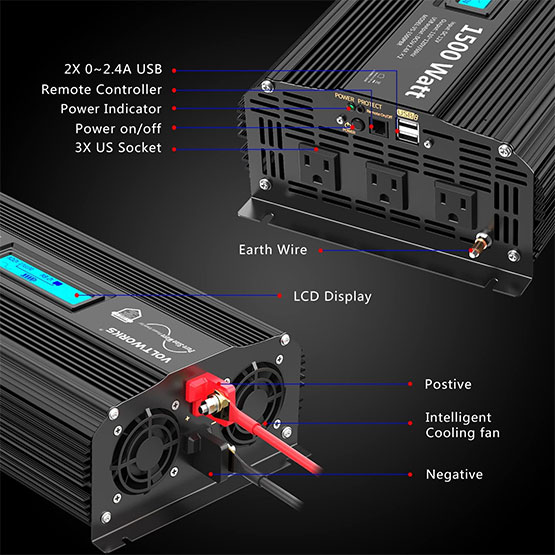 The front of the housing has a row of three grounded AC outlets across the bottom. At the top center is a phone jack, where the wired remote connects. To the side is a pair of USB Type-A ports, with a power button to the left of the jack. The button has a pair of indicators above it. The first lets you know it’s active, and the second lights up if there are any system faults. The terminals on the back are a pair of simple threaded rods with nuts and red and black covers. The fans are off to the sides, and do an admirable job of keeping everything cool.

On top of the housing is a rectangular LCD display. It shows your current input and output voltage, and also has a visual battery meter. That way you’ll know in advance if the battery is starting to run dead. You’ll find another battery meter on the remote, which sports a 15-foot cord. The remote has a pair of holes in it so you can screw mount it to a wall, and also has a set of fault alerts. 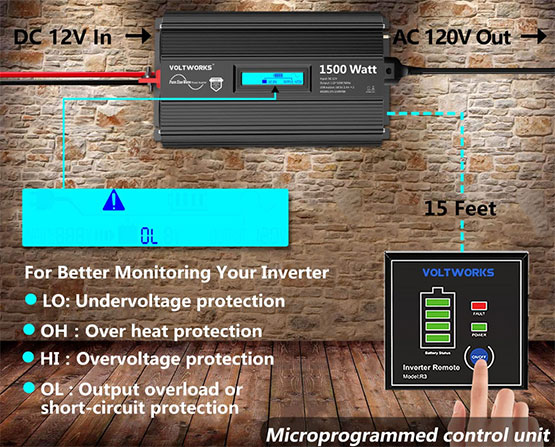 As you might have guessed, this inverter supplies 1,500 watts of power. In a pinch, it can put out up to 1,800 watts of surge power. The system includes short-circuit protection, over- and under-voltage protection, and temperature protection.

The kit includes a pair of 2-foot red and black cables for connecting to the terminals. And everything is backed by a 36-month manufacturer’s warranty. 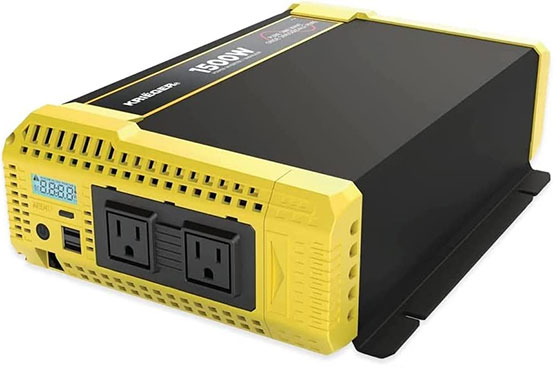 The Krieger 1500 Watt Pure Sine Wave Inverter has a black aluminum housing with mounting flanges on the sides. The end caps are bright yellow plastic, with plenty of venting. In total, the unit measures 21.8 inches long, 9.8 inches wide, and 4.1 inches thick.

The outlets are located on the front side of the housing. There are two grounded AC outlets in the center, with a pair of USB Type-A ports to the left. Near the USB ports is a port for the remote, along with the power button. There’s also a small LED display that shows the input and output voltage as well as any applicable faults. On the back of the housing is a pair of red and black tabs on the back with lugs and nuts as the terminals. The cooling fans are located to both sides. 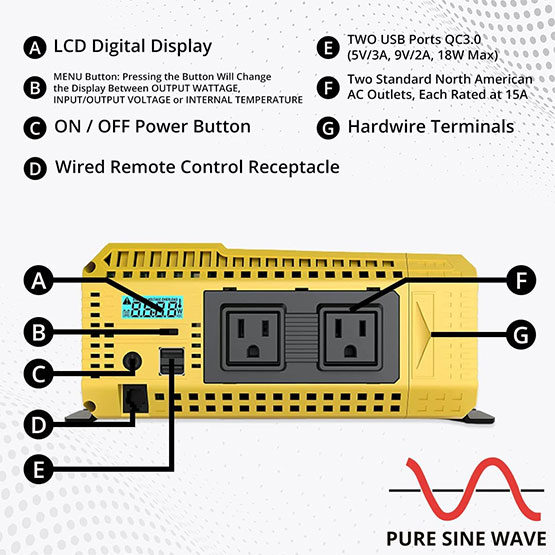 This 1,500-watt inverter can provide up to 3,000 watts of surge power in a pinch. That’s enough to handle massive loads from powerful compressors kicking in. And if anything goes wrong, you’re protected by low-voltage, overcurrent, and overheating protection.

The remote has its own power button, and a display that shows the same information as the main unit’s. It also have a removable, replaceable cord. If you have to swap it out, you can. A pair of three-foot lead cables round out the kit.

What is Pure Sine Wave Power?

We’ve already outlined why it’s so important to own an inverter. But why a pure sine wave inverter? Why not save money by using a cheaper regular inverter?

The reason comes down to the way inverters work. During the inversion process, the waveform of the electricity becomes distorted. Instead of a smooth sine wave, it’s a jagged, blocky wave. This is called “modified sine wave” power, and it’s not always desirable. It can run basic equipment like a space heater. But plug in something sensitive like a CPAP machine or a microwave, and it can damage the electronics.

A pure sine wave inverter runs the electricity through a special circuitry that smooths out the wave. It creates a smooth, balanced sine wave like the power that comes out of your wall outlet.

So, which of these pure sine wave power inverters is the best of the bunch? A lot depends on what you need. Here’s a quick recap of each one.

We began by looking at the ALFFAA 1500W Pure Sine Wave Inverter. This is a capable little inverter with a pair of power ports and a well-designed on-board display. There’s no remote control, which could be a problem for some applications. But the power is reliable, and the extensive safety features provide a lot of security.

After that, we examined the Renogy 2000W Pure Sine Wave Inverter. This is the most powerful inverter, with 2,000 watts of constant power and 4,000 watts of surge power. It also has a long remote cord that reaches as far as you could ask for.

Next, we reviewed the VOLTWORKS 1500W Pure Sine Wave Inverter. This system has the most comprehensive remote, since it features a built-in battery meter. And with three AC outlets, you can supply power to plenty of devices.

We finished up by evaluating the Krieger 1500 Watt Pure Sine Wave Inverter. This inverter’s 3,000-watt surge rating makes it suitable for running compressor-driven devices with large surge demands. We also liked the replaceable remote cable, which you can swap out if it gets damaged.