Home solar arrays have made a lot of advancements in recent years. No longer do you have to be rich, or take out a second mortgage, in order to install one. Just about anyone can install a solar power system, and many people are taking advantage. Most people know that a solar system requires battery backups. This is necessary to supply a steady current. Otherwise, you’d only get power during the day, and the voltage would fluctuate even then. Deep cycle batteries store extra power during the day, and release it at night for a consistent supply.

But batteries supply electricity in direct current (DC). To safely power most devices, this energy needs to be converted to alternating current (AC) power. An inverter does just that, so you can plug into an ordinary socket. Inverters aren’t just for solar systems, either. They can be installed in cars, RVs, boats, and any other 12-volt power system. Be careful, though. Deep cycle marine and solar batteries are not designed to be drained below 50%.

We’re about to review three of the best 1000w pure sine wave inverters that money can buy. First up is the Victron Energy Phoenix. This is a smart, efficient inverter that can be monitored and controlled via computer. Next, we’ll be looking at the Renogy Inverter. This is a powerful, no-nonsense inverter with dual GFCI outlets. Last, we’ll examine the Go Power! GP-ISW1000-12. This is an industrial-grade inverter that’s designed for constant use. Which one is the best of the bunch? Let’s dig deeper, and see what we discover!

What is “Pure Sine Wave”?

We’ve explained why you need an inverter. But why would you want a pure sine wave inverter? The answer has to do with the difference between DC and AC power. When a battery releases electricity, it’s a direct-current flow. This might sound confusing, but it’s straightforward and very literal. Electrons are flowing from the positive terminal, through the circuit, and into the negative terminal. Power from the electrical company works a bit differently. In order to work more efficiently at scale, they produce electricity using an alternating current. Again, this is very literal. Electrons flow first in one direction, then in another. This alternation happens very quickly. In the US, residential AC power is delivered at 60Hz, which means the flow alternates 60 times per second.

The problem for inverters is that ordinary AC power oscillates very smoothly. It doesn’t just switch abruptly from one direction to the other. If you were to plot a graph of the electron flow, you’d see a smooth, even wave moving up and down. Standard inverters, however, do switch abruptly from direction to direction. If you were to plot a similar graph for inverter power, you’d see a series of sharp, rectangular blocks. This type of “wave” is called a “modified” sine wave, and it’s not good for many electronics. For instance, when plugged into a modified sine wave inverter, most microwaves will cook too fast or too slow. Modern MacBooks will not charge properly, and can become damaged. Even sturdier motors like fridge compressors can wear down faster over time.

A pure sine wave inverter, like a pure sine wave uninterruptible power supply, fixes this problem. Several internal components smooth out the jagged edges, creating a “pure” wave like the one from the power company. As a result, it’s safe to use with more sensitive electronics. 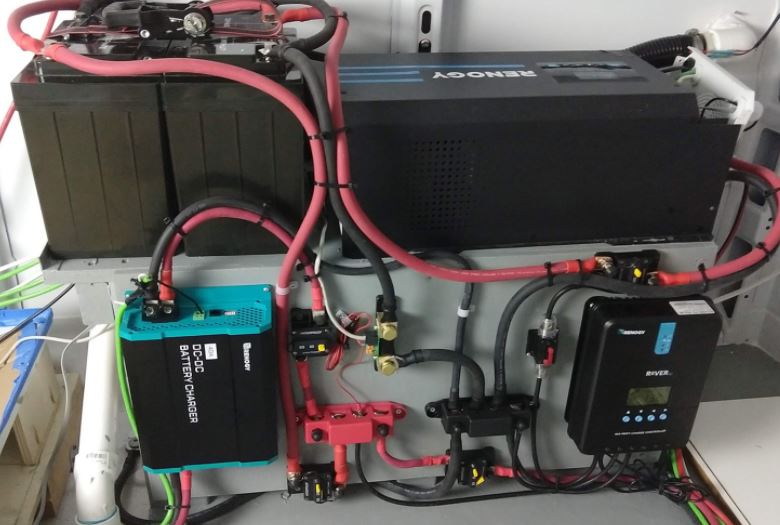 As you might have guessed, the pure sine wave inverters we’re reviewing today will supply 1,000 watts of power. Is this going to be enough for your needs? Let’s start by establishing a baseline. A standard US residential circuit supplies 120 volts at 15 amps. This works out to a maximum wattage of 1,800 watts, across the entire circuit. So a 1,000-watt inverter supplies a little over half the wattage of a residential circuit. Keep in mind, though, that most circuits power a handful of lights and outlets. These inverters, on the other hand, only have two plugs each. So you can plug just about anything into them.

This doesn’t mean there are no limitations. For example, you can’t run a 1,500-watt electric space heater on a 1,000-watt circuit. You also don’t want to connect a power strip and start plugging in dozens of devices. But for everyday use, you should be just fine. Even a fairly large TV, for instance, won’t draw much more than 100 watts. A standard USB smartphone charger draws 15 watts. A desktop computer can draw from 300 up to around 500 watts, depending on system performance.

There are a couple of additional wrinkles you should be aware of. Microwave wattage, for example, is not the same as the cooking power. So a 700-watt microwave doesn’t necessarily draw 700 watts. You have to check the owner’s manual to see the actual power draw. Finally, electric motors like pumps and compressors use a lot of wattage to start up. This “peak” wattage can cause your draw to spike over 1,000 watts, even if you’re otherwise well under it. Always look for peak wattage when you’re figuring out what you can plug in. Otherwise, your fridge compressor could trip the breaker when it kicks in.

Before you buy, it’s also important to consider what type of electrical demands you’re going to place on your inverter. For example, are you going to use it constantly? Daily? Weekly? Whenever the power goes out? The more an inverter is going to be used, the more rugged it needs to be. Look for more powerful fans that move a lot of air and keep the unit cool. That’s going to make a big difference in terms of longevity, particularly for heavy-duty use.

In addition to powerful cooling, it’s also wise to look for a suite of safety features. Over-voltage, under-voltage, and short circuit protection are all good to have. This means that voltage will always fall within a safe range, and you won’t short your electronics. GFCI outlets are also good to have, since they’re better-equipped to handle power surges.

All of these features might increase the cost when you first buy your inverter. But over time, a poorly-designed inverter can cost you way more. It can shorten your battery life, wear out your devices faster, and even cause permanent damage. That’s not to mention the risk of electric shock from cheap equipment. In light of all these issues, it just makes sense to spend a few extra dollars for a safe, durable inverter. 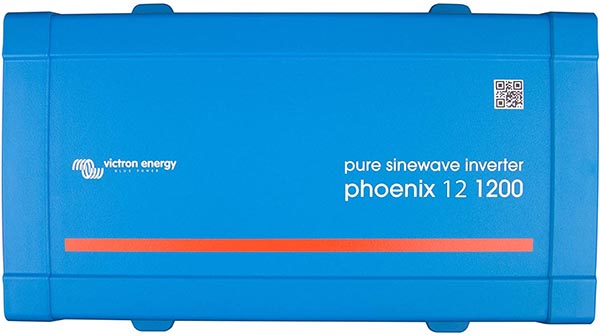 The Victron Energy Phoenix 1200VA 12-Volt Pure Sine Wave Inverter is the most powerful on our list. The 1,200VA stands for volt-amps, which is a fancy way of describing watts in an AC system. In other words, this is actually a 1,200-watt inverter. Not only that, but it’s capable of delivering a whopping 2,200 watts of peak power. This makes it suitable for running even high-peak load devices, such as refrigerators. For all that power, it’s also very efficient. When there’s no load, the Phoenix goes into standby mode, and draws only one watt until something is plugged in. 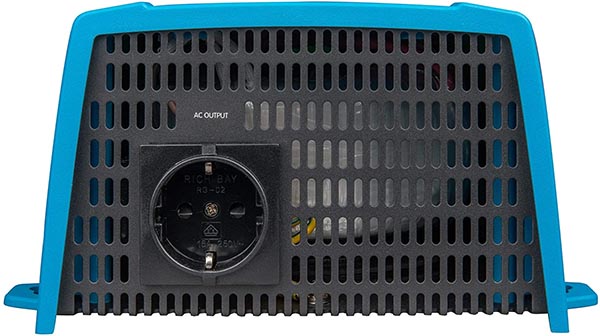 The housing is fairly bulky, measuring 17.3 inches long, 11.4 inches wide, and 7.5 inches thick. The width includes a set of holed flanges, which are designed for easy mounting. Not only that, but the unit is fairly heavy, tipping the scales at 19.6 pounds. For some reason, Victron’s marketing material only shows pictures of the 250volt version, but don’t worry. The Phoenix sports a pair of standard US three-prong outlets. It’s also covered by an impressive five-year warranty, among the best in the business.

The Phoenix has a VE.Direct communication port. This allows you to customize settings and monitor your system with a tablet, PC, or smartphone. The software is available for free from Victron, but you’ll have to provide your own patch cables. 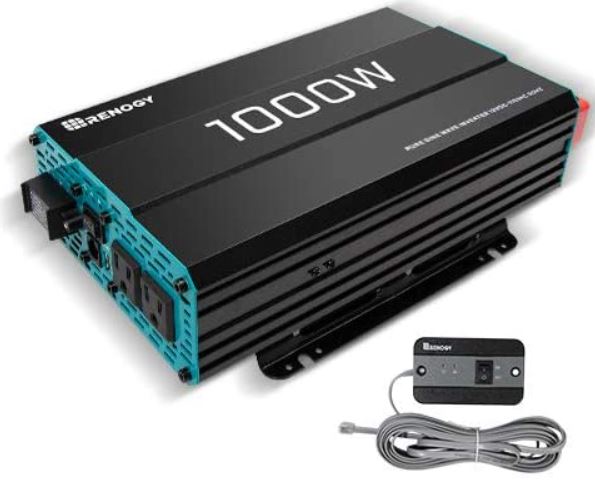 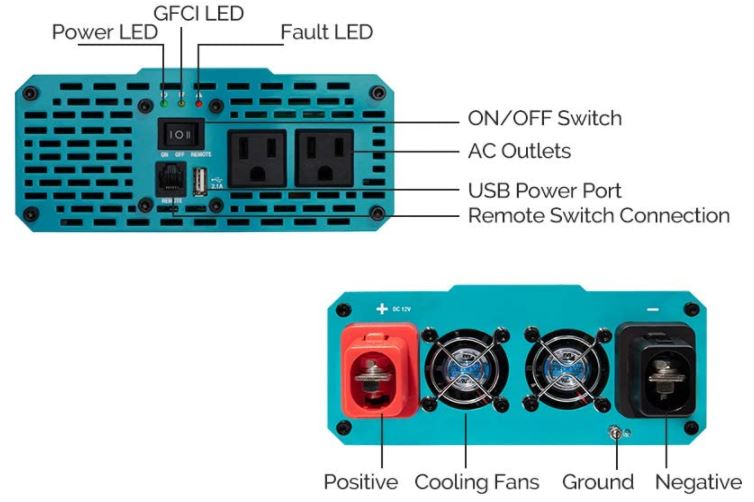 It’s also significantly lighter, weighing in at only four pounds. There are a couple of reasons for this. First, it’s a true 1,000-watt inverter, so it doesn’t need to be as large. Second, it doesn’t have any computer controls or other complex interface. That said, it does come with a simple wired remote with a 19-foot cord. This is easy to mount on a dashboard in a car or RV. 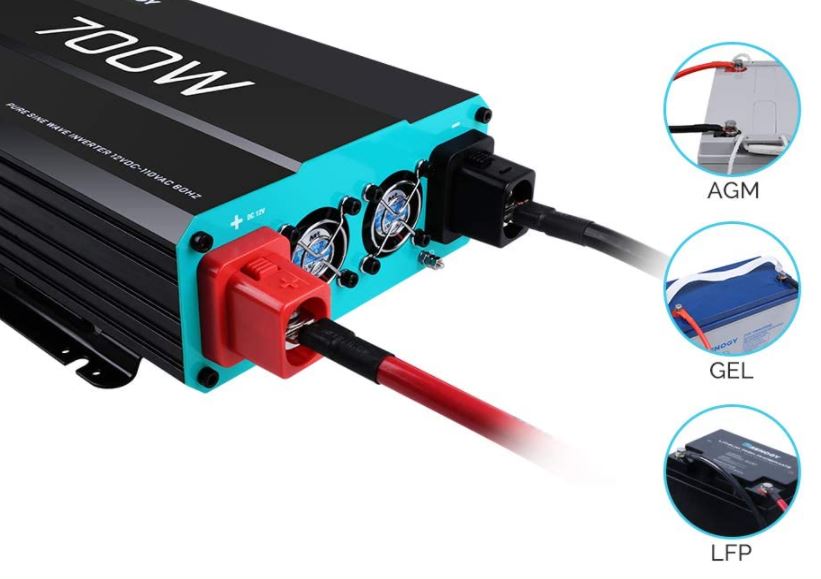 In addition to a pair of three-prong outlets, the 1000W 12V Pure Sine Wave Inverter also has a USB port. This is useful for automotive use, as a phone or GPS power supply. All outlets have over voltage, under voltage, over temperature, and short circuit protection. The AC outlets also have GFCI protection for maximum safety. 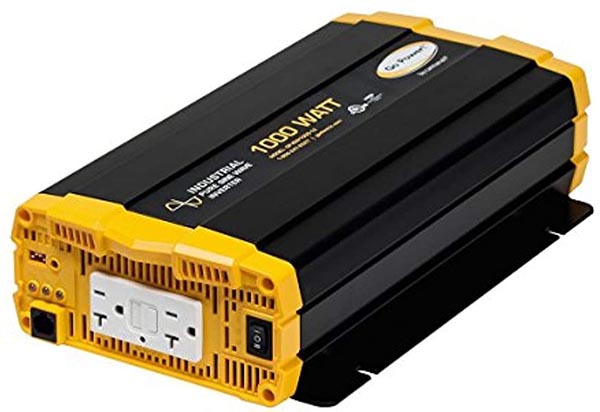 The Go Power! GP-ISW1000-12 Industrial Pure Sine Wave Inverter is our most rugged choice. Its aluminum frame weighs in at seven pounds, and the wide metal flanges allow for easy mounting. The overall width, including flanges, is 7.87 inches, and it’s 14.65 inches long. Impressively, the GP-ISW1000-12 is barely over three and a quarter inches thick. This slim profile makes it easy to position, despite its heavy-duty design. 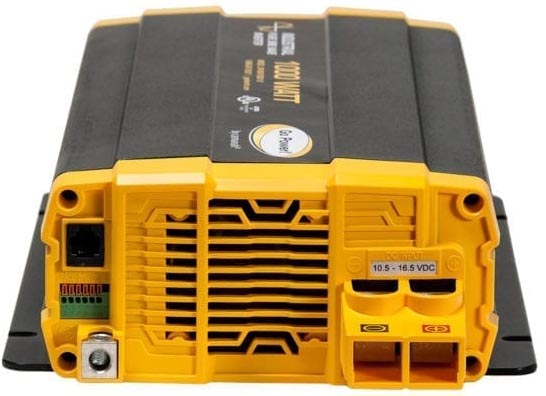 The GP-ISW1000-12 has all the same safety features as the Renogy inverter. What it doesn’t have is a USB port, because it’s made for commercial use. On the upside, it’s built to handle even the most extreme conditions. The high-powered internal fan can keep it cool during constant use under heavy loads.

Which one of these pure sine wave inverters is the best of the bunch? Here’s what we’ve learned today. We started out by reviewing the Victron Energy Phoenix 1200VA 12-Volt Pure Sine Wave Inverter. The Phoenix is a bit more powerful than our other options, with a 1,200-watt power supply. It’s also highly efficient, with a peak power of 2,200 watts and a standby load of only one watt. Not only that, but you can control everything from a tablet or smartphone. This makes it easy to monitor your power usage and make changes as necessary.

The Renogy 1000W 12V Pure Sine Wave Inverter is more specialized for automotive use. It’s compact and lightweight, so it’s easy to position just about anywhere in the vehicle. This isn’t to say it can’t be used at home. It can. It has a full suite of safety protections, including short circuit protection. The Renogy inverter is medium duty, suitable for regular use.

The Go Power! GP-ISW1000-12 Industrial Pure Sine Wave Inverter was our winner when it comes to durability. It’s designed for maximum cooling power, so it can handle heavy loads in hot conditions. The outlets have all the safety features you need, so there are no concerns there. And with 1,000 watts of power delivery, the GP-ISW1000-12 is plenty for most automotive and off-grid needs.