TechGuru May 25, 2021 Computers, Storage No Comments

In 1996, DVD discs took the world by storm. They allowed you to watch video in 480p, better quality than VHS tapes. They were slimmer, allowing you to fit more movies on the same shelf. And unlike VHS tapes, which wear out every time they’re played, a DVD could last for a century or more. If that wasn’t enough, DVD discs were easy to use for data storage. Meanwhile, anyone who’s ever worked with a tape drive can tell you how painful they are to use.

These days, Blu-Ray discs have supplanted the humble DVD for many purposes. If you’re buying a new movie, for instance, it’s almost certainly in Blu-Ray format. The reason for this is that Blu-Ray discs can provide 1080p video, or 4K for Ultra HD Blu-Ray discs. This keeps pace with modern televisions, whereas DVDs don’t. Blu-Rays also offer 10 times as much storage space as standard, single-sided DVDs.

That said, there are some reasons you still might want to burn DVDs. One is if you have old home videos or recorded movies from TV. If the original recordings were only in 480p, there’s no benefit to copying them to Blu-Ray. A DVD will get you the full resolution. Along the same lines, many data backup tasks don’t actually require a ton of data. Yes, a 50GB backup disc is useful if you’re backing up large video files. But many people’s backup needs are more modest. If you’ve got a bunch of photos, some PDFs of your tax forms, and a few other important documents, you’re set. And since DVDs are cheaper, you won’t be overpaying for basic data backup.

Today, we’re going to review three of the best blank DVDs for burning movies and files. We’ll begin with the Verbatim DVD-R 4.7GB 16x AZO Recordable Media Disc. This is a 16x disc with a lined, markable top surface. Next, we’ll look at the Optical Quantum 8X 8.5GB DVD+R DL. This is a dual-layer disc that provides twice the storage capacity of normal DVDs. Finally, we’ll examine the Maxell Rewritable Superior Archival Life 4.7Gb DVD+RW Disc. This is an archival-grade disc that’s designed for long-term storage. Which one is right for you? Let’s look a little closer, and see what we find! 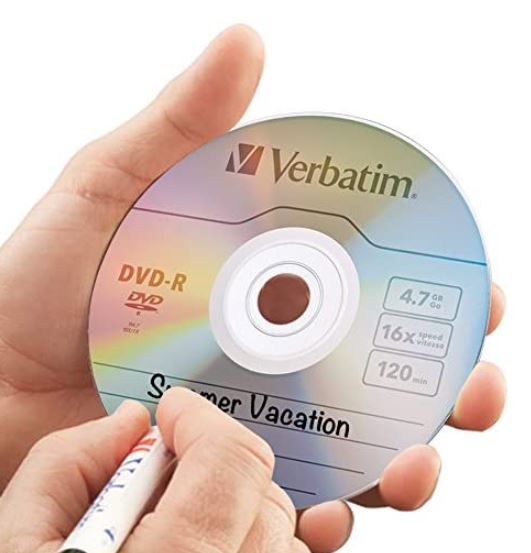 DVD-R vs DVD-RW vs DVD+R vs DVD+RW

When you buy DVDs – or DVD drives – you probably notice that there are various designations. Some DVDs are listed as DVD-R, while others are DVD-RW. Even more confusingly, some DVDs have a “+” instead of a “-“ in the description. What’s the difference? Does it even matter what you use?

Let’s start with the basics. The original DVD-R is a write-once format. You create a disc image with whatever files or video you want, and you burn the disc. At the end of the burn, the session is “finalized,” which means the data is locked in forever. The nice thing about DVD-R discs is that they’re compatible with almost all DVD players. Even if you’ve got a 15-year-old player, odds are good that a DVD-R disc will play in it. The downside is obvious. If you want to use a disc more than once, you won’t be able to.

DVD+R and DVD+RW are a bit more complicated. The “+” formats allow for faster writing, as well as for drag-and-drop composition. If you want to use one for backups, you don’t have to use special writing software in most cases. You can simply use the disc the same way you would a hard drive or a flash drive. The “R” and “RW” mean the same things as the “-“ formats. With DVD+R, you can only write a disc once, and the process needs to be finalized. With DVD+RW, you can use the same disc hundreds of times. Compatibility with “+” formats is a bit more spotty, particular DVD+RW. You’ll be just fine with most modern players. But if you’re using an old DVD player, you may run into trouble.

Finally, make sure your computer’s DVD drive is compatible with the discs you’re trying to use. DVD-R drives can only write DVD-R discs. DVD-RW drives can write only DVD-RW and DVD-R, while DVD+R drives will only support DVD+R and DVD-R. DVD+RW drives will be able to write to any kind of disc. 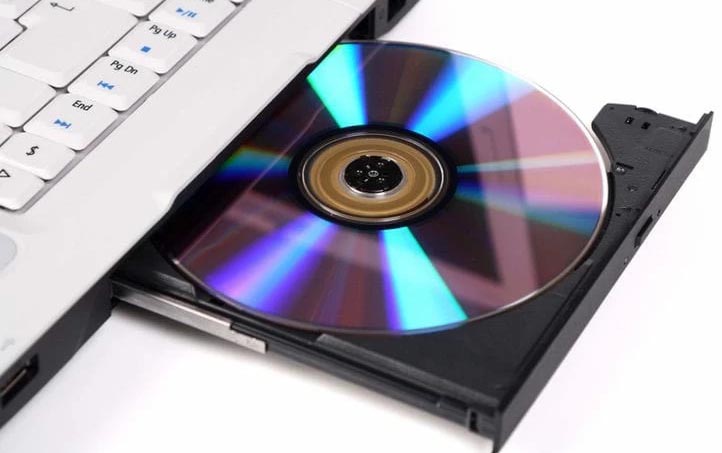 Another thing you’ll want to think about is how long it takes to write to a DVD. This will depend on the write speed of both the disc and the drive. Write speeds are measured in units of “x,” with multiples ranging from 1x to 16x. There are commercial writers that can go even faster, but we won’t be worrying about those. The point is that your maximum speed will be the lowest of either your disc or your drive rating. If you want to burn a 16x disc in a 4x drive, you’ll be able to do so. But you’ll only be able to do so at 4x speed.

So, what do these speeds mean in the real world? A speed of 1x is equivalent to 1.32MB per second of data transfer. Anything above that will simply be a multiple. The most common write speeds are 8x (10.57MBps) and 16x (21.12MBps). An 8x disc will take about 8 minutes to burn, assuming you’re filling the entire disc. Now, you might think that writing at 16x would only half the time – or 4 minutes. This is an intuitive conclusion, but it’s wrong. In fact, the drive doesn’t write at maximum speed the entire time. It will start slowly, speed up to maximum speed, and slow down again towards the end. Combine that with creating an image and finalizing, and the difference in speed isn’t as dramatic as you’d expect.

Not only that, but discs are more prone to error when they’re being written at maximum speed. For this reason, most people opt to use a speed slower than 16x. At 8x, you get nearly as short of a burn time, with relatively error-free writing. In theory, error-correction technology on your DVD player should render this difference moot. In practice, the fewer errors you have, the less likely you are to run into any issues. 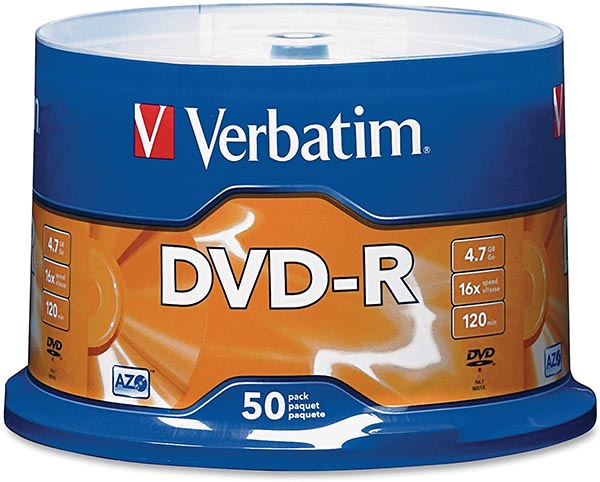 Verbatim is a well-known manufacturer not just of storage media, but also of drives. We’ve reviewed a number of their products before, including external Blu-Ray writers. Their Verbatim DVD-R 4.7GB 16x AZO Recordable Media Disc comes in a 10, 25, 50, or 100-pack. As their name implies, these are DVD-R drives. They can only be written once, and cannot be reused. That said, they can be read on pretty much any player. They’re also relatively affordable compared to other types of disc. 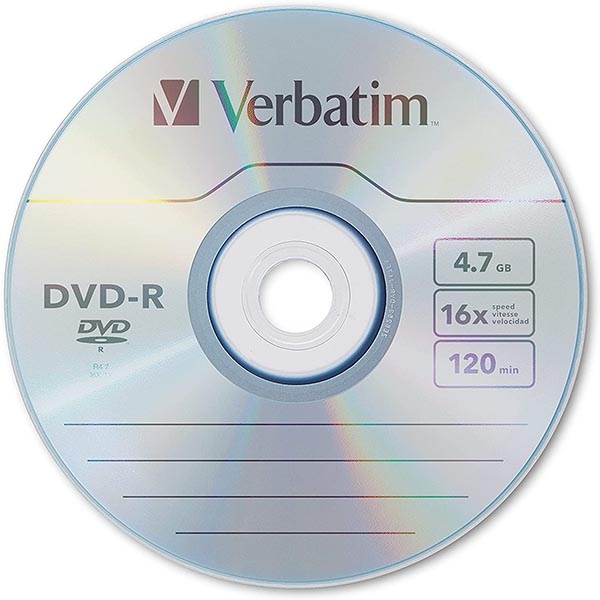 These are some of the more reliable 16x discs we’ve seen. Look, you’re always better off writing at slower speeds. But there are some times when that’s not practical. For example, suppose you need to make a run of 100 DVDs. At six minutes per disc, that’s 10 hours of burning. At eight minutes per disc, you’re adding 2 ½ hours! If you need to write at a full 16x, the Verbatim DVD-Rs will perform better than most. Their lower surface is treated with a specialized AZO recording dye, which minimizes errors. Meanwhile, the front side of the discs is about what you’d expect. It’s a silver surface, with a Verbatim logo at the top, disc info on the sides, and lines underneath. You can easily write on it with a marker, or apply an aftermarket DVD label. 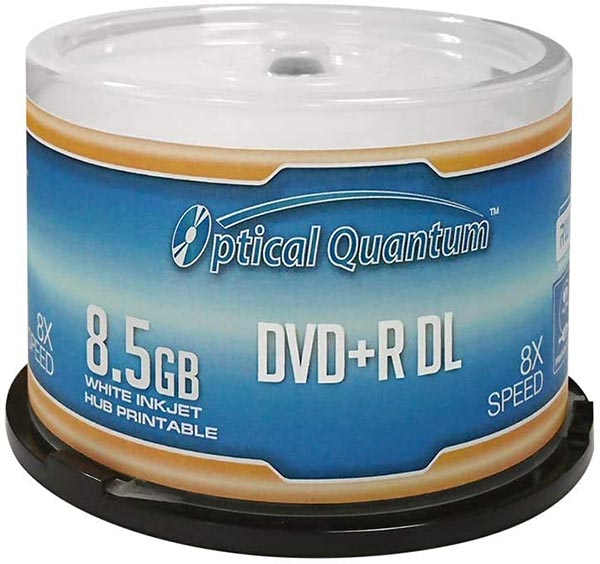 Optical Quantum specializes in producing good quality, low-cost storage media. We’ve reviewed their Blu-Ray discs in the past, and we liked what we saw. The Optical Quantum 8X 8.5GB DVD+R DL is a dual-layer DVD, which makes it unique on our list. Most DVDs have a single layer, and a capacity of 4.7GB. A dual-layer DVD, on the other hand, has two layers, which are written in opposite directions. This almost doubles their capacity, providing up to 8.5GB of storage per disc. Keep in mind that this requires a compatible drive. If you have a single-layer drive, you’ll only be able to use the first disc layer. You’ll also need to have either a DVD+R or DVD+RW drive. 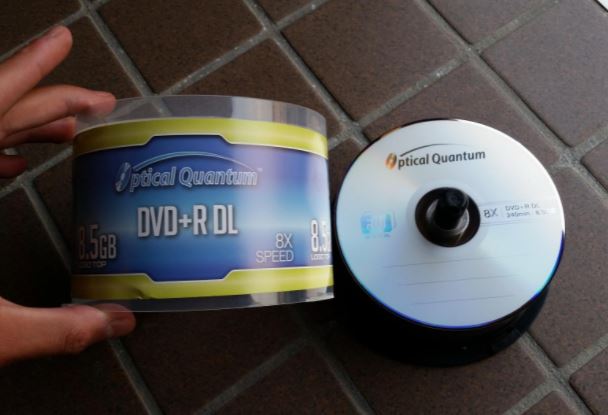 These discs have a write speed of 8x, which is what you’ll usually want to use anyway. They also come in a 50-pack. At first glance, the 50-pack looks a bit pricey, but remember that these are dual-layer discs. If you’re using them for backup storage, you’re literally getting twice the capacity. When counted by cost per-gigabyte, these are some of the cheapest discs around. They’re also available in two different variants. The first is a plain white version that’s designed for Inkjet DVD printers. The second is a lined version, designed to be written on with a marker. 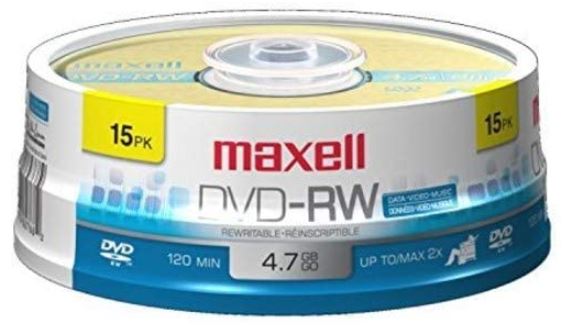 Maxell is yet another established manufacturer, with offerings that include high-quality blank CDs. The Maxell Rewritable Superior Archival Life 4.7GB DVD+RW Disc is exactly what it sounds like. These discs are engineered specifically to be as durable and long-lasting as possible. They can handle a minimum of 1,000 rewrites, and will remain readable for at least 50 years. This makes them ideal for long-term data backup, as well as for tasks like recording security video.

The maximum write speed is 16x, and the discs seem to work reasonably well at this speed. That said, keep in mind that slower speeds are always going to produce fewer errors. Unless you need to write at 16x, it’s smarter just to stick with 8x. The tops of the discs are lined, so they’re easy to mark. Alternatively, you can use third-party labels to keep your discs organized. One thing we should note is that the high-quality, archival-grade construction comes with a cost. A 15-pack of these discs costs as much as a 50-pack of many ordinary discs.

So, which one of these discs should you be using? Let’s quickly summarize what we’ve learned. We started out by looking at the Verbatim DVD-R 4.7GB 16x AZO Recordable Media Disc. This is a write-once disc that’s designed to write at a full 16x. Its dyed bottom minimizes errors, and the top surface is easy to label. For movies or long-term archives, look no further.

The Optical Quantum 8X 8.5GB DVD+R DL is an unusual set of discs in that they’re dual-layer. This makes them an excellent value if your drive is capable of writing to dual-layer discs. On the other hand, if you only have a single-layer drive, you’ll be overpaying for a feature you can’t use.

The Maxell Rewritable Superior Archival Life 4.7Gb DVD+RW Disc is the best choice for archival storage. These discs will last as long as 50 years, and can be rewritten over 1,000 times. To be fair, they’re a bit pricey, and you won’t be able to use them without a DVD+RW drive. That said, they offer unparalleled longevity, and can be used easily for recording security videos.

Ultimate Guide to the Best External Graphics Card …
May 28, 2019