Canned air is useful. But it’s also tremendously cost ineffective. For the price of a couple of cans, you can get a duster or vacuum that can create similar levels of air pressure on a permanent basis. Then you never have to worry about running out of canned air again, or feel guilty about using your air as thoroughly as you’d like.

Once you have a bottomless supply of air, you’re well on your way to being equipped for cleaning out almost any device you own, or almost any area of your home. Desktop computers, keyboards, speaker systems, or even dusty shelving.

Fortunately, you can find the most appropriate solution by running through some simple questions.

You have to ask yourself, what are the things you want to clean up, specifically? If you’re looking for a keyboard duster, then you won’t need super-high powered airflow. You probably won’t want to use a vacuum, either. Because you’ll have a much easier time hitting those hard-to-reach places with a blower.

If you’re dusting out the inside of a computer case, you probably care more about the longevity of your air than air pressure. In fact, any use of vacuums around PC components calls for caution because of the potentially static nature of what you’re doing, as well as the physical blowing forces which may act on your circuits or cables.

Vacuums work a little differently than dusters. If you end up selecting a device with vacuum capabilities, you’ll want to think about the filters it uses. Specifically, whether or not you’ll have to purchase replacements. More often than not, it’s possible to avoid these kinds of problems. 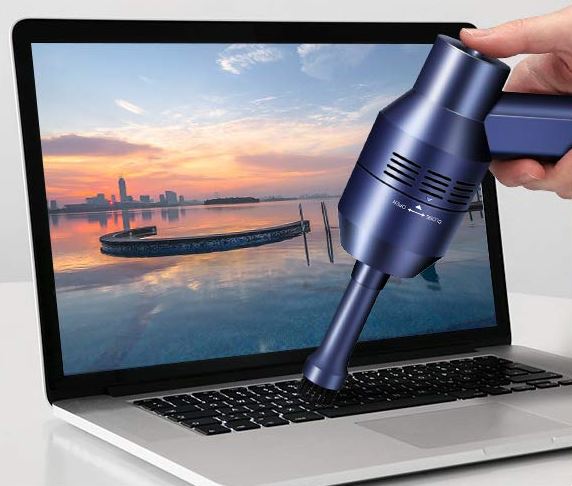 When you’re using canned air, you really only have one attachment nozzle. It’s typically a teeny-tiny straw. With dedicated equipment, you’re able to choose between a variety of different attachment nozzles. They’re made with differences in the width, length, and shape of the nozzle. And that can have an impact not only on the accessibility of airflow, but the speed at which the air moves.

When you have a device connected with a cord, you’ll find it’s generally going to provide a stronger output than a wireless device. But unless you’re trying to do some industrial scale cleaning, you probably don’t need that kind of stronger output.

For instance, if you’re simply trying to blow some air out of your PC case, or you’re cleaning up your keyboard, then you don’t have to pay special attention to the strength of the output. You could pick basically any duster or blower, provided it wasn’t total junk.

But if you do anticipate higher use levels of use or greater throughput from your cleaning device, then you will want to strongly consider a wired option. Wired/wireless hybrids are also a popular choice.

Being wireless has clear advantages, most of them don’t need a detailed explanation. Moreover, portable handheld models tend to have a better ergonomic design. But it’s still worth ensuring whatever model you pick is maneuverable, and its capabilities match your needs. 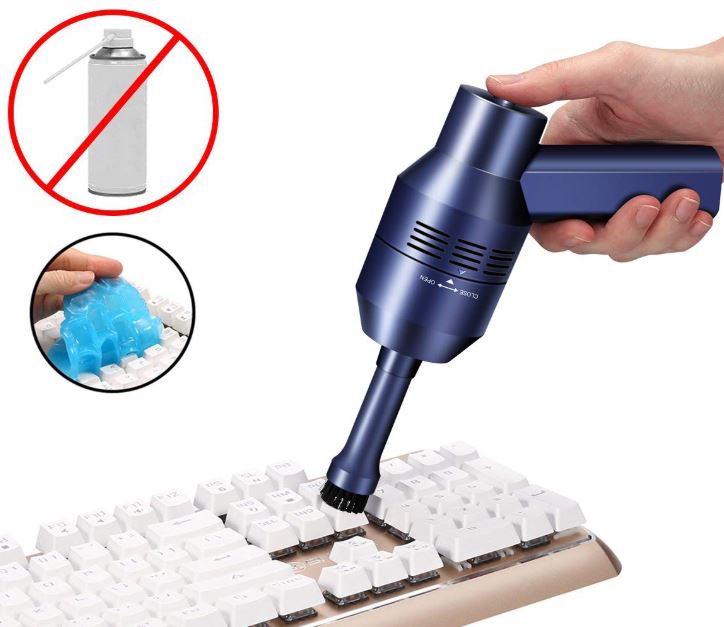 Though its name suggests this device was made specifically for keyboards, it has a degree of versatility that makes it suitable to a much wider variety of tasks. You might use it for cleaning out bags, dusting off cameras and stereo systems, or even cleaning out your car. That’s because the MECO Keyboard Cleaner is constructed around a 2000mAh battery, allowing for fully wireless operation.

If you don’t care to use the battery, or you plan on using the cleaner for longer than the battery will allow, then you’ll be relieved to know that you can use wired operation as well. Though the battery does provide roughly 50 minutes of pressurized air from a single recharge. 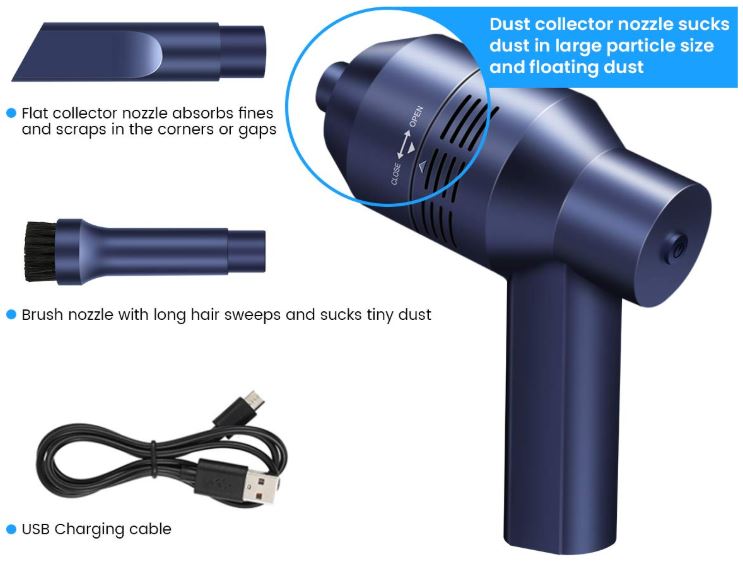 The MECO Rechargeable Mini Keyboard Vacuum includes two different nozzles, a generalized nozzle and a flat nozzle. Both were made specifically to reach into tight spaces, but the flat nozzle is particularly great for picking up small pieces of paper, dust, ash, and similar debris.

This equipment actually looks less like a duster, and more like a hot glue gun. The full body measures roughly 8.5 x 5.3-inches, and the handle stem is about three inches long. That’s more or less a perfect size for holding the unit.

The Mini cleaner and its attachments are both made from ABS plastic, which is impact resistant and handles heat quite well. Better still, many of the weaknesses of ABS plastic are totally negligible when used for a vacuum duster similar to this one.

You will want to recharge the vacuum about half a dozen hours before you intend to use it, at least if you intend to use it in wireless mode. Additionally, you’ll want to clean the mesh filter inside this vacuum every few weeks. Like any vacuum, it can become clogged with dirt and debris. 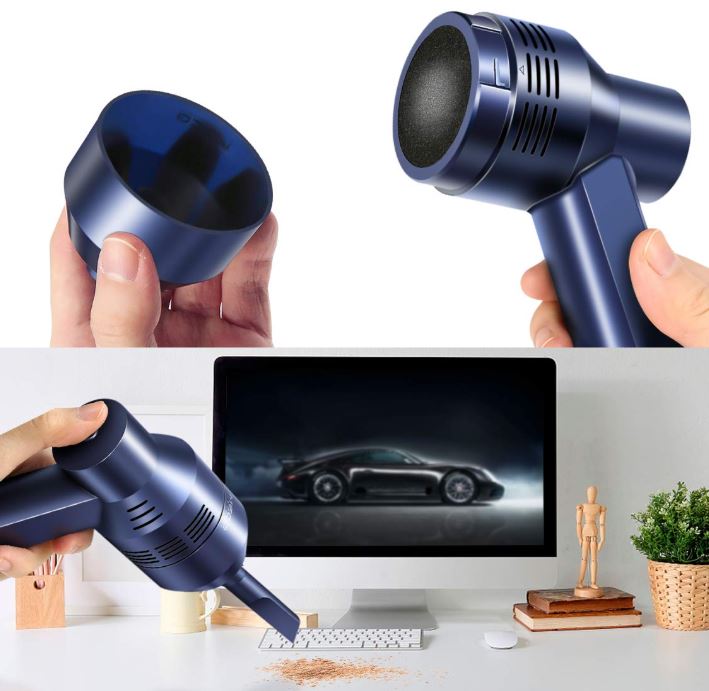 Fortunately, popping the MECO Mini Keyboard Vacuum open and fixing the problem is pretty simple. Their system lets you remove the included filter and wash it with water, then reuse it without replacement.

This machine is a bit on the noisy side, but not loud enough to be harmful to hearing use. That’s actually not something that can be said for all similar equipment, many of which operate at the threshold of noise which can eventually lead to hearing damage.

Finally, the MECO Rechargeable Mini Keyboard Vacuum Cleaner includes two sponge filters, one set of cleaning gel, and two nozzle attachments. The cleaning gel isn’t anything special, but it’s a non-offensive cleaner that’s safe to use on ABS plastic. You don’t want to use cleaners like alcohol because you’ll only scar the body of the unit. 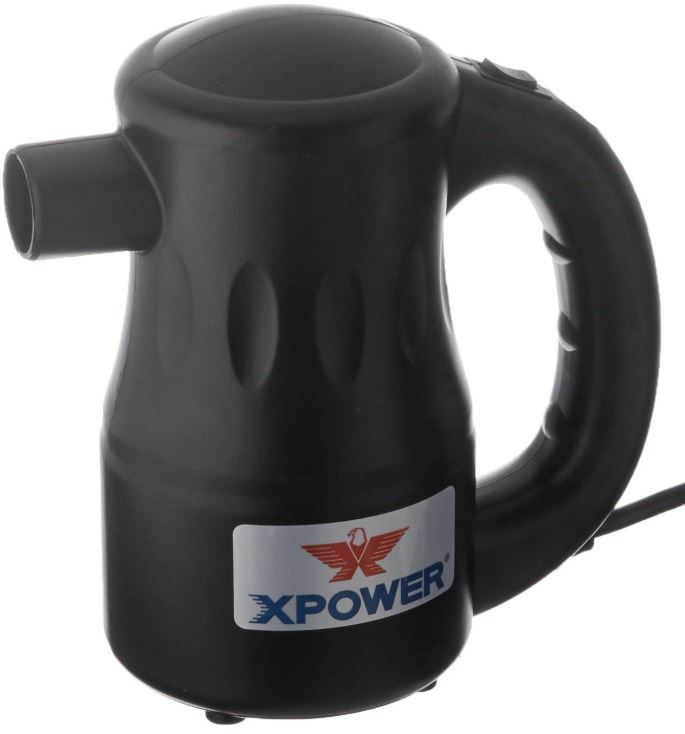 The XPOWER A-2 Airrow Pro is a grossly versatile air duster. And unlike many other dusters, it has power to match that versatility. In fact, from a mechanical standpoint, the A-2 is the most powerful duster on this list. Though it has a strictly wired design with no onboard battery, it makes up the difference by blowing that much harder.

Similar to the previous member of this list, the unit itself is constructed from ABS plastic, a sensible choice for its sturdiness. But ABS plastic does tend to develop a shine and glossy texture over time. That’s because it is literally polished by contact with human skin, and quite readily. 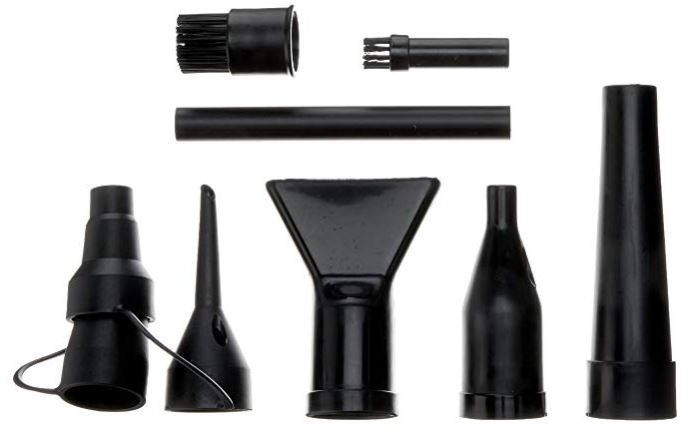 After a couple years of use, you might find the XPOWER A-2 becomes a bit of an eyesore around its handle. This is more of a problem for the A-2 than the MECO unit because matte black plastic makes this polishing effect particularly obvious.

It can be hard to predict which attachment you’ll actually need until you need it. That’s really the true strength of having eight nozzles. Basically, you have everything you need for almost any scenario. 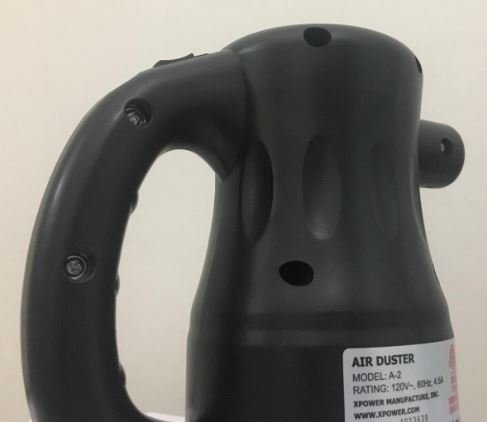 The permanently attached power cable runs about 10 feet long, the longest of any member of this list. Its brush motor is almost capable of delivering almost one horsepower, while drawing 4.5A current for a peak of 90 CFM airflow. If 90 CFM is too much for you, this unit also has two speed settings.

The classic XPOWER A-2 was only available in black, but in the time since, they’ve added sky blue and sea green. The colored versions would be a better choice for people who are worried about the polishing effect of ABS. The XPOWER A-2 Airrow Pro Electric Duster also has a one year limited warranty, and some common sense thermal protection and safety certifications. 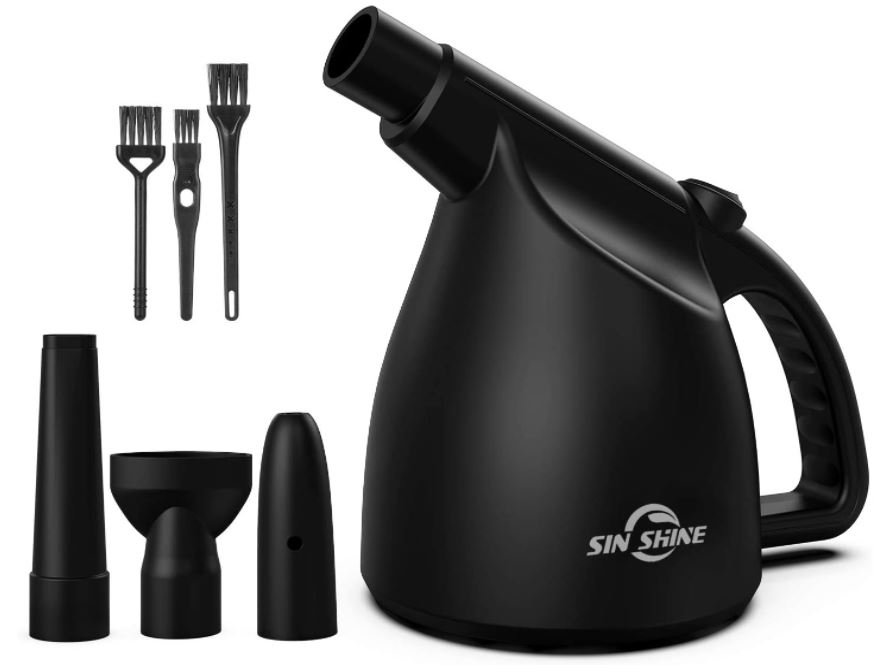 The EasyGo is a high pressure PC cleaner, which provides a steady stream of high-pressure air. It’s quite well suited to blowing debris, dirt, and dust. You might want to stop short of taking it out in your yard to blow around leaves, but it’s otherwise quite versatile.

That versatility is due to the 550-watt motor using 4A current, nearly as powerful as the A-2. Plus, that kind of power allows the CompuCleaner 2.0 to shoot out airflow peaking around 70 CFM. 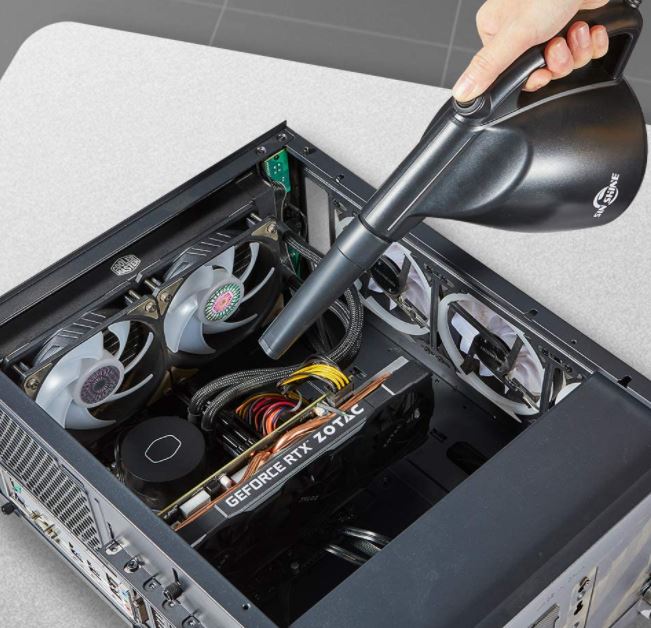 The CompuCleaner 2.0 operates from 120V wired connection, using its attached 9-foot cord. That cord doesn’t exactly compare with the reach of a vacuum cleaner, but it’s long enough that you probably won’t have to get an extension cord involved in your project. And once again, it’s nearly as long as the A-2’s cord.

The cleaner itself has the proportions of a handheld vacuum cleaner, roughly 9 x 9 x 5-inches, and it weighs just shy of two pounds. And the CompuCleaner 2.0 is available in either black or white, though the white version still uses black attachments.

The EasyGo CompuCleaner actually includes three attachment heads. One is a short attachment with a wide opening. It’s pretty useful for blasting a broad area with a steady stream of air, though you lose some of the pressure because of the wide dispersion.

The second attachment is like the standard attachment, but made lengthy. It’s good for getting into small spaces at a distance. The third and final attachment is only slightly larger than the stubby-and-wide attachment. This attachment terminates in a particularly small air hole, which allows for the full force of the 70CFM design to be felt. 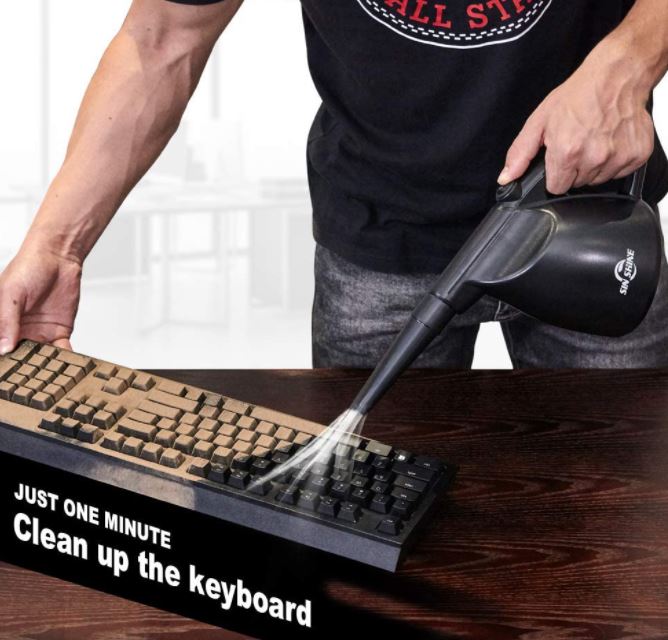 The CompuCleaner logo is shamelessly splattered across the front side of the unit, though they did stop short of placing their logo on both sides. While it’s in action, the loudness of this cleaner compares with a small vacuum. Not terrible, but not great either. To its credit, the cost of the EasyGo CompuCleaner compares with about 8 or 12 disposable cans of air. And that’s really what it’s trying to replace.

Choosing Between Three of the Best Keyboard Vacuums & Dusters

The SIN SHINE Compressed Air 3.0 is made rather specifically for cleaning electronics. The 70 CFM output is powerful enough for those kinds of tasks, though the airflow would best be compared to a can of air that’s approaching its final days of use. The handheld nature of this device is great, and getting three attachments is a nice bonus as well.

The XPOWER A-2 Airrow Pro Electric Duster is limited only by the fact it’s a wired device. If you’re looking for a strong duster, the A-2 isn’t quite as powerful as a can of air. But it’s about as powerful a cleaner as you can get without purchasing hilariously noisy or hilariously expensive industrial tier equipment. The eight included attachments might be overkill, but they don’t seem reflected in the A-2’s price.

Finally, there’s the MECO Rechargeable Mini Keyboard Vacuum. This device will actually suck-up debris instead of just blowing it around. The wired/wireless hybrid nature of this cleaner makes it perfect for a wide variety of different cleaning tasks, from keyboards to automobiles. It doesn’t have that much suction power, but relative to its price, the MECO is an excellent cleaner because it does more than spread around a mess.