The PlayStation 5 is the latest and greatest console from Sony. If you can get your hands on one, you’ll get access to the next generation of games. If not, keep on trying. Twitter is full of restock accounts who let you know when the major retailers are in stock. In the meantime, it’s never too early to start thinking about accessories. And if you’re one of the lucky folks who already owns a PS5, it’s definitely time to look at some extra gear.

It’s also important to have priorities, and to consider what you’re going to use most. If you’re not careful, you can end up overpaying for something you might be able to pick up later. For instance, many Xbox Series X customers are splurging on the external hard drive. This despite the fact that the system already has 1TB of storage, and no major exclusives.

One area it makes sense to invest early is in audio technology. The reason is that both Sony and Microsoft have failed to include support for Bluetooth headsets. With the PlayStation 5, you get a beautiful, redesigned wireless controller. But if you want to use a headset, you’ve got to physically plug it into the controller. This decidedly last-gen approach to audio can leave you in a bind, particularly if you play a lot of multiplayer. But there’s a solution: use a Bluetooth adapter. In the past, we’ve reviewed Nintendo Switch Bluetooth adapters for connecting your headset to the Switch. Now, we’re going to take a crack at PS5 Bluetooth adapters.

We’ll start our list with the OLCLSS USB Bluetooth Adapter. This is a tiny USB Type-A dongle that comes with a Type-C tether and a 3.5mm mic. Next, we’ll look at the 1Mii MiiLink. This adapter is optimized for the Nintendo Switch, but works on PlayStation 5 as well. More importantly, it lets you connect two headsets simultaneously. Finally, we’ll review the CHASDI Mini Bluetooth Dongle. This is another flat, Switch-style dongle that includes a 3.5mm mic. Which one is going to be the best choice for you? To find out, we’ll need to dig a little deeper. Let’s go beneath the surface, and see what we uncover!

Before we go any further, let’s talk about what to look for in a PlayStation 5 Bluetooth adapter. Simply put, you can’t just plug any old adapter into your PS5 and expect it to work. There are a few reasons for this. Here’s a quick overview of what you need to consider.

First, you need to make sure you’re using an adapter that plugs into a USB Type-C port. There are many Bluetooth adapters out there that use USB Type-A, for instance. This is fine for controllers, but the PlayStation 5 requires a Type-C connection for audio. Similarly, there’s a whole marketplace of Bluetooth adapters that utilize a 3.5mm aux port. These are useful for many applications, particularly for older cars that don’t have Bluetooth connectivity. But they’re not going to do you any good on a modern game console.

Along the same lines, it’s important to find an adapter that has the right form factor. For instance, there are many larger USB Bluetooth adapters that are built like dongles or antennas. For one thing, most of these don’t use USB Type-C to begin with. For another thing, they’re often too large to be practical. The last thing most gamers want is a big old antenna sticking out of the back of their console. Those big antennas might have longer range, but a small adapter is better suited for most gamers.

The final important consideration is firmware and codec support. Bluetooth can be used for data, connectivity, or audio. The type of connection makes a big difference when it comes to audio quality and latency. An adapter that’s optimized for high rates of throughput, for example, might not have the best latency. Similarly, one that’s designed for devices like mice and keyboards may only deliver tinny audio. By using a dedicated game console adapter, you get a Bluetooth adapter that’s optimized for the highest quality audio. You also get one with low latency that’s well-suited for online chat. Now, let’s get on with our reviews! 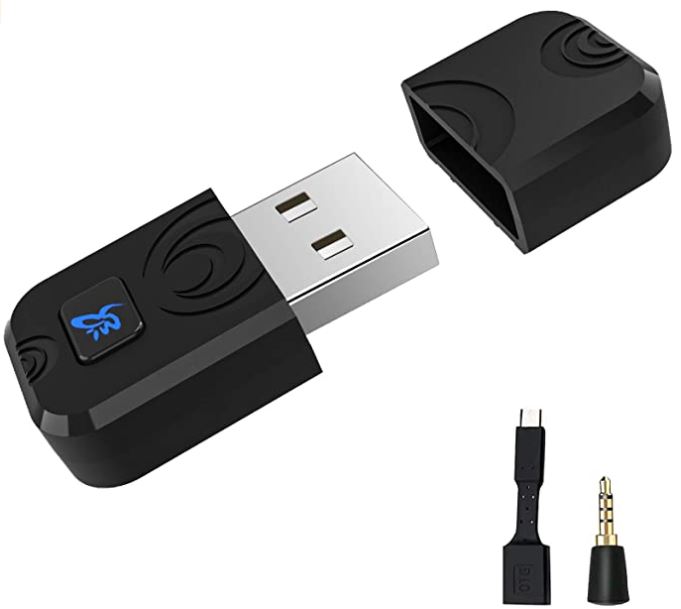 The OLCLSS USB Bluetooth Adapter is a small, USB Type-A dongle that’s barely larger than a mouse dongle. When it’s plugged into the back of your console, it will protrude by less than half an inch, perfect for tight spaces. It’s also very well-engineered. The plug is constructed from silicon alloy steel, rather than cheaper alloys. This means it can take a beating, and will last for years longer before wearing out. Along with the tiny dongle, you also get a short, three-inch USB to USB Type-C tether. This allows you to plug the OLCLSS adapter into systems like the PlayStation 5 that require a Type-C connection. 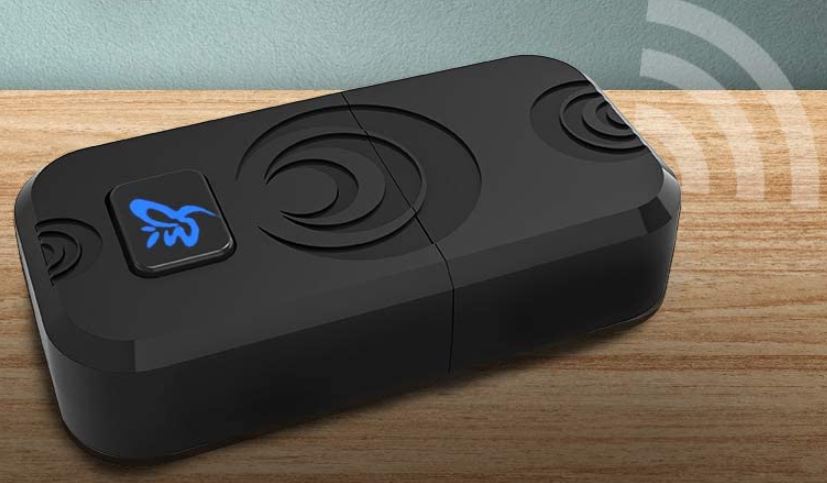 The signal range of the OLCLSS adapter is rated at 10 meters, or roughly 33 feet. This is more or less standard for Bluetooth 5.0, but it assumes a clear signal. Range drops off considerably if you walk around a wall, for instance. But that’s not much of a concern for game headsets. After all, you’re presumably in the same room as your console while you’re using it. The signal is high-quality and low latency. Audio is perfectly synced with video, and you can hear as much detail as your headset will produce. 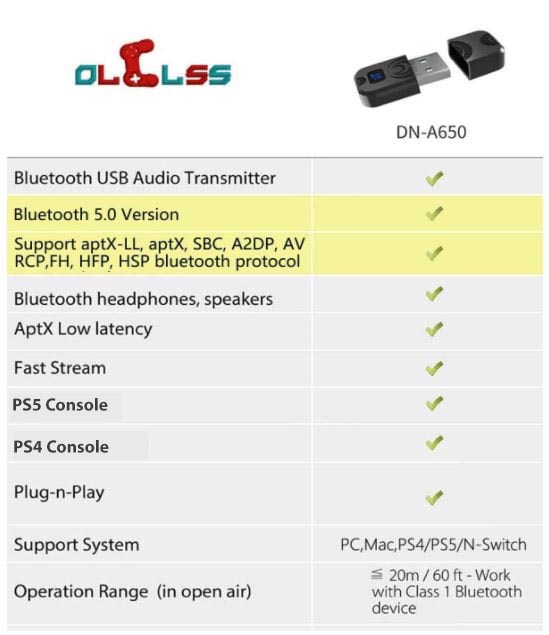 That said, connectivity can be a bit twitchy. In order to pair a headset, the adapter must be plugged into the PS5 during bootup. If you attempt to plug it into a running console, your headset will still pair, but you won’t hear anything. This isn’t normally a big deal. However, if your headset batteries die and you need to reset the connection, you’ll have to restart your console.

Another irritating feature of this adapter is the way it handles in-game chat. The PlayStation 5 is a brand-new system, and most manufacturers can’t yet make a fully-functional audio dongle. Specifically, the OLCLSS only handles incoming audio, not outgoing audio. If you want to chat with your friends, you’ll need to plug the mini boom mic into your controller’s 3.5mm jack. This isn’t a big deal in and of itself, but the nature of the design is such that the audio quality is poor. It picks up a lot of background noise, and doesn’t always capture your voice well. 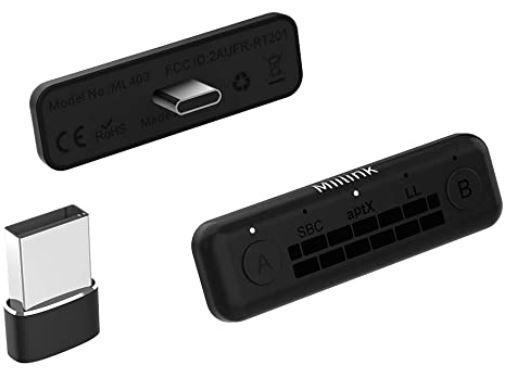 The 1Mii MiiLink comes from a reliable manufacturer. In the past, we reviewed their long-range Bluetooth adapter for televisions. We liked its performance, so we were excited to take the MiiLink for a test drive. As its name implies, the MiiLink is designed primarily for the Nintendo Switch. In fact, it has an extended USB Type-C plug that’s designed to allow for a Switch case. That said, there’s no reason it can’t be used with a variety of other devices. In fact, it will work with any device that accepts a USB Type-C Bluetooth audio connection. In addition, there’s a Type-C to Type-A adapter for plugging into Type-A devices. This is useful if you have a PC with no Type-C port, or if you want to play in a docked Switch. 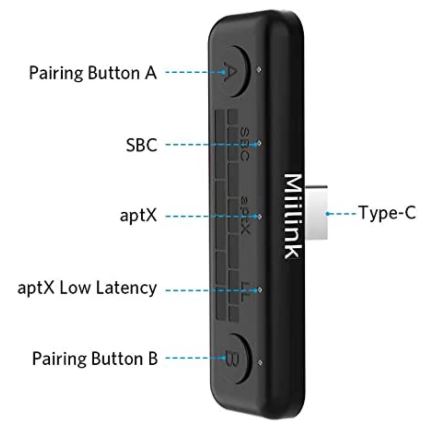 The adapter itself has a flat, bar-like shape that’s designed to sit flat against a Nintendo Switch. This means it will protrude by about a millimeter on the PlayStation 5. It’s not a huge deal, but it’s noticeable. The reason for this bar-shaped design is that the MiiLink has to show you a little more information than most Bluetooth adapters. There are two sets of lights, one to the left and one to the right. These let you know the status of both connections. There’s also a row of lights in the center that let you know what audio codec is being used. This is a unique feature we haven’t seen before, but it’s a nice touch for the true audio nerds out there. 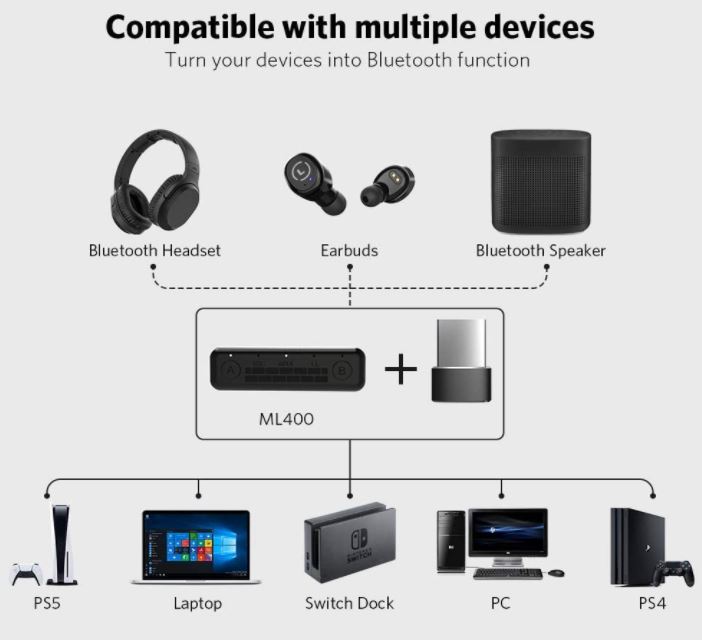 As we alluded already, this adapter allows you to connect not one, but two wireless headsets. With the days of split-screen gaming firmly in the past, you may never use this feature. But it’s a great touch for watching movies with a friend or partner. You can stay up late and enjoy proper stereo sound without waking up your kids with a full-sized sound system. The audio is also low-latency, so it’s always in sync with the video. Not only that, but it supports chatting in both directions on the PlayStation 5. This is a stellar feature, virtually impossible to find unless you buy a branded PlayStation headset.

The CHASDI Mini Bluetooth Dongle is somewhat of a cross between the previous two adapters. Like the MiiLink, it has a bar-shaped design. On the other hand, its connectivity is more in line with what the OLCLSS is offering. The unit itself is wide and flat, and plugs directly into a USB Type-C port. It can be plugged into the back of a PlayStation 5 or PS4, as well as into a Switch controller or PC. Moreover, there’s a small Type-C to Type-A adapter included in the package. This means you can use the CHASDI dongle with pretty much any game console or computer, barring Xbox systems. 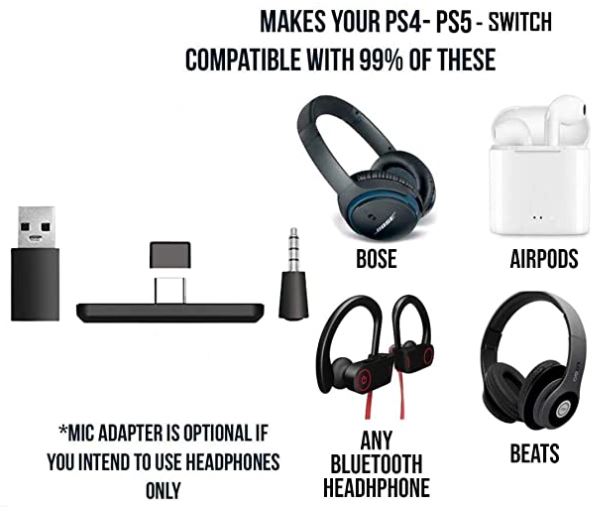 The connection is clean and clear, and operation is plug and play. It’s easy to hear your teammates, your music, or your movie. That said, you need to rely on a small boom mic for outgoing chat. As with the OLCLSS adapter’s mic, the results here are hit-or-miss. On the one hand, you get access to in-game chat without the need for a wire. On the other hand, you pick up a lot of unwanted background noise. This can be a non-issue or very annoying, depending on how loud your environment is. The CHASDI dongle also comes with a six-month manufacturer’s warranty. This isn’t a very long period of time. However, it should be long enough to know if there are any manufacturer’s defects.

So, which PS5 Bluetooth Adapter is the best one for your needs? A lot depends on what exactly you’re trying to achieve. We started out by reviewing the OLCLSS USB Bluetooth Adapter. This adapter has wide compatibility with a variety of game systems. It also provides very low latency. On the other hand, the boom mic input isn’t ideal. If you’re primarily looking for in-game chat performance, you’ll want to look elsewhere.

The 1Mii MiiLink is the ideal choice if chat is what you’re looking for. Because it supports two-way communication, you can freely chat with your friends without a secondary mic. Not only that, but it allows you to connect two headsets at once. The only downside is the wide, flat design, which may be off-putting if you want a more traditional dongle.

Last on our list was the CHASDI Mini Bluetooth Dongle. This is a bar-shaped dongle that also uses a boom mic for its audio input. It’s a solid choice if you want to use your adapter with a Switch as well as a PS5. That said, if you’re only playing on the PS5, one of the previous two options will be preferable.